How is a Tel (mound, heap) constructed? What is its features?

This page describes the birth and death of an archaeological Tel (mound). Most of the major Biblical sites were built as a fortified city, and their remains can be find in the ruins of the Tels. There are hundreds of sites with the prefix name of “Tel” or “Tell”, most of the ancient sites, but some (like “Tel-Aviv” or “Tel-Hashomer”) are modern cities or villages.

In 2005 UNESCO listed the Biblical Tels, as a World Heritage site.

Many of the ancient Biblical sites were located in man-made hills, which were fortified and equipped with water supply, gates, high walls, and other protection measures. The Tel was a usually a city, and before the Israelites each such city had a King. The city contained the palaces and houses of the citizens, as well as their armies.

Around the city were villages and the houses and farms of the farmers that worked for the city. When there was a threat or war the population centered in the city and defended themselves behind the walls.

There are hundreds of such Tels in Israel and the middle east. Their sizes ranged from small to large (like Megiddo).

Birth of the Tel:

The original city was a natural hill, which was located at a strategic location such as the crossing of a river, on the side of a major road, or on a highly defend-able location. Then, the location would have been reinforced by raising the slopes of the hill by accumulating earth on top of the hill and building high walls with field-stones or sun dried mud bricks. After a war, the city was leveled by fire or deliberate destruction, and the first level would have been created. After this destruction, a new city was reconstructed on top of this layer.

This cycle would repeat again and again. The Tels are actually made out of a number of layers of construction that accumulated over the years, after each layer was grazed or burnt down by the conquering armies. At a rate of destruction every 100 years or so, many layers have been accumulated, and the height of the hill grew from one layer to the next.

The sites were build over and over again since there was an advantage to continue to revive the ruined city in its original location:

Some Tels reached 20-30 layers over the 25 centuries of history. The Archaeologists can later slice them, examine the remains along the cut wall (examining the stones, ceramics, bones and coins), and read them like a history book.

Death of the Tels:

Eventually, the Tels were abandoned since they were limited in size and the population increased in sizes. The water supply could not support a larger city, and the real estate was limited. They normally relocated to a site nearby and built the new city on a larger site, usually on the higher hills around the original city. This happened around the 3rd century BC in the Hellenistic period after the land of Israel was reclaimed by the returning exiles. The majority of the Tels lasted from the 20-12th century BC until the 5th-3rd century BC.

Some Tels died earlier, such as after the fatal Assyrian assault in 732 BC. An example of an earlier demise is Tel Lachish.

After the old Tels phased out, they continued to be used as secondary sites, used as watch towers or fortresses for small military units due to their strategic location, heights and fortification. For example, the Crusaders reused Tel Yokneam or Beit-Oren.

Here are some examples of Tels, all within 6 KM distance and along the main North-South road. All three were conquered in 1468 BC by Egyptian Pharaoh Thutmose III as part of his intrusion into Canaan.

(a) Tel Maamer (Biblical Geva) is located near mount Carmel, on the banks of the Kishon river. It has an upper city (on the left side) and a lower city (right side). 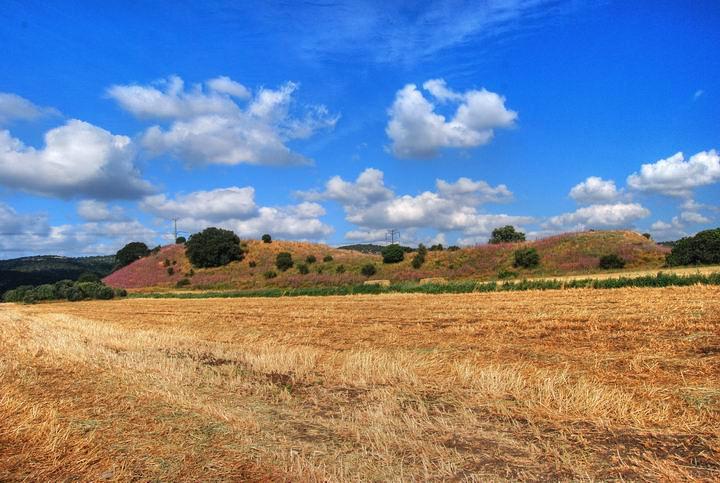 (b) Tel Kassis, near Yokneam, may be Biblical Khelkat. The Kishon river flows along the Tel, and provided it with water supply and a wet moat, which was part of its defense line. Above the creek are the steep walls, part of the glacis that was constructed in order to make it difficult for the attackers to climb up and into the city, and was the second line of defense. 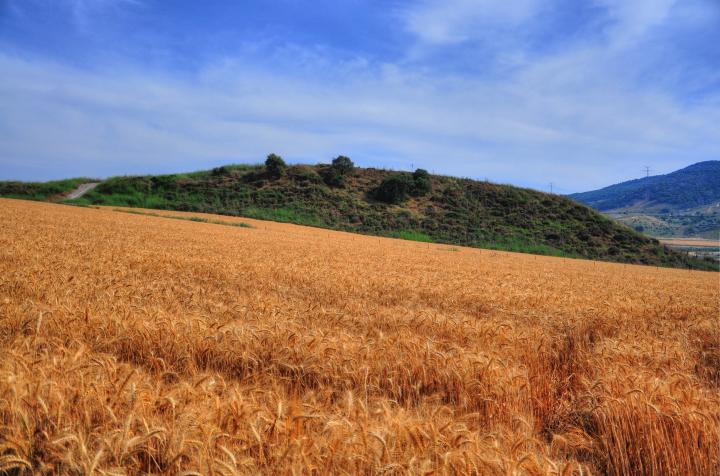 Tel Beit She’an (Beth Shean) was a major Biblical city, located in the center of crossroads between the Jordan valley and the Jezreel (Yizreel) valley. The ancient city thrived from the third millennium BC until the Hellenistic period in the 3rd  century  BC. 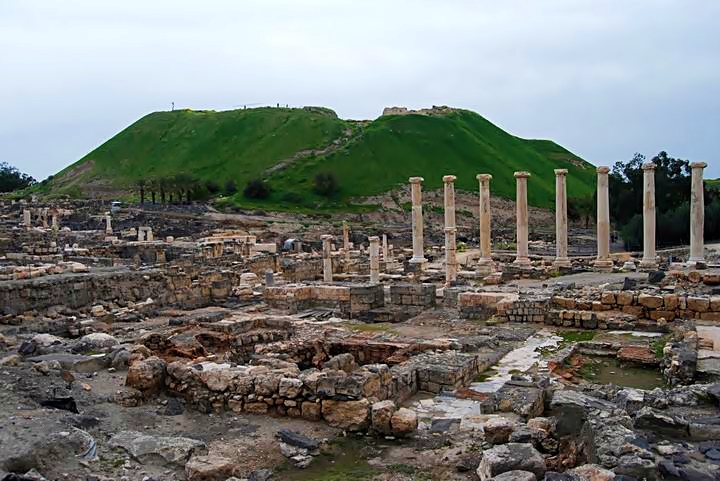 Phases of a Tel:

The following animation shows a typical process of the construction of a typical Tel. (to start from the beginning, hit F5 – refresh)

Sample of Tels that are featured in BibleWalks:

The word “Tel” is written 6 times in the Hebrew Bible, and is translated in KJV as “heap”.

This text describes the Tel as a ruined city. The Bible commanded to burn down cities of evil people, and turn them into a hill (Tel) of ashes.

“And thou shalt gather all the spoil of it into the midst of the street thereof, and shalt burn with fire the city, and all the spoil thereof every whit, for the LORD thy God: and it shall be an heap for ever; it shall not be built again.”

Joshua followed the Bible directive, and burnt down the evil city of Ai:

“And Joshua burnt Ai, and made it an heap for ever, even a desolation unto this day”.

Tel-Aviv is the 2nd largest city in Israel. It is not a Tel, and only inherited a name from the Bible. The name appears in Ezekiel as Tel-Aviv in Hebrew (“TelAbib” in KJV bible), and means “the hill of spring”.

” Then I came to them of the captivity at Telabib, that dwelt by the river of Chebar, and I sat where they sat, and remained there astonished among them seven days”.

Both books have the same text. The Hebrew text reads “Tel Melach” which is the hill of the salt.

“And these were they which went up from Telmelah, Telharsa, Cherub, Addan, and Immer: but they could not shew their father’s house, and their seed, whether they were of Israel:”

Jeremiah gives a prophecy that Rabat Amon (today, capital of Jordan) will be perished:

“Therefore, behold, the days come, saith the LORD, that I will cause an alarm of war to be heard in Rabbah of the Ammonites; and it shall be a desolate heap, and her daughters shall be burned with fire: then shall Israel be heir unto them that were his heirs, saith the LORD”.

The word “Tel” (or “Tell”) is a root name, and has many derivatives in Hebrew:

Tell – has the same meaning in Arabic.