This page is a gallery  of the Biblical sites that were selected by BibleWalks.com staff and readers as the “site of the month” during year 2015.

Ruins of an impressive Crusaders fortress located on a high cliff above above the northern Jordan valley. 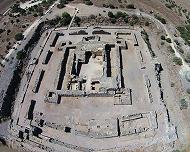 Ruins of Hasmonean and Herodian palaces built in the second temple period, in the southwest area NT of Jericho.

(Josephus Flavius Wars 4, 8: 2): “There are in it many sorts of palm trees… pronounce this place to be divine…”.

St. George Koziba is a cliff hanging Byzantine monastery in the valley of Wadi Qelt, near Jericho.

Ruins of a Biblical city on a high hill in western Judea.

Joshua 15:10:  “And the border … passed along unto the side of mount Jearim, which is Chesalon, on the north side…”

An important Biblical city, stands in the entrance of a mountain pass through Mount Carmel.

The convent is located near the Basilica of Annunciation. Under the courtyard are archaeological findings dated to the 1st Century.

June  2015 Convent of Sisters of Our Lady of Zion

A walled 19th Century monastery  built on the west hill of Ein Karem.

Tel Tanninim (“Crocodiles mound”) is the ruins of  the city of Crocodilopolis, situated at the mouth of Tanninim stream. Nearby is a fishermen’s pier, village and beach.

Ruins of a Roman fortress and Byzantine monastery in Western Samaria.

A Greek Orthodox church with remains of the most important Christian soldier-saint.

Ruins of an ancient Canaanite and Philistine city on the Besor brook, identified as Yurza.