This page is a gallery  of the Biblical sites that were selected by BibleWalks.com staff and readers as the “site of the month” during year 2007.

A geological, nature and history desert park, the center of ancient Egyptian copper mines. In the site are mining workshops, camps and installations, shrine and rock drawings from the 13-12th century BC.

Josephus Flavius, War 2:  20: 6: “…in Gaulonitis he fortified Seleucia, and Sogane, and Gamala”

One of the most holiest churches, located in Jerusalem at the traditional site of Golgotha – the place of Jesus Crucifixion and burial. 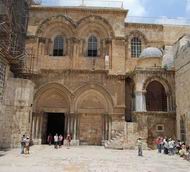 Matthew 27: 33, 60: “And when they were come unto a place called Golgotha….And laid it in his own new tomb, which he had hewn out in the rock: and he rolled a great stone to the door of the sepulchre, and departed”

Ruins of  a 5th century AD church and monastery at the traditional location of Jesus miracle at Gadarenes/Gergesa – healing the madman, driving out his devils into a herd of pigs who then drown in the lake.

Mark 5: 13: “And the unclean spirits went out, and entered into the swine: and the herd ran violently down a steep place into the sea…”

Ruins of a remote 13th century Crusaders castle located in the heart of the nature park of Kziv creek.

The fabulous Saint Peter in-Gallicantu Church is built in the slopes of mount Zion. According to tradition, this was the place of the palace of high priest Caiaphas. Its name is given after the story of Peter’s triple denial of Christ and the cock crowing twice. 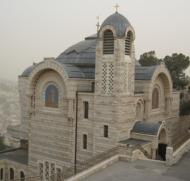 Mark 14: 72: “And the second time the cock crew. And Peter called to mind the word that Jesus said unto him, Before the cock crow twice, thou shalt deny me thrice. And when he thought thereon, he wept”.

Ruins of  a Roman/Byzantine  town, located above the north side of sea of Galilee, and is referred in the new testament as one of the cities condemned by Jesus.

Matthew 11 21-22: “Then began he to upbraid the cities wherein most of his mighty works were done, because they repented not: Woe unto thee, Chorazin!…”

Tell Hazor is one of the largest, most important biblical sites in the Canaanite and Israelite periods. The bible gave it the title: “the head of all those kingdoms”.

Joshua 11:10: “And Joshua at that time turned back, and took Hazor, and smote the king thereof with the sword: for Hazor beforetime was the head of all those kingdoms.”

The site is situated on the gateway on the road linking North and South of Israel, about 30 Km south-east of Haifa.  The archeologists uncovered 26 layers of ancient cities, starting before the bronze age (4000 BC) until the Greeks (4th century BC).

1 Kings  9-15: “And this is the reason of the levy which king Solomon raised; for to build the house of the LORD, and his own house, and Millo, and the wall of Jerusalem, and Hazor, and Megiddo, and Gezer.”

A pictorial display of all sites can be seen in the Sites Galleries.

The most recent  sites can be seen in the Last Added page.