This page is a gallery  of the Biblical sites that were selected by BibleWalks.com staff and readers as the “site of the month” during year 2014.

An important  Canaanite and Israelite city  in the northern part of Israel.

2 Samuel 20:15: “And they came and besieged him in Abel of Bethmaachah.

The fortress of Migdal Afek controlled the narrow pass of Via Maris.

Wars 2 19 1: “…a great body of Jewish forces gotten together in a certain tower called Aphek”

Ashdod Maritime (Azotus) was the ancient harbor of the city of Ashdod. It is located in the sand dunes on the southern shore of Ashdod.

An important port city, with 4,000 years of history.

Hebron is one of the Holiest ancient cities in the Holy Land, and the place of the burial cave of Patriarchs and Matriarchs.

2 Samuel 2:11: “And the time that David was king in Hebron over the house of Judah”.

Jisr e-Zarka is an Israeli Arab town located north of Caesarea. Nearby  Tel Tanninim (“Crocodiles mound”) is the ruins of  the city of Crocodilopolis.

Tel Arad National park consists of  the ruins of a large walled Canaanite city and  fortresses dated to the Israelite Kingdom period.

Numbers 21:1:  “And when king Arad the Canaanite… heard tell that Israel came by the way… then he fought against Israel…”.

Remains of a Roman and Byzantine period village. Identified as Kerioth, birth place of Judas Iscraiot.

Remains of an ancient  village, dated to the Israelite and Byzantine periods.   Ruins of a synagogue, fortress and agriculture installations.

Remains of an ancient village, located on a rocky hill in the southern Judean hills.

Central water drainage system of the second Temple period, an underground tunnel connecting the west side of the temple mount to the area of the Shiloah pool. 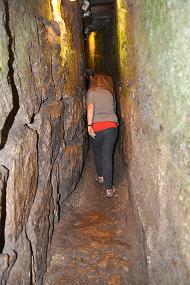 National park, with ruins of an Israelite Kingdom fortified administrative city, located between the Be’er Sheva and Hebron streams.

Genesis 26:33: “And he called it Shebah: therefore the name of the city is Beersheba unto this day”.

Most popular sites:  Most Popular.