Ruins of a second temple period village in the Judean foothills region, south of the valley of Elah.

Horvat Shu’a is an archaeological site, situated on a hill on the southern bank of Nahal Shu’a. This site is located 1km east of Moshav Tzafririm, within the Adullam-France National Park, in the area of the low hills (Shephelah) of Judea. Its Arabic name is Kh. Umm el Loz – “the ruin with the Almonds”.

On the summit of the hill are residential complexes with hewn caves, cisterns, installations, columbariums, and a well. The site, covering an area of 5 dunam, was settled from the Hellenistic period, Roman and Byzantine periods. Hiding complexes of the Bar-Kochbah revolt indicate that it was a Jewish village.

The following aerial view shows the area of the ruins.

Access to the site is from Highway #38 from a park road that starts near Moshav Tsafririm. Follow signs to Horvat Midras, but pass the turn to Midras, continuing 1.5km until a turn north to the site near a junction east of Matzad Hakhlil. A dirt road leads up to the ruins. 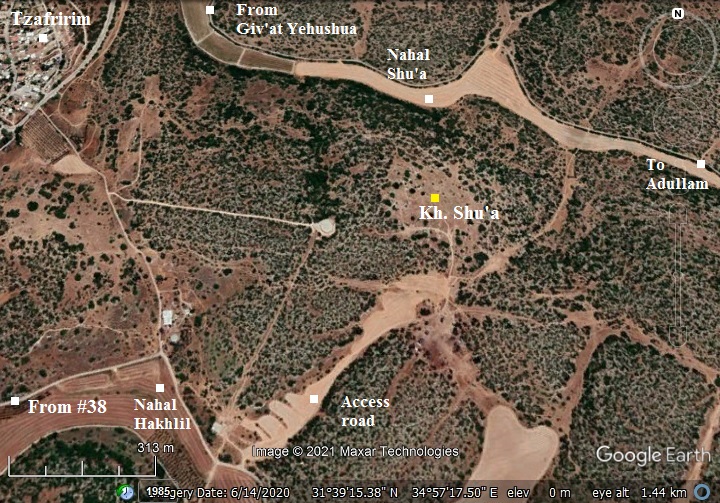 According to ceramics survey, installations and caves, the site was settled during the Hellenistic, Roman and Byzantine periods. The proximity to other villages of the period, and presence of hiding complexes of the Bar-Kochbah revolt, indicate that it was a Jewish village.

Its Biblical name was not yet identified. The site was named in Modern times as the ruin of  Shu’a. Modern Hebrew names of sites in this area are based on Biblical persons associated with the area of Adullam. In this case: Shu’a. Shu’a was the father of Judah’s wife, who was born and lived in this area, and gave birth to his sons – Er, Onan and Shelah. Genesis 38 1-2:

A map of the cities and roads of the Iron Age period is here. The site is located near Aczib (Achzib) which is identified as Tel Lavnin – a nearby ruin of the same period. It is south west of Adullam and south of Socoh in the valley of Elah. 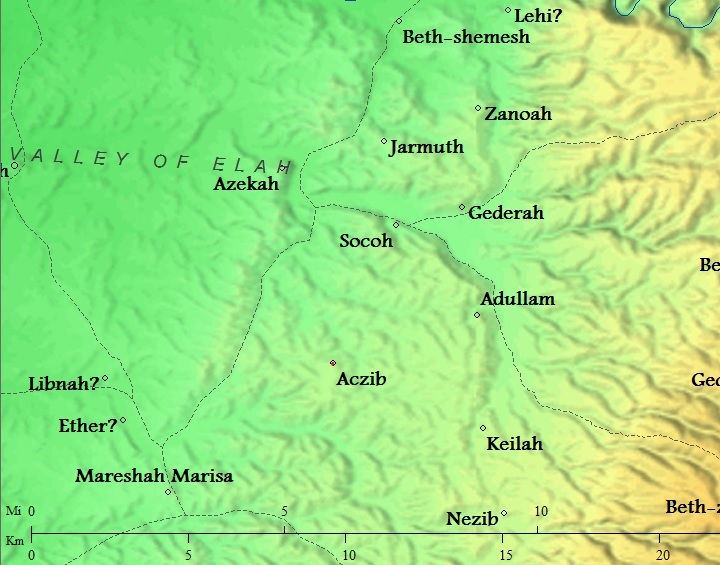 Cities and roads around Shu’a (near Aczib) – during the Canaanite, Israelite periods up to the Hellenistic period – Bible Mapper 3.0

Horvat Shu’a is located near another village of the same period – Horvat Ethri, which is 1.5km south east. Sections of a road were exposed between the two villages.

Hiding complexes of the Bar-Kochbah revolt were found on the hill.

During the second (Bar Kokhba) revolt in the 2nd century AD, Jewish residents across most of the villages in Judea tried to save themselves by constructing underground hiding places. Most of these rock cut tunnels and chambers were constructed under or near the residential buildings. The Roman historian Cassius Dius wrote about this (Historia Romania, 69, 12, 3):

They added a short review of the site, describing findings that are same as another site that they reviewed (Volume III, sheet XXI, p. 371): “Cisterns, caves, ruined walls, foundations and heaps of stones”. 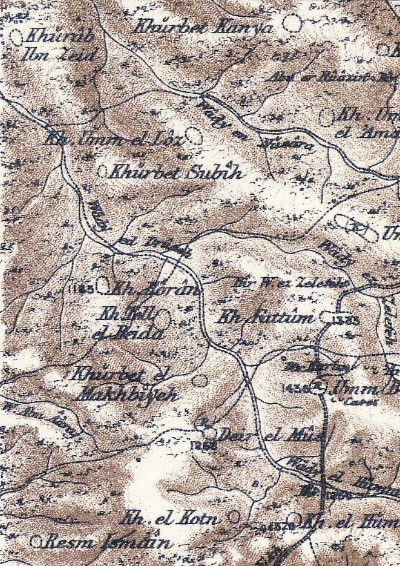 A map published in the 1940s shows the area around the site – named Kh. Umm el Lauz. The majority of the ruins are marked (as small dots) on the summit (trig point 314N, altitude 381.6m). 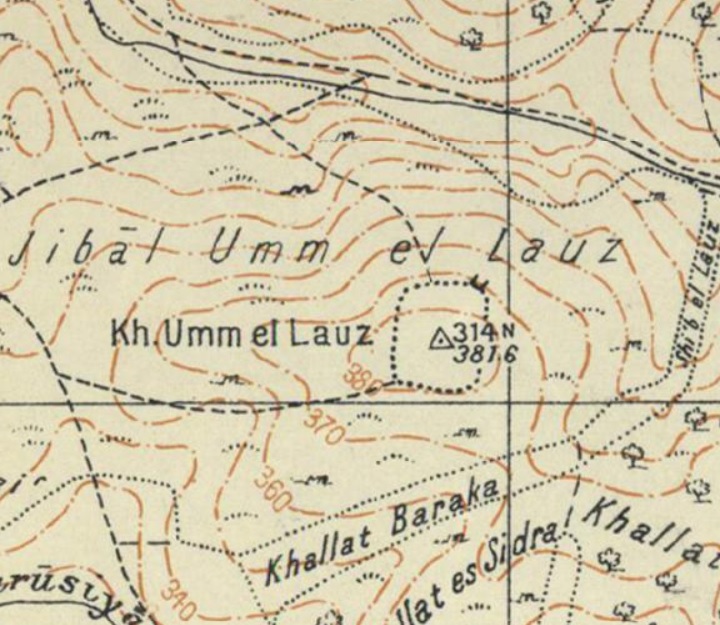 An aerial view of the site, taken above the east side with a westward view, was captured by the drone in October 2021. The site is located on a hill top, nested between Nahal Shu’a (right) and Nahal Hakhlil (left).

In the far background is a modern reservoir, and Moshav Tzafririm behind it. 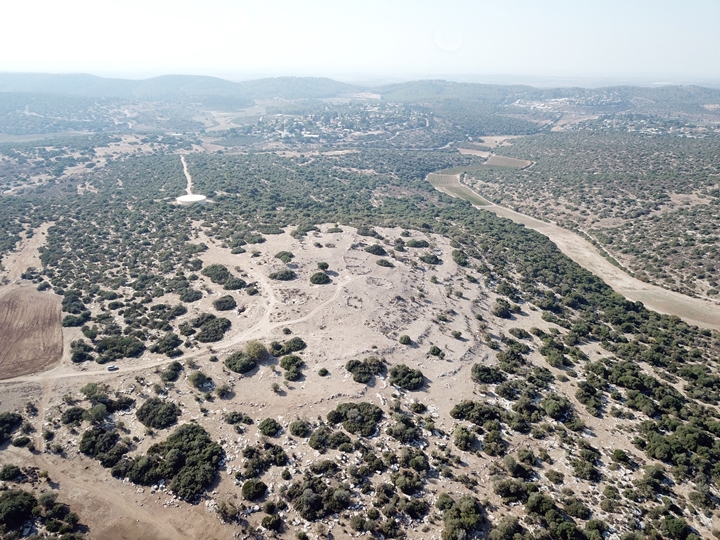 The next photo is a closer eastern view of the site from a lower height. Traces of structures, cisterns, underground cavities are seen on the hill. 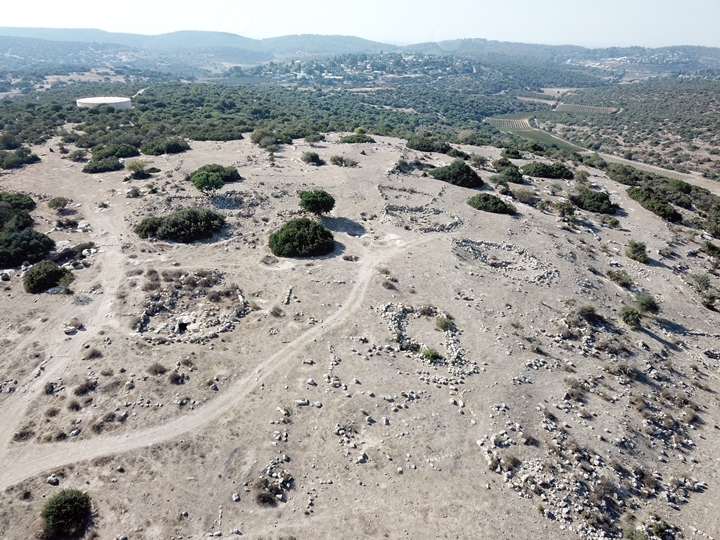 A vertical view towards one of the underground complexes. In the past there were houses built over the underground caves, which served as cellars and added rooms. However, the larger building stones were robbed, and reused in one of the Arab villages in the vicinity. This left the ground level mostly barren, while the remainder of the structures remain buried. 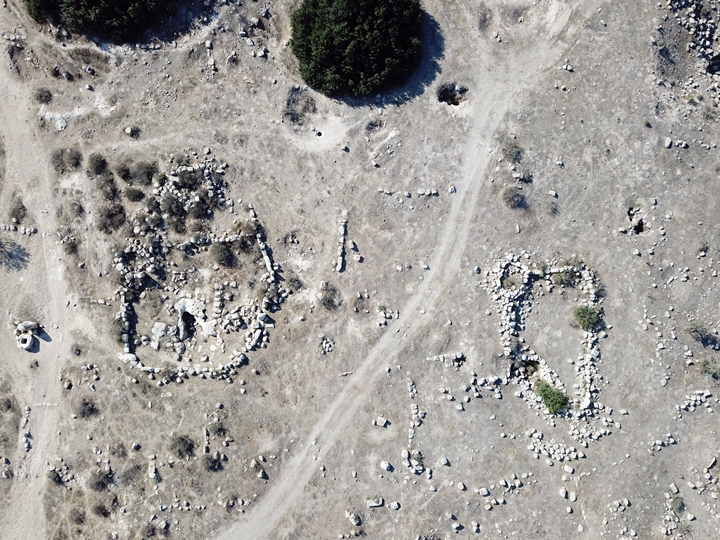 We accessed the site from the east side, by driving up a makeshift dirt road from Nahal Hakhlil on the south side of the hill. 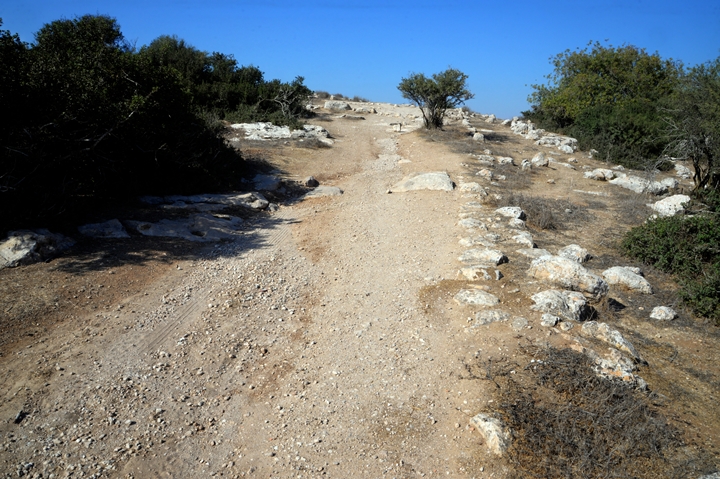 Across the summit are collections of stones, most of them circling around caves. 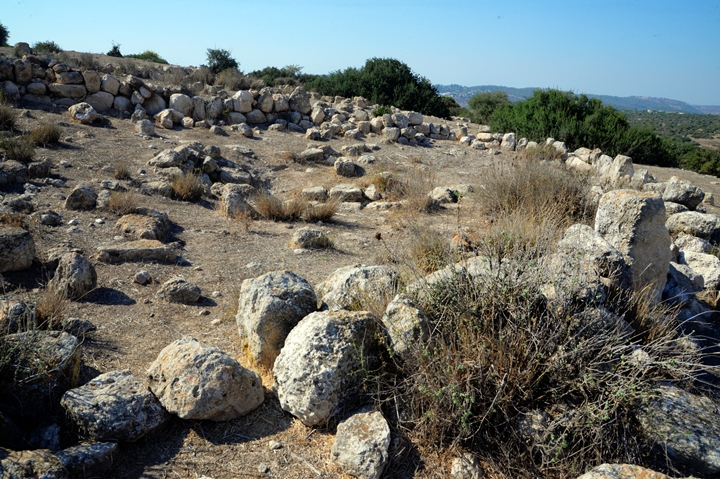 In antiquity, each such complex included stone built houses, a courtyard and underground rooms and cisterns for water supply.

After the settlement was abandoned, most of the structures collapsed or were dismantled. The remaining stones were then arranged as walls to enclose a stockyard for goats and sheep. The caves were used by shepherds for temporary or permanent housing. 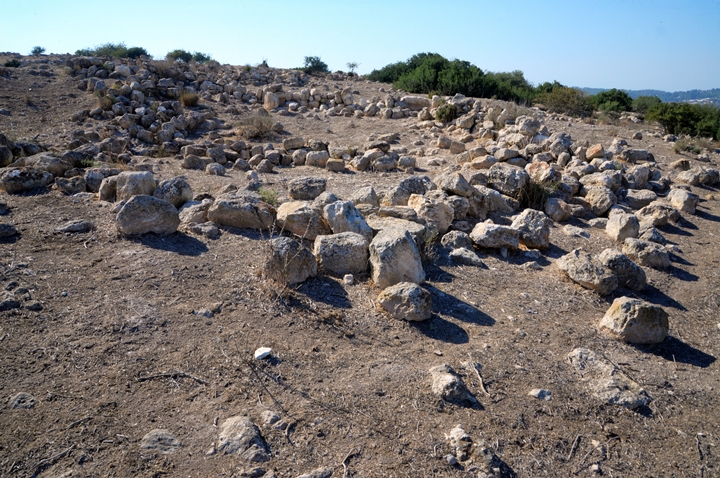 The following photo shows a north-west view of the northern foothills. The valley of Nahal Shua is seen here at the bottom of the hill.  Through the valley is a modern narrow paved road that connects to Moshav Givat Yeshayahu.  Its eastern neighborhood is seen in the far background, adjacent to another Second Temple village – Horvat Kanim (1.3 km north east of Horvat Shu’a). 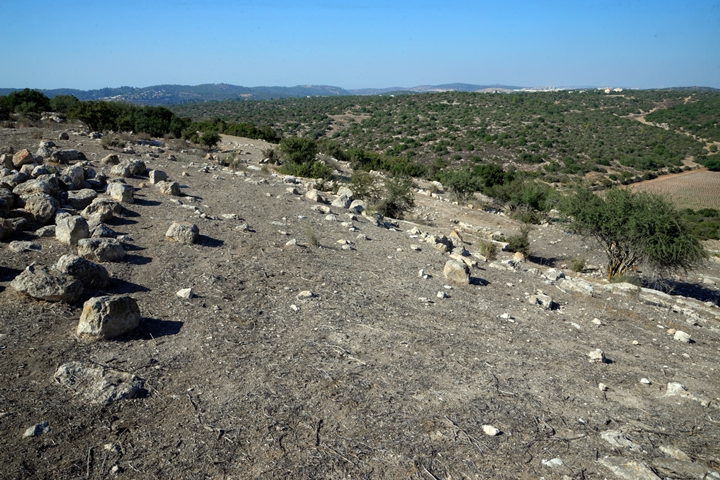 Another view of the top of the hill, pointed towards the east: 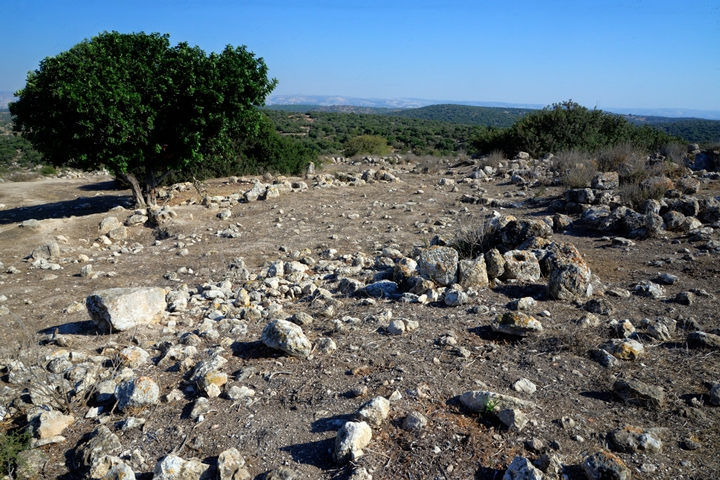 The most interesting features of this site is the underground caves, cisterns and hiding complexes. They are scattered all around the site, so be careful while exploring the area. 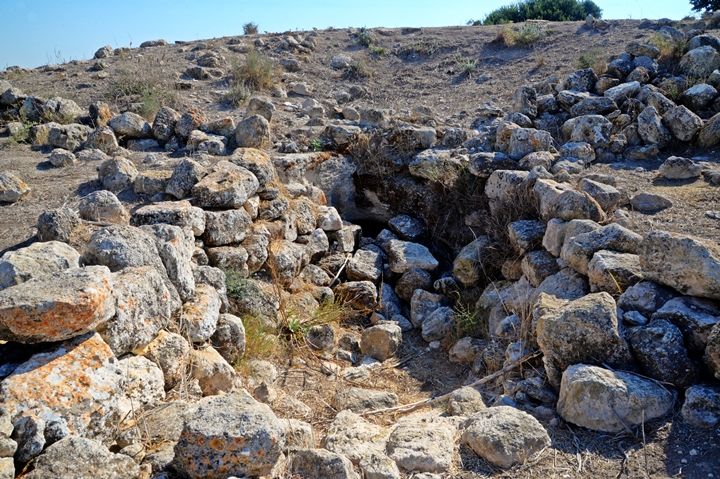 Some of the caves are interconnected, forming an underground complex. 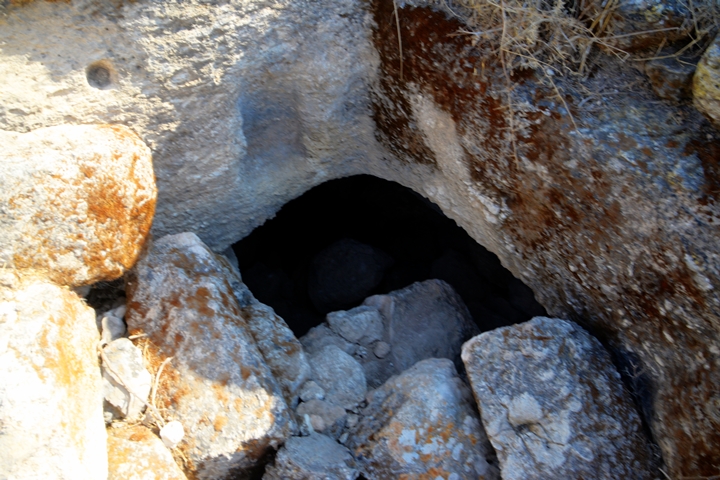 We did not crawl into any one of the caves, so only the openings are presented in the following photos. This is left for a future visit to the site. 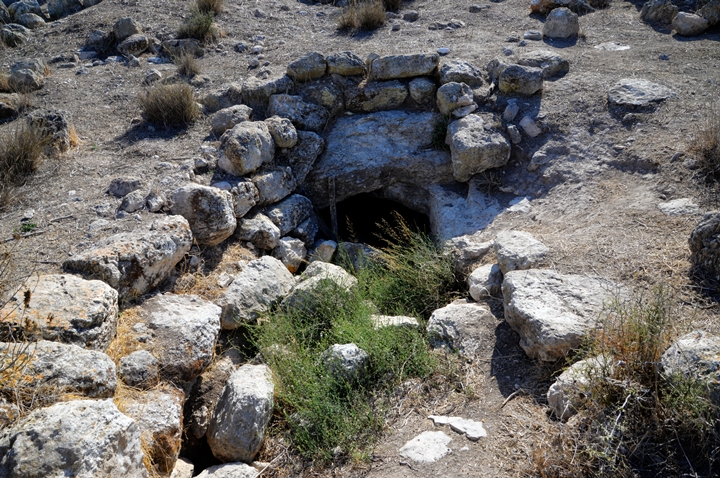 Here are additional cave openings that were seen on the site: 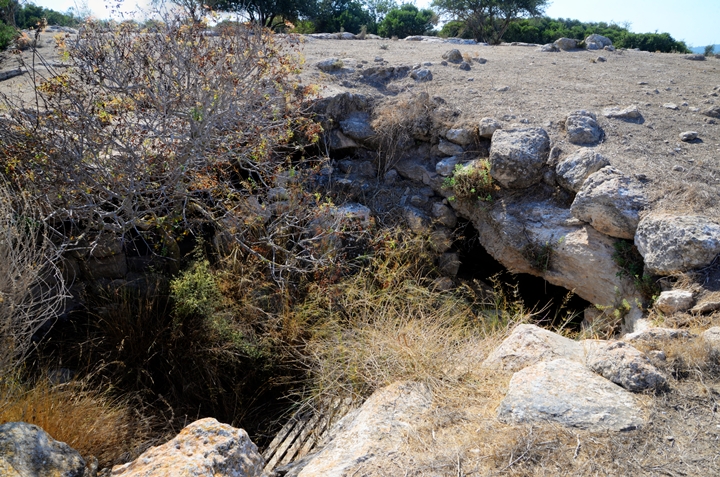 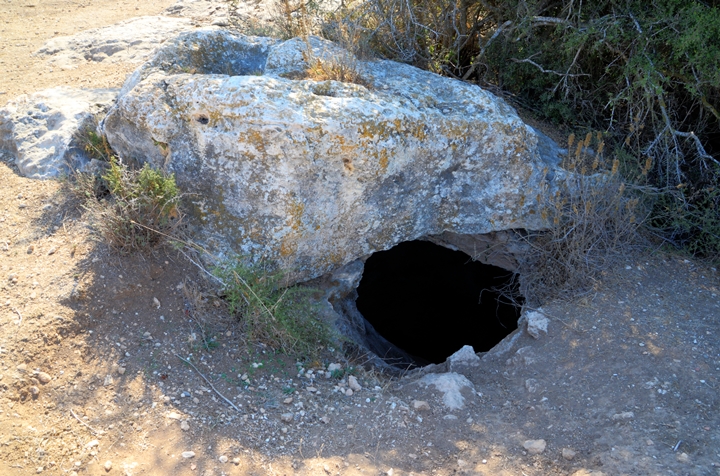 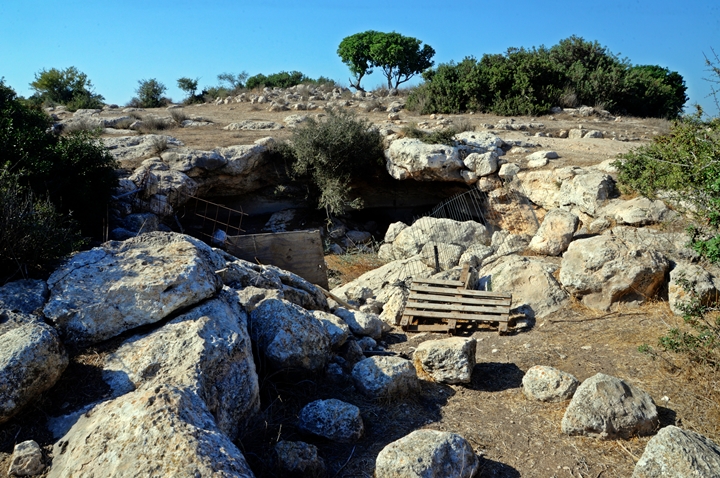 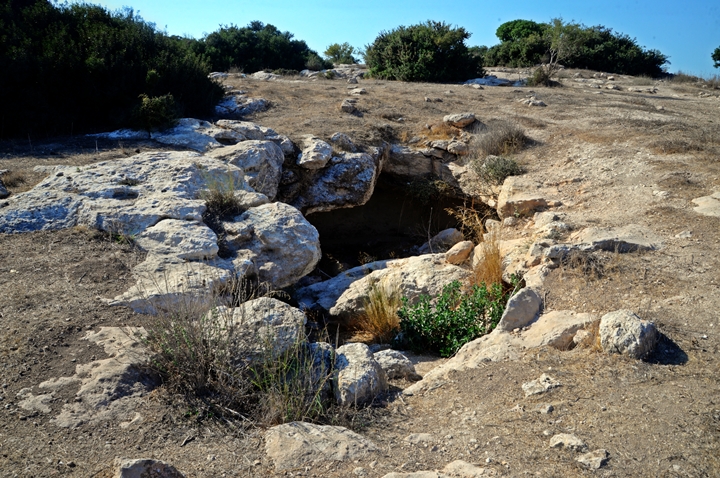 Scant remains of a columbarium on the walls of one of the caves on the east side of the summit: 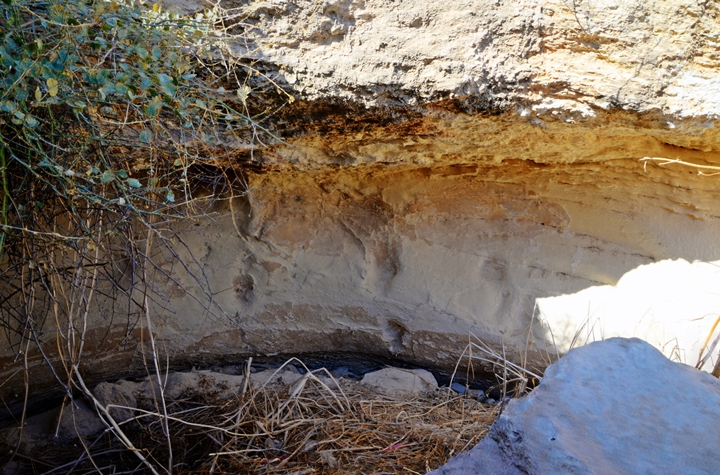 Remains of a well are located on the eastern side of Horvat Shu’a. A cover stone stands over the shaft of the well, with a square niche that once held a metal cover. 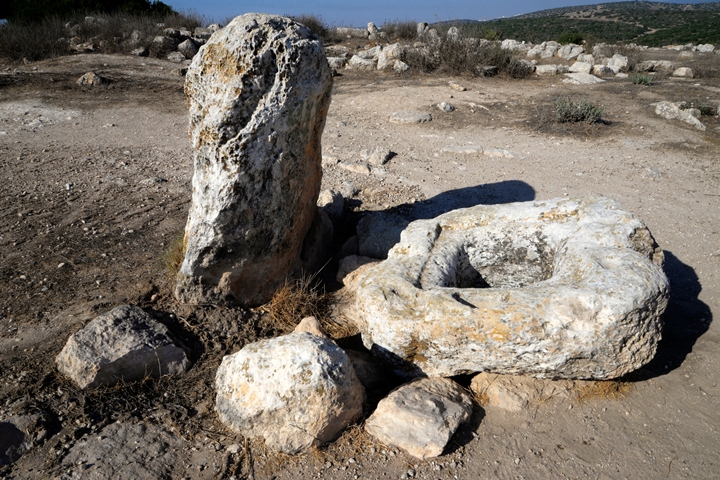 A tall upright stone stands at its side. What is its purpose? 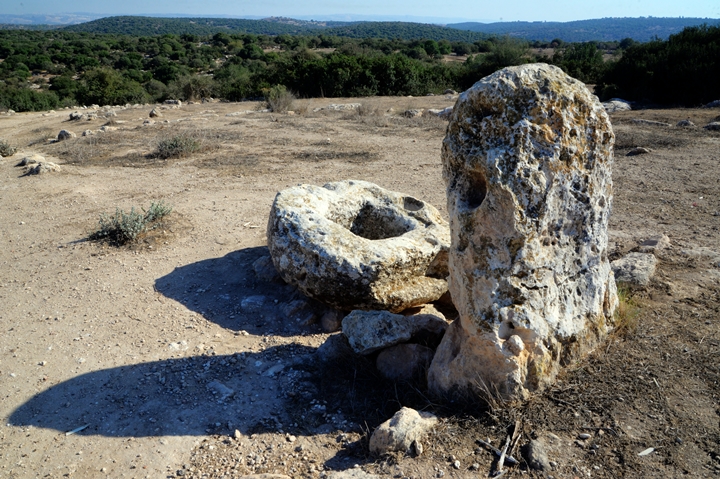