Tel Ein HaYadid is a ruin of a multi-period settlement, located on a natural basalt terrace at the foot of cliffs, adjacent to a small spring.

Tel Ein HaYadid (“Mound of the Spring of the Friend“) is located on a natural basalt terrace at the foot of cliffs, adjacent to a small spring. The multi-period settlement was occupied for 5,000 years since the Early Bronze Age 1 (3330-3050 BC).

The site is accessed by a trail starting from the nearby Kokhav HaYarden  (Kaukab el Hawa, Belvoir) Crusaders fortress. The site was occupied in the Canaanite (Bronze Age) and Israelite (Iron Age I-II) periods, as well as later periods.

And the fourth lot came out to Issachar… And Remeth, and Engannim, and Enhaddah, and Bethpazzez;”.

In 1 Chronicles 6:73 it is spelled ‘Ramoth’ (meaning: heights) and in Joshua 21:29 it is spelled ‘Jarmuth’ (based on the root word Ramah – height). The common base of these names refers to a high place, and indeed the site overlooks the Jordan valley which is 450m below. The modern Hebrew name is based on the name of the spring, commemorating Major General Orde Wingate, a senior British officer who befriended the Zionist movement, was a BibleWalker, and followed the tactics of his Biblical hero Gideon.

Cities and roads during the Canaanite and Israelite periods are indicated on the Biblical Map below. The site is marked with a yellow circle, 1.5km south of Nahal Tabor. Biblical Anaharath, is identified at Tel Rekhesh upstream on Nahal Tabor. Map of the area around the site – from Canaanite/ Israelite to Roman period (based on Bible Mapper 3.0)

The location of Tel Ein HaYadid was strategically important during the ages. According to Dorsey (“The roads and Highways of Ancient Israel”, 2018), Tel Ein HaYadid was along ‘T5’, a Bronze/Iron age road from Afula via Kh. El Hadad (near Taibe). It guarded the steep descent thru Horvat Ziwan (in the foothills below the site) and Horvat Zavon (850m south east), down to the Jordan River ford crossing at Tel Kittan. It also overlooked several major routes:

During the Byzantine period the settlement expanded on the mound. It also relocated 2.5km west to Khirbet Kafra – a new larger location above the cliff.  This was probably the village named Kokhva.

A large Crusaders fortress, Belvoir, was constructed on the cliff north of the site. The Crusaders valued the location of this place, probably for the same reasons that the earlier builders had: the proximity to major roads and to river crossing points, and the heights that provided both a natural protection and great visibility of the area around it.

The Arabic names of the site is based on the two springs – ‘Ein el Jirani and ‘Ein el Mahlal.

The site was examined in the PEF survey (1866-1877) by Wilson, Conder and Kitchener.  A section of their map is shown below.    Nahal Tabor stream is “Wady el Bireh” north of the site, and it flows into the Jordan river to the east (right).

The survey team did not write about the site. However, they added notes about the area around the site (SWP Volume 2, Sheet IX, p.118):

“South of the fortress there are traces of ancient garden walls, but without any indication of date. There is an Arabic inscription at the lower spring (‘Ain el Helu = “the sweet spring”) beneath the fortress on the south. It is almost entirely illegible, cut on a piece of basaltic rock, but according to Mr. Tyrwhitt Drake it refers to the finding or digging of the spring by a certain Emir. It is about 500 yards from the fortress”. 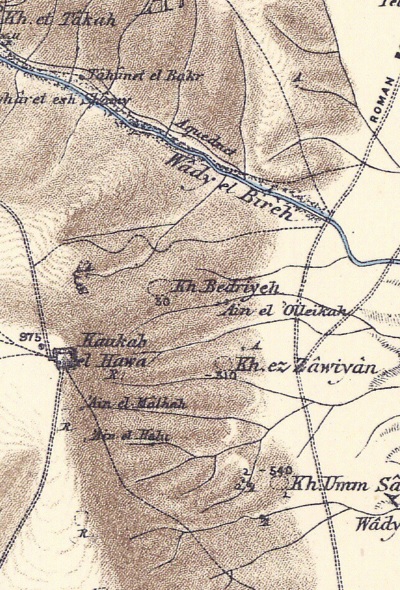 Part of Map sheet 9 of Survey of Western Palestine,
by Conder and Kitchener, 1872-1877.
(Published 1880, reprinted by LifeintheHolyLand.com)

A 1940s British map shows the area around the site with more details. The site is not marked here, but is located in the green area above the marked places of the two springs (named differently from the PEF map) – Ein el Jirani and Ein el Hilwe. 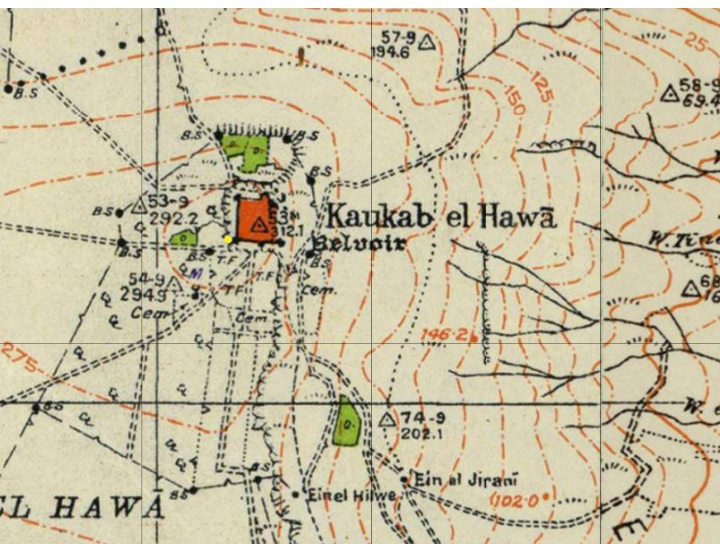 A 6,500 dunam farm, belonging to Meir Har-Zion’s family, was established in the land above the site. Meir, a praised Israeli commando fighter, passed away in 2014 and was buried in his farm.

The ancient site covers an area of 5 dunams, but was heavily damaged by Crusaders ground works and modern roads. On the mound are traces of buildings, walls, and farming terraces. On the south east side are remains of structures including columns – perhaps a public structure (synagogue?). 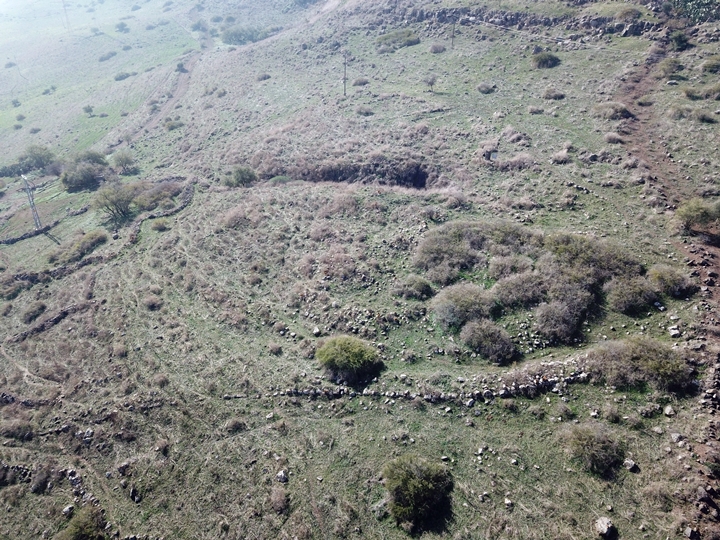 The site is located on a plateau under the cliffs of Kokhav Hayarden (“Star of Jordan”), 500m south of the Crusaders castle (seen here at the edge of the cliff).

On the cliff right above the site, in the area of the farm, is another section of the ancient site, as attested by pottery sherds that are dated to the Middle Bronze IIA and the Roman/Byzantine period. 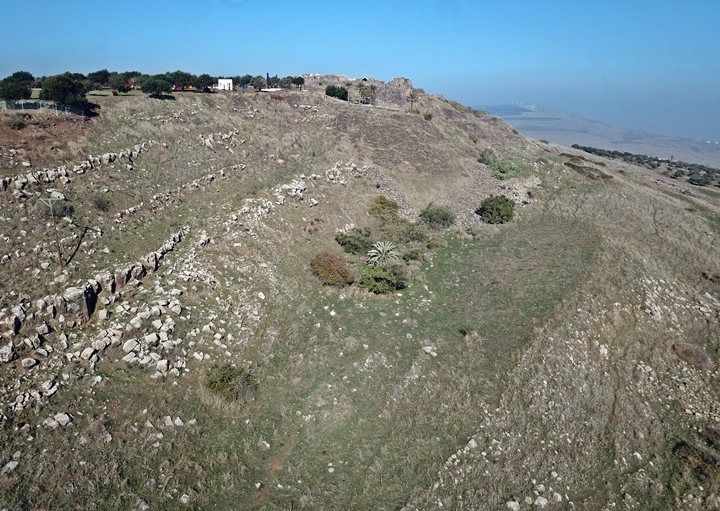 From the site are great views of the Jordan valley. Right below is the Iron Age fortress of Horvat Ziwan. Beyond is is highway #90, and the lower pool of the pumped storage project. Farther on is the delta of Nahal Tabor stream, with many ancient sites that serviced the Jordan river crossing. 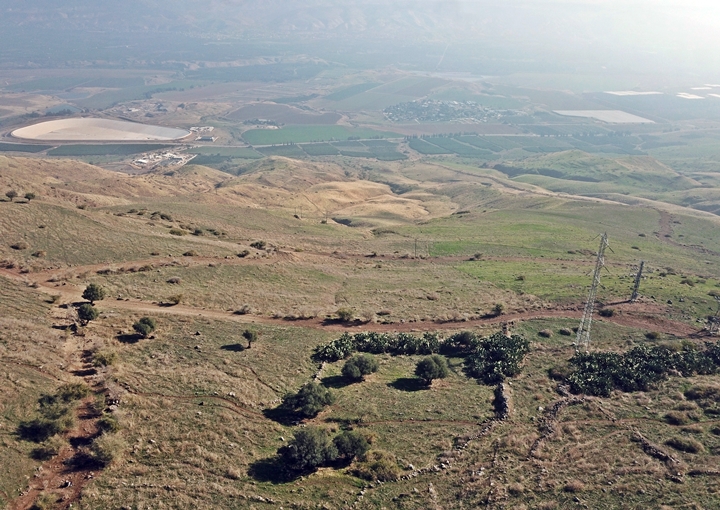 The site is accessed by a trail starting from the nearby Kokhav HaYarden  (Kaukab el Hawa, Belvoir) Crusaders fortress. It is seen here from the south east side. This side is where the Muslim assault of 1189 targeted the eastern tower (“The Barbican”) as their focus of the assault, and once they destroyed it the Crusaders knights surrendered. 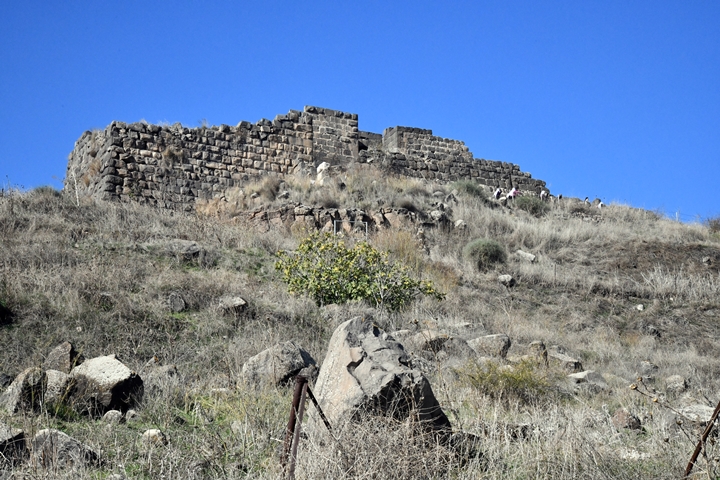 The trail leads below the area of the fortress and turns to the south.

Looking up, you can see a high pile of earth and rocks that were removed from the area around the fortress in order to create a deep dry moat. 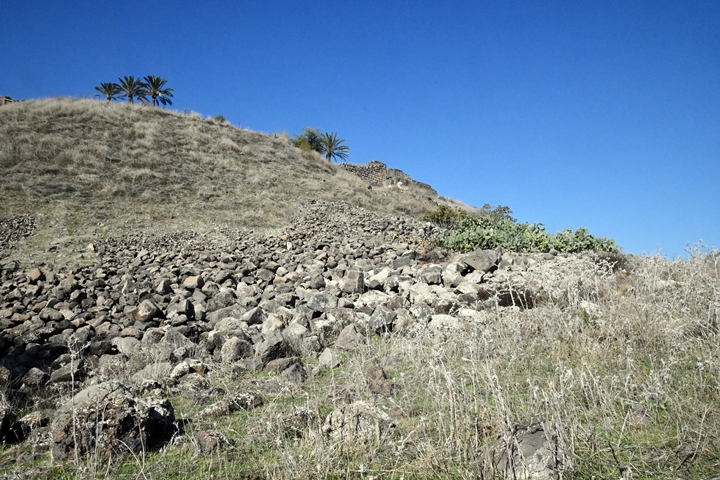 The trail continues to the south along the plateau that is under the cliffs. 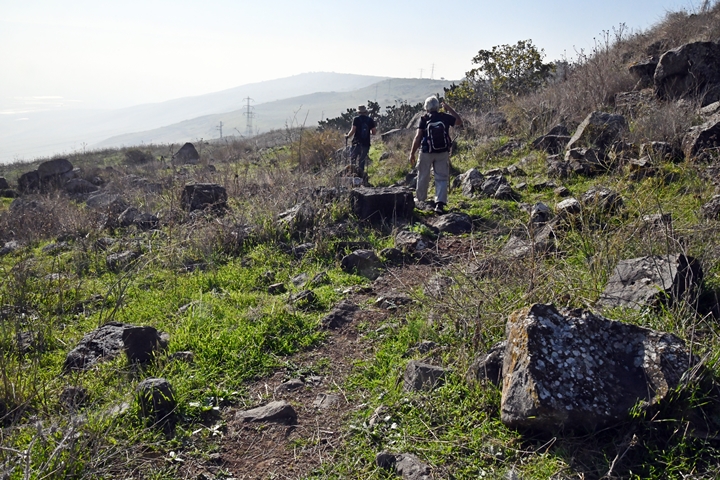 Along the trail is a palm tree – perhaps the original location of the spring. 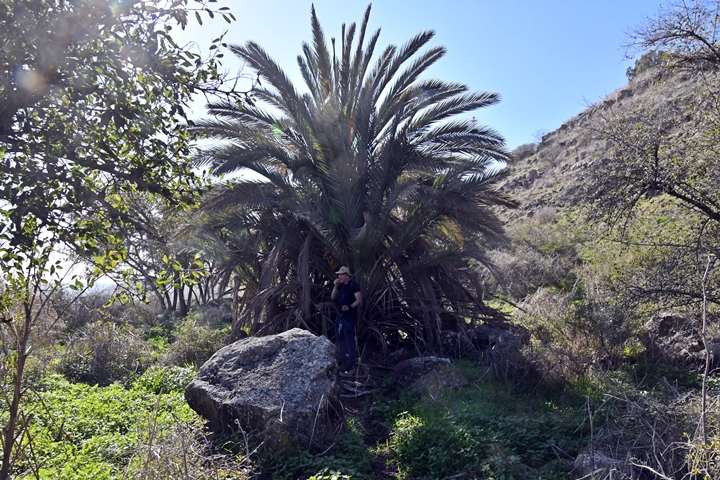 After reaching to the west side of Tel Ein HaYadid, there are two signs posted on the edge of the site, commemorating “The Friend”. This title refers to Major General Orde Wingate, a senior British officer who befriended the Zionist movement. 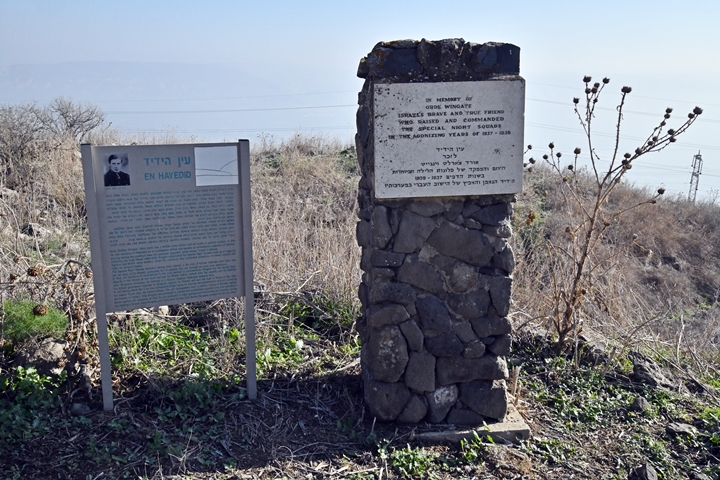 The Crusaders, who constructed the nearby Belvoir fortress, cut a long (160m) and deep (1.5m) ditch and conduit thru the site, connecting the spring to a pool via a water channel. It damaged the ancient site. 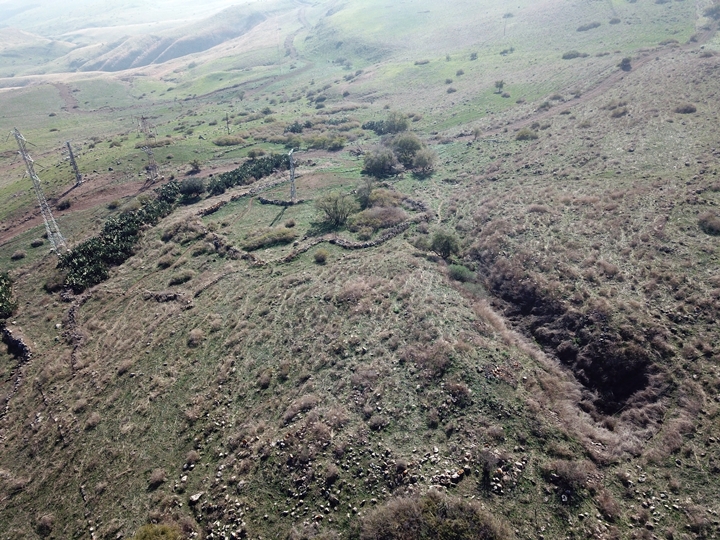 Another view of the south side of the site, with the ditch cutting thru the center of the mound: 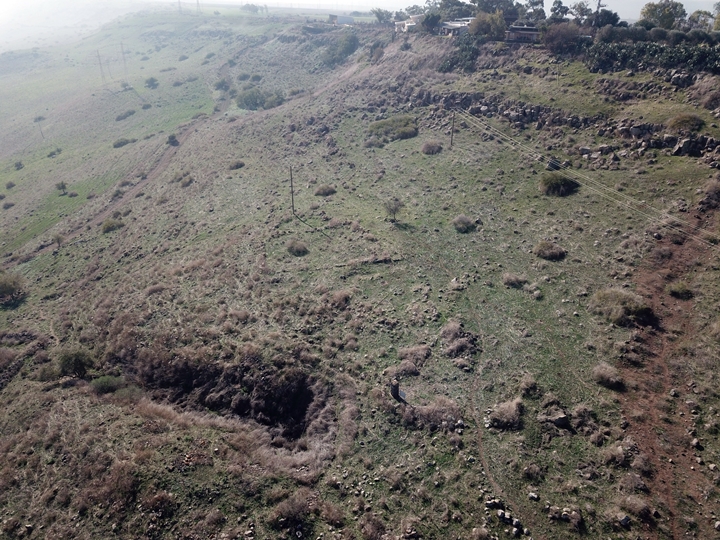 A ground view of the trench is in the following photo.

At the bottom of the ditch is a narrow, 0.6m high conduit built of basalt stones.

This deep cut into the ancient site revealed old layers. 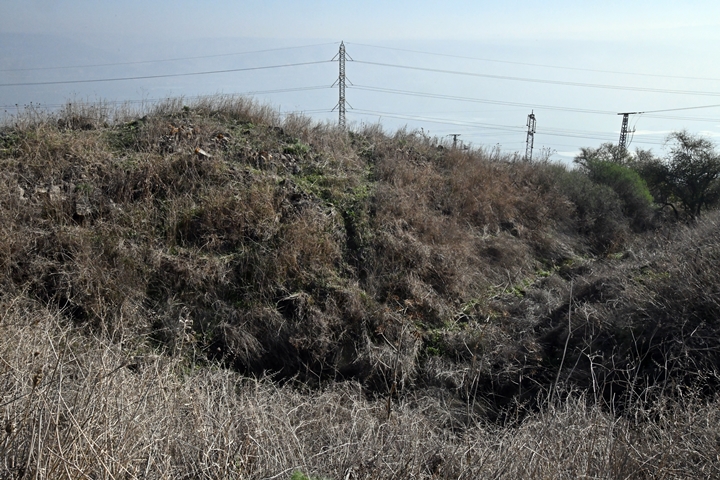 At the end of the trench is a trough for the cattle.

During the Crusaders period the trench conveyed the water from the spring into a pool or reservoir that provided fresh supply of water. 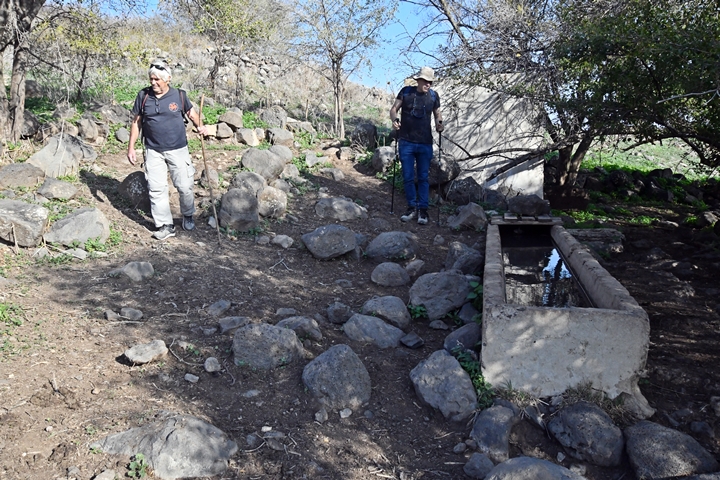 On the north side of the mound are remains of a long, wide (2.5m) defense wall, with a corner facing the south. 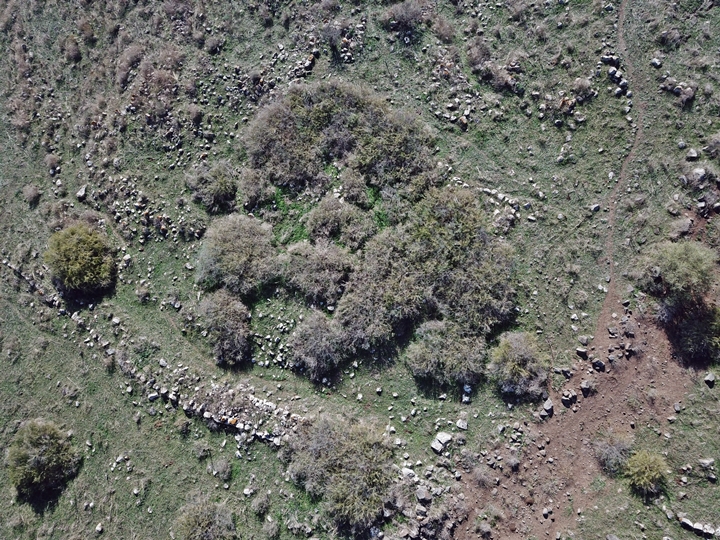 A closer view of the wall is below.

The date of its construction is not yet known, and should be investigated. Furthermore, was there another wall on the south side? 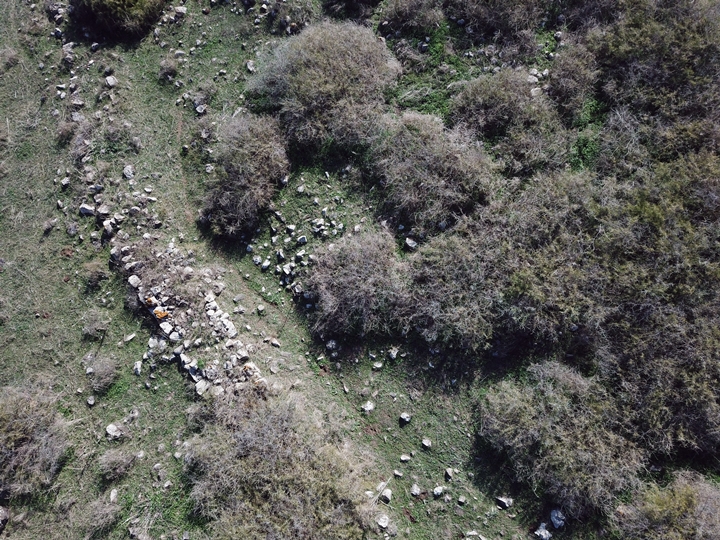 A ground view of the wall is next. The wall is preserved to 2-3 courses. 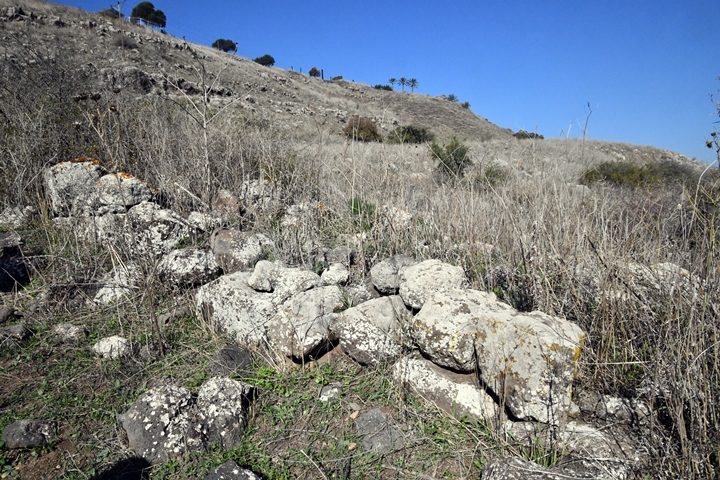 The wall stretches down to the lower level of the mound. This photo was captured from the east side. 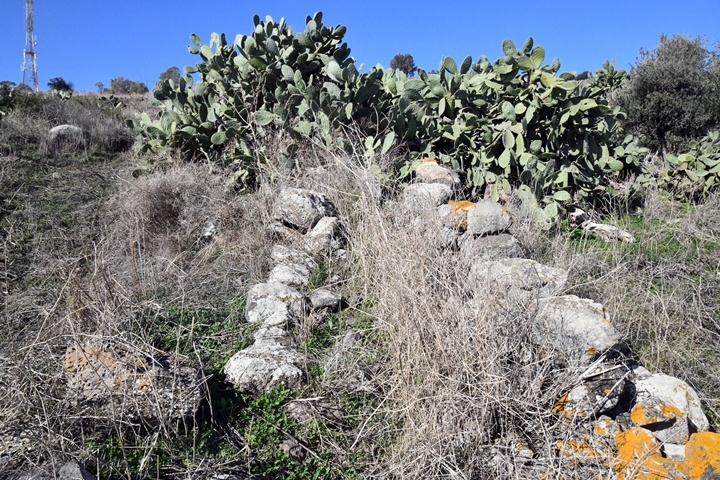 During our short stay on the site, we collected a few samples. The coin in this photo is for reference. All items were left on the site. 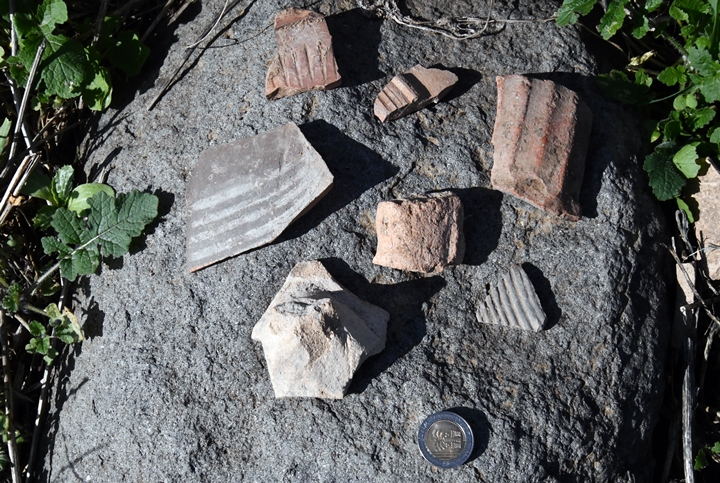 Another set of sherds: 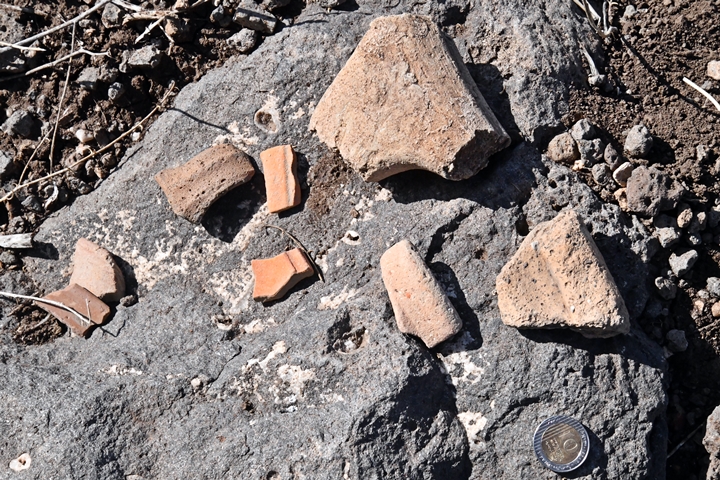 Closer view of some of the samples: 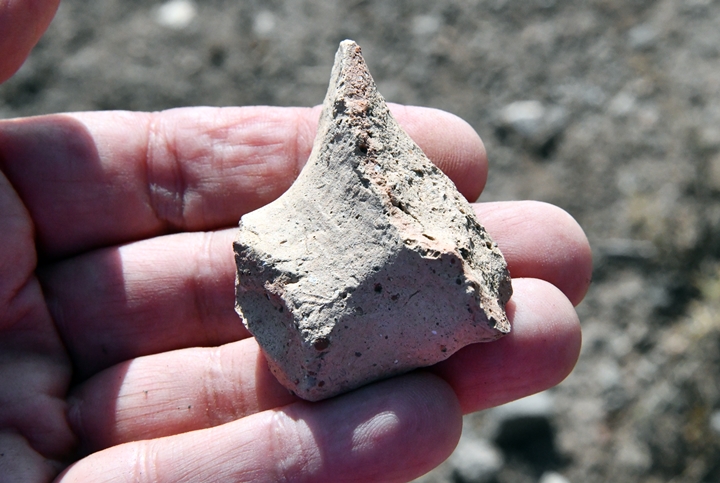 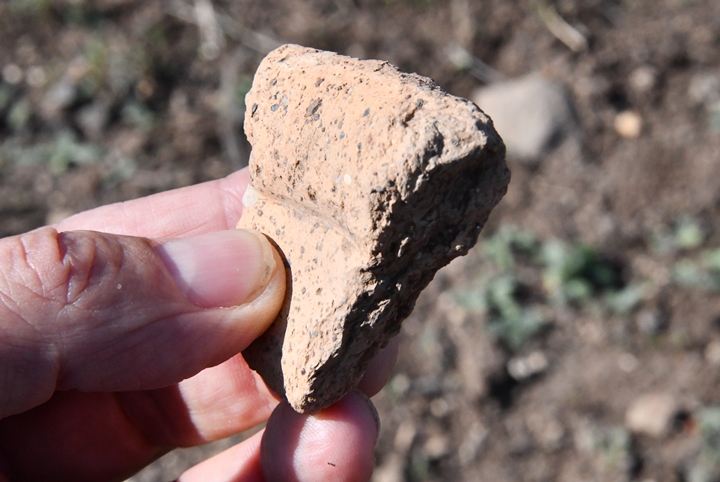 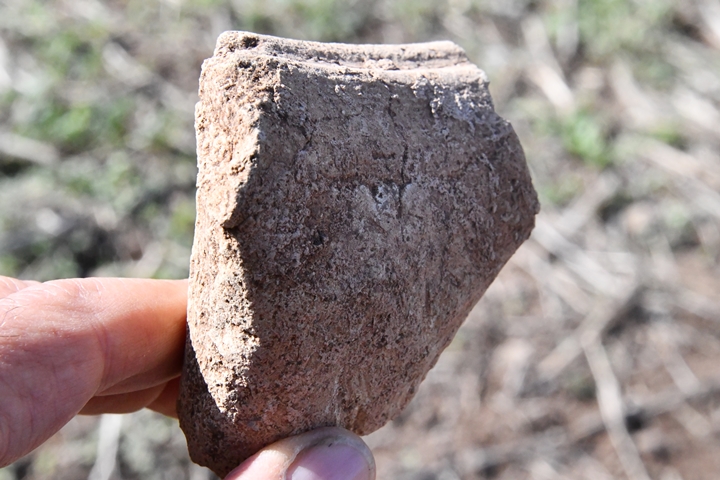 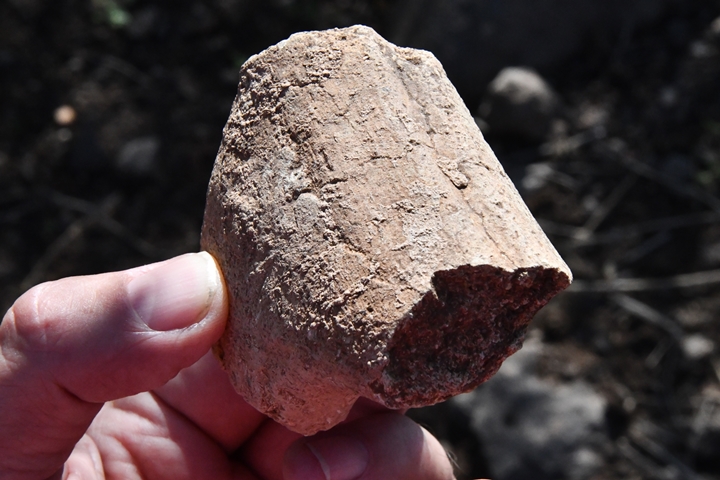 During our short survey of the site we did not see special carved stones. However, the IAA report suggested that structural remains of a Byzantine period synagogue (structure with fragments of basalt columns) were found on the south side of the mound, and a lintel was found in secondary use in the fortress.

Fly above and around the site with this YouTube video.

Video and photos captured on Dec 2022

BibleWalks.com – hiking the trails of the Holy Land