One of the largest copper mines in ancient times was in Wadi Faynan (Funon), south of the Dead Sea on the eastern side of the Aravah valley. The mines quarried copper starting from the Chalcolithic period (4500-3100 BC) thru the Roman period (4th century AD).

Two smelting sites were identified on the western side of the Aravah, southwest of  Moshav Hatzevah and east of Sapir center. These 5,000 years old sites are reviewed in this web page.

Copper was also quarried in Timna, on the southern Aravah near Eilat.  This operation is reviewed in another page.

The two smelting sites (Hazeva, Sapir) and the Faynan mines are indicated on the following map. 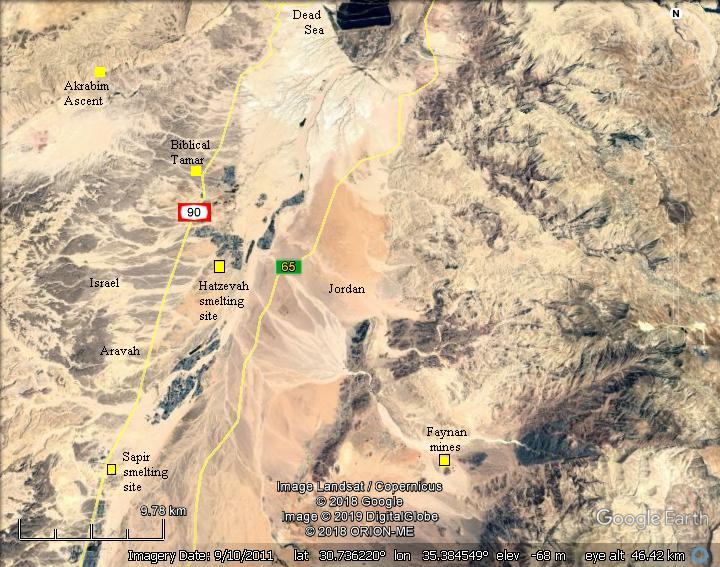 Copper, as well as other minerals, was extracted 10,000 years ago during the search for flint stones, as part of Early Man’s production of tools. Heated by fire, the Early man found it was possible to shape the mineral for creation of a new generation of tools made of copper.   Copper started to be in use in the Chalcolithic period (45th-32nd century BC). The name of the period – Chalcolithic – came from the word “copper” (Chalcos in Greek).  In those days the copper was collected on the surface, and only at the last centuries of the period that they started mining the ore under the surface.

Industrial copper mining in prehistoric times took place in the 5th millennium BC, as dated in mines across Europe and in the Levant. The mines in the Aravah and in Timna were probably one of the first mines in the World, using stone tools to dig into vertical shafts and horizontal tunnels.

Smelting installations were constructed to melt the mineral and mold it into the desired shape. Copper is melted at 1085° Celsius, a temperature that can be heated by an oven based on wood and powered by wind. Two smelting sites were found in the northern Aravah valley, and are reviewed in this page.

Copper bar ingots, shaped in crescent form, were unearthed in Early Bronze settlements in the Negev [link]. They were mined in the Faynan copper mines in Jordan. Another copper mine was located in Wadi Abu Kusheiba, 60KM to the south of Punon. The copper ingots were traded as a precious commodity, later to be melted into tools and jewelries. They were found in a dozen of Early Bronze sites in the Negev area, such as Har Yeruham.

In ~3500 BC copper was perfected by adding tin. Tin is melted at a lower temperature of 232° Celsius (450° F). The new alloy – mixture of copper and tin – was stronger and easier to cast,  expanding the range of metal products. Bronze tools and weapons soon replaced earlier stone versions. The era was termed the Bronze Age, as the metal revolutionized the tools and instruments used by the Early Man.

At later periods zinc was added to copper to create a new alloy named brass – a golden like bronze. 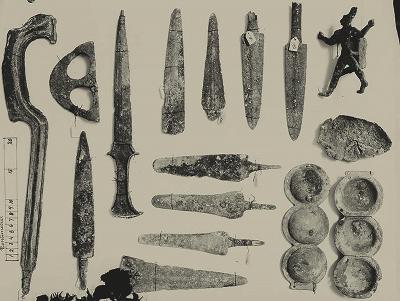 Bronze was an important commodity, and the Canaanite and Israelite Kings regarded the mining and hauling as a strategic source of wealth and strength.  It is probably why the fortress in Biblical Tamar was constructed, as it stood by the road leading from the Punon (Faynan) mines on the east, and the Timna mines  on the south, through the Scorpion Ascent, into the Land. 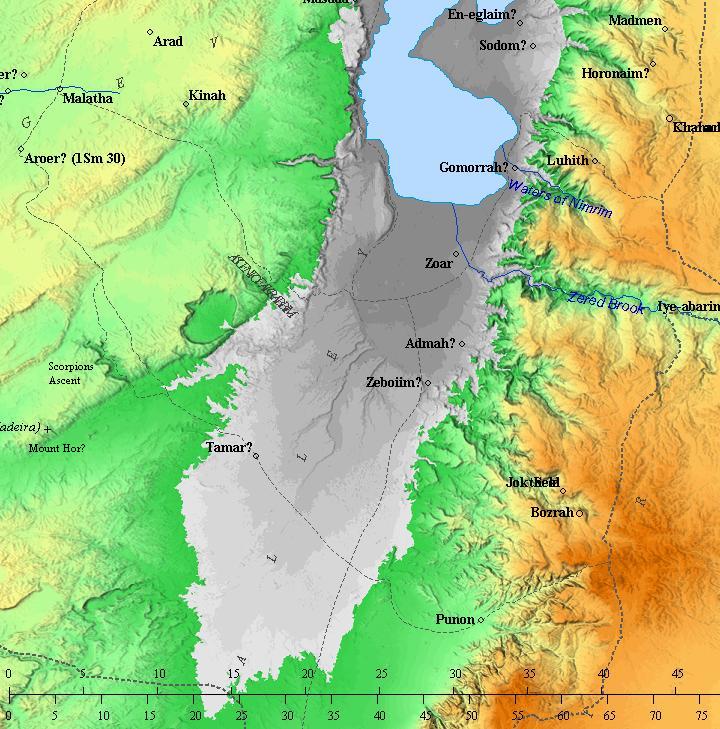 Map of the area  – during the Biblical periods  (based on Bible Mapper 3.0)

During the exodus the Israelites passed along the Aravah, and passed Mount Hor (Mount Zin?) where Aaron was buried. When the King of Arad heard of the arrival of the Israelites, he blocked their entry through this passage (Numbers 21:1):

“And when king Arad the Canaanite, which dwelt in the south, heard tell that Israel came by the way of the spies; then he fought against Israel, and took some of them prisoners”.

The “Way of the Spies” (Hebrew: Way of the Atharim) may have been the same route through the Scorpions ascent (a theory that was proposed by Y. Aharoni, the excavator of Arad). After this block, the Israelites moved south towards the Red Sea on the southern edge of the Aravah. The stations are listed in the Bible in another passage (Numbers 33:40-43):

The place called Punon is identified as the area of the copper mines. The Arabic name – Wadi  Fynan – preserves the Biblical name. The ancient mines are named in Arabic as Khirbet en-Nahash. Zalmonah is identified as Tell Salamanyeh, north west of the mines, based on the similarity of the name.

One of the events recorded along their journey was the attack of the snakes. At the conclusion of this event, Moses made a “serpent of brass” or copper. It is probable that this event occurred near one of the smelting sites, and that the next station (Oboth) was the spring at Ir Oboth (Biblical Tamar archaeological site).

“And they journeyed from mount Hor by the way of the Red sea, to compass the land of Edom: and the soul of the people was much discouraged because of the way. And the people spake against God, and against Moses, Wherefore have ye brought us up out of Egypt to die in the wilderness? for there is no bread, neither is there any water; and our soul loatheth this light bread. And the LORD sent fiery serpents among the people, and they bit the people; and much people of Israel died. Therefore the people came to Moses, and said, We have sinned, for we have spoken against the LORD, and against thee; pray unto the LORD, that he take away the serpents from us. And Moses prayed for the people.  And the LORD said unto Moses, Make thee a fiery serpent, and set it upon a pole: and it shall come to pass, that every one that is bitten, when he looketh upon it, shall live. And Moses made a serpent of brass, and put it upon a pole, and it came to pass, that if a serpent had bitten any man, when he beheld the serpent of brass, he lived. And the children of Israel set forward, and pitched in Oboth”. 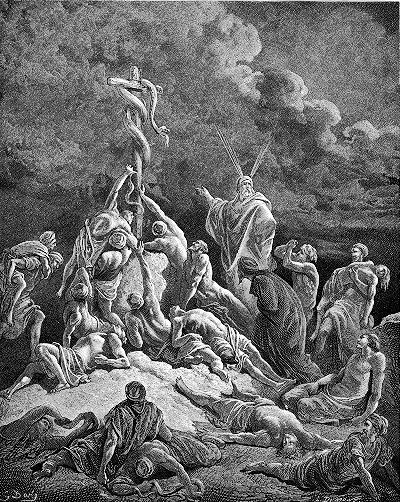 The oasis, identified as Biblical Tamar and Roman Tamara, is located in the Aravah valley. It receives its waters from the spring of Ein-Hazeva.  The frontier location, situated on the crossroads of major ancient routes, was a perfect place for a fortress and inn. Archaeological excavations have reconstructed a number of fortresses and installations dated to the Israelite Kingdom, Nabatean, Roman and Early Arab periods.

The strategic location of Tamar (at Ir Ovoth), and the availability of spring water, were the reasons that the Israelite kings built a fortress at this location. The earliest structure was dated to the 10th century BC- the times of King Solomon.   During his times the route was used to trade with southern kingdoms such as Ophir (Africa?), Sheba and Arabia (as per 1 Kings 10).  Tamar is listed as one of the cities built by Solomon in the wilderness. Although it appears in the Bible as Tadmor, scholars suggest that it was actually the fortress at this site (1 Kings: 17-18): “And Solomon built Gezer, and Bethhoron the nether, And Baalath, and Tadmor in the wilderness, in the land”.

Recent theories suggest that Tamar was important for the Judean Kings in the 10th-9th Century as it was located near the source of copper mining, which was at that time in Punon/Funon, 30 KM south east of Tamar.  Another but farther mining center was in Timna, 130km south. The copper mining industry, which reached a peak during this period, was an important source of income for Kings David and Solomon. It was perhaps a major factor of the Judean Kingdom’s prosperity, and one of the commodities that Solomon traded with the southern kingdoms. Tamar is located on the route from Punon/Funon to Judea, and therefore the fortress was constructed to safeguard the route. According to archaeologist Nelson Glueck this was one of the reasons why King David conquered Edom, where the copper mining center was located (1 Chronicles 18:13): “And he put garrisons in Edom; and all the Edomites became David’s servants”.

Both ancient smelting sites are located in open public areas. The Hazeva site, located inside a memorial park (“Shezaf lookout”) , has an easier access by car.

The ancient smelting place is located inside a memorial observation park, 2km southwest of Moshav Hazeva. 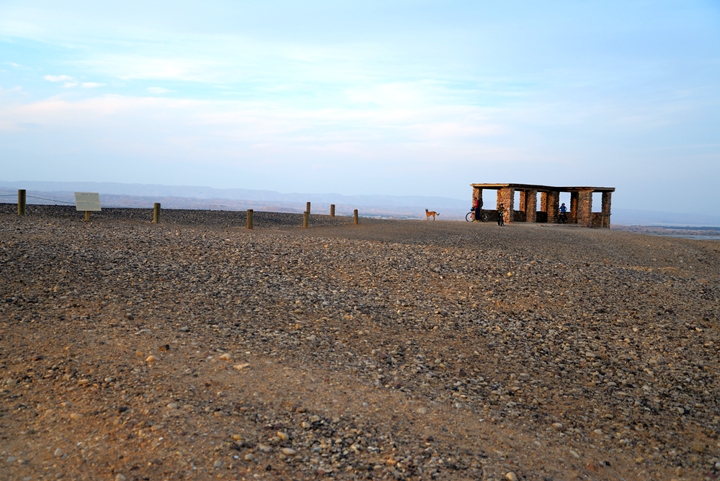 The sign on the entrance describes the remains on the edge of the cliff: “Five thousand years ago, copper was produced here from earth mined in Punon, in the southeastern Edom mountains. Smelting vessels made of mud and stone were used. This hill was a good site for obtaining the high temperatures needed for this purpose, because of the native trees used to fuel the fire and the brisk wind that fanned it.”. 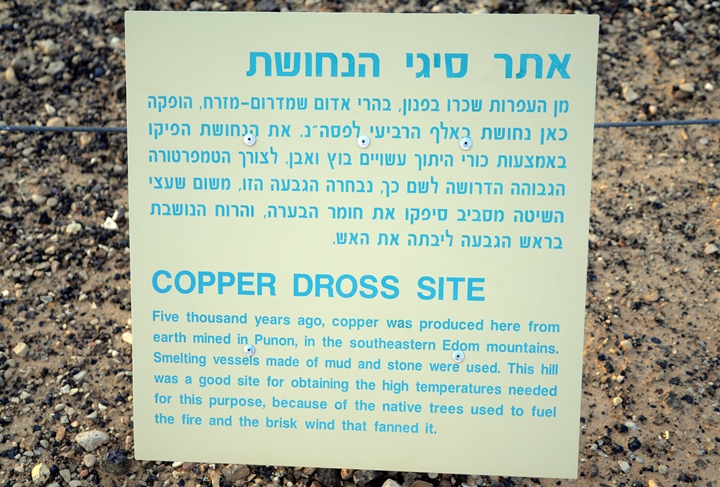 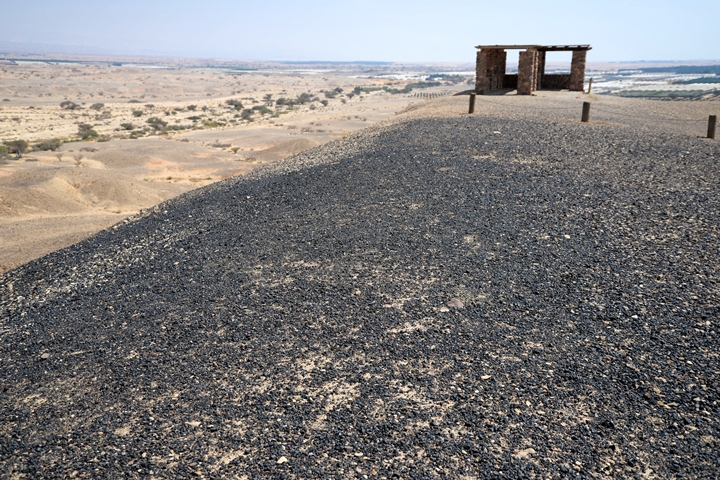 Between the black pebbles are small green specks of copper. The kids examine the surface to locate the tiny copper fragments. 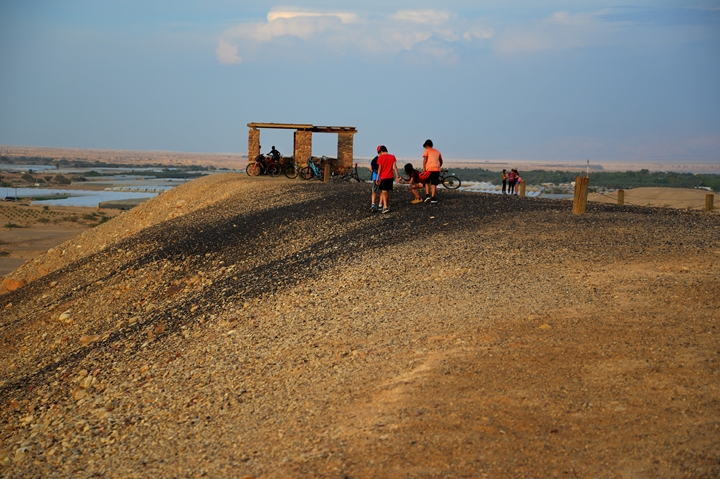 Fragments of copper (green spots) and molten stone (black) are scattered on the surface. 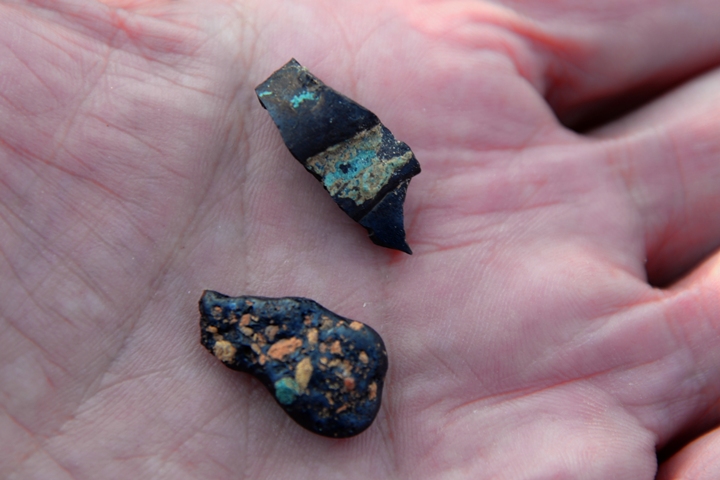 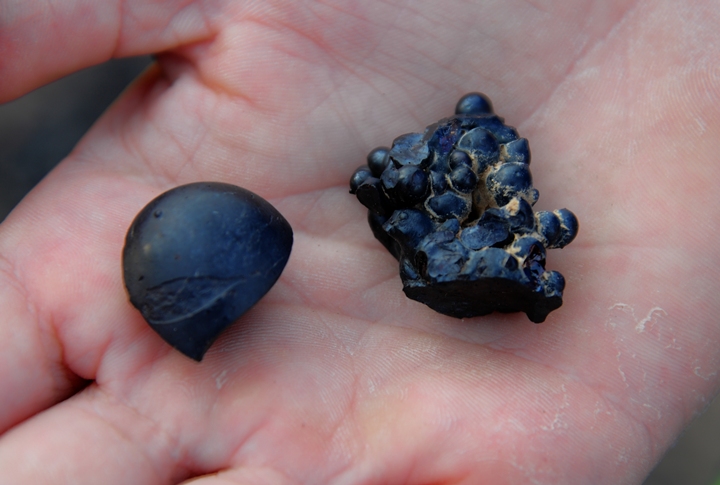 From the hill are great views of the Aravah valley – part of the Syrian-African fault line and 110 m below sea level.  In this section the width of the valley is about 20km from west (Negev mountains) to east (Jordanian Edom mountains).

Aravah means in Hebrew a plain or a desert, and is based on the Biblical source (Deuteronomy 1,1): “These be the words which Moses spoke unto all Israel on this side Jordan in the wilderness, in the plain over against the Red sea, …”.

This photo is a view towards the west. In the far background are the high mountains of the Negev. 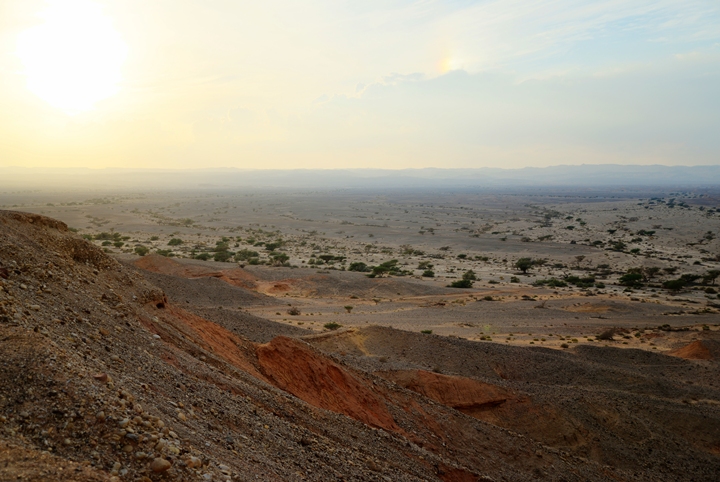 To the east are the mountains of Jordan. The copper mines of Punon are located in a valley 20 KM south east. 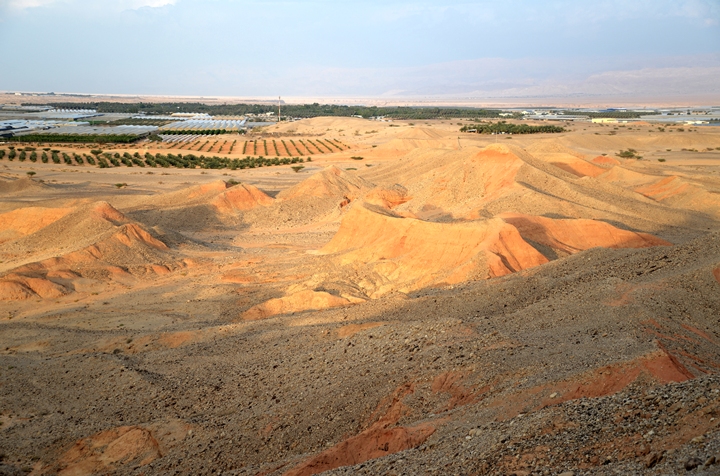 This memorial park, named “Shezaf Lookout”,  is dedicated the soldier Oren Lior who fell in combat with terrorists on the Jordanian border 2km to the east. 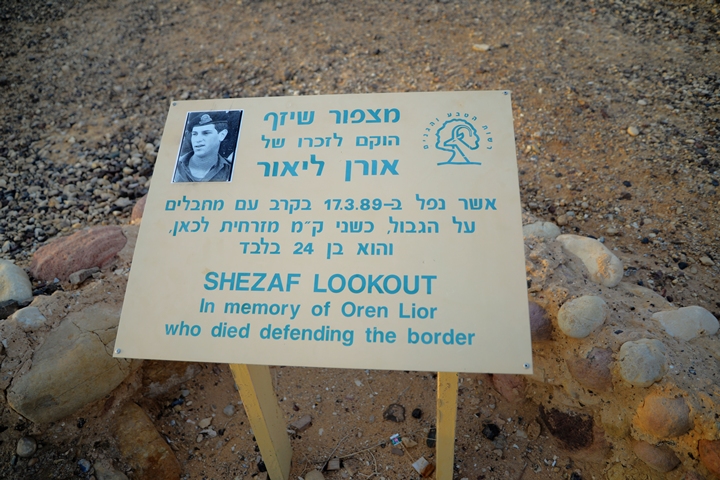 Another smelting site is located on a hill facing Sapir center, 13km to the south of the Hazeva site. The black stained hillside is visible on the east side of highway #90. 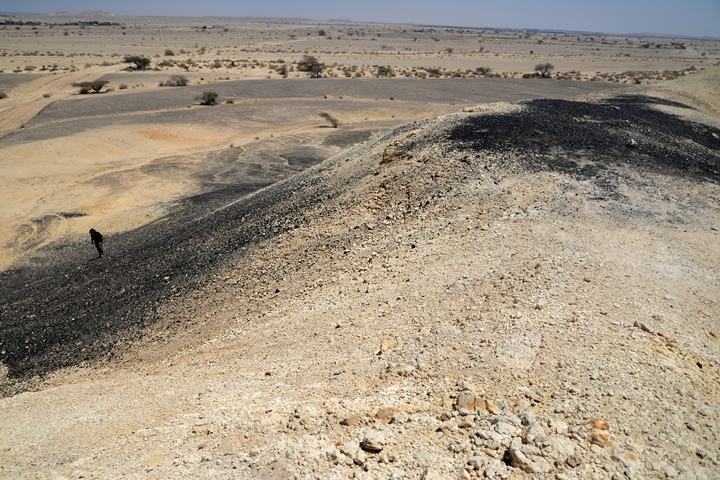 The top of the hill, and its western foothills, are covered by the black stones – the result of firing the quarried minerals in order to melt out the copper. 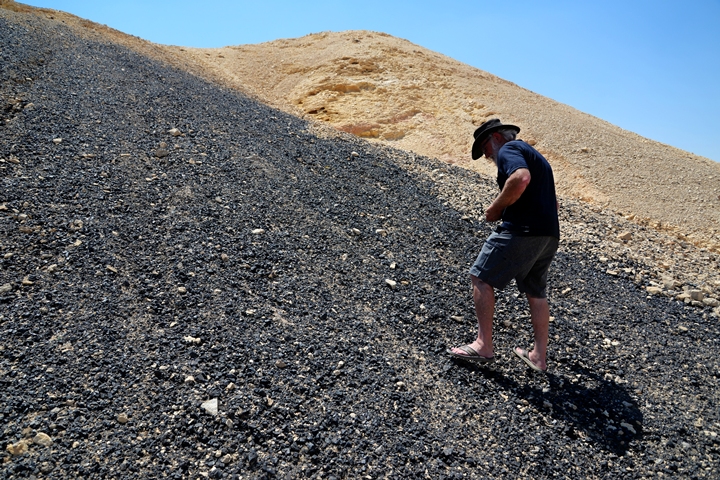 The black pebbles cover just the surface, as can be seen in the shallow layer above the local bright stone. 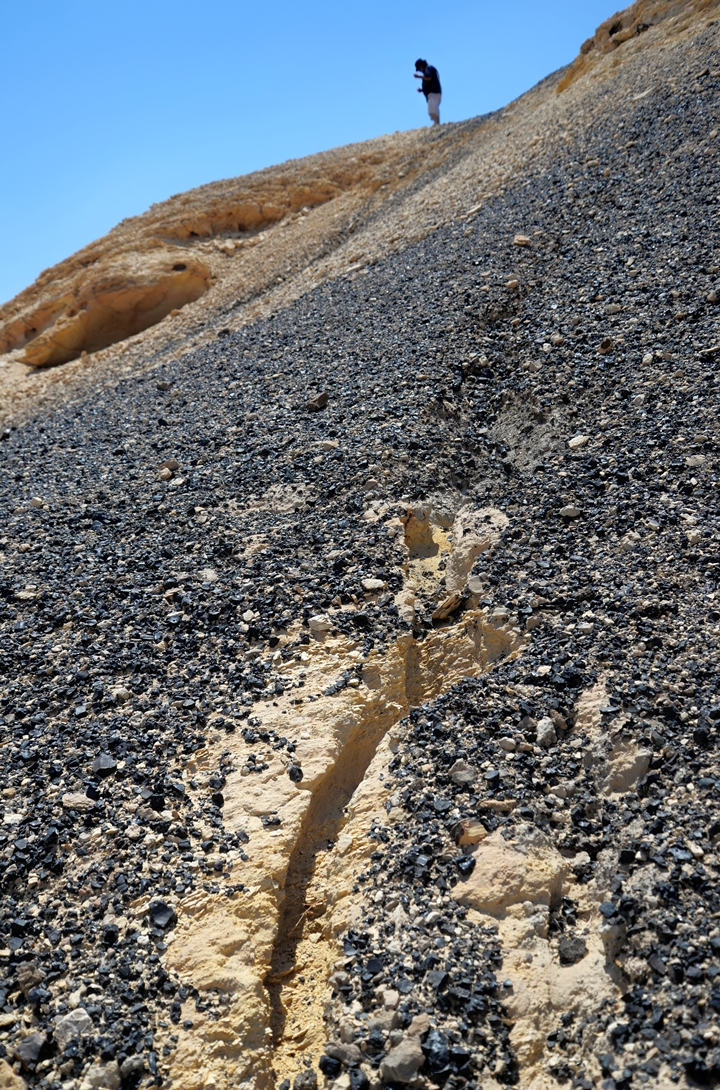 The team, from the nearby Biblical Tamar, searches for the green fragments… 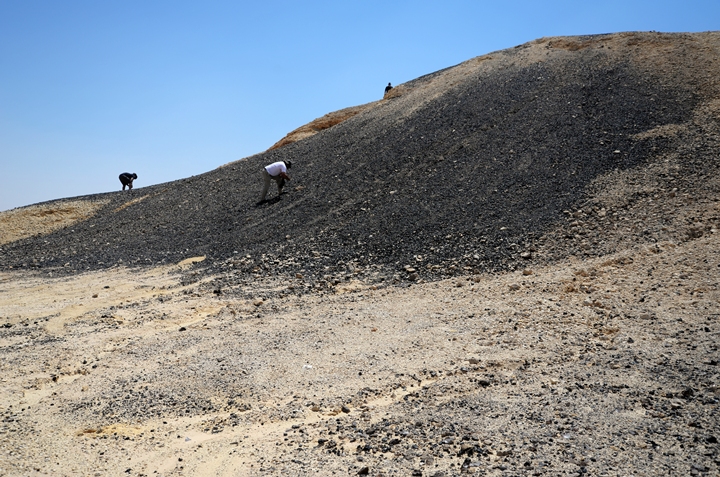 A sample of the copper fragments found on this hill side are seen in the next photo. Please do return all collected fragments back to the surface… 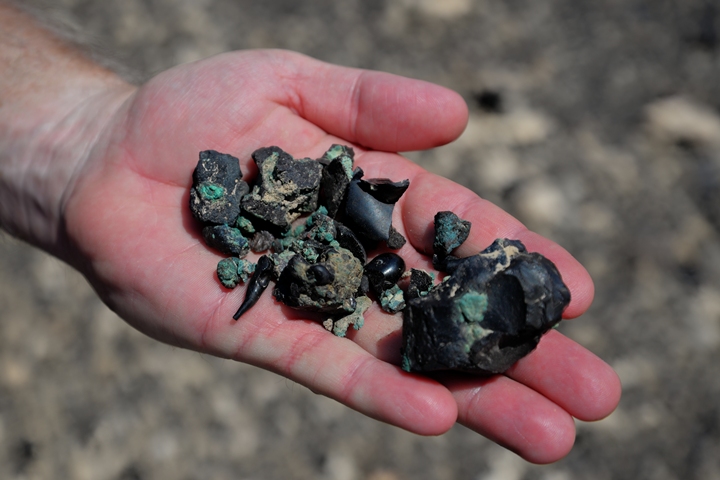 A large piece of copper dross: 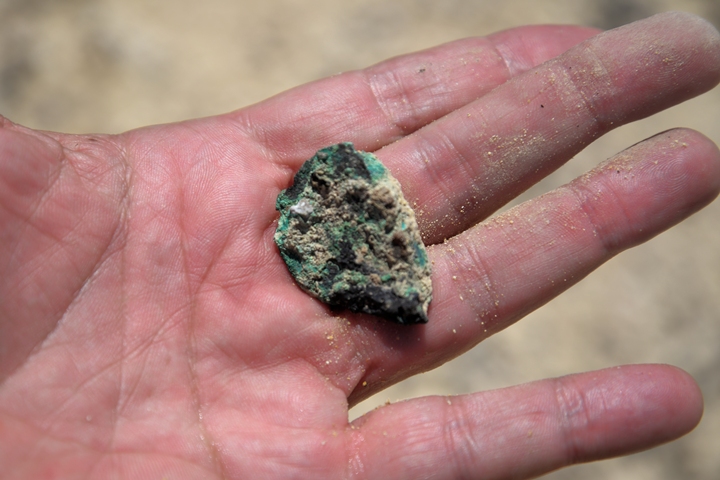 From the hill are eastern views towards the Jordanian mountains. The source of the copper is located 20km to the east. 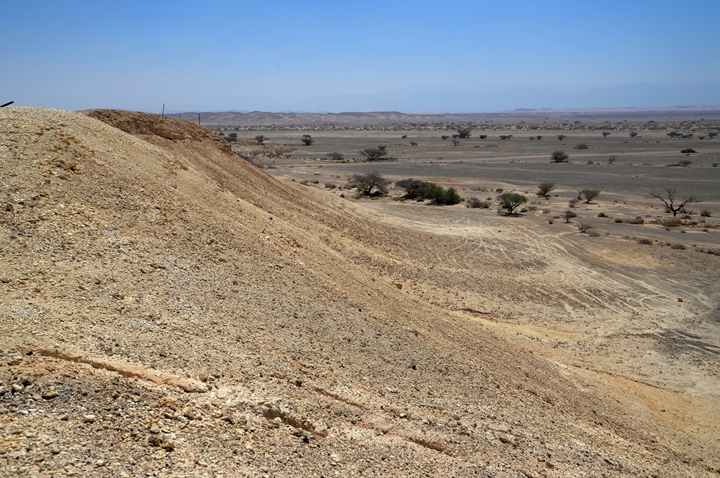 On top of the hill is a stone with ancient carvings. 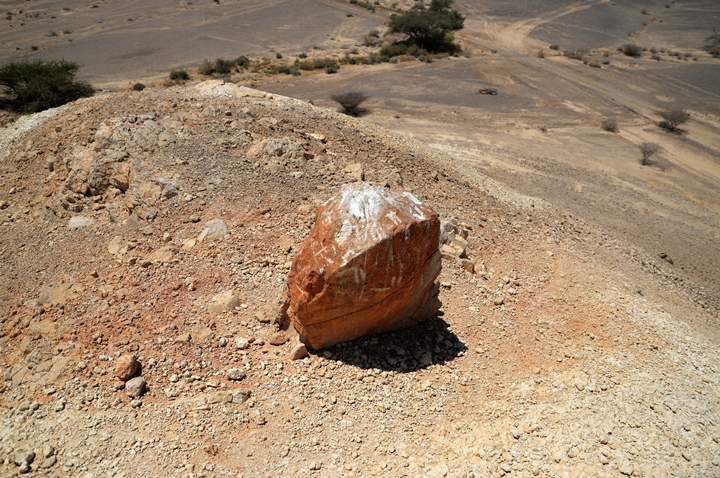 A closer view of the carved stone: 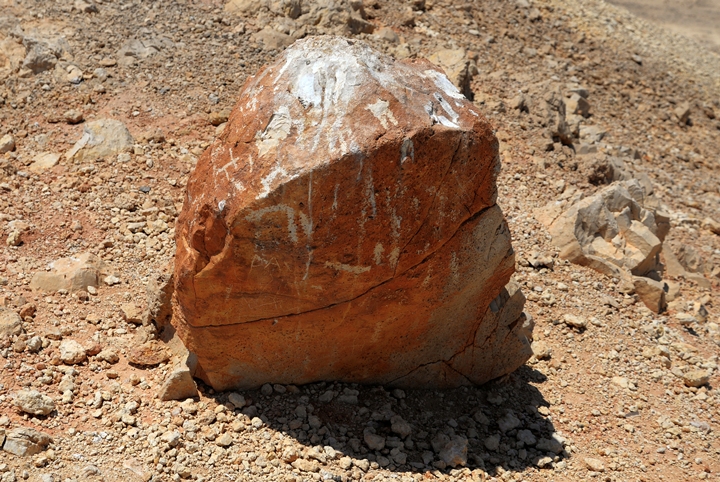 * Names of the sites:

This page was last updated on Oct 4, 2020 (Oldest furnace found)