An impressive table shaped hill located in the valley of Zin, identified as Mount Hor – the burial place of Aaron.

An impressive table shaped hill located in the valley of Zin, within the area of the Zin phosphate plant. According to some scholars, it is identified as Mount Hor (Hor Ha’Har) – the burial place of Aaron.

Numbers 20 22: “And the LORD spake unto Moses and Aaron in mount Hor”

Mount Zin is a natural reserve, which is located in the center of the Zin phosphate mining plant. A parking place and observation point is located north of the mountain. 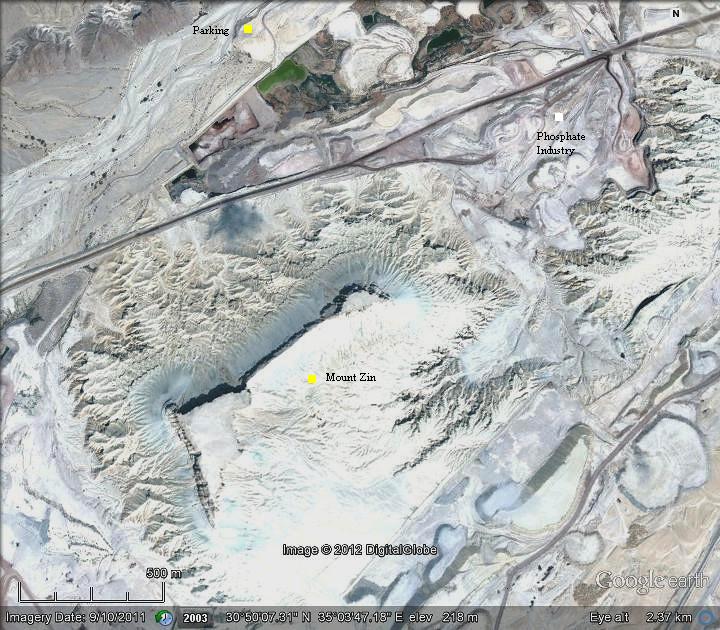 The Valley of Zin starts from Sede-Boker and flows eastwards to the Arabah valley. It was formed by great geological forces and events that shaped the Negev desert.

These events started from the effects of the Tethys ocean covering the area (190-35 million years ago), when sedimentary layers accumulated under the Ocean. Tectonic pressures between the south and the north plates created the mountains and the valleys.

The second phase was the creation of the Syrian-African depression  due to Tectonic pressure between African and Arabian plates (35-22.5 million years ago). This caused the area of the Arabah (Arava), 15km south-east to the valley of Zin, to drop about 500m under the level of the Negev surface.

The third phase was the erosion that created the wide valley of Zin. The Arabah depression drained the soft layers out from the valley of Zin. The valley widened, but some places with harder rock layers remained intact. One of them was Mount Zin, which stands high in the middle of the valley. Its altitude  is 276m above sea level, while the Zin stream is at a lower altitude of 80m (about 200m difference).

During the Exodus, the desert of Zin was one of the stations of the Israelites journey from Egypt to the Land of Israel. There are many references to the “desert” or “wilderness” of Zin.

After the conquest of the Land by Joshua, the valley of Zin marked the southern board of the tribe of Judah.

According to some scholars and traditions, Mount Zin was the location of the burial site of Aaron, the brother of Moses and one of the leaders of the Exodus. The Bible says that Aaron died on the mountain top of Mount Hor (Numbers 20: 22-29): “And the LORD spake unto Moses and Aaron in mount Hor, by the coast of the land of Edom, saying,… and Aaron died there in the top of the mount…”. According to the Bible, there were hundred of thousands of people that gathered around the burial site. Based on  the Biblical description, the probable location for such burial site and place of the Israelites gathering, Mount Hor is Mount Zin.

Note that there are other traditional sites for Aaron’s burial site on Mount Hor, such as Jabal Harun in Petra, or near Mount Sinai in the Negev or Sinai desert. 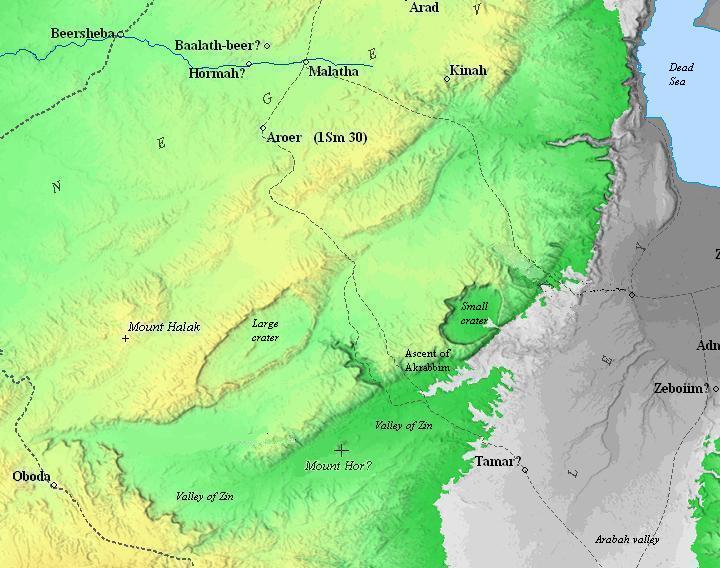 Map of the area  – during the Biblical periods  (based on Bible Mapper 3.0)

A northern view of Mount Zin is seen here. The depression of the lake was created by excavations of the phosphate plant, while the water fills up during the winter. 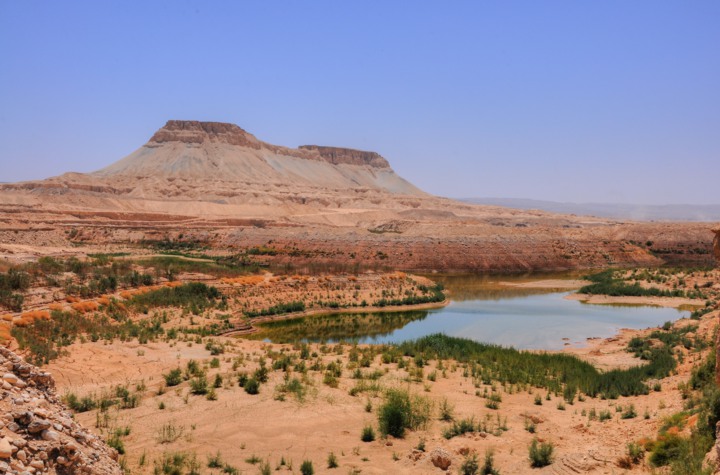 The next picture shows another northern view of the mountain.  Notice the ancient geological layers are exposed along the foothills of Mount Zin.

The rock layers making up Mount Zin are dated to the Eocene period (65-35 million years), when the Tethys Ocean covered the surface. The mountain layers  are made of chalk and clay, with a  harder limestone layer on top. 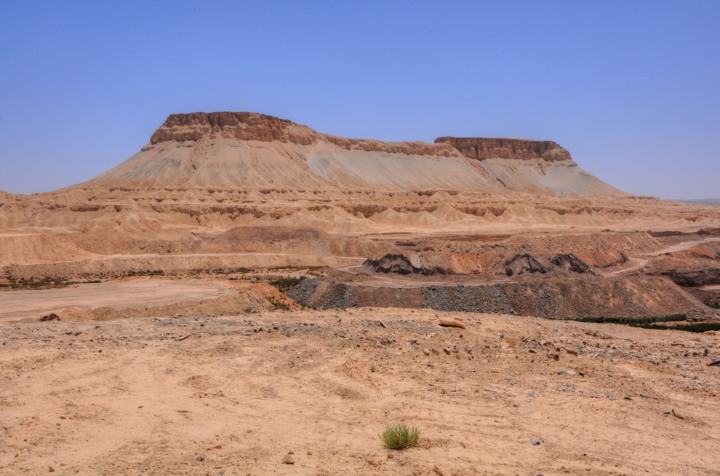 Bulbus is an Arabic name for potatoes. The potatoes-shaped rocks, found in thousands near Mt Zin, were named “Bulbus”.

The large field is located on the south side of the Mount Zin.  A collection of such rocks were assembled around the observation parking place north of the mountain, seen in this photograph. 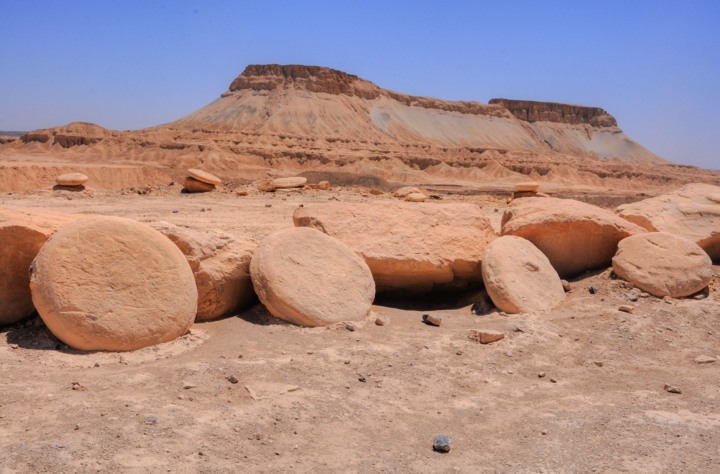 The Bulbus rocks were created 60Million years ago, when the Tethys ocean covered the Negev. In its nucleus is usually an organic remains, such as a skeleton of a fish. These remains laid on the bottom of the sediment. Gradually, minerals of Calcite crystallized around it. The Calcite minerals later dissolved or fossilized the organic matter. 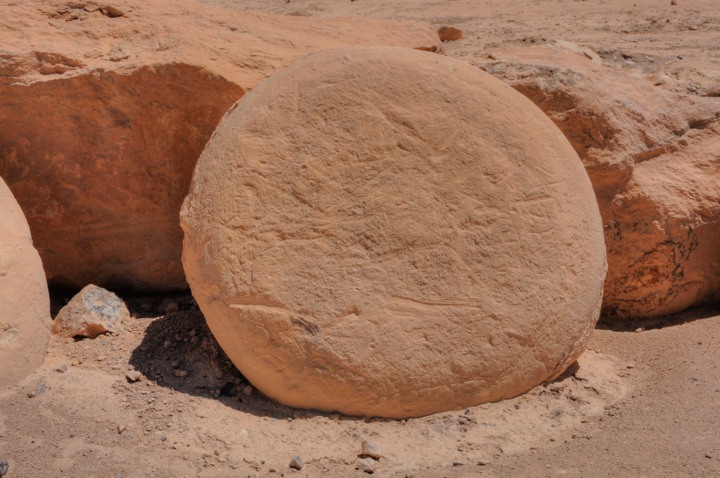 Rather than evolving into a round ball of Calcite, the pressure of the ocean pressed the ball into a potato-shaped rock. 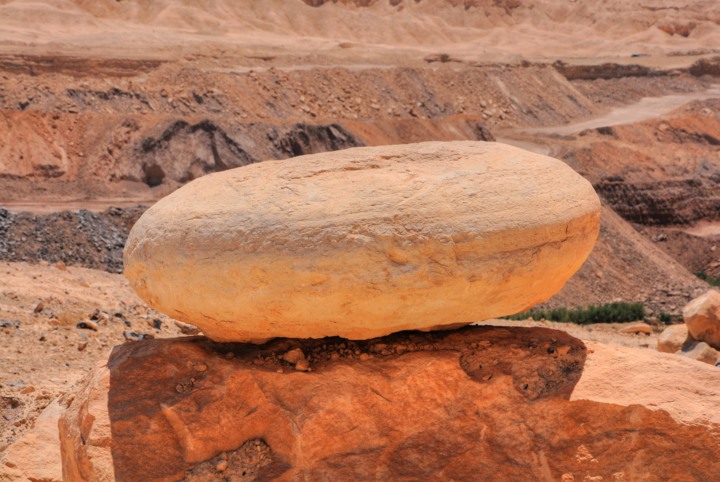 Remains of fossils can be seen among some of the Bulbus rocks. 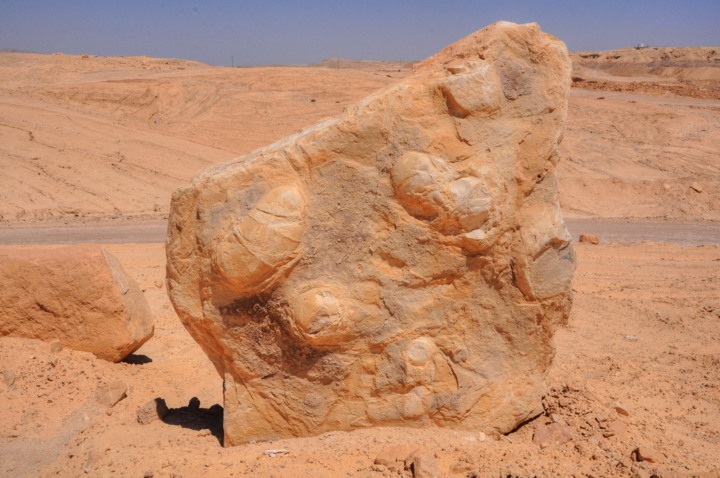 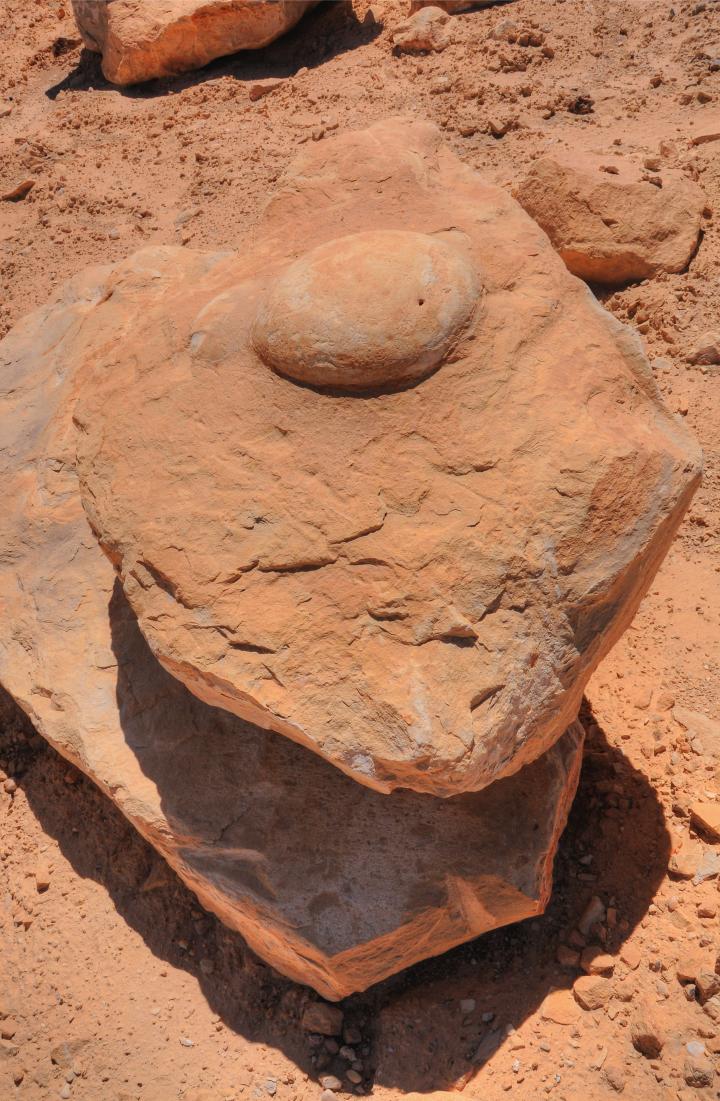 The phosphate mining plant is located near Mt Zin. The phosphates are rich with phosphorus which are vital nutrients for the growth of plants, so they are  used as a chemical fertilizer for the agriculture sector.  The phosphorus is also used for producing laundry detergent softeners, tooth pastes, matches, explosives and other products.

The Zin mining complex is one of the three phosphate plants in Israel (the others are located in Oron and Rotem). These plants  mine every year about 8 million tons of the mineral ore, and sell the products to the local market and to the worldwide market.

The rock deposits, several meters thick, belong to the Late Cretaceous to the Early Eocene geological periods (90-45 Million years ago). They are part of the Mediterranean phosphate belt which extends from Turkey to Morocco.   The phosphates were deposited at the time when the Tethys ocean covered the Negev for the second time, starting at 100 million years ago and ending at 45-35 million years ago.

This road leads to the observation place near Mt Zin, and passes through the area of the plant. Around it are sections of the plant with hills of extracted rocks. 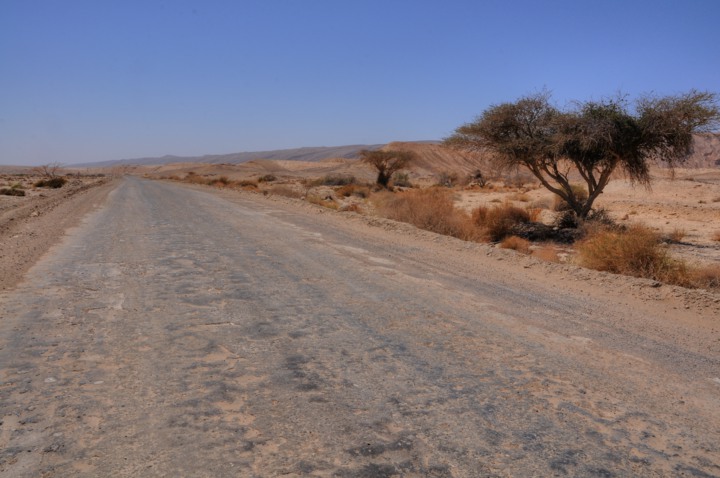 Inside the Zin valley, on the side of the phosphate road, are remains of dead trees. One of them caught our attention… 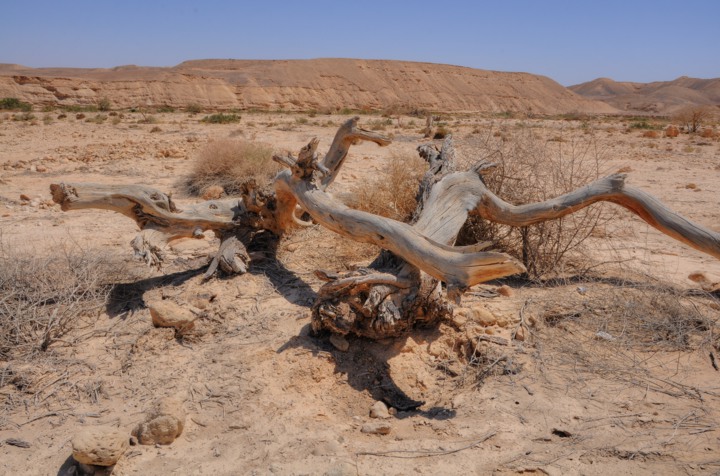 Below are some views of the remains of the tree. 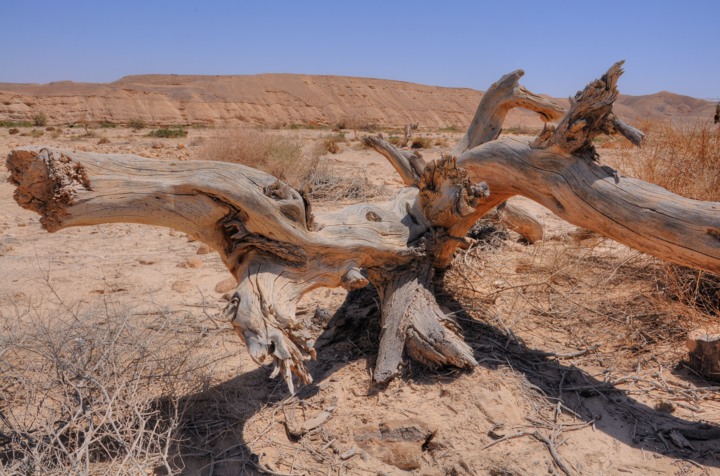 A limb looking like the head of a horse or a dog (imagination helps here): 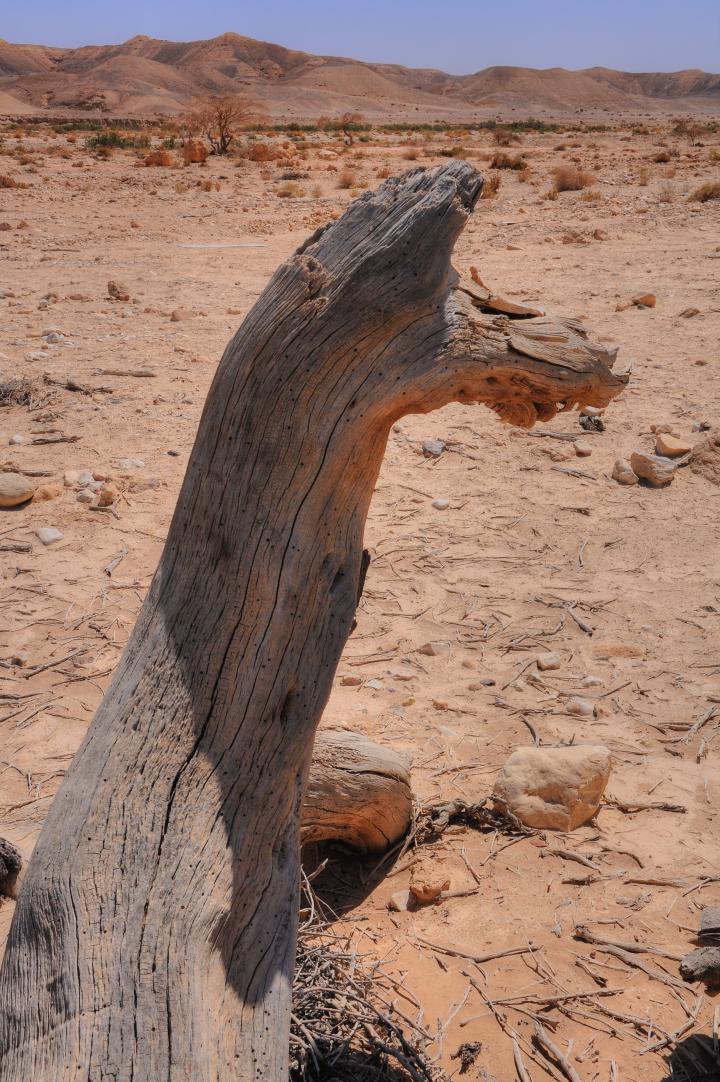 In the closer background is the main road from Ma’ale Akrabim junction (road #227) to the phosphate plant. Behind, in the far background, are the cliffs above the north side of the valley of Zin. The bible gives the same directions when describing the borders of the Land of Israel (Numbers 34:4): “And your border shall turn from the south to the ascent of Akrabbim, and pass on to Zin”. 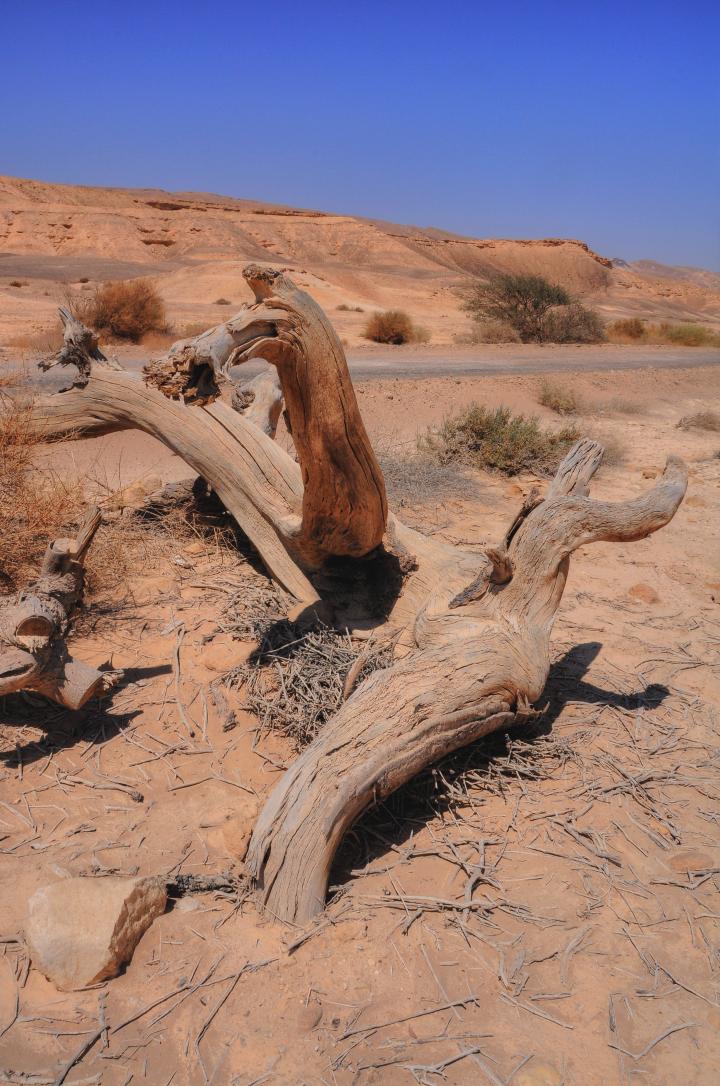 Numbers 13:21:  “So they went up, and searched the land from the wilderness of Zin unto Rehob, as men come to Hamath”.

Numbers 20 1: “Then came the children of Israel, even the whole congregation, into the desert of Zin in the first month: and the people abode in Kadesh; and Miriam died there, and was buried there”.

Numbers 33 36: “And they removed from Eziongaber, and pitched in the wilderness of Zin, which is Kadesh”.

Numbers 34 33, 34: “Then your south quarter shall be from the wilderness of Zin along by the coast of Edom, and your south border shall be the outmost coast of the salt sea eastward: And your border shall turn from the south to the ascent of Akrabbim, and pass on to Zin: and the going forth thereof shall be from the south to Kadeshbarnea, and shall go on to Hazaraddar, and pass on to Azmon:”

Joshua 15 1: “This then was the lot of the tribe of the children of Judah by their families; even to the border of Edom the wilderness of Zin southward was the uttermost part of the south coast”.

Mount Hor is the burial site of Aaron, brother of Moses, during the time of the Exodus.

BibleWalks.com – following the paths of the Bible