A geological, nature and history desert park, the center of ancient Egyptian copper mines. In the site are mining workshops, camps and installations, shrine and rock drawings from the 13-12th Century BC.

Timna is a large geological, nature and history park (60 square KM) located north of Eilat. The stone formations create a dazzling display of rock formations which are based on granite (on  Timna mountain in the center) and soft red and white sandstones that surround the center in a horseshoe type shape.

In this park are remains of an ancient Egyptian and Israelite copper mining industry, including workshops, furnaces, tunnels and shafts, shrines, mining camps and rock drawings. Most of these are dated from the 14th-13th to the 9th-10th Century BC.

In the center of the park is another Egyptian mining center called “Solomon’s pillars“,  which also has important findings from the same period.

Copper started to be in use in the Chalcolithic period (45-32 Century BC). The name of the period – Chalcolithic – came from the word “copper” (Chalcos in Greek).  In those days the copper was collected on the surface, and only at the last centuries of the period that they started mining the ore under the surface. These were probably one of the first mines in the World, using stone tools to dig into vertical shafts and horizontal tunnels.

The enhancement of the copper to Bronze, using additives such as tin, came at later phase, and the period is known as the Bronze period (32 Century BC to the 12th Century BC). The perfected metal was stronger and more durable, and gave its possessors a military and technologic edge. The growing demand for bronze drove the Egyptian to perfect the mining industry, and it reached its peak in Timna during the 14th to 12th Century BC (Pharaohs Seti I thru Ramses V) . The Egyptians performed a series of geological surveys, digging thousands of holes in the rocks of Timna. They constructed vertical shafts and arrays of horizontal tunnels, and established mining installations, camps and worship shrines, including the Hathor shrine in “Solomon Pillars” site. They assembled a workforce based on local and foreign workers, mostly from nearby Midian (Moses’ father-in-law, Jethro, was a Midian priest). The copper nuggets were then shipped through the ancient harbor south of Eilat.

Recent studies in the ancient mines found evidence of mining activities during King Solomon reign around the 10th-9th Century BC, proving the Biblical accords. Textiles fragments of the miners, pottery shreds and other findings have been identified in the mines belonging to the 10th Century. New high precision measurements proved that the peak of the mining activities were held at the times of the Judean Kingdom. However, during this period the copper mining in Timna has gradually been suspended and carried in other mines, such as Funon (Wadi Faynan) in the north part of the Arabah valley.

At the Roman period (1st-2nd Century AD) the copper mining in Timna and Funon was renewed,  after perfecting the mining methods. Mining continued during the early Arab period.

The mines were modernized in 1955 in a plant located south to the Timna valley ,but the production was stopped in 1984 due to low copper prices. There is a hope to reopen soon again – continuing the 6,000 years of copper mining.

The valley is located 25KM north of the city of Eilat, on the southern tip of Israel.   It is easily accessible from the main road. The valley is a nature and history park, a popular tourist and hiking site. 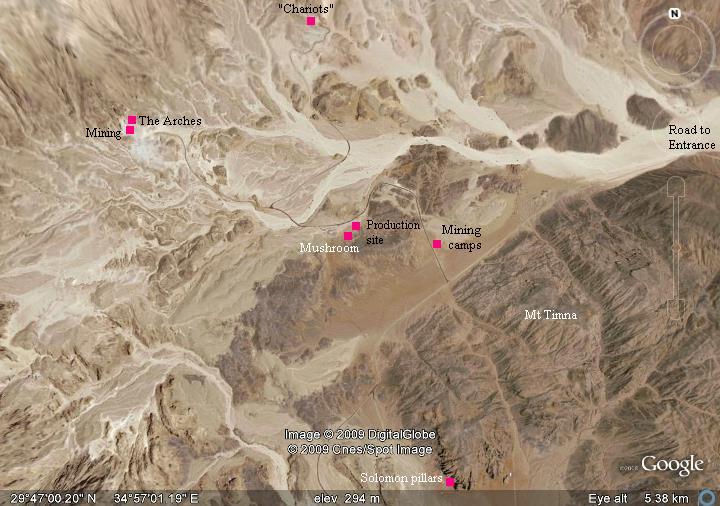 (a) Mushroom and workshops:

One of the impressive rock formation in the valley is the giant “mushroom”, seen below. This sandstone “sculpture” was created by nature, and there are other “mushrooms” in the vicinity. This one is adjacent to the ancient copper mining facilities. 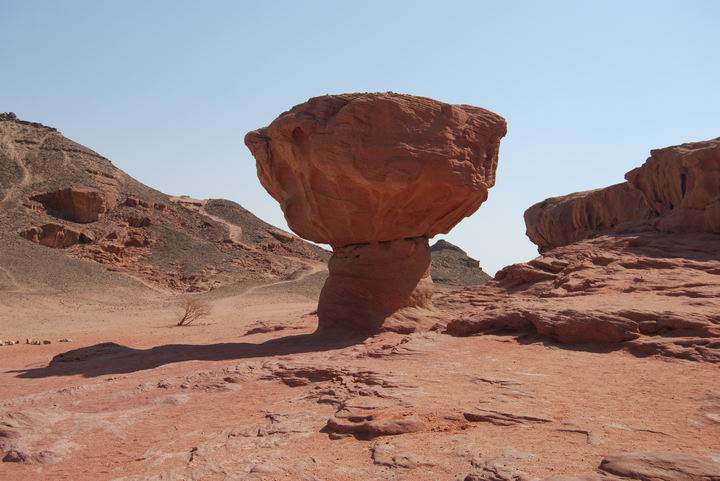 The photo below shows an overview of the area of the mushroom, which can seen on the upper right (south) side.  The area was a center of the Egyptian copper production, dated to the 12-13th Century BC. The front fenced area is a workshop and storage, and behind it is a copper smelting furnace. On the left is the miners’ temple, and on the hill on the left there are additional sites which are currently excavated. 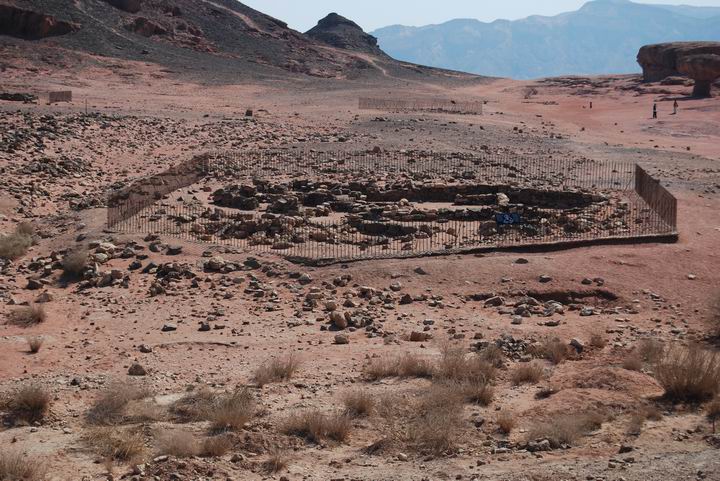 A closer view of the first area, which included workshops, storage rooms for raw materials (charcoal, copper ore, clay, water and other) . 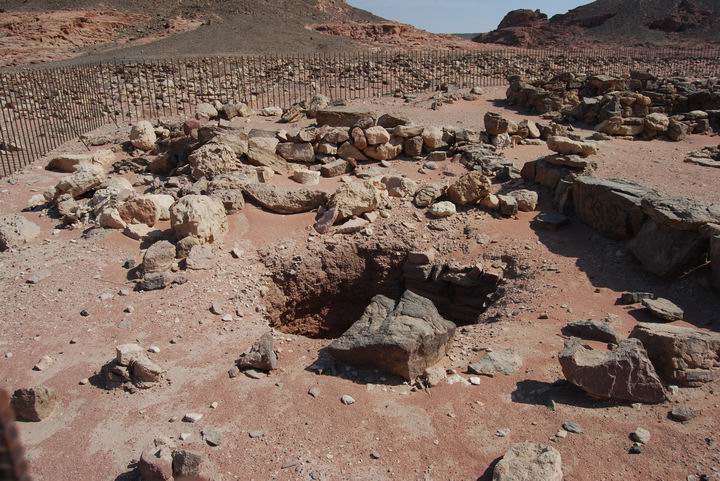 Another view of the workshops, where the copper ore crushing  installation and storage is located. 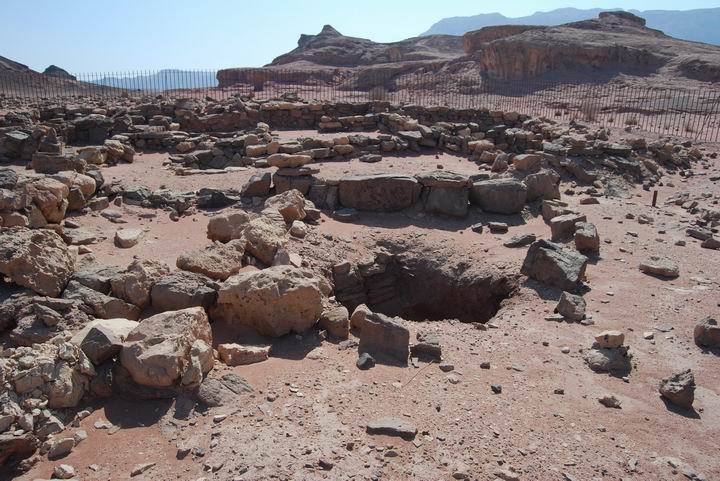 South to the workshop is the copper smelting furnace, dated to the 13-13th Century BC. The raw materials were poured into the stone furnace, bellows were used to pump air into the fire, which melted the ore into copper nuggets. The furnace produced 5KG metal within 10-12 hours. 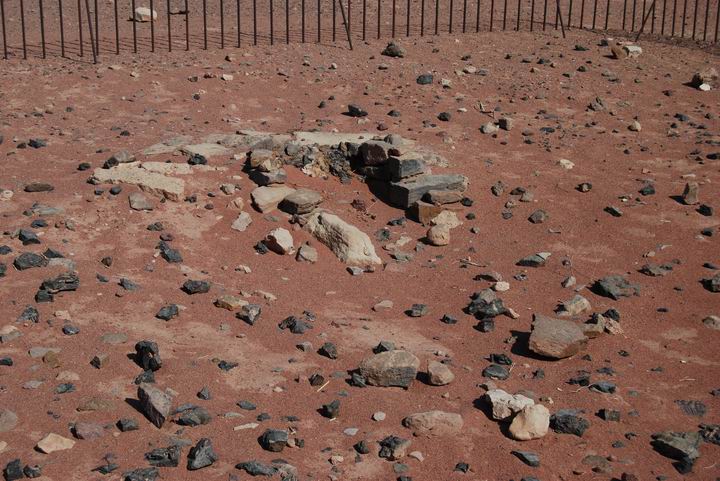 East to the workshops is a shrine, which serviced the Egyptian miners. It contained a basin (in the rear), standing stones (behind the basin), an offering table (in the center). The findings included the bones of the sacrificed animals, fruit remains, clay and stone vessels. 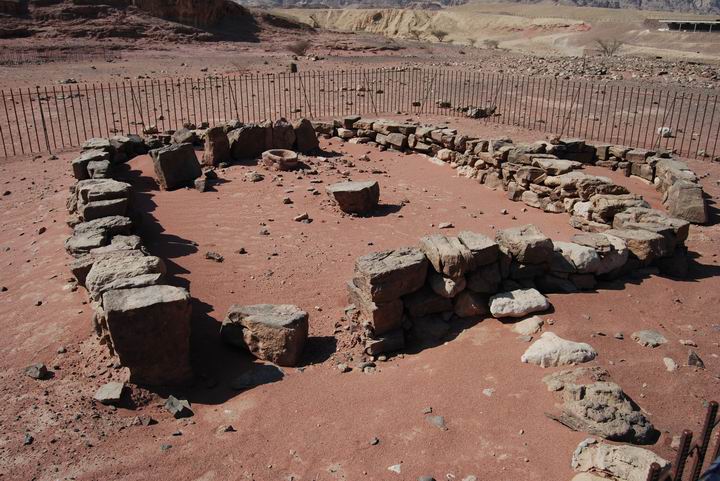 In the Timna hills the Egyptian miners cut into the hills to dig out the copper ore.  This is what they were looking for – the greenish powder, hidden in deposits and veins between the rocks. 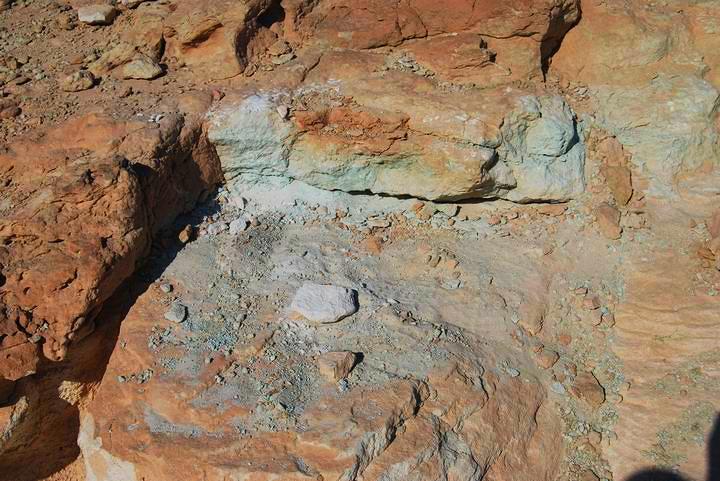 There are thousands of mining holes and tunnels in this area, such as seen in the arches visitors center – a mining tunnel dated to the end of the 2nd Millennium BC. The miners followed the green veins of the copper ore, extracted it, and hauled it to the smelting centers. 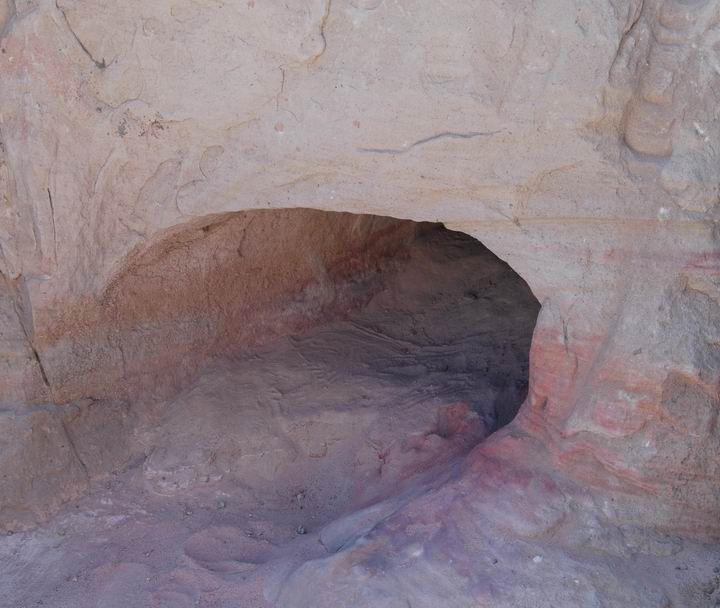 The ancient miners used stone tools to dig into the soft sandstone rock, as on display in the visitors center. 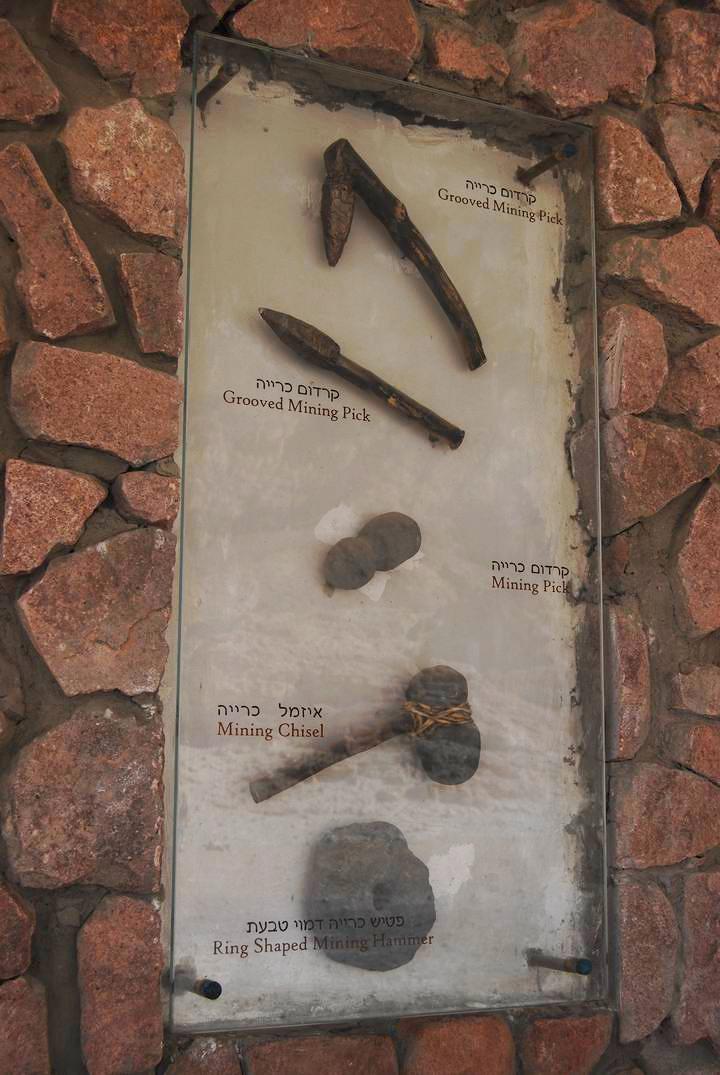 Another example of a mining tunnel can be seen in the rock drawings site. The photo below shows the entrance to one of the shafts used by the miners. Additional holes are located in the rock and provided air for the miners who dig through the rock. 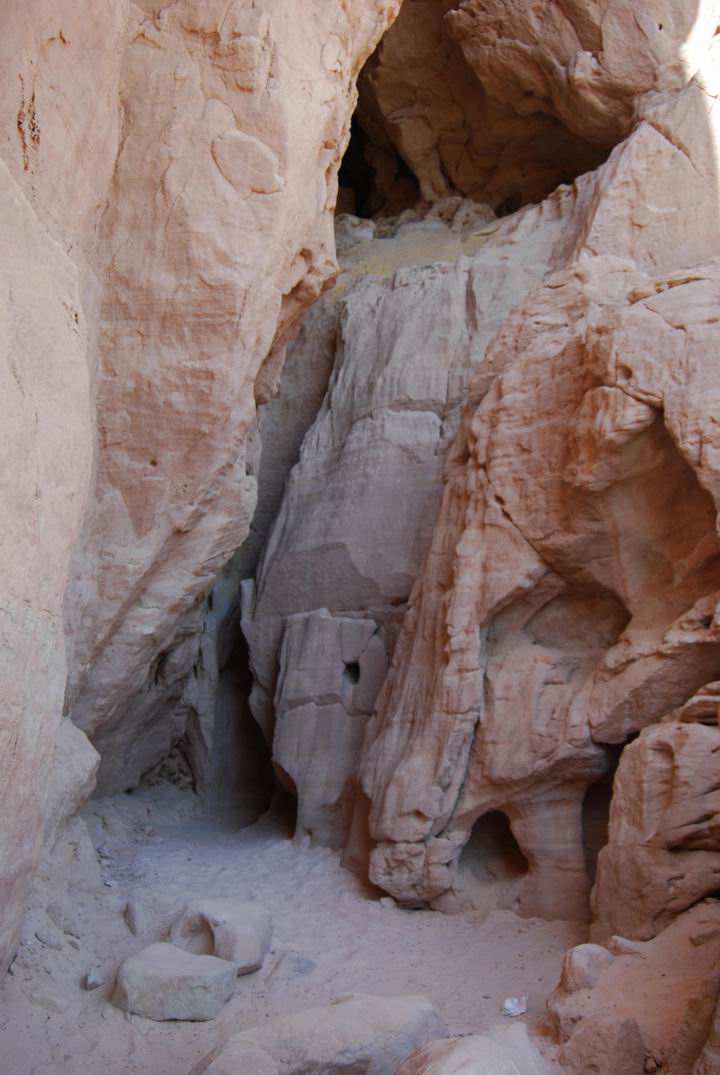 This is a typical vertical shaft that was used by the miners to move between the tunnels they dug into the rock above and below the ground. There are thousands of tunnels dated to about 3,500 years ago. 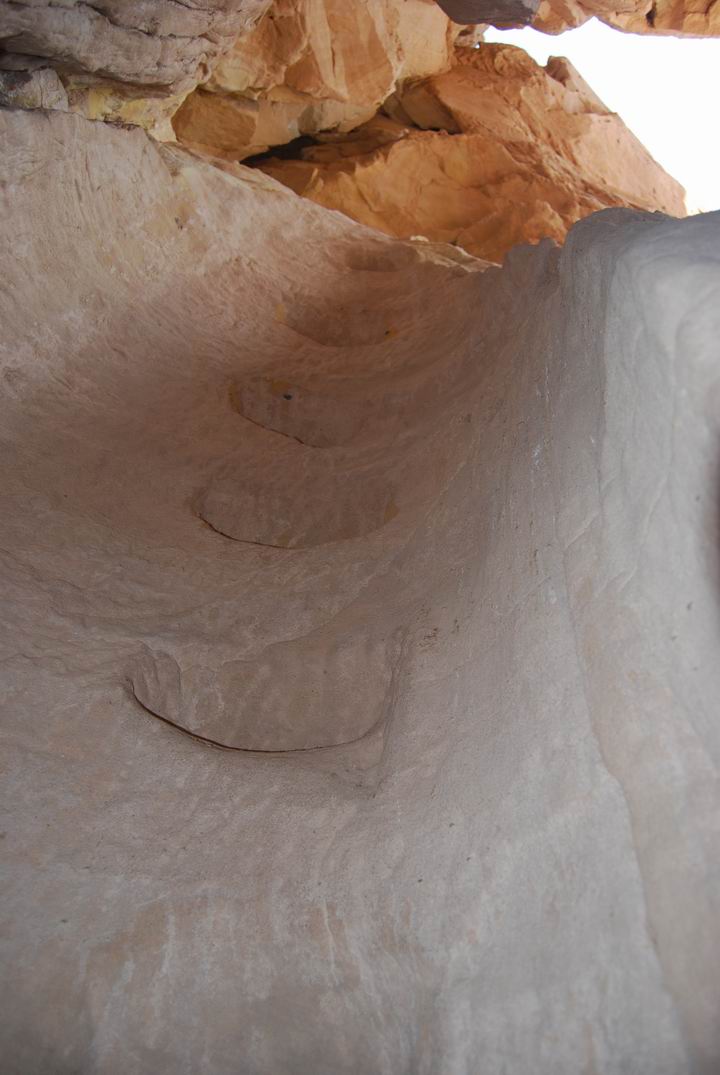 The photo below is the “arches” site in Timna. In addition to the beautiful rock formations, where walking paths make it easier to access the site, there are many mining holes. On this site there are dozens of holes dug into the ground. 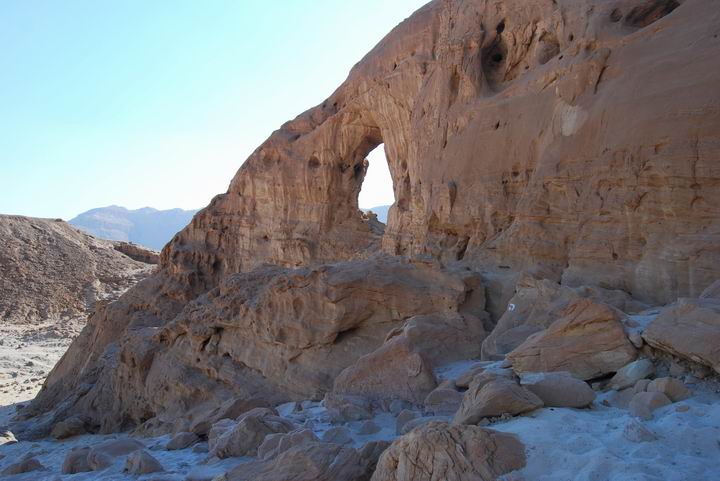 Some of the holes are covered by sand. They are entrances to the array of tunnels deep down under the ground level. The miners used the hewn ladders to climb down the shafts into the horizontal tunnels. 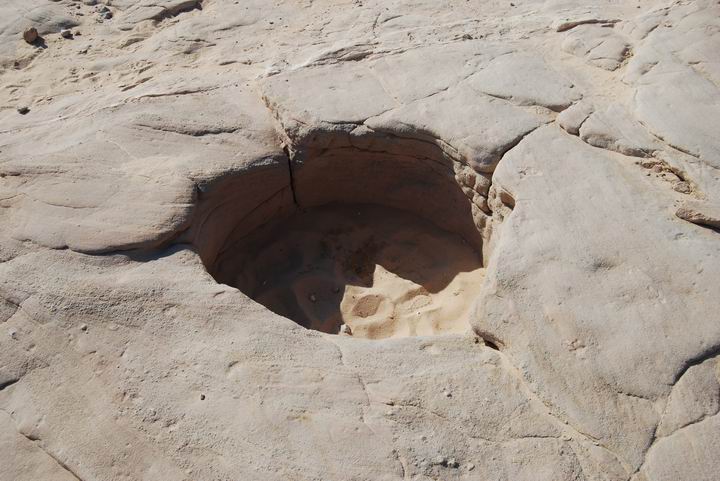 The photo below shows many holes that are dug into the ground. Some of the holes are covered by white lids to prevent falling down into the deep holes. 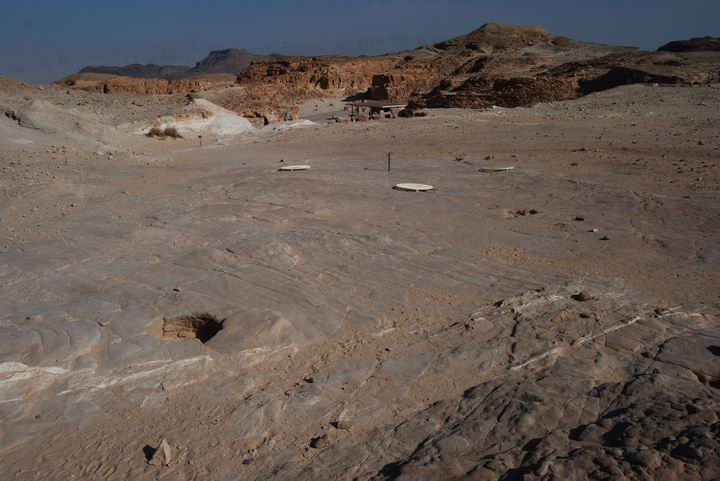 Around the area of the mining areas are ruins of the houses of the Egyptian workers. In the photo below are dozens of houses that are located east to the “mushroom” copper smelting site. 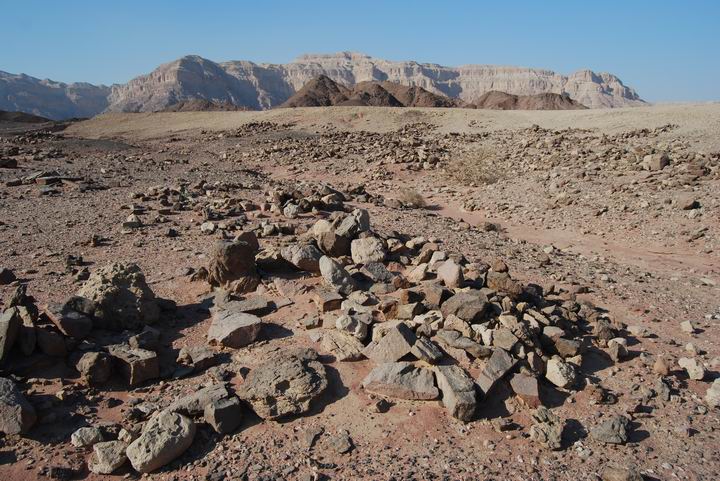 A macro look: On the soil around these ruins you can see many small copper nuggets, the pieces that remained from the copper production. You can see these pieces in green color among the other rock fragments (such as the quartz and granite stone fragments, and the sand grains of the white & red sandstone ). 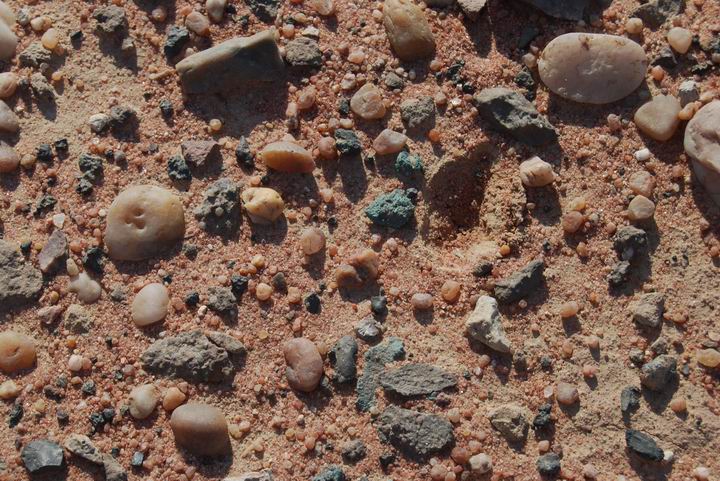 The ancient miners left traces of their art works in the areas where they worked. The photo below shows the area on the north side of the Timna valley (called “The Chariots”), where a cluster of rock engraved drawings were found. 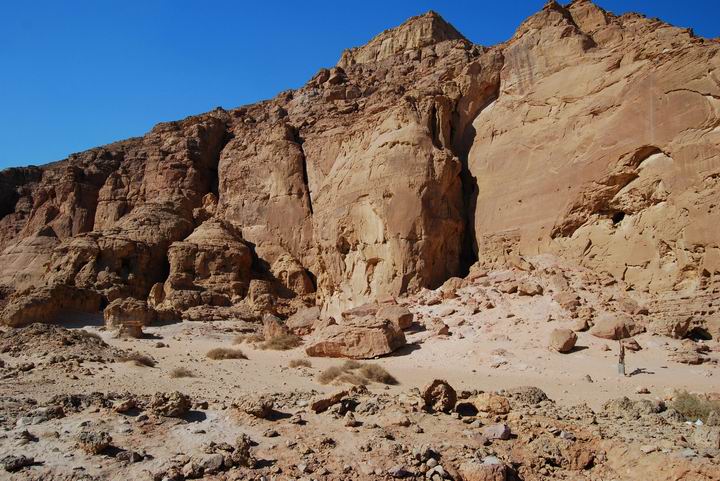 On the face of the external rock, dozens of rock drawings can be seen. Most of the drawings are of animals (Ibex and ostrich, deer) and of hunters. On the rocks around are mining holes and tunnels. 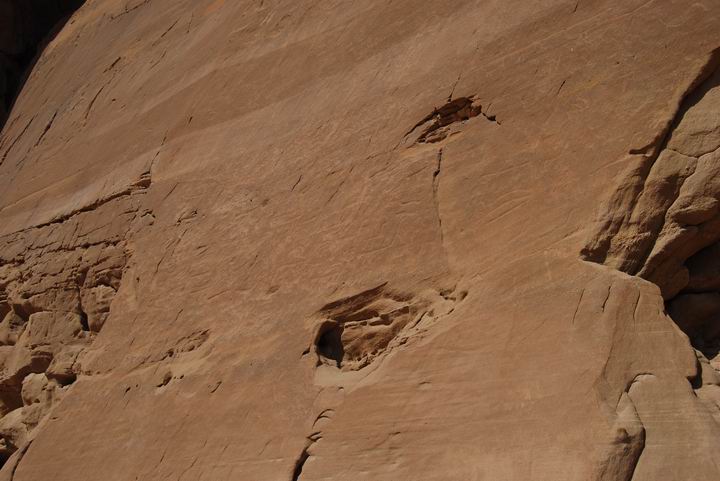 The entrance to the “chariots” drawings is seen in the photo below. 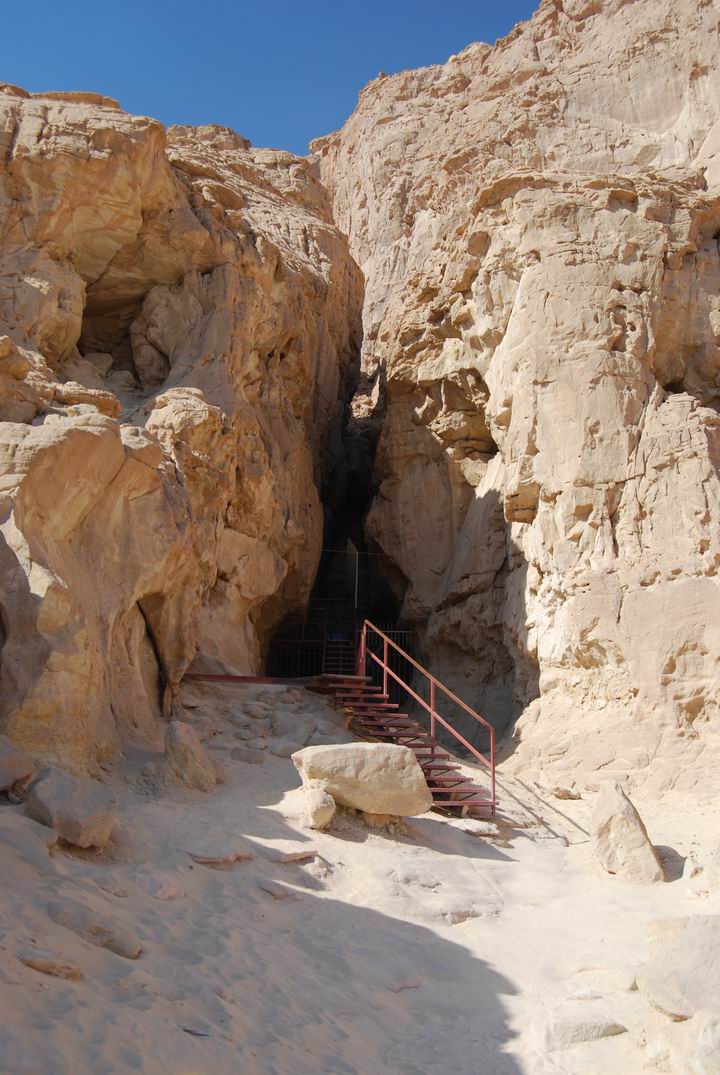 Most of the drawings in this cluster are of animals (Ibex, Oryx, ostrich, snake and dogs), as well as hunters and soldiers (holding bows and arrows). 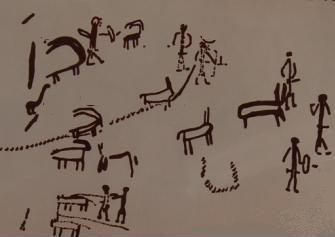 There are two types of men depicted by these drawings:  armed Egyptian  soldiers,  and mining workers and hunters that came from nearby Midian (in Arabia).

These engravings were created by sharp points and some lines used to have colored paints (light grey and red). 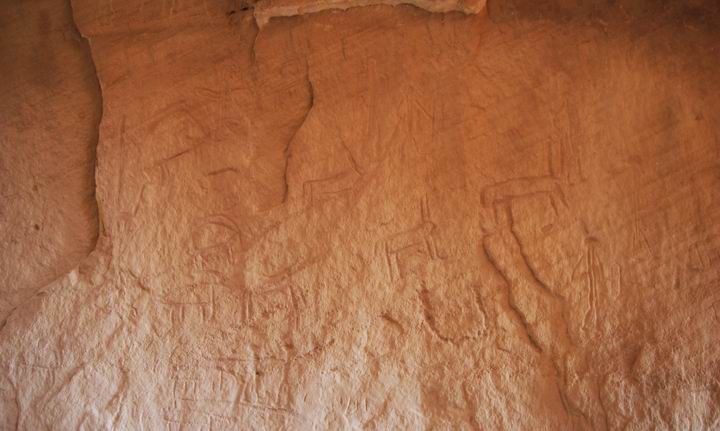 The name of this site came from the drawings of Egyptian chariots, dated to the 12-13th Century BC. The chariot is seen as a pair of wheel on the bottom left side, and two armed men drive the chariot which is pulled by a pair of oxen. 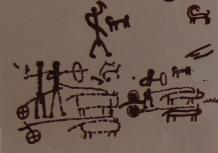 There  are several more chariot drawings here and on the external rock surface. 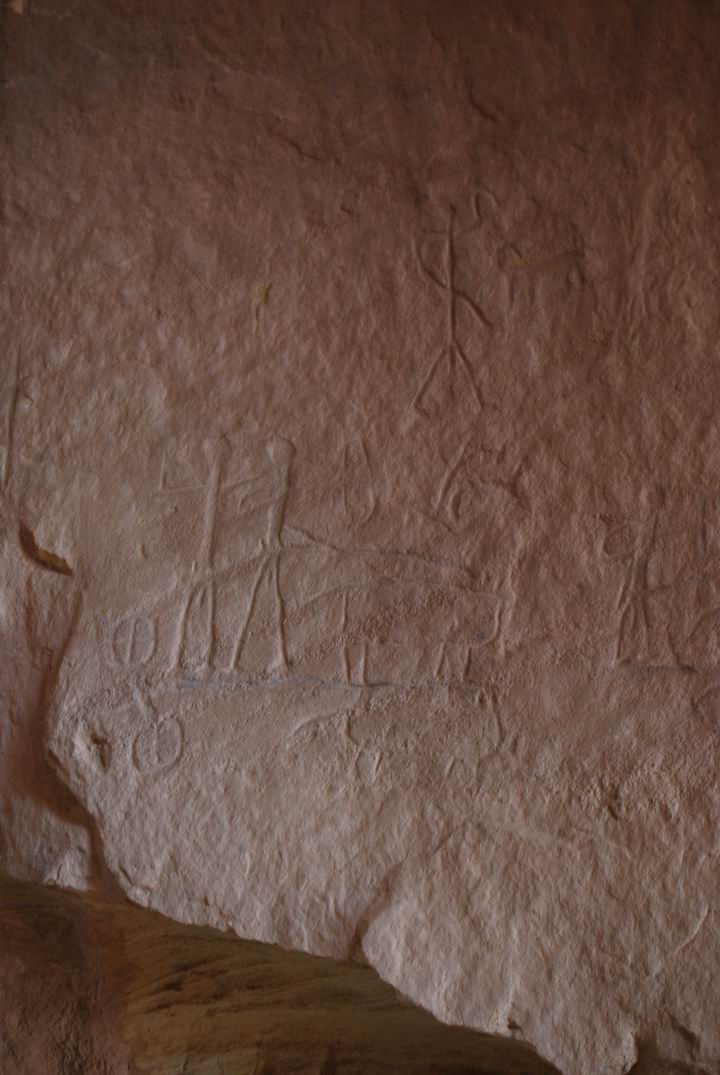 Timna is one of Esau’s dukes in the land of Edom (which is located on the hills of Jordan facing the site).

“And the children of Lotan were Hori and Hemam; and Lotan’s sister was Timna“.   “And these are the names of the dukes that came of Esau, according to their families, after their places, by their names; duke Timnah, duke Alvah, duke Jetheth”.

“And the dukes of Edom were; duke Timnah, duke Aliah, duke Jetheth”,

This page was last updated on July 5, 2019 (text corrections)