An artificial mound located in the central Jordan valley, that guarded a major crossing point of the Jordan river.

(Joshua 2:7): “And the men pursued after them the way to Jordan unto the fords…”.

The site is located 0.5km north of Kibbutz Kfar Ruppin and 3.5km south of Kibbutz Maoz Haim. The hill rises above the Jordan river  that flows near its eastern foothills. It is located between the streams Nahal Hobari (south) and Nahal Masil el- Jizl (north). This steep mound has a narrow summit, with an area of 100m by 25m.  Its height is 241m under sea level,  about 34m above the river bank. 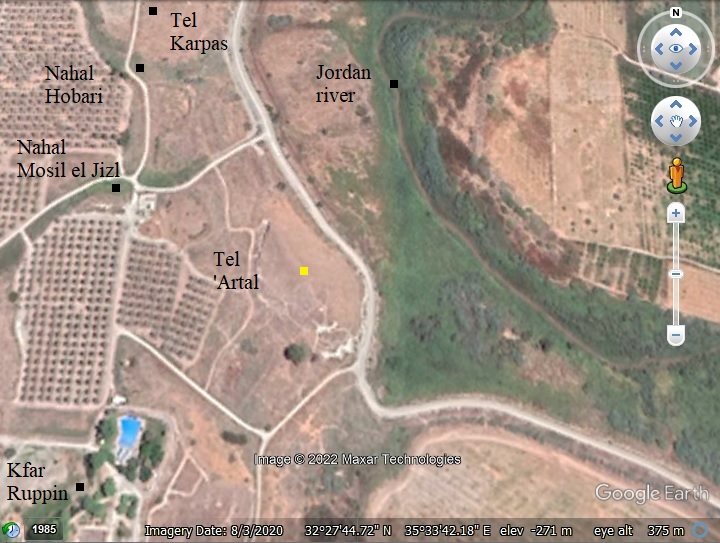 Flintstones collected here were dated to the Upper Paleolithic and Chalcolithic period.

Ceramics collected on the mound and on its foothills were dated to the Early Bronze (many), Intermediate Bronze, Mid Bronze II, Late Bronze (many), Iron I, Iron II (many), Persian, Hellenistic, Roman, Byzantine, Early Muslim, and Mameluke.

The cities and roads during the Canaanite and Israelite periods are indicated on the Biblical Map below, with Tel Artal marked by a red dot on the west bank of the Jordan river. 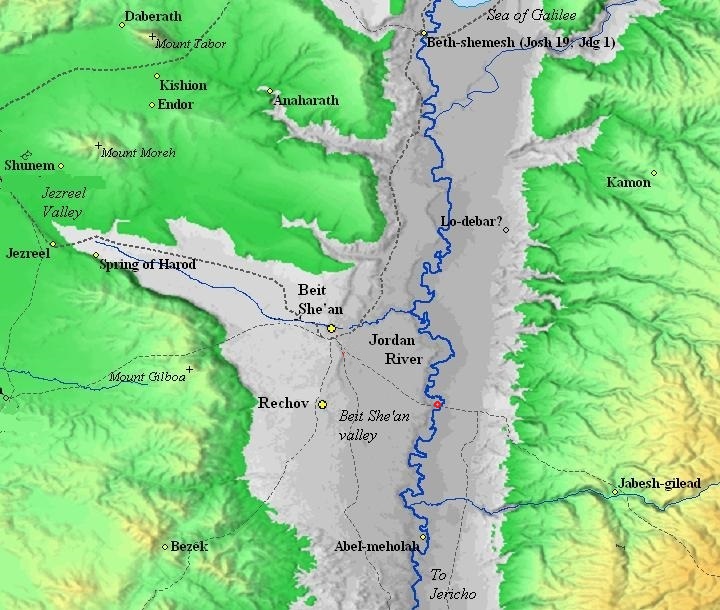 Map of the area around Tel Artal – during the Canaanite and Israelite periods  (based on Bible Mapper 3.0)

David Dorsey (“The roads and Highways of Ancient Israel”, 2018, pp.111-112) suggested that a east going highway (marked T7c), connecting Jezreel and Beit She’an thru the fords near Tel Artal, was the major route used to cross the Jordan river. This route is marked in the map as a dashed line that crosses the Jordan river, passing near the red dot. The main river crossing was named Makhadet esh Sheikh Daud (ford of Sheikh David). It is near the Bronze/Iron age sites of  Tel Artal, Tel Karpas, Tell el Qitaf, Tel Masad and Tel Rehese in Kefar Ruppin. The highway connected on the other side of the Jordan river to the city of Pehel (Pella), and was the main crossing point in this region. It continued to the Transjordan highlands and on to Damascus and beyond.

An ancient Roman highway (from Scythopolis/BethShean to Pella/Pehel)  passed on the north side of Tel Artal. It probably traced the route of Nahal Hobari that flows between Tels Karpas and ‘Artal.

A group of 5 Roman milestones were found during the PEF SWP survey in Umm el-‘Amdan (K. Ruppin map 67, site 86). The PEF survey wrote about this find (Vol 2 p. 130): “Several fragments of rude pillars, lying in the water by the road. They seem probably to be Roman milestones”. Their location was 1.5km NE of Tel ‘Artal, and 5.8km from  Scythopolis, on the north bank of Nahal Hobari. Two of the milestones marked the 4th mile from Scythopolis to Pella, which is the distance where they were found (5.8km = 4 Roman miles). The group of milestones were transferred to Gadash Gilad shed.

The site was examined in the PEF survey (1866-1877) by Wilson, Conder and Kitchener. The surveyors assumed it was a natural hill. They also ignored the other Tels around it.  Their survey report was short (Vol 2, p. 128):

“Tell esh Sheikh Daud—Possibly a natural mound; a ruined Mukam of modern masonry exists near it”.

A section of their map is shown here. Notice the  serpentine shape of the river at this point. 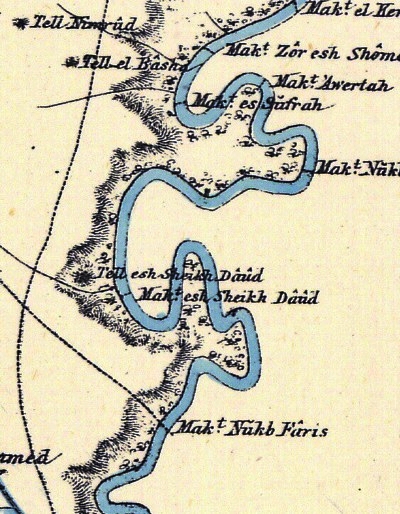 A 1940s British map shows the area around the site with more details. The site is marked here as “Tell esh Sh. Daoud”. The Jordan river passes on its eastern side. Its course changed a bit (moved slightly east) as marked by the purple colored parallel lines that were drawn as corrections.

A number of other Tels (6) are marked around it. The number of ancient sites in this small area indicate the importance of the area during the antiquities.  This is one of the most highly concentrated areas with Bronze/Iron Age ruins. 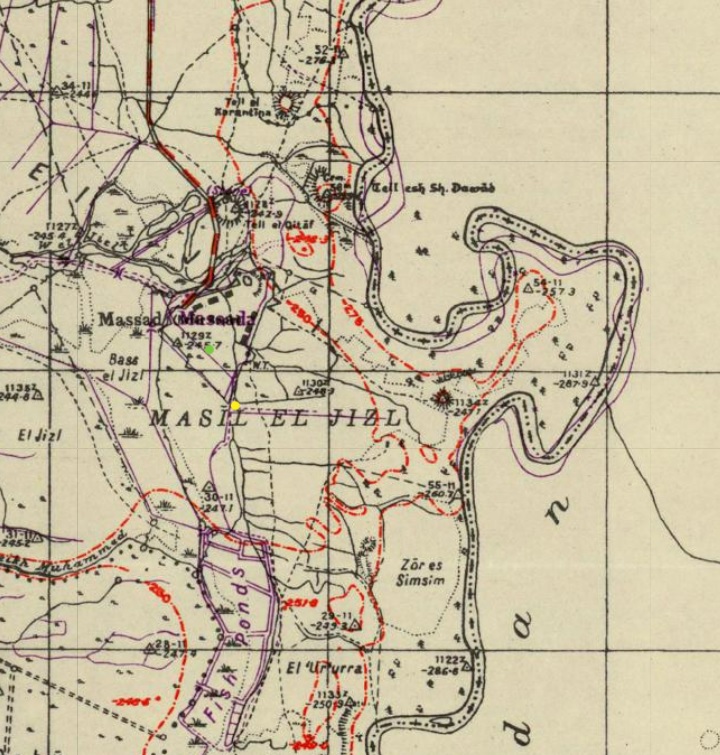 “Tell Esh Sheikh Daoud – Only one tell is marked on the map and that not the most important. Actually there are not less than six grouped together, the largest lying to the South of that marked on the map and having on the top several Moslem graves. Right on the summit is a trigonmetrical station for the new survey, which is marked by a beacon. The other four tells lie to the West and South of this and one of them has an occupied Arab house upon it. This settlement was evidently one of great importance” Visited 27.5.1922″.

“Due East of Sheikh Daoud a tongue of high ground runs North into a Loop of the Jordan, On this are two tells one on the tip and the other at the root. Little pottery was seen on the former and its possibly natural. Neither is marked on the map. Visited 27.5.1922”.

In 1938 a Kibbutz, Kfar Ruppin, was founded on nearby Tel Massad.

In May 1939 the British army requested to build a pillbox fort on the hill, but the archaeological inspector denied this request unless it was approved by the director of Antiquities. It was not…

A survey in 1942 mentioned that there are some graves on the top.

“A high artificial mound, moderate size. It is prolonged in shape running parallel to Jordan river (N-S). Potsherds of Bronze Age and later on … on surface. The Jordan river to E is fordable in two places. It lies nearly half was between Scythopolis and Pella (Tabaqat Fahl). It is most probable that the Roman road passed nearby. To the W. there is a flat mound, artificial appearance, called Tell el Qatif. Another small mound is standing to N.W…  Condition: the site has not been cultivated. – RWH 9.1.46.”

Tel Artal is accessible by car from Kfar Ruppin. However, a section of the road is not permitted for entrance since it is on the Jordanian border. The restricted section is marked by signs.

Tel Artal is seen in the following view from the north side. This steep hill rises above the area, surrounded by water from three sides – Jordan river on the east side and streams  Masil el- Jizl and Hobari on the north and south sides. 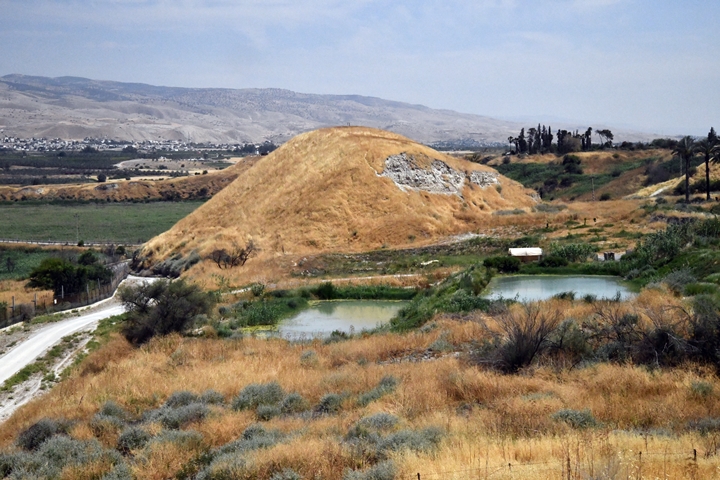 The stream on the north was converted to fish ponds. 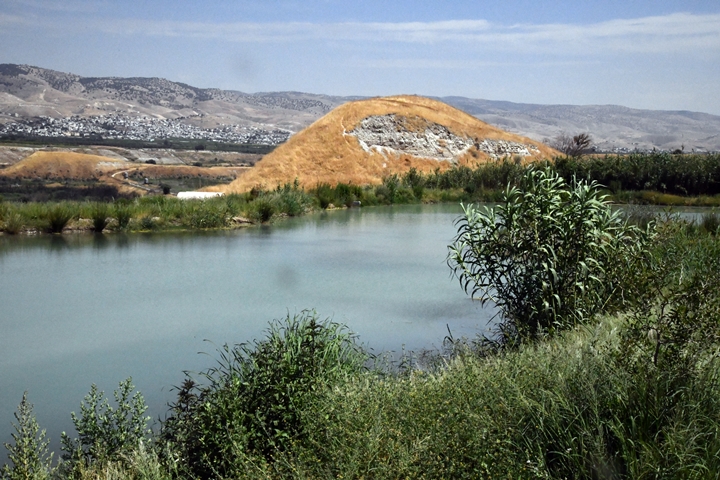 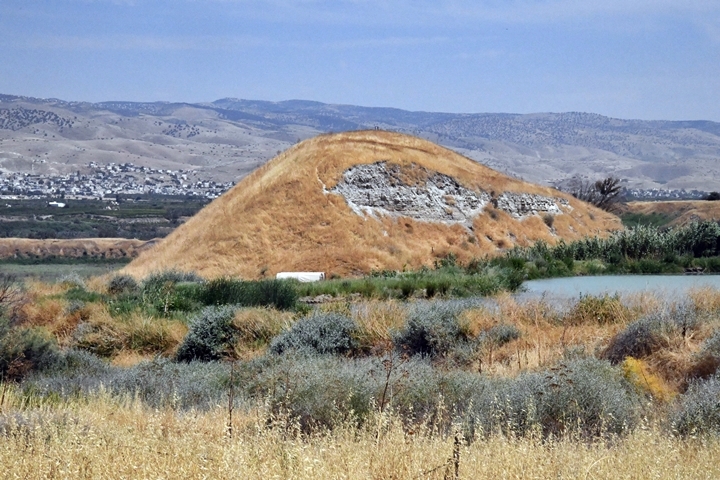 Tel Artal is seen here from the north east side, observed from a hill that is located on the eastern bend of the river.

On the hills around here (IAA survey site #94 – Halashon – the tongue) the sherds were dated to Iron Age and late Roman/Byzantine period. 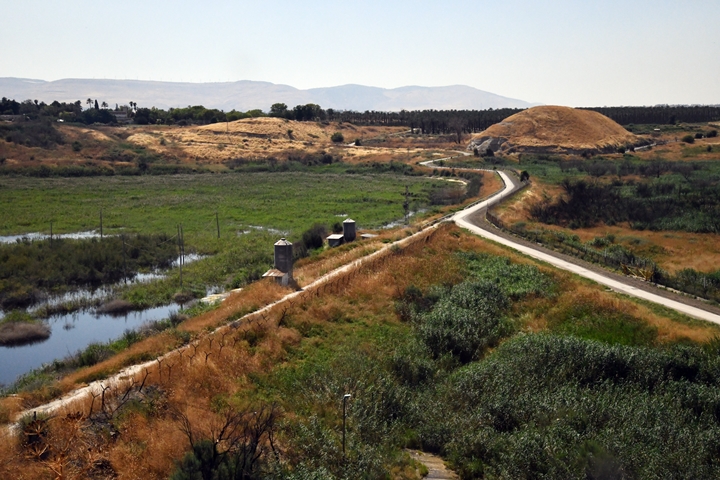 A closer view of Tel Artal is seen here from the road. 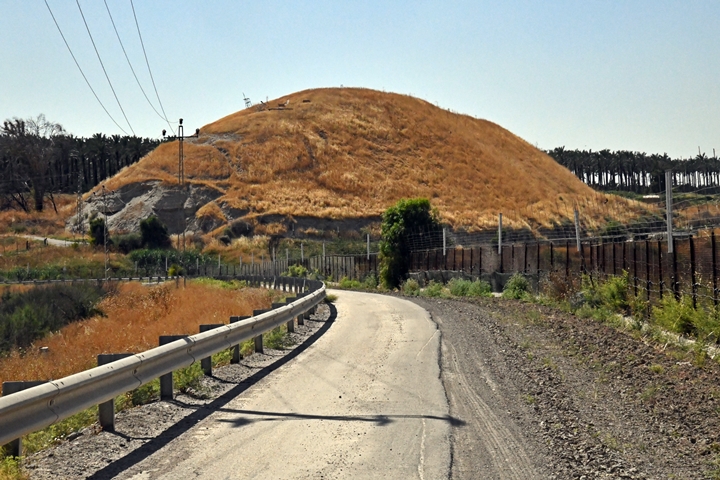 The road cuts on the eastern side of the Tel’s foothills. Archaeologist Ayelet Goldberg-Keidar, who led the short survey of the site, points to the northern edge of the summit. 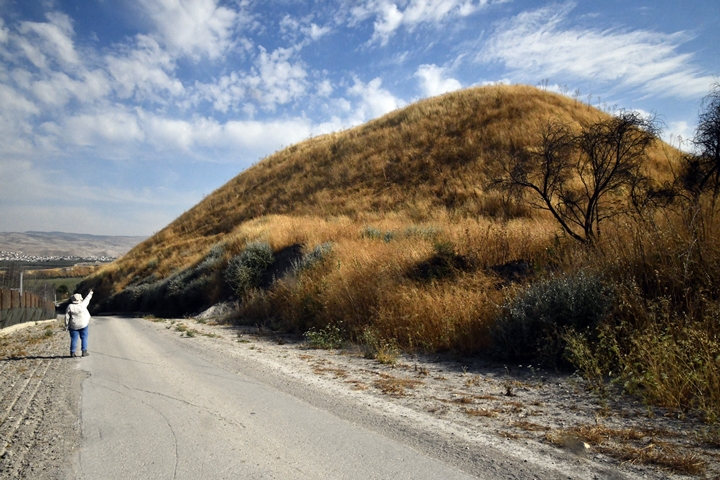 The Jordan river loops around, flowing from the side of Tel Artal towards the east. A small lake formed inside the loop.

Tel Artal is seen here in the right background. On the left background is another multi-period Tel – Horvat Daveka (IAA survey site #79).

This views is from another Tel – named Horvat Zarom (IAA survey site #76). It is a small hill, 2 dunams in area, with ceramics dated to Early Bronze 1, Middle Bronze 2, Late Bronze, Iron 1 and 2 and Byzantine periods. 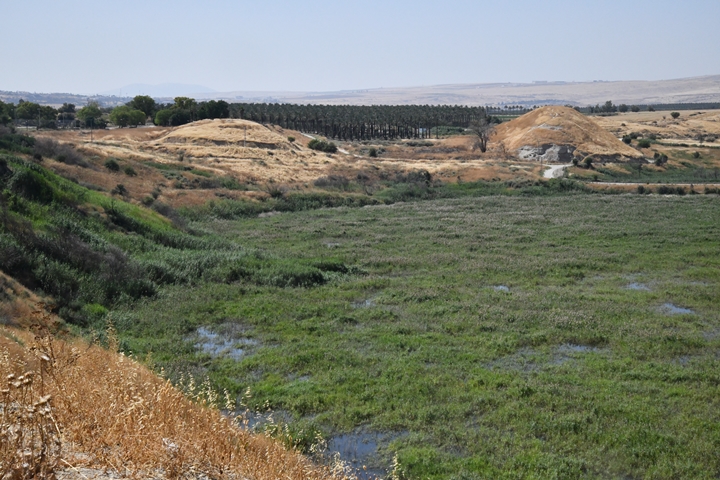 Ayelet and Uncle Ronnie ascended to the summit from the south side. 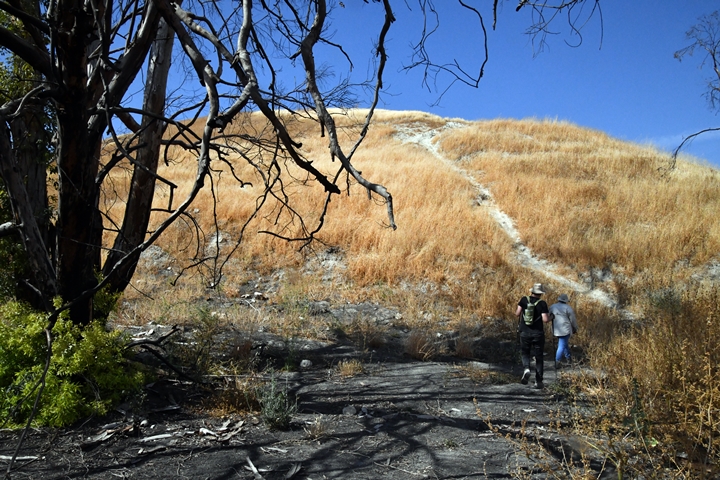 This is a very steep trail and dangerous. After climbing to the summit they realized that there is a better trail to brave the hill. 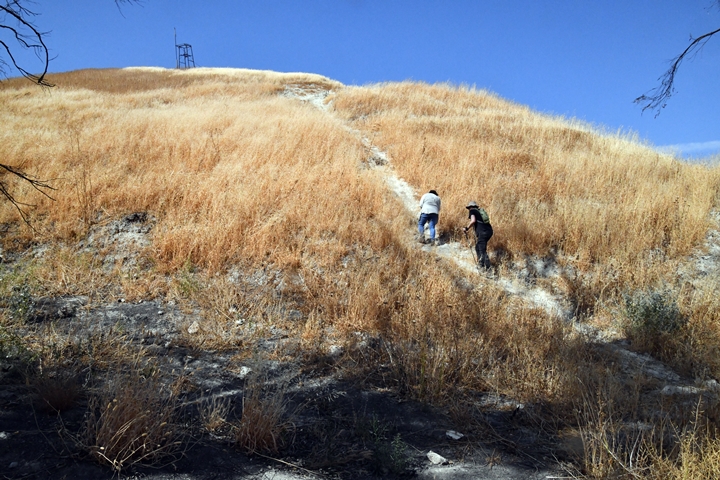 On the summit was a Muslim graveyard, including a shrine of Sheikh Daoud.

A small metal sculpture is seen here, standing on the southern side of the summit. It consists of a metal chain and a bird.

In the late 1980s Danny Zayit, a sculpture  from Kfar Ruppin, built an environment monument with the help of Jews and Arab youths. The environment monument was constructed with local stones that were laid across the southern foothills, in order to symbolize peace between Jews and Arabs. The stones were pulled up the hill with a pully and a rail track. His art  work consisted of a form of a giant arrow made of stones. The ‘arrow’, expressing hope, pointed to the sky and towards the east. This monument gave Tel Artal its nickname – the “hill of Peace”. 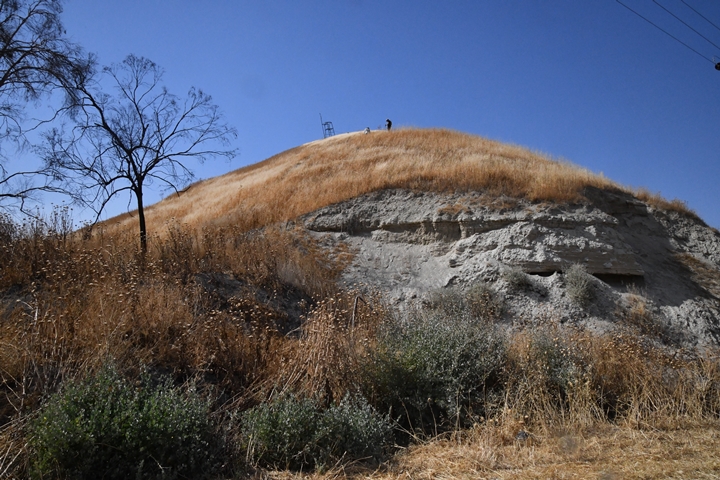 The hill is cut from several sides. We decided to examine one of the cuts from a closer view – here on the south side. 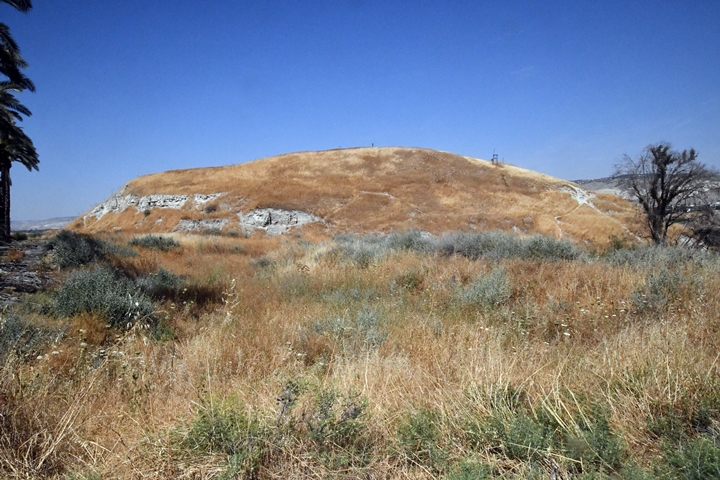 Remains of a wall or the base of a structure is visible on this cut. 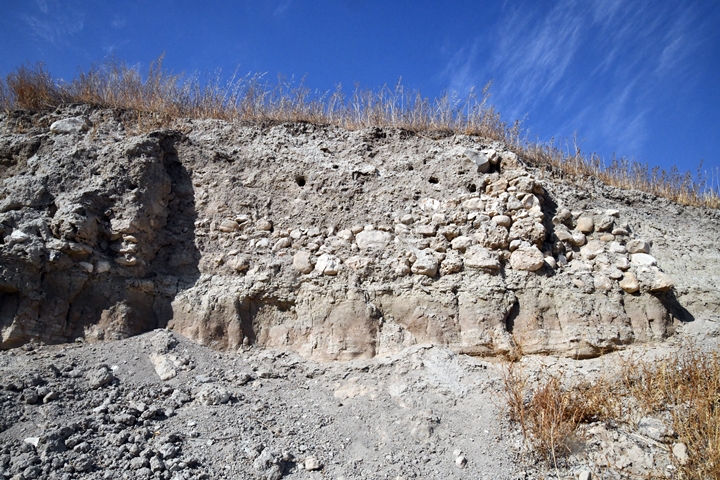 A closer view of the wall is next. 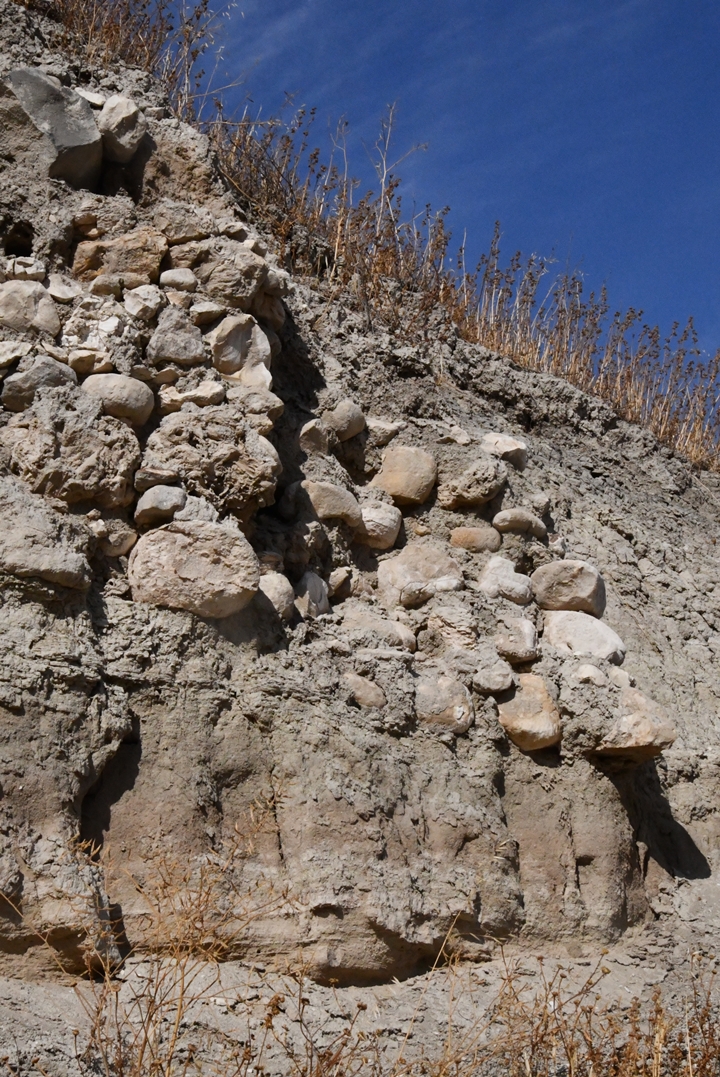 The following are few samples of interesting findings. All items were returned to their original location.

Bronze and Iron age pottery are visible around and on the hill. 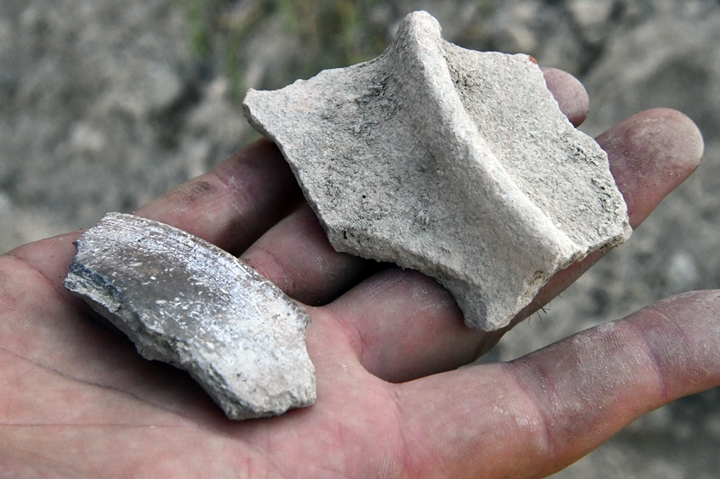 Remains of a Roman jug were also seen on the south side: 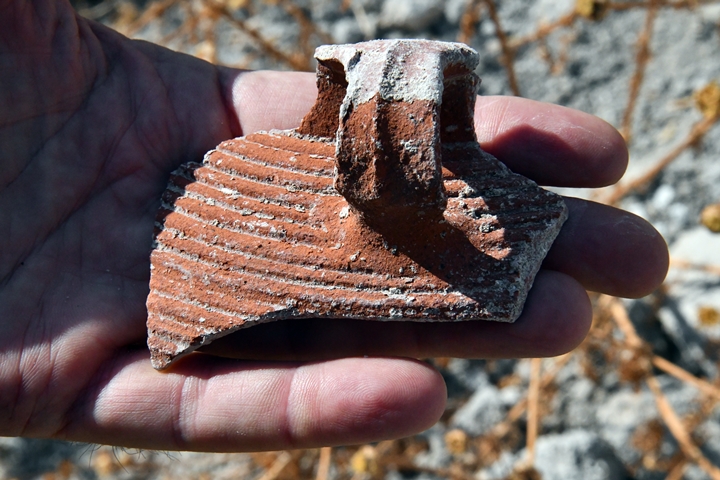 A Mameluke or Crusaders period glazed and colorful  sherd were also found on the east side. 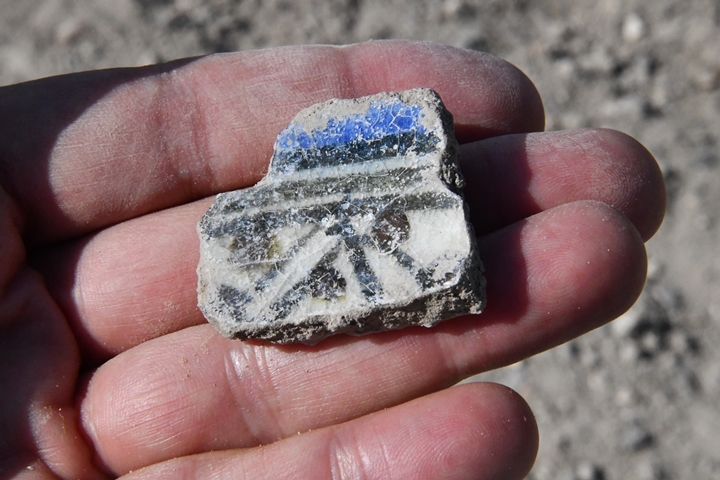 This page was last updated on Aug 6, 2022 (Move section to Kfar Ruppin sites)