Ruins of an Octagon shaped Byzantine church and monastery, located near Mar Elias, on the road to Bethlehem.

Home > Sites > Judea > Kathisma - Church of the Seat of Mary

Ruins of an important Byzantine church and monastery, located near Mar Elias Monastery, on the road to Bethlehem. The church had a unique design - the shape of a triple Octagon.  It was named "The Seat of Mary", recalling Mary's resting on her way to Bethlehem before the birth of her son (Kathisma is "seat" in Greek). The large pillar in the center of the church was according to tradition her resting place.

The site is  located on the side of the ancient road from Jerusalem to Bethlehem, 200M south-west of Kibbutz Ramat-Rachel. Pointing and clicking on selected points in purple will automatically scroll  to the relevant photo or  site. 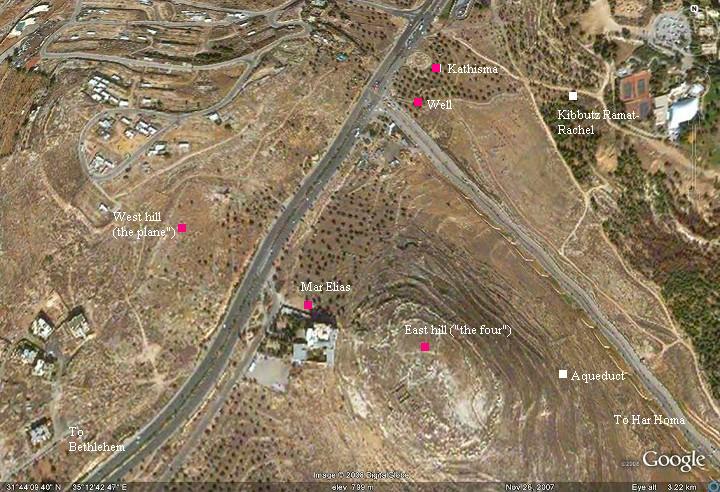 The church and monastery was built in 456AD by a rich widow - Iqilia. It was enlarged at the end of the 6th C, adding a second layer over the inner octagon. It was dedicated to Maria Theotokos (the bearer of God).

After the Arab conquest, the church was converted to a mosque, and a praying corner was added. It was destroyed in the 12th C, probably after the defeat of the Crusaders. Since then its location was forgotten.

For years the existence of this unique church was known from Byzantine literature, but its actually location was a mystery. It was totally buried in the grounds of an olive grove.

In 1927 a Kibbutz, Ramat Rachel, was established near the site. The name means in Hebrew "Rachel's heights", since it is named after prophet Rachel (wife of patriarch Jacob), whose traditional tomb is located nearby.

In the 1950s, during the excavations of the nearby Tell Ramat Rachel, it was assumed that this church was located in those ruins. However, its precise location remained a mystery.

In 1999 the archaeologists  reconstructed the foundations of the church, covered the beautiful mosaic floors, and conducted other preservation works. However, in order to prepare the site for a public opening, a substantial funding is required. A covering cape is planned to be added in the future, so the site will be more visible from the road, and become a major Christian attraction. In the mean time the area is neglected, weed grow up, and Kathisma is still waiting for another waking call to return back to its glory.

On the south side of the church are structures of the Monastery, covering an area of 1.5 Dunams. On its south side is a large well.

The octagon shape of the church can be seen in other early churches and structures, such as St. Peter's house in Capernaum, Mount Gerizim near Nablus (Shechem), and possibly the Dome of the Rock in Jerusalem. According to scholars, the Kathisma was the original design and its unique architectural design was copied to the other structures. It is also larger in size than the other two churches.

A view of the area around the ruins of the church is seen below, with a north-east view. On the far right background is a  hill where Kibbutz Ramat Rachel is located. 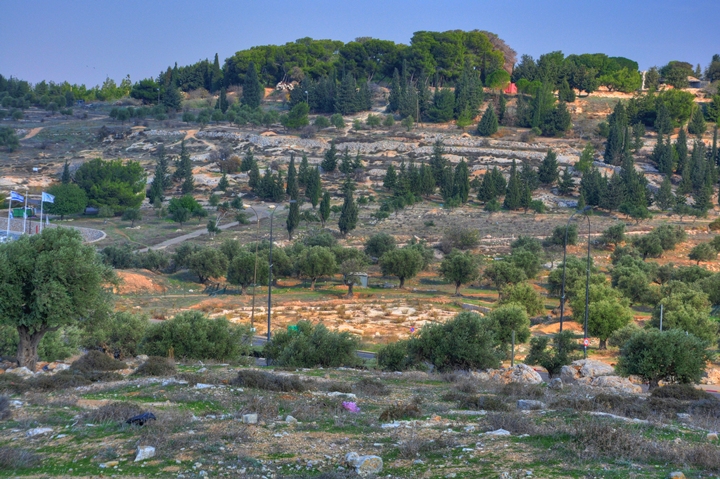 The next photo is a closer view of the excavated area, focusing on the center of the octagon church. 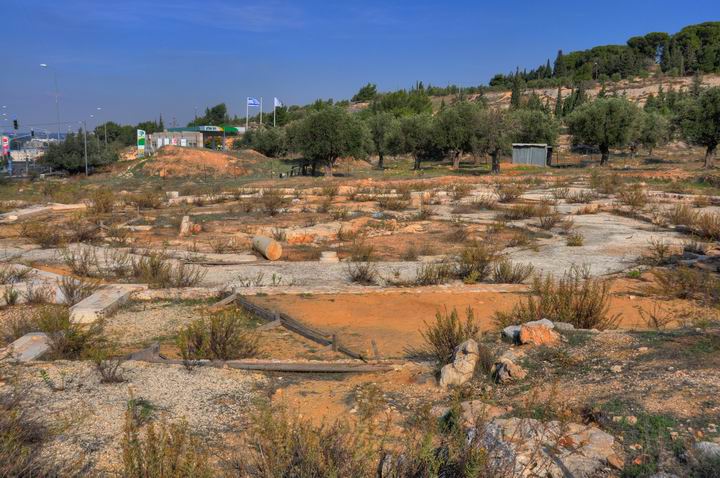 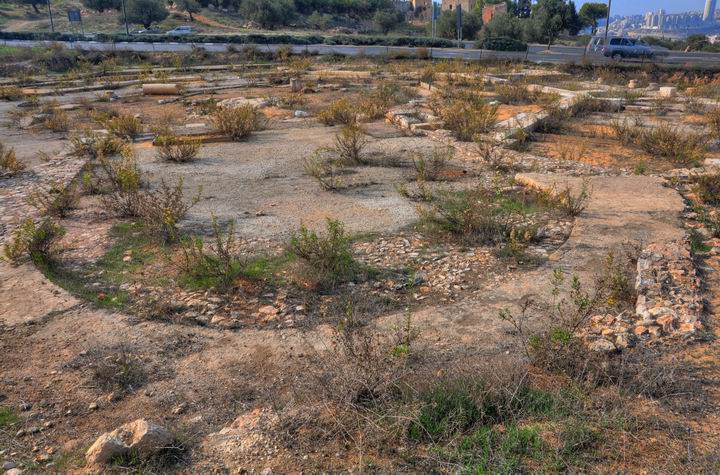 The photo below shows another view of the main nave, as seen from the north-west corner. 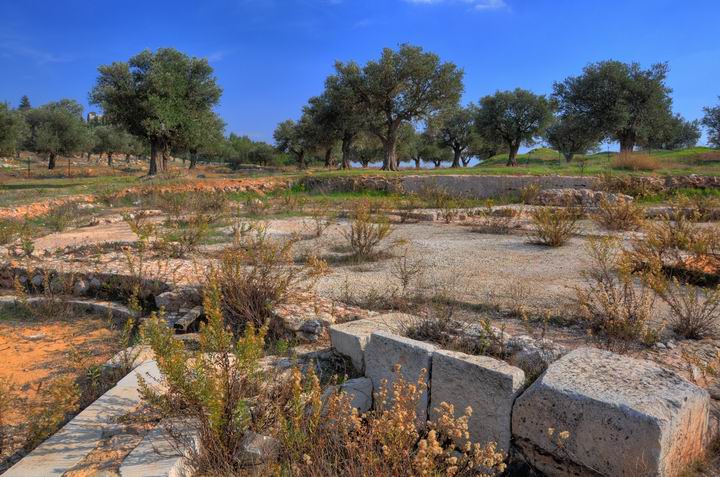 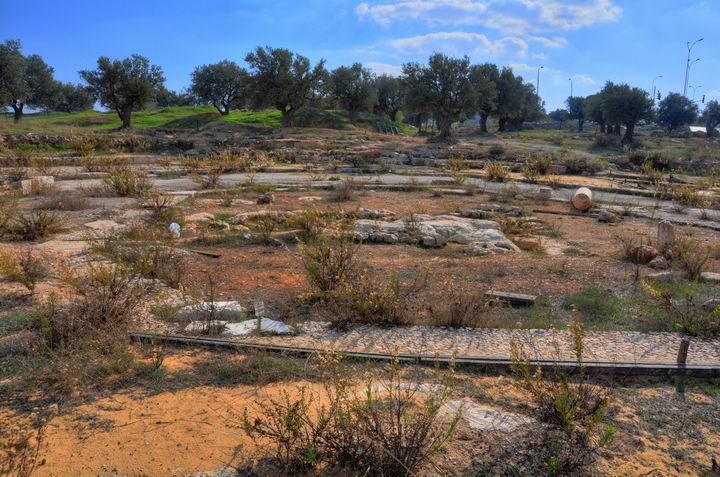 A view from the center towards the main nave is seen below, with another view of the rock. 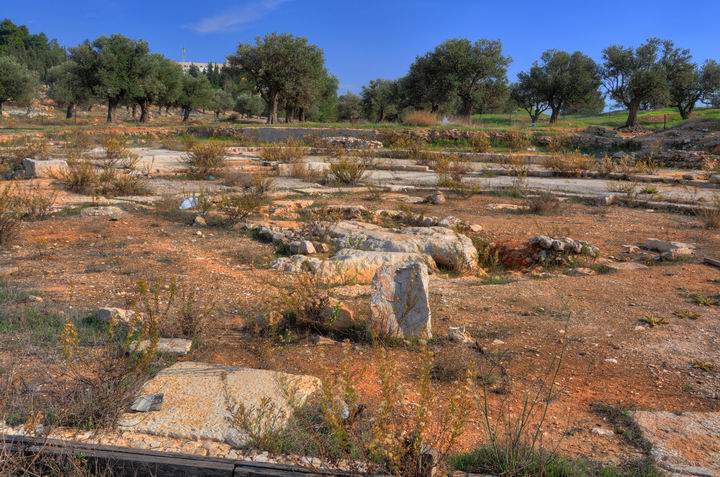 A view from another angle is seen below, with fragments of a column. 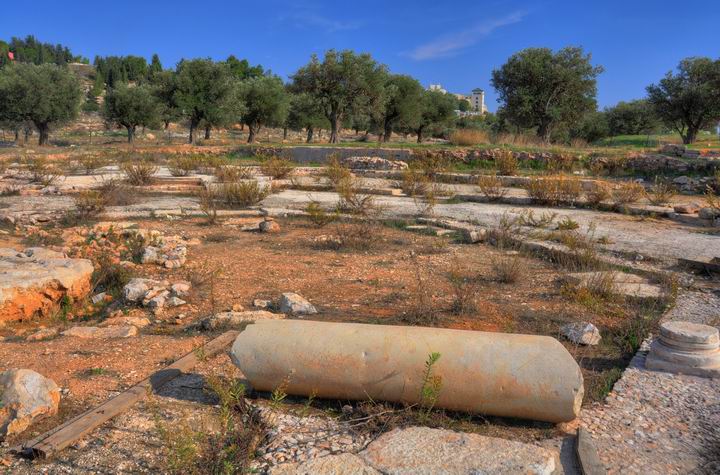 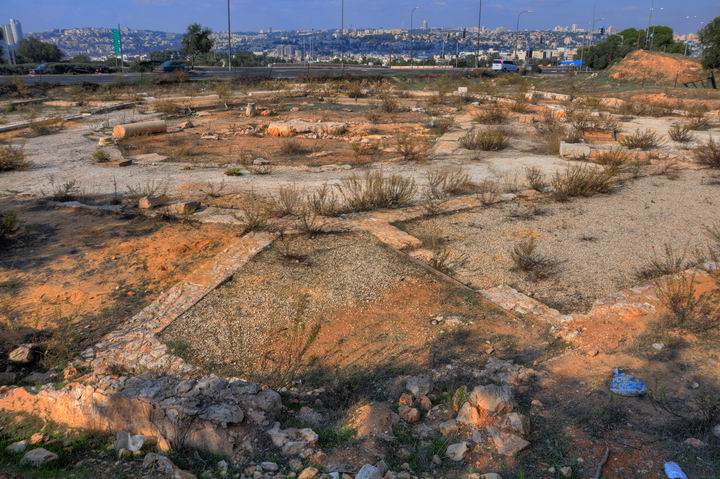 A section on the southern side, with a cutting into the bedrock, is seen below. A prayer niche - Mihrab - was installed on the south wall, dated to the early Arab period. During this time the church may have coexisted with the mosque. 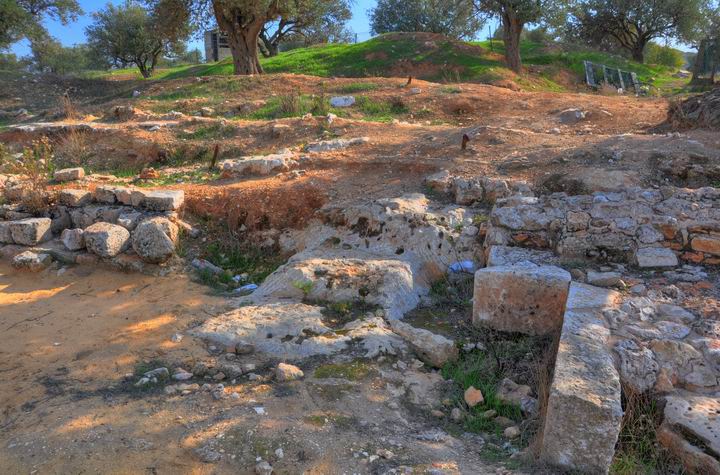 A decorated column is seen in the photo below. 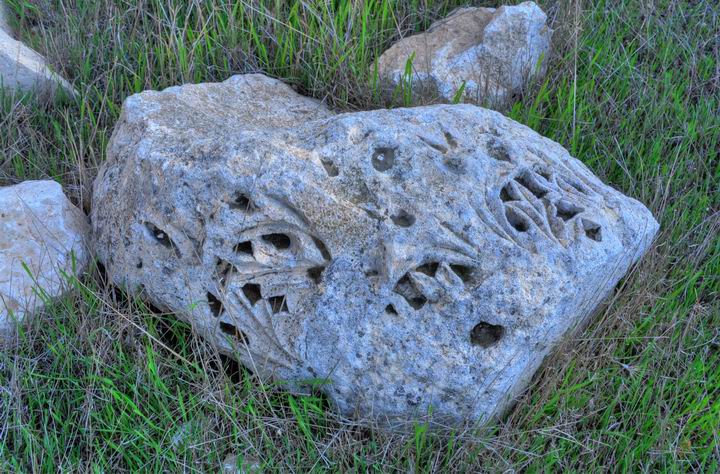 On the southern side of the church are excavated ruins of the monastery. A stone slab pavement was found here, as seen below.

From the salvage excavations report the archaeologist (R. Avner): " 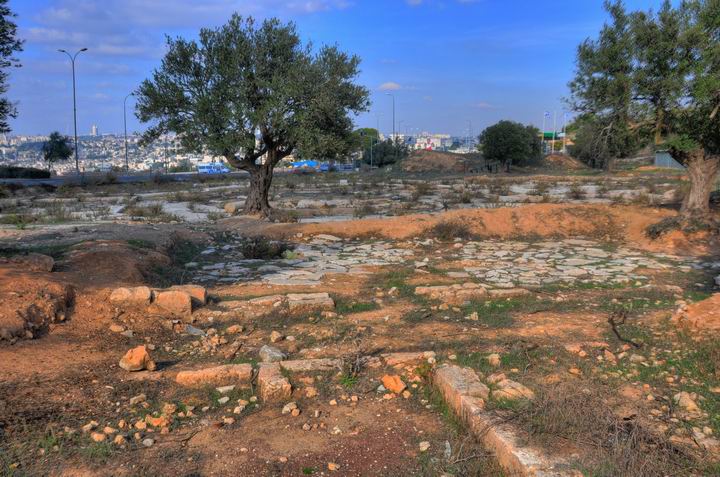 A closer view of the paved floor is seen below. 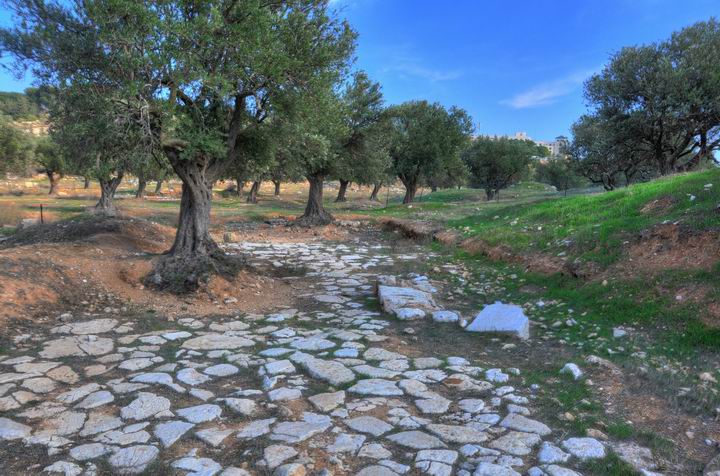 On the north-east side of the excavations stands one of the olive trees, with a partial digging around it, probably in the process of removing the tree to another location. 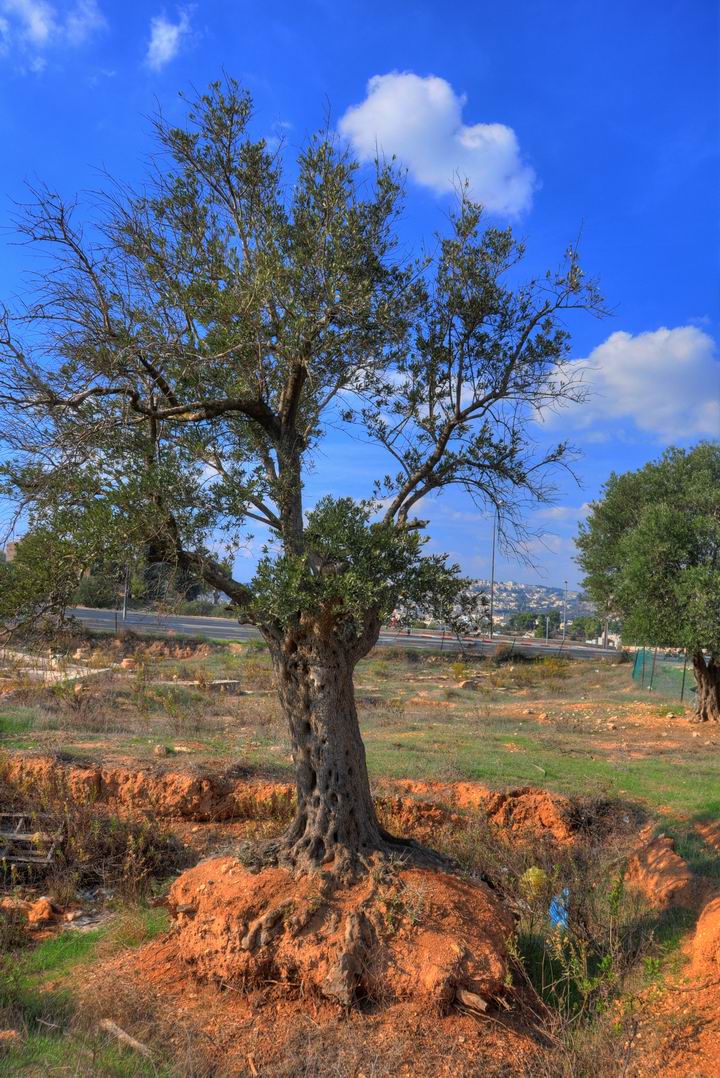 Kathisma well (Arabic: Bir Kadismu", or Qadismu) is the name of a pool adjacent to the Kathisma church. This open walled hole is located between the monastery and the modern road that connects to the Har-Homa neighborhood. The tradition holds that Mary stopped here to drink from the well on the way to Bethlehem, and therefore it is a sacred place. 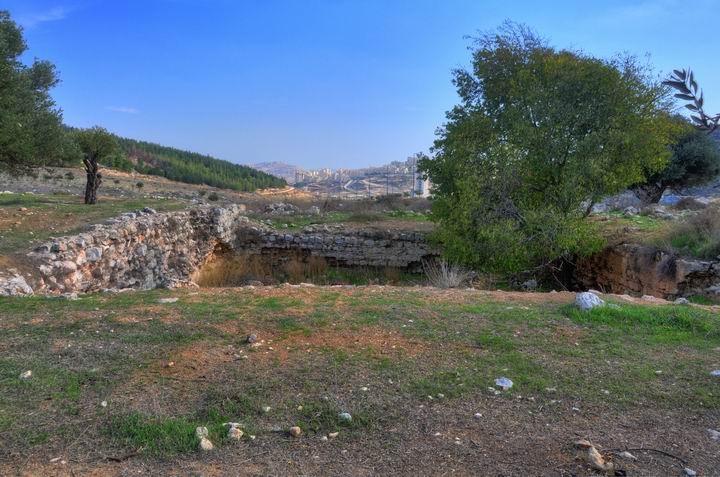 According to tradition, the wise men witnessed the star when they camped by the well on the way to Bethlehem. (Matthew 2 1-9): "Now when Jesus was born in Bethlehem of Judaea in the days of Herod the king, behold, there came wise men from the east to Jerusalem,  Saying, Where is he that is born King of the Jews? for we have seen his star in the east, and are come to worship him.... And he sent them to Bethlehem...". Therefore, the well is also named "the well of the star". 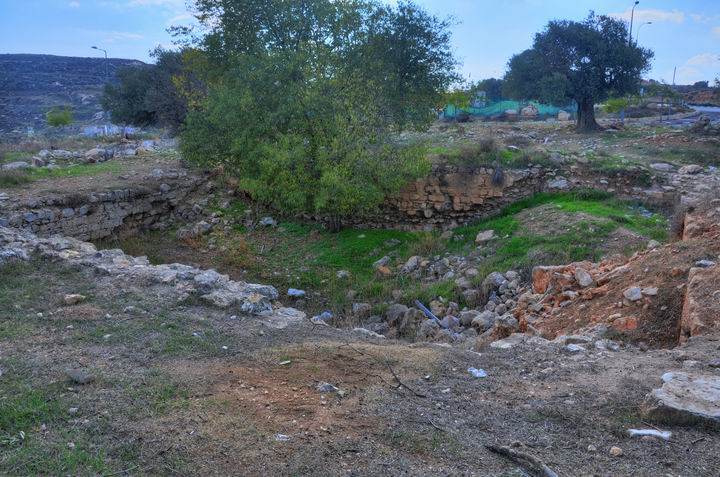 The well was excavated in salvage excavations in 2000, and a square opened on its northern side  dated the reservoir to the Byzantine period.

In the verses that tell the story of the travel of Joseph and Mary to Bethlehem, there is a description of shepherds in the field (Luke 2 8): "And there were in the same country shepherds abiding in the field, keeping watch over their flock by night". The following photo shows a scene with a herd of goats and sheep between the olive trees in the grove south of Kathisma.

The buildings of Kibbutz Ramat Rachel are seen in the far background. 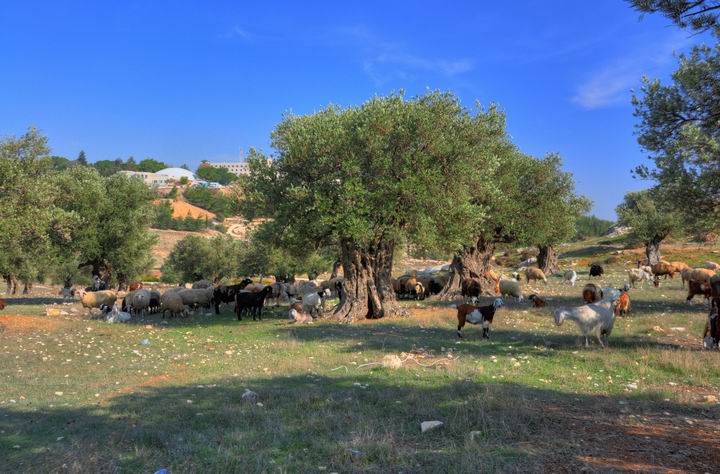 According to tradition, Mary stopped and rested on the rock in Kathisma while riding on the way to Bethlehem, just before birth:

"And Joseph also went up from Galilee, out of the city of Nazareth, into Judaea, unto the city of David, which is called Bethlehem; (because he was of the house and lineage of David:) To be taxed with Mary his espoused wife, being great with child".

According to tradition, the wise men witnessed the star when they camped by the well on the way to Bethlehem.

"Now when Jesus was born in Bethlehem of Judaea in the days of Herod the king, behold, there came wise men from the east to Jerusalem,  Saying, Where is he that is born King of the Jews? for we have seen his star in the east, and are come to worship him.  When Herod the king had heard these things, he was troubled, and all Jerusalem with him.  And when he had gathered all the chief priests and scribes of the people together, he demanded of them where Christ  should be born.  And they said unto him, In Bethlehem of Judaea: for thus it is written by the prophet,  And thou Bethlehem, in the land of Juda, art not the least among the princes of Juda: for out of thee shall come a Governor, that shall rule my people Israel.  Then Herod, when he had privily called the wise men, enquired of them diligently what time the star appeared. And he sent them to Bethlehem, and said, Go and search diligently for the young child; and when ye have found him, bring me word again, that I may come and worship him also.  When they had heard the king, they departed; and, lo, the star, which they saw in the east, went before them, till it came and stood over where the young child was".

This text tells the story of the travel of Mary and Joseph to Bethlehem. In the middle of the road Mary requests to rest and  descends the ass. The Greek Orthodox accepts this book as a tradition, and the Kathisma church is located according to tradition at the place of rest