A church at the traditional place of the tomb of the virgin  Mary. The church is cut into the rock and has a form of a cross, with a wide staircase leading down into the church and tomb. The structure is mostly from the Crusaders period.

A church at the traditional place of the tomb of the virgin  Mary, mother of Jesus. The church is cut into the rock and has a form of a cross, with a wide staircase leading down into the church and tomb.

According to tradition, Mary ascended into heaven. The tomb became the shrine for the assumption into heaven, hence the name of the church.

The Church is located in an underground rock-cut cave in the valley of Jehoshaphat, on the foothills of Mount of Olives.  It is the first monument that is seen on the left side after crossing the bridge over the Kidron brook, just before the basilica of Agony (Gethsemane).

An aerial view is seen below showing the location of the tomb and other points of interest. The burial caves were cut into the rock in the 1st century AD.  They were later expanded into a cross-shaped church with the tomb in its center. In the 6th century AD an octagon shaped church was built on the upper level, covering the tomb. It was destroyed in the Persian invasion (614).

During the Crusaders period a large church was built on the upper level, and a monastery was also added – the Abbey of St. Mary of the Valley of Jehoshaphat, which was protected by a wall. The staircase and entrance were also part of the Crusaders church. It was destroyed by Saladin (1187) and all what was left was the south entrance and staircase. The lower church was subjected to flooding, since it is adjacent to the Kidron brook. After the floods of 1972 the area was cleaned, and at that time there were archaeological excavations conducted here to determine the age of the complex.

Today there are frequent visits by Christian pilgrims and other tourists.  The highlight of the religious events is August 15, the feast of Assumption.

The Church is located in an underground rock-cut cave, on the east bank of the Kidron brook, close to the Lions’ gate. The southern front of the church, seen in the photo below, is from the Crusaders period (built at about 1130). In the background are the slopes of Mount of Olives. 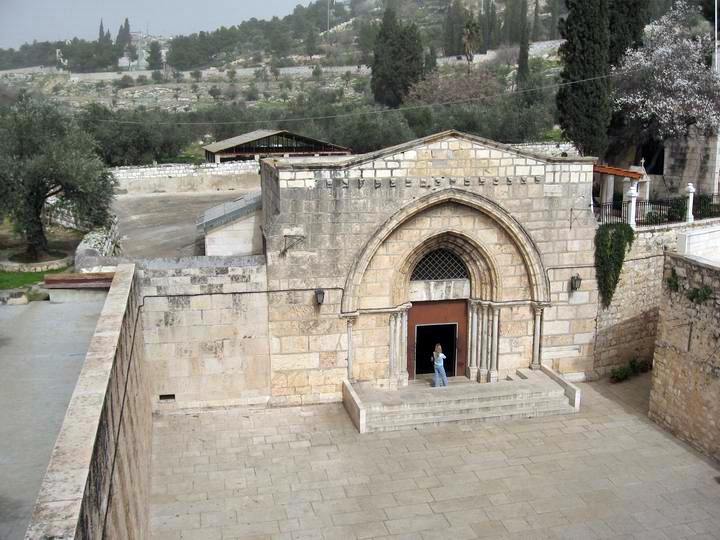 A view of the modern upper level. 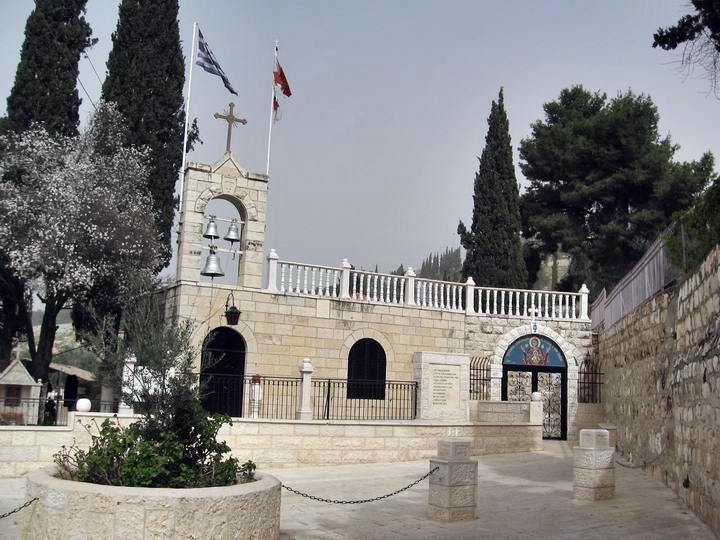 The steps take you way down into the lower church, through the Crusaders-era wide staircase . On the way down there are 2 chapels on both sides, as seen in the following photo. Their names are based on a tradition from the 14th century: On the left (west) side is the chapel of Joseph, Mary’s husband; on the right side is a chapel of Mary’s parents – Hanna (Anna) and Joachim. 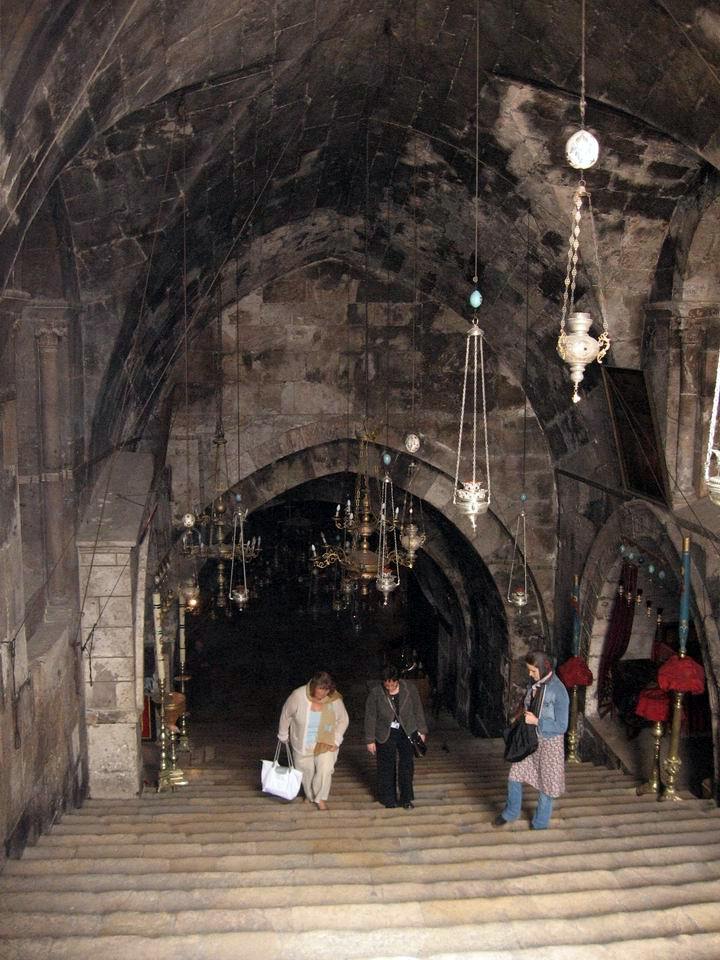 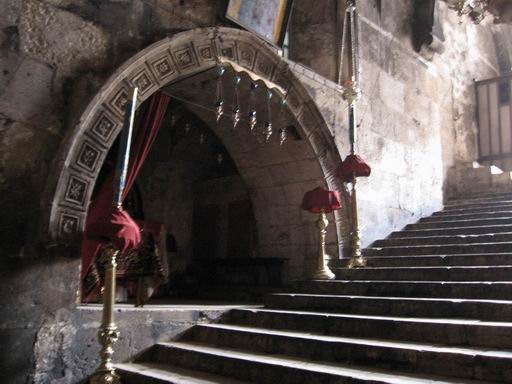 This is the view of the western side of the cross shaped underground church. There is an altar and a water cistern. 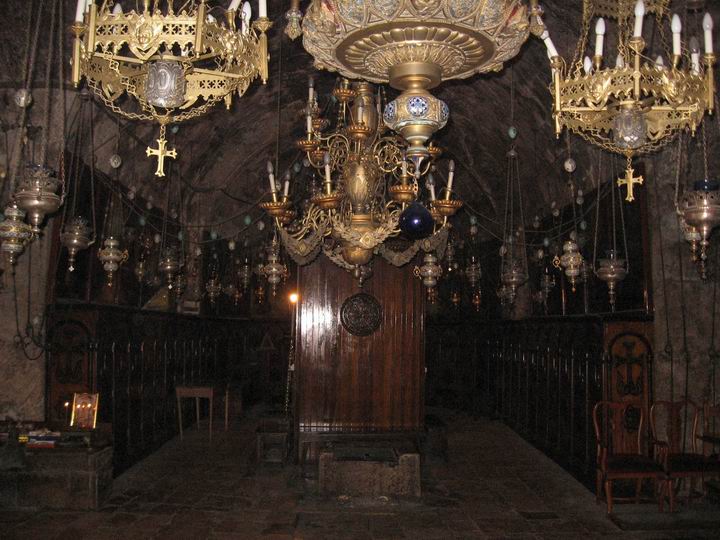 A view of the end of the western side with a Copt altar. 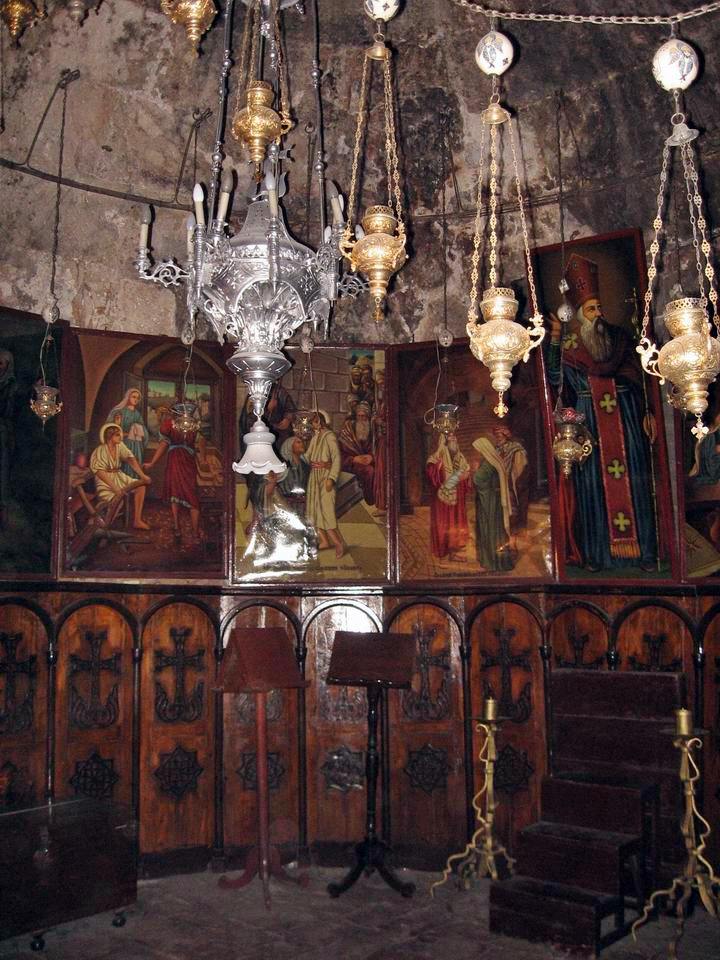 The eastern side of the church is longer, 18M long. This is where Mary’s tomb – in the center of the hall. It ends with a round apse, with some Greek-orthodox altars – one of them is seen below. 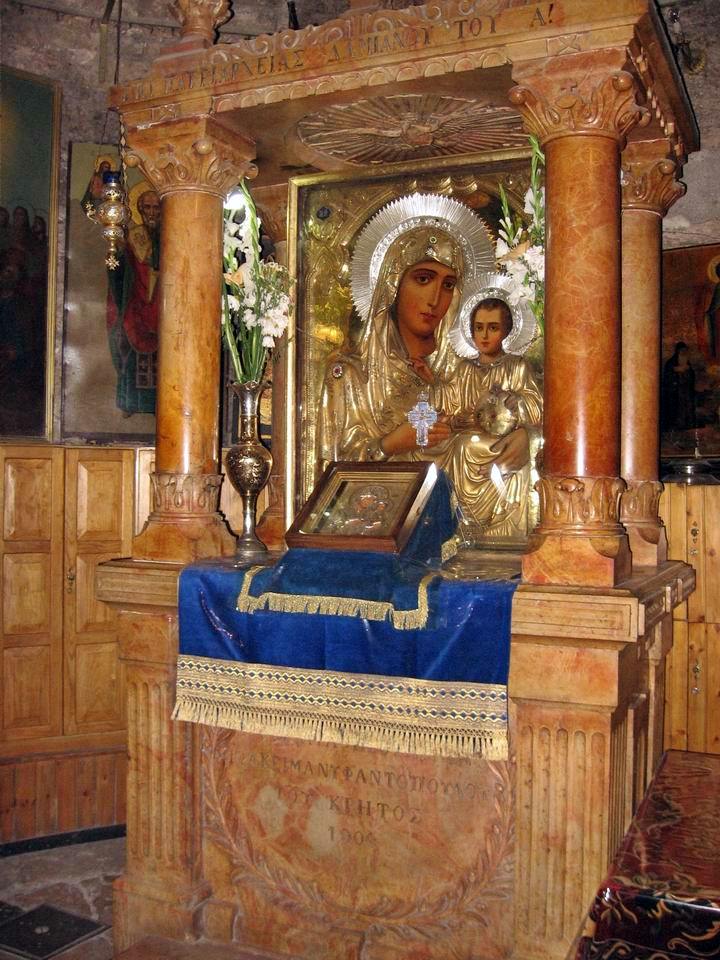 Another view of the east side. 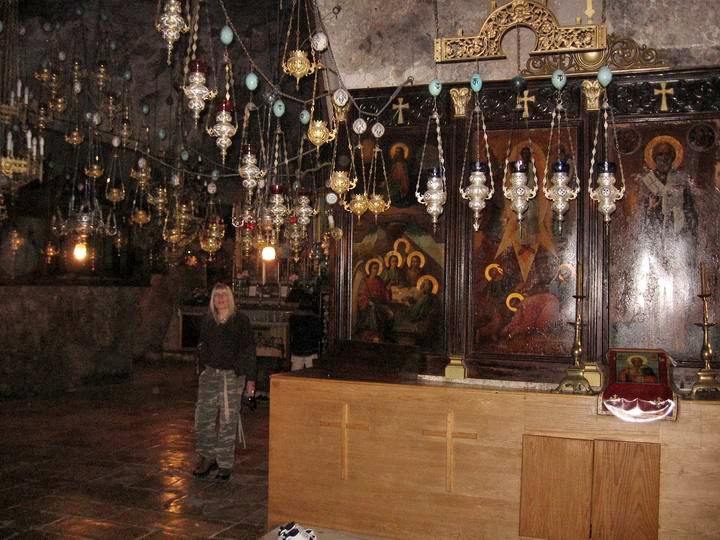 This is the photo of the entrance to the chapel of  the tomb of Mary, located on the eastern hall. The chapel can be entered from two narrow openings on two sides – the west (seen below) and the north (hidden on the left side). 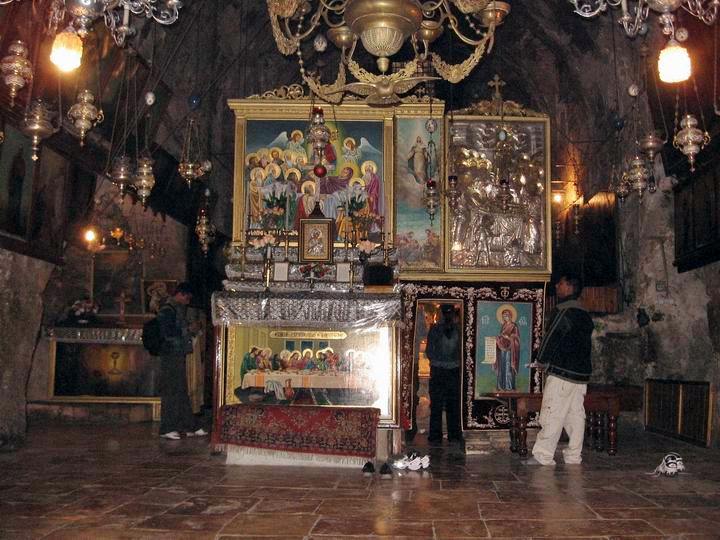 This is the inner west side doorway to Mary’s tomb. 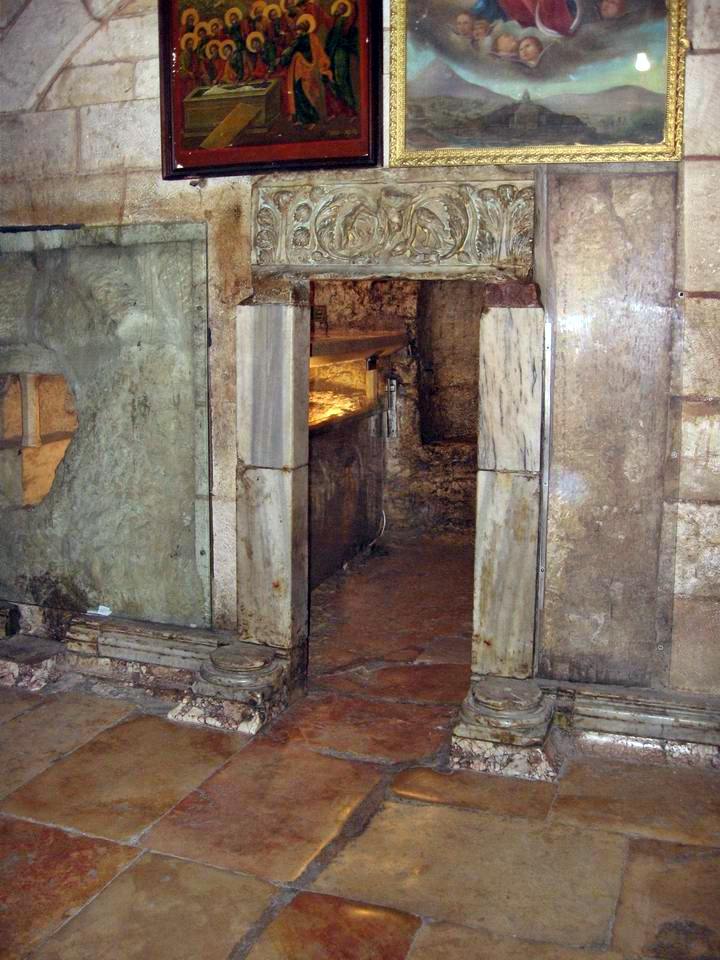 The tomb is an empty stone bench. On the side facing the western entrance are three holes that were cut into the stone and allow the visitors to touch the inside of the tomb. 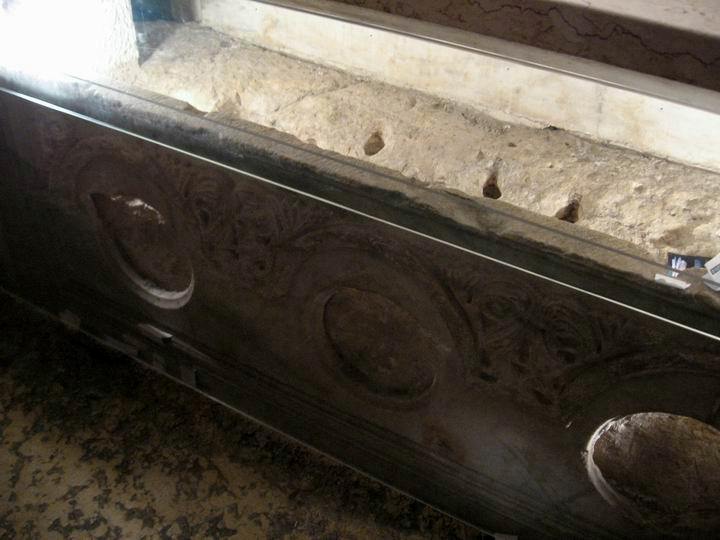 The following photo shows the objects above the tomb. 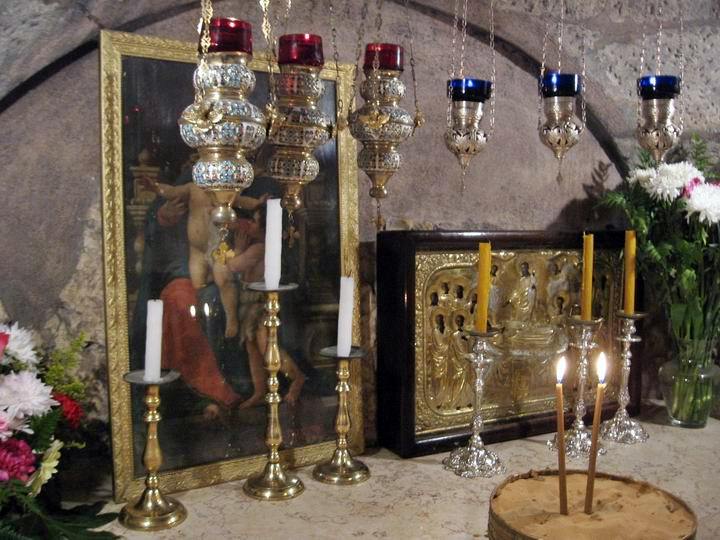 Pilgrims and residents come here to light up a torch and pray to the virgin Mary. This photo is taken from the north side opening. 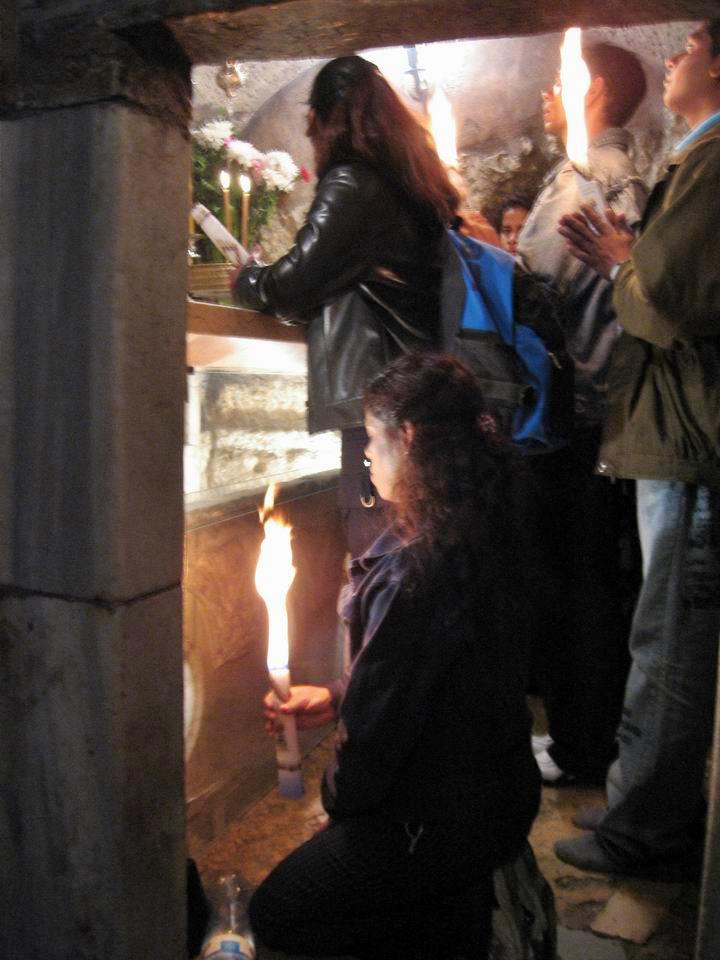 South to the exterior court of Mary’s tomb, and adjacent to the bridge over the valley, is the tomb of a 15th C Jerusalem Judge – Mujir e-Din – as seen in the photo below. He was the author of a book on Jerusalem and Hebron, published in 1495. 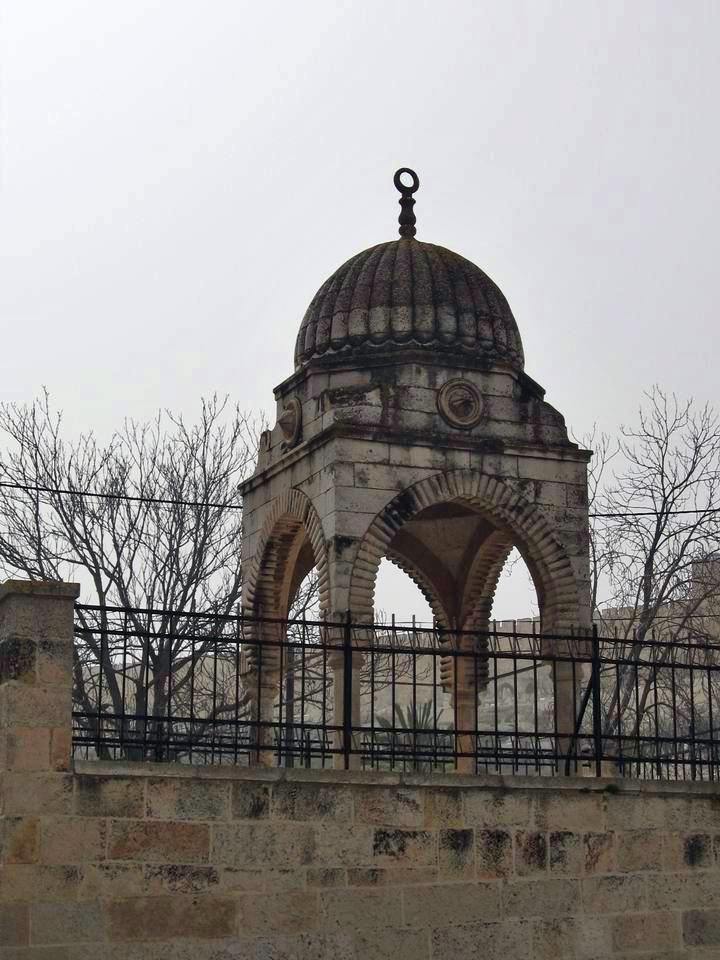