Beit-Jamal is a Monastery, located south of Beth-Shemesh. It is named after Gamaliel the Elder, and is the place of his burial and of St. Stephen - the first Christian martyr.

Beit-Jamal is a Monastery, located south of Beth-Shemesh. One of its churches is built over the ruins of a Byzantine church, where the tombs of St. Stephen, Rabbi Gamaliel the Elder and others were discovered during the Byzantine period.  The church, St. Stephen's,  is named after the first Christian martyr who was stoned to death in Jerusalem in 34-35AD (Acts 6-7) and was buried in the village of Kefar Gamala.

The monastery of Beit Jamal is located on a secluded hill,  south of the city of Beth Shemesh. To reach the site, follow the signs from road #38. 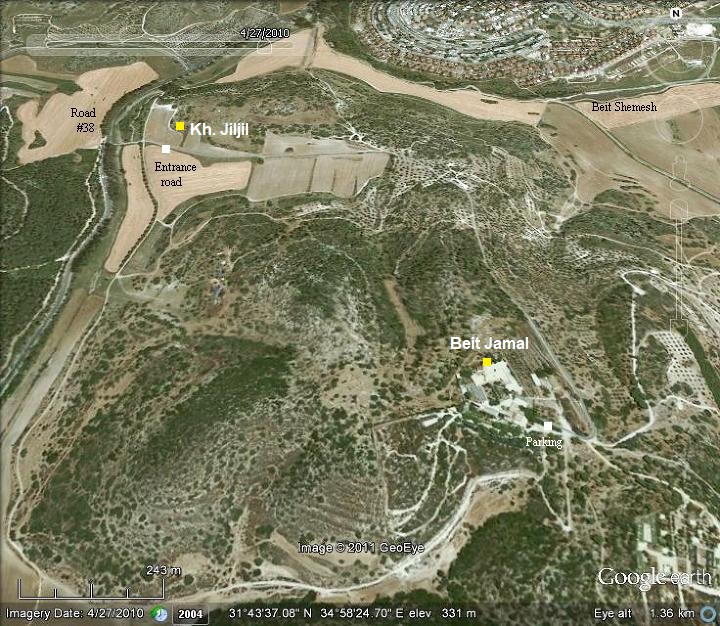 According to Christian tradition, this was the site of the Roman village of Kefar Gamala - the village named after  Rabbi Gamaliel the Elder who lived here. Rabban (Rabbi) Gamaliel was the president of the Great Sanhedrin in Jerusalem, a leading Pharisee scholar, and the grandson of the famous Hillel the Elder. Pharisees are noted for their scholarship and fairness, and follow the Biblical golden rule (Leviticus 19 18): "thou shalt love thy neighbor as thyself". Rabbi Gamaliel (? - ~50 AD) was a moderate person and favored the early Christians.

The Acts of Apostles tell us that Gamaliel was also the teacher of Paul the Apostle (Saul of Tarsus, 5 BC-67 AD) - one of the most influential early Christian missionaries.  (Acts 22 3): "I am verily a man which am a Jew, born in Tarsus, a city in Cilicia, yet brought up in this city at the feet of Gamaliel...".

In 415 AD the Greek priest Lucian discovered the tombs of the Martyr Stephen (who was stoned to death), Rabbi Gamaliel, his nephew Nicodemus  and his son Abibos. Lucian wrote that Gamaliel, St. Paul's teacher, appeared to him in his dreams and pointed to the location of his tomb in Beit Jamal. Their remains were transferred to Mount Zion Abbey (Dormition) in Jerusalem.

In the 5th-6th  Century  AD a church was established on the site of the tombs. Some of its remains can be seen in the back of the Ottoman period monastery. The Byzantine church, St. Stephen,  was named after the first Christian martyr. His name was written on a 5th-6th  Century  Greek inscription which was found (mostly damaged) on its floor.

The Byzantine church was destroyed during the Arab invasion (614AD), as most of the churches in the Holy Land.

A new monastery was constructed in 1881 in the village of Beit Jamal ("the house of beauty"), near the location of the ruins of the earlier church.  It served as an agriculture school for the poor and orphan children.

In 1916 the Salesian monks found the remains of a mosaic floor, which was part of the ruined Byzantine church. They associated the findings with the report by Lucian, and found the tombs inside the crypt.

In 1930 a small church was built on the ruins of the Byzantine church. It was designed by the Swiss architect Maurizio Gisler, a Benedict monk from the Mount Zion Abbey (Dormition) in Jerusalem.

In the premises of Beit Jamal are two monasteries (one for men, one for women), and two churches (Sisters of Bethlehem church, and St. Stephen's church). The place is open to the public, offering weekend concerts, a shop where you can purchase locally made wine or olive oil,  a video presentation of the life of nuns, and a visit to St. Stephen's church where you can also hear the story of the place from the friendly Salesian monk.

Upon driving along the access road to the site, the main building of the monastery is seen towering above the hill. 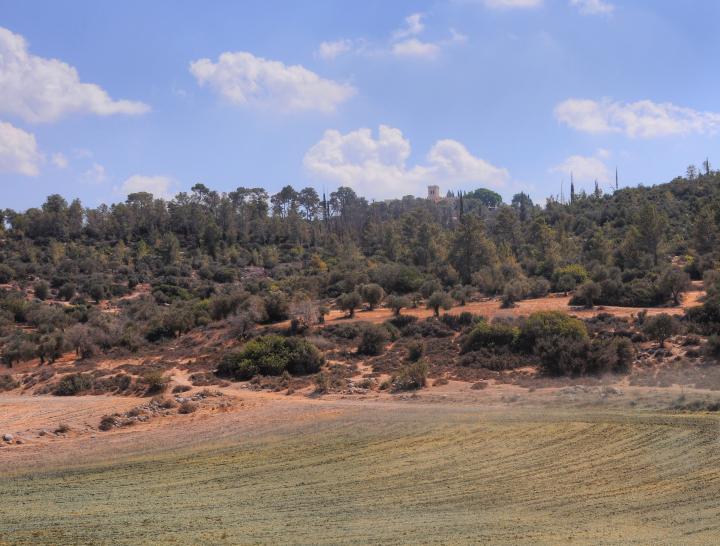 A closer look on the tower of the monastery, which was constructed in 1881. 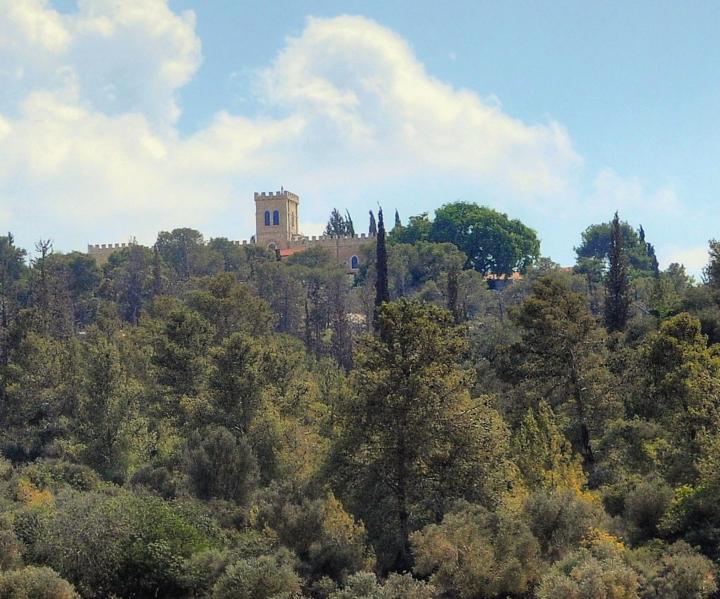 The gate to the monastery faces the south-east. On the gate is the sign "BEIT GEMAL". A shop is located behind the gate, and sells wine and olive oil. 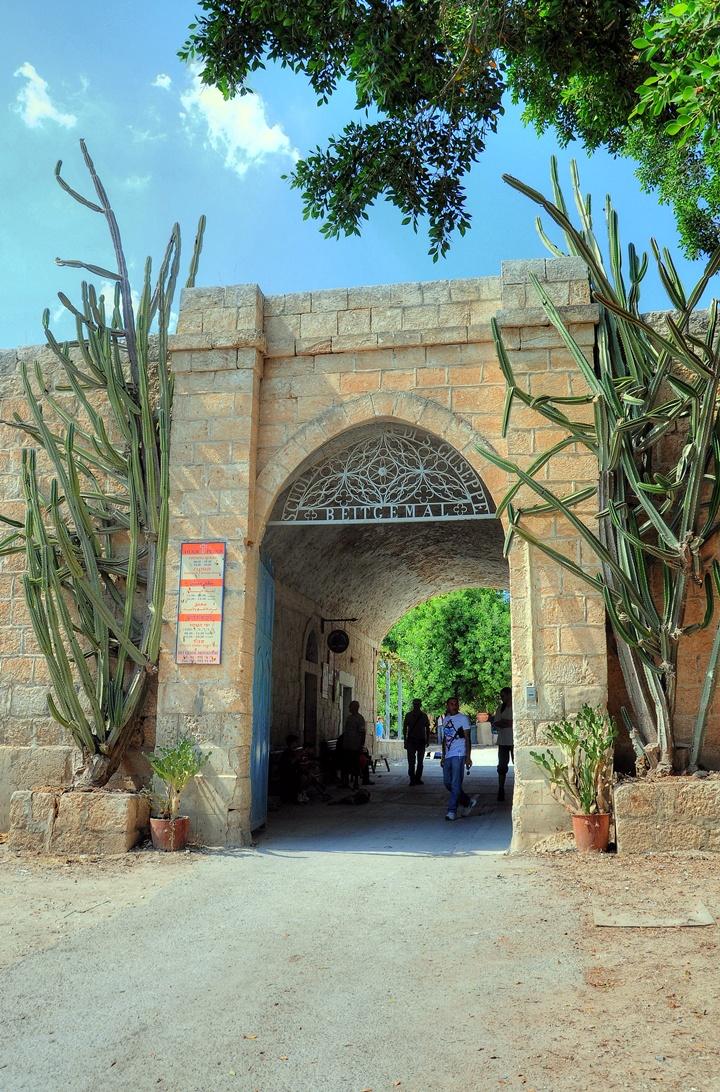 Walking past the gate is an open court yard, and a path to the main structure. 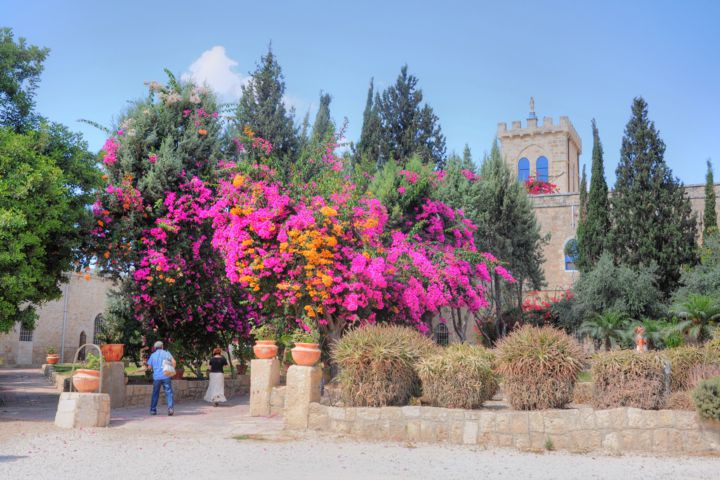 Another view of the garden on the north side of the gate is shown in the next picture. The path on the left goes around the monastery to the rear lot, where St. Stephen's church is located. 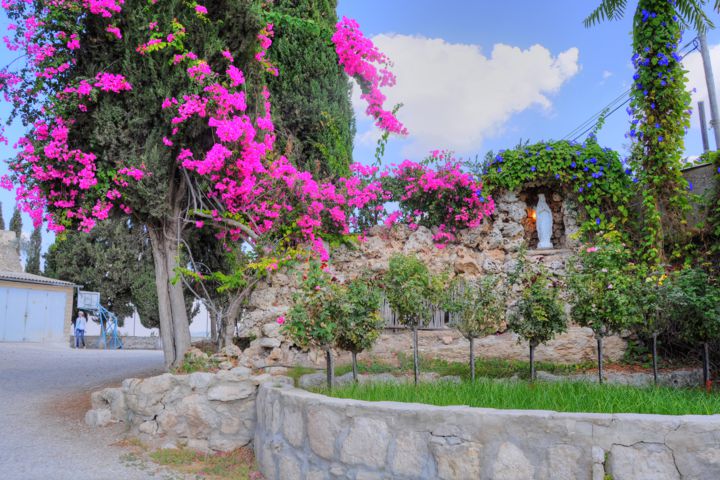 A view of the tower-like structure on the north side is shown in this picture. 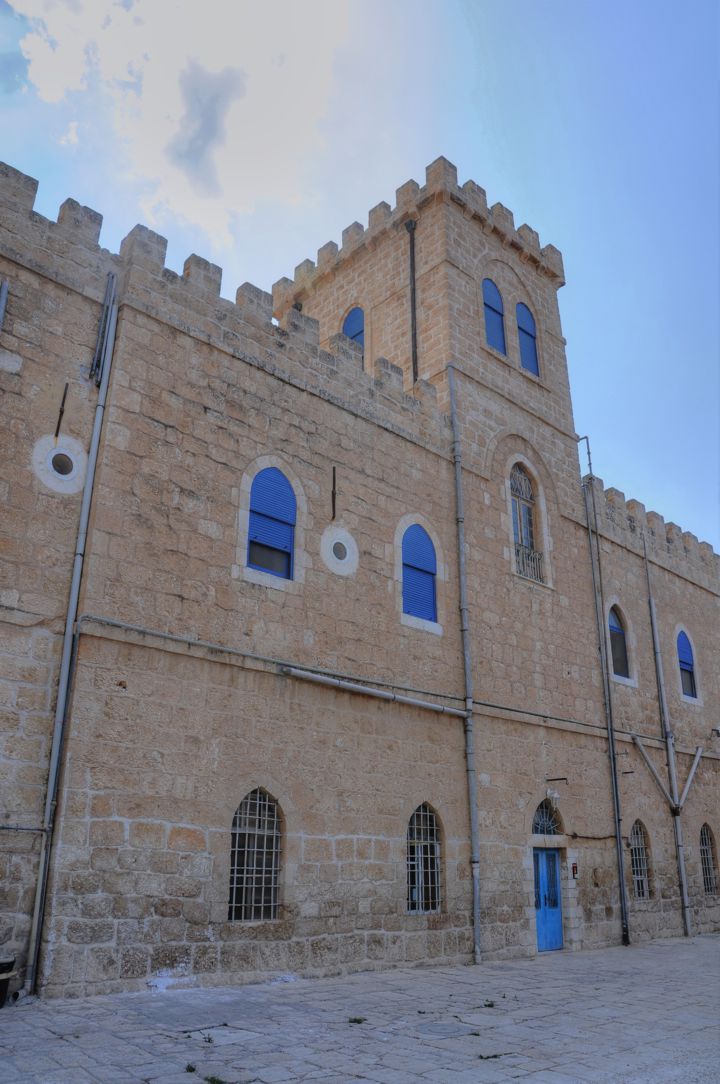 St. Stephen Church is located on the north side of the monastery. It was built in 1930 over the ruins of the Byzantine church, using the same architectural style and size of the ancient church. 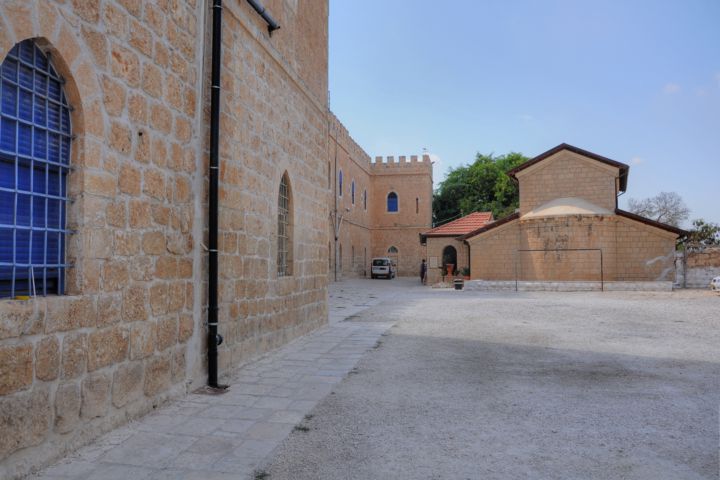 On the exterior wall of the church are segments of the mosaic floor and carved stone fragments belonging to the 5th-6th  Century  Byzantine church. These were found in excavations of 1916.

A lintel, its edge is seen on the left side, has an engraved inscription with the words "DIAKONIKON STEPHANOU PROTOMARTYROS.", meaning the archive of the relics of St. Stephen. This stone was found in excavations and historical study of the site and area (1989-1999) by the Italian Andrej Struss, at a site 800m northwest of the monastery. According to the excavators,  the place was initially a martyrium and later converted to a winepress. 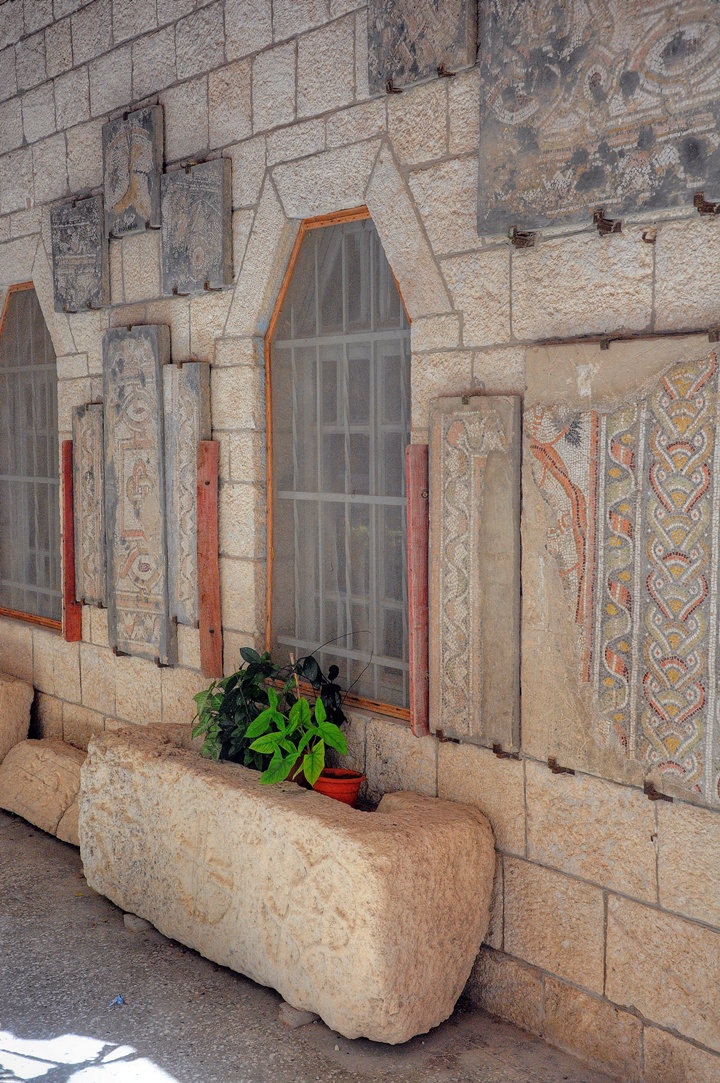 Other Byzantine segments are seen on the other side of the entrance: 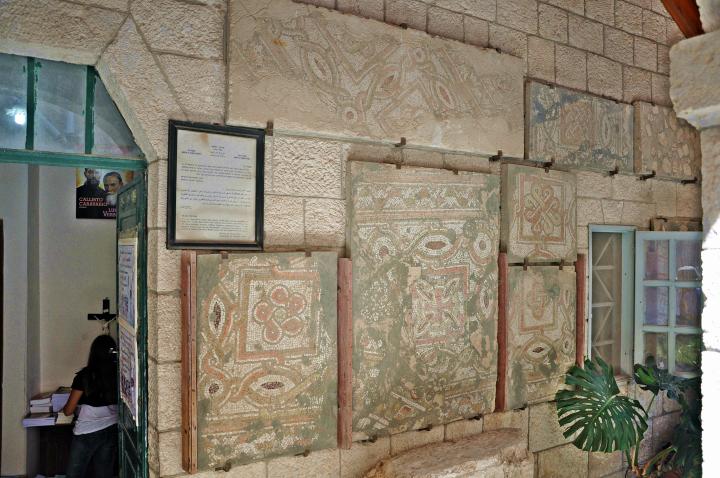 A view of the interior is seen in the following picture, with its rich colorful paintings. The altar is facing the east as in all churches. 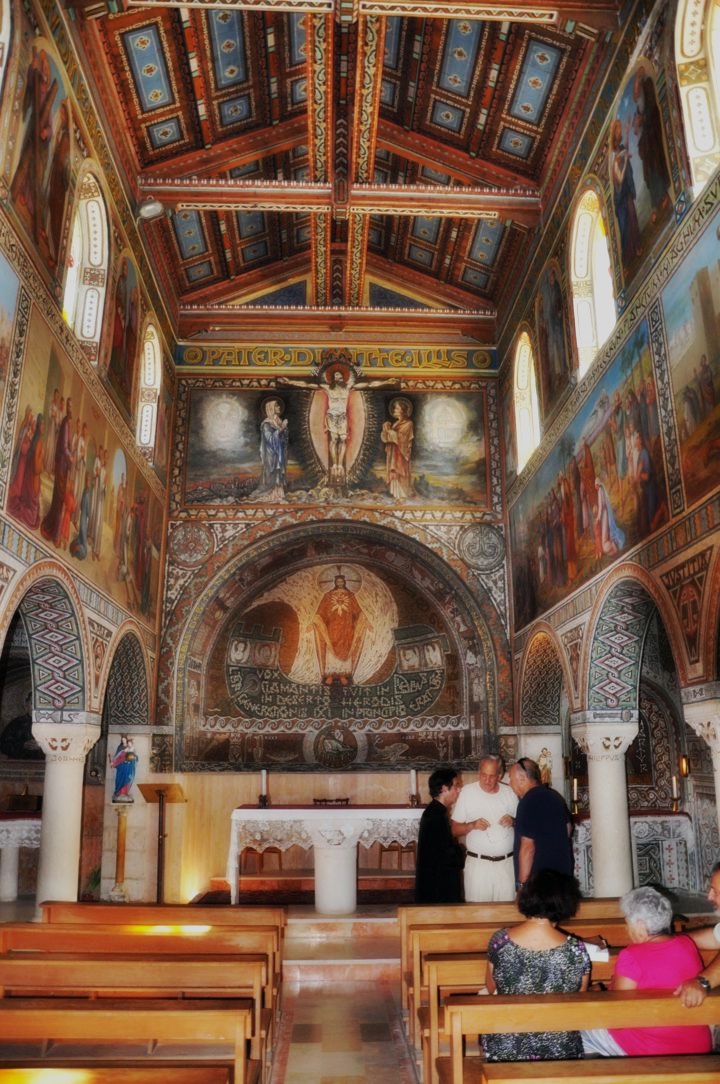 On all walls are paintings of events that are related to the life and martyrdom of St. Stephen.

In the following painting, located on the northwest side, is the trial of St. Stephen in the council, seen in the center with the red robe. (Acts 6 11-15): "Then they suborned men, which said, We have heard him speak blasphemous words against Moses, and against God. And they stirred up the people, and the elders, and the scribes, and came upon him, and caught him, and brought him to the council, And set up false witnesses, which said, This man ceaseth not to speak blasphemous words against this holy place, and the law: For we have heard him say, that this Jesus of Nazareth shall destroy this place, and shall change the customs which Moses delivered us. And all that sat in the council, looking stedfastly on him, saw his face as it had been the face of an angel". 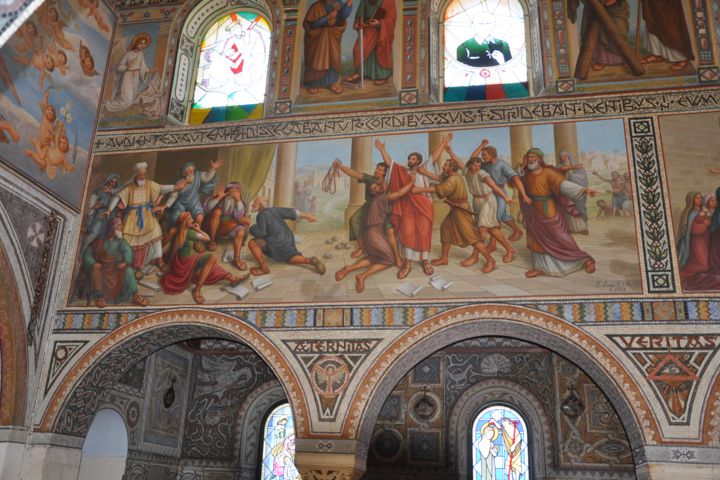 Another wall painting on the northeast side, with Stephen kneeling: 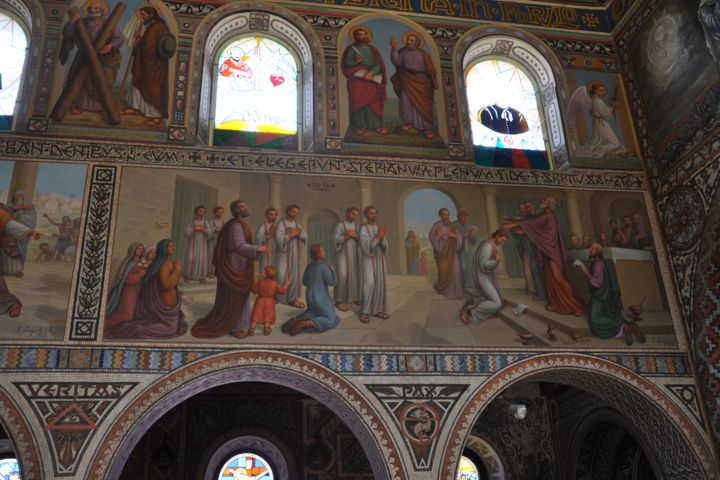 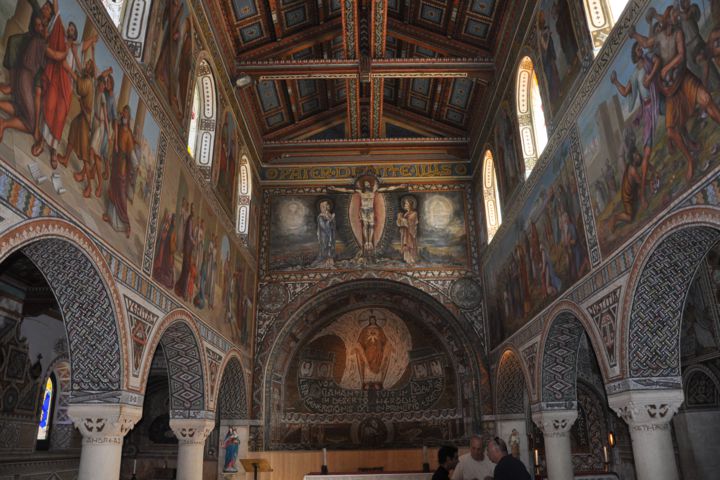 The wall on the south side is shown in the following picture: 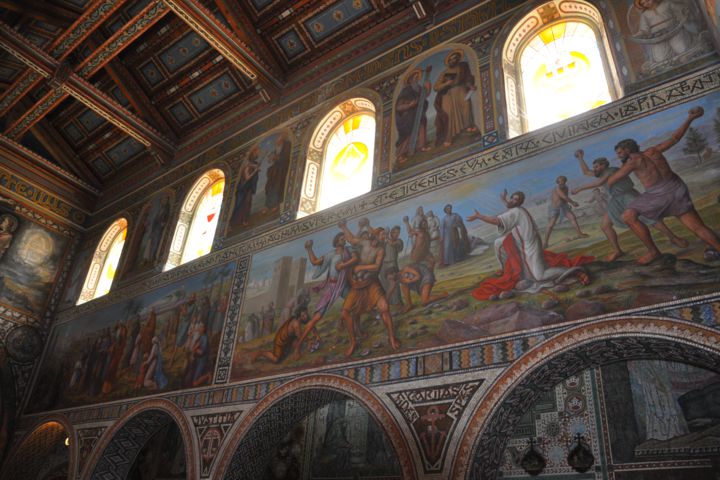 On the southwest side is the painting of the stoning of Stephen. (Acts 6 58): "And cast him out of the city, and stoned him..."..  Note the halo around the head of St. Stephen.

In the background: Paul (Saul of Tarsus) stands on the left, witnessing the stoning. (Acts 7, 58): "and the witnesses laid down their clothes at a young man's feet, whose name was Saul" 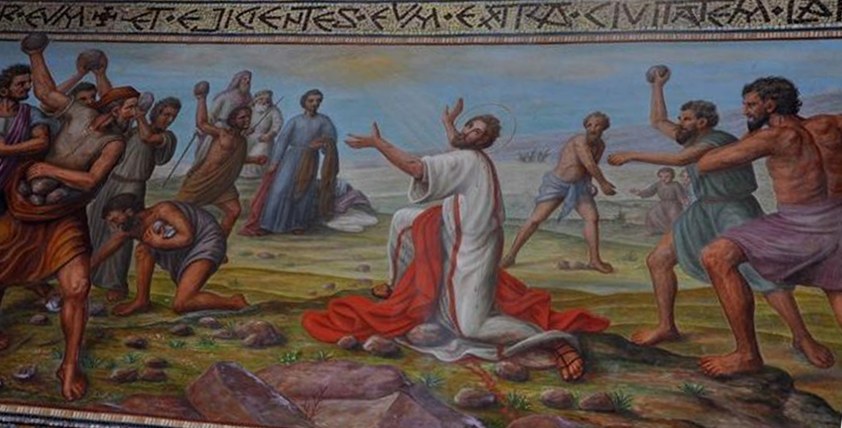 The south lateral niche is shown below with the painting of the Stephen. In Greek the words are "Proto-Martyr" (protos: first).

The entrance to the crypt (the level under the church) is thru the lower right side. Under the marble floor on this side were the locations of the Roman-period 1st  Century  AD tombs of Stephen, Gamaliel, Nicomedus and Abibos. 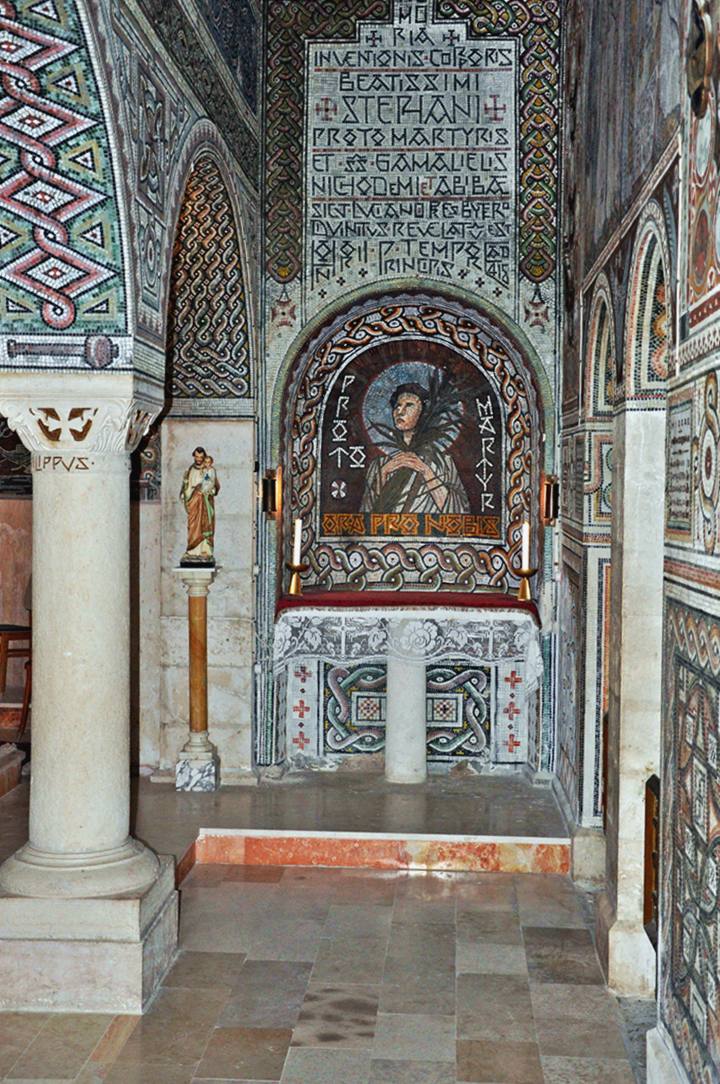 The north lateral niche is shown next with the painting of Don Bosco - the founder of the Salesian Society order who constructed and manage the property. Note the beautiful mosaic-like paintings that decorate the wall. 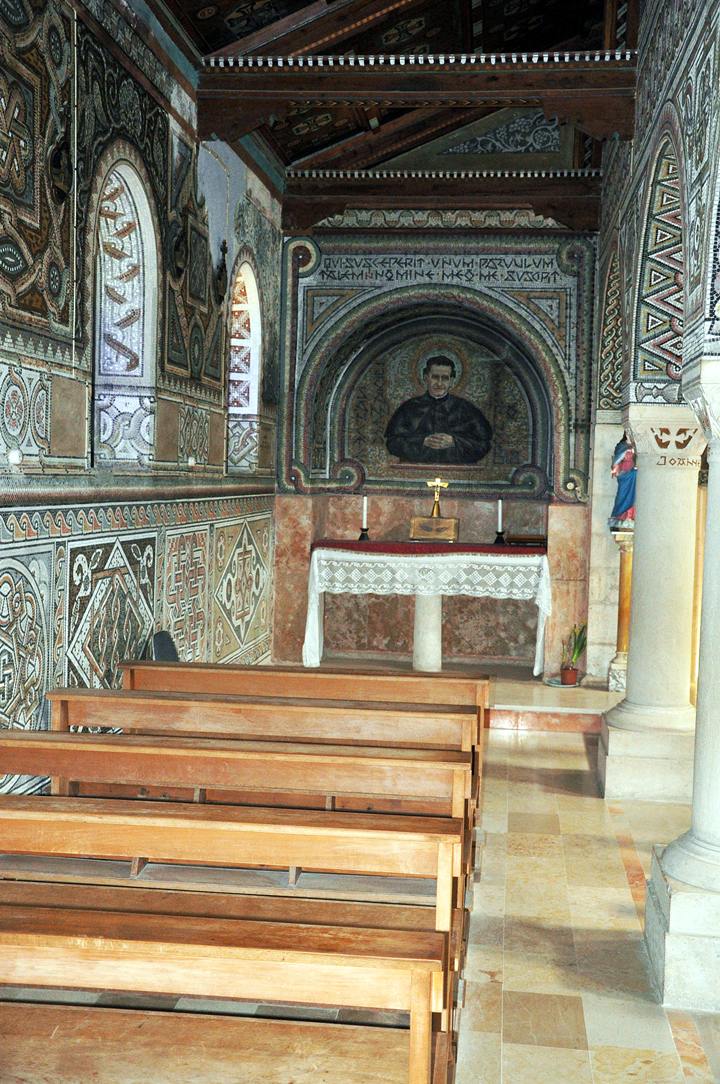 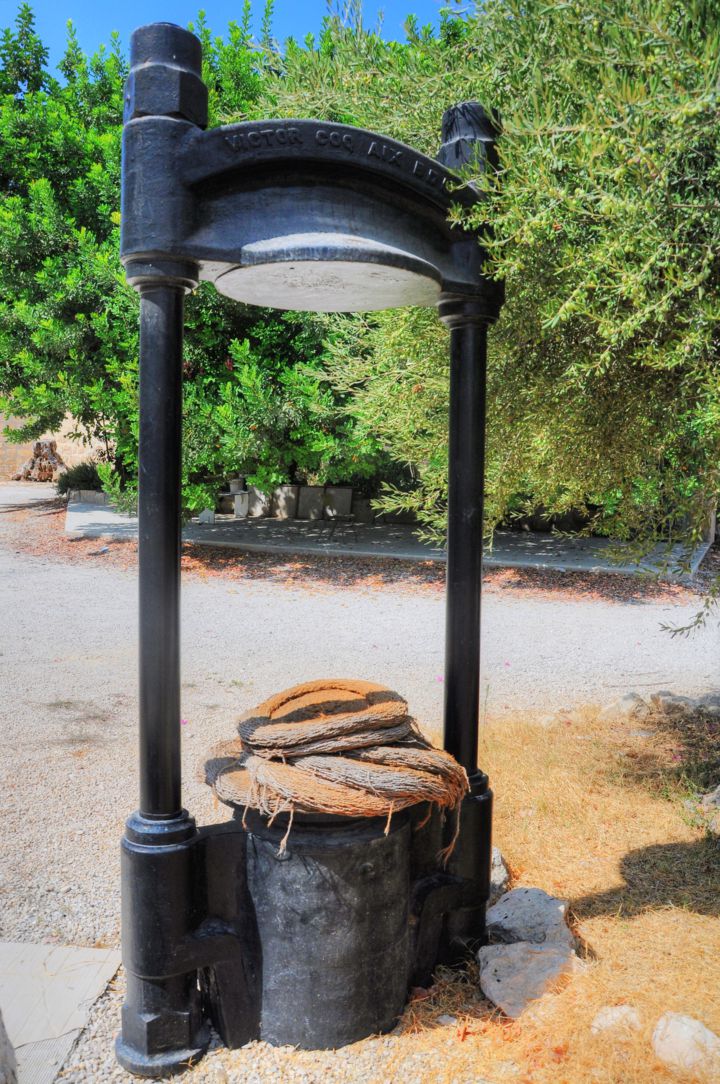 The baskets hold the olives during the pressing of the weight, allowing the juice to flow out and into a collecting vat. 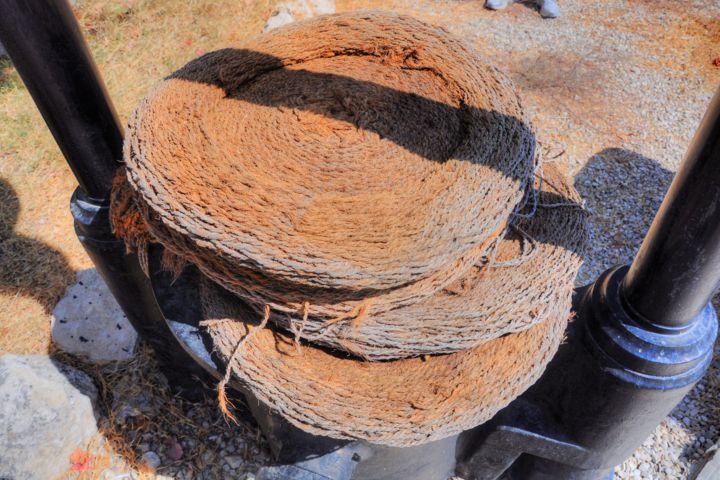 The stone basin below is part of an ancient (probably Byzantine) oil press. The olive oil production was one of the common incomes in the Byzantine monasteries. Another source of income was wine production, and there are several wine production installations around the site. 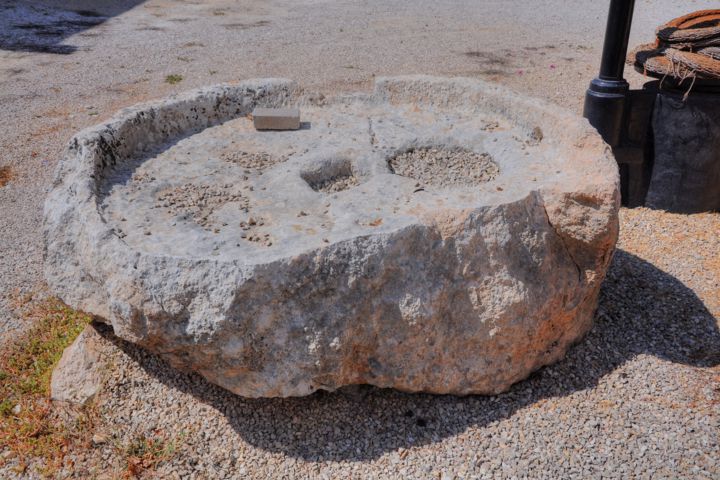 Another smaller ancient oil press is shown in the following picture. 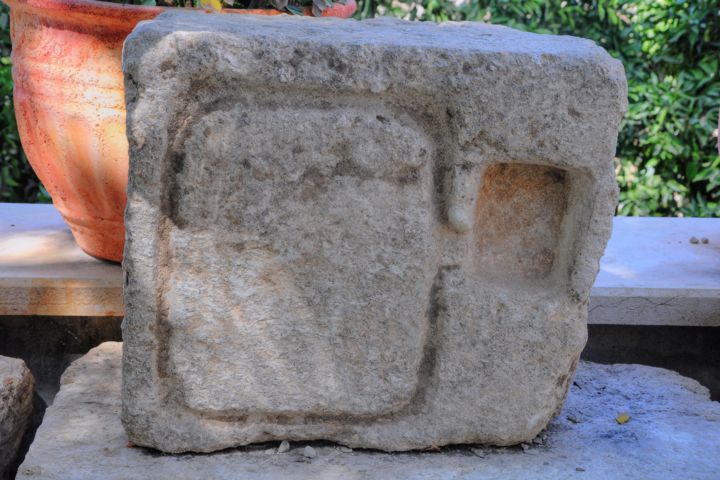 These two chapters describe the trial and stoning of Stephen in Jerusalem.

"...Stephen, a man full of faith and of the Holy Ghost, and Philip, and Prochorus, and Nicanor, and Timon, and Parmenas, and Nicolas a proselyte of Antioch:"..."And Stephen, full of faith and power, did great wonders and miracles among the people."

Paul tells that he was a student of Gamliel the Elder. Rabban Gamaliel was the president of the Great Sanhedrin in Jerusalem, a leading Pharisee scholar, and the grandson of the famous Hillel the Elder. He may have been the source of the name of the village of Kfar Gamala, which was then adapted by the Arabs as "Beit-Jamal":

"But Paul said, I am a man which am a Jew of Tarsus, a city in Cilicia, a citizen of no mean city: and, I beseech thee, suffer me to speak unto the people. Men, brethren, and fathers, hear ye my defence which I make now unto you. (And when they heard that he spake in the Hebrew tongue to them, they kept the more silence: and he saith,)  And when he had given him licence, Paul stood on the stairs, and beckoned with the hand unto the people. And when there was made a great silence, he spake unto them in the Hebrew tongue, saying, I am verily a man which am a Jew, born in Tarsus, a city in Cilicia, yet brought up in this city at the feet of Gamaliel, and taught according to the perfect manner of the law of the fathers, and was zealous toward God, as ye all are this day".