Tel Nes (Tell es Sanjak) – A volcanic cone in the eastern Upper Galilee region, 1km north east of Moshav Eliphelet. On top and around this natural basalt hill are ruins of a prehistoric settlement and Biblical city, with  traces of walls, terraces, rectangular buildings. A water reservoir is located inside the cone.

This aerial map indicates the major points of interest around the site.  The top of the hill is at altitude of 381m, rising about 25m above the surroundings. It can be reached by a dirt road from Moshav Eliphelet. 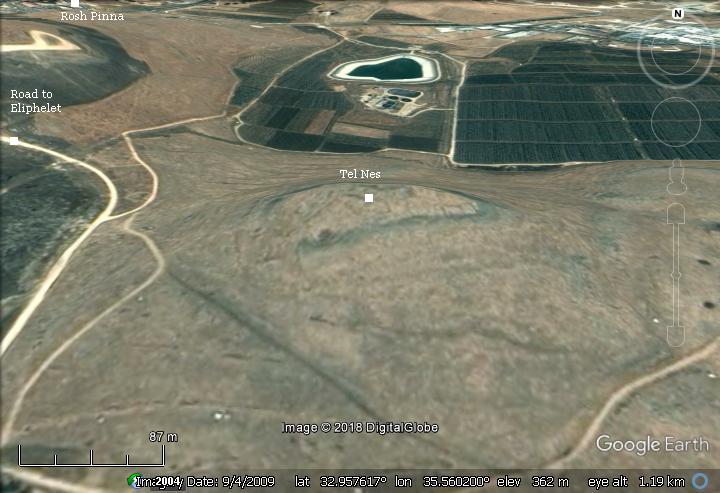 According to the ceramics survey and a short excavation, the site was first inhabited in the the Chalcolithic prehistoric period (4100 – 3150 BC), especially on the southern and eastern slopes.

According to the prehistoric excavation team, who in 2016 tested two squares on the southern foothills and one on the top of the hill, the remains from this period are not promising for full scale excavation for the prehistoric period.

The main fortification, however, was during the Iron Age II period (1000-586 BC).    Some scholars identify the Israelite city as Adamah (Joshua 19 32, 36): “The sixth lot came out to the children of Naphtali…And Adamah, and Ramah, and Hazor”.

The ancient city was located at a strategic location near the two major routes: north-south Via Maris (“Way of the Sea”) and North Eastern pass over the Jordan river.  The Biblical map below shows the location of the site and the major roads and cities during the ancient times. The city, marked with a red circle in the center of the map, is adjacent the main road from the Sea of Galilee to Hazor. Another route, which is not marked here, bypassed Hazor, connecting the site directly towards the Jordan crossing near the Ateret fortress (“Daughters of Jacob” bridge- Jisr Benat Y’akub). 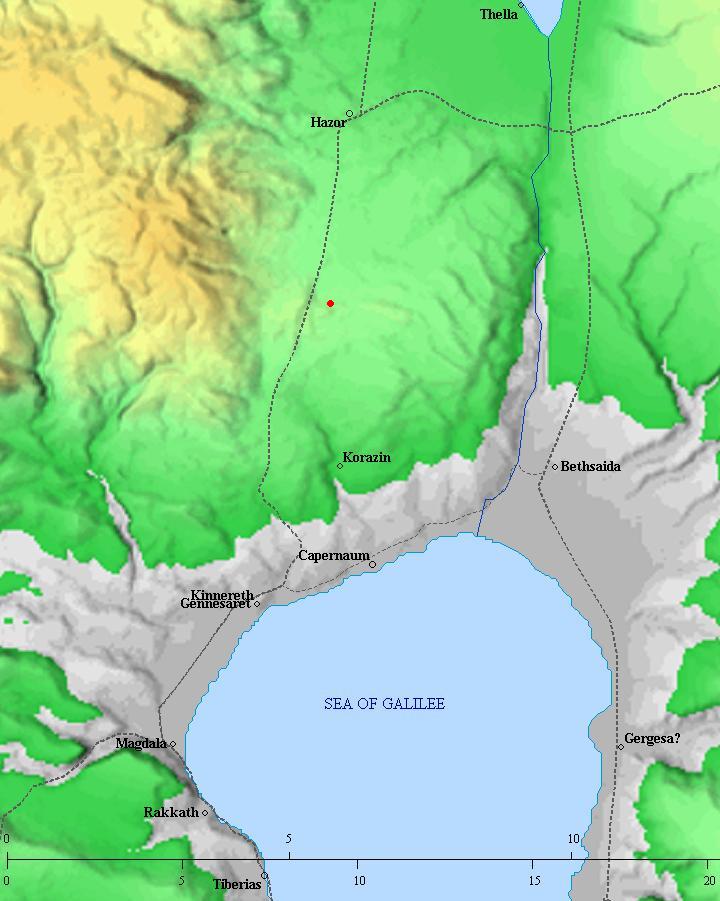 The archaeological survey dates its demise in the Iron Age II, attributed to the 732 BC Assyrian conquest of Tiglath-Pileser III (as per 2 Kings 15: 29):

“In the days of Pekah king of Israel came Tiglathpileser king of Assyria, and took … and carried them captive to Assyria”.

A section of their map is shown here.  The site is named here “Tell es Sanjak” (“The mound of the flag” in Arabic). The ancient road passes on its western foothills. 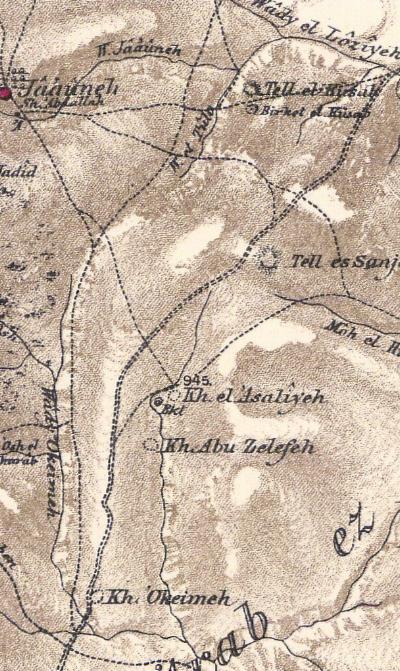 Part of map sheet 4 of Survey of Western Palestine,

The surveyors did not review the site. However, they described the road, seen here with double dashed line (Volume 1, pp 217-218):

“The principal road on this sheet is the old Damascus road,  leading from Khan Jubb Yusef till it crosses the Jordan at the bridge of Jisr Benat Y’akub. This bridge is mentioned in the times of the Crusades, and this road appears to have been always a main-road in the country in Roman times.

The portion of it on this sheet passes across a rough basaltic plain. In parts the road is still fairly good, but at others it is almost lost amongst the surrounding rocks”.

The ancient road passes along the foot of the west side of the Tel. It is visible for 250m. The road is 3m wide, with large stones on both sides.

As seen on this section of the map, there are several ruins along the road. One of them is Tell el Kusab – which is described in another web page.

A survey was conducted by Yossi Stepansky of the IAA in 1991. E. Damati examined the peripheral wall in 1983. Another preliminary investigation of the site was conducted in 2016 by the Galilee Prehistory project. A team headed by Y.M. Rowan and M.M. Kersel conducted trial excavations on the hill.

The site is near a military practice field, so observe the regulations if they are posted. Although the site is fenced in order to protect it, it could be visited.

A drone view of Tel Nes and its surroundings was captured from the south side looking north.  The site is situated in a barren and rocky area east of Moshav Eliphelet, south of Rosh Pinna.  The juxtaposition of the dull area of the site, with the green fields behind it, has a vivid contrasting effect. 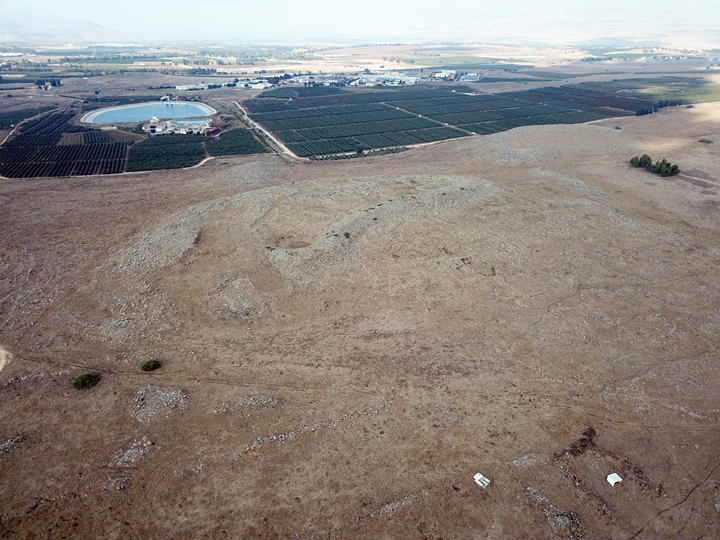 The next view is from the south side, looking towards north west. The houses of the town of Rosh Pinna are on the far left side.

The area of the hill covers roughly 100 x 200m. The ruined prehistoric city is surrounded by a massive peripheral wall 550m long and 1.2-1.4m wide. This wall, now collapsed, can be seen along the peripheral of the hill. The city gate may have been on the north west side. 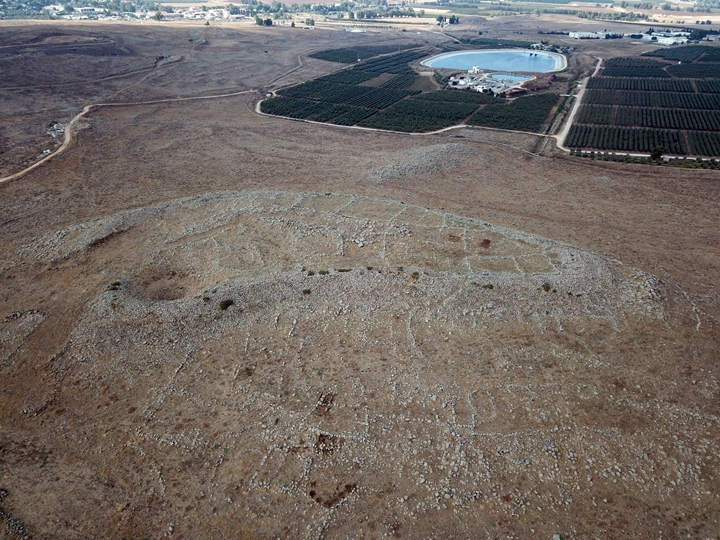 The hill is a volcanic cone of an extinguished volcano. It is situated in a vast area of basalt, formed from the rapid cooling down of lava exposed at the surface of this flat area.  This rock is dark in color, fine grained, and is a very hard rock to cut like granite.

A view looking west is next. The walls atop the hill and along the lower slopes are visible. 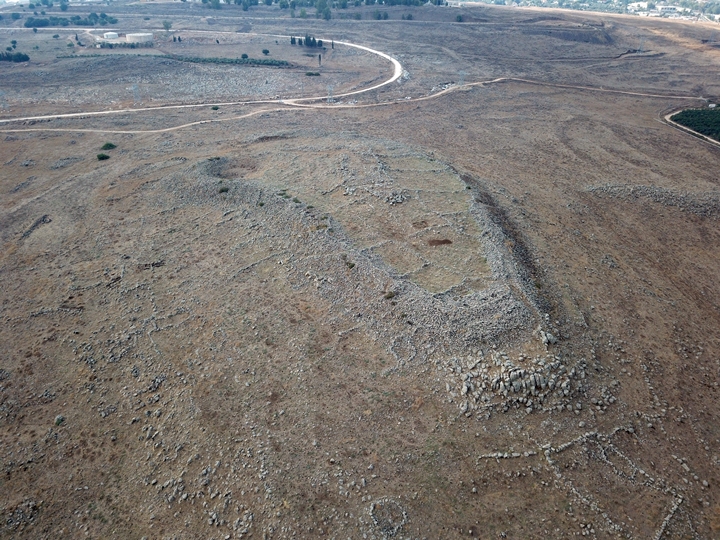 It is interesting to view this photo in negative, using photo processing filters to highlight the lines. The plan of the city pops up, showing ruins on top and around the hill. 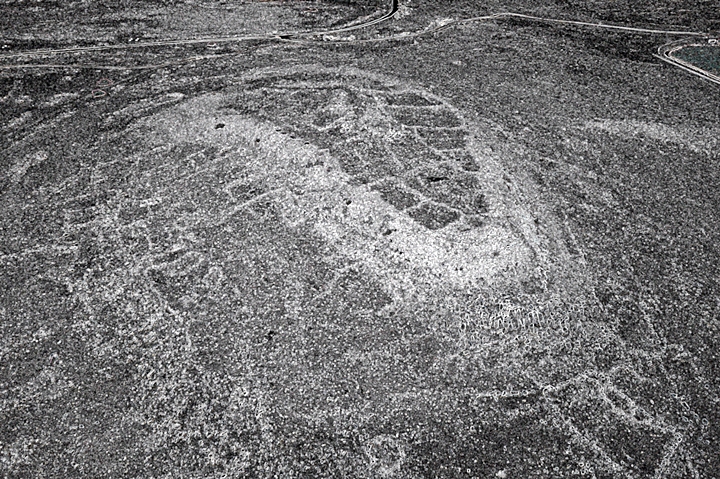 The following YouTube video shows a flight of a drone around the site. The drone starts from the south side and turns around the hill.

Approaching from the west side, this is the view of the hill. From afar, its just another basalt hill in a barren area. No trees, no bushes. 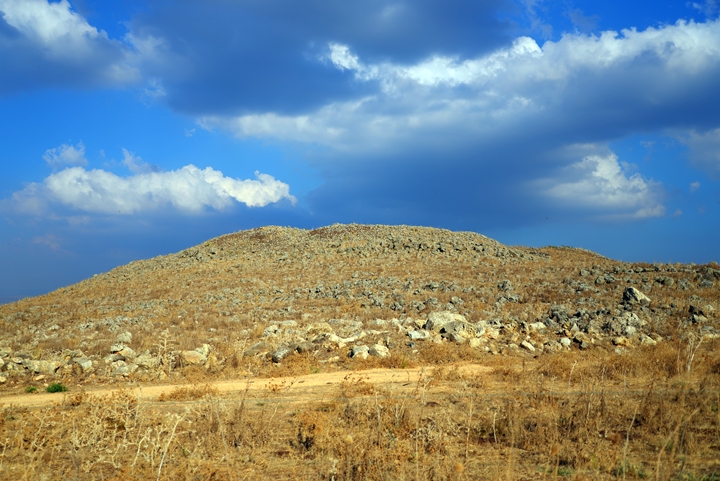 On the south west side of the hill is a modern path that descends to the top of the hill. 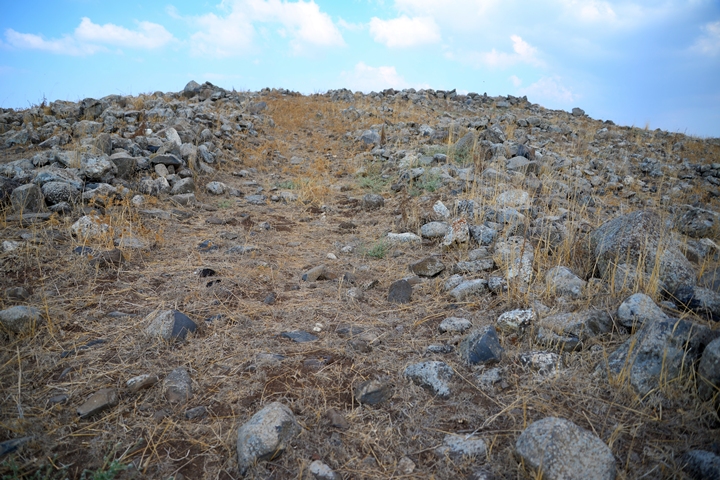 In this drone photo, a closer view of the south west side. The round cavity is a volcanic crater at the edge of a vent. It was used during the ancient time as a water reservoir.

On the south western edge of the hill is another deep cavity. This one was made in modern times by a bulldozer. 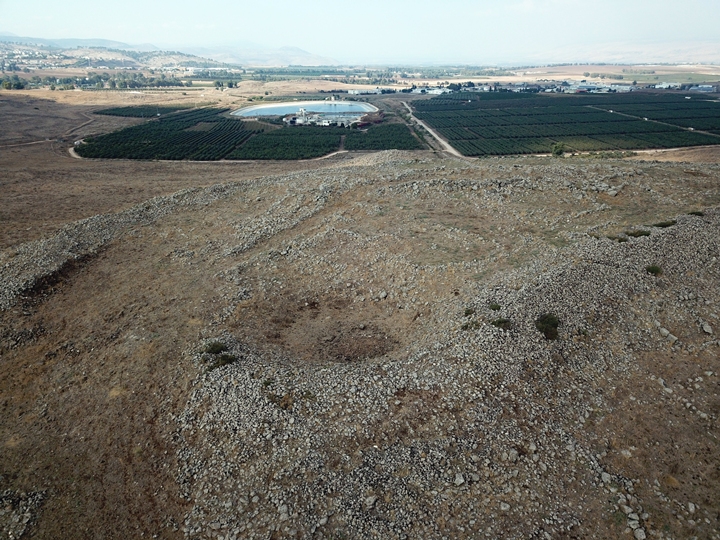 From the ground level, the crater is seen here from the hill top looking towards south west. 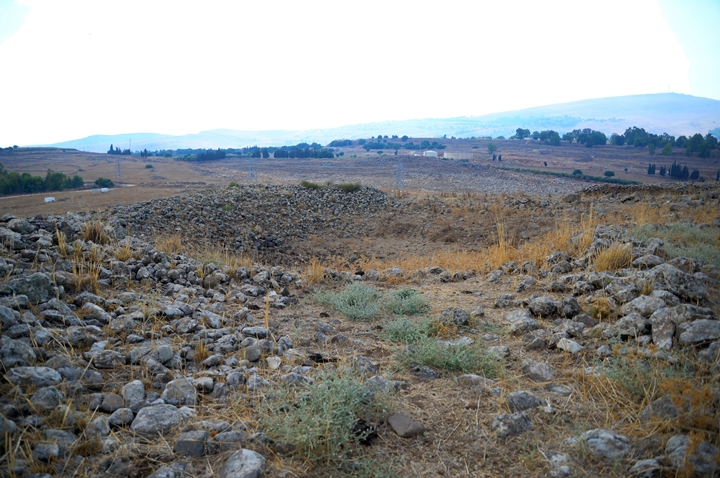 The crater fills up with water during the winter. The waters have no escape through the basalt rock, so it forms a natural reservoir.

The wall of rocks behind and above the crater is a section of the long peripheral wall. 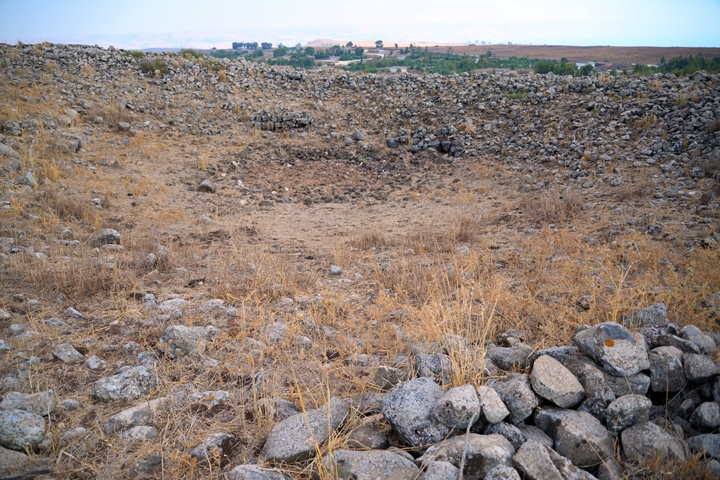 On the bottom of the crater is a built wall. 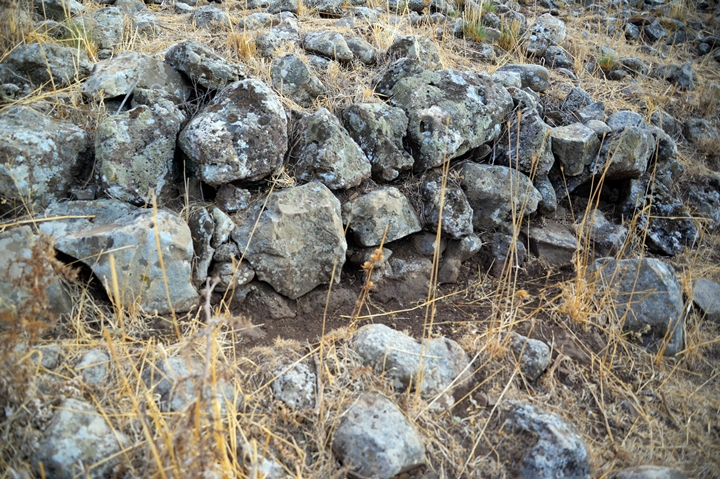 On top of the hill are remains of structures, walls, compounds and animal pens. The Iron Age remains here are in good state of preservation. 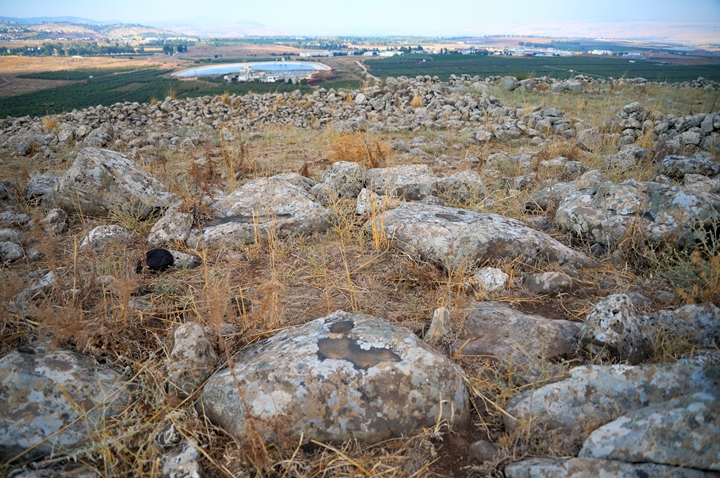 Among the ruins are ceramic fragments. Most of them from the Iron Age. 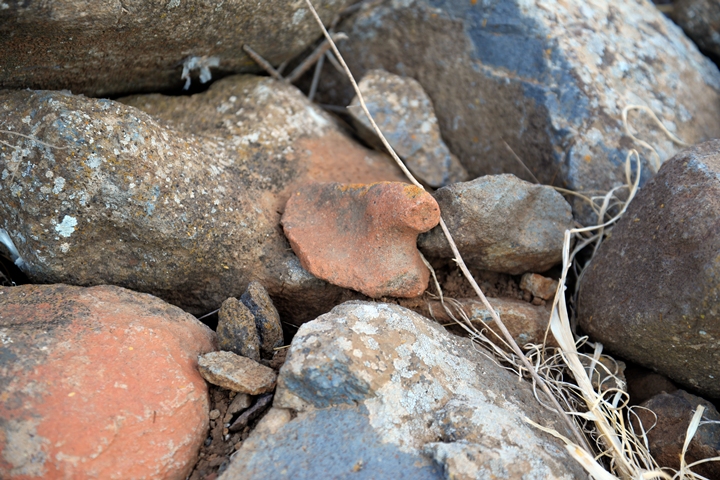 A closer view to one of the fragments: 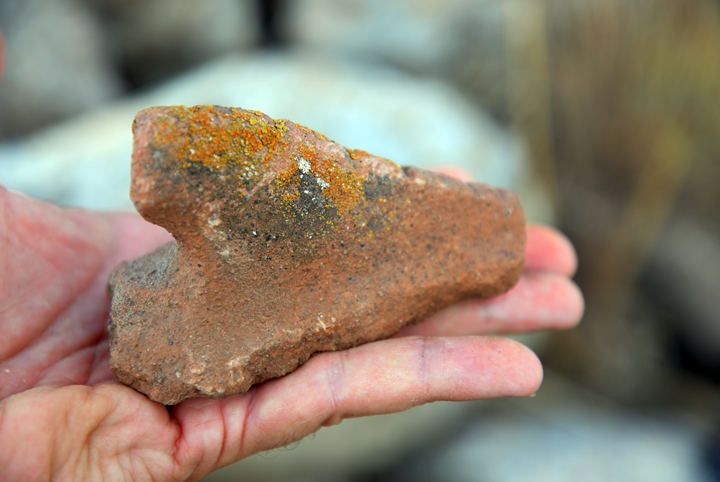 During this time of year – end of summer – the area is covered by thorns. 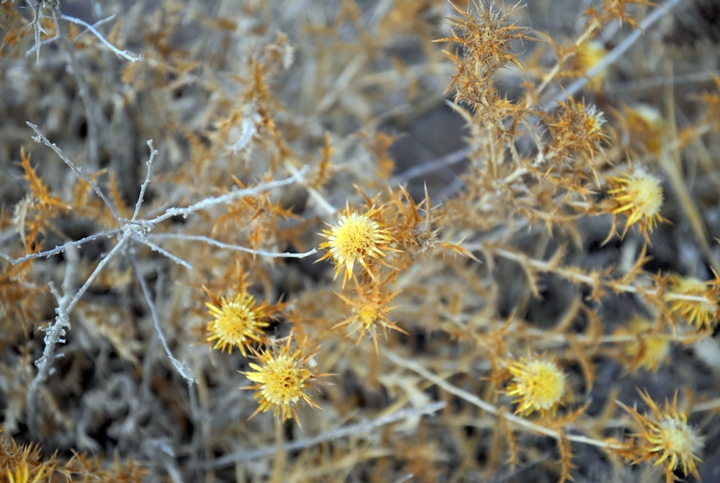 On the southern and eastern slopes of Tel Nes are traces of terrace walls, courtyards and foundations of of rectangular buildings. There are about 10 such buildings, which were dated to the Chacolithic period according to their building styles and ceramics findings.

The next photo is a closer view of the Chalcolithic area on the southern slopes.  The prehistoric survey (2016) opened two areas here:  two shallow 5 x 5m areas F1 & F2 (seen in the center) and G19 (5 x 5m square along terrace wall on a lower slope).  Both excavated areas are highlighted by a brown color, as a result of the dig. They found few flint stones, no animal bones, and mainly Chalcolithic sherds mixed with later periods.

The Chalcolithic ceramics that were collected here have a distinctive pottery known as “Golan ware”. They bear a dark red-brown color, are well fired ware with basaltic inclusions. They were probably imported from the nearby Golan heights, by merchants passing on the adjacent ancient road, and traded for other commodity. 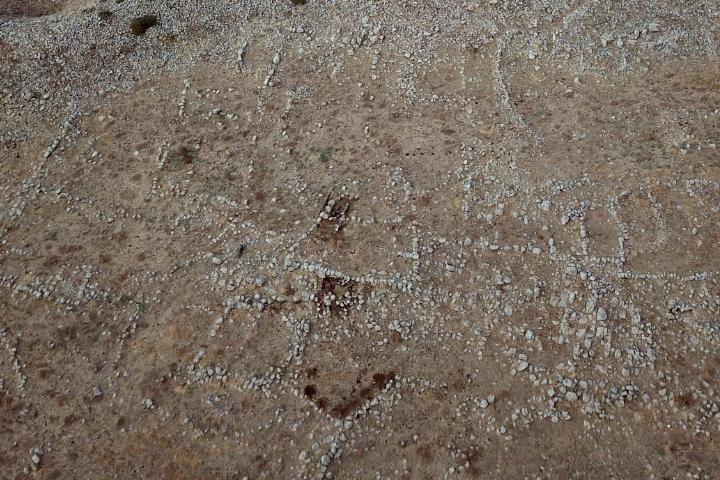 The eastern edge of the hill is seen here, as captured by the drone. Remains of walls on the hill and along the foothills are visible.

On the top of the hill, close to the eastern edge, is a square (J20) that was opened by the archaeological survey, then covered by soil. 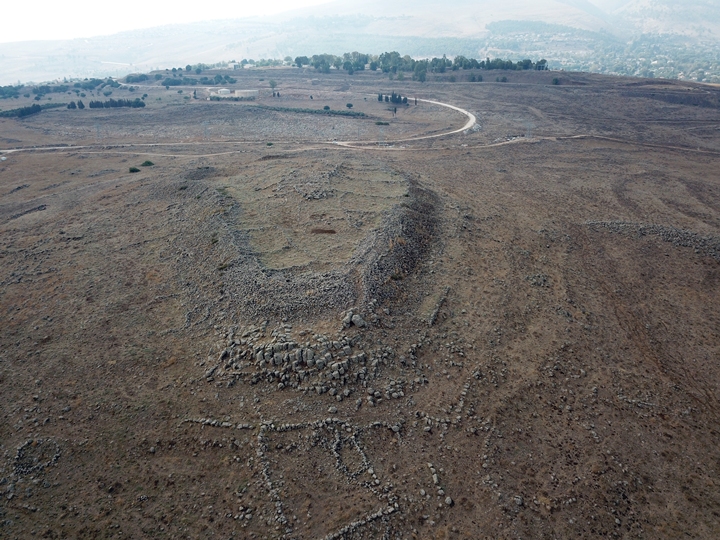 A closer view of the wall at the edge of the hill: 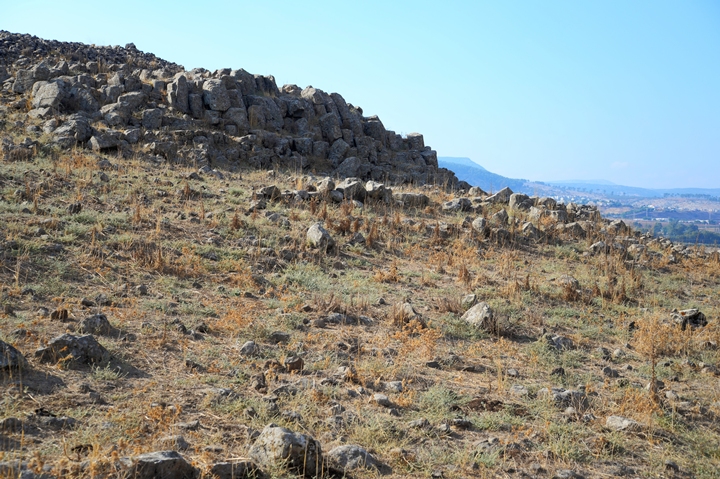 Beneath the edge of the hill is a courtyard enclosed by walls. 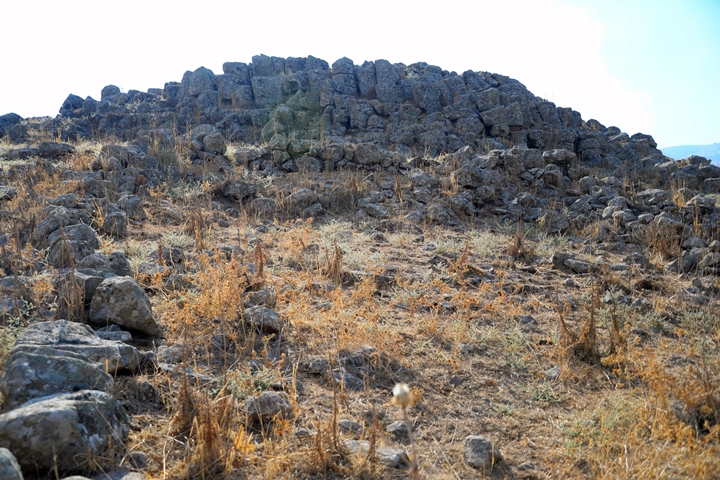 Another view from the side of the enclosed area: 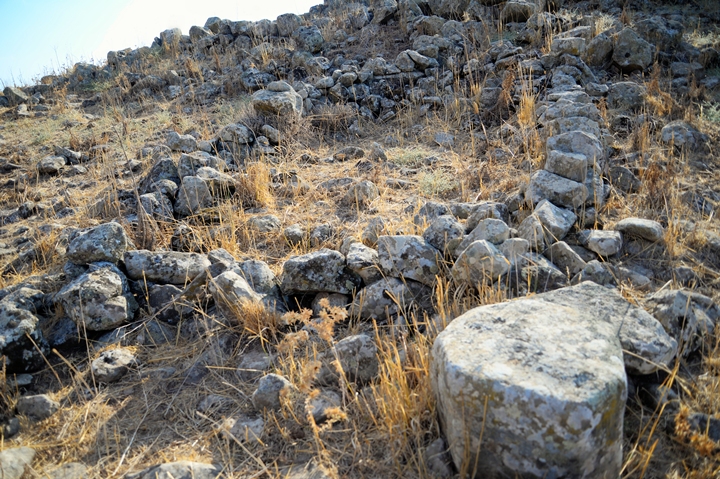 Along the north side are visible traces of the outer face of the walls along the peripheral of the hill. The length of the visible section is roughly 50m. This defensive wall is constructed with alternating sections of insets and offsets, with about 0.5m between the offset and the insets, which provides more strength than a straight line. It is dated to the Iron Age II, based on sherds collected by the IAA survey headed by Stepansky.

At the lower northern foothills is another massive retaining wall that ran in parallel to the peripheral wall. It is seen below. It is preserved to a height of 3 courses – 1.8m – on its eastern side. 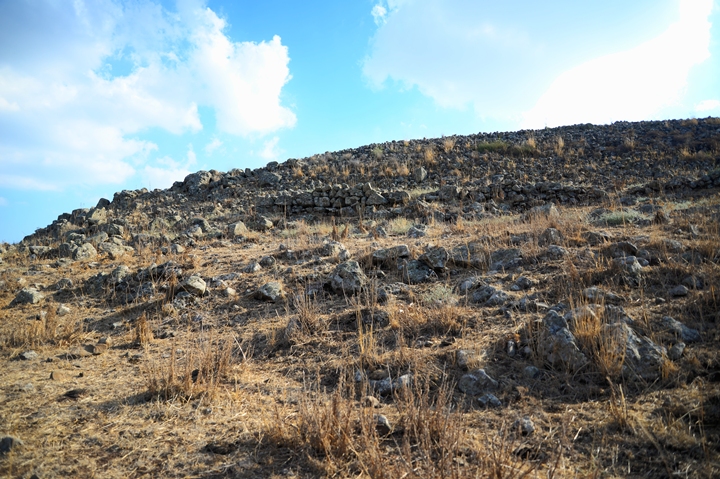 A closer view of a section of the lower retaining wall: 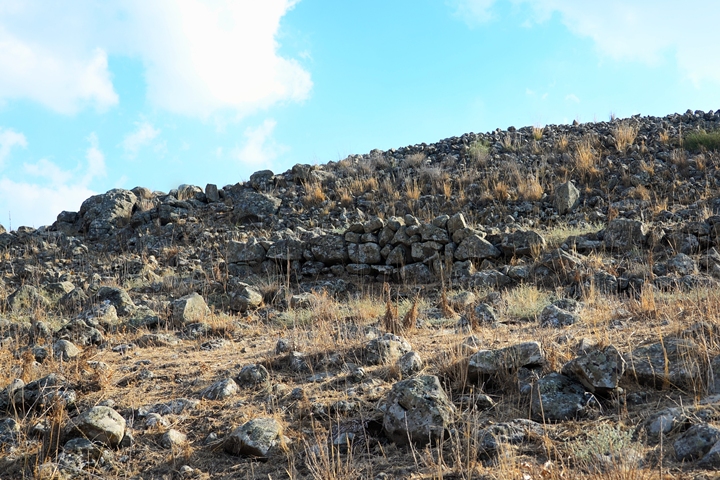 A view from the foothills of Tel Nes towards the north east is in the next photo, with another basalt hill. Notice a line of white markers – probably remains of a military exercise. 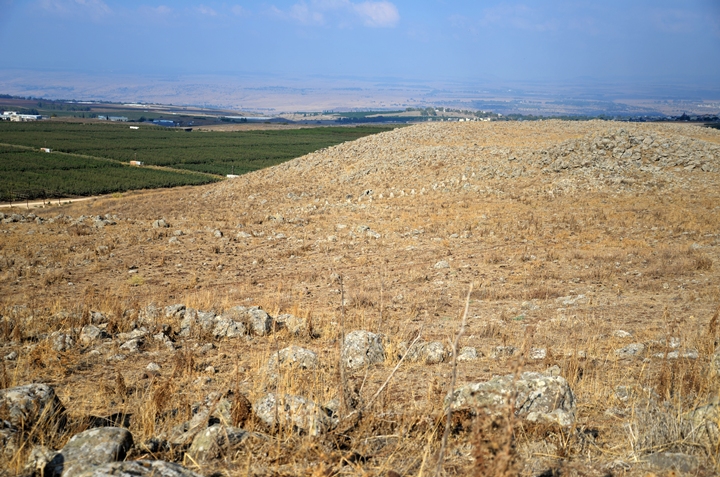 To the north of Tel Nes is another basalt hill, with a wall stretching towards it. 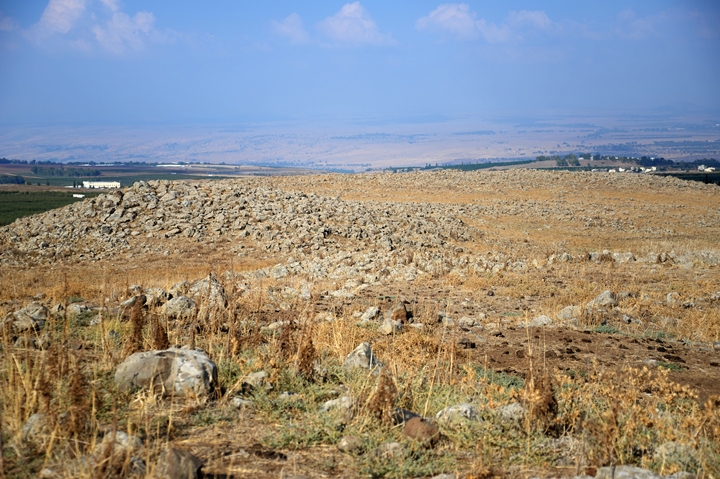 Another Iron Age period site is located 1.5km to the north. It is situated on twin basalt hills. To the far left is Rosh Pinna. In the far background are the mountains of eastern Upper Galilee, bordering with Lebanon. 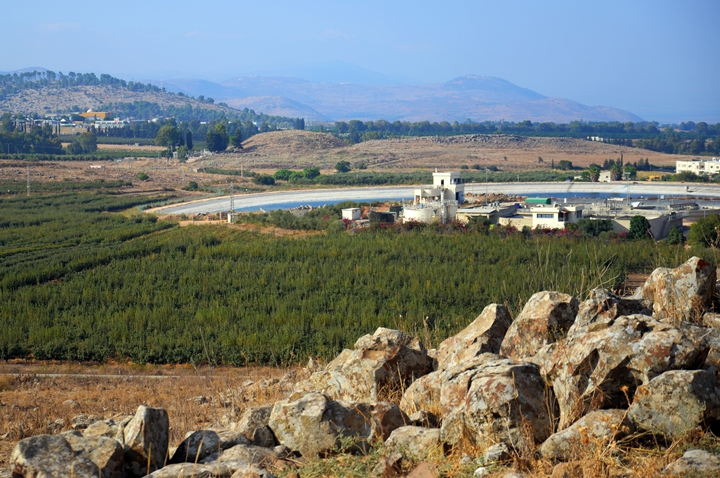