Ruins of a second temple period village (Biblical Rabbah?), in the Judean foothills region south of the valley of Elah.

Horvat Rebbo is an archaeological site, situated on a hill between the valleys of Nahal Shua and Nahal Shochah. The site is located 1km west of Moshav Aderet, within the Adullam-France National Park, in the area of the low hills (Shephelah) of Judea.

On the summit of the hill are ruins of residential complexes with hewn caves, cisterns, installations, and columbariums. The site was settled during the second Temple period. Hiding complexes of the Bar-Kochbah revolt and a ritual bath (Miqveh) indicate that it was a Jewish village. It continued to be settled in the Byzantine period.

The following aerial view shows the area of the ruins. The site covers 100 acres, situated on the top of a knoll at an altitude of 414m.

Access to the site is from Highway #38 from a park road that starts near Moshav Tsafririm. Follow signs to Horvat Midras, but pass the turn to Midras, continuing 1.5km until a turn north to the site near a junction east of Matzad Hakhlil. A dirt road leads up to the ruins. 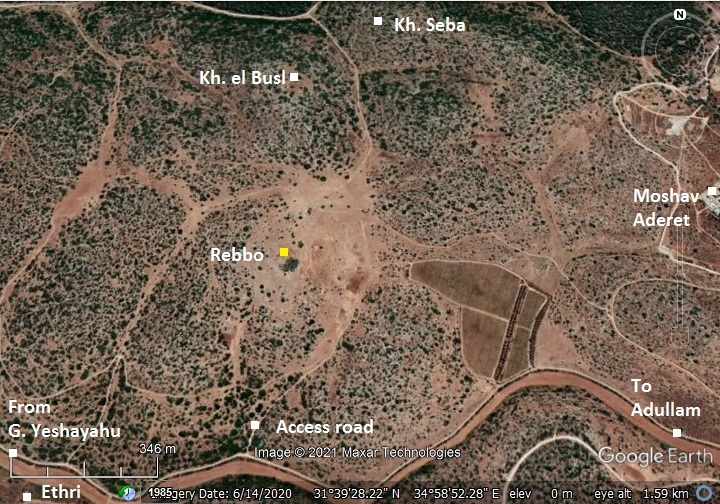 The Bible lists a village in the region of the tribe of Judah (Joshua 15:60): “…Kirjathbaal, which is Kirjathjearim, and Rabbah; two cities with their villages:”.

The 4th century AD Eusebius of Caesarea identified it as a village in his Onomasticon reference book of Biblical sites (line #779): “Rabboth – … There is now another village Robbo in the region of Eleutheropolis [Beit Jibrin] to the east”. The 19th century PEF survey wrote about the site (SWP Vol 3, p.360): “Khurbet Rubba —Caves, cisterns, and heaps of stones, ruined walls, bases of pillars and shafts much worn, two lintel stones with crosses…”

IAA surveys (Zisso and Genor, 2000-2001, Eitan Klein 2011-2013) uncovered various installations and building on and around the site. These included: mikveh (ritual bath), wine presses, parts of an oil press, quarries, underground storage chambers, cisterns and burial caves. They dated these to the Hellenistic, Hasmonean, Herodian, Early Roman periods. On one of the underground walls they dated a rare inscription of a boat to the Hellenistic-Early Roman period.

A map of the cities and roads of the Iron Age period is here. The site, marked in red (as Rabbah?), is 2km  north west of Adullam and 2km south of Socoh in the valley of Elah. 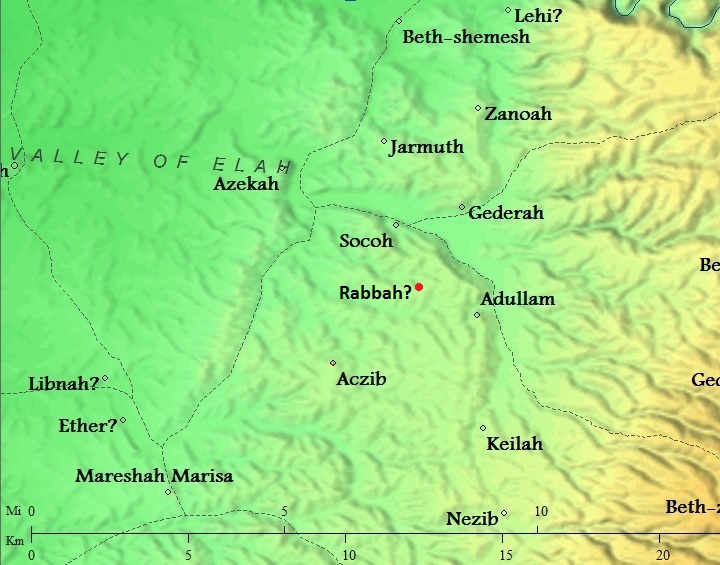 Horvat Rebbo is located near another village of the same period – Horvat Ethri, which is 2km to the west.

Hiding complexes of the Bar-Kochbah revolt were found on the hill.

During the second (Bar Kokhba) revolt in the 2nd century AD, Jewish residents across most of the villages in Judea tried to save themselves by constructing underground hiding places. Most of these rock cut tunnels and chambers were constructed under or near the residential buildings. The Roman historian Cassius Dius wrote about this (Historia Romania, 69, 12, 3):

Jews were forbidden to return to all settlements in the vicinity of Jerusalem. Eusebius Pamphili of Caesarea, a 4th century Greek historian of the Church, wrote about this ban in the 4th century (Church History, Book IV, Ch. 6, 3):

According to the PEF report, the site was inhabited during the Byzantine period. Victor Guerin reported on remains of a Byzantine church. This led scholars to identify the site with Ribba/Rebbo, which was listed by Eusebius (Onomasticon) as located in the region of Eleutheropolis (Beit Gubrin):

“About 7 miles northeast is Kh Ribba, not on a Roman road, which retains the name”.

They added a short review of the site, describing findings that are same as another site that they reviewed (Volume III, sheet XXI, p. 360):

“Khirbet Rubba (J u).—Caves, cisterns, and heaps of stones, ruined walls, bases of pillars and shafts much worn, two lintel stones with crosses, both measuring about 7 feet by 2 1/2 feet.”.

“Khurbet Umm el ‘Amdan (J u).—Cisterns, caves, foundations, and heaps of stones. It appears to be a Byzantine ruin, but
pillars were not observed”. 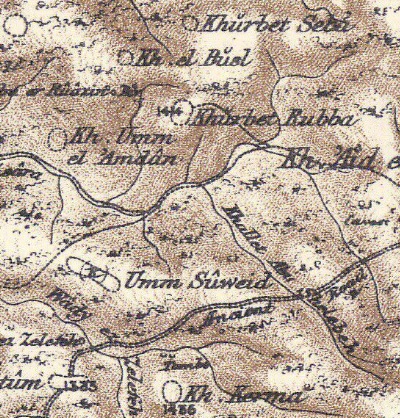 A map published in the 1940s shows the area around the site – named Kh. Ribba. The majority of the ruins are marked (as small dots) on the summit (trig point 316N, altitude 426m). 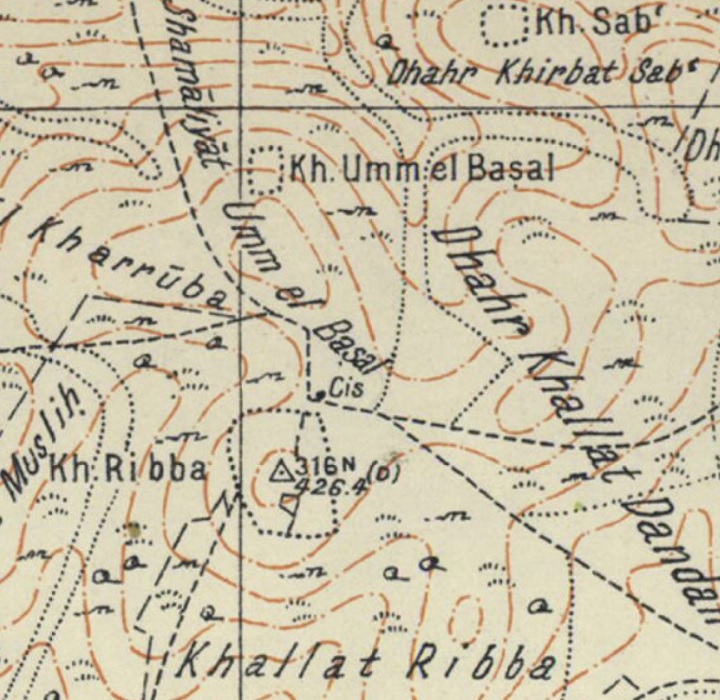 An aerial view was taken above the site, with a view towards the west. The mountains of Judea are seen in the far background, and Moshav Aderet is on a hill on the left side. 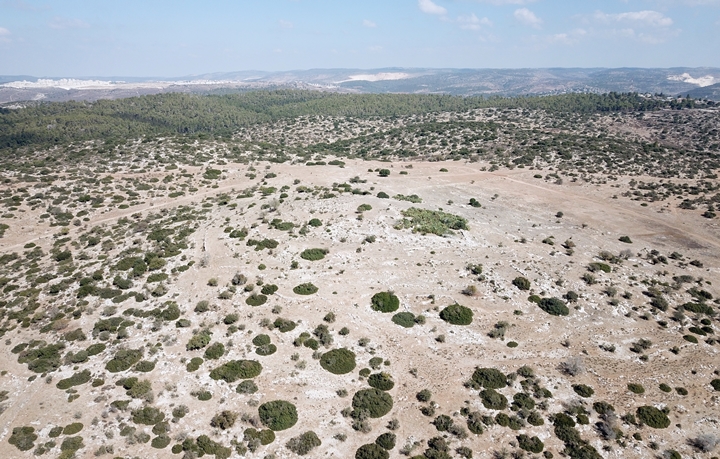 A vertical view of the hill is below, also viewing towards the west.

Traces of walls are seen on the summit. 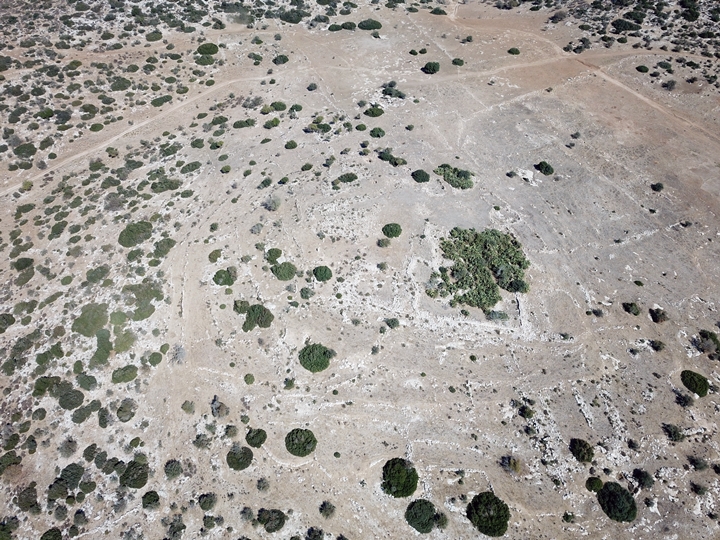 Scattered ruins cover the surface. The site was not yet excavated, and most of its remains are either covered under the ground or robbed and reused in nearby Arab villages. 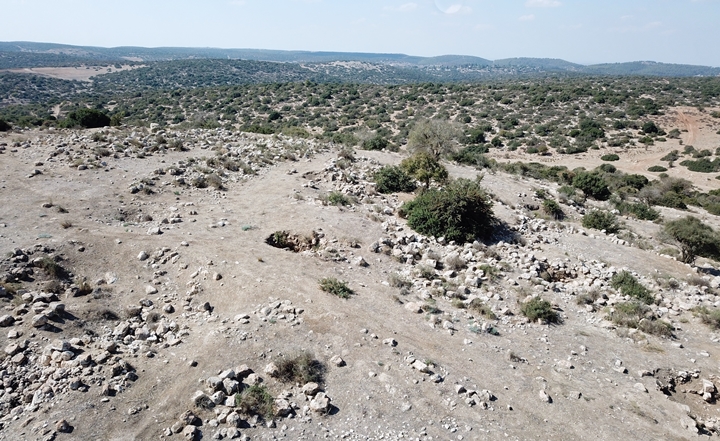 We drove to the site along a paved road from Giva’at Yehayahu, and parked the car in the valley. Then, walked up the dirt road that ascends to the east side of the hill. 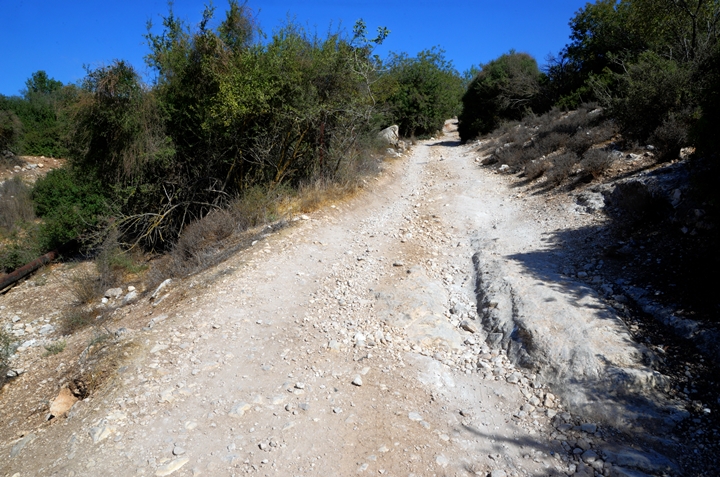 Along the ascending road are old agriculture terraces. The hill is seen here behind the bushes. 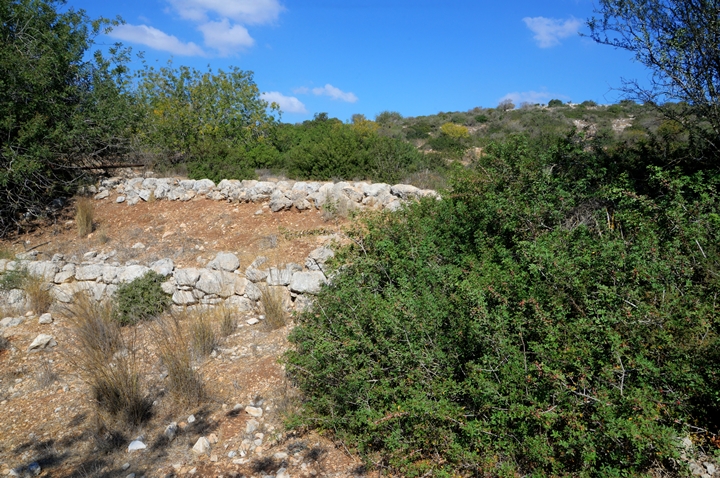 Then walked up the foothills… 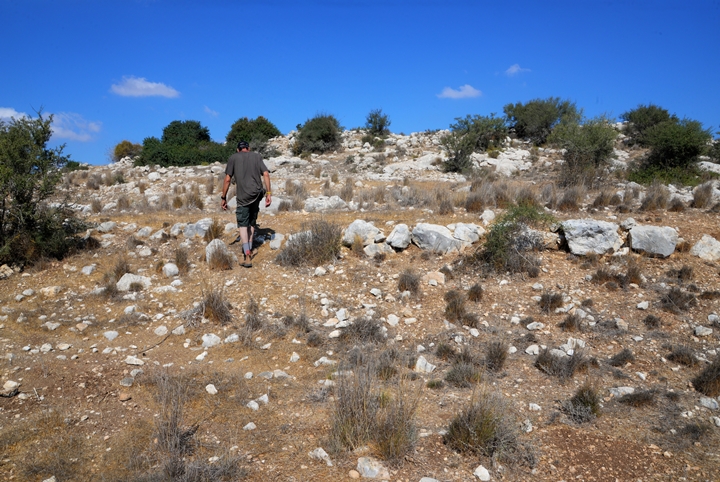 A view from the foothills towards the east: 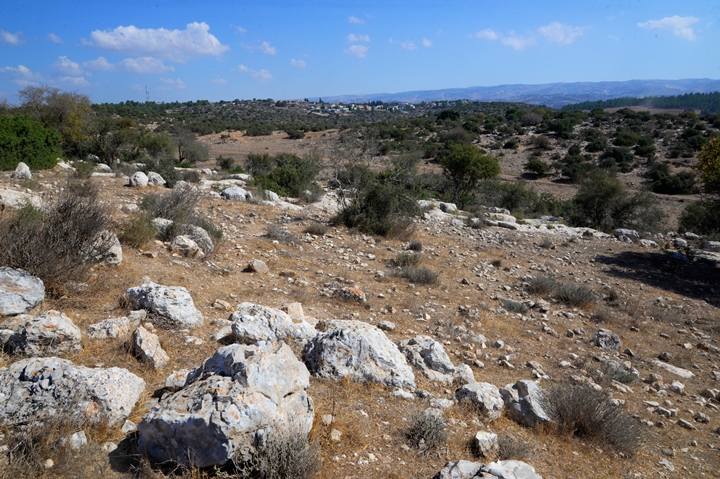 An aerial view of the summit is seen here. 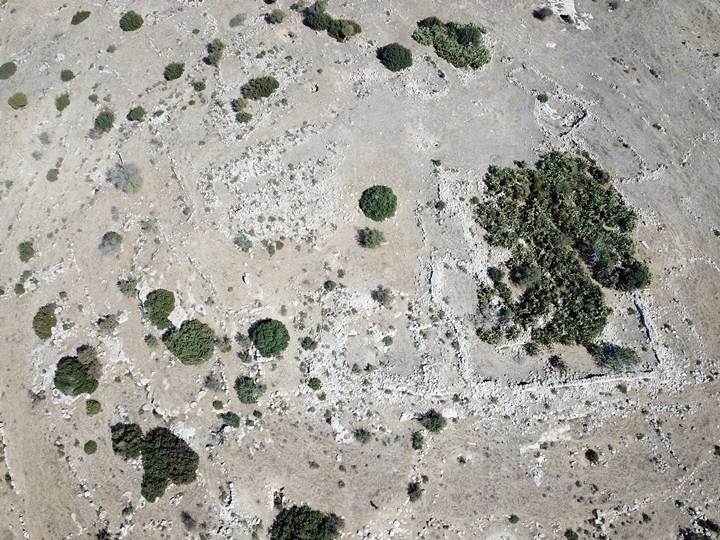 Below – a view of the ruins on the western side of the summit. 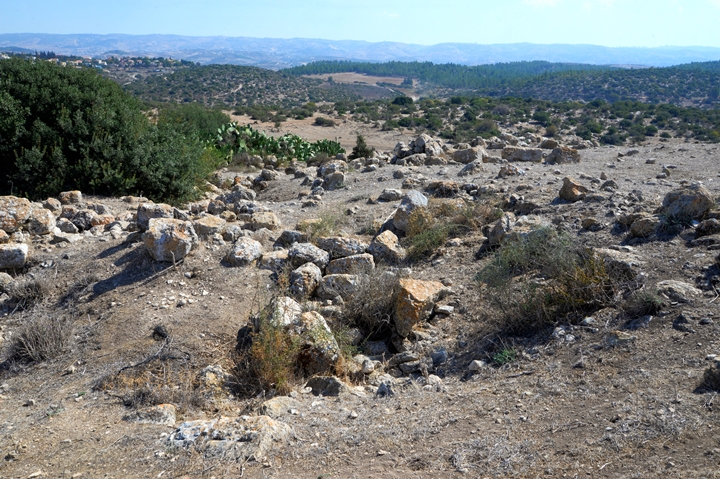 In the center of the site is an enclosed area with trees and bushes. 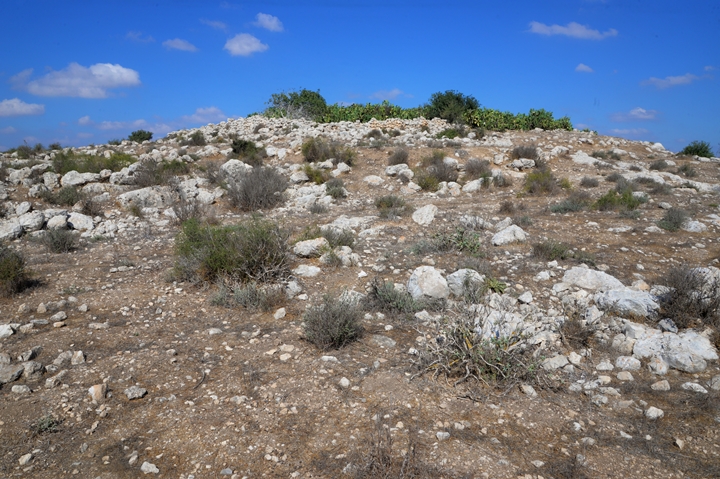 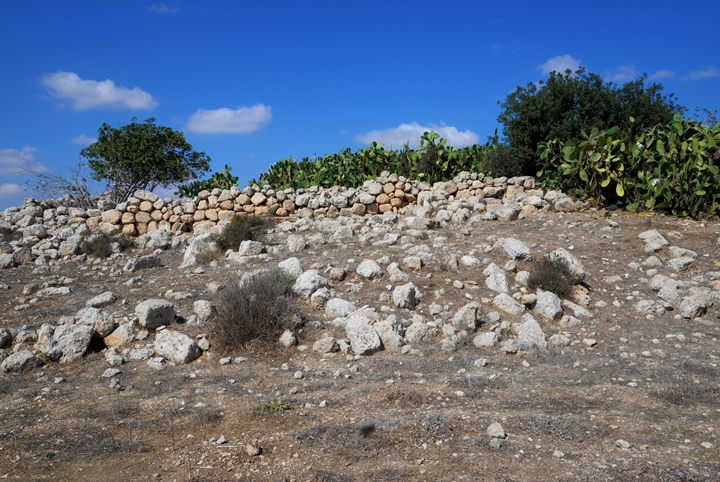 Looking around for architectural remains, we found this long carved stone, a threshold or part of an oil press. 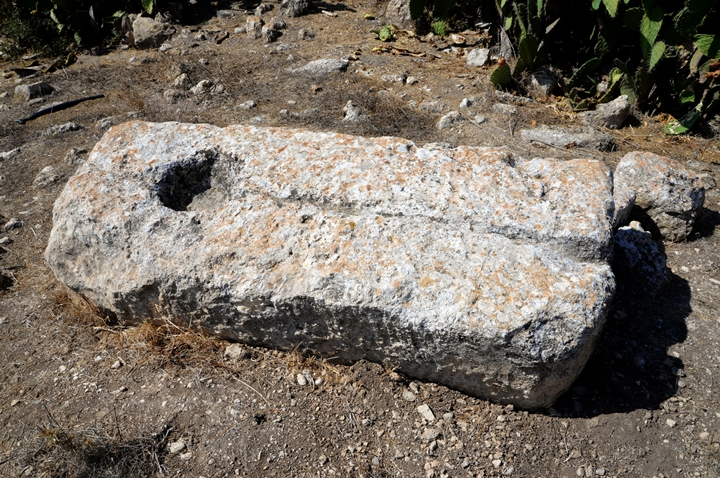 Nearby is a column standing inside the wall. 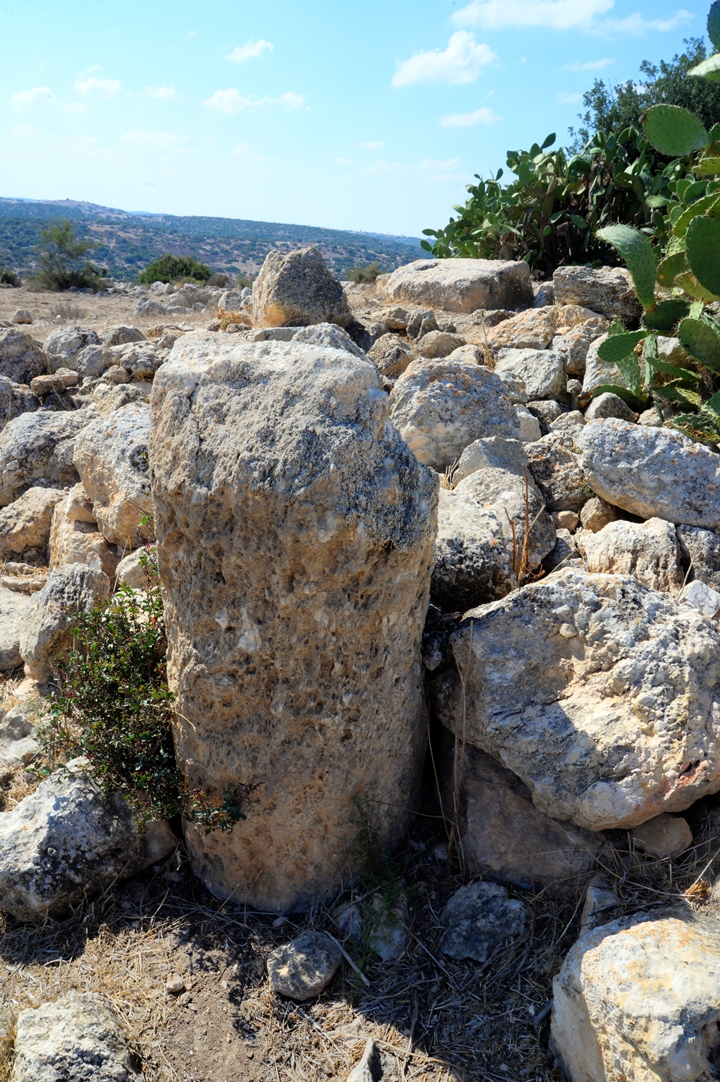 Below the surface are underground storage chambers, cisterns and burial caves. The following photos are samples of entrances. 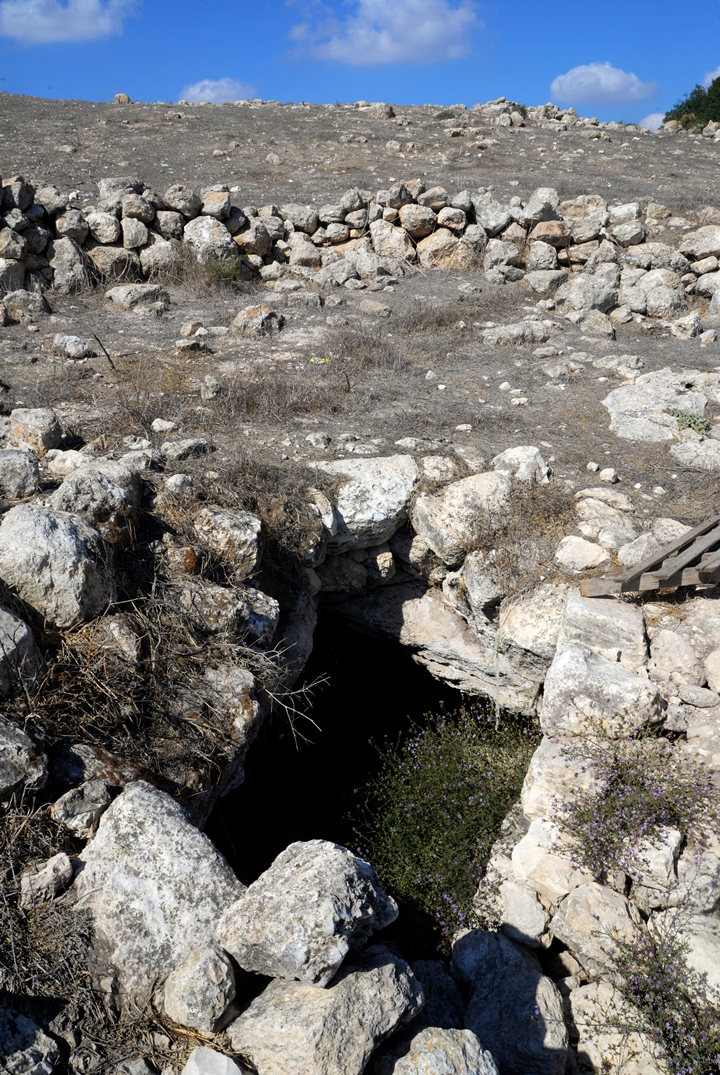 In one of the caves a ritual bath (miqveh) was identified: A rectangular corridor descends towards an opening with an arched lintel, then opens to a trapezoid chamber covered with gray plaster. 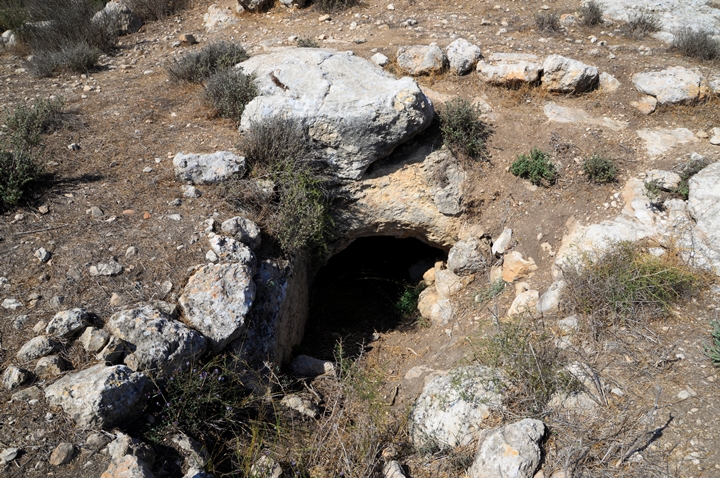 An opening to a cistern, part of an extensive underground system. 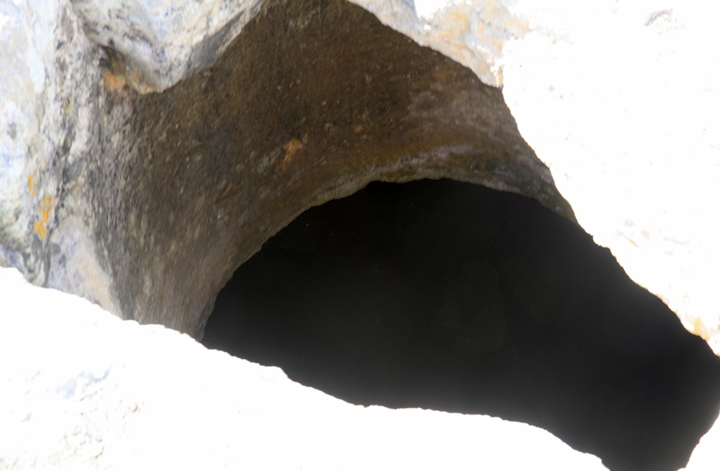 On the surface are ceramic fragments. Here is a sample: 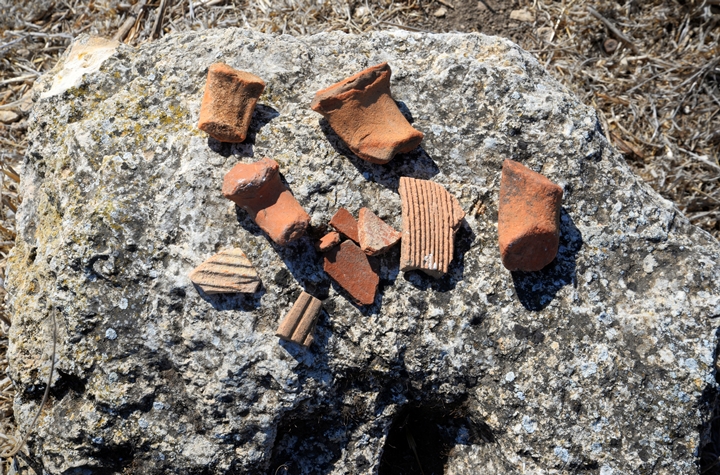 A piece of glassware was also spotted: 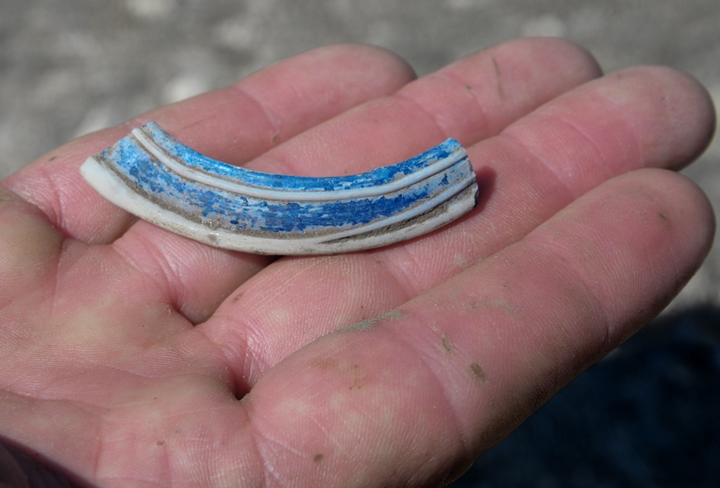 On the eastern side we found a winepress, with a treading floor and a collecting pool: 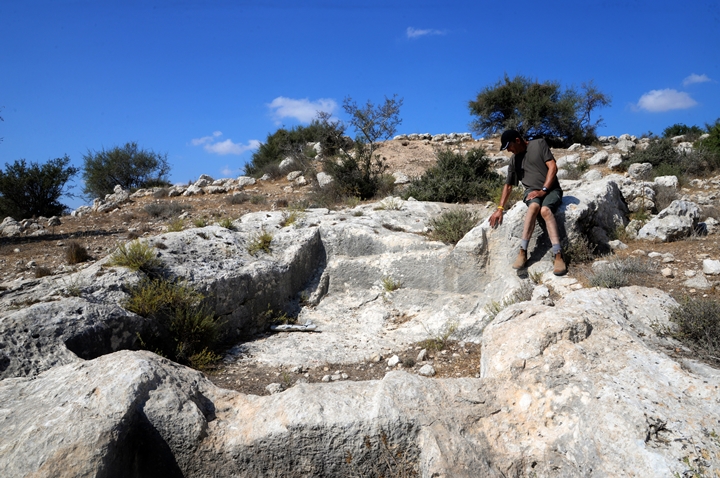