On the south east ridge of Ramat Boker (also: Ramat Boqer), north of Nahal Boker valley, are ruins of an Iron Age fortress and houses. It guarded the ancient east-west desert route thru Nahal Besor.

The site is located about 5KM north-north-west of Kibbutz Sde-Boker, 1km west of highway #40 from BeerSheba to Mizpeh-Ramon. A dirt road leads from the highway to the valley, with a short walking distance up the hillside to the ruin. 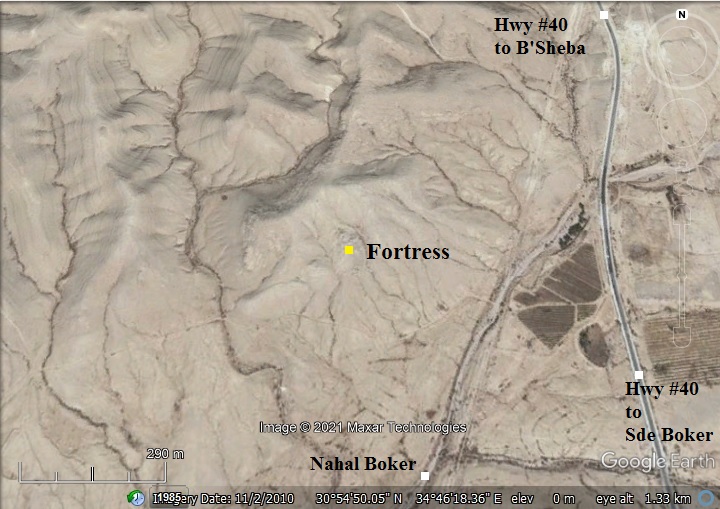 The fortress of Ramat-Boker (also: ‘Ezboah’) is one of the small forts. It was built in a irregular triangle-shaped plan that fits the topography of the hill.  The fortress, built in the 11th-10th century, overlooked a vast area of the valley where a major trade route passed. Several dwelling structures were built on a lower level. The site existed for a short period.

Who built this fortress, as well as others in the desert area? Scholars offer various identifications. Some relate their construction to the royal administration of the Judean Kings, such as David and Solomon (only the small forts), or to Jehoshafat (870-849 BC) and  Uzziah (mid 8th century) for the large fortresses with towers.The fortresses offered protection on the major trade routes and established control and royal presence.

The Bible tells us about these desert constructions (2 Chronicles 26: 9-10): “Moreover Uzziah … built towers in the desert, and digged many wells: for he had much cattle, both in the low country, and in the plains…”. 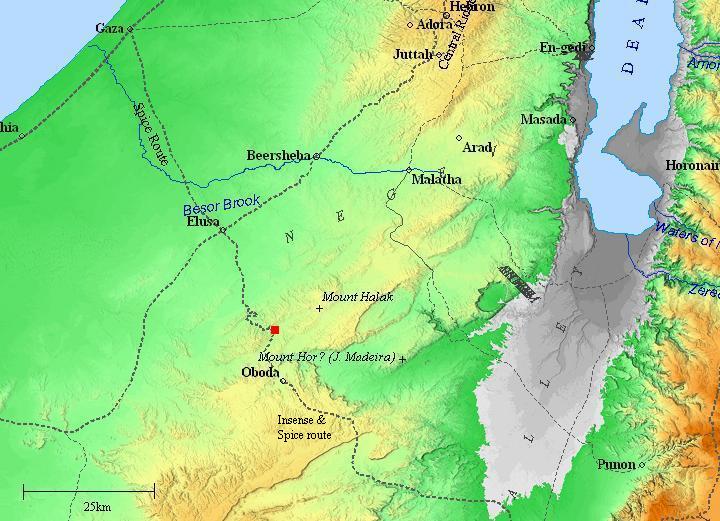 The site was excavated by R. Cohen (IAA) in 1975. Two areas were examined:

Ramat Boker fortress is in an open public area, not far from highway #40.

(a) Walk to the site

The site is located above the north bank of Nahal Boker. A modern wall was constructed to avoid the erosion of the valley floor from flash flooding.

Along the valley are remains of ancient dams, used to collect water for growing crops. 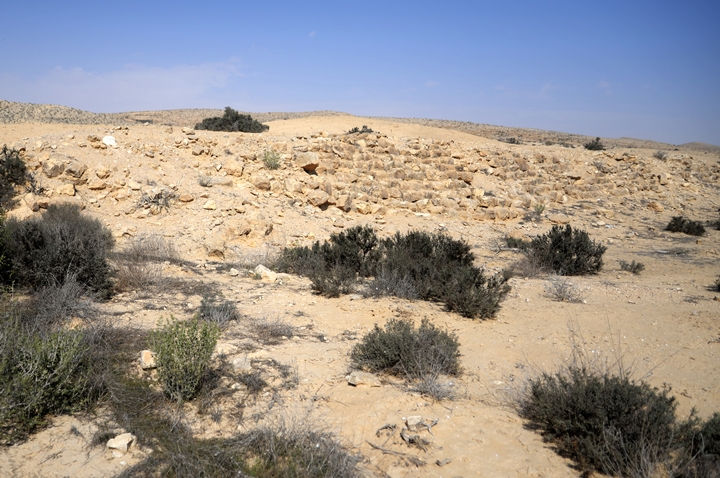 A herd of sheep passed us along the walk up to the site. 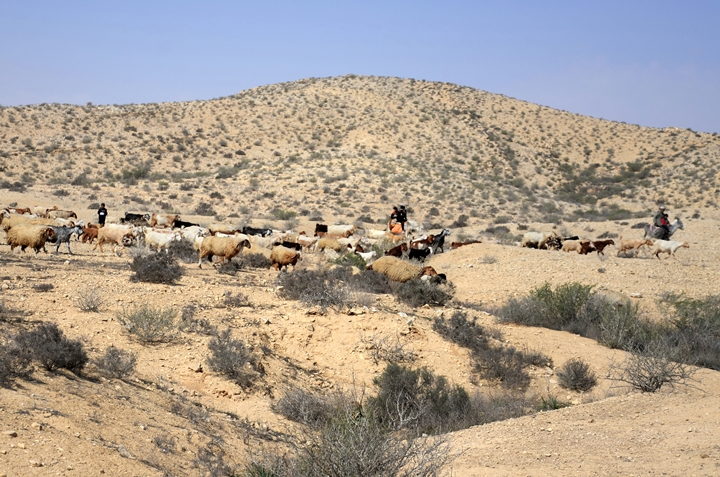 The site, seen here on the foothill, is located on the south-east ridge of Ramat Boker (Boker heights). 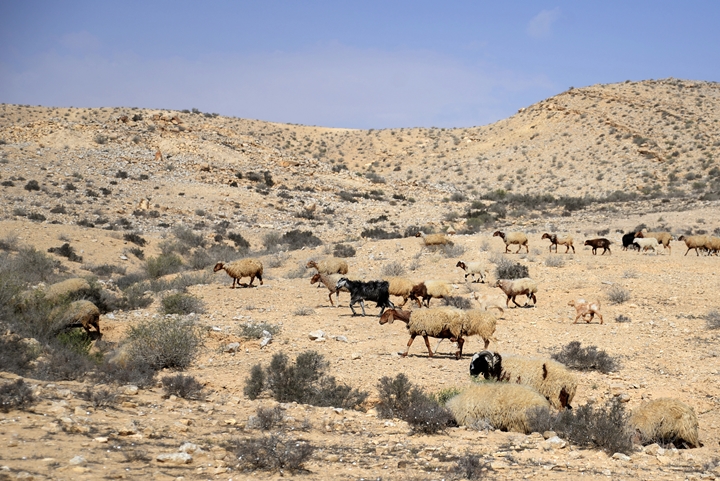 In the foreground is the settlement, mostly covered except for one of the houses that were excavated. In the background is the hill on which the fortress was built. 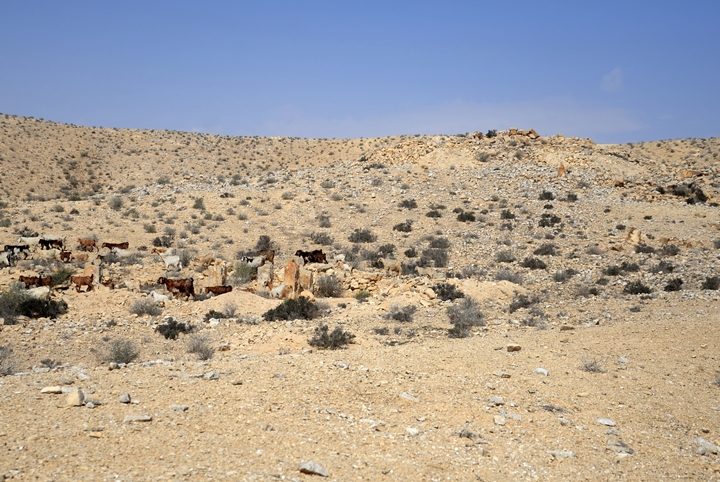 At the southern foothill of the fortress was a small settlement, built of 6 structures. Only one, the southernmost, was excavated and unearthed. 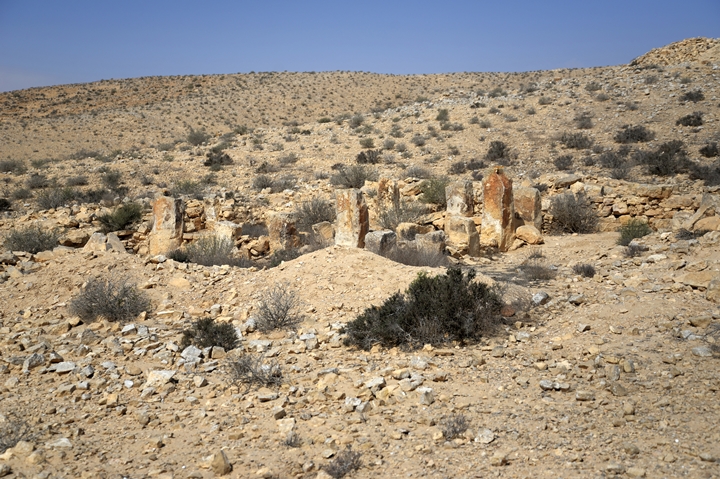 The structure is a typical Iron Age “4-room house” (also: pillared house”). The house covers an area of 12m by 9.50m, with walls 0.5m wide. The ceramics collected in the structure were typical of the 10th century BC. 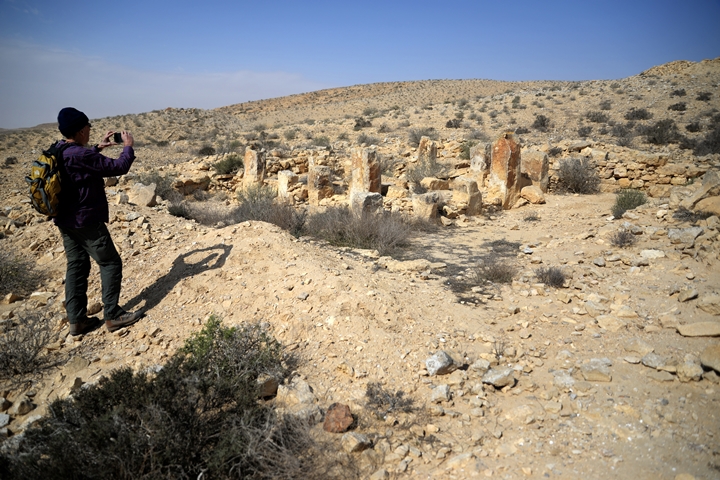 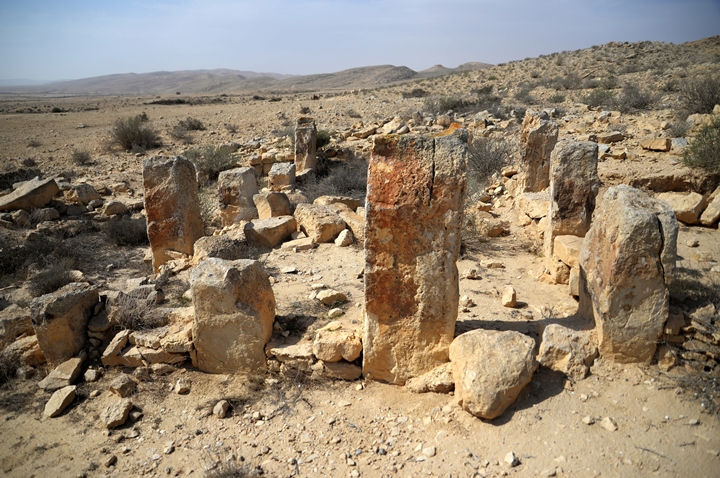 The next photo is a view towards the valley in the south.

In the far background is a modern desert inn – “Zayit Hamidbar” (“Desert Olive” farm). It has cabins and Indian tents for accommodations, where you can stay and experience the desert in style. 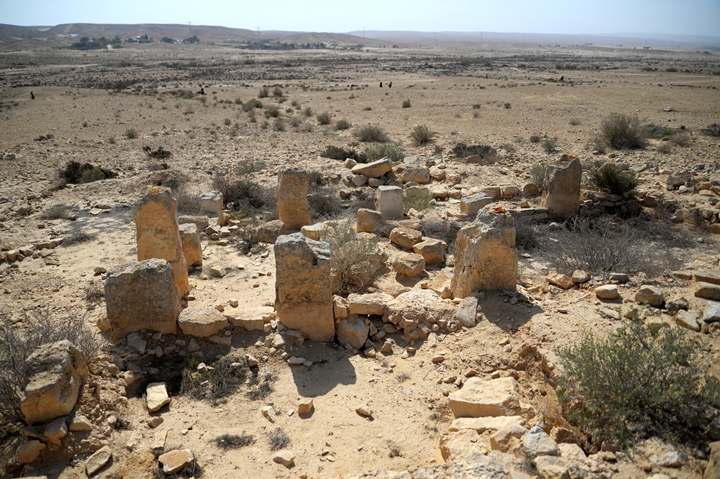 Behind the settlement are remains of a small Iron Age II (Israelite period) fortress. It was built during the 11th or 10th century BC, and was in use for a short period.

Here too, the ceramics were typical of the 10th century BC. They were found in a layer of ash, as the fortress was probably burnt. 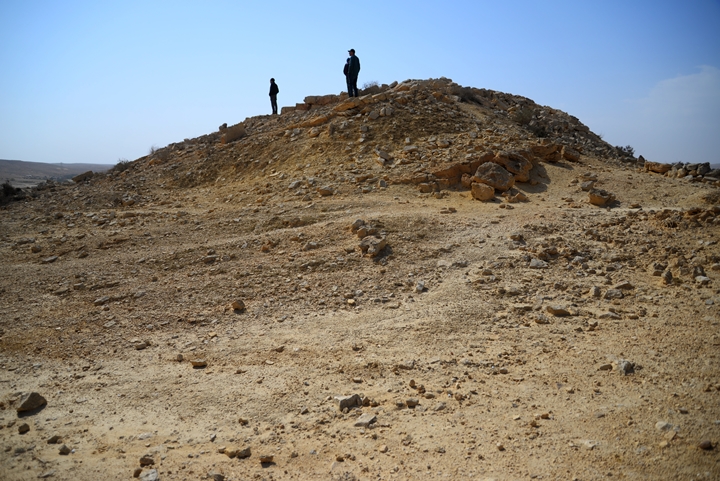 The fortress overlooks the valley and the important trade route that passed along Nahal Boker.

On its north and west foothills are cisterns that supplied water. 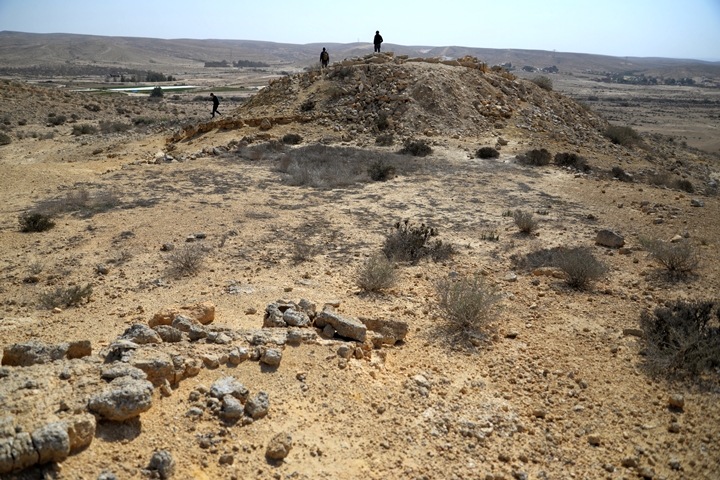 The fortress was built on a natural hill and was planned according to its shape. It covers an irregular area, in a form of a triangle pointed towards North-North-West. The western edge is 31m long, the eastern 33m, and the southern edge is 28m long where the entrance was located.

On the northern corner was a structure, built in a second phase, oriented with a shift to the northwest. 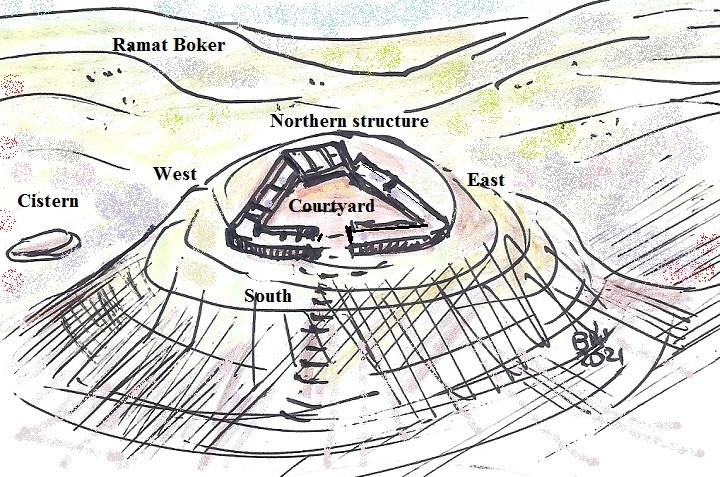 The plan of the fort is a large central courtyard (15m by 20m) surrounded by casemate rooms (chambers built along the peripheral walls). 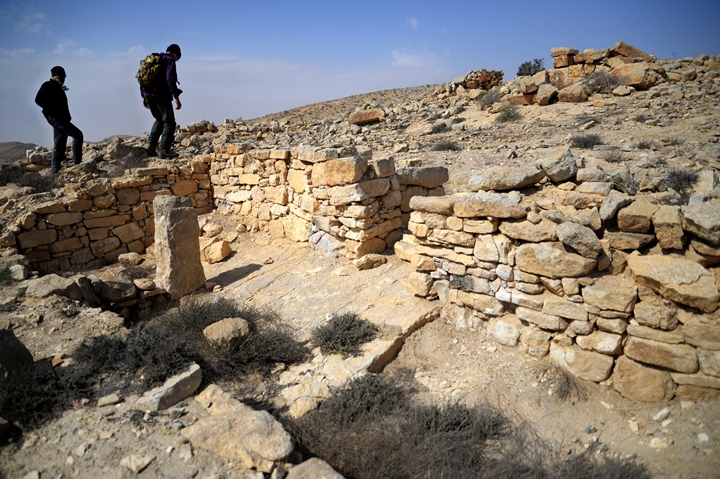 The entrance to the fortress is from the southern (valley) side. 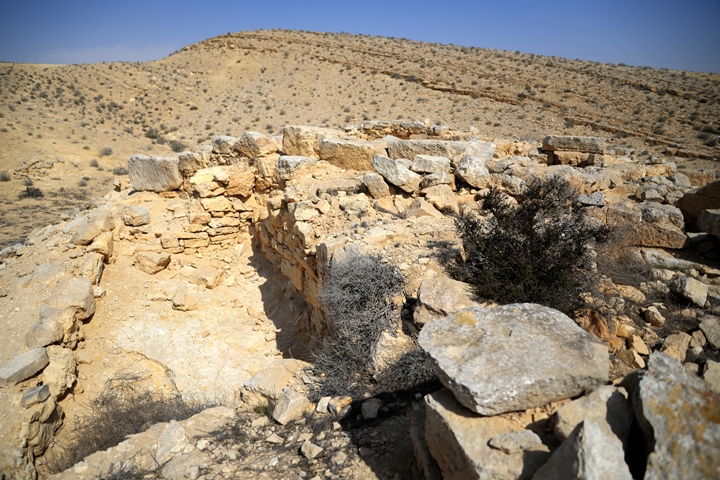 On both sides of the 4m wide entrance are two long casemate rooms – 3m x 10m on its east side (seen here) and 2m x 6m on the west side. 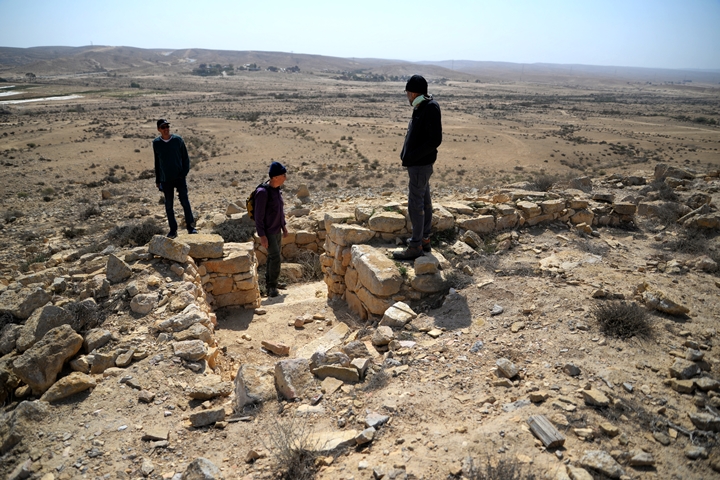 Along the western edge of the fortress are 4 casemate rooms. 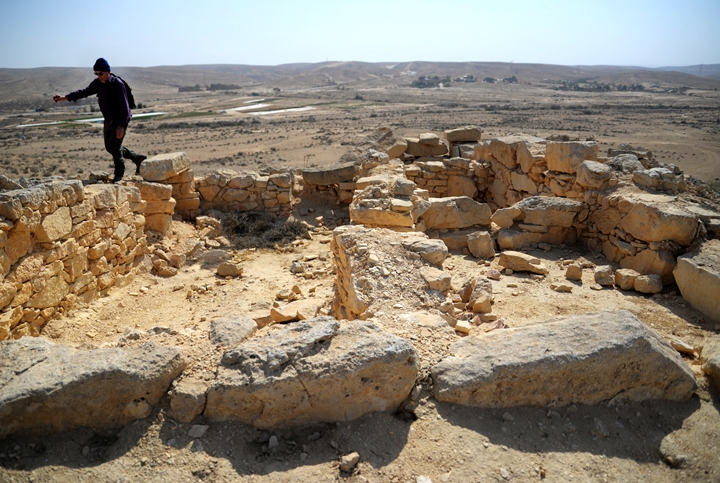 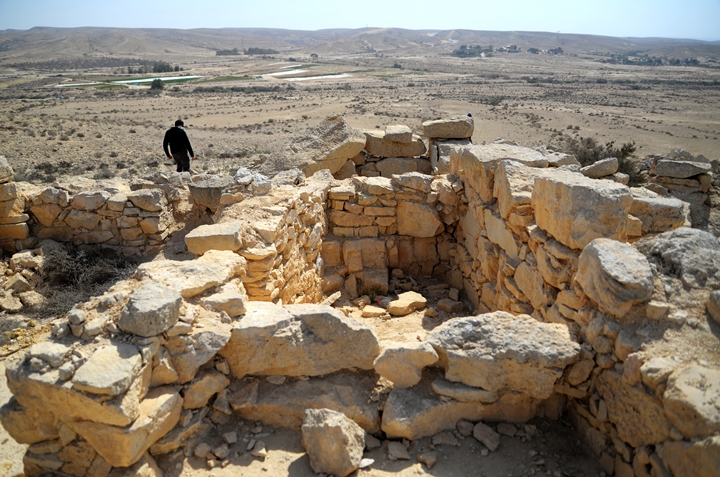 Along the eastern edge is a single long casemate room, 6m by 2m. 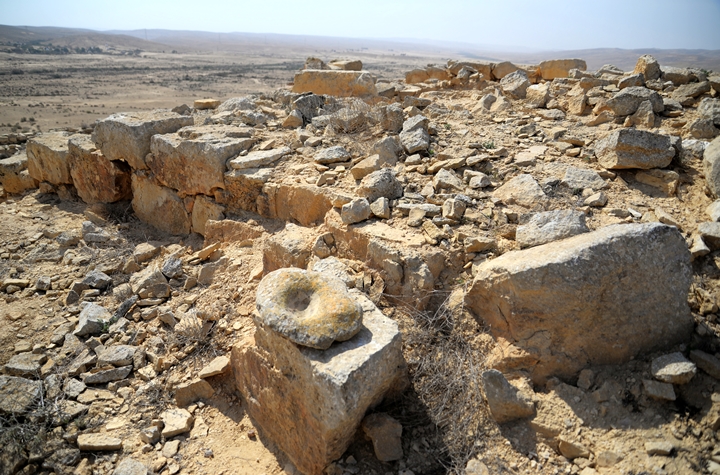 Another structure, built at a later phase, was located on the north side of the fortress. The structure measures 8m by 9m, and is oriented towards the north-west.

The structure consists of a central courtyard (2.5m x 6.5m) surrounded by 3 areas. 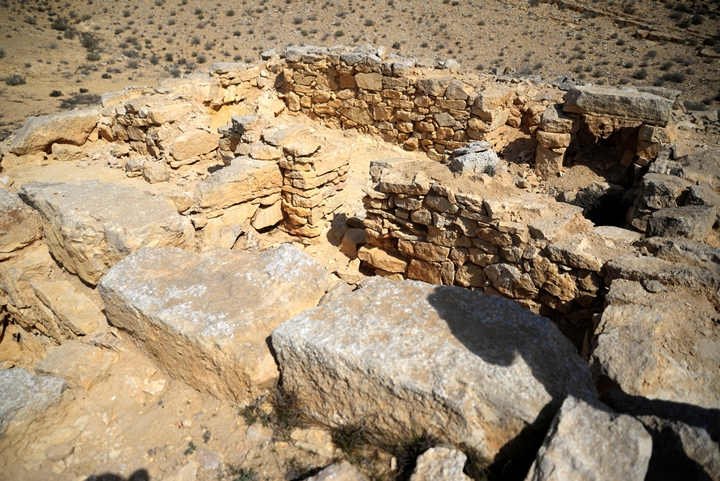 Ceramics collected on the site were dated to the Israelite Iron Age II period. There were 2 types of pottery that were identified  – Israelite ceramics and Negev types. 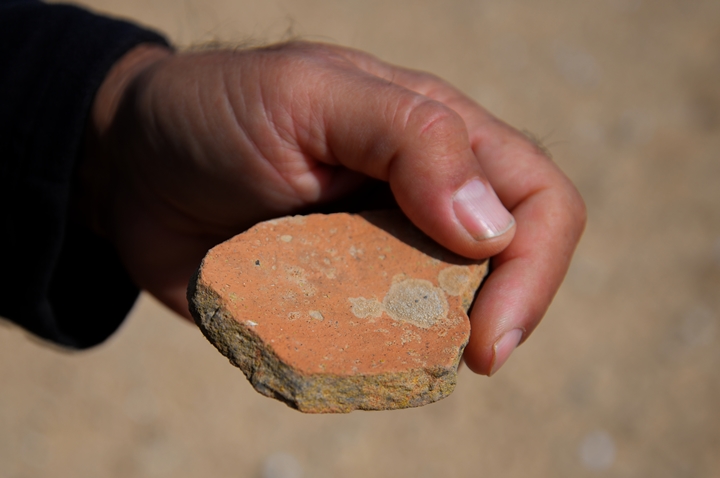 Another Iron Age IIa period fortress – Horvat Ritma – is located on the southern side of the valley, 1.2km to the south.