Ruins of  a Byzantine complex of cold and warm therapeutic powers springs in the Israeli controlled side of the Yarmuk river.  A popular modern complex was built nearby.

Hammat Gader is a Roman/Byzantine Thermae complex, and a modern therapeutic and resort center on the north bank of the Yarmuk river.  The site was a resort suburb of the great Hellenistic and Roman city of Gader (Gadara), a major Hellenistic/Roman/Byzantine city on the road from the Sea of Galilee towards the east.

Hammat Gader is located on the banks of the Yarmuk river, between the Golan heights (on the north) and Gilad mountains (on the south). The valley is about 500M wide, 150M under sea level, and 50M above sea of Galilee.  Hammat Gader area is 570 Dunam (57 Hectares). Its geological structure and volcanic history produced the hot and mineral springs that made the site so special.

In the area there are 5  springs, one cold mineral spring and 4 hot springs, ranging from 52 degrees C and down to 28 C (used for the fish ponds).

In the greater area of the sea of Galilee basin there are several more warm springs: Hammat-Tveria (south of Tiberias), also known for its ancient and modern times therapeutic and resort center, and the area of Tabcha (on the north side), near Capernaum which is named after the hot springs).

The following photo shows an aerial map of Hammat Gader. The Yarmuk river marks the border between the Jordanian area (on the lower/southern side) and the Israeli area (upper-northern side). 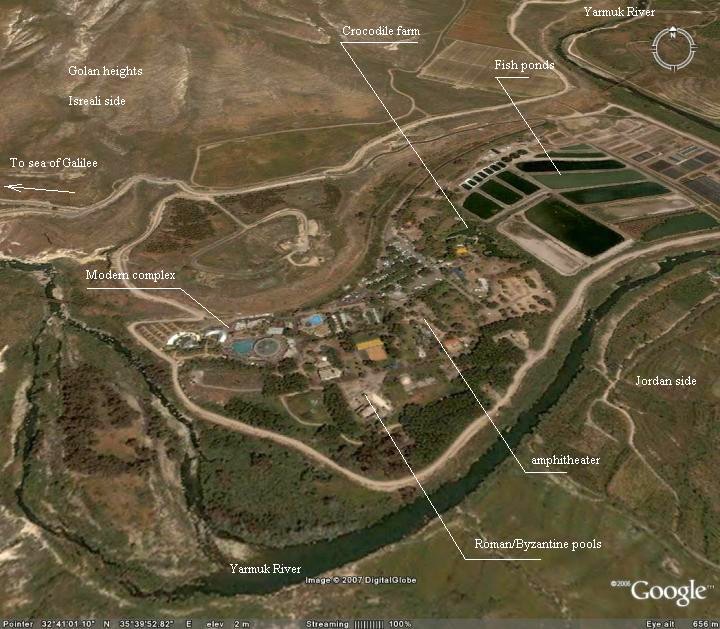 The Hellenistic/Roman city of Gader (Gadara) is located on the slopes of the Gilad, 4KM from Hammat Gader. It was a large and important city, located on the strategic road from the sea of Galilee basin eastwards. Today it is located in Jordan and called Um-Qeis.

In the Roman period it was part of the Decapolis, a union of 10 cities – which included Gerasa (Jerash), Beth-Shean (Scythopolis), Sussita (Hippos), Pella (east of Irbid), Philadelphia (Amman), Dion, Canatha,  Raphana and Damascus.

The Decapolis union is referred in the New testament in some of Jesus travels and acts (Mk 5: 20: “And he departed, and began to publish in Decapolis how great things Jesus had done for him: and all men did marvel”).

There are also references of  “country of the Gadarenes” (Mk 5: 1), which may refer to the larger region of Gadara.

Josephus Flavius refers several times to the city of Gader, but not to Hammat-Gader.

The area was first populated in the early bronze period (2nd Millenium BC), as found in small Tell Bani, on the western side. It is not mentioned in the old testament.

During the Hellenistic period the site expanded. The main city, Gader (Gadara), was established as a major Hellenistic city (Polis) in the 4th century BC, initially (320BC) under the Egyptian Hellenistic Thalami rulers who had the upper hand in the wars of Alexander’s heritance. Gader was captured by the Syrian Seleucids (Antiochus III) in 218 BC. Gader and the area was captured by the Jewish Hasmonean King Alexander Jannaeus (Yannai)  in 101 BC, after 10 months siege.

In 63 BC the area was taken by the Roman General Pompeius who made it into a Roman province. It was added to King Herod’s area in 30 BC, which expanded the Jewish population in the area.

The Roman site was first built in the 2nd century AD by the Roman Legion X soldiers who were located in the nearby Gader city.  They built the baths and amphitheater, and made it the second largest thermal complex in the Roman empire. The baths were used for over 500 years. This is a monumental structure, with a branched network of tunnels, channels and pipes that let in warm and cold spring waters and drain the pools. The pools are arranged in several interconnected halls. In the complex there were dozens of inscriptions that identified these different periods.

A Jewish Synagogue was built in the Byzantine period, around the end of the 4th century AD, on the mound of Hammat Gader. The site was a popular bathing site for the Jews who dominated the area, and they were even allowed to bath on a Sabbath.  The synagogue is a typical rectangular 13M long, double row structure, North-south orientation. Its style is similar to the Capernaum synagogue. Parts of the magnificent mosaics, which covered the whole floor, were reconstructed in the excavations in 1932. One section  illustrates a pair of lions and pine trees, and a round inscription. The other sections were geometric shapes. There were 4 more Aramaic inscriptions of the donators in the other parts of the floor.

East to Hammat Gader is the place of two crucial battles in the Holy Land – fought in the Yarmuk valley. The Arabs battled against the Byzantine armies in two battles – the 1st Yarmuk battle (634 AD) and the 2nd Yarmuk battle (August 20, 636). The 2nd battle was an important milestone – it signaled the end of the Roman/Byzantine presence of 560 years.

The site was  destroyed after the Arab conquest. Many years later it was rebuilt and the town was named El-Khama.

Hammat Gader was part of the Israeli territorial rights in 1948, but was seized illegally by the Syrians who used it as a resort for their officers and soldiers. It was liberated in 1967, following the  six-day-war.

In 1969 the Israeli site was hit by a terrorists and closed. In 1977 the site was reopened to the public, after investment by 4 Kibbutzim in the area. Since the site is on the border, although quite, there is a permanent guard here.  In 1993 the site was renovated with the finance of the owners and additional UN-Iraq compensation funds. In the area there is also a small zoo with parrots and snakes and a large crocodile farm,  making the site more appealing to children who care less about therapeutic powers. All in all, this site is unique and combines health, history and attractions.

Photos of the Roman/Byzantine baths:

This is the view of the archway, the entrance to the Roman/Byzantine baths and the Hall of pillars . 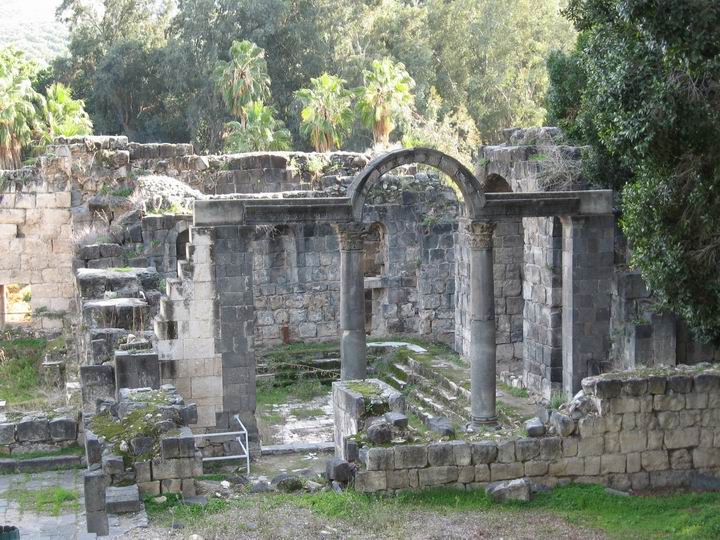 Hall of pillars – the first pool beyond the entrance. 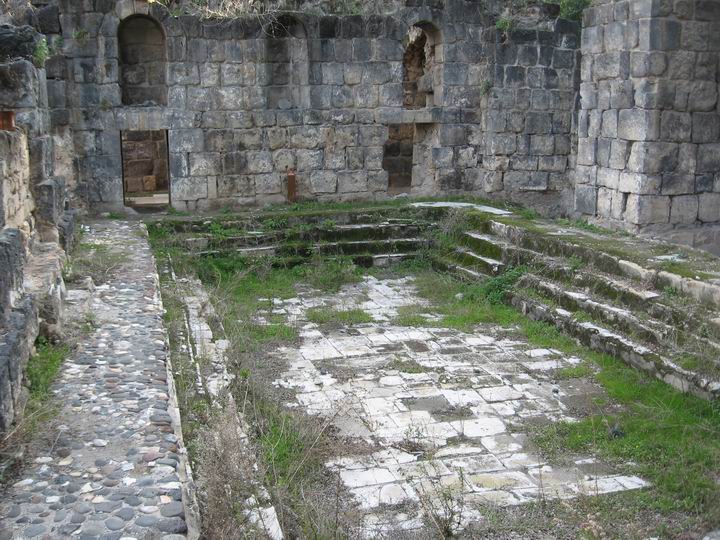 The fountain hall is the largest cold water pool – 53.5M length. Around it are 32 marble stone fountains, shaped as human or anthropomorphic heads with the water gushing out of their mouths. 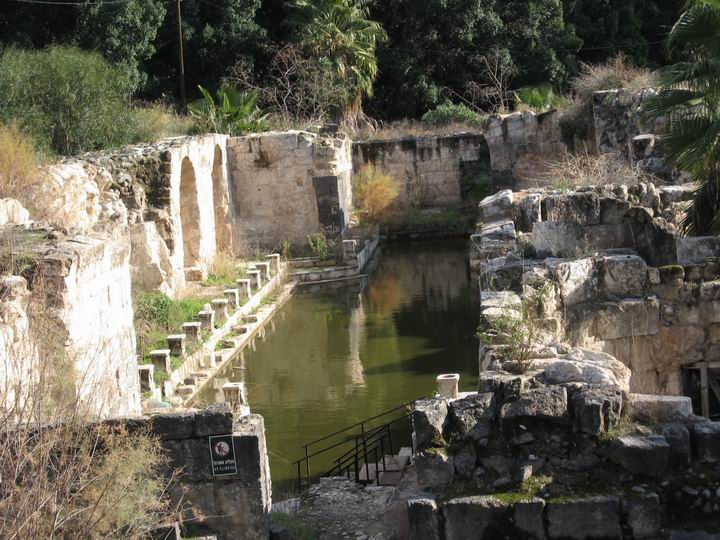 One of the pools was reserved for lepers. The water supply and drainage was separated from the other pools. They bathed at night, as testified by the many oil lamps found in the excavations. 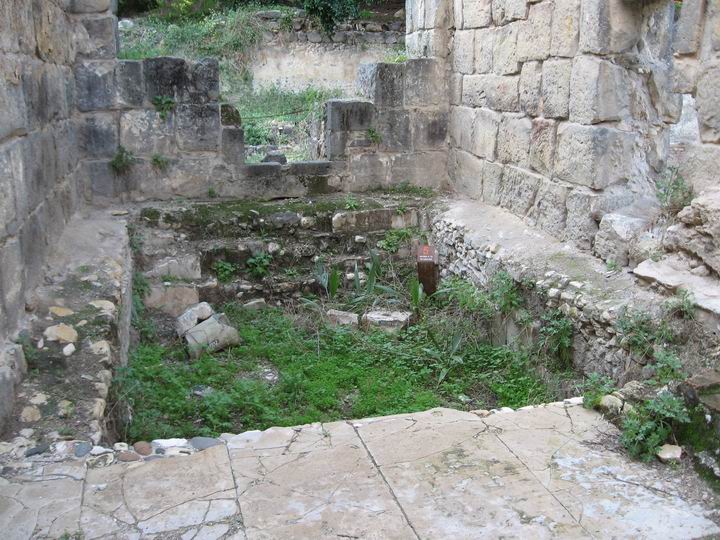 View of the hall of the well’s spring, where the hot water enters into the complex. 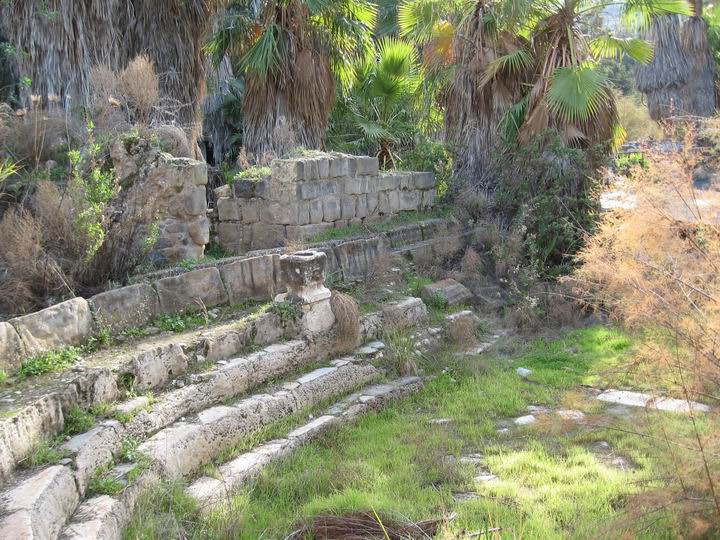 A view from the cold water pool towards the North and the Mosque’s tower. 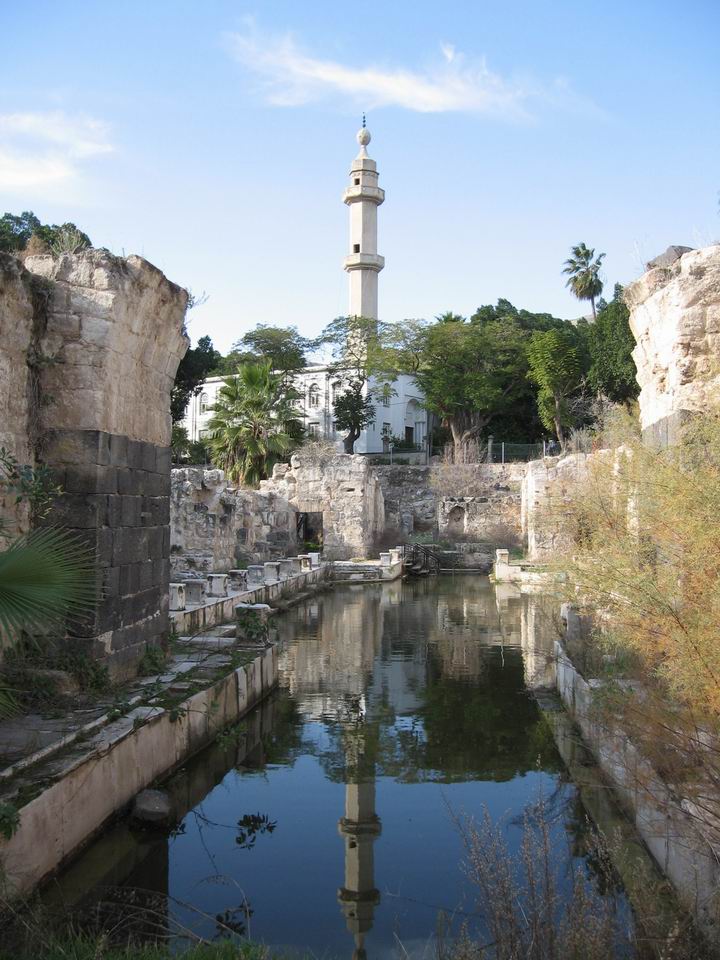 You can see a short video clip on the Byzantine baths complex by clicking here (8MB). It shows the site from the north side. The entrance is seen on the right, and the large pool on the left.

Photos of the Amphitheater:

North-east to the ancient pools is a steep hill. In its north-east side is a small 3rd century AD Roman amphitheater. There were two thousand basalt stone seats, organized in 15 round rows, around a platform and orchestra (30.6M). Only parts of the amphitheater was excavated. 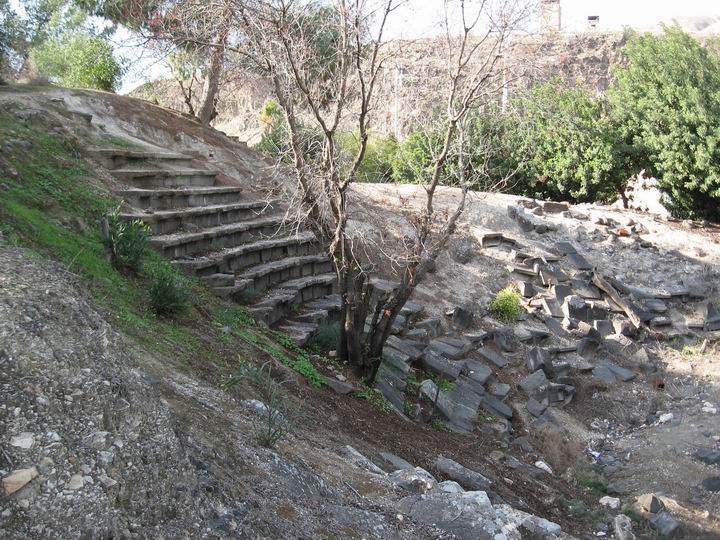 Two of the better seats in the theater are shown in the following photo. Their design is similar to the amphitheater that is located in the main city, Gader (Gadara), 4KM east on the Jordanian side. 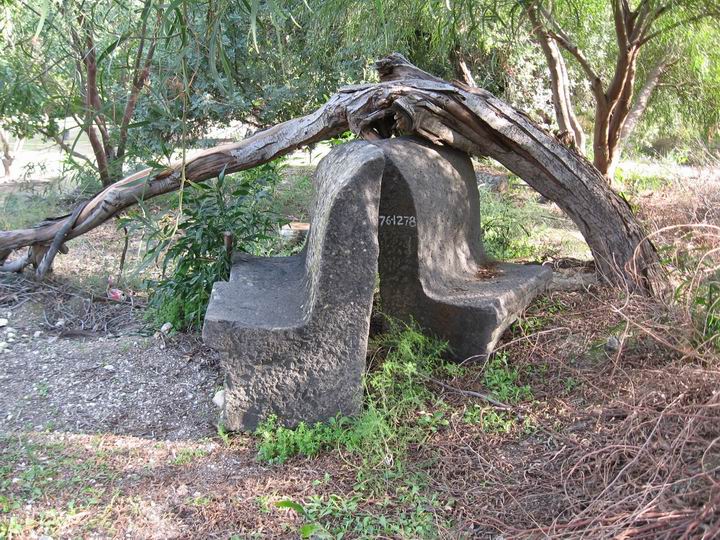 North to the ancient site is the large, modern Spa complex, which has been renovated in recent years. Its source of warm water is from the Balsam spring – 42 Degrees Celsius, 4.7% sulfur, and rich of other minerals. It consists of a covered public pool, seen on the left side, a large open pool seen in the center of the photo, a closed spa and hotel section  (on the right side, but not seen in the photo), and the source of the hot springs (on the left side, but not seen in the photo). Additional showers, lockers, and two restaurants (Thai and Middle-eastern) provide service to the visitors. The visit here is recommended for the winter time, and is a remarkable therapeutic site which pumps energy and relaxation into the soul and body. 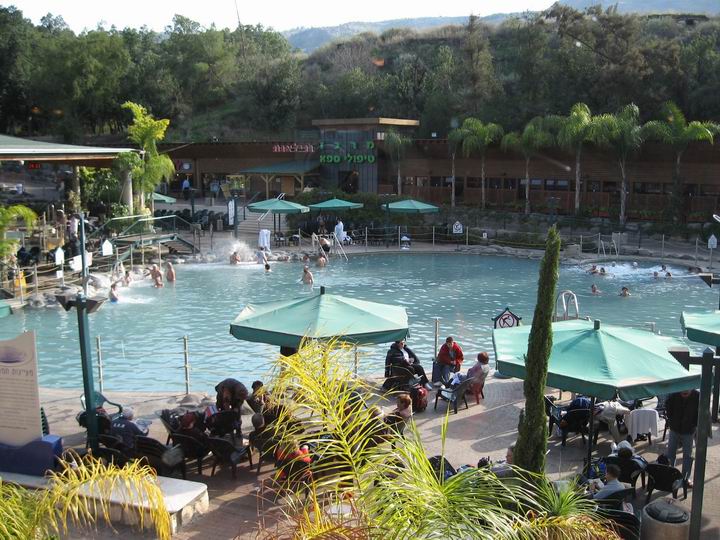