Ruins of  a Roman/Byzantine  town, located above the north side of sea of Galilee, and is referred in the new testament as one of the cities condemned by Jesus.

Ruins of  a Roman/Byzantine  town, located above the north side of sea of Galilee, and is referred in the new testament as one of the cities condemned by Jesus.  The buildings are made of black basalt stones, and a grand 4th century AD synagogue was restored in the central quarter.

Matthew 11 21-22: “Then began he to upbraid the cities wherein most of his mighty works were done, because they repented not: Woe unto thee, Chorazin!…”

The site is located 4.5KM north to the sea of Galilee, 300M above the level of the lake. It can be approached either from the west (2KM from Vered-Hagalil junction) or the east (the road that climbs up from the Sea of Galilee to  Almagor,  3Km away from the Moshav).

The city was established in the 1st century AD. The remains that are seen today belong to a later period, the period of the Mishna and Talmud (3rd/4th century AD), when the city was expanded.

The Jewish Synagogue was built in the Byzantine period, in the 3rd/4th century AD, according to a hoard of coins found under the synagogue. The synagogue is a typical rectangular 23M long, 17M wide, double row structure, north-south orientation. Its style is similar to the Capernaum and Hammat-Gader synagogues.

The site was  destroyed at the middle of the 4th century, as described by Eusebius of Caesarea (published in his work – Onomasticon – at about 370 AD), which relates the destruction of the city to the prophecy of Jesus. This was also established by the excavations. The destruction may have been caused by an earthquake (363 AD).

The site was restored at the end of the 4th century, and continued until the 8th century.  It expanded during the early Arabic period (7-8th century AD). After a gap of several hundred years, was revived in the 13th century. Near the entrance there is a tomb from the Mamluk period – the grave of Sheik Ramadan.

A small population was settled here from the 15th century until the last century. Bedouins from Syria that were settled in the ruins by the British after WW1 until 1948 when the site was abandoned.

New sites were established in the vicinity of Korazim: In 1946 Kibbutz Amiad; In 1961 Moshav Almagor and the farm Vered-Hagalil; In 1983:  Chorazin, which shares the same name as the ancient site.

The ruins of the town cover about 100 Dunam (10 Hectares), and is located on a ridge that is divided by the road to Moshav Almagor. The city has five quarters (north, west, south, east and central), where the central quarter includes the public houses and the synagogue.  The town was not protected by a wall.

A quad copter view, taken above the east side of the site, is seen here. 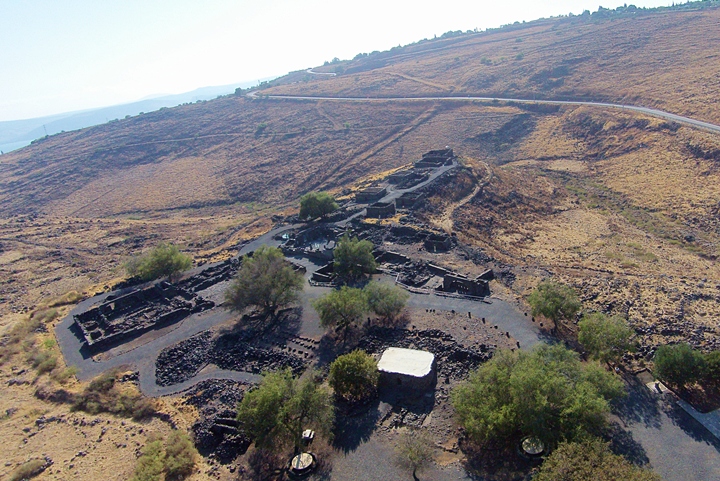 This area is very dry, and water supply was essential for sustaining the life in this town. A spring is located on the north-east side, which was the source of the city’s water, in addition to the cisterns under the houses.

The city is located above the sea of Galilee, and an ancient road connected it to Capernaum (Kefar Nahum) below. It was an agriculture village, and famous for its wheat. An oil press was found on the western side of the city near the ancient road on the edge of the city. 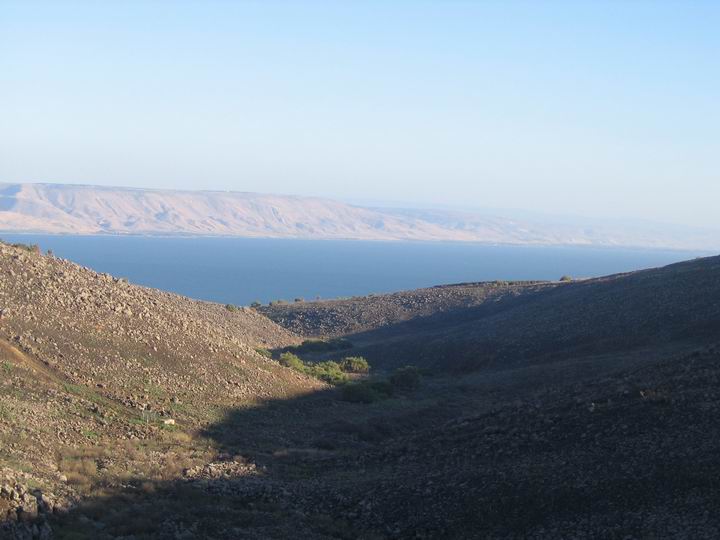 Korazim is built from black basalt stones, the local stones in this volcanic area. Most of the stones are unhewn (rough and unfinished).

The ritual bath, an underground Mikveh, is located in the central quarter, north to the synagogue. It is based on a set of long stones that are placed over a cavity, as seen in the center (a similar structure can be seen near the ancient synagogue in Khirbet Kanaf). A cistern is located behind the bath (covered by an iron cover). 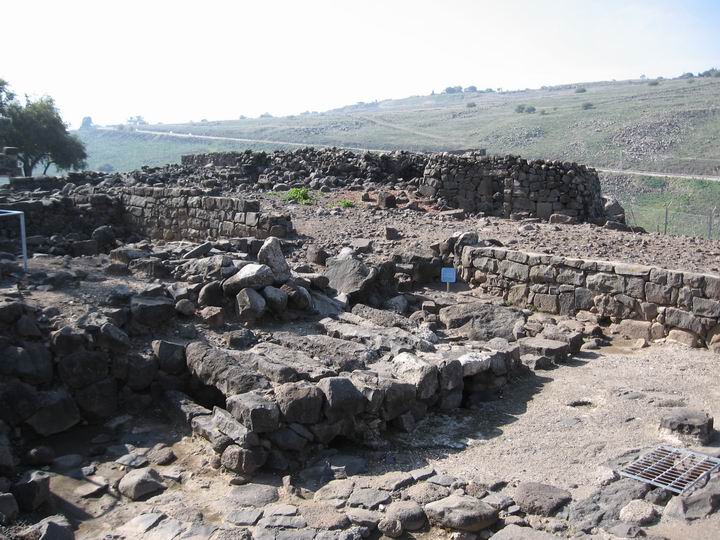 The structure next to the ritual bath, which includes arches. 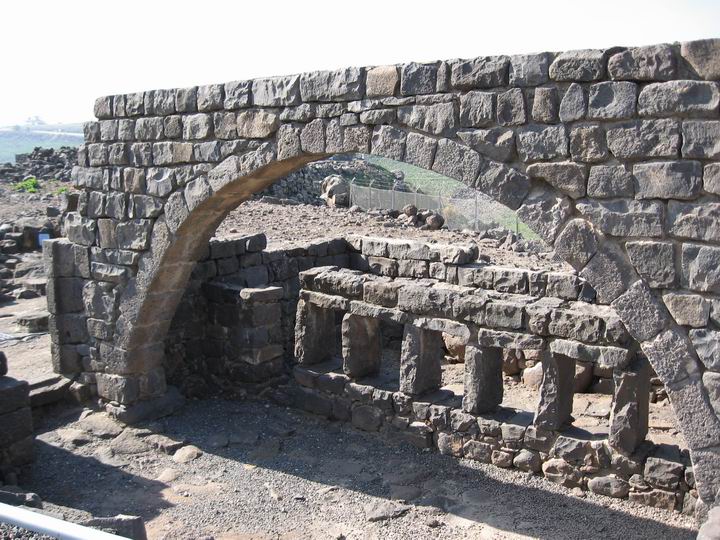 In the following photo – some of the houses in the central quarter. In front of them – the main street of the city (North-South, which is right and left). There are narrow lanes between the houses, and most of the houses are adjacent to one another. On the left background is the synagogue. 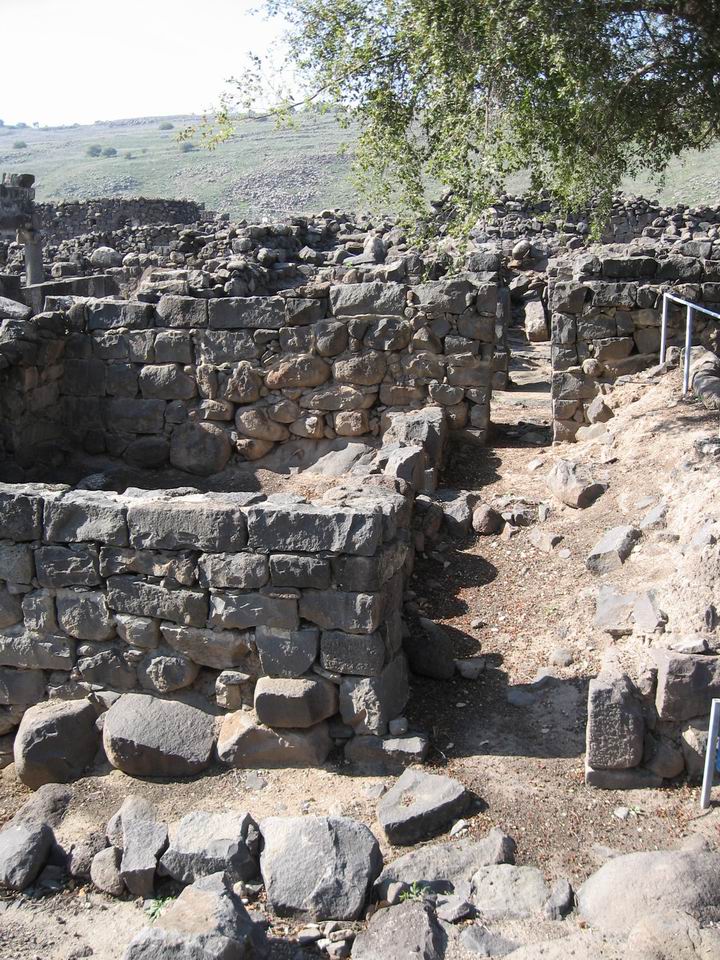 The 4th century AD synagogue was a classic Galilee type rectangular structure, made from black basalt stones, and built on a raised platform. It is one of the  earlier Galilee  synagogues.

This is the view of the south entrance and the outer court. It was accessed from the main street by a staircase, and there were 3 doors (the restored structure shows only the side door on the left and the central door on the right). A part of the decorated top of the door is seen on the floor. 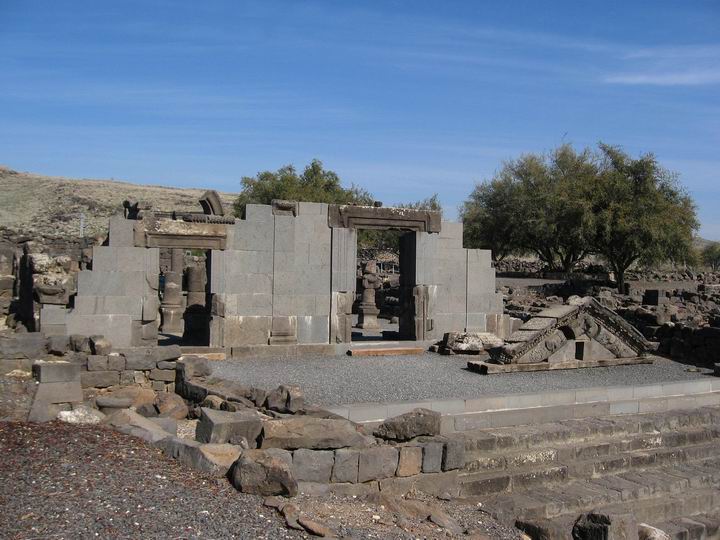 The entrance to the Synagogue was decorated, and the reconstructed gable is located on the floor of the  outer court and shown below.

A close up on the south-west side of the synagogue. The doors face the south – the direction of Jerusalem. The structure was damaged in the 4th century by an earthquake, and later restored and used until the 8th century AD. 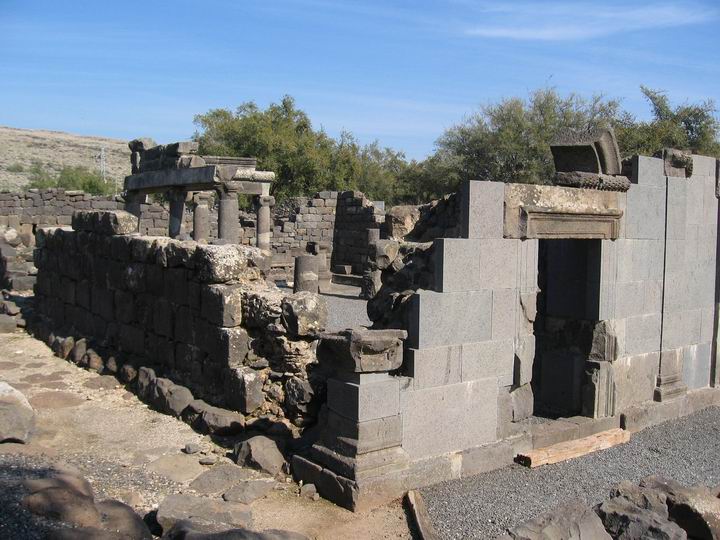 The inner north side of the synagogue shows 5 of the columns out of the 12, which were arranged as a U shape. They supported the ceiling and roof, with windows on the sides. The floor was paved without mosaics, unlike  other Galilee Synagogues from later periods. 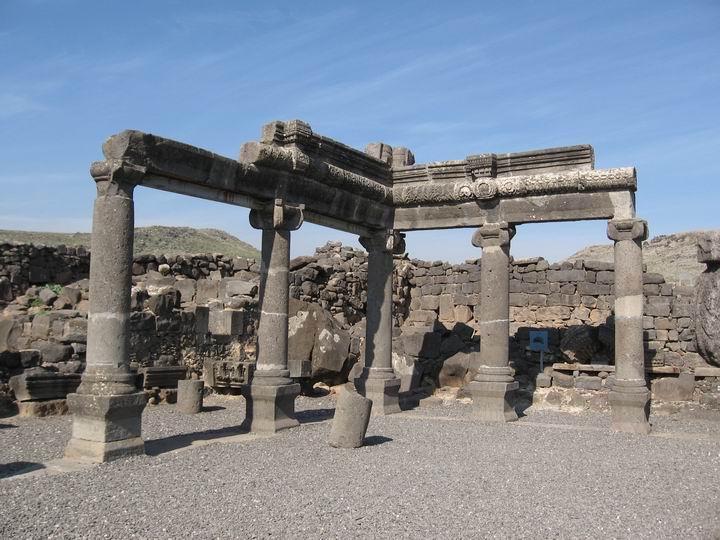 A stone bench known, as the “Cathedra of Moses” type, is seen in the following photo (the original stone is displayed in the Jerusalem Museum). Its inscriptions, in 4 Hebrew lines, dedicate the bench to the memory of Yuden Bar Ishmael.  The Hebrew words can be seen clearly starting with “remembered for good…”, right to left, on the top-right corner. 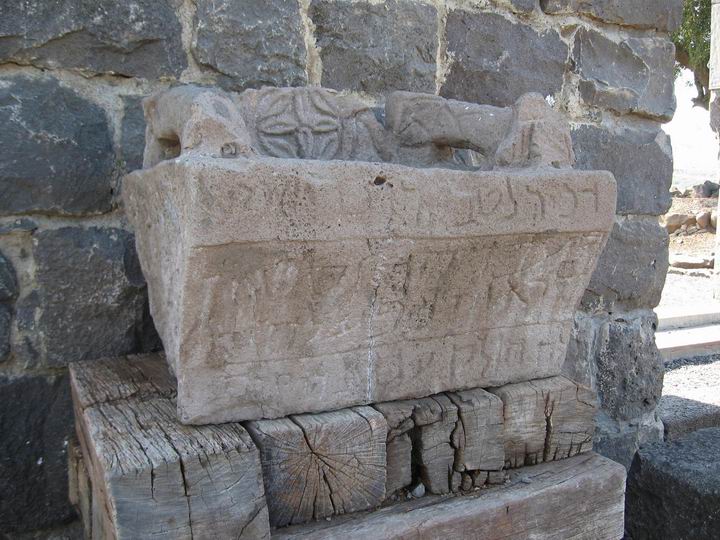 Many artifacts were found in the synagogue, some shown in these photos. There are stones with lions, birds, grape vines, head of medusa, menorah, temple, and more. 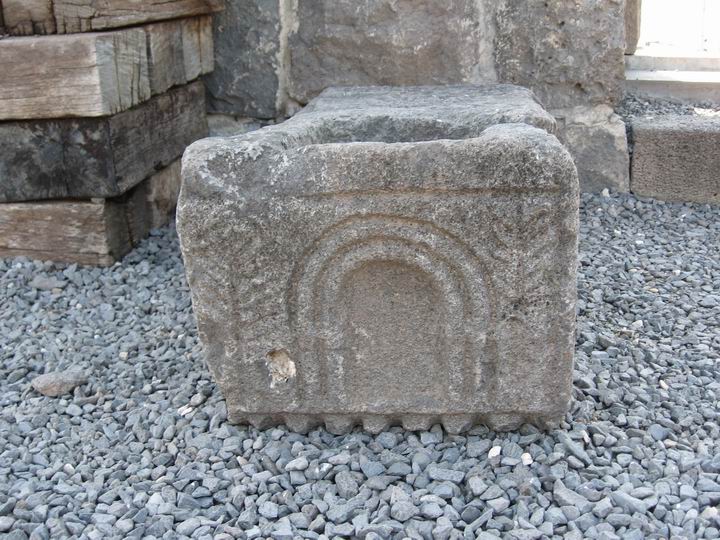 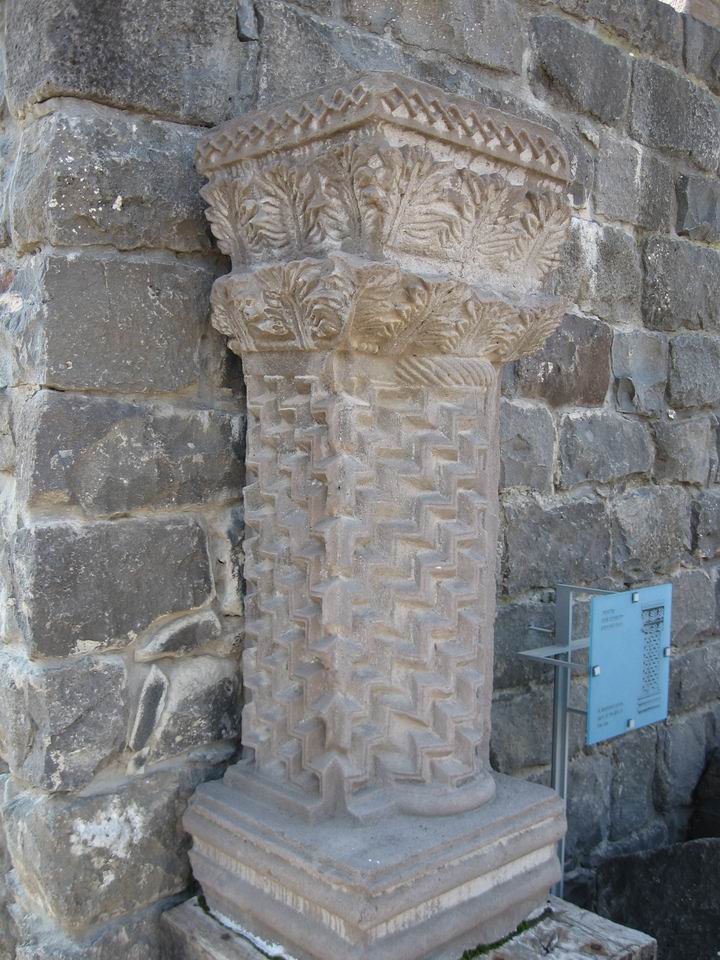 There are two identical references to Kurazim (Chorazin) in the new testament, associated with the cities that did not accept Jesus and were condemned by him.

“Then began he to upbraid the cities wherein most of his mighty works were done, because they repented not:
Woe unto thee, Chorazin! woe unto thee, Bethsaida! for if the mighty works, which were done in you, had been done in Tyre and Sidon, they would have repented long ago in sackcloth and ashes”.

“But into whatsoever city ye enter, and they receive you not, go your ways out into the streets of the same, and say, Even the very dust of your city, which cleaveth on us, we do wipe off against you: notwithstanding be ye sure of this, that the kingdom of God is come nigh unto you. But I say unto you, that it shall be more tolerable in that day for Sodom, than for that city. Woe unto thee, Chorazin! woe unto thee, Bethsaida! for if the mighty works had been done in Tyre and Sidon, which have been done in you, they had a great while ago repented, sitting in sackcloth and ashes”.

This 7th century AD work holds a tradition that Antichrist would be born at Chorazin, educated at Bethsaida and rule at Capernaum – hence the curse of Jesus upon these cities as in the above texts.