Isaiah 5:2: “And he fenced it, and gathered out the stones thereof, and planted it with the choicest vine, and built a tower in the midst of it, and also made a winepress therein: and he looked that it should bring forth grapes, and it brought forth wild grapes”.

Wine production was a popular industry in the Holy Land. In Emmaus (Nicopolis) there are several ancient installations, dated to the Roman/Byzantine period,  cut into the rock. These wine presses served the farmers in the vicinity of Emmaus.

The location of the winepresses are indicated on the aerial map below. 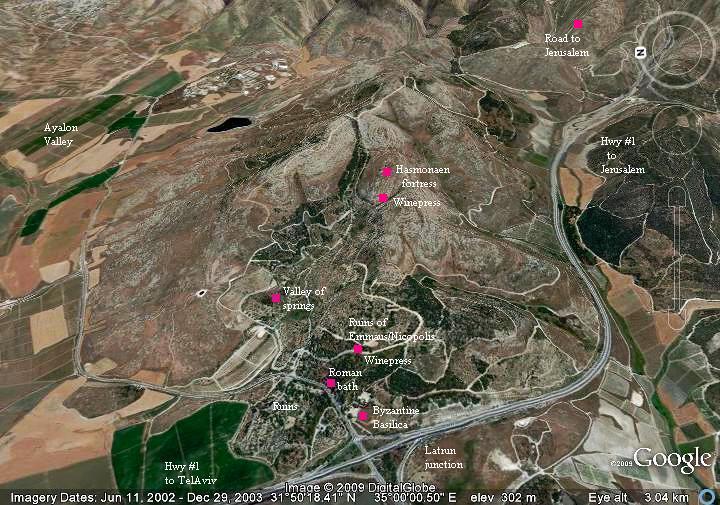 This grand winepress is located on a hill called the observation hill, located above the Roman bath.

The winepress is seen in the photo below, cut into the rock. It consists of a large treading (crushing) floor,  covered by mosaics (seen only on the upper left corner).  Behind it is an area where the grapes would have been stored – also on mosaic floors.

The grape juice with the grapes would then sit in the floor for fermentation (Yeshu Drey’s correction). 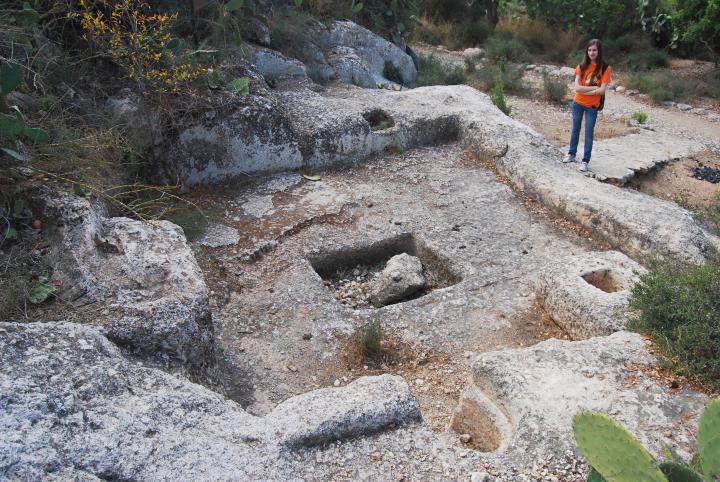 The juice would then be  collected into jars, then stored for subsequent fermentation. 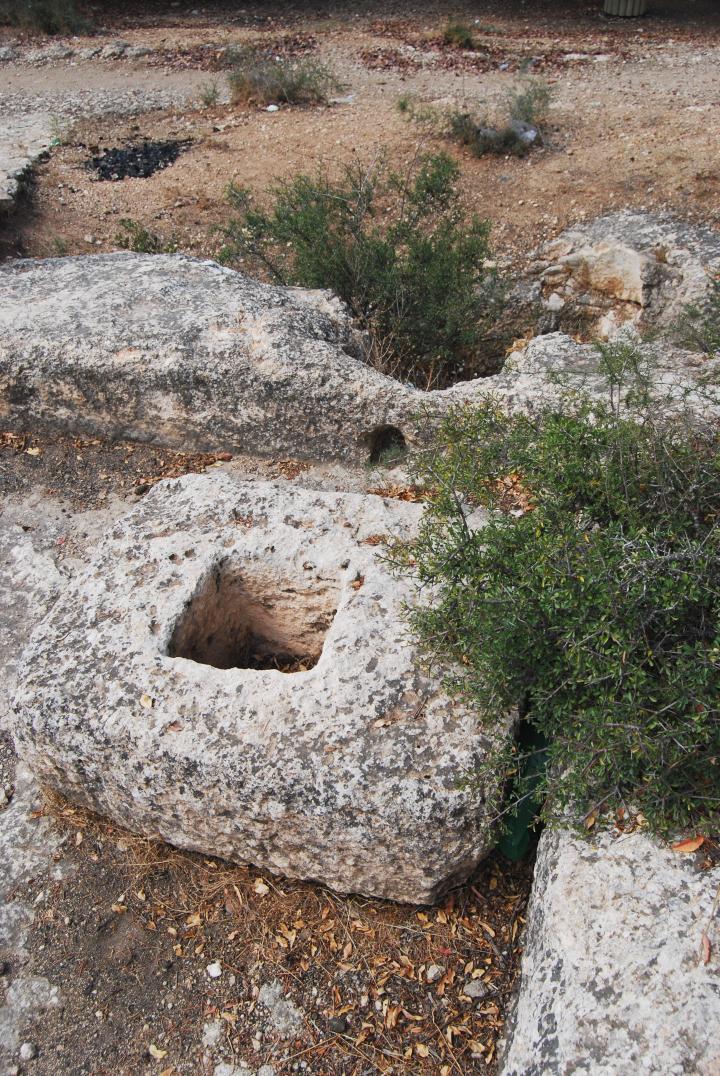 The hole in the center of the treading floor was used for secondary extraction of the juice, using a single fixed-screw press. The press squeezed out the must left in the grape skins and stalks after treading. (Thanks for Rafi Frankel for his correction).

The remains of the crushed grapes would have been collected into the hole. The crushing stone, seen on the left side, fits exactly into this hole, and was used to crush the trampled grapes once again in order to extract the lower quality grape juice. 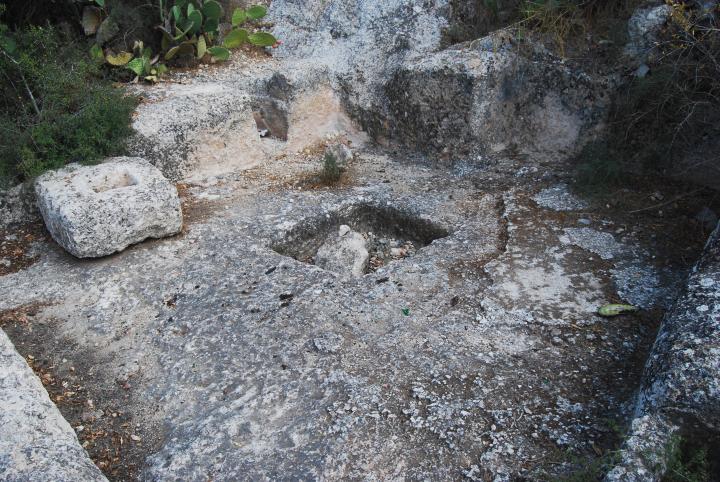 (b) Foothills of Hasmonean Fortress

This winepress is located near the park road, on the lower western foothills of the Hasmonean fortress. This installation is also cut into the local rock. 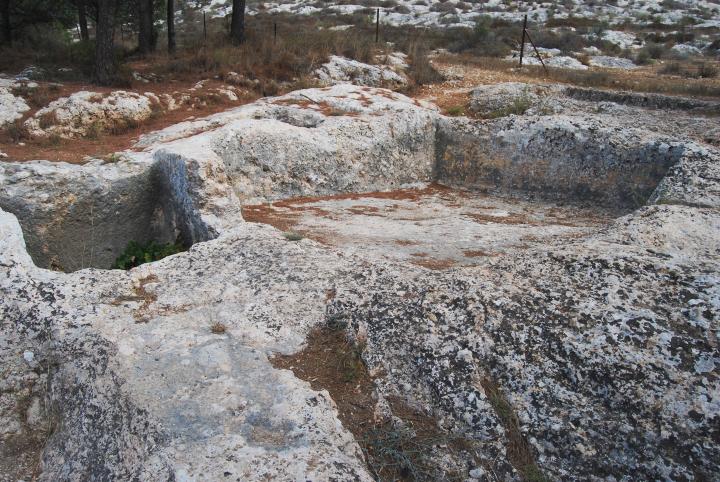 The grapes were placed on the large treading floor, and the workers would crush the grapes by foot. 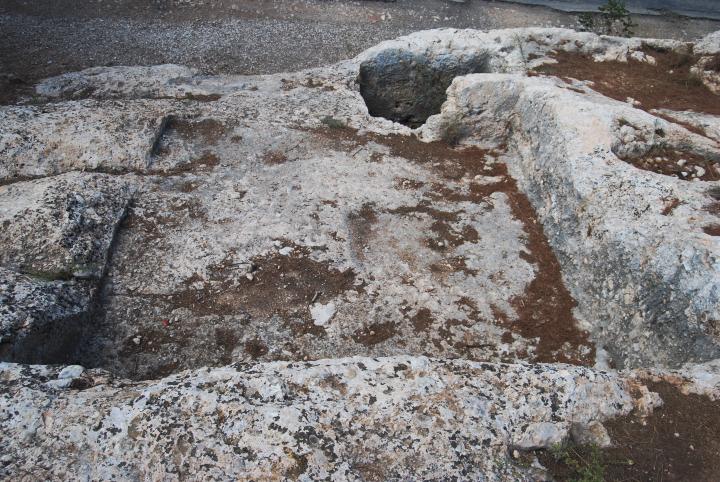 The juice would then pour down a groove into the tub, seen on the bottom left side. There it would be collected into jars. 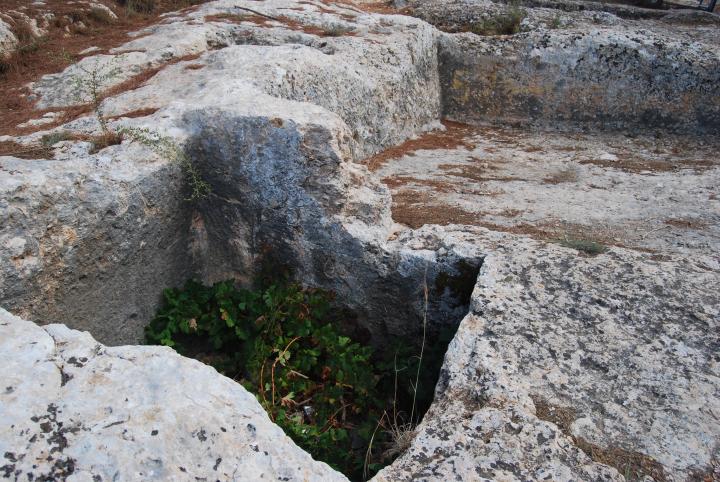 These are dozens of references to wine, and many others for winepresses. Wine making was one of the important industries in the Biblical times –

Num 18:27: “And this your heave offering shall be reckoned unto you, as though it were the corn of the threshingfloor, and as the fulness of the winepress“.

Judg 6:11: “And there came an angel of the LORD, and sat under an oak which was in Ophrah, that pertained unto Joash the Abiezrite: and his son Gideon threshed wheat by the winepress, to hide it from the Midianites”.

Judg 7:25: “And they took two princes of the Midianites, Oreb and Zeeb; and they slew Oreb upon the rock Oreb, and Zeeb they slew at the winepress of Zeeb, and pursued Midian, and brought the heads of Oreb and Zeeb to Gideon on the other side Jordan”.

2 Kings 6:27: “And he said, If the LORD do not help thee, whence shall I help thee? out of the barnfloor, or out of the winepress?”

Job 24:11: “Which make oil within their walls, and tread their winepresses, and suffer thirst”.

Is 5:2: “And he fenced it, and gathered out the stones thereof, and planted it with the choicest vine, and built a tower in the midst of it, and also made a winepress therein: and he looked that it should bring forth grapes, and it brought forth wild grapes”.

Is 63:3: “I have trodden the winepress alone; and of the people there was none with me: for I will tread them in mine anger, and trample them in my fury; and their blood shall be sprinkled upon my garments, and I will stain all my raiment”.

Jer 48:33: “And joy and gladness is taken from the plentiful field, and from the land of Moab, and I have caused wine to fail from the winepresses: none shall tread with shouting; their shouting shall be no shouting”.

Hos 9:2: “The floor and the winepress shall not feed them, and the new wine shall fail in her”.

Zech 14:10: “All the land shall be turned as a plain from Geba to Rimmon south of Jerusalem: and it shall be lifted up, and inhabited in her place, from Benjamin’s gate unto the place of the first gate, unto the corner gate, and from the tower of Hananeel unto the king’s winepresses“.

Mt 21:33: “Hear another parable: There was a certain householder, which planted a vineyard, and hedged it round about, and digged a winepress in it, and built a tower, and let it out to husbandmen, and went into a far country”

Rev 14:20: “And the winepress was trodden without the city, and blood came out of the winepress, even unto the horse bridles, by the space of a thousand and six hundred furlongs”.

Rev 19:15: “And out of his mouth goeth a sharp sword, that with it he should smite the nations: and he shall rule them with a rod of iron: and he treadeth the winepress of the fierceness and wrath of Almighty God”.

This page was last updated on April 29, 2017 (Yeshu Drey’s theory of fermentation)