The House of the Galilee (Domus Galilaeae) is a modern Christian meeting place for seminars and conventions. It is located on the peak of Mount of Beatitudes, above and north to Capernaum and the sea of Galilee.

The House of the Galilee (Domus Galilaeae) is a modern 21st century International Center meeting place, primarily used for Christian seminars and conventions.  It has a number of meeting rooms, praying halls, gardens and library. It is located on the peak of Mount of Beatitudes, above and north to Capernaum and the sea of Galilee. Its special architectural design, its arts, and the spirit of the place makes it a unique site and a recommended stop for travelers in the area.

Domus Galilaeae is located on the top of the mountain of Beatitudes. This hill is located above Tabcha and Capernaum on the north-west shore of the sea of Galilee, and is approached by a road that climbs up from Tabcha junction towards the Upper Galilee. That road snakes up the high 200M climb from the lake, passing by the Church at the Mount of Beatitudes, and at the first junction (Vered-Hagalil horse ranch)  a side road that turns eastwards towards Korazim. The Domus Galilaeae site is located just past the ranch, on the hillside that faces the lake.

The project started in the 1980s.  The corner stone for the center was laid on the barren hillside in 1999. The site was constructed in a short time, and opened in year 2000. It was inaugurated by the Pope John Paul II in his Millennium visit to the Holy Land. The Library was completed in 2005.

This is the view of the front side of the Domus Galilaeae. The main entrance is on the right side, behind the olive tree. 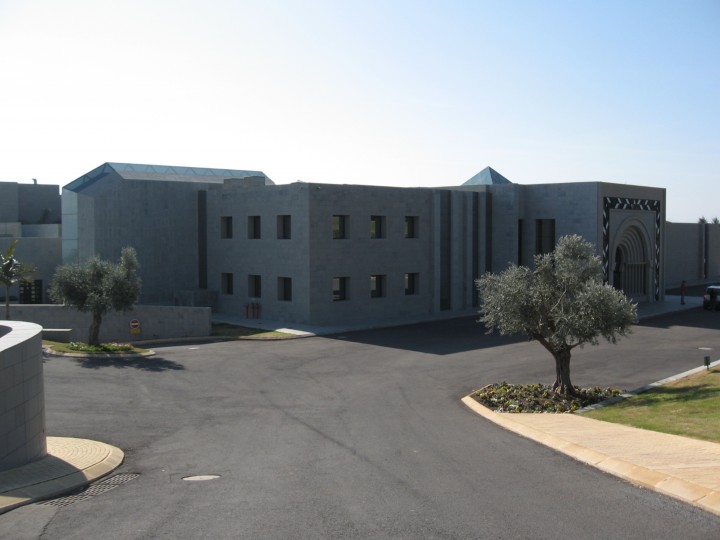 The site is overlooking the Sea of Galilee. This photo is taken from the road that climbs up from Capernaum to Korazim, another road that can be used to drive to the site. 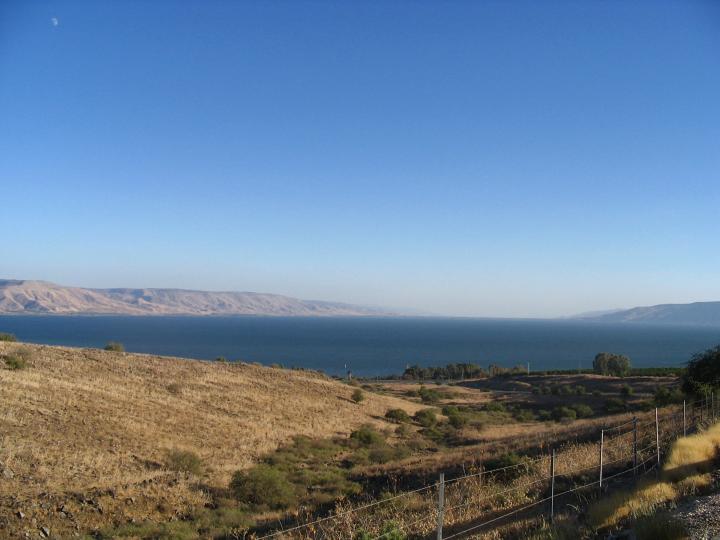 Inside the modern structure is an inner garden, and the sun light brightens up the center of the structure. The halls and rooms are located around this center. 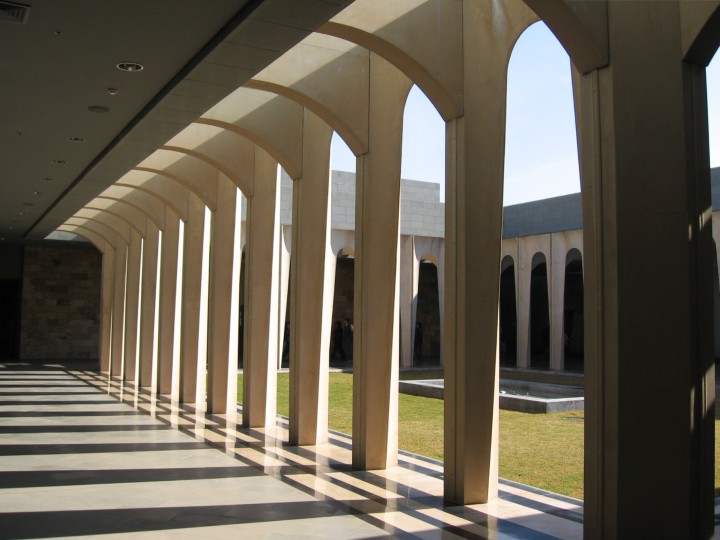 There are several meeting and prayer rooms in the structure. The following photos show some of the rooms. 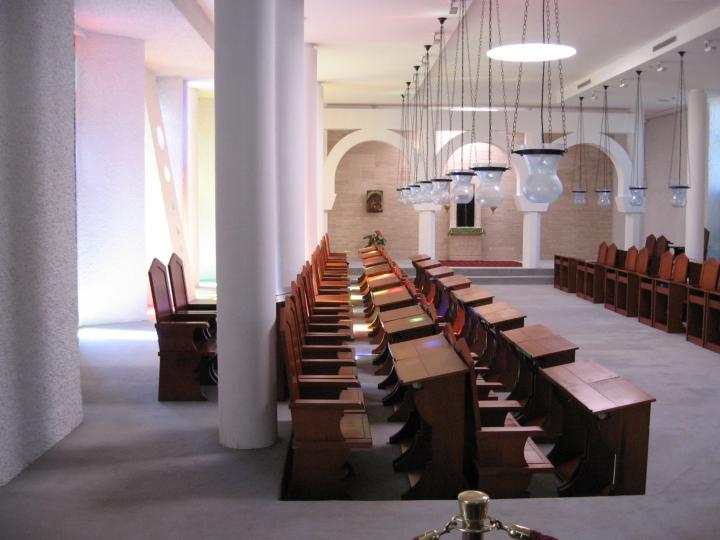 The podium in this room is seen in the photo below. 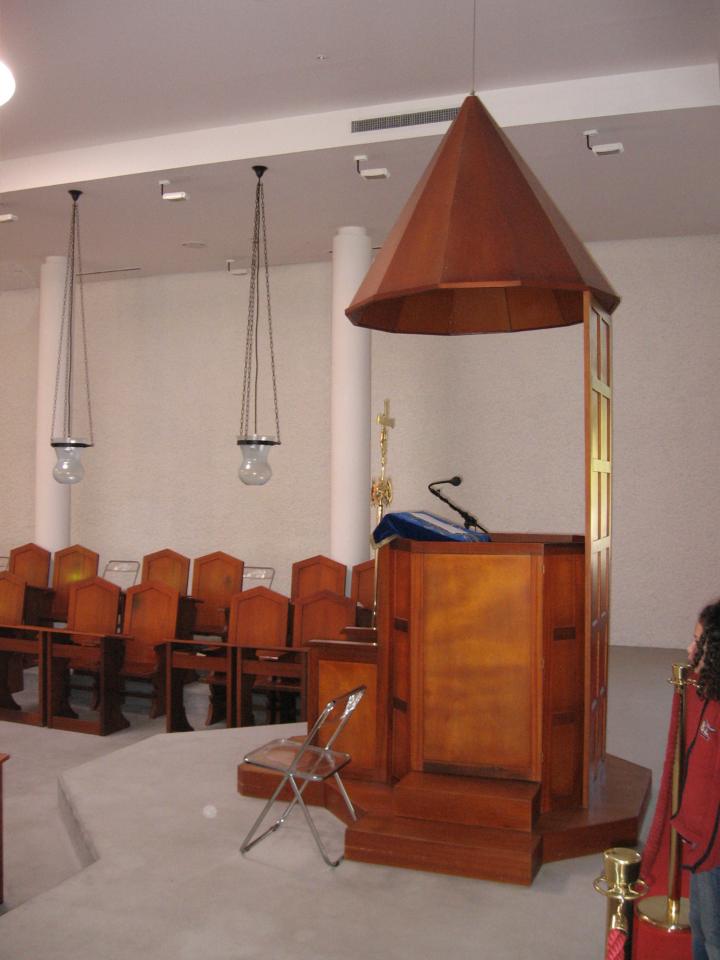 A small prayer room has special natural light effects, as shown in the following photos. 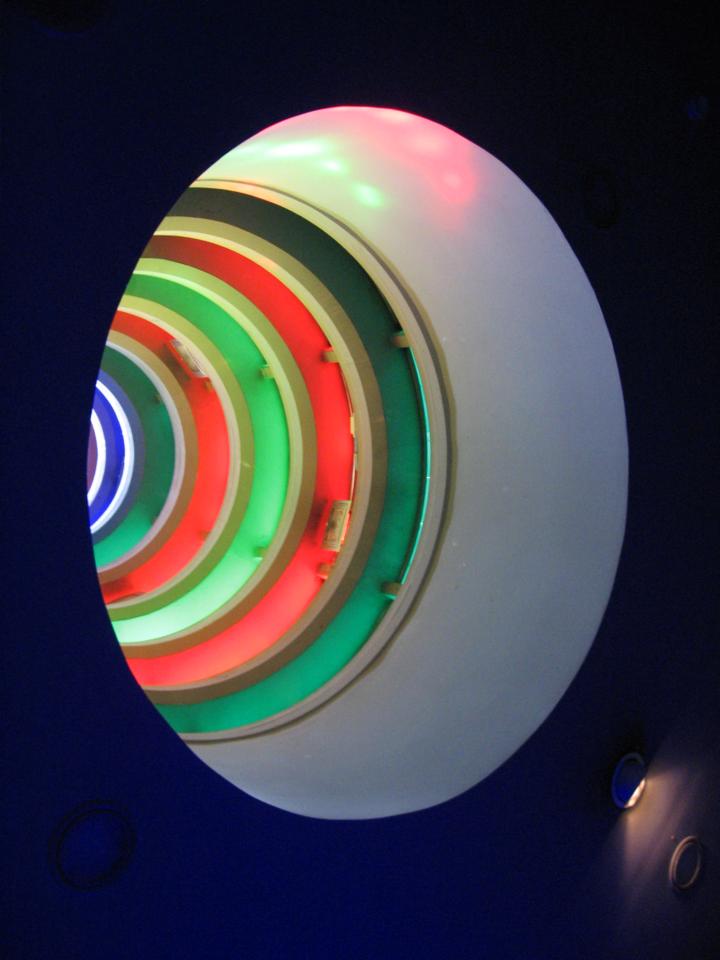 The natural light is filtered by the colored glass and casts a special holy atmosphere. 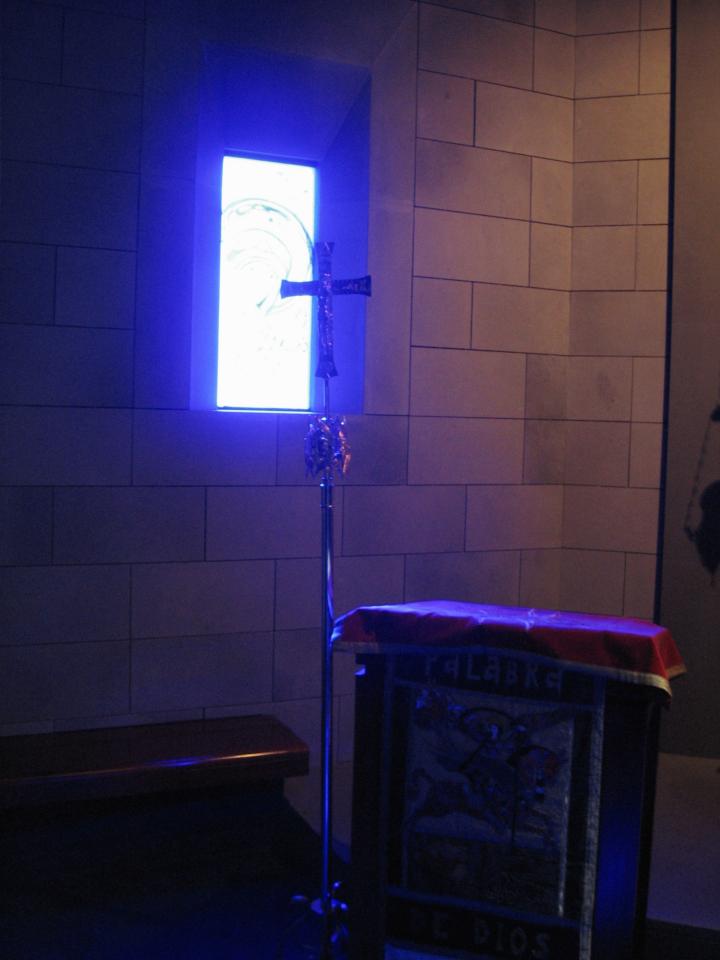 There are several large meetings rooms, like this one – on the western side of the building – which is dominated by a very large mural. 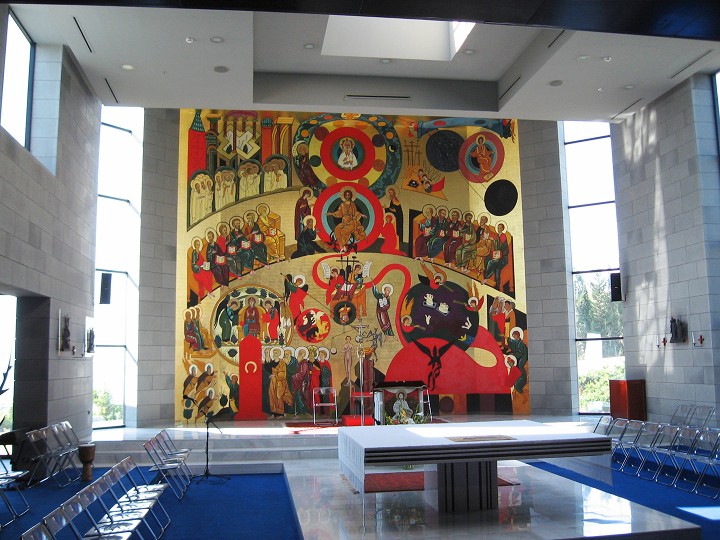 The mural in detail is shown below: 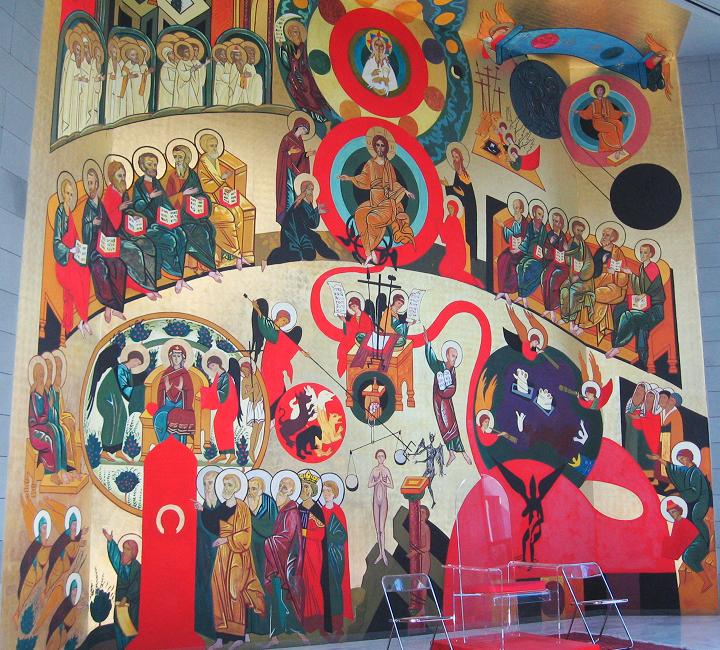 Another large round meeting room, on the southern side, overlooks the sea of Galilee. 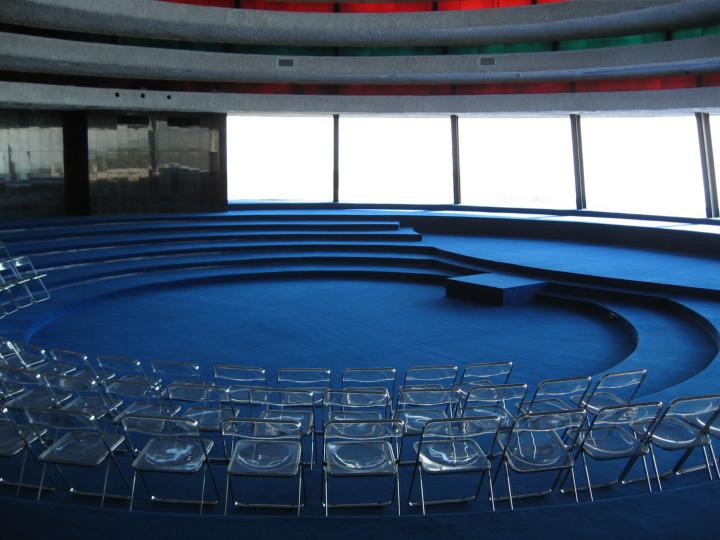 (f) Back side exterior:

On the back side of the structure is a uniquely designed, ultra-modern, roof top balcony. 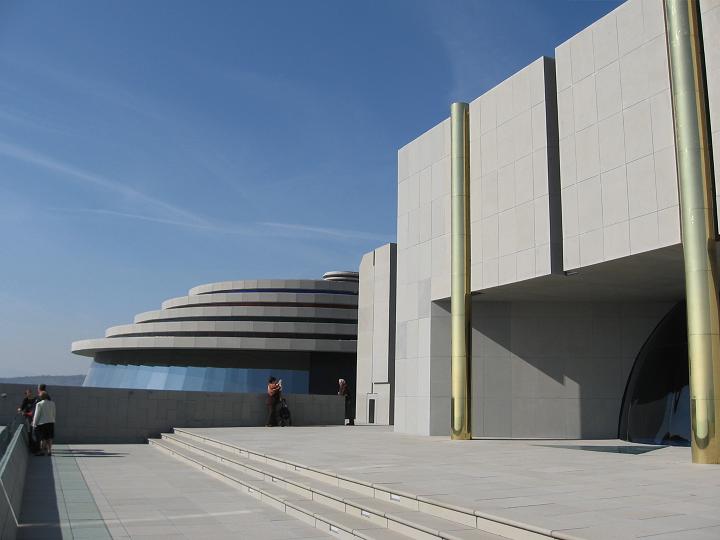 A closer look on the space-age structure on the south-west side, outside the back of the round meeting room. 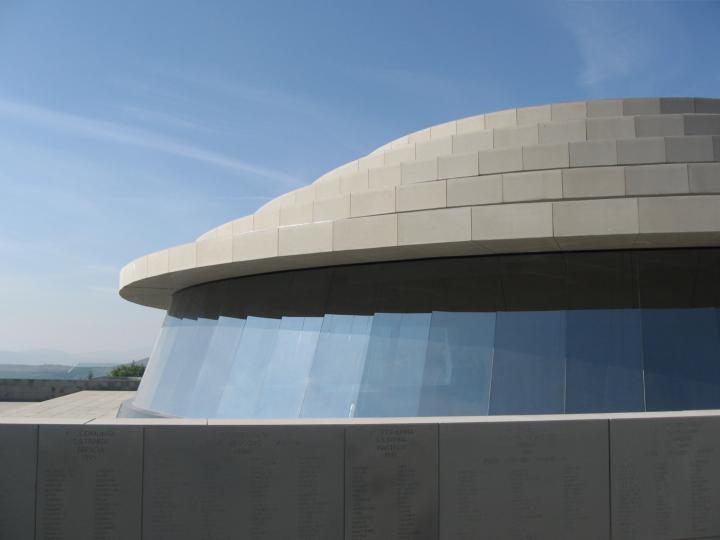 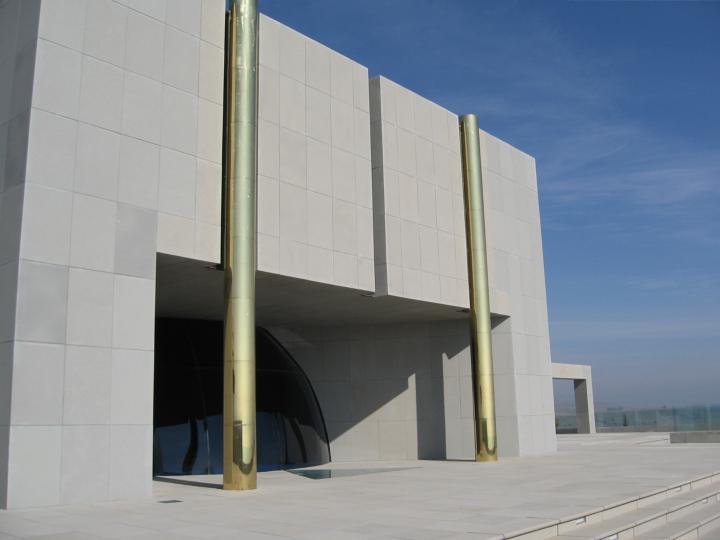 This is the entrance to the library. On the left side of the door is a large recreation of Moses tablets – the ten commandments, engraved in Hebrew letters. 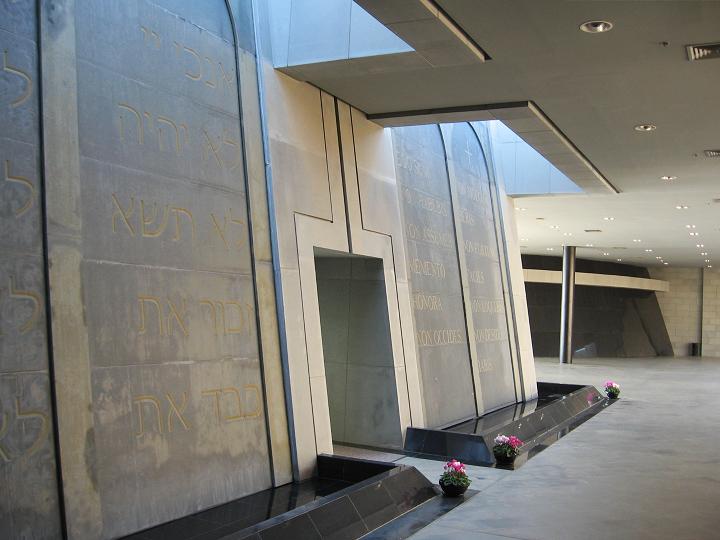 Inside the library is a large collection of religious books, arranged on the shelves lined up against the walls around the room. A glass structure is seen on the right side, where the Bible scroll is located. 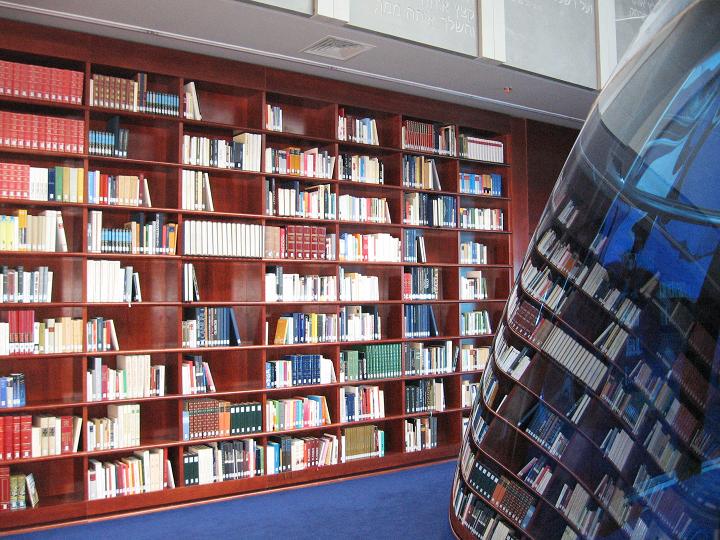 A Bible is on display: 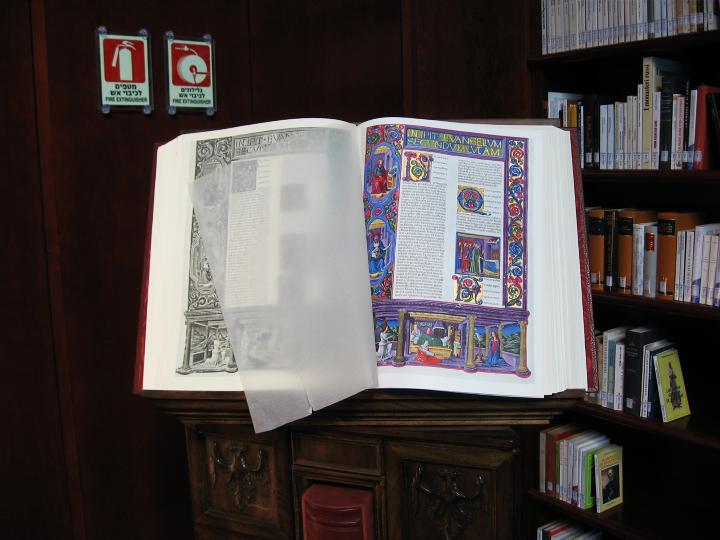 The glass sphere structure on the south side of the library, overlooking the sea of Galilee, contains a 300 years old scroll of the Hebrew Bible. It was delivered in a special ceremony by Rabbis and Bishops in March 2005. 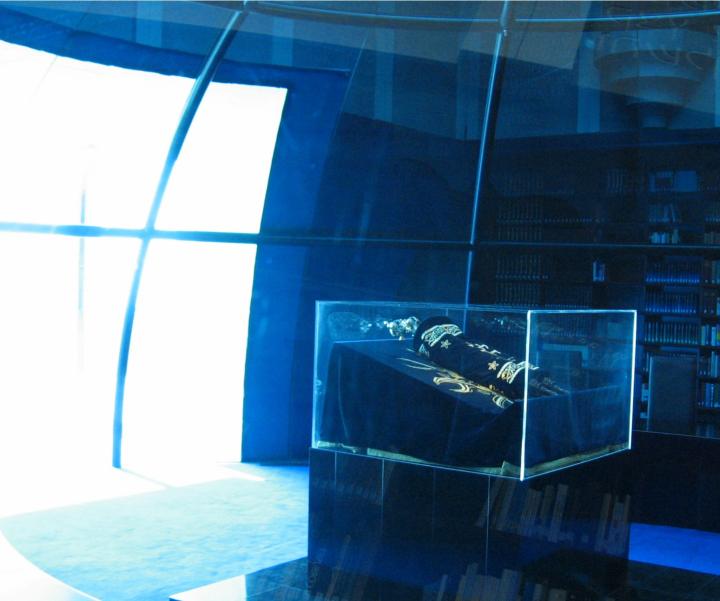 These texts relate to the Mountain of Beatitudes, where the Domus Galilaeae site is located.

This text describes the sermon on the mountain of Beatitudes (chapters 5-7):

“And seeing the multitudes, he went up into a mountain: and when he was set, his disciples came unto him:
And he opened his mouth, and taught them, saying,”

“And he came down with them, and stood in the plain, and the company of his disciples, and a great multitude of people out of all Judaea and Jerusalem, and from the sea coast of Tyre and Sidon, which came to hear him, and to be healed of their diseases;”

This chapter provides a hint on the place of the mountain. It reads:

“Now when he had ended all his sayings in the audience of the people, he entered into Capernaum.”

Thus, the mountain is located near Capernaum as believed by most Christians, and Mount of Beatitudes is located close to Capernaum.