Overview of Byzantine monasticism, and summary of the sites associated with the Byzantine Monks in the Judean desert.

This page provides an overview of Byzantine monasticism and  summarizes their way of life, the prominent leaders, and the sites associated with the Byzantine Monks in the Judean desert.

The surge of the Christian monks in the Judean desert during the Byzantine period created a thorough change in the number of settlements located in this harsh desert landscape. About 60 (!) monasteries were established during this period in the desert, and between 10,000 to 30,000 monks were living there. Therefore, it is important to understand the roots and characteristics of the Byzantine monasticism while exploring the area of the Judean desert.

Christian Monasticism is a religious way of life, where the person denounces worldly  pursuits and fully devotes one’s self to spiritual work under religious vows. The word originates from Greek, based on the act of  ‘dwelling alone’ (monos). The monks, a word derived from Monasticism, lived in seclusion from the World in places called monasteries (also derived from monos).  They withdrew from society and devoted themselves to the purpose of spiritual renewal and return to God.

Many such monks found the desert as the suitable place of seclusion, following the ‘Desert theology’ of the Old Testament, where the Israelites wandered for forty years in the desert in order to change their nature and heart.  They also were following the footsteps and life-style of Jesus , who secluded to the desert for forty days in order to prove his obedience to God (Matthew 4:1-11, Mark 1:12-13, Luke 4:1-13) , as well as Elijah the prophet and John the Baptist. The desert monks are often called ‘Hermits‘, based on the Latin and Greek words ‘eremita’ and ‘eremites’ (means: “of the desert”).

During the Byzantine period (4th-7th century AD) the hermits found the Judean desert a place of choice for seclusion in the Holy Land. Although this desert is close to the Holy city of Jerusalem, it is also remote and hardly uninhabited. Many of these monks initially were pilgrims who toured the Holy sites, and were overwhelmed  by the spiritual experience. Their religious passion drove them to a deeper devotion to God.  The number of hermits grew from just a few monks who secluded themselves in the caves of the Judean desert, and gradually grew to ten thousand or more hermits who lived in the monasteries constructed in the desert.

Other monastic desert centers in the area of the Holy Land were located along the Jordan valley and in the Sinai Peninsula. 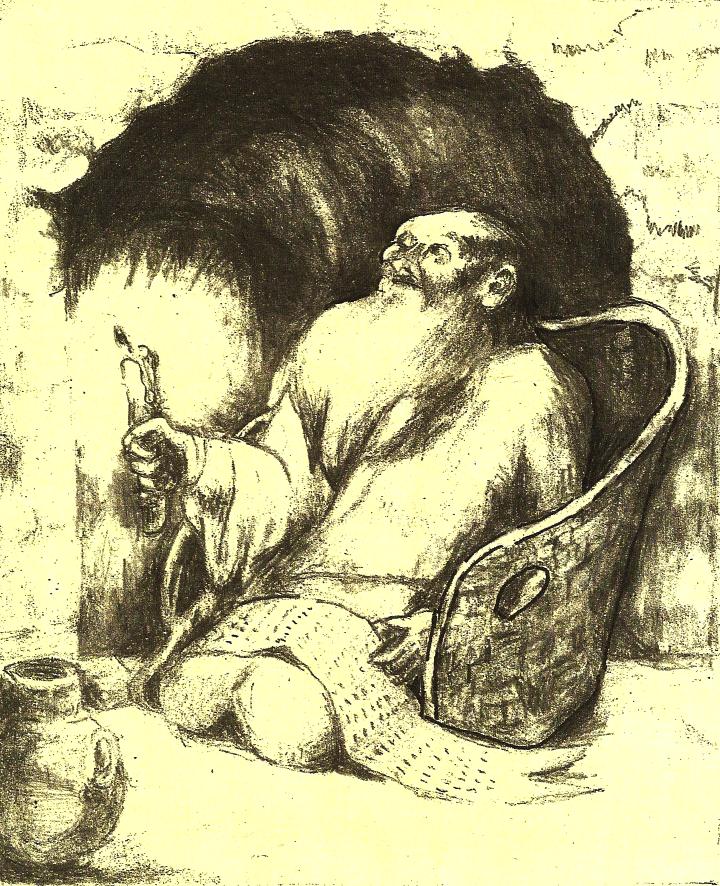 Drawing of a monk – by Grandma Rina

The monastic way of life evolved during the early history of Christianity, and developed in diverse forms.  The desert hermits started to dwell in natural caves or rock shelters, living in seclusion in a very modest and secluded life.

During the Byzantine period this way of life  formalized into two common methods of Judean desert monasticism – the Laura and the Coenobium. Initially these forms were loosely formulated, but in time the oral tradition became more disciplined and followed strict written rules.

Fathers of the Desert Monasticism:

These are some of the most important figures of the desert monasticism.

Hilarion is one of the important early monks in the Holy Land.

He was born south of Gaza, son of a pagan family. At the age of 15 he became a Christian, and joined  Antonius the Great in Egypt – where he stayed for 2 months (306). Hilarion then returns to Gaza, and establishes a Laura (328) in the desert between between Gaza and Maiouma. Hilarion operates in the whole region around Gaza, and his center  evolved to become  a large religious center in Gaza (4th to 7th C) with notable followers (Zenon, Petrus or Peter the Iberian, Abba Isaiah).

Hilarion influenced the early stages of Monasticism. His Laura became a sort of preliminary Coenobium, with characteristics of a commune life.

Chariton is regarded as the founding father of Judean Monasticism, and established the first 3 Lauras. He came from Iconium (Central Anatolia in Turkey) to Jerusalem on a pilgrimage to the Holy sites, and was abducted by Robbers. After a miraculous release, he stayed in the robbers’ cave in Upper Wadi Kelt (above Jericho). Chariton followed the same pattern as Antonius the Great, the father of hermits of Egypt: he first secluded in a small cave, then many other monks joined him for respect and guidance, and so he leaves again to another secluded site – and so on and so forth.

In 330 AD Chariton establishes the first Laura (Faran or Pharan) .  This first Laura was a prototype for other similar monasteries, and his students (such as Euthymius and Theoktistus) continued the same pattern in other sites. After many monks joined the Laura, Chariton relocated to two other Lauras: Doka west of  Jericho (Dok – a former Hasmonean fortress), and Soka in upper Nahal-Tekoa. The monasteries of Chariton are all located in remote locations at the edge of the desert or on the cliffs above the Jordan valley.

He became famous for healing a son of a Arab leader, and many hermits gathered around him. To further stay in solitude, Euthymius relocated after 10 years (421) with a fellow hermit Domitian to  the ruins of Masada (“Marda”), forming the core of a new Laura. He then moves to caves near Tell-Ziph, southeast of Hebron, where he establishes the coenobium of Capar Baricha (near Beni Na’im).

Euthymius died at the age of 97 (473). A few years later (482) the Laura was changed to a communal monastery (Coenobium).  In his time, the Land of Israel replaced Egypt as the center of Christian Monasticism.

Sabas helped to establish more monasteries in the desert: He and his monks established during this time a total of 13 (!) monasteries in the Judean desert –  7 Lauras and 6 Coenobiums. Several older monasteries came under his management  – including the famous Monasteries of Euthemius and Theoktistus. In his times the number of hermits grew from hundreds to thousands. The author of the “Life of Sabbas”, Cyril (Kyrillos) of Skythopolis, summarized his lifetime mission as “converted the desert to a city”.

His influence reshaped the customs and living habits of the monks. He was the first among the desert hermit fathers who formulated a set of written rules for the conduct and way of life for the desert monks in the Judean desert. Sabas is regarded as an efficient administrator and Holy man, rather than a pure theologist.

After his death in 532 at the age of 93, Sabas was buried in the yard of the monastery.

Gerassimos attended the Fourth Ecumenical Synod at Chalcedon in 451. This gathering of the council in Asia Minor was a key turning point in the Christian religious debates and caused a major split in the Eastern Orthodox world. Gerassimos was initially against the decisions of the council, but later supported them.

The monk, also known as St. Gerasimus of the Jordan, died in 475.

The following table lists the sites related to the subject of Judean hermits, monks and monasteries. Click on the site’s title to see more information on each site. Click on the photos to enlarge them. 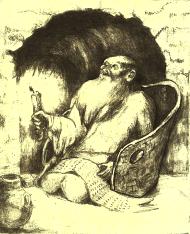 BibleWalks.com – Travel the sites of the Holy Land