Tel Regev was a biblical fortified city that was one of the passing points across the Kishon river. Its history spanned from the Early bronze age to the Byzantine period.

Tel Regev (Tell Harbaj) was a biblical fortified city near one of the passing points across the Kishon river, that flows north of the Carmel. It is a Tel (mound), with many layers of history, spanning over 3,500 years from the Early bronze age to the Byzantine period. It belonged to the Asher tribe, but its identification is not certain.

Today it is ruins, located on the east side of Kefar Hassidim.

The Tel is located near Kefar Hassidim, on the east side of the modern road from Yagur junction towards  north.

In the ancient times, the main highway (Via Maris) passed from North to South at this point, and had to cross the Kishon River, located 500M to the south. This made the site a prime location.

Furthermore, Tel Regev is located 100M south of the Nahal Zippori (Sepphoris) creek, which bends at this point towards the west and eventually flows into the river of Kishon. This gave the Tel its waters (an important factor at these times) and made the crossing of the creek yet another asset. Its waters may have also served as a barrier around the city walls.

Note: 2Km to the north is a new regional cemetery that opened in 2005, and is also called “Tel Regev”. It is not associated with this site, but its name (Regev in Hebrew means: clod of earth) seemed worthy for a cemetery.

This city was established in the early Bronze (Canaanite) period (3150BC-2200BC).

The area was  examined in the Palestine Exploration Foundation (PEF) survey (1866-1877) by Wilson, Conder and Kitchener.  A section of their map is here.   Tel Regev appears as “el Harbaj”, located on the west side of the main road connecting the south, via Jidru (today, Kefar Bialik) to the coastal road on the north.

Part of Map Sheet 5 of Survey of Western Palestine,

Professor John Garstang, who headed the department of archaeology between 1920-1926 during the British mandate and founded the School of Archaeology in Jerusalem (now the Kenyon institute),  excavated the site in the 1930s.

A salvage excavation was conducted at the site in 1993. A large amount of the Early Bronze Age pottery was discovered, and on its surface several shreds from the Middle and Late Bronze Ages and some of the Iron Age.

The new agriculture village of Kefar Hassidim (Kfar Hasidim) is located near the site.

Tel Regev is located between the Kishon River and Zippori Creek which bends west at this point.

The following view shows the points of interest. Point on the purple points to navigate to the selected point. 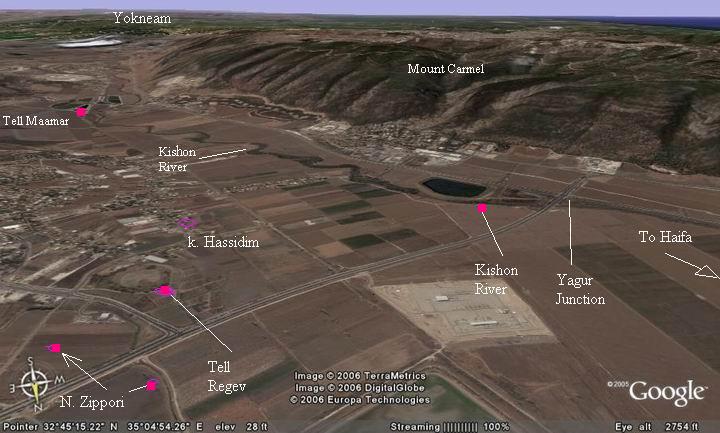 This aerial view was taken in June 2015, captured by a quadcopter from the south side. The Zippori stream flowed just behind the mound, where a modern road leads from the bay area to Kefar Hassidim and Tivon. 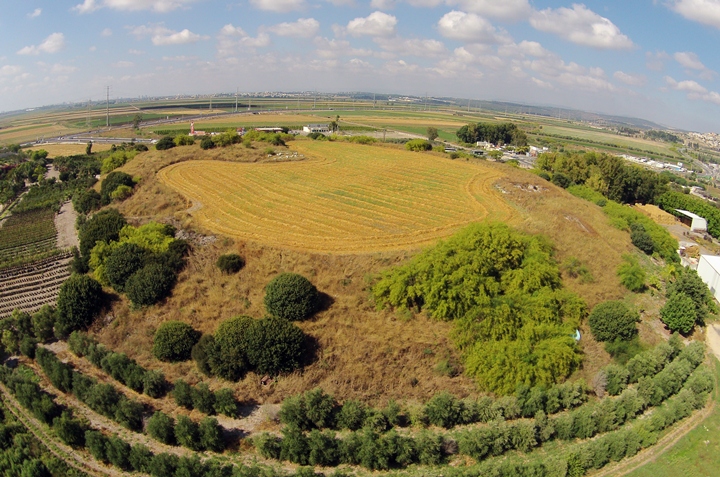 The next photo is a closer view on an excavated section on the eastern side of the summit: 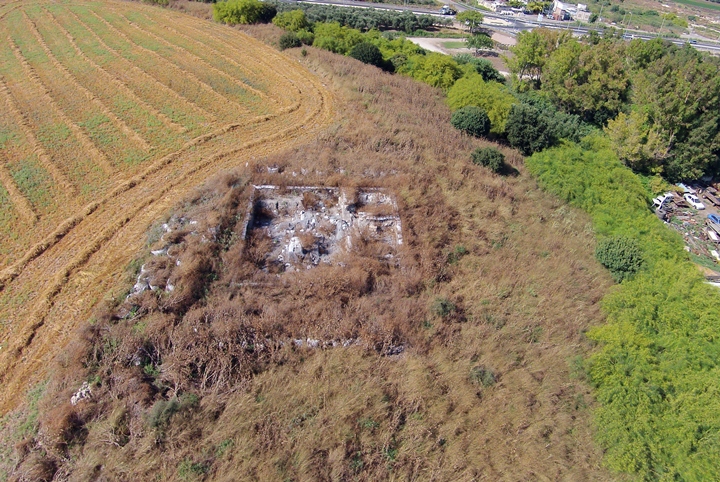 On the west side of the summit is a 30m x 30m cavity where John Garstang excavated in the 1930s. 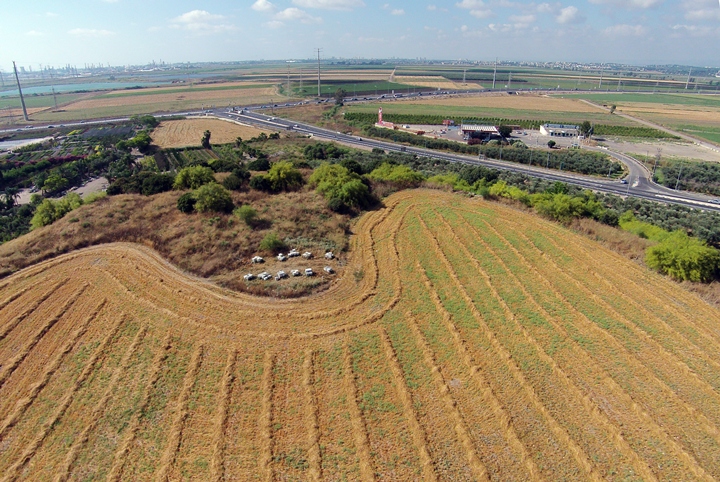 A flight over the site can be seen in this drone video.

The Tel is a round hill that towers 18m above the surrounding grounds. The photo below is a view from the south-east, taken from the old road side. 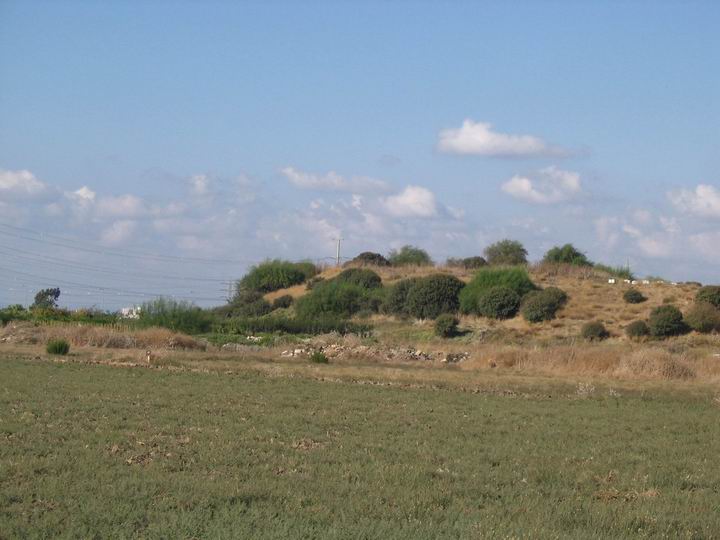 Another view from the south-west side is seen below. 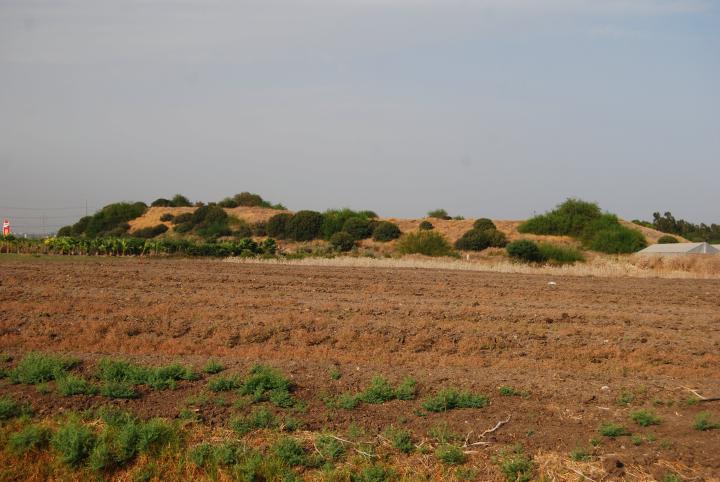 This is a view from the north-west, taken from the new highway junction of Kefar Hassidim. In the background you can see the edge of mount Carmel. 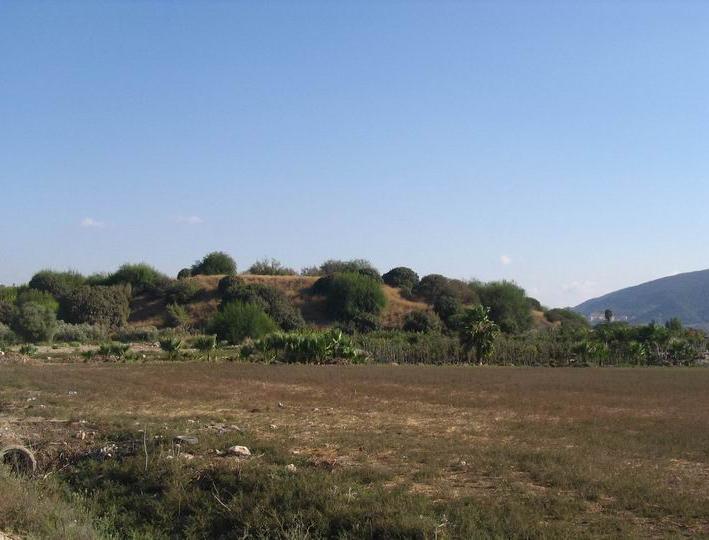 A closer view of the steep foothills on the north side is seen below. This was once a steep glacis and defense walls which was built around the city. The Zippori (Sepphoris) creek flowed along this side, adding another protection to the fortified city. 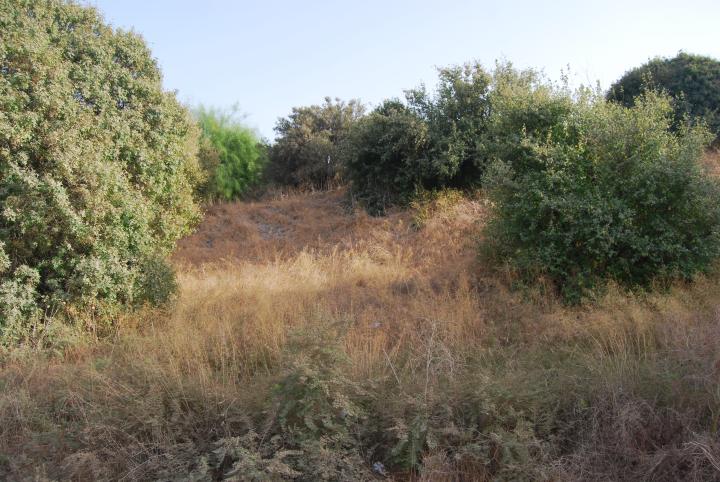 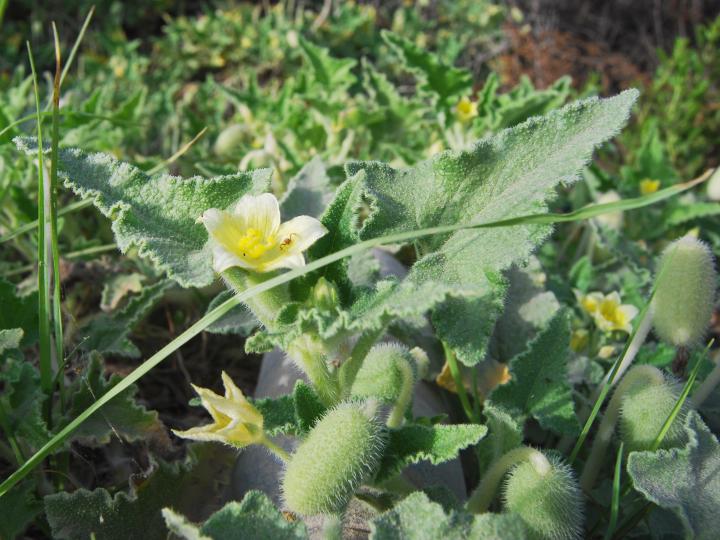 The Squirting Cucumbers plant may be identified as the “wild gourd” that was gathered by Elisha’s servant (2 Kings 4:38-39):”And Elisha came again to Gilgal: and there was a dearth in the land; and the sons of the prophets were sitting before him: and he said unto his servant, Set on the great pot, and seethe pottage for the sons of the prophets. And one went out into the field to gather herbs, and found a wild vine, and gathered thereof wild gourds his lap full, and came and shred them into the pot of pottage: for they knew them not”. 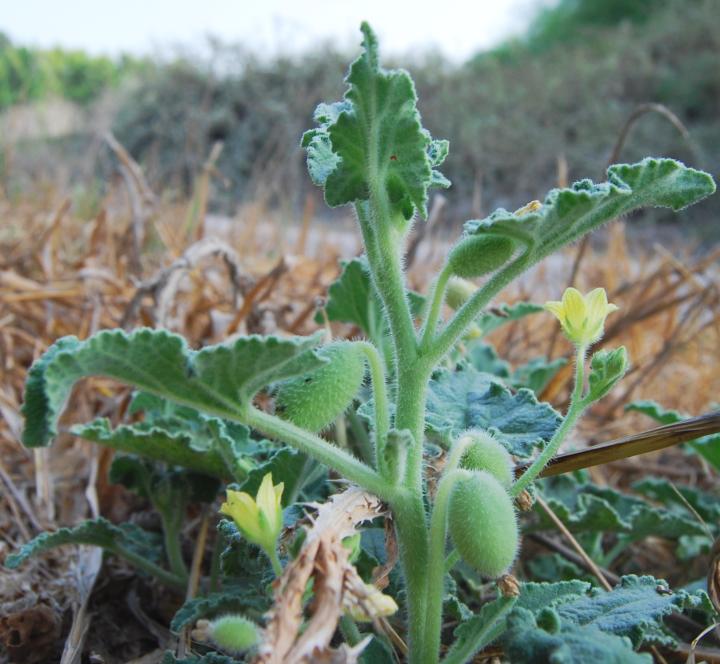 This text, describing the land of the tribe of Asher, lists the cities in their area. One of the sites  may relate to Tel Regev – maybe it is Achshaph which is listed near Khali and Beten (maybe Tel Par near Ibtin). However, Achshaph may also be identified in Tel Kisson (Kissan), as per  some scholars.

“And the fifth lot came out for the tribe of the children of Asher according to their families. And their border was Helkath, and Khali, and Beten, and Achshaph And Alammelech, and Amad, and Misheal; and reacheth to Carmel westward, and to Shihorlibnath; And turneth toward the sunrising to Bethdagon, and reacheth to Zebulun, and to the valley of Jiphthahel toward the north side of Bethemek, and Neiel, and goeth out to Cabul on the left hand, And Hebron, and Rehob, and Hammon, and Kanah, even unto great Zidon;

If Tel Regev is indeed Achshaph, then this city is also listed as the Canaanite cities that fought, and lost, against Joshua and the Israelites during the conquest of Israel:

“And it came to pass, when Jabin king of Hazor had heard those things, that he sent to Jobab king of Madon, and to the king of Shimron, and to the king of Achshaph, And to the kings that were on the north of the mountains, and of the plains south of Chinneroth, and in the valley, and in the borders of Dor on the west, And to the Canaanite on the east and on the west, and to the Amorite, and the Hittite, and the Perizzite, and the Jebusite in the mountains, and to the Hivite under Hermon in the land of Mizpeh. And they went out, they and all their hosts with them, much people, even as the sand that is upon the sea shore in multitude, with horses and chariots very many. And when all these kings were met together, they came and pitched together at the waters of Merom, to fight against Israel. “

The king of Shimronmeron, one; the king of Achshaph, one;”

This text tells about the Solomon-Hiram agreement, where the area of west Galilee was traded with the Phoenicians. This area, called Cabul (or Kavul), might have included Tel Regev as well, since the number of cities (20) corresponds to the number of cities listed above (22).

“Now Hiram the king of Tyre had furnished Solomon with cedar-trees and cypress-trees, and with gold, according to all his desire–that then king Solomon gave Hiram twenty cities in the land of Galilee. And Hiram came out from Tyre to see the cities which Solomon had given him: and they pleased him not. And he said: ‘What cities are these which thou hast given me, my brother?’ And they were called the land of Cabul, unto this day”.

Other ancient sites close by:

Visit the following sites, which are north of Tel Regev:

To the south, in Lower Galilee: