The west side of Nahal Zippori (Sepphoris creek) has several ancient sites spanning from Prehistoric times until recent time. They enjoyed the year round water flowing in the valley, the great soil, and strategic location.

This page reviews the western  section of the Sepphoris creek (Nahal Zippori),  which flows into the Kishon river. It describes the natural and pre-historical sites, as well as the flour mills.

In this area there are several ancient sites. They are detailed in another page – Khali.

The Zippori creek flows year round into the Kishon river. It starts from the springs near the ancient city of Sepphoris (Zippori), and winds down and westward in a valley between the hills of lower Galilee.  Its flow is slow and snake-like,  finding its way between the low hills. The fields in the basin of the valley are always green and the soil is great for agriculture. Even today, the farmers have ideal conditions.

The flow of water made the construction of flour mills possible. These were important for the local farming. In this area there are 2 sites of such mills: a pair of mills near Tell West Khali, and the Carmelite monks flour mill. These flour mills were in use for hundreds of years.

Close to the plains of the bay of Haifa, where the creek flows into the Kishon river, there are also a number of ancient villages in the last 3 KM before the end of the valley. This area was inhabited over thousands of years. These ancient sites are: Tell Allil (Khali), Tell West Khali, Khirbet Govit and Khirbet Sasay.

The following aerial view shows the points of interest. As you can see, the Zippori creek snakes around the low hills on its way to the sea, which is on the west (the left side). 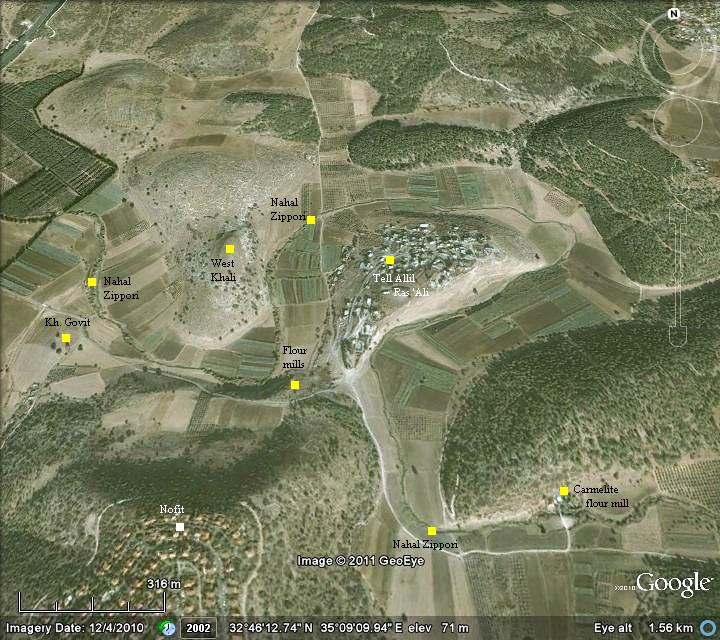 Along the creek there are many sites, starting from prehistoric times. In almost the whole stretch of the valley you can walk the banks of the creek and pick up early man’s flint stones. They are scattered in many sites, showing that the area was inhabited in the prehistoric periods. According to the Archaeological survey (see reference) most of the prehistoric findings in this area (as seen in 3 sites along the west side of the creek) were from the Neolithic period (8,300 -4,500 BC) and Chalcolithic (Copper) period (4,500-3150BC).

These sites are described in a separate web page.

Today there are several settlements and villages around the area: Jewish settlements Adi, Harduf and Nofit  and the Arab villages Khwalad and Ras ‘Ali.

South of Tell West Khali (seen in the background of the photo below) are the remains of 2 flour mills dated to the Ottoman period (the actual date is not clear). These flour mills were operated by the power of the falling flow of water, which was diverted from the creek from an upstream point. The water flowed through channels (now filled with dirt) and fell down on a wooden wheel that turned the grinding stone around –  thus crushing the wheat into flour. 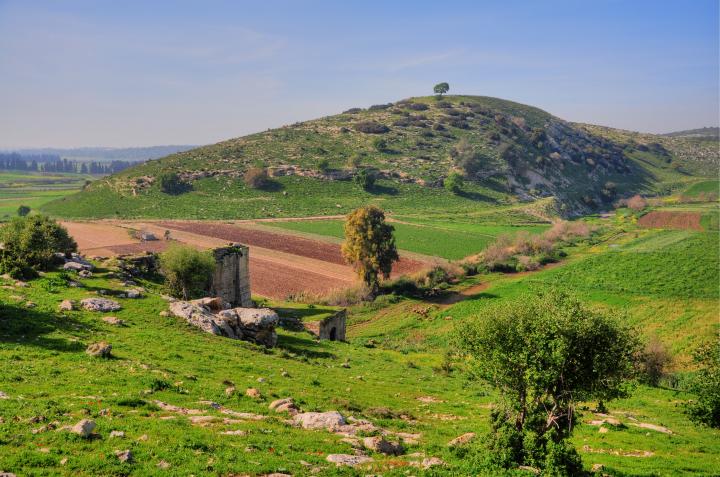 In the picture below is a section of the water channel that leads to the upper section. It  diverted water from the Zippori creek upstream, passing inside tunnels hewn into the hillside, bringing the the water from the creek to the water mills. 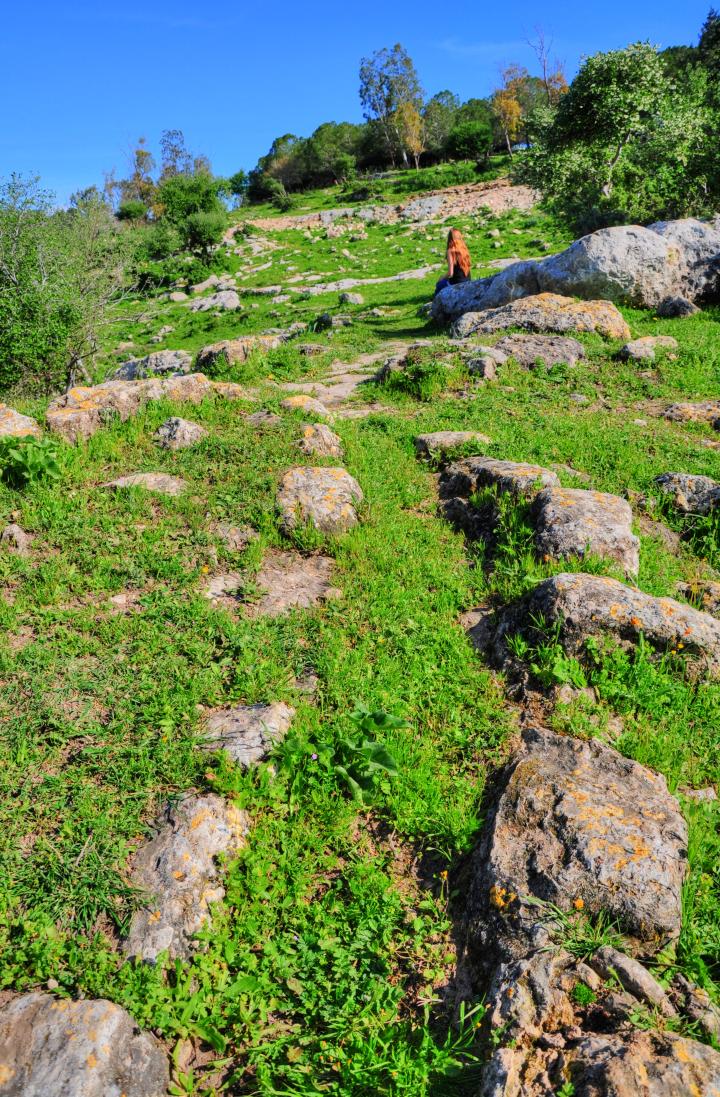 Each mill has a high wall where the water fell down – 12.3M on the upper mill, and 10M at the lower mill. 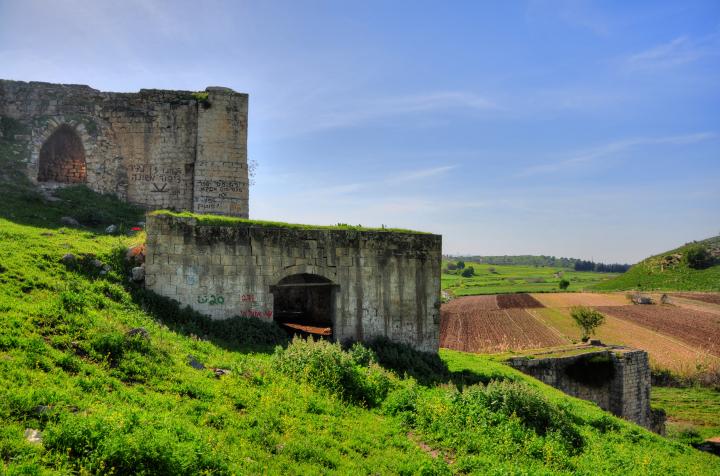 In the lower section of each mill was a wheel that turned the grindstone.  The photo below is what remained from the grindstone structure.

Over the years the mills were repaired and upgraded. In 1914 the wooden wheels were upgraded to iron wheels. However, the era of water mills came to an end, and the production has stopped in 1946. 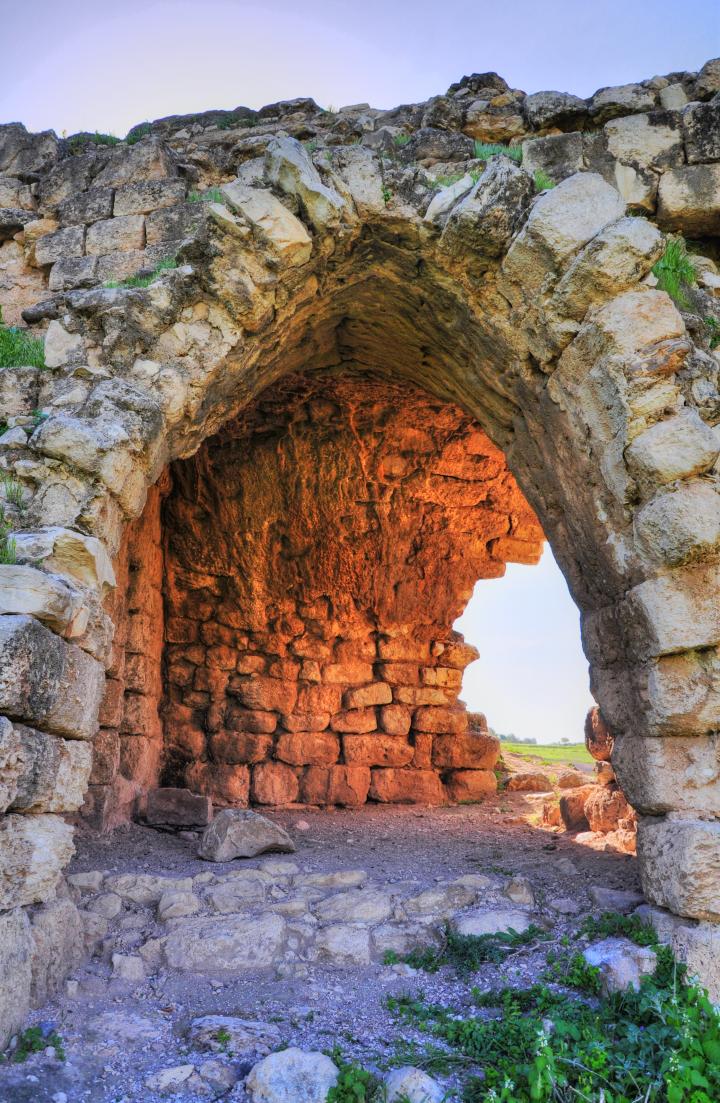 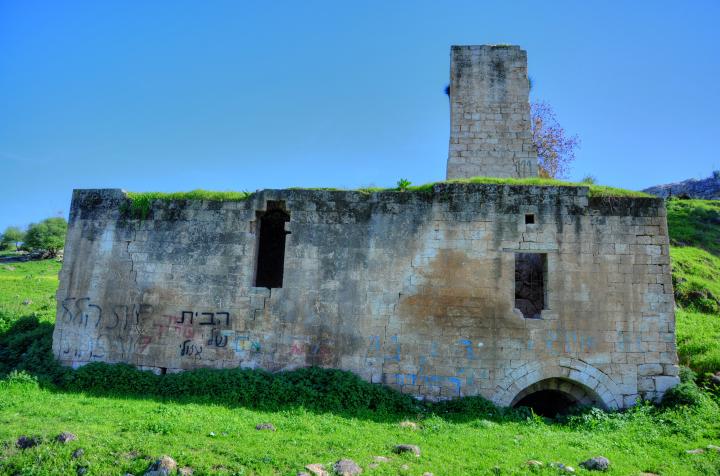 The outlet of the water from the bottom of the upper mill is seen in the next picture: 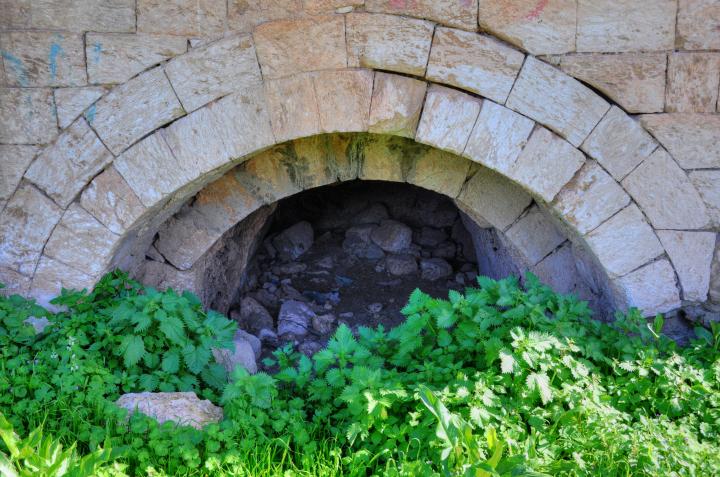 The lower mill is seen below, located just above the Zippori creek. 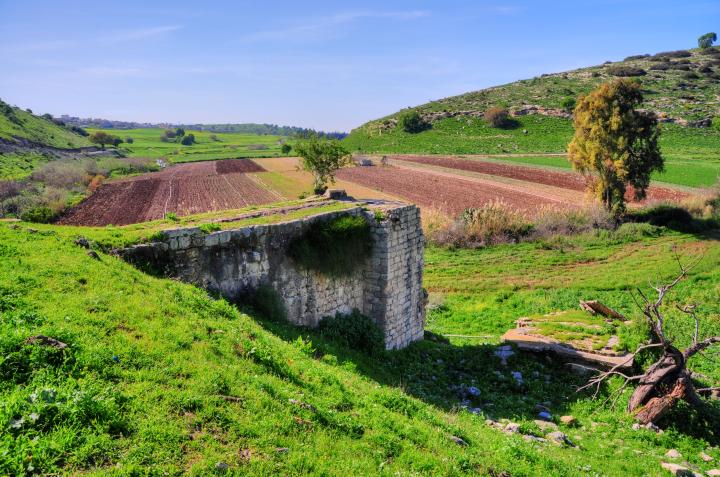 The water channel leads to a hole at the edge of the wall, and the water fell down to turn the wheel. 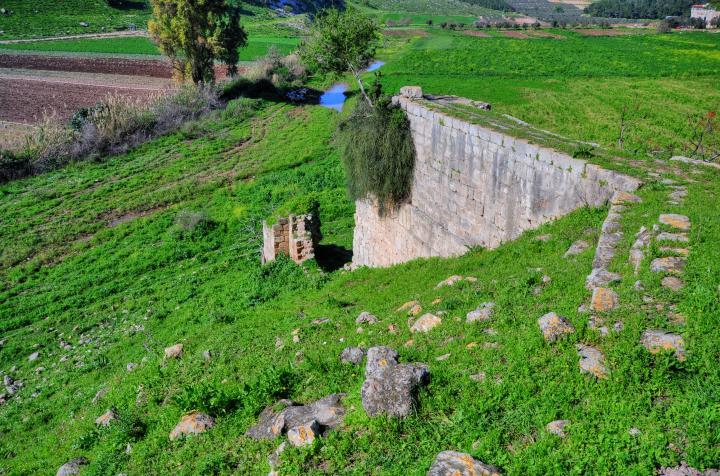 A panoramic view, as seen from the western flour mill, in seen in the following picture. If you press on it, a panoramic viewer will pop up. Using this flash-based panoramic viewer,  you can move around and zoom in and out,  click on hot spots, and view the site in full screen mode.   Note that it may take minutes to upload.

About 1KM upstream is another flour mill that was operated by the Carmelite Monks.  They were initially built by Druze from Daliat-El-Carmel, then sold to the Carmelite monastery in the 19th century.

In the background – the new settlement of Harduf. 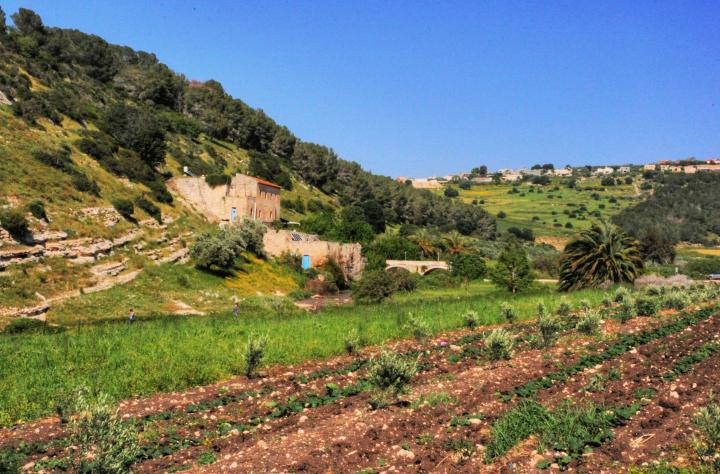 A closer look on the flour mill is below. The water was diverted 2KM upstream and tunneled in the back of the house (you can see the tunnel on the top/right of the house).  The water came from Yivka springs, another ancient site located 2 KM upstream.

The water was first divided to 2 tunnels in order to activate 2 mills. Then the water fell down through a pair of chimneys to the lower floor, turning the wheels and their grindstones. Inside each grindstone the wheat grains were crushed, turning them to flour.

The house is a 2 story structure.   The water flowed under the floor of the upper level, through tunnels on top of the roof of the lower floor, and fell again through another pair of chimneys to the ground level, turning another pair of grindstones. 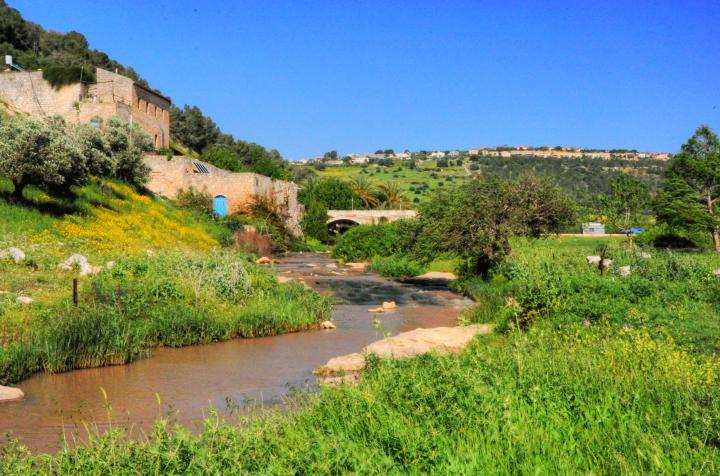 This was one of the sources of income for the Carmelite monks in the 129th and 20th century. Today, this house is a restaurant and pub.

Another view of the valley – taken from Nofit from the south. In the center of the photo is the Carmelite the flour mill, and you can see the canal stretching from the house to the creek.

Behind the hill and the pine tree forest is the new settlement of Adi.  Behind it, in the far background, is Shefaram. 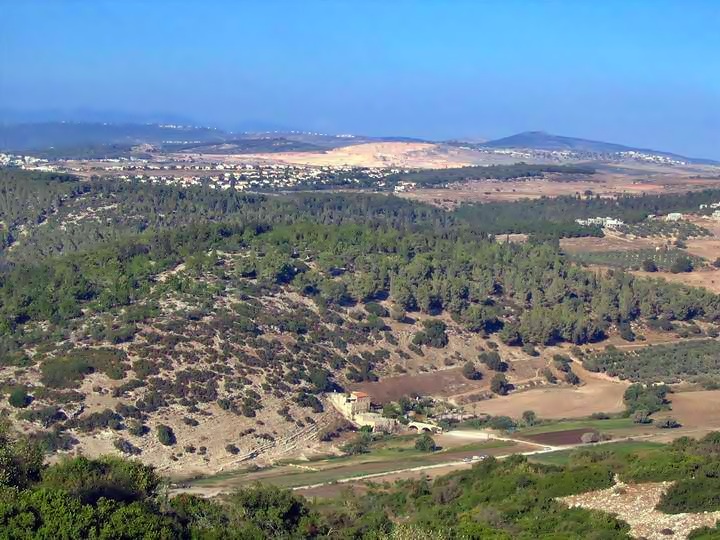 Between the Carmelite flour mill and Tell Allil is a charming section of the creek. In the following photo the creek is seen behind the Hazav (squill) flower, which flowers at the end of the summer (signaling the beginning of the Autumn season). 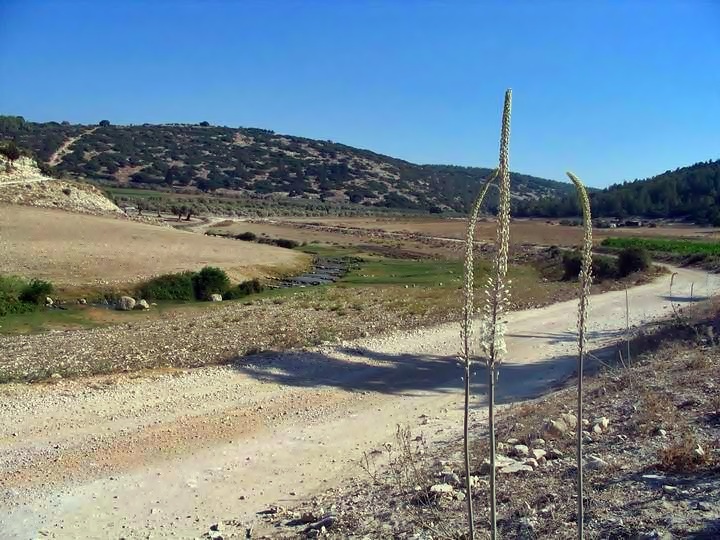 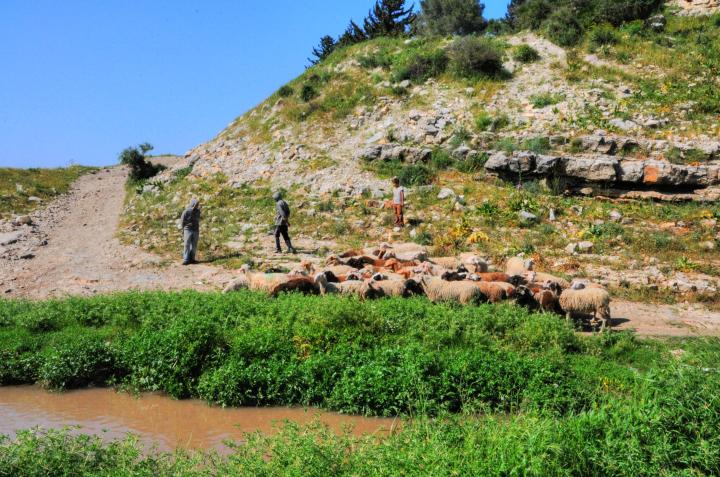 Some of the ancient olive trees were burnt, resulting in a natural sculpture. 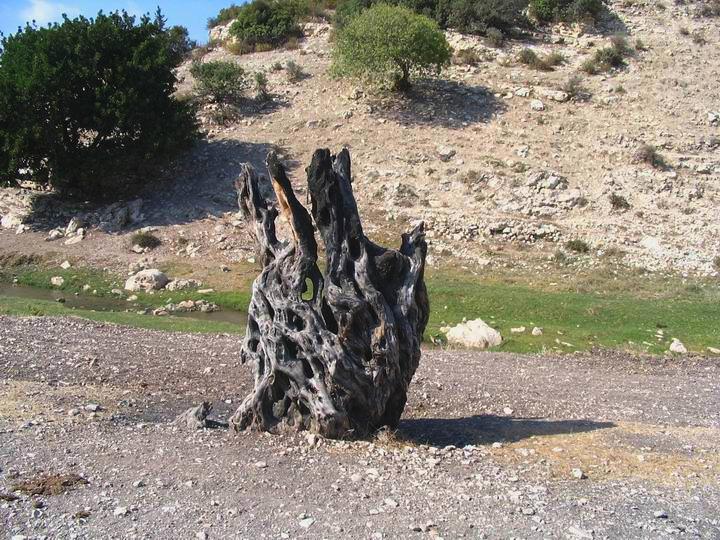