Shefaram – Today an Arab city 8KM from the bay of Haifa, on the west hills of the Galilee. In Roman times – the place of the Sanhendrin. The Crusaders built here a fort to protect the road from Acre to Nazareth. Later, a fort was built in the 18th century .

Shefaram (Shfaram, Shafa-Amar) is a Muslim-Druze city east of the bay of Haifa, and the site of an ancient Jewish-Roman city which was the second Galilee site of the Sanhendrin in the end of the 2nd century  AD. The Crusaders built here a fort.

This city is located at the western hills of the Galilee (100M height), 8 KM away from the bay of Haifa, on the road to Nazareth.

It is strategically  located close to the road that split from Via Maris, the main North-South highway, towards the east (center Galilee, and Jordan). This eastern fork passed through the city (towards  Sepphoris, Yafia and Nazareth) and through Iblin, 2 KM to the north, towards Netufa valley and the sea of Galilee. The ancient road crossed the city in the same path of the road that passes between the two hills inside Shefaram: from top-left (north-west, direction of Acre) to lower-right (south-east, direction of Sepphoris).

The road from Acre or Haifa to Nazareth used to pass through Shefaram until recently (25 years ago).  Now a new highway (#79) bypasses the City from the south. 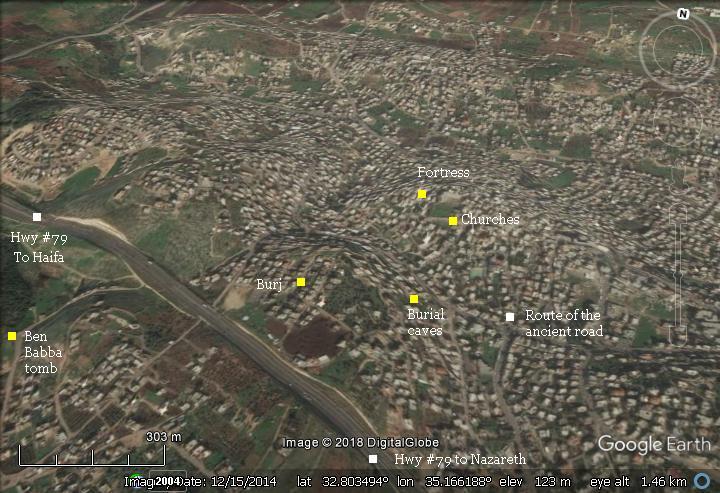 In the Roman times this was a village, one of many agriculture Jewish villages in the area.  Its location on the western hills, close to strategic roads, made it important. During the Roman times (150-163 AD) the Jewish religious and administrative leadership, the “Sanhedrin”, moved to this city. It was its second Galilee location after the destruction of the temple (the first was Usha, about 2 KM south; the 3rd was Beit-Shearim).

A section from Babylonian Talmud (Sanhendrin 14) tells the story of Rabbi Judah Ben Baba. This Rabbi defied the orders of the Romans to avoid ordinating (=giving a degree of a Rabbi) to others. These orders  followed the second revolt against the Romans (131-135 AD: Bar-Kochva), and his act resulted in his death by the Romans, but helped to continue the Jewish leadership during these tragic days.

A junction on highway #79, west of Shefaram, commemorates this event, and is named Somech (Ordinating) junction. Judah Ben Baba’s tomb is located on the south west side of the city. 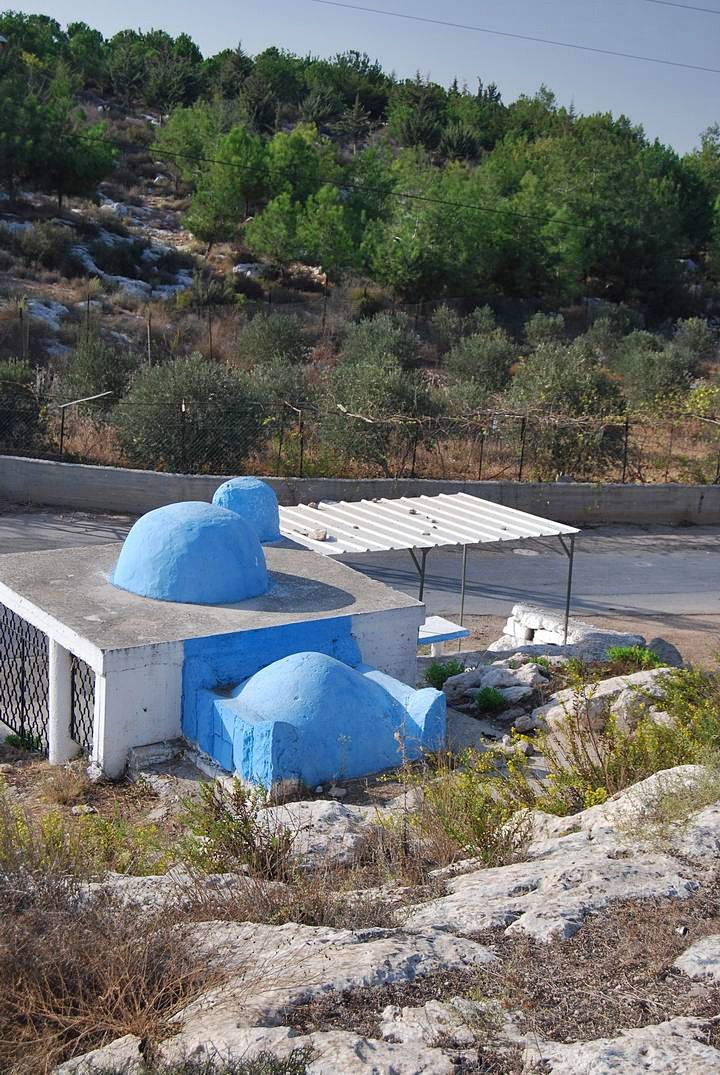 The Jewish town was probably destroyed, as many of the Jewish villages in the Galilee, during the revolt of Sepphoris against Gallus, the ruler of the Eastern Roman empire (351).  It was then mostly populated by Christians. Decorated tombs of the Byzantine period are found in the center of Shefaram, south of the fortress (see special page on these tombs).

During the 12th century, the Crusaders fortified the city in order to protect the pilgrimage road from Acre to Nazareth. They named the small castle: “Le Saffran”. It was controlled by the Knights of the Templars order.  After defeating the Crusaders (1187), Saladin had his headquarters in the city to control the region and as a base against the last Crusaders’ stronghold in Acre (1190-1191, 1193-1194).

The fortress returned to Fredrick II in 1229. The knights of the Templars order once again commanded the fortress in 1250-1. The castle defended the south eastern front of their new Kingdom, centered in Acre. The Crusader’s hold was recognized by Baybars, the leader of the Mamelukes, after the treaty of 1272. The Crusaders continued to hold it until the final assault on Acre (1291), when it was occupied by the Mamelukes.

In the 18th century , during the Ottoman period, a Bedouin named Daher El-Omar,  captured the city and made it his headquarters (1751-1767) before taking Acre as well. He built the fort (1761) that stands today in the center of the city, in the highest place, above the ruins of the Crusaders fortress.  He also built 4 towers (Burj), where only the west one remains to date.

The citizens  changed the name to Shafa-Amar (health of Amar) in his honor, since according to their tradition he was cured by waters of the local well.

A photo of a Bedouin man was captured by the American Colony photographers. The ruins of the site (appears as Shefa ‘Amr”) were  examined in the Palestine Exploration Foundation (PEF) survey (1866-1877) by Wilson, Conder and Kitchener.    A section of their map is shown below. Notice the double dashed line – the path of the ancient roads that crossed the city and split to the south and east. 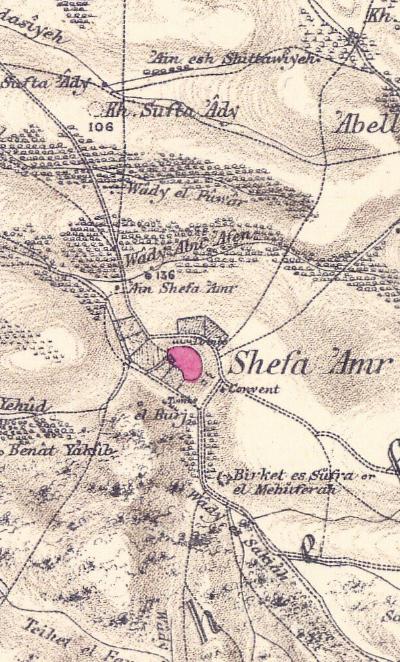 A brief overview of the antiquities was (Volume I, p.339):

“The traces of antiquity at this town include various periods. Tombs, Jewish and Christian ; a church, apparently Byzantine ; and the Kul’ah, Arabic.  Tombs exist north and south of the town ; those on the north close to the convent wall”.

“This is, properly speaking, a town, being divided into quarters and including a mosque and bazaars. It Is the seat ofa Caimaeam, or lieutenant-governor, and chief place of the district. The houses, which are generally built of stone, stand on a hill, with a narrow valley on the south, and one rather broader on the north, in which are gardens of figs, etc. The road descends to an open valley on the west, where is a good grove of olives, in which the Survey camp was pitched.

The principal water-supply is from the ‘Ain Shefa ‘Amr  a spring with a building over it, and a trough, by the main-road. To the south are gardens of fruit, including plums and pears, almonds and pomegranates, figs and apricots ; the gardens are walled and have hedges of prickly-pear.

The town has a large fortress on the south, well-built with crenellated battlements, and containing stalls for 400 horses. This is now partly ruined, the north side being the best preserved. This fortress is said to have been built by Othman, son of the famous Daher el ‘Amr, about 1761, and does not appear to be older. It had once four watchtowers outside the town, of which only one on the south (el Burj) remains. This statement is made by the inhabitants generally. The present mosque is close to the Kalah or castle, and a small ruined mosque exists on the north of the town.

On the east are the threshing-floors, and near them the foundations of a school-house, commenced in 1875 by Rev. J. Zeller. of Nazareth. About 100 yards farther are the convent and church of the Roman Catholic Nuns (Dames de Nazareth), built in 1866, with a school for girls. The church is ancient. The population was stated to me, by the native Scripture-reader, to be 2,500 souls – 1,200 being Moslems, the rest Druses, Greeks, and Latins. There is a Greek Catholic Church in the town”.

In the city lived several Jewish families from the 16th century  until 1920, which is quite rare in Israel.

Due to the massive building in the 20th century , most of the old sites are gone; only the larger buildings survived. However, we recommend to walk through the old center of the town, especially during Christmas when the Christian quarter is decorated and illuminated.

A view from the south, on the road to Nazareth, is seen in the photo below. It shows Daher El-Omar’s castle on the hill in the center of the city. It  stood at the path of the road from Acre to Nazareth.

The Crusaders built a small fortress in the 12th century, which held until 1291 when it was captured by the Mamelukes. In 1761 Daher el-Omar built over the ruins of the Crusader structure a new fortress, and made it his headquarters.

The following photo shows the outer walls of the 18th century  fortress, on the southern side: 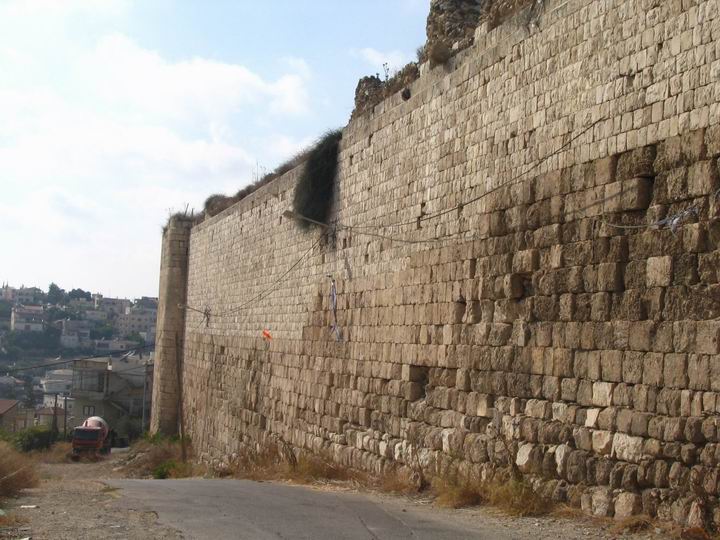 Within the closed walls, there is an inner fort which is built on top of arches.   The fort was used as the Governor’s house, and  later as the Police building. 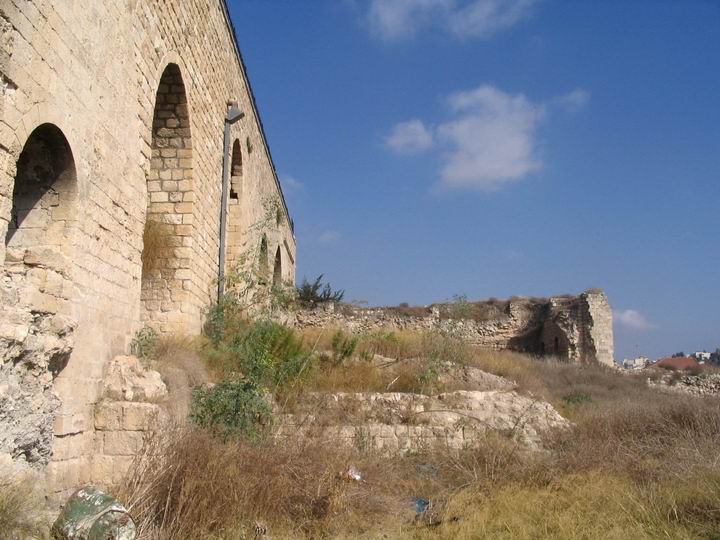 The fort is  built on arched vaults. Each arched hall was 40m long X 7M wide x 8M  height. In one of the halls, there are two dozen stones with holes embedded along the walls, that were used to tie the horses and other livestock. There were once places for 400 (!) horses. 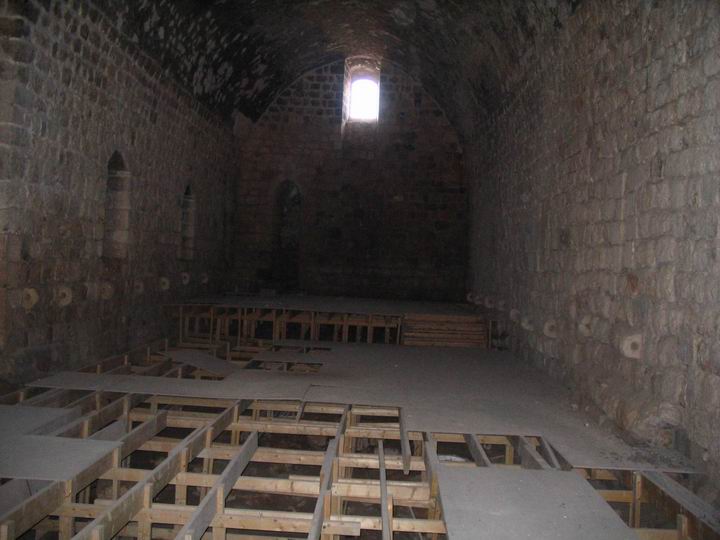 To the south of the fortress are remains of old structures, and a high wall, belonging to an earlier fortress.

The following photos is a view from the top of the castle towards the south-east. The hills in the left background are the way towards Sepphoris and Nazareth.  The ancient road from Acre passed just below the fort, where modern Shefaram is located today. 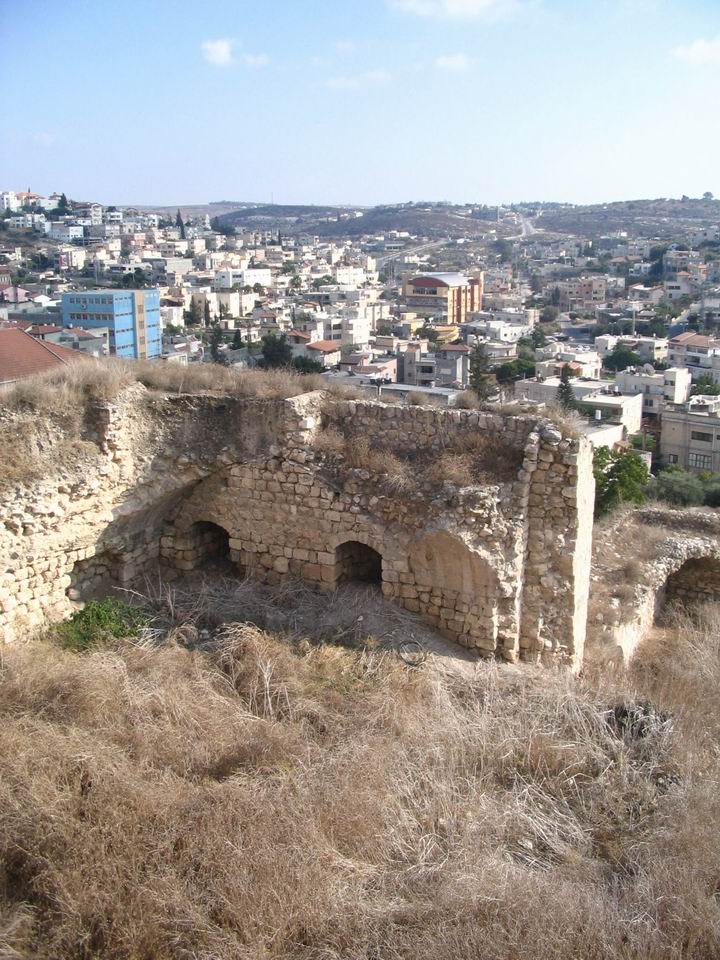 This is another view from the top of the fort, looking north-east. The blue and grey towers belong to the Greek-Catholic church. 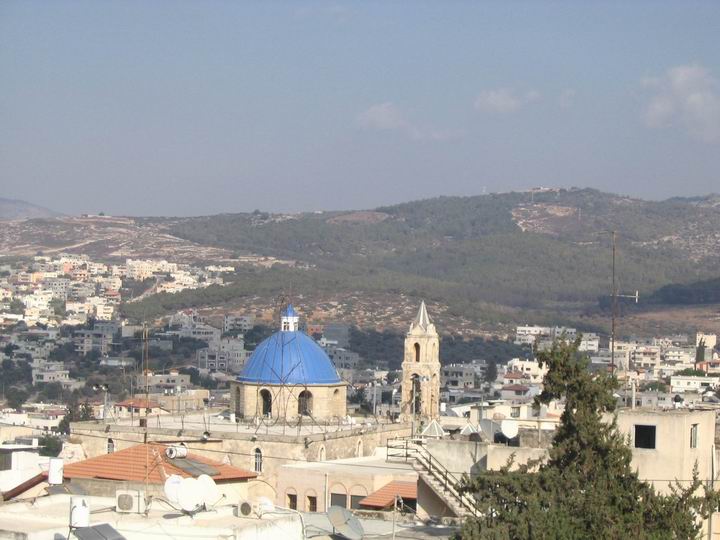 In Shefaram there are several Churches: Greek-Catholic, Greek-Orthodox, Latin-Catholic, and Protestant. They are about 50-100 years old and service the Christians in Shefaram and in the area. All the churches are built in the vicinity of the roof of the fort, on top of the hill.

The Greek-Catholic church seen below. The Greek-Catholics are the largest community among the Christians in Shefaram.  Built in 1904, this church was built on top an older Byzantine church. 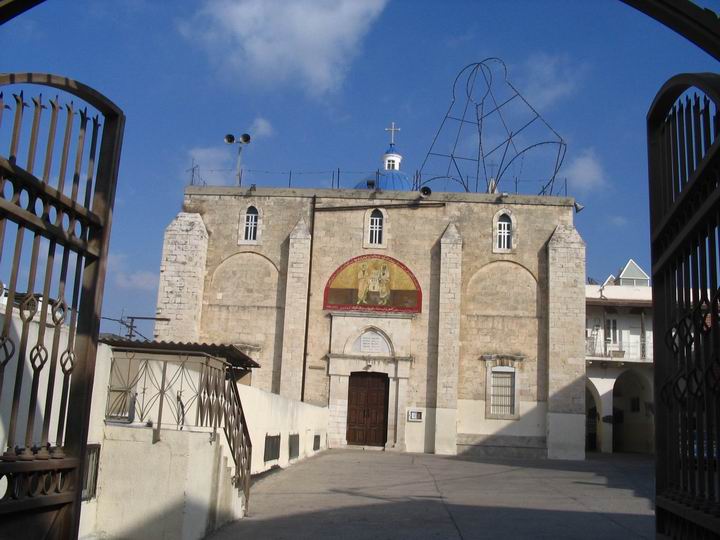 The Palestine Exploration Foundation (PEF) survey (1866-1877; by Wilson, Conder and Kitchener)  described the antiquities in the Church (Volume I, P. 343) :

“The Church has been rebuilt on old foundations. The apse was found standing as high as the cornice ; the south wall up to the sill of the windows ; the north wall stood about one yard above-ground. A pillar was found, now placed in the south-west corner. It has a Byzantine appearance. The church is twenty-seven feet broad, thirty-seven feet six inches along the South wall, with one apse, seventeen feet diameter, on the east. It seems therefore, from plan and details, most probably earlier than the Crusading period, and is probably fifth and sixth century work, perhaps of the same date with the last-noticed tombs”.

In Christmas 2016 a giant tree was set before the church. 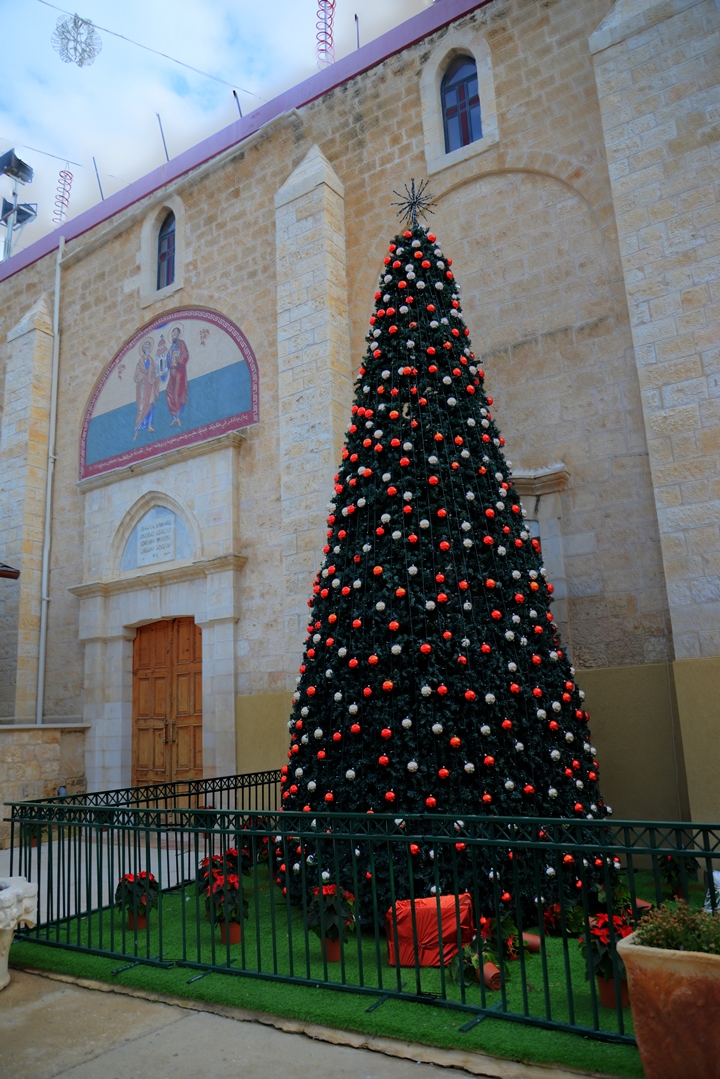 A  smaller Greek-Orthodox church is located several streets away. Its interior is seen below: 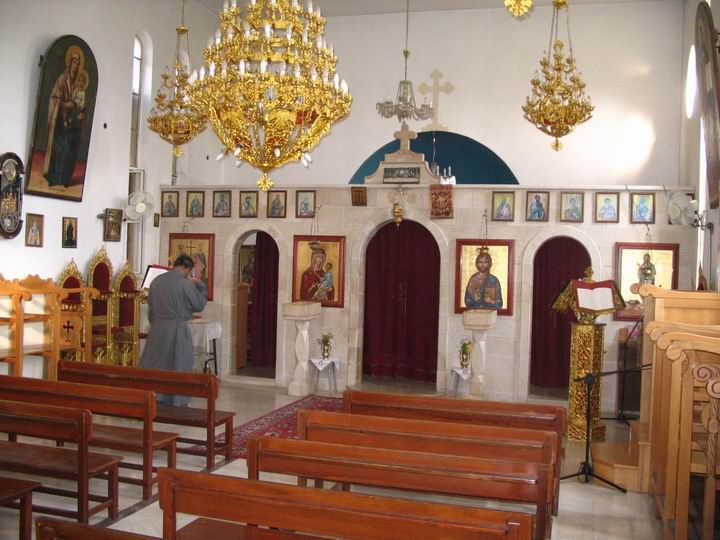 The ancient synagogue is located just behind the Catholic church, and was built in Mid 19th century. It was probably built over older synagogues: the previous from the 17th century , and the first built in the 2nd century  AD. The Jewish community in the 19th century  was small, and were merchants, donkey drivers and farmers. 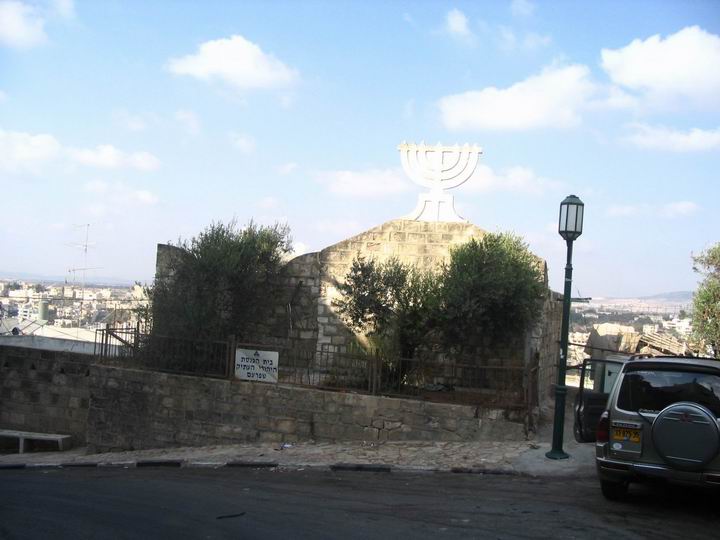 Daher el-Omar built the fort and also 4 towers (Burj), where only a part of  the west one remains to date, as seen in the following photo. The size of this 18th century tower is 12M x 10M. The 2m walls are constructed with 2 lines of hewn blocks, and between them smaller stones. 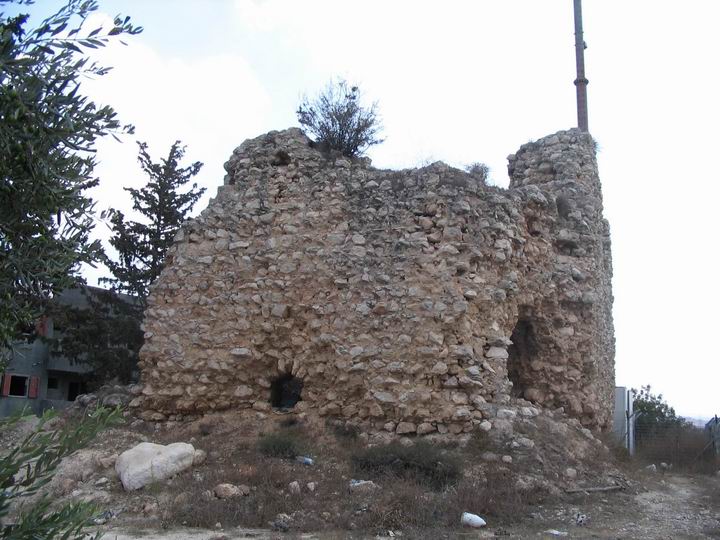