The site is located on the eastern side of Netufa valley, located on the ancient road to the sea of Galilee. It is named after the pillars that are standing in the site, and are part of a 2nd century AD Synagogue. 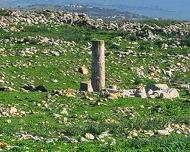 Horvat Ammudim (“ruin of the pillars”)  is situated  along the path of a major ancient road that crossed the Netofa valley. Its ruins are located close to the modern highway #65, known to many drivers who pass this point. A lone pillar stands in the center of the ruins,  which once belonged to a 2nd/3rd century AD synagogue.

Horvat (Khirbet) Ammudim is located on the pass of an ancient trade road from Hannathon and Sepphoris towards Tiberias and Sea of Galilee.   The site is located on a low ridge between the valley and the Arbel creek. The caravans that passed this ridge required water, food and lodging, which was supplied by this village. Jesus must have passed this site on his frequent travels between his home town, Nazareth, and his base of activities in Capernaum.

The following illustration shows the points of interest. The view is from east to west, and the ancient east-west road that passed near the site is shown on the view. The modern highway #65 passes on the west side, and is  easy to park the car and walk to the site from a gate on the west side. 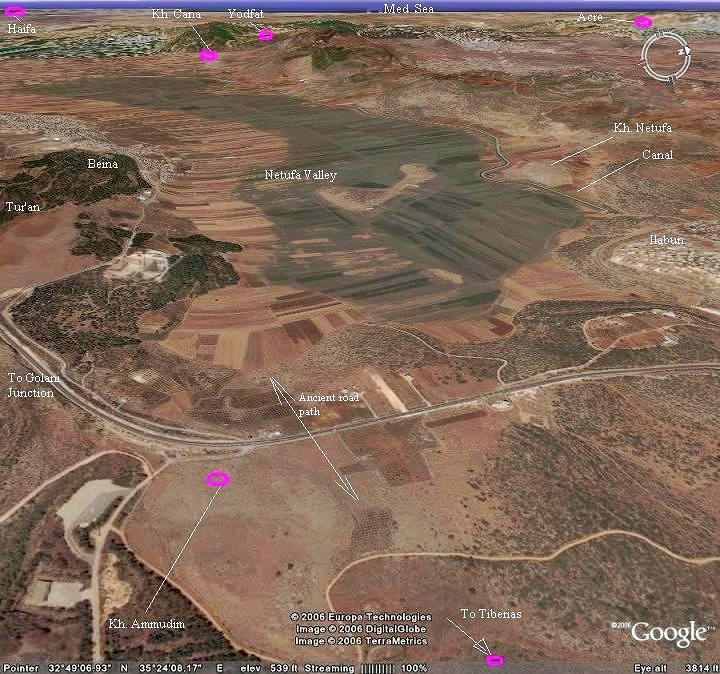 The village was established about the Hasmonean  period (2nd century BC) , peaked in the Roman period, and continued through the Byzantine period (6th century AD) to the  early Arab period (7th century AD). It was part of the chain of villages situated along the main ancient road.

It is not clear what was the name of the ancient village. According to some scholars it was Kefar Uziel.

Conder and Kitchener surveyed this area during the Survey of Western Palestine (SWP), commissioned by the Palestine Exploration Fund (PEF) in 1873. 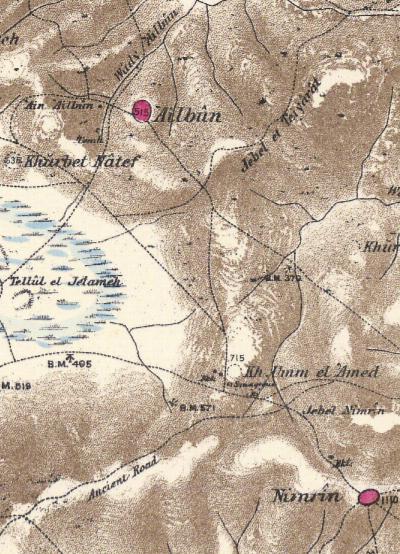 They published a detailed report of the survey, including illustrating the major elements of the synagogue (Volume 1 pp. 406-408):

“Kh. Umm el ‘Amed [“Mother of the column”] – The ruined synagogue stands on flat ground on a low saddle north of the road, south of which is a modern building partly constructed of stones from the synagogue walls. The synagogue was built of hard grey limestone. It is, unfortunately, almost entirely destroyed. The distinctive double column still remains standing in situ at the north-west corner, and the base of one of the columns of a central walk exists on the south, apparently also in situ.

From these data it would appear that the synagogue measured 53 feet north and south from the outer angles of its double columns. The angular direction of the building was due north and south. Part of the west wall remains, showing a stylobate of simple profile, which ran round the building on the interior. The height of the stylobate was 1 foot 4 inches, and the profile similar to that of the pillar bases”.

The building south of the road is about 40 feet square. The north wall is constructed of masonry evidently taken from the synagogue. There are drafted stones with a well-finished boss in the lowest course”. 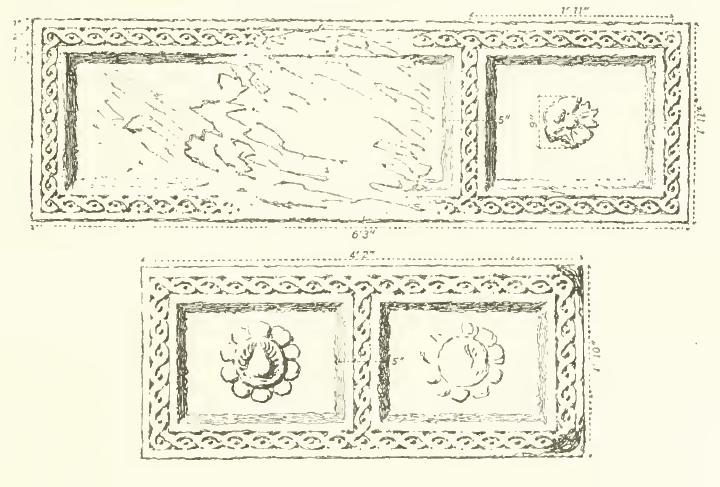 “On the east of the building is a courtyard with drystone walls built of black basalt, into which is built a great lintel with a design; representing two lions facing one another, with an urn between them. The stone has been cracked down the middle. It measures 8’4″ by 2’4″ and it appears evidently to have been the lintel of the main entrance to the synagogue ; while the two ornamented blocks above described were probably the lintels of side entrances. Though differing in length, they are of the same height”.

They added a footnote in their report:

“After describing the synagogue, Guerin says: ‘To the east and at a short distance rises a hillock quite covered with rubbish, and surrounded by fine blocks of stones from ancient constructions. To the west and about 200 paces from the synagogue, one observes a great reservoir half filled in, its form indicated by a range of stones ; its form is semicircular. ‘ To the south of the basin, which was made to catch the rain, are the remains of a strong square building made of limestone, which seems to have been a mausoleum ; but it would be necessary to excavate to be sure of this. The entrance was by two doors, situated one on the east and the other on the south facade. The lintels were ornamented with roses and foliage beautifully executed, but now much broken. Monolithic columns stood on either side of these doors : perhaps they surrounded the whole building with a continuous porch.’

There are other ruins here besides the synagogue. They have been described by Guerin. He found (i) two hundred paces from the synagogue a great reservoir half filled up a range of stones marks out the shape, which was semicircular. (2) South of this basin the remains of a strong square building. The entrance was by two doors situated on the eastern facade, and the other at the south. The lintels which covered the jambs were adorned with roses and foliage executed with some elegance, now much mutilated. Monolithic columns stood at the side of these doors ; perhaps they surrounded the edifice with a sort of continuous portico. This monument is now little more than a pile of confused ruins”.

In the PEF quarterly statement of January 1875 Lt. Conder added other details of this site, of which only the first part if provided here:

“The synagogue is much ruined, and a part has been removed to build a sort of small keep or fortress south of it, near the Roman road. There are, however, traces of four rows of columns, and the plan seems to have been identical with that of others, namely, five walks, three doors to the south, and a double column (as described and sketched in Major Wilson’s paper, Quarterly Statement, April, 1869), at the north end of the two outer rows of pillars. Of these outer double columns the greater part of that on the north-west corner is here standing in situ; the other has fallen and lies near to its original position. The bases of the two most southern columns, flanking the middle walk, are also in situ….”.

He also suggested that this synagogue was one of the 24 synagogues constructed by the 2nd century Rabbi Shimon Bar Yochai.

The site was excavated in 1905, and the synagogue was unearthed.   A stone tablet was found in the synagogue, with an Aramaic inscription, which decorates the synagogue to Joezer the cantor (hazzan) and his brother Simon. 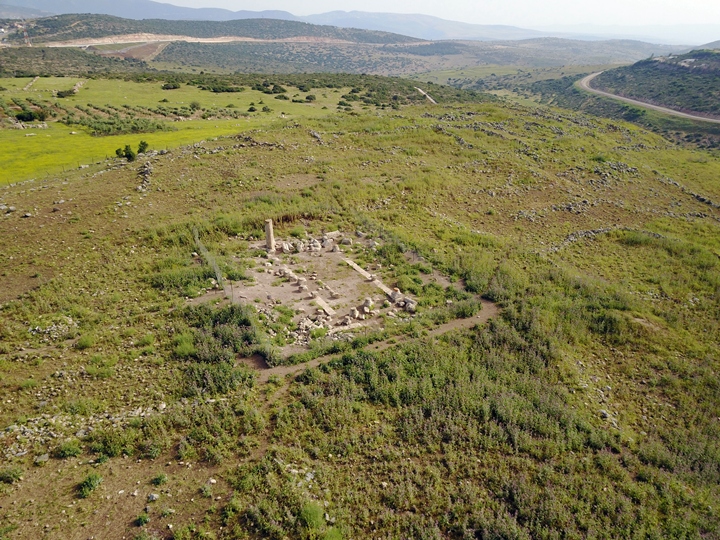 Another aerial view is from the north side of the ruins.  The modern highway #65, seen here passing on the west side of the site, is oriented south to north. 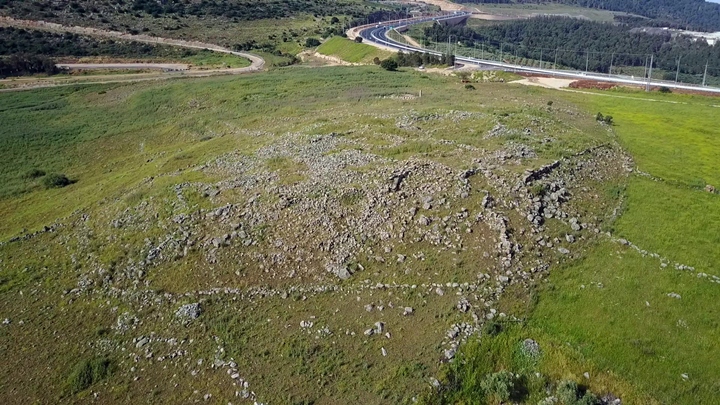 The following YouTube video shows a flight over the site, from south to north and then back:

The following photo shows a general view of the site from the south. The pillar marks the place of the synagogue. 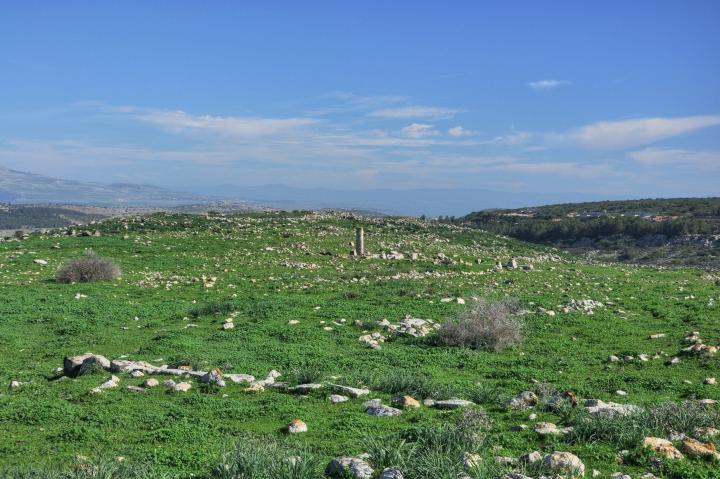 A  view from the eastern side of the site, facing west, is in the next photo. The synagogue is seen in the center. 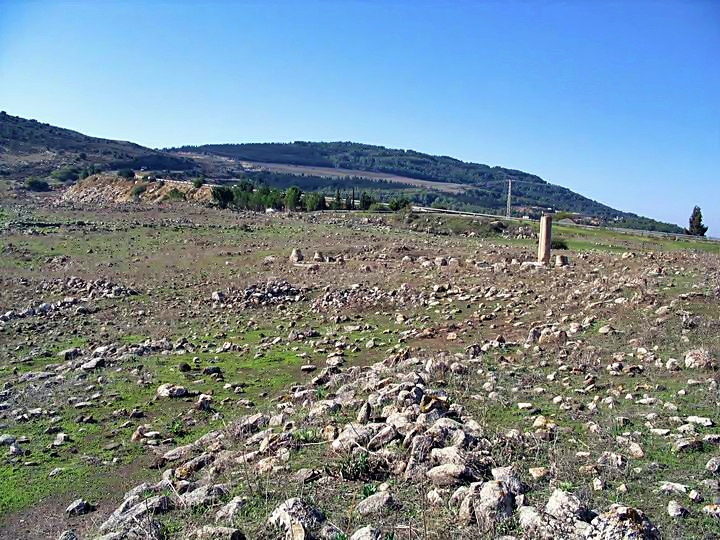 This aerial view shows the synagogue from the south side. 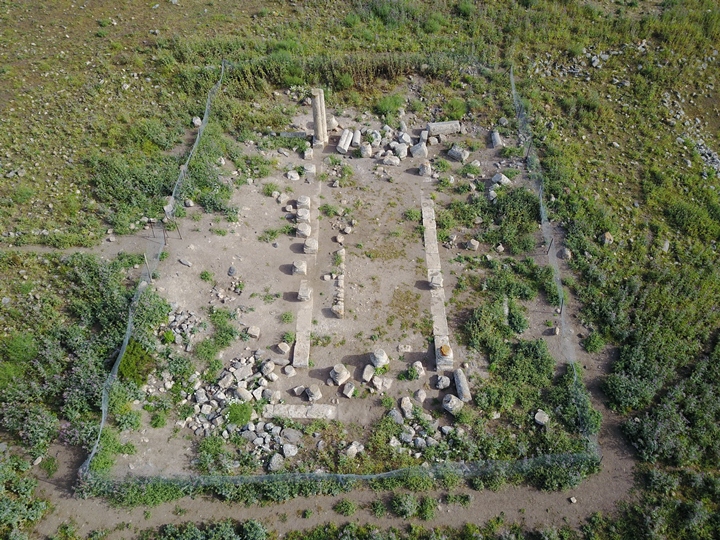 Each pillar stood on a low stone base (38 x 40 cm). The pillar that is left standing was in the north-west corner of the hall.

On top of the central entrance to the synagogue was a large stone, engraved with 2 lions facing each other, and a large vase between their two heads. This stone lies broken in the southern side, where the entrance used to be. 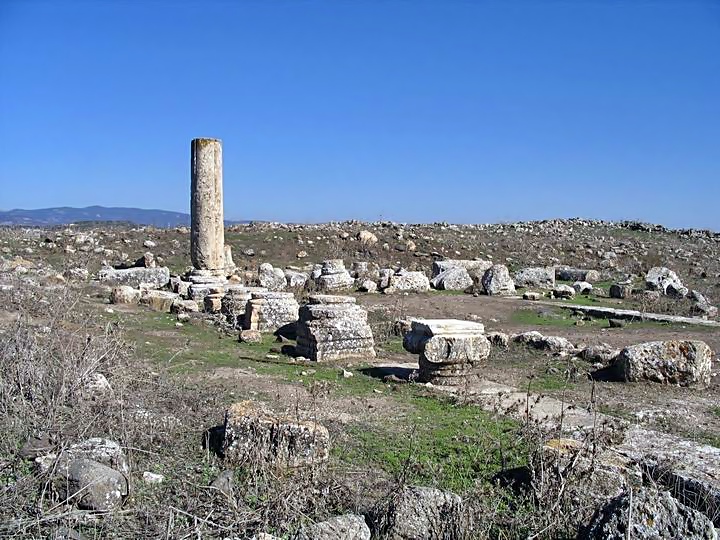 A closer look on the design of the pillar shows a heart-shaped design, which is typical to the Synagogues in the Galilee at that time (such as nearby Arbel). 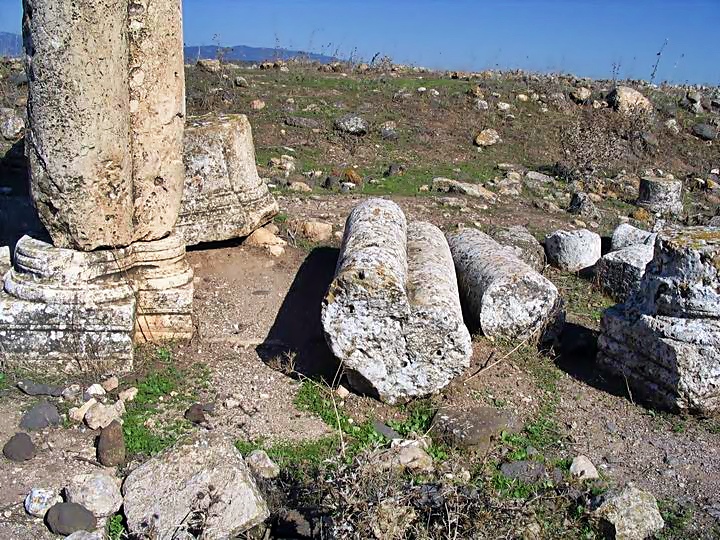 The plan of the columns was illustrated in the PEF report:

Another view of the synagogue is seen here, as viewed from the north side . 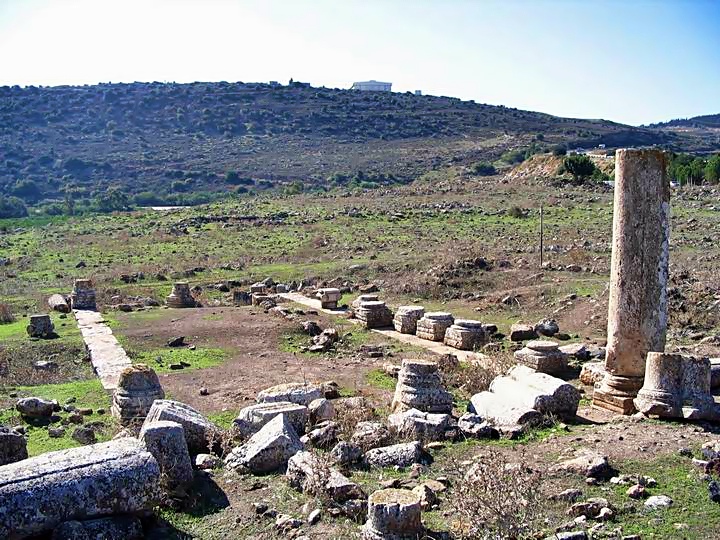 The site is located on a low ridge, on the eastern edge of the Netofa (Netufa, Netopha)  valley. From this side is an excellent view of its northern part. Near these tin houses, used by local farmers, was the route of the ancient road towards Tiberias.

In the background, on the left side of the far edge of the valley, is yet another site from the same period – called Kh. Netofa. Near its hill is an open canal with the waters of the National Water Carrier project, that carries water, pumped from the Sea of Galilee, towards the south of Israel. 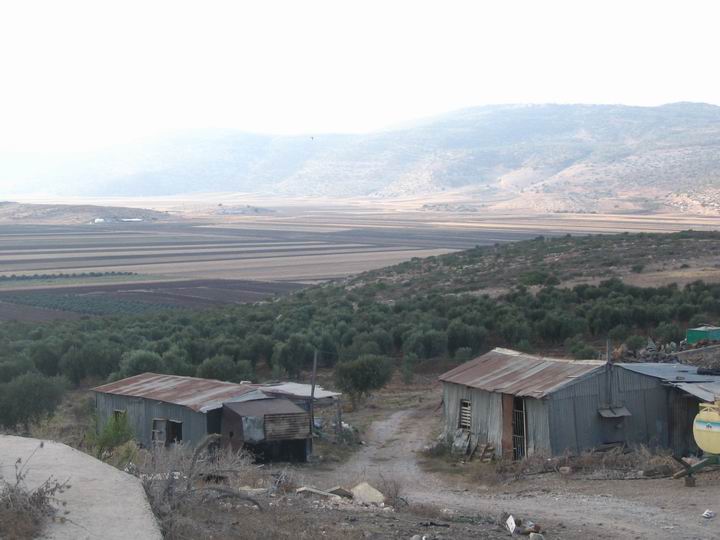 A more recent photo (Aug 2020) shows the same view from a new lookout point along the highway. The green valley was partially covered with water during the wet winter of 2020. 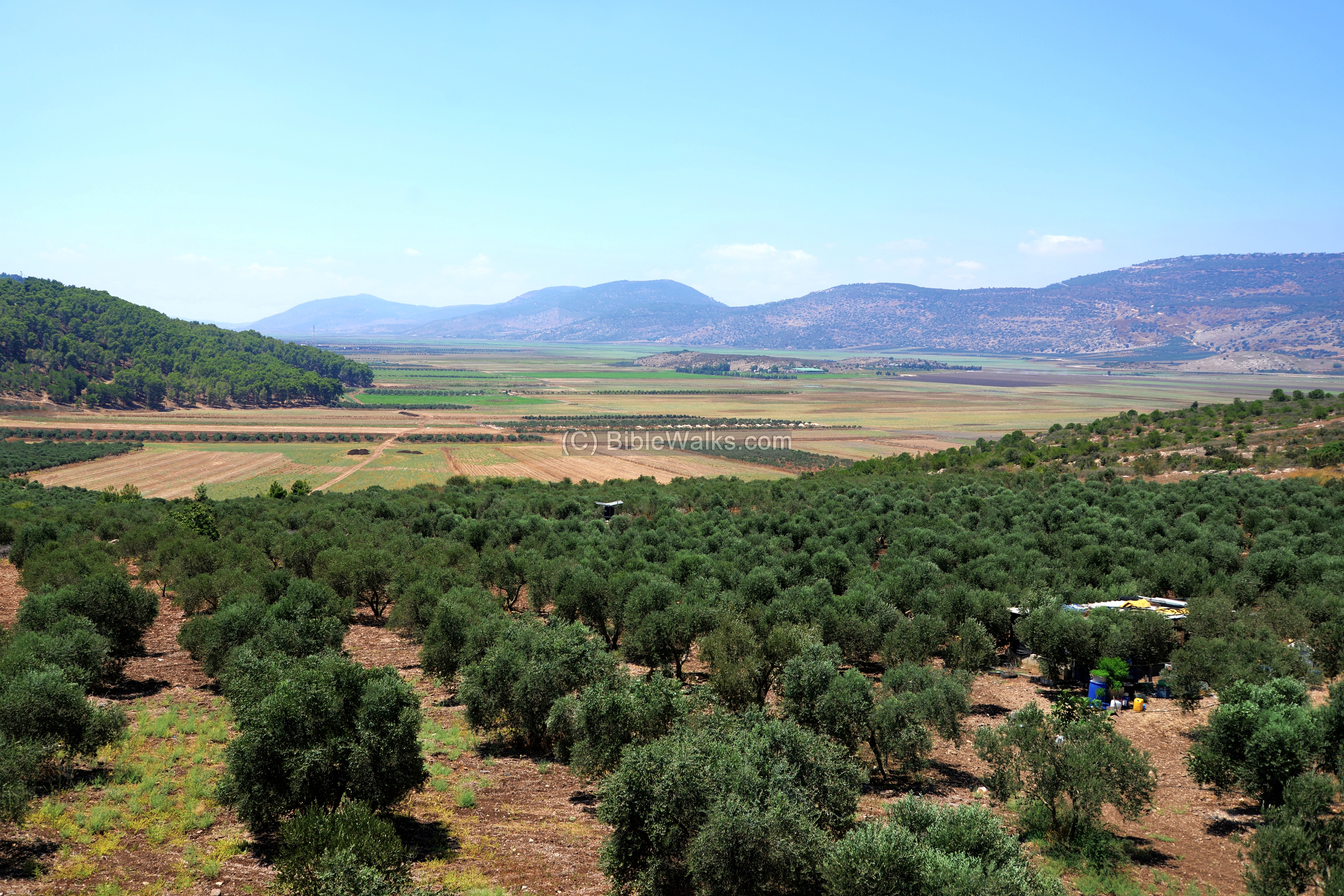 BibleWalks.com – Experience the Bible by foot and compass