Khirbet Cana is one of the most likely candidates for the site of Jesus’s first miracle, turning water to wine. Although the traditional place is in the modern town of Kafr Kanna, closer (6KM) to Nazareth, there are other scholars that favor this featured site.

Khirbet Cana is located on a steep hill in the heart of the wide Netufa (Netopha) valley. On this hill are the ruins of an ancient village from the Hellenistic, Early Roman, Byzantine and early Arab periods. Are these ruins of the ancient village of Cana of the Galilee, the site of Jesus’s  first miracle – turning the water to wine?

John 2: 11: “This beginning of miracles did Jesus in Cana of Galilee and manifested his glory”.

Khirbet (“ruins” in Arabic) Cana is located 4 kilometers from Kefar Manda, 9  kilometers north of  Sipphoris,  and 14 kilometers north of Nazareth. This remote site is accessible by foot or by SUV. The small rounded hill, 70-110 meters high above the surrounding plains,  overlooks the agriculture fields of the  vast Netufa Valley basin. A dirt road leads west to Yodfat (Jotapata),  which is 2.5KM away.

An aerial map below  shows the hill, , indicating the major points of interest and its topography. The access road is seen circling the site from the south and west. 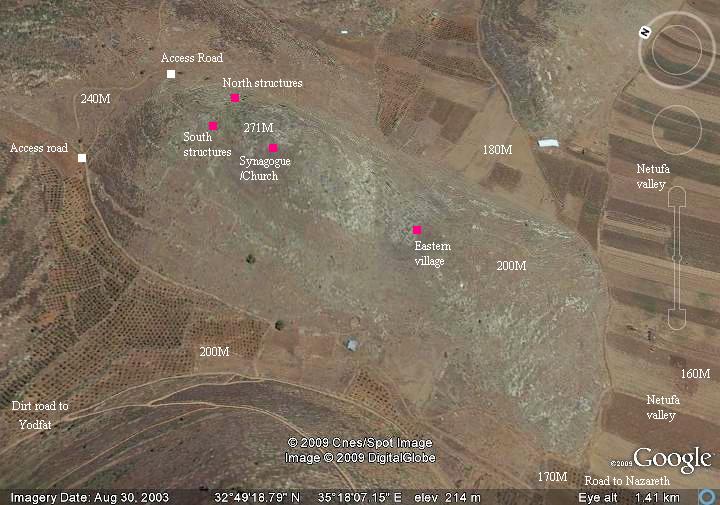 The site was settled during the middle Bronze period (2200 – 1550 BC) and continued until the Iron/Israelite period (1200-732 BC). It is listed in several Egyptian sources: starting in the 19th century Egyptian (12th Dynasty) enemy-curse clay tablets; by Pharaoh Thutmose III (1486 BC), after the battle against the revolting Canaanite cities (one of the 119 cities listed there); in the Amarna letters, a 14th century BC Egyptian archive of clay tablets; in the Royal archives of Seti I, Ramses II and Ramses III.

The city was probably destroyed in 732 BC by the Assyrian King Tiglath-Pileser III, who annexed the area (as per 2 Kings 15: 29: “In the days of Pekah king of Israel came Tiglathpileser king of Assyria, and took … Galilee…and carried them captive to Assyria”). The list of exiles of the King includes a city called “Cana” (listed with 650 prisoners).

The village was repopulated at the Persian or Hellenistic periods. Both Herod and Josephus Flavius camped here. The Roman commander Vespesian destroyed the city in 67 AD, but the most famous site from the great revolt was the nearby Yodfat (Jotapata). The city was rebuilt in the Roman period and expanded to the lower east side during the Byzantine period.

The site is best known as the place of Jesus first miracle, turning water to wine in a wedding, although there are other candidates for the identification of the miracle (see more about this in the bottom of the page). Over the centuries many Christian pilgrims visited the site and possibly built a church or monastery on the top of the hill.

The site is in ruins for many centuries, probably following the Arab conquest. It appears on the PEF map of the 19th century as Khirbet Kana. Recent excavations at the site started to reconstruct its structures.

The photo below shows a view from the Netufa valley, south-east to the site (you can click on each photo to see it larger).  The hill is covered by  traces of ruins of walls and houses, caves, cisterns  and installations.  The ruins are especially visible on the lower eastern slope (mostly Byzantine and early Arabic; seen below on the bottom right side), and around the top slopes (mostly Greek and Roman/Byzantine; hidden behind the peak of the hill in the photo below). 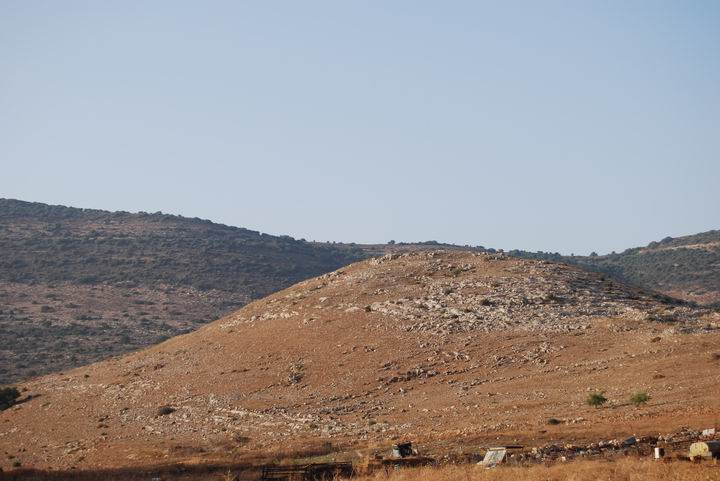 On the lower eastern side of the hill are the ruins of the lower village, which started at the Byzantine period and survived until the 13th-14th century AD. This may have been the place where the pilgrims have dwelt. According to the excavators, this complex have contained the “Church of the Master of the Feast” that was mentioned by ancient writers to be on the pilgrim site.

In the photo below you can see the complex with several dozen of ruined houses on the eastern hillside. The ancient road passes just under the hillside, from left (north) to right (south). In the background are the fields of the Netufa valley. In the far background is the city of Nazareth. 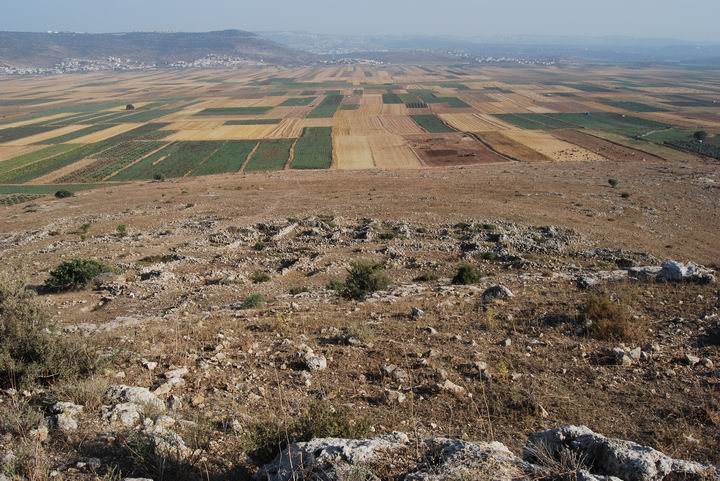 On top of the hill, under many of the houses, are dozens of cisterns that are dug into the stone. They were used both as storage areas and water reservoirs. The water factor was critical for life on the hill, due to the difficulty to fetch the water from the creek or from the valley. They stored the water that was collected from the rain, off the rooftops. The cisterns were also used for hiding places, used in the revolts against the Romans (66/67AD, 131/132, 352). Most of them were inter-connected by tunnels as part of an underground complex. 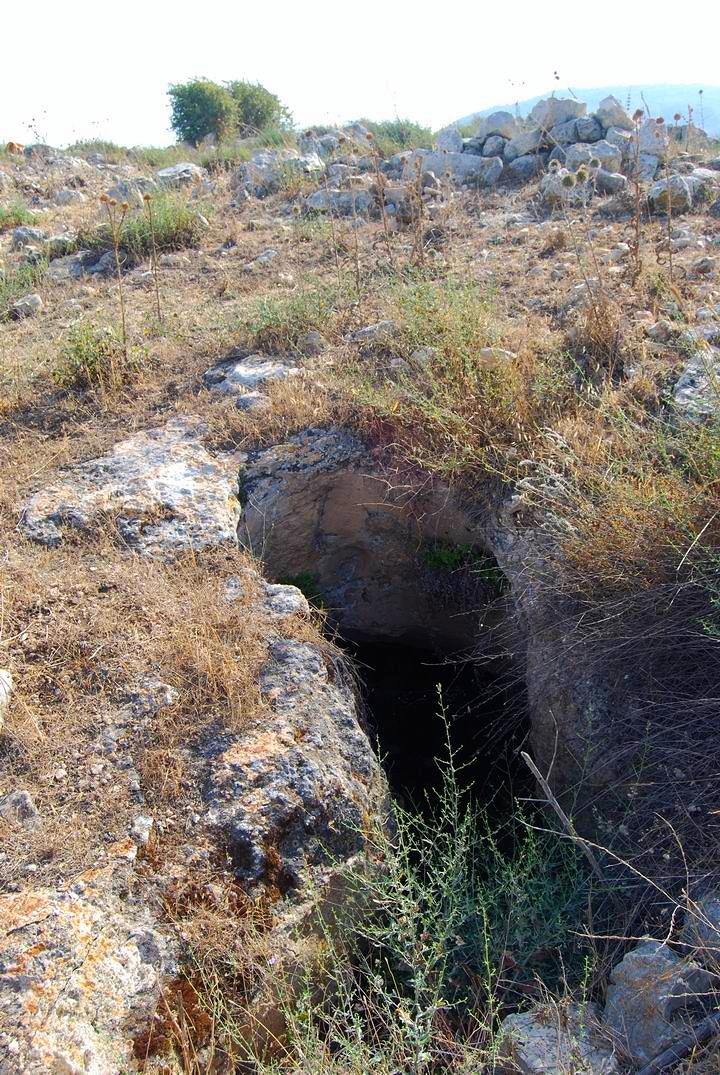 The north and west sides of the hillside are all covered by the ruins dozens of Hellenistic and Roman houses. They are packed one near each other, as can be seen in the photos below. 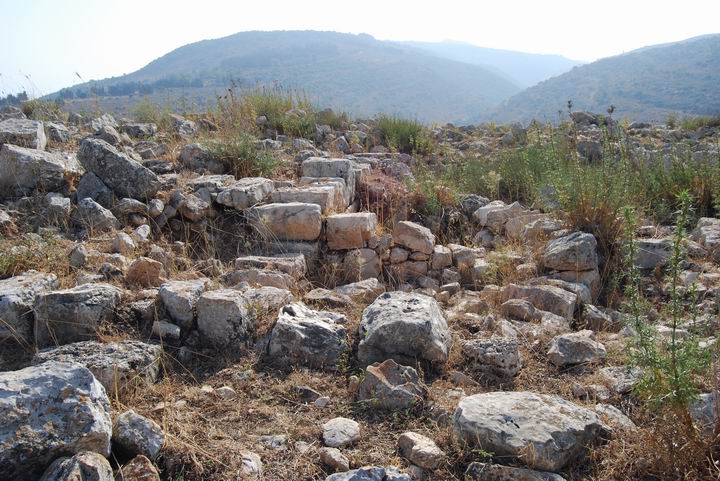 Another view of the same house – but looking north-west. In the background, near the tree, is the jeep road that climbed up the south and west sides, which continues on to the north of the Netufa valley, and may be used to climb up the mountain. 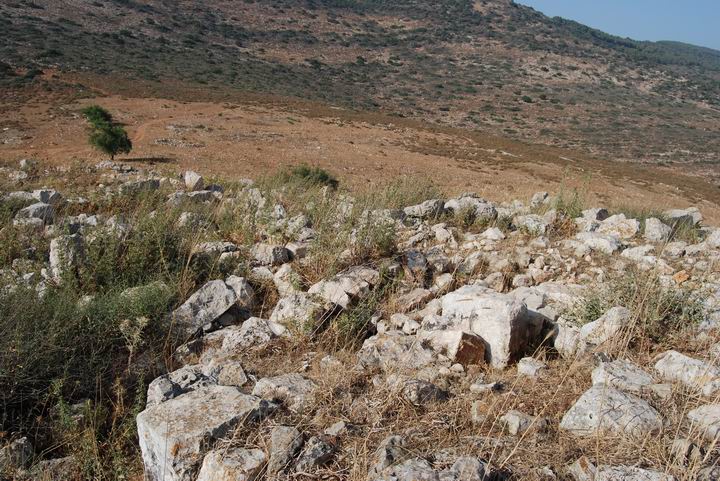 The south side of the hill overlooks the Yodfat (Jotapata) creek, as seen below. On this side are also several levels of ruins of the village, and the houses were packed at several layers down the hillside. 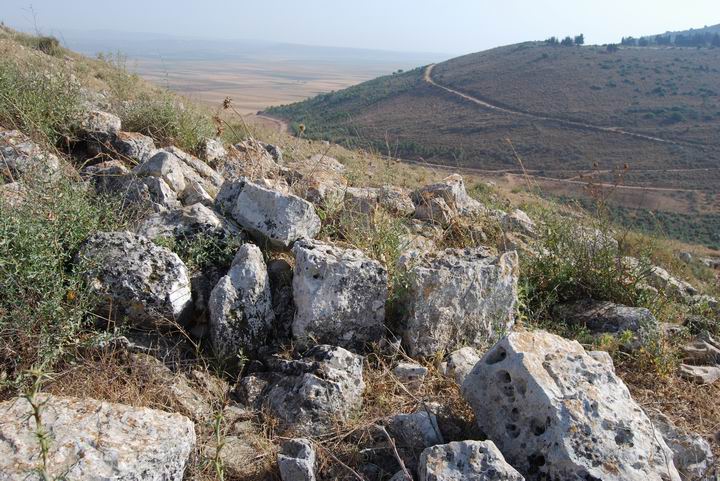 Another view of the walls of the houses on the south hillside. 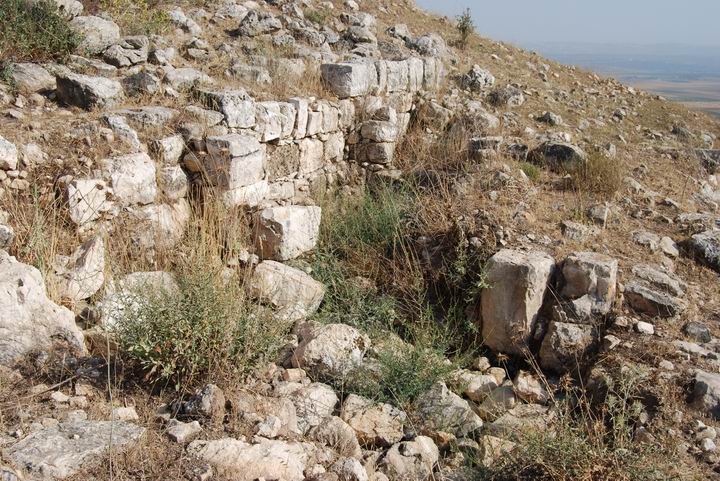 The recent excavations on the top of the hill focused on the south-east side of the hill. Here a large complex (60 x 70M) was found, with monumental columns, cisterns and stone-paved floor. It was probably a Byzantine synagogue,  church or monastery. 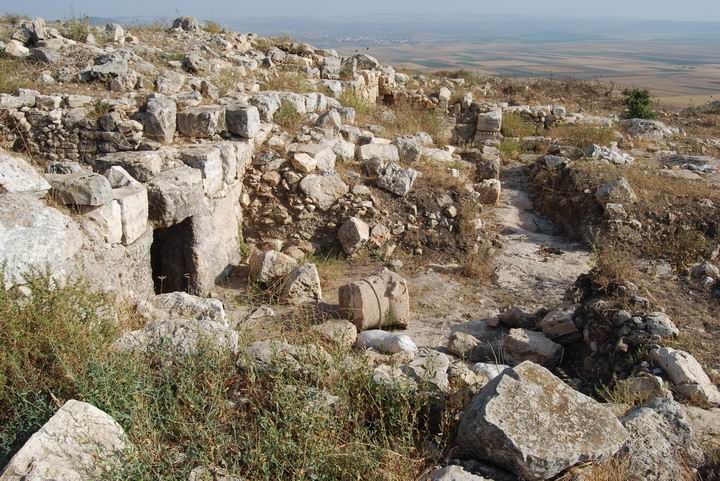 Another view, from the top of the complex, looking south-east. 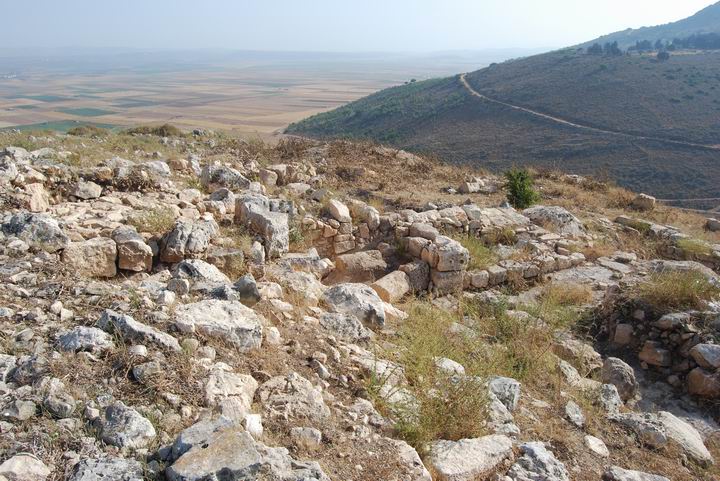 The excavations revealed a “Mystery” cave. Inside, the pilgrims marked graffiti and crosses. Also found were parts of a reused sarcophagus lid and stone containers that may have been part of the pilgrims’ rituals for the water-to-wine miracle. 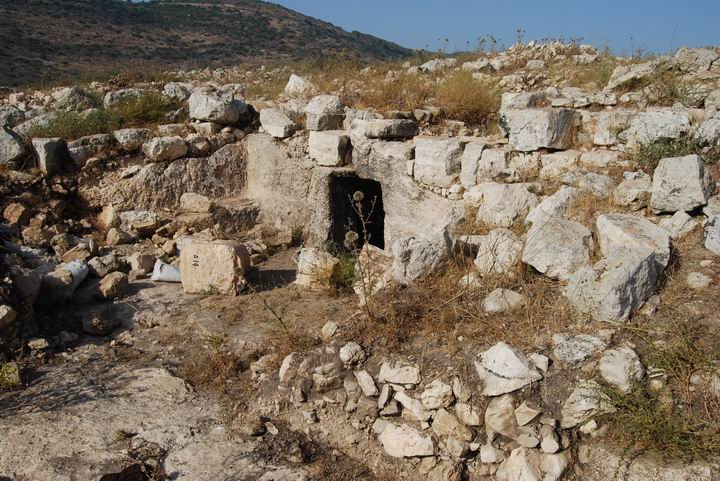 Inside the complex were several parts of a colonnade. In the photo below- a  closer view of one of the fragments. 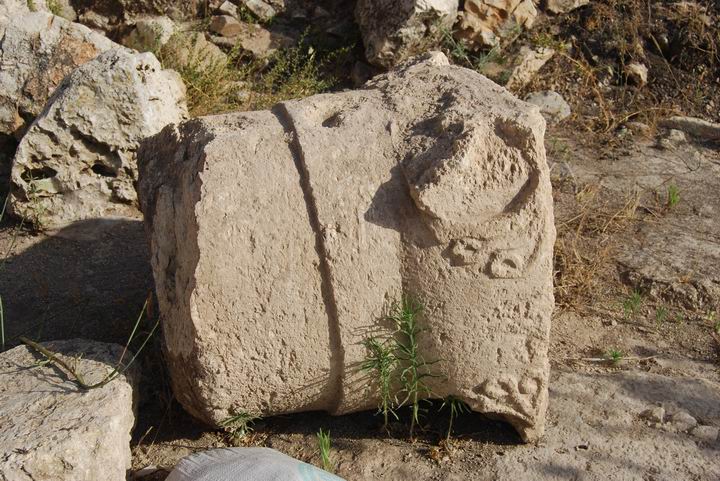 Adjacent the synagogue (or church), seen in the background, seems to be a ritual Baptismal/Mikveh. There are steps at lead to a small pool, as seen below. 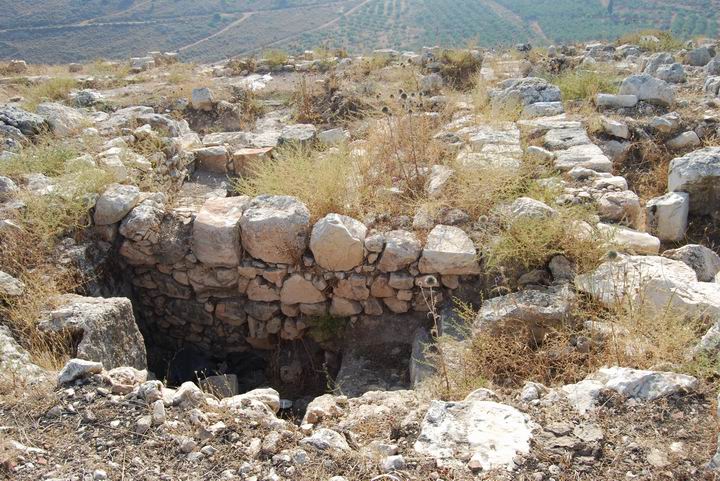 Identification: Is this the biblical site?

There are several arguments that favor Khirbet Cana in the dispute over the true site of the miracle:

Another candidate is Karm er-Ras near the town of Kfar Kanna.

Cana of Galilee is mentioned only in the forth Gospel – John.  According to Hunter [1968] the Gospel of John  is usually accurate with specific locations.

The first miracle at Cana:

“And the third day, there was a marriage in Cana of Galilee: and the mother of Jesus was there.  And Jesus also was invited, and his disciples, to the marriage. And the wine failing, the mother of Jesus saith to him: They have no wine.
And Jesus saith to her: Woman, what is that to me and to thee? My hour is not yet come. His mother saith to the waiters: Whatsoever he shall say to you, do ye. Now there were set there six waterpots of stone, according to the manner of the purifying of the Jews, containing two or three measures apiece. Jesus saith to them: Fill the waterpots with water. And they filled them up to the brim. And Jesus saith to them: Draw out now and carry to the chief steward of the feast. And they carried it. And when the chief steward had tasted the water made wine and knew not whence it was, but the waiters knew who had drawn the water: the chief steward calleth the bridegroom,  And saith to him: Every man at first setteth forth good wine, and when men have well drunk, then that which is worse. But thou hast kept the good wine until now.  This beginning of miracles did Jesus in Cana of Galilee and manifested his glory. And his disciples believed in him”. 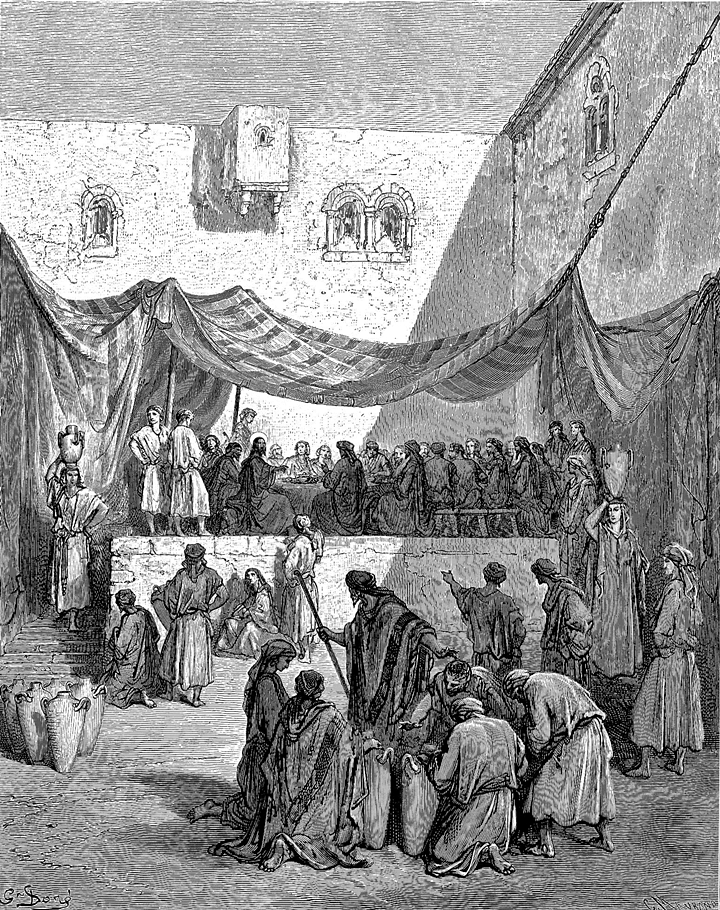 This is the 2nd miracle at Cana:

“So Jesus came again into Cana of Galilee, where he made the water wine. And there was a certain nobleman, whose son was sick at Capernaum. When he heard that Jesus was come out of Judaea into Galilee, he went unto him, and besought him that he would come down, and heal his son: for he was at the point of death. Then said Jesus unto him, Except ye see signs and wonders, ye will not believe. The nobleman saith unto him, Sir, come down ere my child die. Jesus saith unto him, Go thy way; thy son liveth. And the man believed the word that Jesus had spoken unto him, and he went his way. And as he was now going down, his servants met him, and told him, saying, Thy son liveth.
Then enquired he of them the hour when he began to amend. And they said unto him, Yesterday at the seventh hour the fever left him. So the father knew that it was at the same hour, in the which Jesus said unto him, Thy son liveth: and himself believed, and his whole house. This is again the second miracle that Jesus did, when he was come out of Judaea into Galilee”.

Cana is also mentioned as the home town of Nathanael, one of his disciples resurrection:

“After these things Jesus shewed himself again to the disciples at the sea of Tiberias; and on this wise shewed he himself. There were together Simon Peter, and Thomas called Didymus, and Nathanael of Cana in Galilee, and the sons of Zebedee, and two other of his disciples”.

After the destruction of Jerusalem (70AD), the Cohen family of Eliashib came to Canna, according to old Jewish texts. The Eliashib family is one of the 24 families that served in the Temple before it was destroyed:

“The eleventh to Eliashib… These were the orderings of them in their service to come into the house of the LORD, according to their manner, under Aaron their father, as the LORD God of Israel had commanded him”.

The historian Josephus Flavius tells  in his auto-biography that during the first Jewish Revolt against Rome (66-70 AD), when he was a commander of the Jewish army in Galilee, he talked about an armed roadblock on the way to Cana:

“…At the same time also there came forces, both horsemen and footmen, from the king, and Sylla their commander, who was the captain of his guard: this Sylla pitched his camp at five furlongs’ distance from Julias, and set a guard upon the roads, both that which led to Cana, and that which led to the fortress Gamala, that he might hinder their inhabitants from getting provisions out of Galilee.”

His article was published on  May 1  1883 in the New York “Sun”, with the title ” “Holy sites” in the Galilee”, where he tells his readers about his trip to Sepphoris.  He also talks about how the “other Kefar Cana”, several miles north of  Nazareth, whose 120 poverty-stricken citizens established a “Holy site” status in order to capitalize on the pilgrimage, converting from Greek-Orthodox to Catholic as part of the “package deal”. He doubted that it was the real site and points to Khirbet Cana (“Kana El-Jalil”) as the true Cana. Note that he talks about villagers living in those ruins at his time (probably Bedouins?).

The photo below shows a herd of cows grazing in the Netufa valley, just below Khirbet Cana. The rich valley supports hundreds of farmers and Bedouins, as the family that lives in a tent nearby. 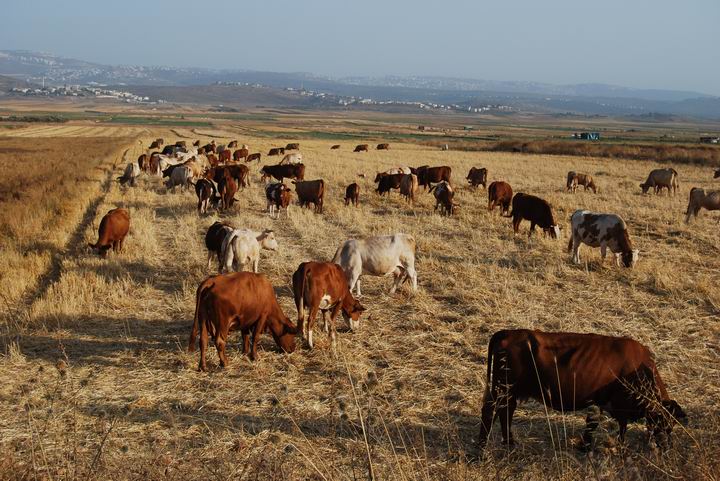 BibleWalks.com – exploring the sites of the Bible