Remains of an ancient multi-period port city, south of the ford of Nahal Hadera river.

Tel Gador (also: Tel Gedor, Tell el-Akhdar) is a multi-period ruin south of Hadera. It is situated on a high (33m) sandstone cliff overlooking a bay.
Sections of the cliff fell down to the sea, chopping away the western side of the site.
The site offers outstanding views of the sea, and a public beach is located on its south side. Remains of a Byzantine period ship were excavated in the bay.
The site is part of the Tel Gador Nature reserve area, covering a stretch of 700 dunams (175 acres) along the coast south of Giv’at Olga, Hadera.

The aerial map shows the location of the site, indicating the highlights of the area. 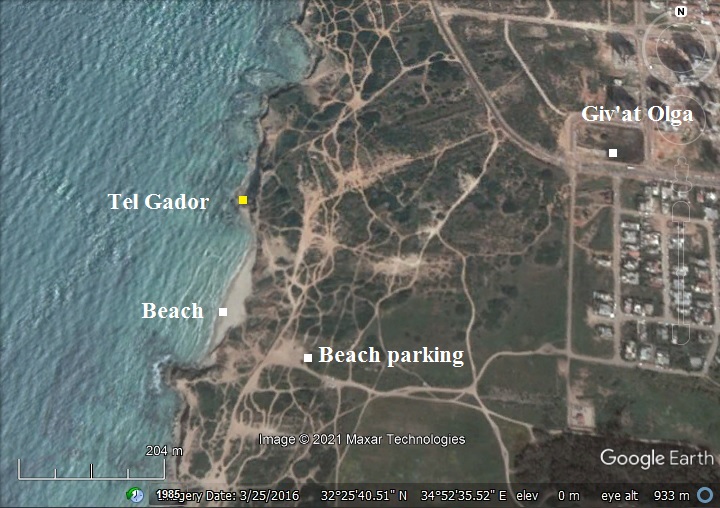 The ancient highway “Via Maris” (Dor to Joppa), later the Roman period coastal road (Caesarea to Apollonia), passed along the sea shore at its foothills. Additional roads connected the site to the east.

Remains of a Byzantine period ship were excavated in the bay.

Close to the edge of the top of the cliff is a base of a small rectangular tower, with 0.8m wide walls, made of Kurkar sandstone hewn stones. Dated to the 6th-8th century AD, later re-plastered at the 9th-10th century, it may have been one of the coastal fortresses and observation towers that were constructed by the Omayyad rulers.

Notice the double dashed line passing along the shore – the route of Via Maris. It is the ancient highway “way of the sea”. 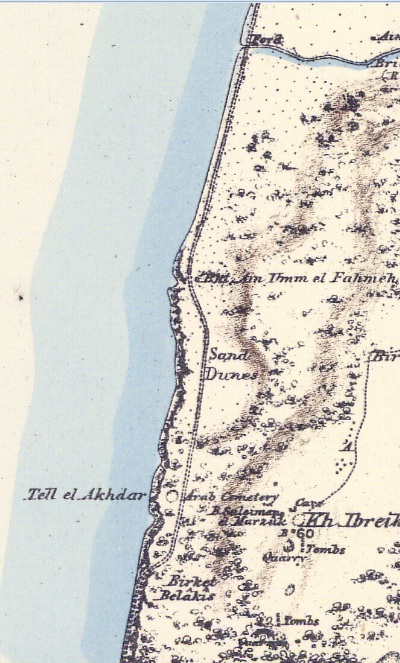 Part of Map Sheet 7 of Survey of Western Palestine,

There are several places indicated around the site-

A 1940s British map shows the site. It is named here: Tell esh Sheikh Zraq. On the 1934 description of the site the survey include: “Ancient remains, marble columns, rough mosaic fragments, surface pottery.

Another name of the site was Tell el Khadra. 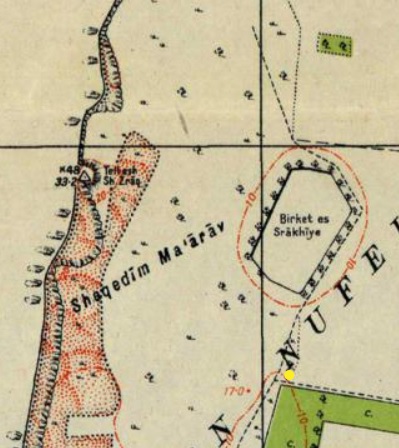 Tel Gador is located in an open public place, part of the Tel Gador Nature reserve area. A popular beach is located in the bay south of the mound. From the parking place is a trail that leads to the site.

Tel Gador is located on a high cliff overlooking the sea.

This view was captured by a drone above the south side of the hill. 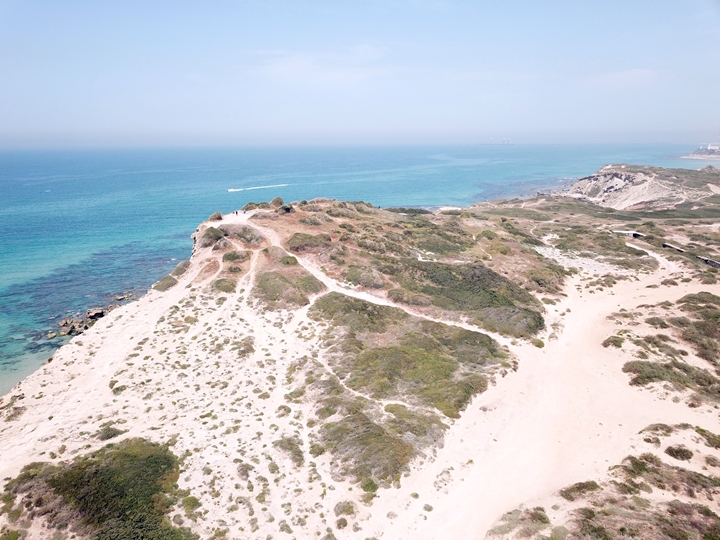 Sections of the cliff have fallen into the sea, cutting off the western part of the ancient site.

In the far background are the residential houses of Giv’at Olga, a western suburb of the city of Hadera. 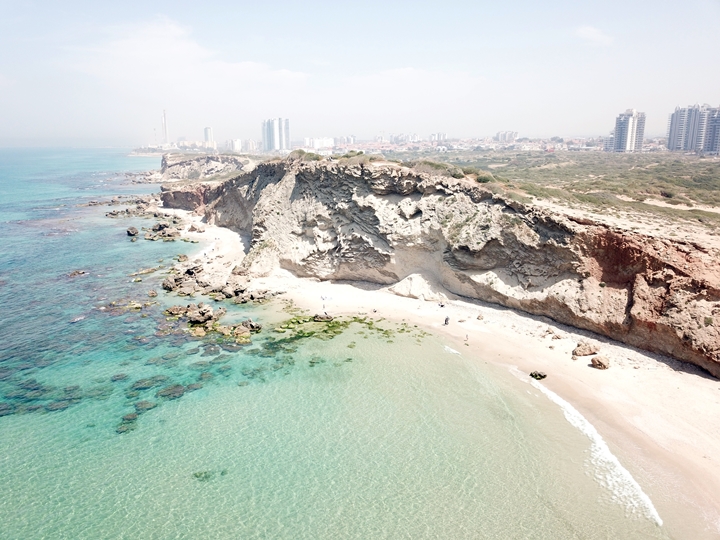 A top view of the site: 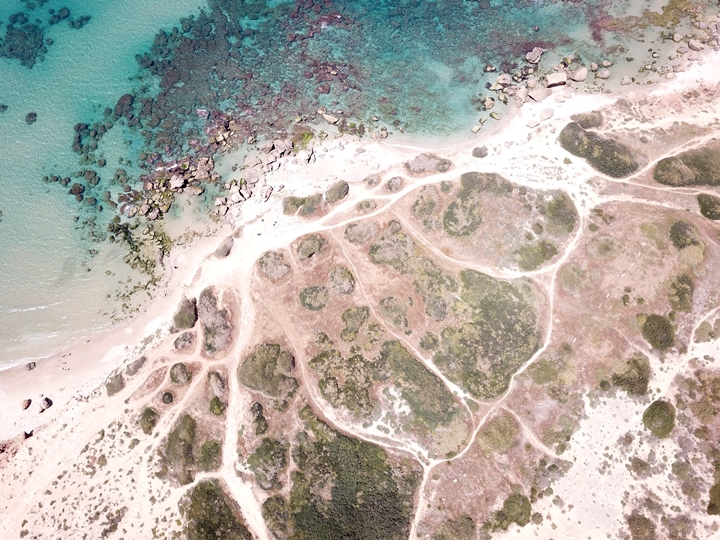 Another view from the north east: 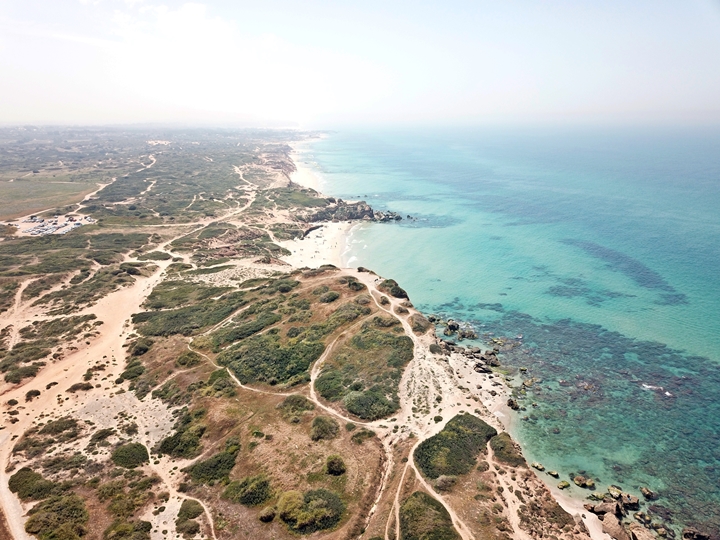 South of the hill is a public beach. 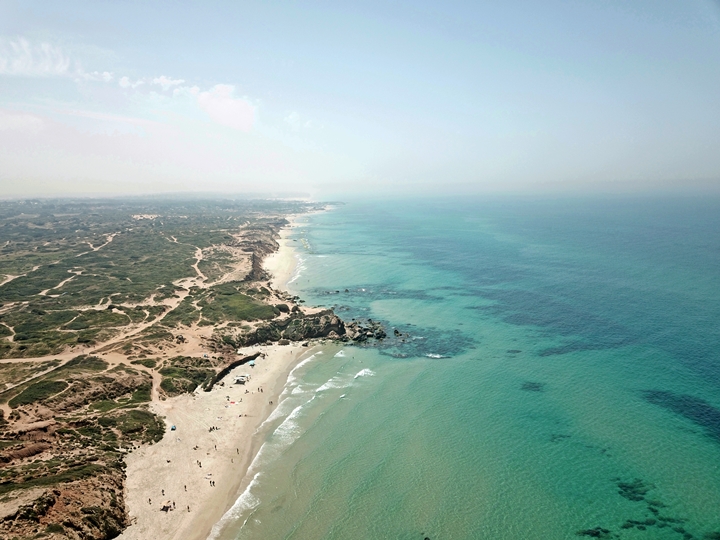 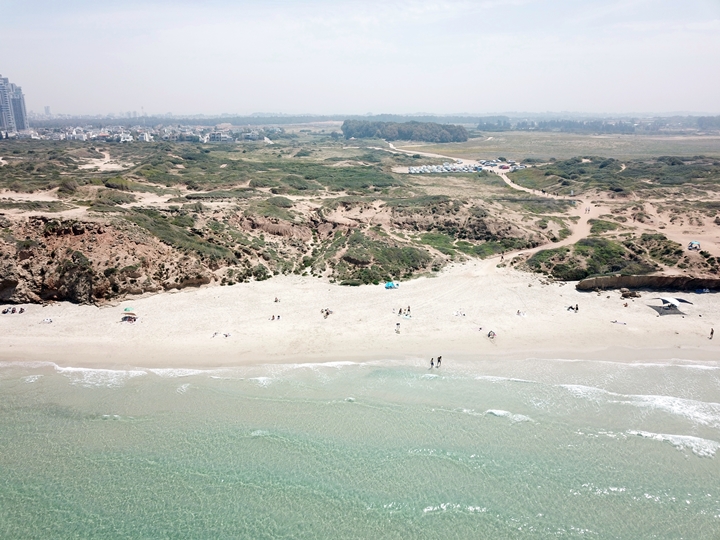 The following video shows a view of the site and its surroundings.

Another take of the drone flight over the site: https://youtu.be/y3Zn6XrGYUw

From the parking lot is a trail that leads to the hill. 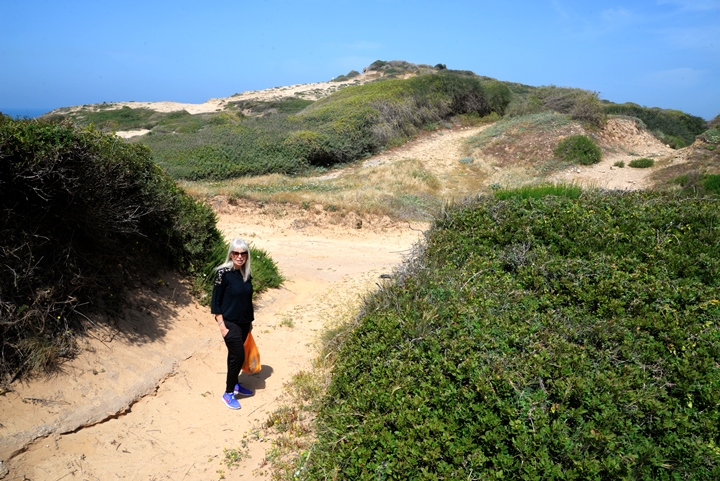 The site is situated on a high (33m) sandstone cliff overlooking a bay. 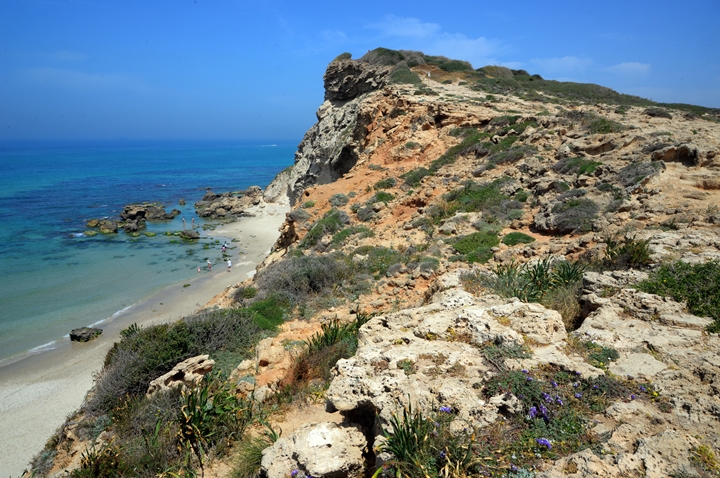 A trail leads up to the summit. Sections of the trail go along the surface of the sandstone rock. 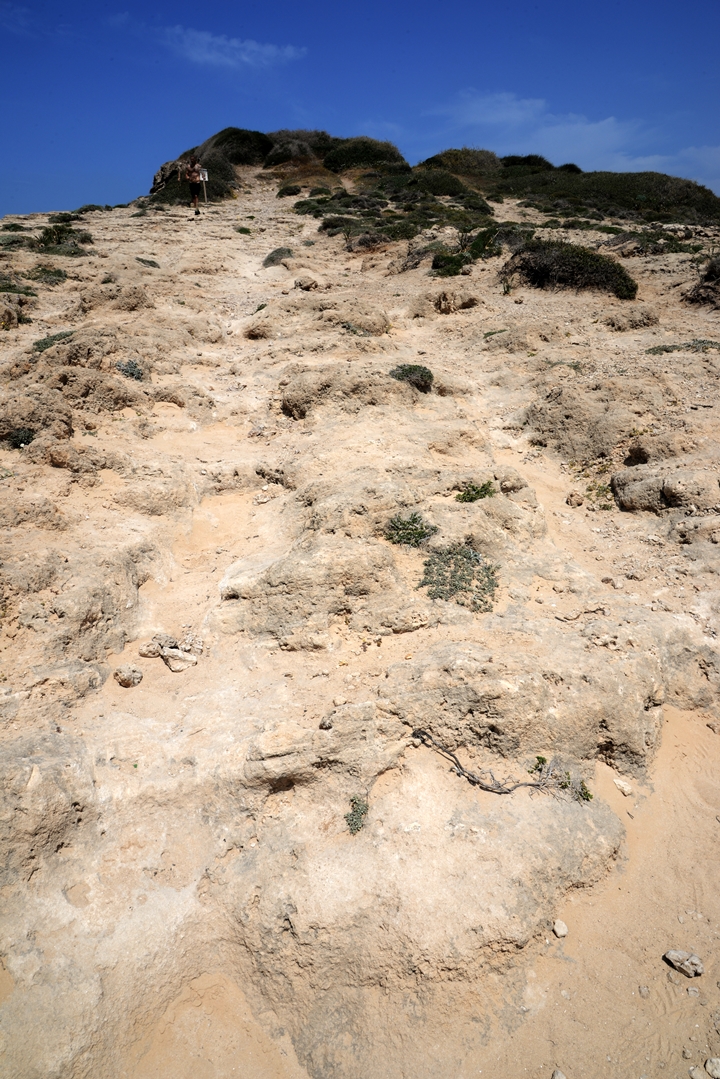 From the summit are great views around the area. The beach is seen here on this southern view. 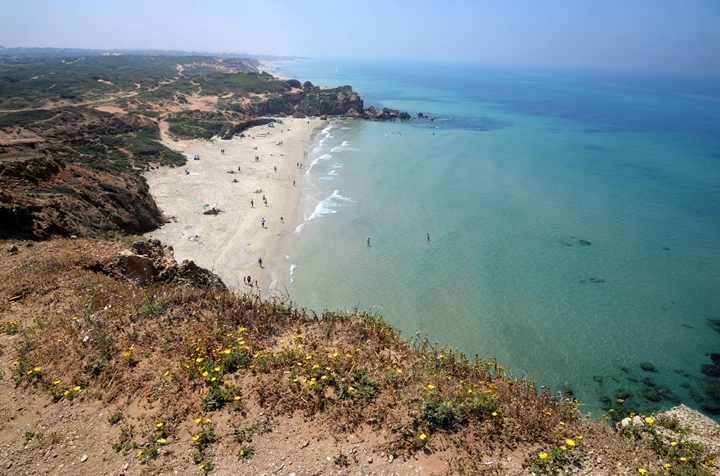 Sections of the cliff fell down to the sea, chopping away the western side of the site.

Take care not to approach to the edge of the cliff. 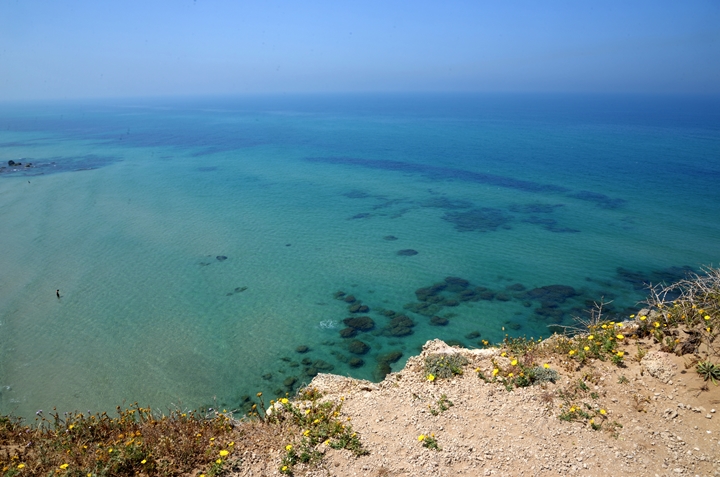 Close to the edge of the top of the cliff is a base of a small rectangular tower, with 0.8m wide walls, made of Kurkar sandstone hewn stones. 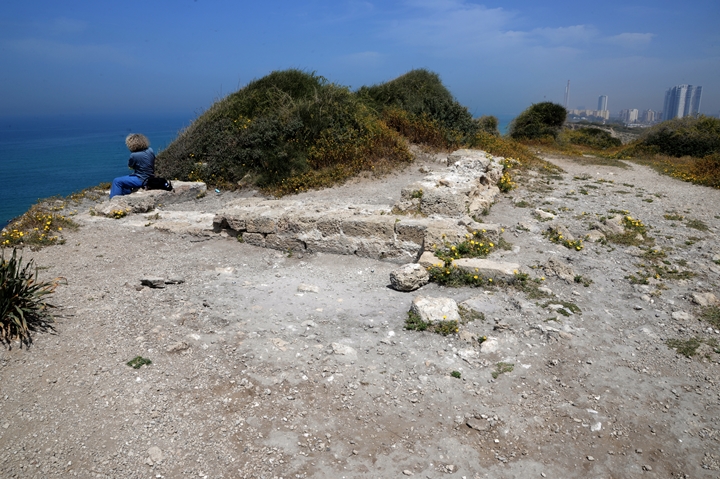 Dated to the 6th-8th century AD, later re-plastered at the 9th-10th century, it may have been one of the coastal fortresses and observation towers that were constructed by the Omayyad rulers. 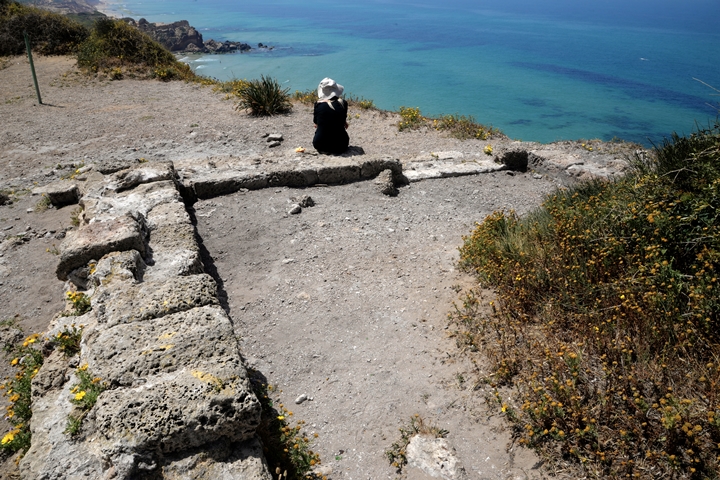 View to the sea: A fisherman stands over one of the rocks at the bottom of the cliff. 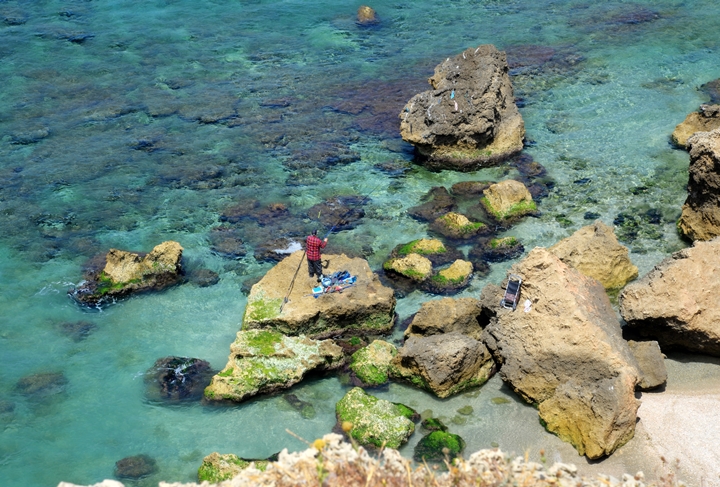 The next view is farther towards the north: 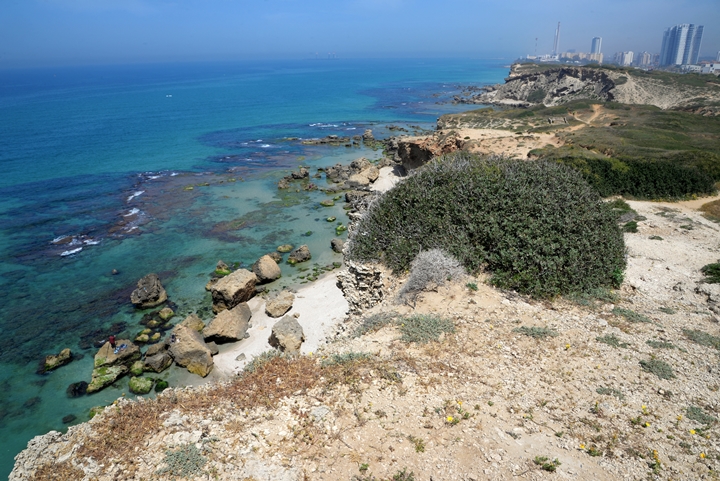 Yet another view of the north is in the next photo. The residential neighborhood of Giv’at Olga is located nearby.

In the far background is the Hadera power station (“Orot Rabin”), with its tall chimneys. The power station, Israel’s largest, was built on the northern bank of Nahal Hadera river, south of Caesarea. It started as a coal based power station. A long pier stretches from the plant into the sea where the coal is loaded from boats. It then was converted to gas, as a rich natural gas field was found in the sea near by. 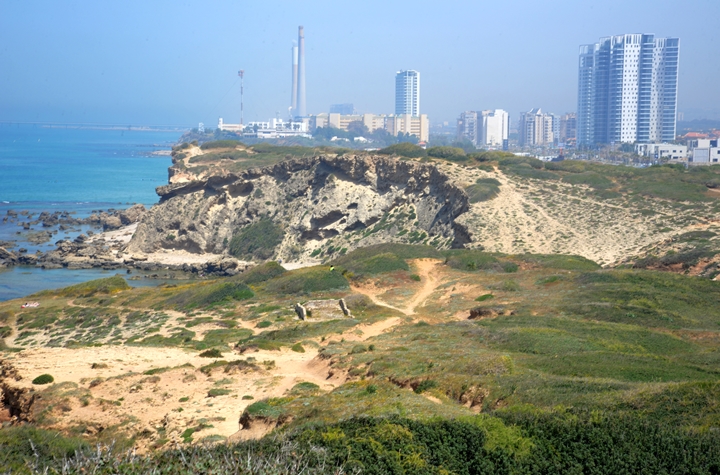 A view towards the east is below. As seen, some come here by foot from the street at the southern edge of the town.

The building at the foot of the hill, as well as protecting sand walls around it, were built during WWII by the British serving as a shooting range. It was later in use by the IDF army, but has been abandoned long ago. 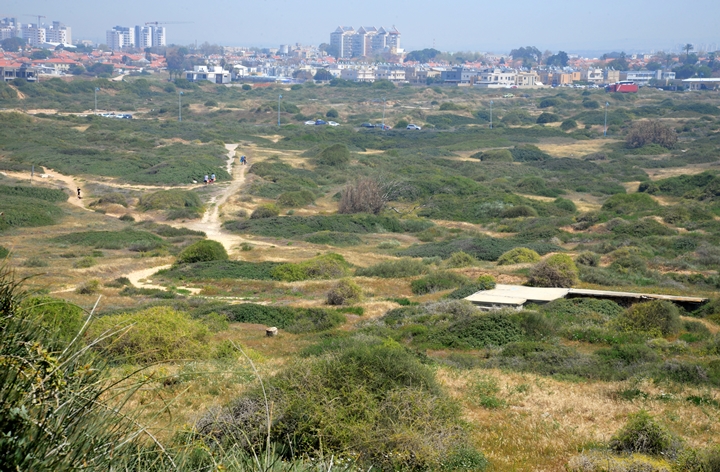 A public beach is located on the south side of the cliff.

The common name of the bay is the “Chinese bay”, named after Jewish immigrants that fled post war Europe in the 1940s to a temporary shelter in Shanghai, China. They eventually settled in Giv’at Olga, and used to assemble and swim in the bay. 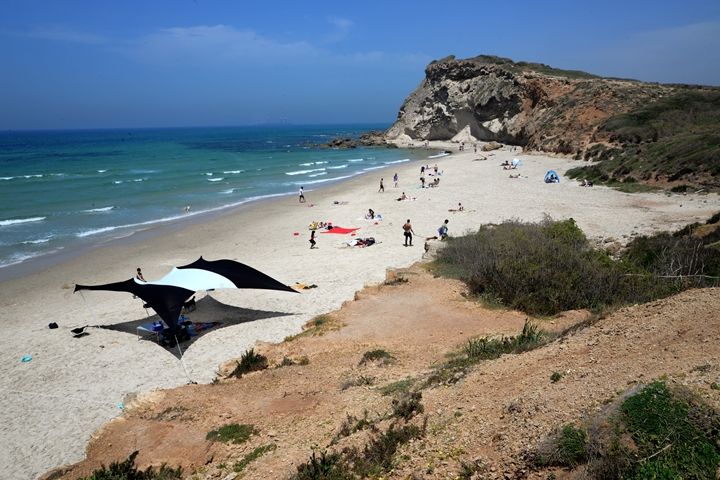 The white sand, the shallow bay, and the imposing cliff, make it ideal for fun and relaxation. 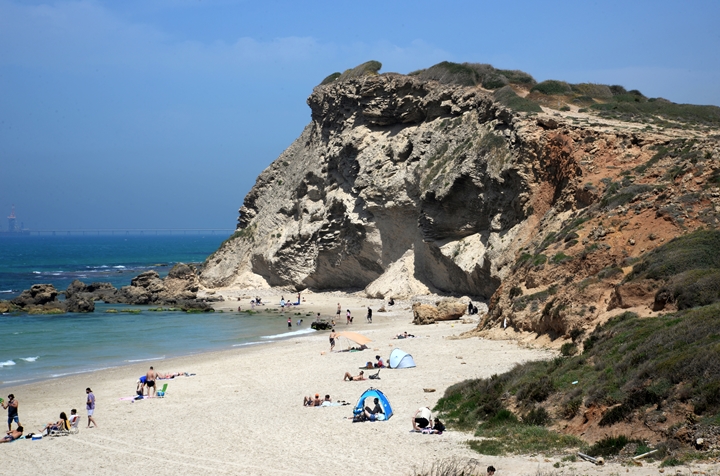 The bay is bounded by a smaller sandstone cliff on the south side. 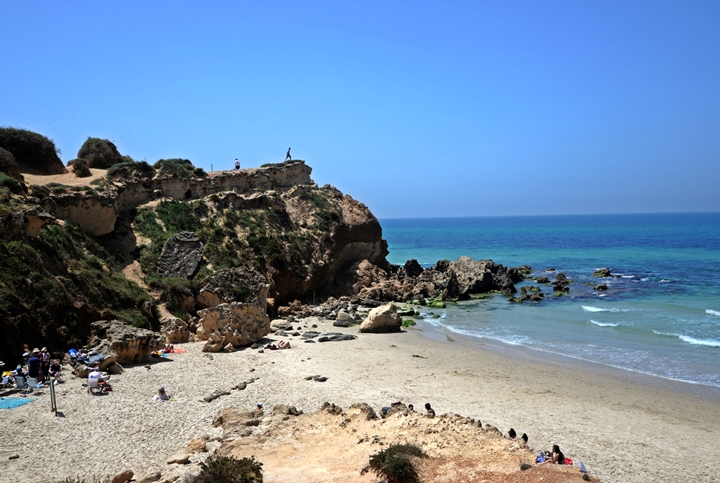 Below – A picturesque view of the ground area near the southern cliff.

This hillside is made of sand and Hamra (loam), and was carved by the waters and wind. 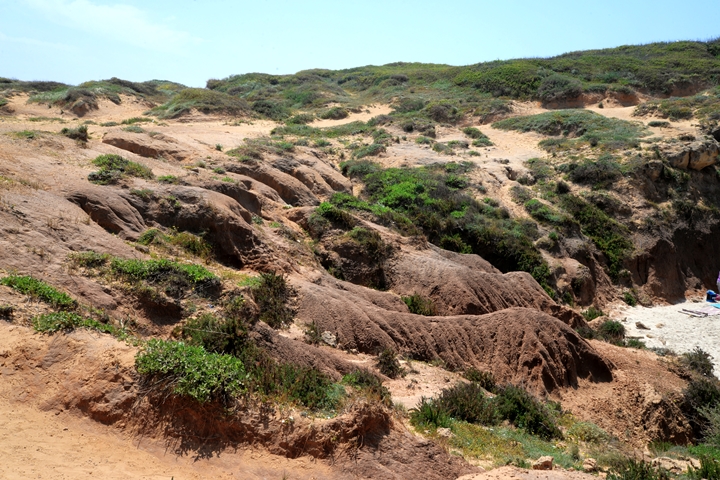 The Cut Leaf Sea lavender (Latin: Limonium sinuatum, Hebrew: Adad Kakhol) are common wild flowers along the beaches. They flower during the late winter to the early summer with colors ranging from purple to deep blue.

The name Ad-Ad means ‘ever lasting’, due to the papery nature of their flowers. 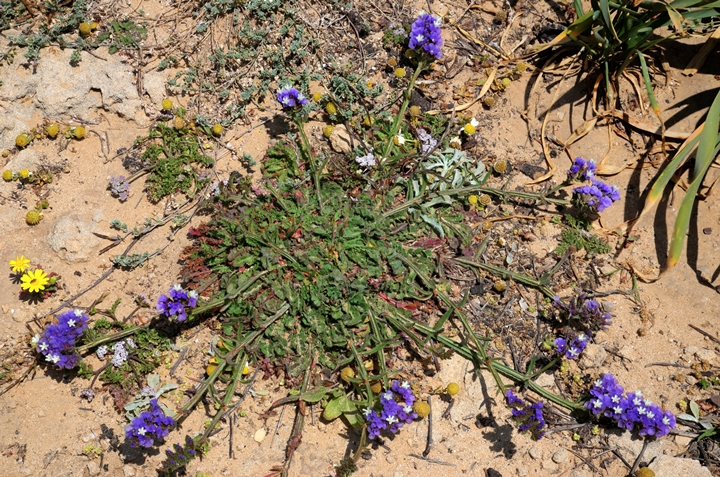 BibleWalks.com – along the shores of the Holy Land