Ruins of an ancient fortified Biblical city, situated on a natural hill overlooking the Yavna’el valley.

Ruins of an ancient Canaanite-Israelite fortified city, situated on a natural hill overlooking the Yavna’el valley in the east Lower Galilee area. The city protected an ancient road that passed along the Adami valley.

An aerial map of the area around the site shows the major points of interest.  Tel Adami is at 164m altitude, 100m higher than the spring of Adami below its foothills.

It is a high drop (230m!) to the valley to the east. Subtracting the height difference, the result is negative 66m, as the area to the east is under the sea level, reaching to -210m on the Sea of Galilee which is just 9km eastwards. 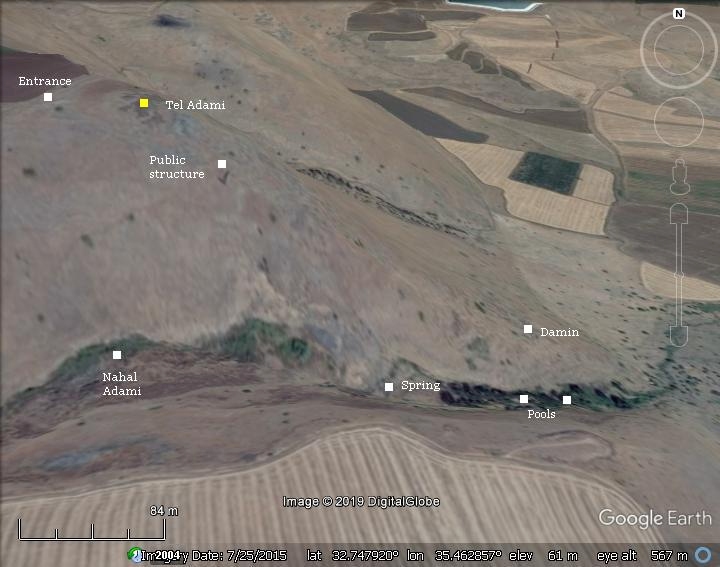 The earliest settlement on the hill was in the Early Bronze (EB) period. The fortifications of Tel Adami were constructed in the Middle Bronze period (16th century BC) by the Hyksos, who built large walls on the western side and built the site on the eastern side of the walls.

The Hyksos (Egyptian for “rulers of foreign lands”) were Semites invaders from western Asia who settled in the eastern Nile delta in ~1650 BC. They took over the rule of Egypt, establishing the 15th and 16th Dynasty in Egypt, and their capital city was Avaris. This city was already populated by other foreign people who migrated  150 years earlier from the Levant to Egypt.

The Egyptians of the 17th Dynasty managed to conquer Avaris and reestablish an Egyptian rule.  It was later incorporated into the city of Pi-Ramesse by Ramesses II in the 13th century. The Hyksos were  expelled to Canaan at ~1550 BC by the Egyptian pharaoh Ahmose I, the first king of the 18th Dynasty.  The Egyptians continued to push them out of the Canaanite cities, with Ahmose conducting at least two campaigns in Canaan. This included a 3 year besiegement of the fortress in Sharuhen (Tell el-Farah?), a city near Gaza that the Hyksos fortified after their expulsion. Sharuhen is listed in the Bible (Joshua 19:6) as one of the cities of the tribe of Simeon and Judah.

There are scholars who relate the Hyksos story to the Biblical accords, due to the similarities: a nation comes from Canaan to Egypt, establish a strong presence there, build cities in the eastern Delta, then return back to Canaan. Perhaps, according to their theory, this event was a nucleus of a folklore that rooted into the Bible of the rise to power by Joseph and the Exodus led by Moses. Other similarities include: the name of the second Hyksos ruler  was Yakubher (a variant of Jacob), and Pi-Ramesse (Avaris) was one of the cities (Raamsses) built by the Hebrews.

The Egyptians eventually broke the military and political powers of the Middle Bronze cities, marking the end of the MB period. Evidence of this mid-16th century destruction can be found in many of the excavated cities.

There are uncertainties how long did the process of the destruction of the Hyksos cities in Canaan take. Some scholars estimated that it was a short period, while others suggested it took a century until the conquests of the Egyptian Pharaoh Thutmose III of the 18th Dynasty.

The city of ‘Adamim’, probably referring to Adami, is listed in Karnak as one of the 119 cities that were conquered by this pharaoh. The conquest was after the famous battle near Megiddo (1468 BC), which resulted in the Egyptian conquest of Canaan for 350 years. 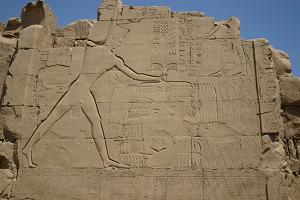 The city continued during the Iron age, and is identified as the Biblical city of Adami, within the area allotted to the tribe of Naphtali (Joshua 19: 33):

“And their coast was from Heleph, from Allon to Zaanannim, and Adami, Nekeb, and Jabneel, unto Lakum; and the outgoings thereof were at Jordan:”.  Nekeb is often associated with Adami, and means in Hebrew: a pinhole, such as was the Adami pass.

The road along the Adami pass (also: Damiya pass)  was one of the major roads that descended to the Sea of Galilee basin. It connected Tel Kishion (at the foothills of Mt. Tabor) from the south, and Hannathon from the west, to Tel Rakkath (ancient city north of Tiberias), and Tel Ubeidiyeh (Beth Shemesh) in the Jordan valley. According to D. Dorsey (“Roads and highways of ancient Israel”, p. 98, route B4) the line up of two Iron Age cities that guarded the pass (Tel Adami and Kafr Kamma) indicates the importance of this route.  This route, parallel to the route near Horns of Hittin (Madon?), made the descent shorter.

The Biblical map shows the two routes that converged in Adami-Nekeb. 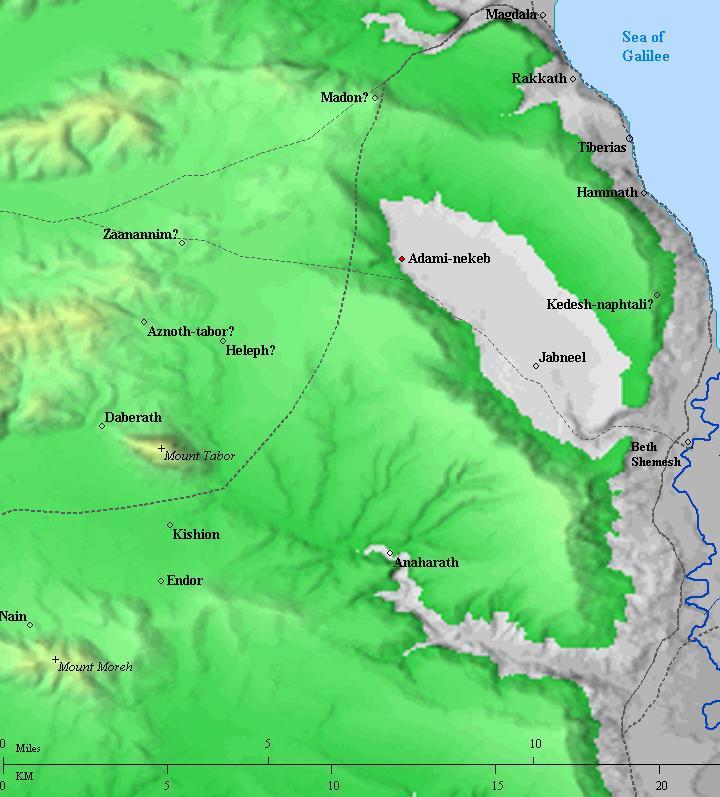 Roads and cities during the Canaanite/Israelite periods thru the Roman period, 20th BC- 1st century AD (based on Bible Mapper 3.0)

The major period of settlement was the Byzantine, when a large 80 dunam settlement (named Damin) expanded 300m to the east, in the valley near the Adami spring. A walled acropolis was built on the eastern side of the hill. A public structure – a church or synagogue – was unearthed on the eastern foothills.

The identification of the site as Adami does not only depend on the Biblical description, but also from the Talmud (compiled at about 400 AD), where the adjacent Byzantine village of  Damin is mentioned in conjunction with Adami  (Yerushalmi, Megila 1:1): “… and Adami-Damin”.

The place was also inhabited during the Crusaders period.

An Ottoman period road (Darb el-Hawarne – way of the Horan) passed in the Adami valley, exporting wheat on camels from the Golan to the port of Acre.

The area was  examined in the Palestine Exploration Foundation (PEF) survey (1866-1877) by Wilson, Conder and Kitchener.  In this section of their map Tel Adami does not appear, but the Roman/Byzantine period ruin does appear (Damieh). The ancient road is marked as a dashed double line, passing to the south of Adami/Damieh.   South of the road, across the valley, is Kefr Sabt. 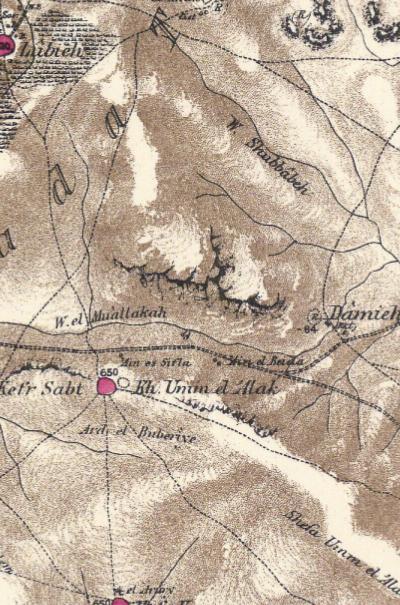 Part of map sheet 6 of Survey of Western Palestine,

“Damieh -Ruined modern houses Built of Basallic stone; round birkeh lined with masonry.  The place may be the Adami of Joshua xix. 33 or the Adamah of Joshua xix. 36. Gue’rin found considerable remains here of modern houses, built of old materials. ‘ On the eastern slopes of the hill the ground is covered with a mass of debris of all kinds, the confused remains of ruined houses. Lower down three springs unite to come out by different conduits into a basin seventeen paces in length, by eleven in breath. Near this basin lie on the ground several broken shafts, which once decorated a building, now completely razed.  -Guerin.”.

They also wrote about the ancient road that passes near Kefr Sabt which is on the other side of the valley (Volume 1 pp. 379-380):

“Another great road runs east and west across the sheet. It runs from ‘Akka to Tiberias. Passing over the low hills south of Rummaneh, it enters the plain north of Kefr Kenna, where it is joined by the road from Nazareth, which also shows traces of antiquity. Passing over the watershed close to esh Shejerah [BW: today’s Ilaniya], it descends to the broad plains on the east. After descending the first step of the series of terraces above Tiberias, near Kefr Sabt [BW: across the valley] the road divides, one branch running straight across the plain, and down the second step, to Tiberias ; the other descending the Sahel el Ahma, and emerging by the pass at its mouth. This is the great road used by the Bedawin and Druses, who bring barley from the plains of the Hauran to market at ‘Akka ; and in the autumn long strings of camels laden with barley are continually seen passing along it”.

In the maps of the survey of Palestine 1927-1948, Tel Adami appears as “Kh. et Tell”, meaning in Arabic the ruin of the mound. To the east of it is Kh. ed Damiya (Damieh in the PEF map), the Roman/Byzantine period village, with pools that collected the waters from the Adami/Damiya spring. The ancient road (Darb el-Hawarne – way of the Horan) is marked as “Tariq Huran” (same meaning). 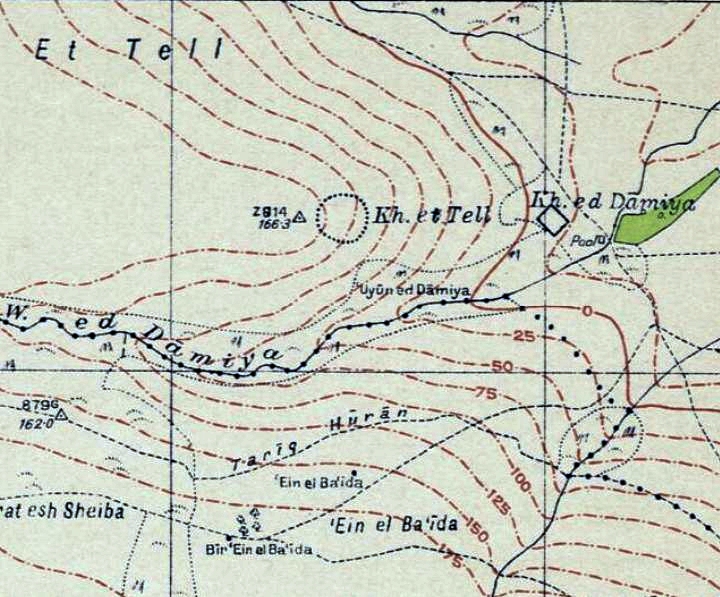 Tel Adami and the sites around it are in a public area – a nature reserve of “Adami heights”. The best time to visit the place is in the fall time after the weeds are cleared out by the cattle.

A drone view from the fields on the west side show a typical silhouette of a Tel – an ancient mound built of multiple layers of destroyed cities. However, this is misleading, as the hill extends downwards to the east and is mostly a natural hill with few layers of settlements.

In the background is the vast and fertile valley of Yavna’el. The valley was also farmed during the ancient times and supplied the city its food and wealth. 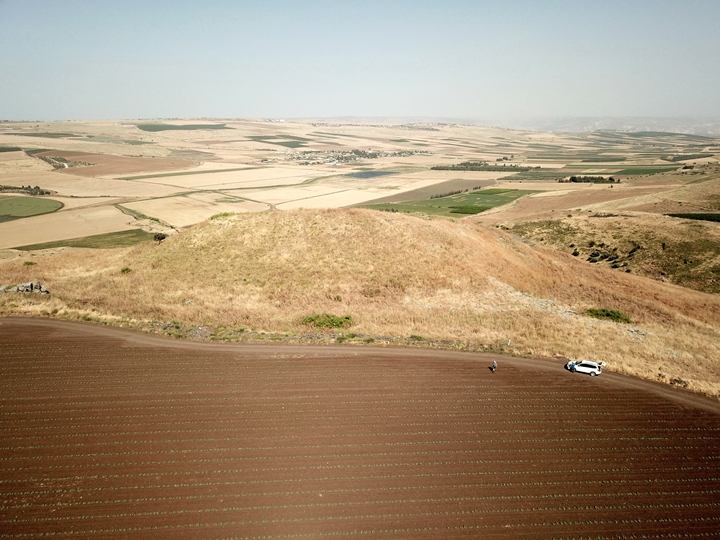 To the south of the site is the deep valley of Nahal Adami stream, as seen in the next aerial view. This was the route of the ancient roads that descended down to the Sea of Galilee on the way north East towards Damascus and beyond. The ancient road passed along the southern bank of the stream. The spring and pools on the east side of Adami supplied fresh water to the caravans.

Notice the round hill in the background. This is Mt. Tabor. During the Biblical times the mountain was a border between three tribes – Naphtali, Zebulun and Issachar. For most Christians it is a Holy mountain – “the mount of Transfiguration”.  Tabor was an important fortress during the First and Second Temple, Greek,  Roman and Crusaders times. 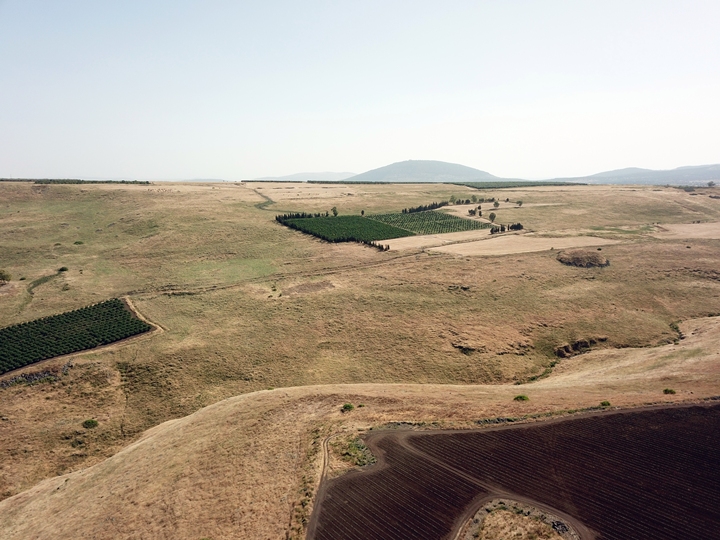 The following YouTube video shows a flight of a drone around the site. The drone starts from the west side above the site, and turns around – north, east then south.

A view of the south west corner of Tel Adami is seen here. Notice the large basalt rocks that were used to build the ramparts that defended the weakest point of the city of Adami – the western edge that connected to the ridge above it. 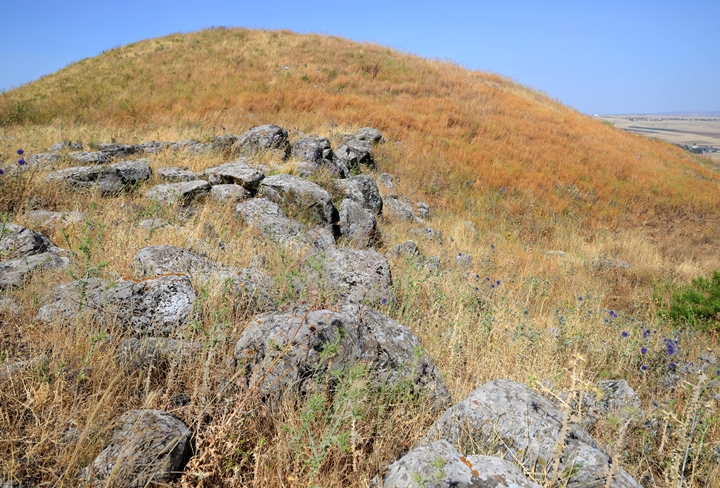 On the other side – the north western edge of the hill – is another line of large basalt rocks that formed the defense wall. 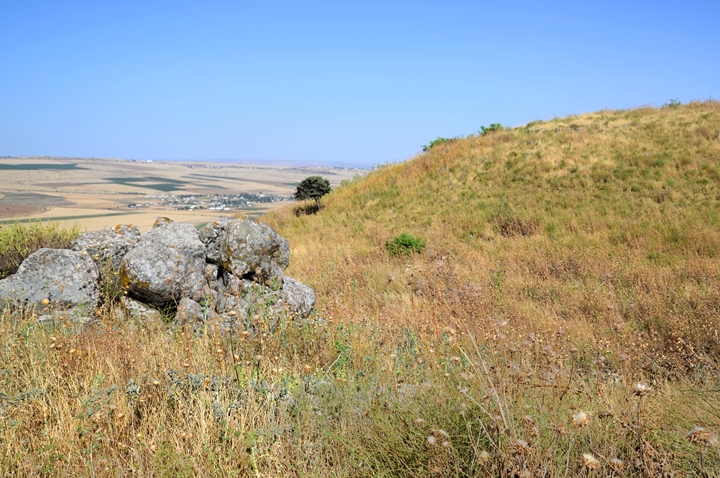 The hill of Tel Adami extends to the east. On top of the hill is a walled acropolis. Remains of the fallen walls are scattered along the foothills. 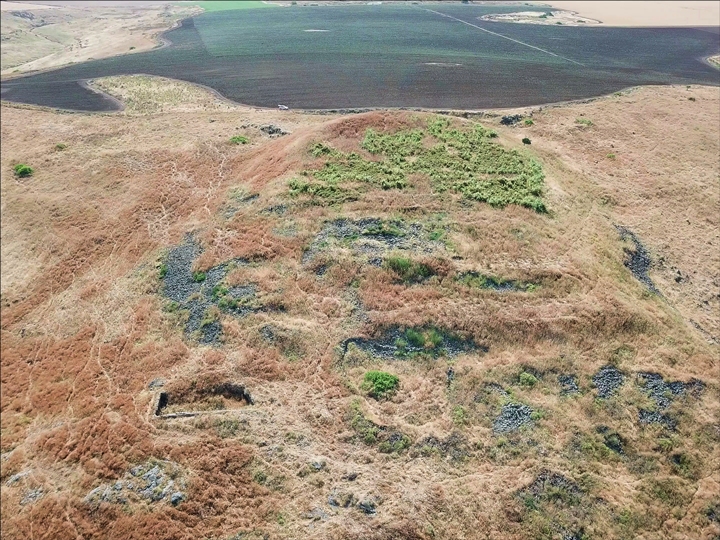 Remains of a rectangular shaped public structure is seen on the southeast side of the foothills. 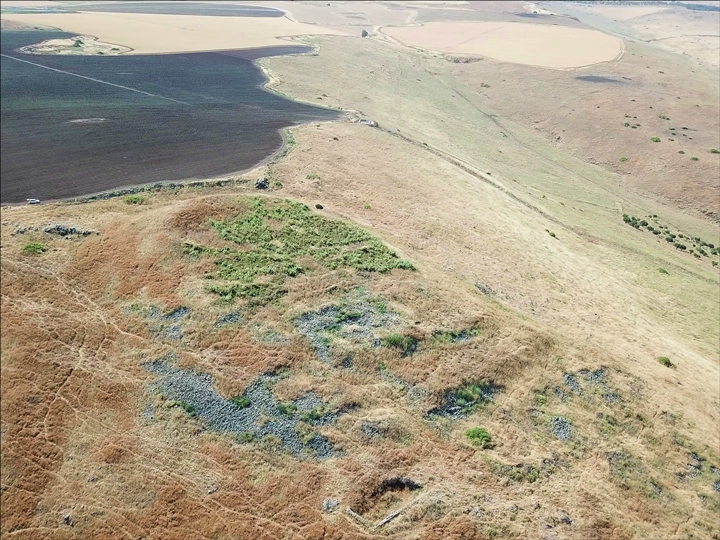 As the hill was totally covered by weeds and was hard to explore, the only visible area was on the field adjacent to  the site. Uncle Ronnie walked along the newly planted watermelon field, searching for ceramic fragments and flint stones in order to date the findings.

Notice the brown hill peeking above the edge of the field. This is the Horns of Hittin, 5.5km to the north. It is an extinct volcano, and due to its twin peaks (“horns”) on each side of the crater it has the form of a bull. A Canaanite and Israelite city were located on the southern horn, perhaps  the site of the Biblical city of “Adamah”. 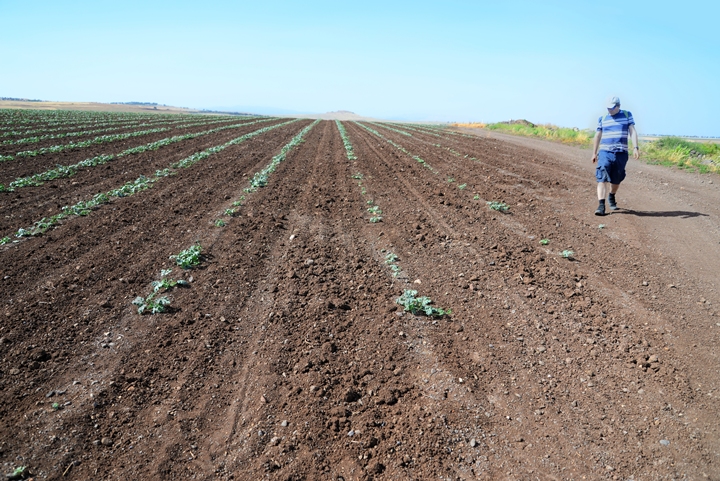 One such flint stone that caught Ronnie’s eye was a Bronze age scraper stone. Scrapers are formed by chipping the ends of a stone, thus creating a sharp side (s). 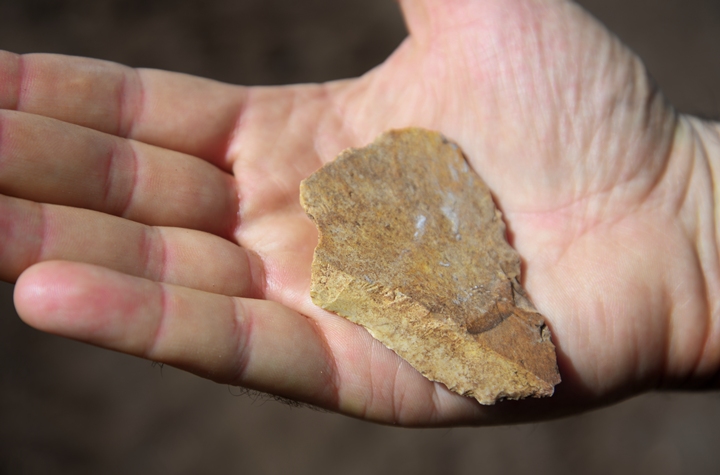