This large and beautiful church is near the Lions gate, and adjacent to the site of the pools of Bethesda. It is one of the few surviving large structures from the Crusaders period.

This large and beautiful church is near the Lions gate, close to the north side of the temple mount, and adjacent to the site of the pools of Bethesda. It is one of the few surviving large structures from the 12th century Crusaders period. It was built over the ruins of a 5th century AD Byzantine church.

The church is dedicated to Anna and Joachim, who according to tradition lived here, and the site where their daughter, Virgin Mary, was born in a cave which is located under the basilica.

An aerial view is seen below showing the location of the church. 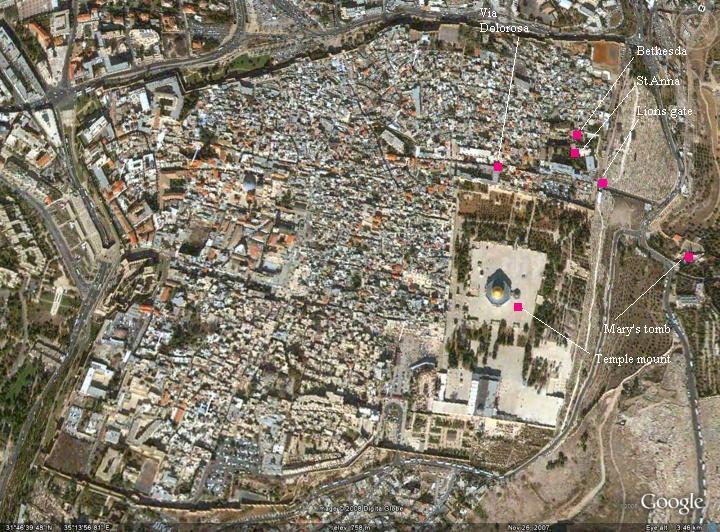 Herod the Great constructed a new water system, making the two pools obsolete. In 44AD Herod Agrippa constructed a new wall, which blocked the water entirely, and so the pools were converted for other use. Until the 5th century the area was converted to a baths center, and a Roman temple was erected.

When Juvenal was Patriarch of Jerusalem (422-458), a large basilica (45M x 18M) was constructed in the area of the pools. It was supported by seven arches, and was built over the dike and pools. It was dedicated to “St. Mary of the Probatic”.

In 614 the Persians partially damaged and burned the structure. It was later repaired, but then totally destroyed by the Arab rulers in 1010.

The Crusaders rebuilt the ruined Byzantine church after conquering the city in 1099, and added a chapel above it. It became a monastery.

In 1140 a large Church was built in a new site south of the pools, where the present Church stands today, and above the caves which were according to Crusaders tradition the birthplace of Mary. It was dedicated to St. Anna, Mary’s mother.

In 1192 Saladin captured the city and converted St. Anna to a school. Later, during the Mamelukes period, the school was a famous institute.

The Ottomans let the structure decay, and only in 1878 the church was returned to Christian ownership, under French management. 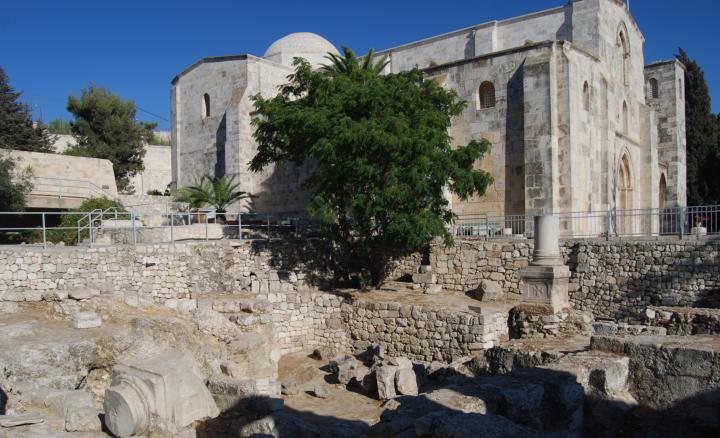 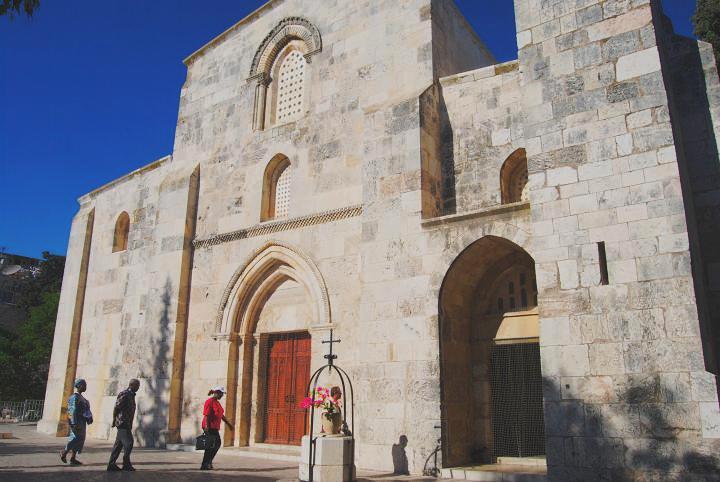 The door at the center is seen in detail below. A 5-line Arabic inscription, dated to 1192, tells about how Saladin, the conqueror of Jerusalem, converted the church to a school. During the following Mamlukes period, the school was one of the most famous institutes. 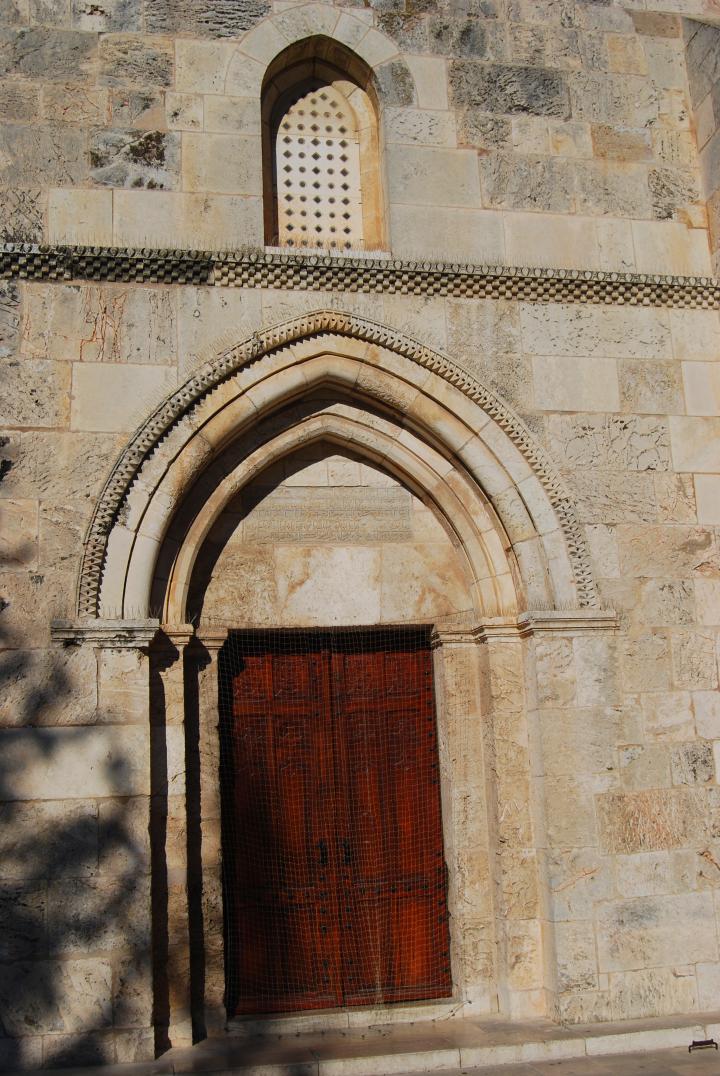 The side door is seen here behind the well. A net covers the entrance, and a small stuffed crow is located on the left lower corner in order to scare away the birds. 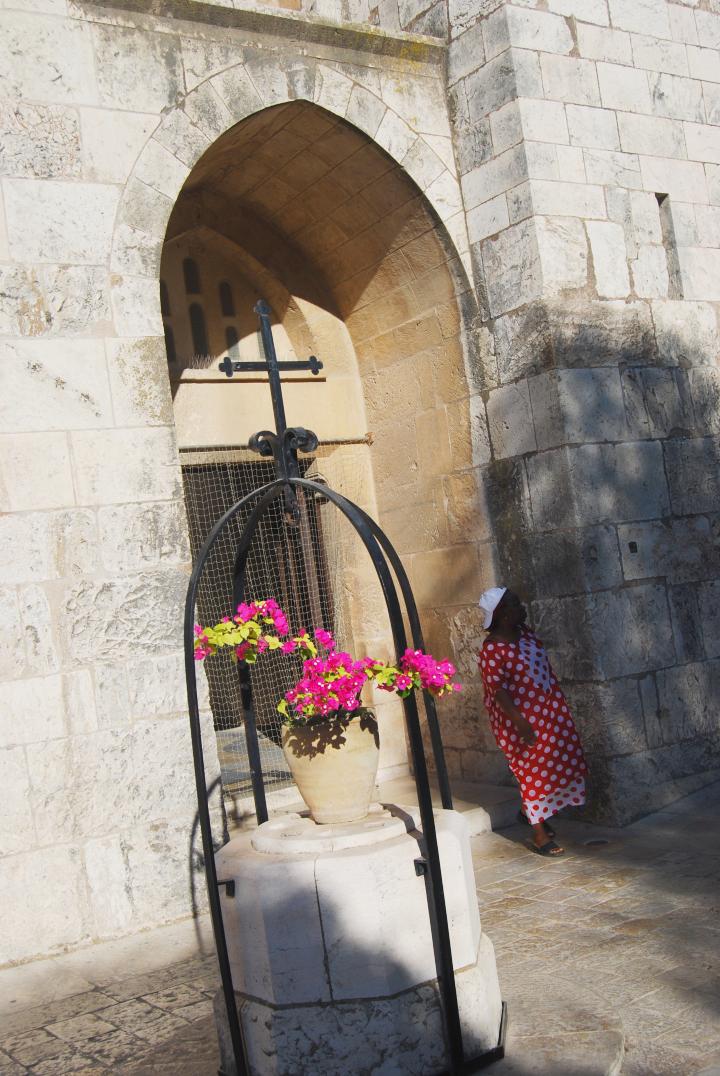 The  structure is based on three halls of the same size, separated from each other by two rows of columns, each with a base shaped as a cross.  The base of the north and south walls and its columns are part of the Byzantine church, while the rest of the structure is dated to the Crusaders period (12th century). 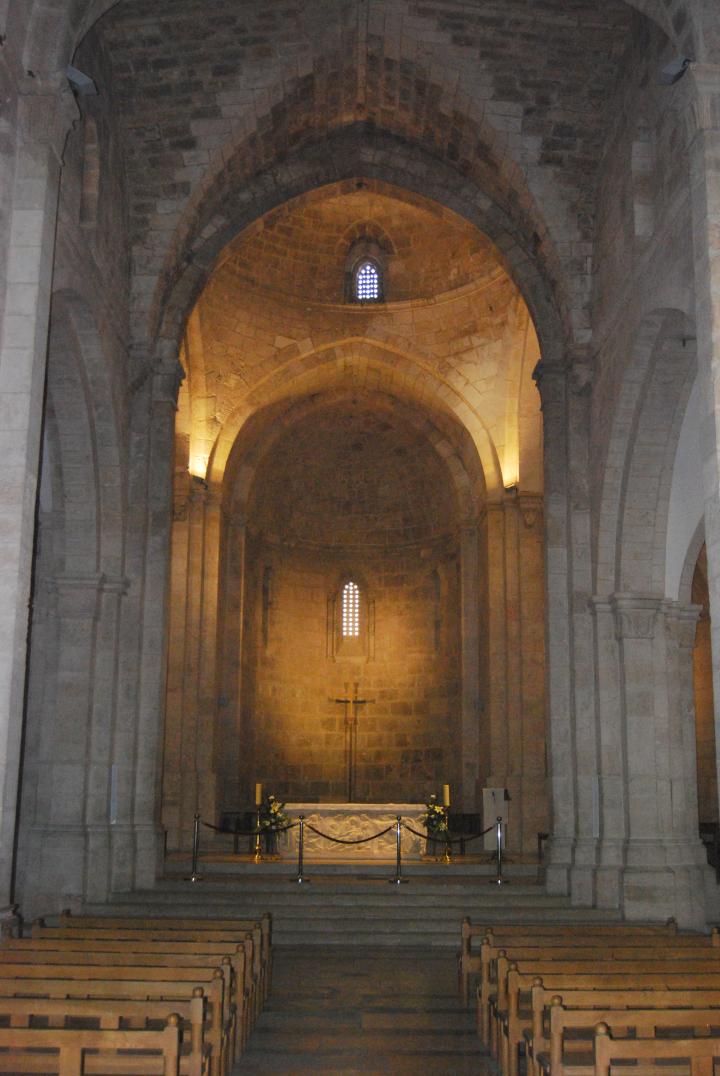 The raised main altar is located in the center round apse, and there are two smaller round apses on each side. Above the altar in the center apse is an eastern window. Higher, in the third floor, another small window is slightly off-center – to symbolize the fallen head of Jesus on the cross.

On the south side of the hall is a staircase that leads to the crypt. It was originally a cave, which according to an eastern Crusader tradition it was the birth place of Mary. In the photo below the natural surface of the cave is seen on the right side, while on the left is an altar dedicated to Mary. 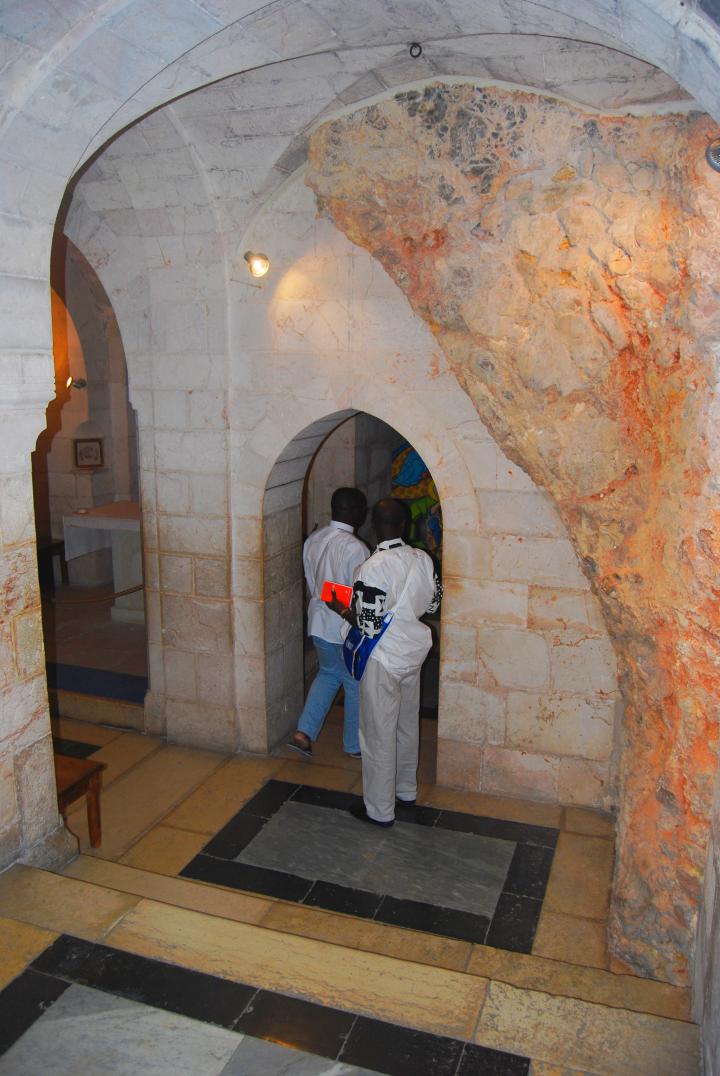 Inside the cave is a mural, with a scene of Anna and Joachim and their newborn child – Mary. The Greek initials on the top-left side is “ΜΡ ΘΥ” – Where MP is Mary in Greek, referring to Virgin Mary, and “ΘΥ” is “God-bearer”. 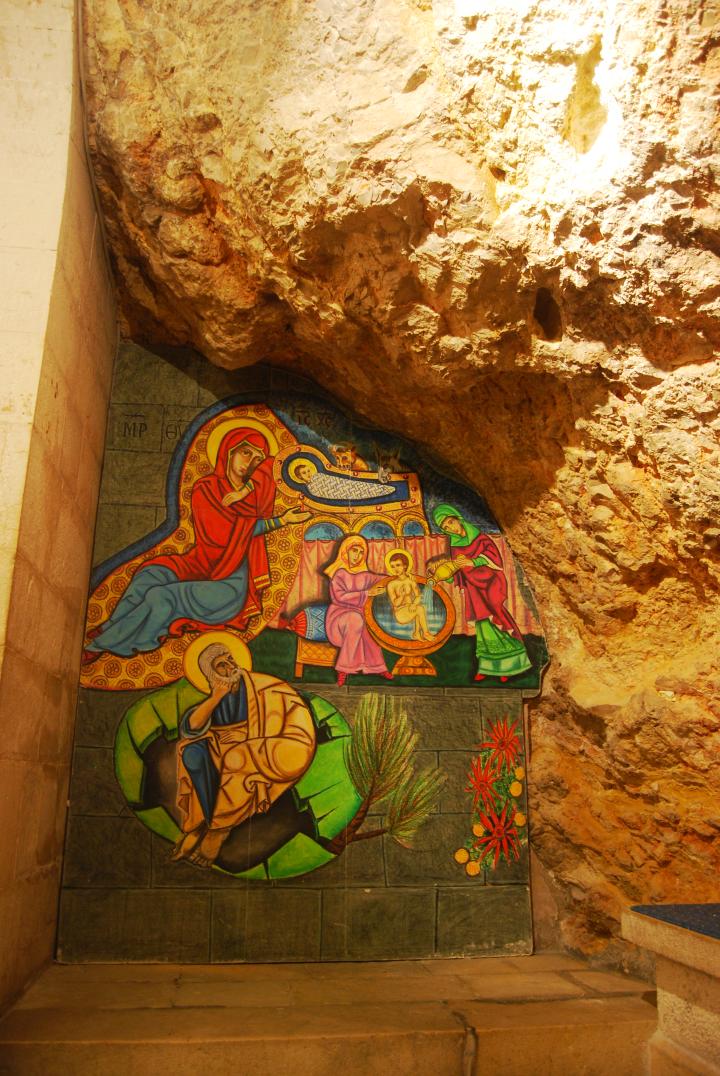 A statue of Mary is located on the north side, as part of the altar dedicated to her birth place. 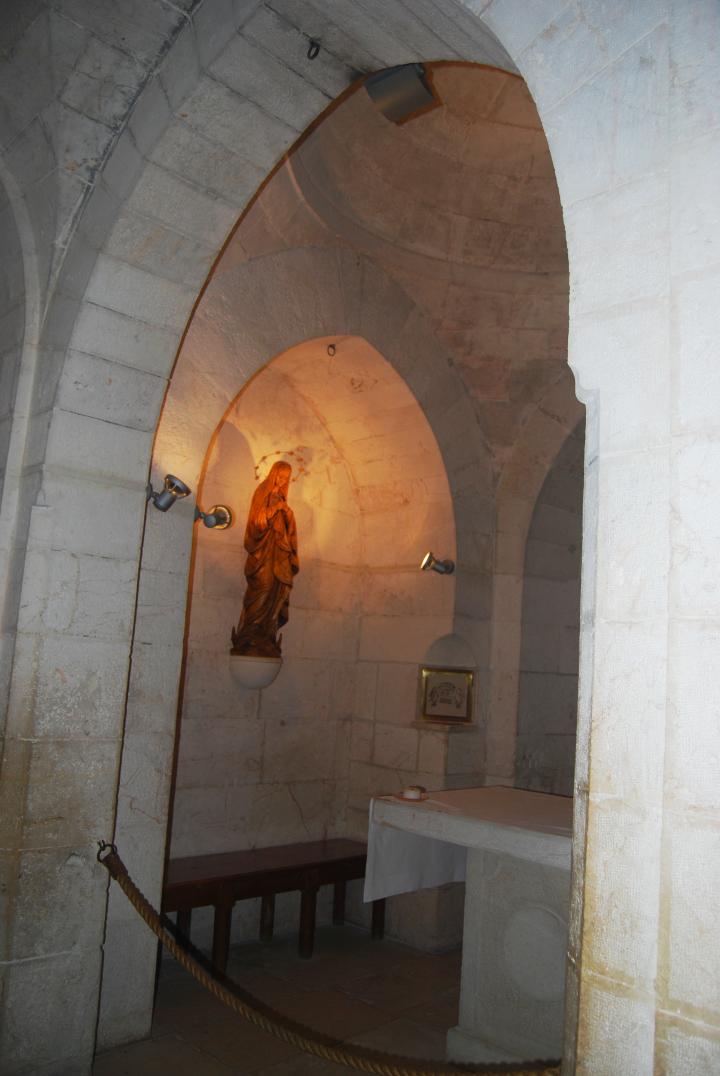 Another view of the charming chamber. 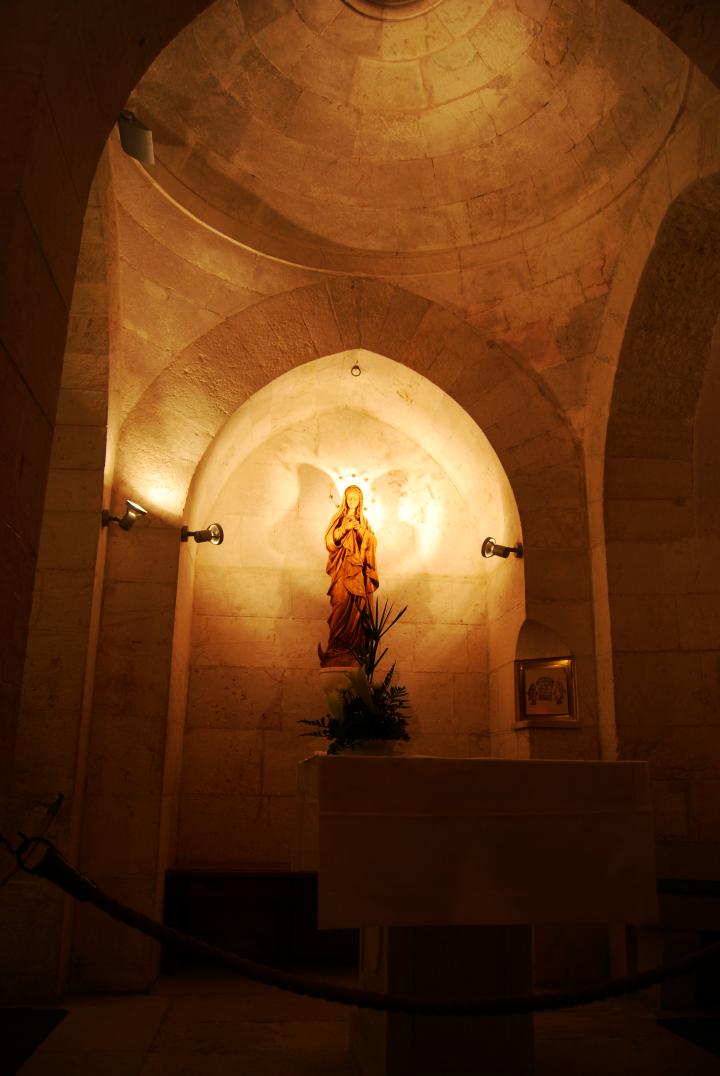 In another corner of the crypt is another altar, as seen below. 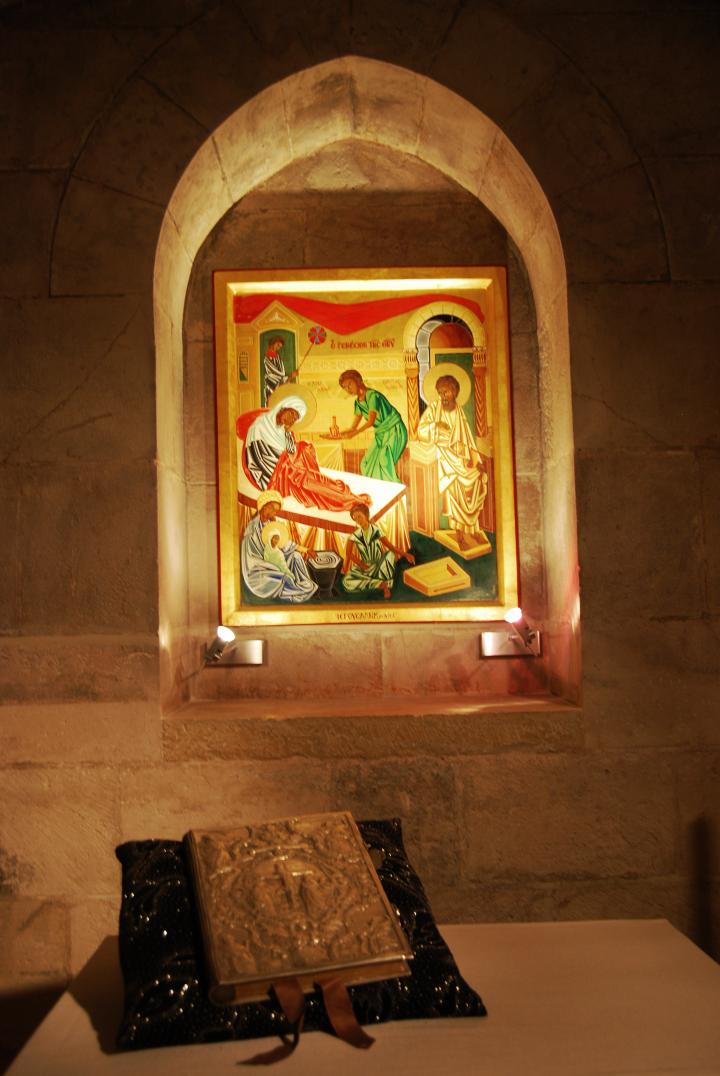