A community south of Nahariya, with a Byzantine Church and beautiful mosaic floors. An ancient Tel from the Iron age to the Hellenistic age is located on the north side.

Shavey Zion (Shavei Zion, Shave Zion) is a community village, based on an agriculture Kefar which was established in 1938 by Jewish immigrants from Germany (all from same city – Rexigen in Wurtenberg). It is located along the beach, south of the city of Nahariya.

In the west of the village is the ruins of an  ancient Byzantine church with a beautiful mosaic floor, part of a Roman/Byzantine village identified as “Nea-Come” (New village). In the north-west are ruins of an ancient Canaanite and Phoenician city.

An aerial map of the village  and the area around it is shown below. 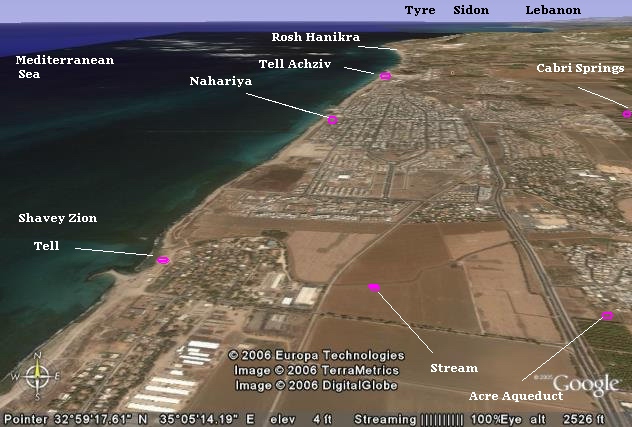 A closer view of the site, and the major points of interest,  is seen in the following map. 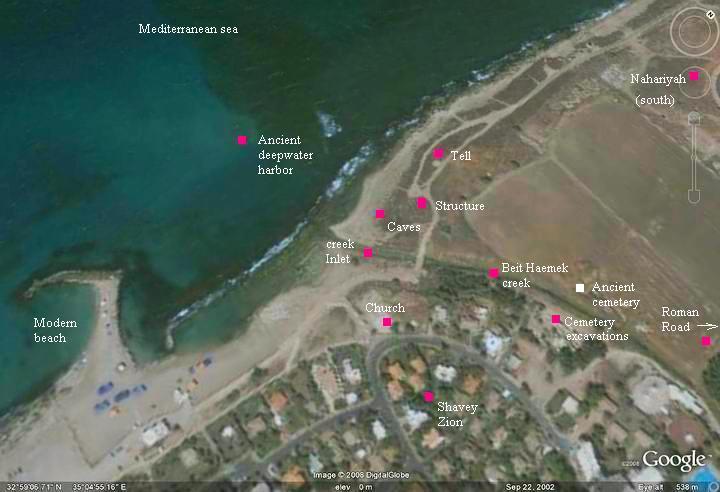 The Canaanite city, established in the Bronze age,  was  strategically located on the western section of Via Maris, the ancient North-South trade route which passed nearby, and its port was used to export the goods from the region.  The city’s maritime activity was based on a shallow, natural harbor, in the inlet of the Beit-Haemek creek that passes south of the site. Its deep water (3-7M) natural harbor was located offshore in the submerged Kurkar (sandstone) rock islands which provided an  anchorage site starting from the middle Bronze period (22-15 Century BC).

The site became a Phoenician city which existed from the Iron age, throughout the Persian and Hellenistic periods,  until the Roman period. The Phoenicians, based in Tyre and Sidon, were the maritime traders of the Mediterranean sea, and established trading towns along the coast southward to Jaffa and beyond.

During underwater archaeological excavations of shipwrecks conducted in 1973/4 in the sea near Shavey Zion, hundreds of ancient Phoenician  figurines (statues) of the Goddess Tanit were discovered in a 5th Century BC (Persian period) shipwreck . The height of these terra-cotta statues is between 12 to 40 cm, and they were cast in molds. One of them is seen on the right. 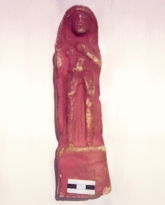 During the Persian and Hellenistic period the city expanded, moving to a larger location south of the Beit Haemek creek and east. An excavation in 1999 in the nave of the church revealed 3 strata – Persian, Hellenistic and Byzantine.

The Romans constructed a new road in 56 AD which passed close to the site.  Two milestones were found near the site – 300M east to the church and another one was located on the south-east. They are on display in Shavey Zion.

The Roman city was probably called “Nea Com(e)” (the “new village”). This was determined according a milestone that was found in Nahariyah. It was dedicated to Nero caesar (54-68AD), by the Roman veterans in the Acre Colony (Col ptolemais):

As seen in other early churches and at this site, 5th Century churches are decorated only with geometric carpets, without figurative objects. The figurative decorations , such as floral,  animal and village/hunting scenes, started only in the 6th century, such as the church in nearby Nahariyah .

According to the excavations, the church and village was destroyed in the end of the 6th Century or beginning of the 7th Century. As happened in other Christian sites in the Western Galilee, it was probably burnt during the Persian conquest (614 AD).

In 1938 a new agriculture settlement was established on the south-eastern side – Shavey Zion.

The reconstructed church and the ancient Tel are open to the public.

A drone captured the  area from the south east side. The ruins of the Byzantine church are seen in the bottom. The Beit-Ha’emek stream separates this side from the Tel (mound), seen on the top right side. 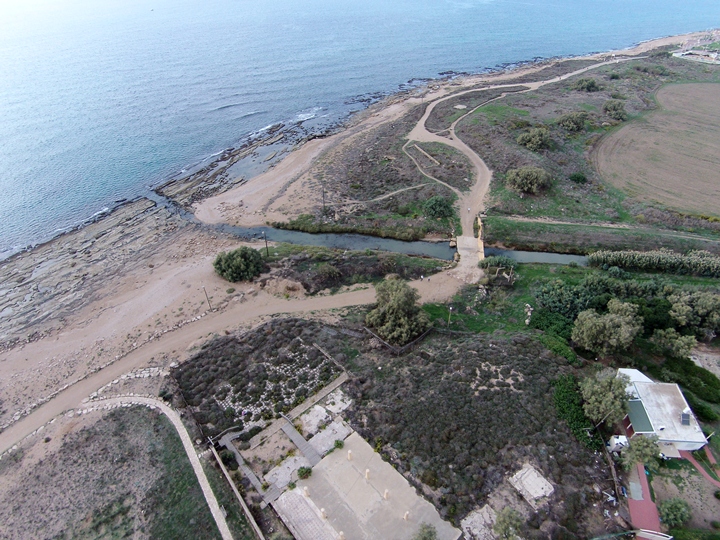 Fly over the site and view its surroundings with the following YouTube video. Note the parachute glider that passed near the drone by surprise.

The drone also captured the area of the Church from the west side: 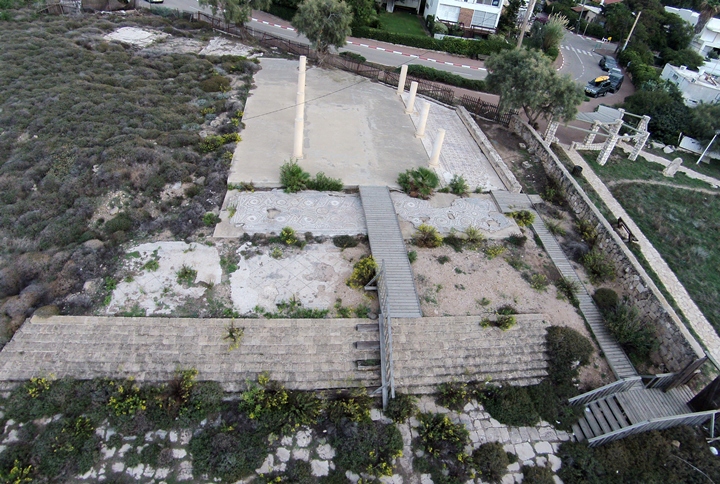 A ground view of the Byzantine church is seen below. 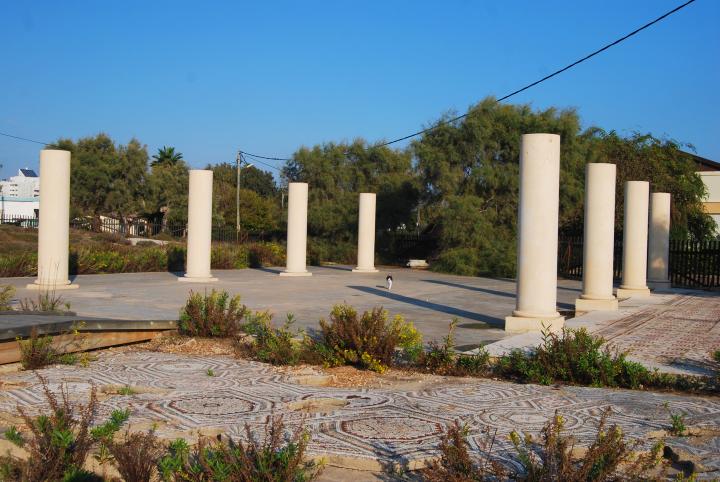 A stairway leads up from a lower level to the church. 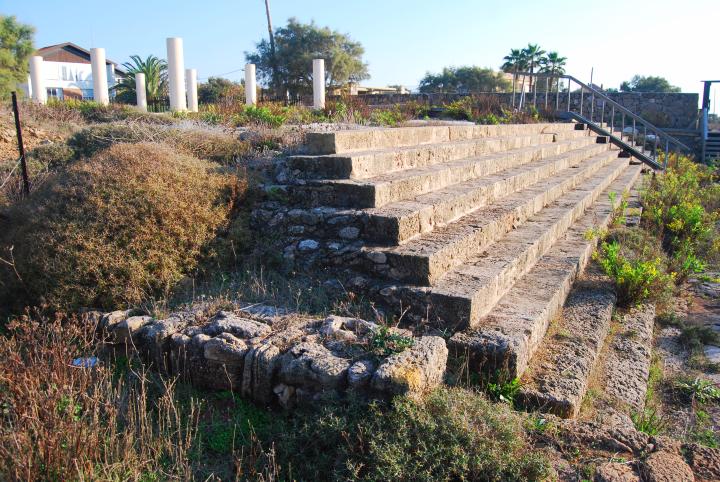 The columns of the church are reconstructed. Pieces of the original columns lie around the ruins, as seen in the photo below. 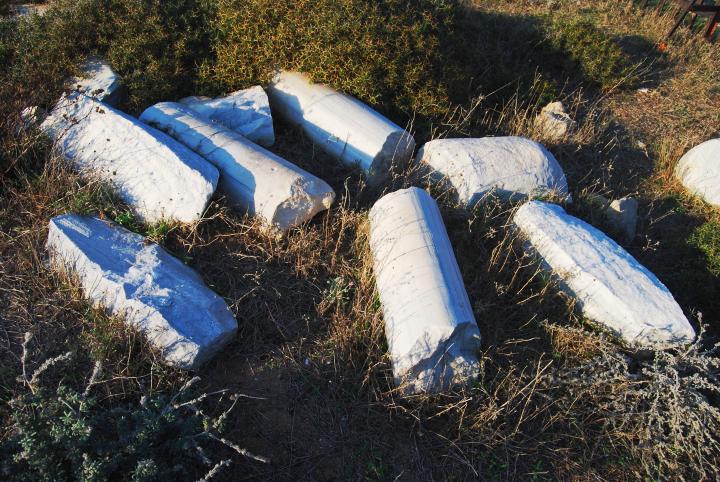 There are also a few of the  marble bases of the columns. 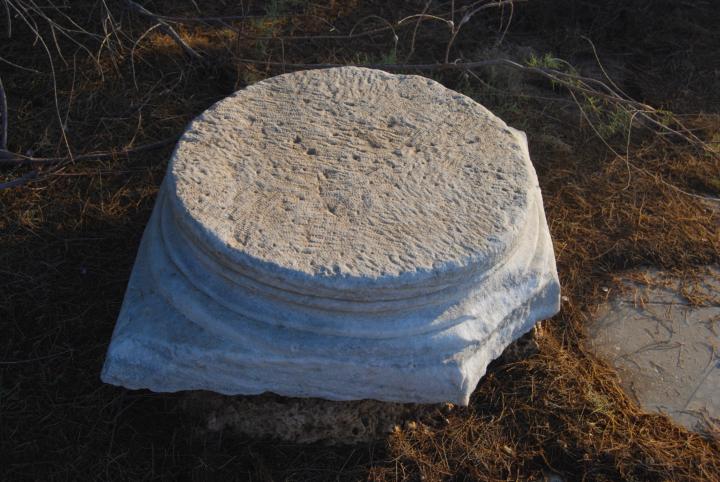 Around the church are ruins of other structures. 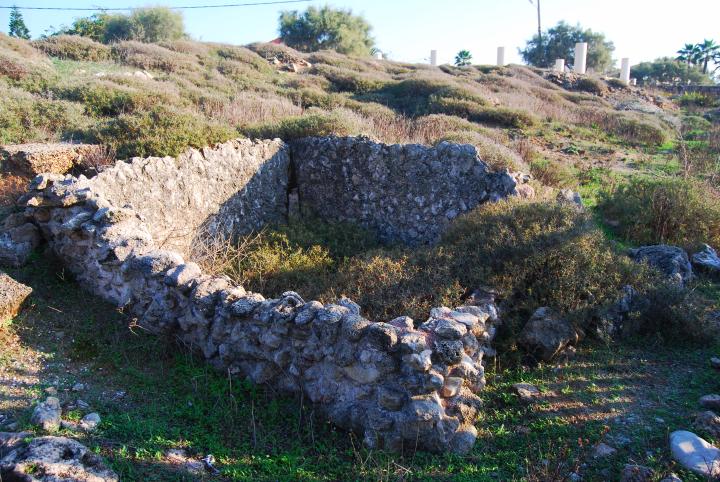 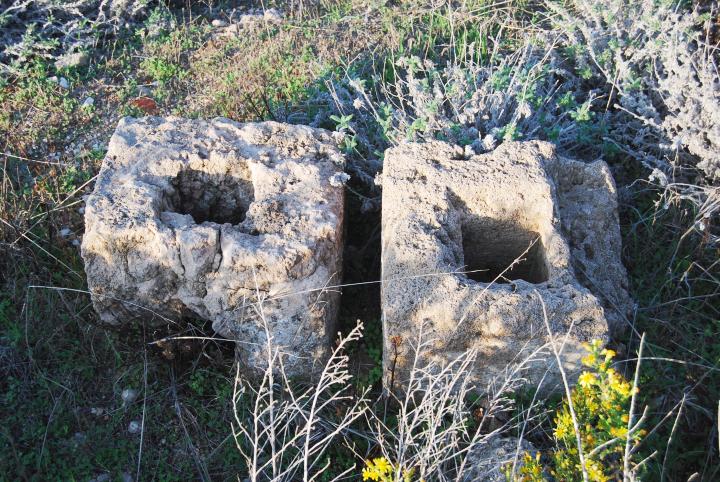 In addition to the mosaic stones, fragments of clay roof tiles are also scattered around. They belong to the rooftop of the church. 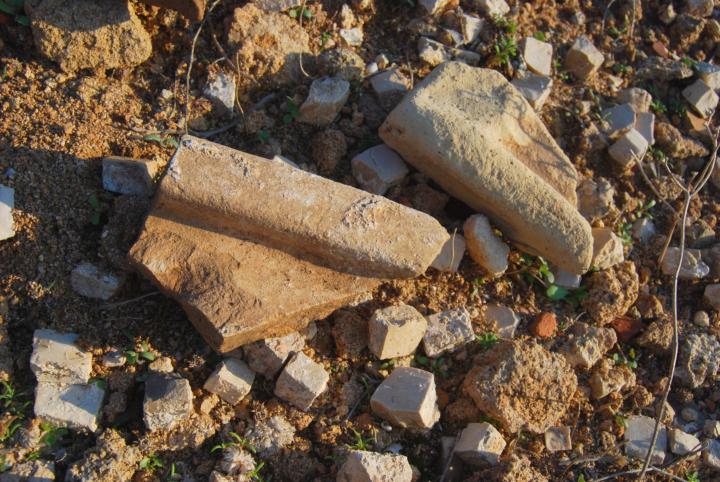 (c) Mosaics on the south side:

A closer view of the floor: 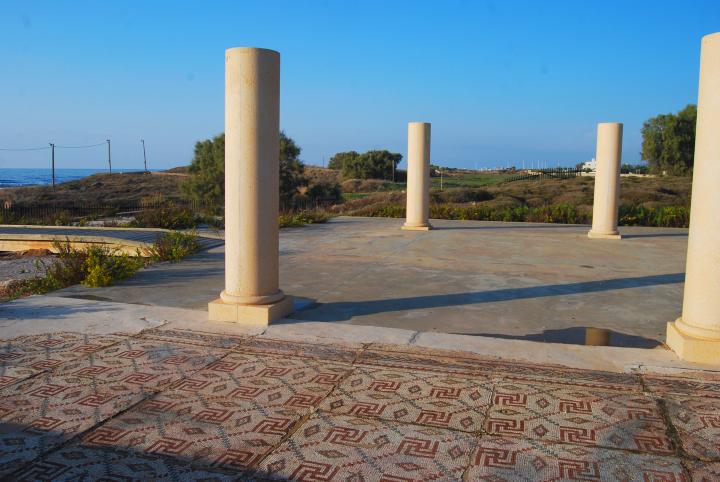 Another view of the amazing floor: 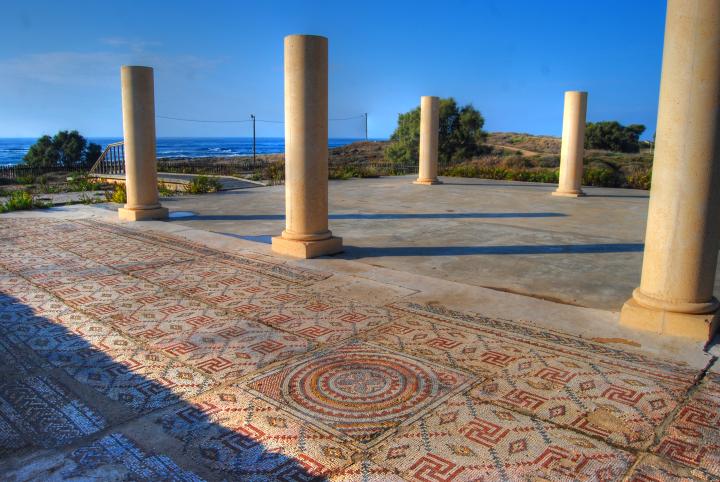 A closer detail in the central pattern: 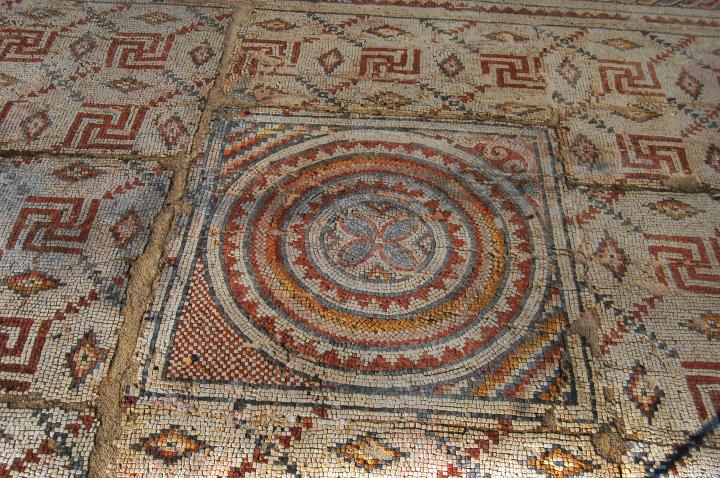 (d) Mosaics on the western side:

Another section of the mosaic floor, with more complex patterns, is seen on the western side (closer to the beach): 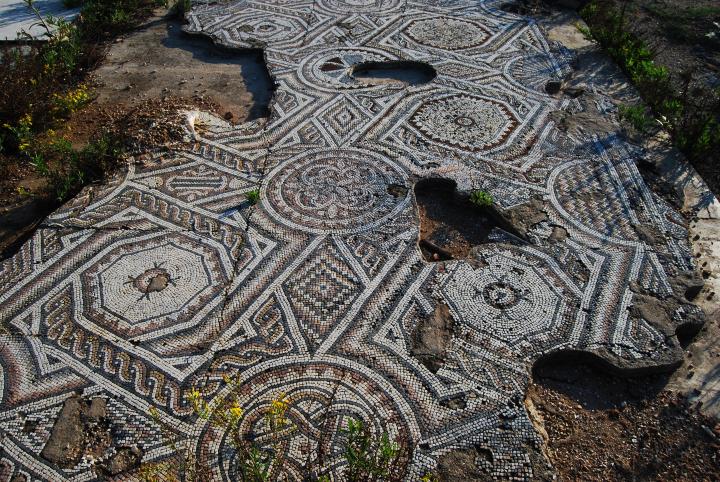 A detail in the floor: 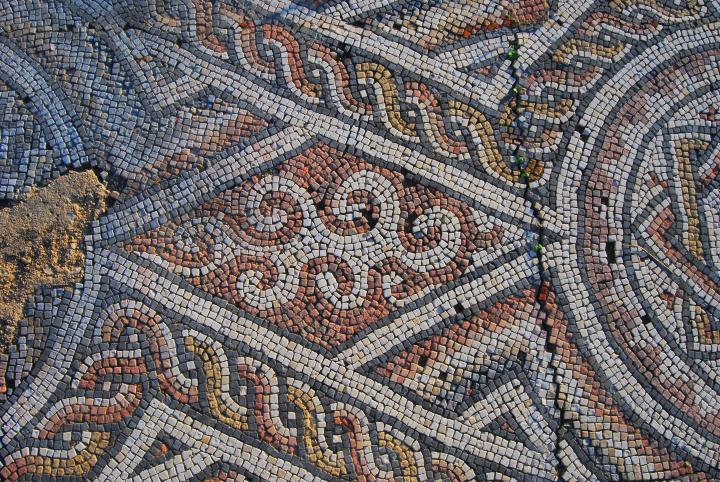 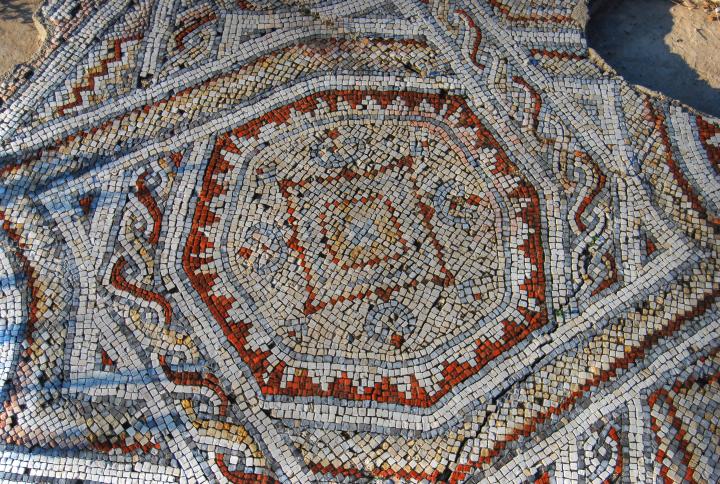 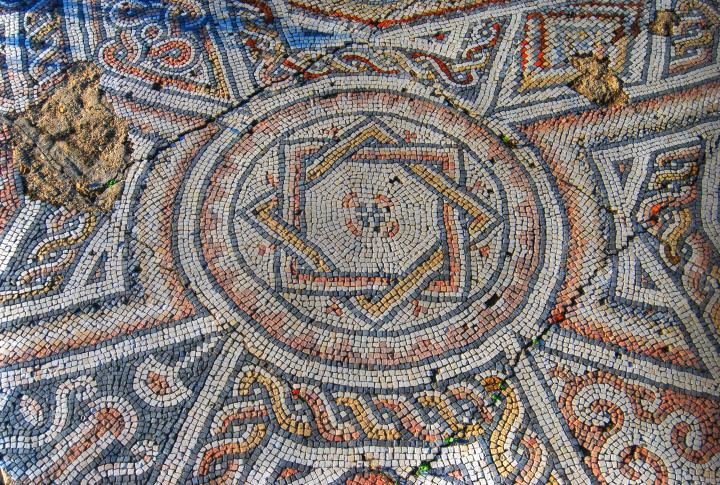 (e) Mosaics on the north side:

A symbol of a cross is illustrated in a fragment on the north-east side. 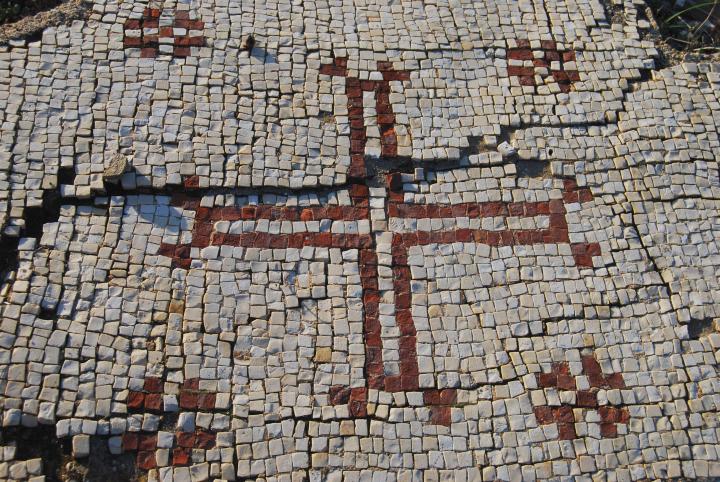 This curious cat followed me throughout the tour of the church (notice the first photo as well). 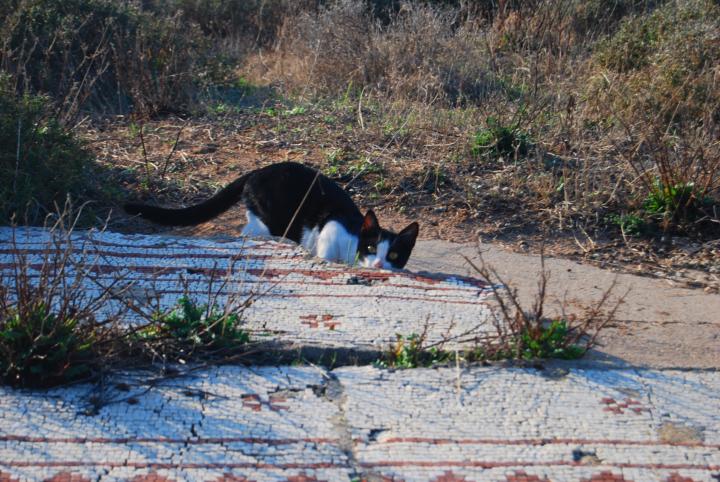 On the north side of the Church is the  ruins of the ancient Tel (Mound). This ancient layered city dates to the Iron age through the Hellenistic period. 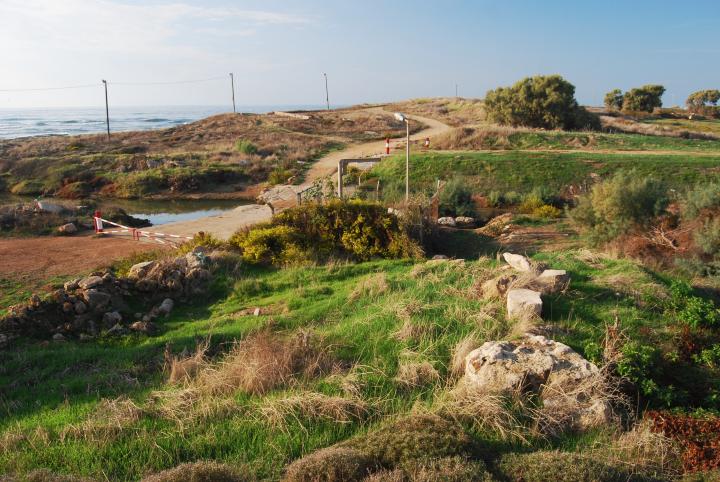 Adjacent to the Tel, there is a stream (called “Beit Haemek” creek, or Nahal Bet-Haemek in Hebrew), the source of the water for the site and also used as a water canal and part of  the natural harbor.  The Arabic name of the valley is Wady Jiddin, named after the Yehiam Crusader fortress which is located 13km upstream. 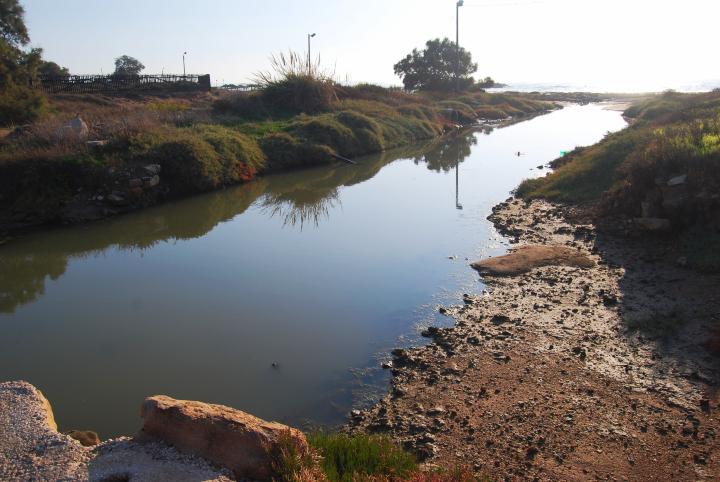 On the Tel there are a few traces of ruins, such as a long walled section on the southern side : 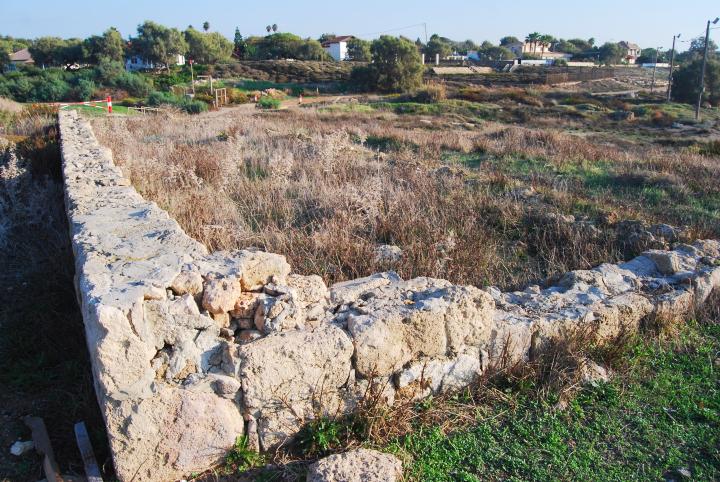 Near the beach are rock cuttings, perhaps part of a sandstone quarry. A cave is located on the south-west side. 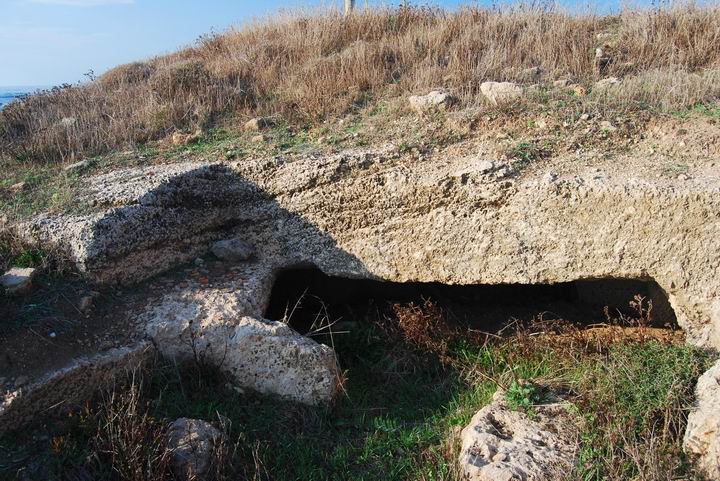 The views along the beach are another good reason to come here for a weekend walk. Many do come here from nearby Nahariya.

In these waters was the ancient deepwater harbor. A natural gap in the sandstone rocks under the sea allowed the larger ships to anchor and deliver goods. 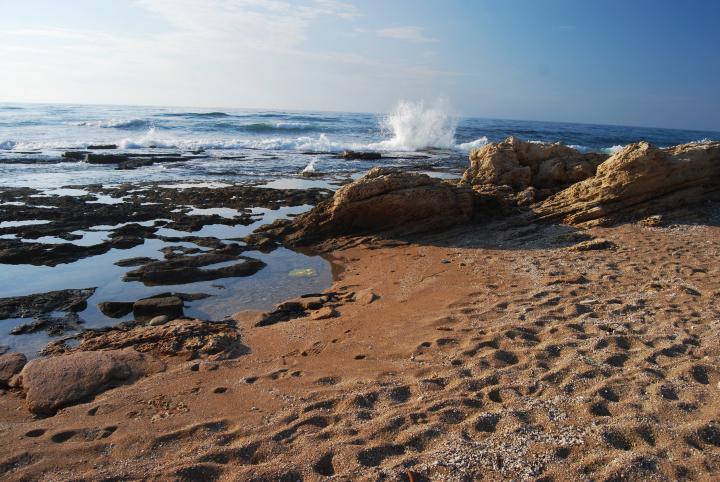 The Romans perfected the art of road building, and enabled them to effectively manage the vast empire by improving the links between the cities, especially for military purposes.  In 56AD the Romans started the construction of a Roman road along the Via Maris, shortly after the region was declared by Claudius as a Colony (Col Ptolemais). The coastal road connected Acre and Antiochia. Two Roman milestones were found nearby, at 400M from the shore, and marked the 4th and 5th miles from Acre to Tyre (309 and 310 of the Roman Acre-Syrian road). Another section of the road was found in Nahariyah (#307, mile 7), 400M from the shore.

The Peutinger map (Peutingeriana tabula) of the 4th century Imperial Roman roads shows the coastal way from Acre (“Ptolemaide” in the top left) to Tyre (“Tyro”). The distance is indicated as “XXXII”, meaning 32 Roman miles – or 48KM. The position of Shavey Zion is located near the mileage marking. 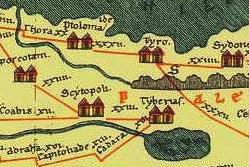 One of the milestones are on display near the entrance to Shavey Zion: 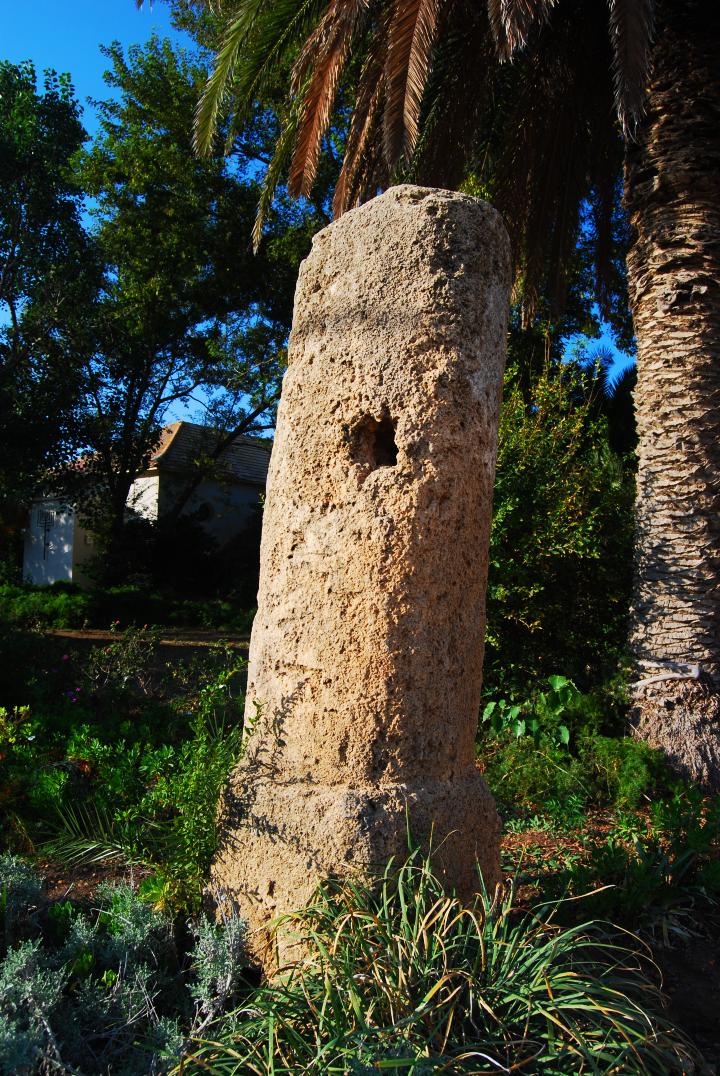 Shavey-Zion (Hebrew for returnees to Zion) refers to the returnees from Babylon (538 AD), but also applies to the modern re-gathering to Israel in the past century. Zechariah was a prophet at the times of the end of the exile.