This page reviews the magnificent Mosaics found in the Roman and Byzantine city of Lower Galilee.

Sepphoris (Zippori) was a major Roman and Byzantine city, the capital and heart of the Galilee province.  It is reviewed in another page.

A sample of its  rich mosaic floors is  presented here. The mosaics were laid during the Roman and Byzantine periods – 2nd to the 7th century AD. They were laid out in public streets, public buildings, synagogues and villas. Their colorful decorations made this ancient city unique – rightfully deserving the title of the “diamond of the Galilee”.

All photos by Tuvia Liran.

(a) The Nile house

On the south side of the city, and east to the Cardo, is a large building called the “Nile house” – named after one of its amazing mosaics that depicted scenes from the Nile.  The name of the mosaic artists are written on a mosaic inscription  (naturally…) on the side of the Cardo, at the entrance of the house.

The photo below is a section of the floor, showing celebrations in Egypt along the Nile after it over flowed, and hunting scenes. 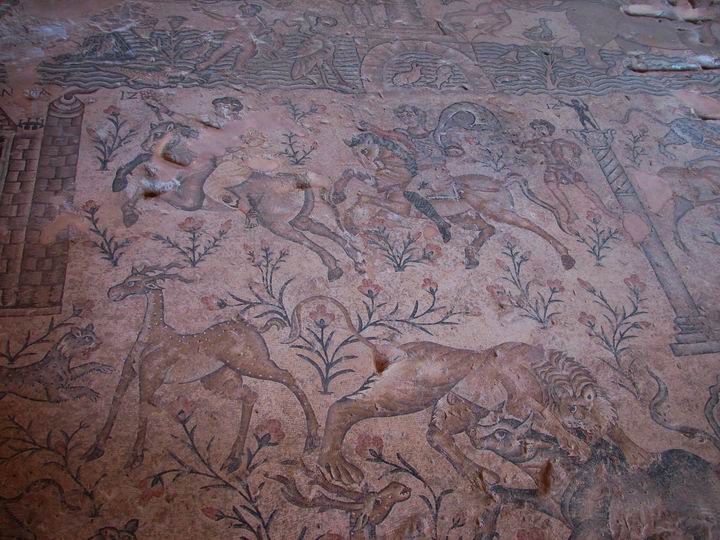 The lower section is detailed below. 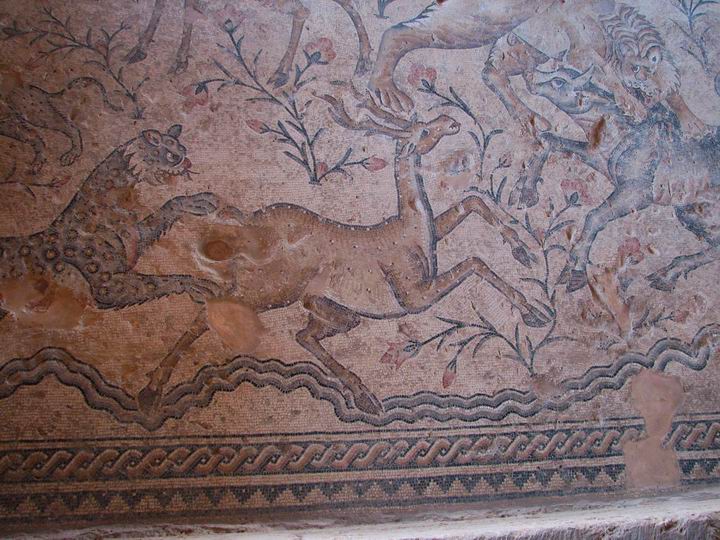 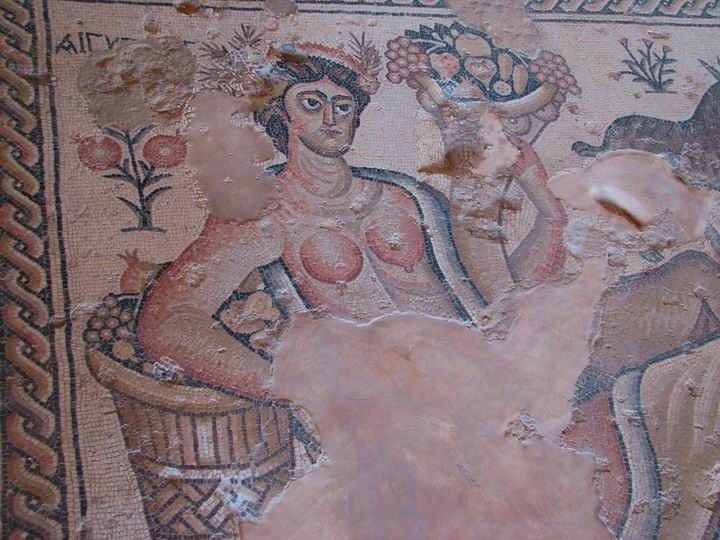 A pair of hunters. 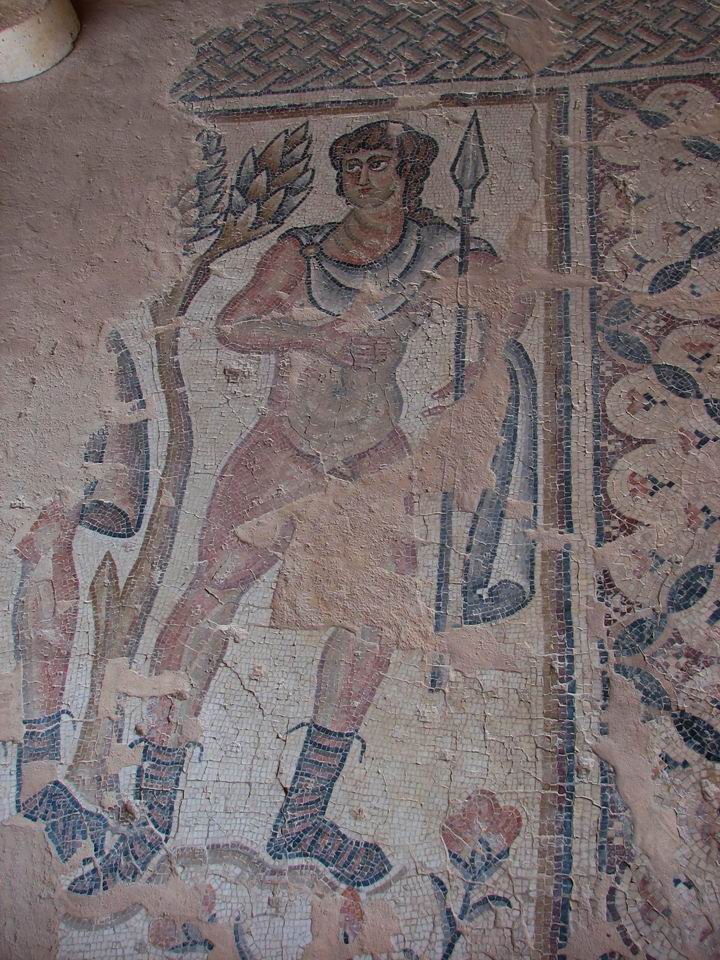 The Amazons – the tribe of warlike women – in a celebration. 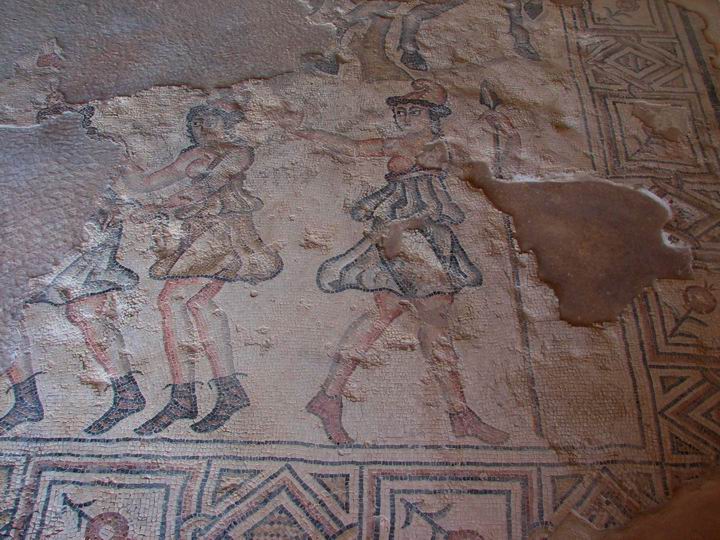 Another scene of hunting Amazons. 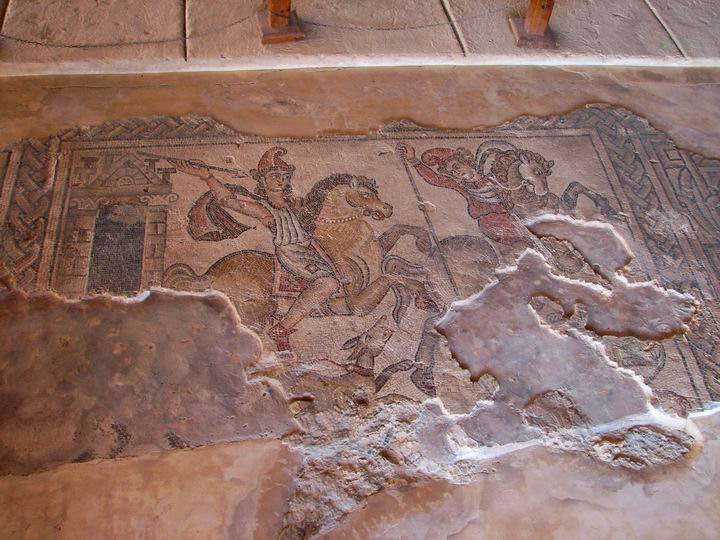 A section with dazzling geometric patterns. Try to follow the lines!… 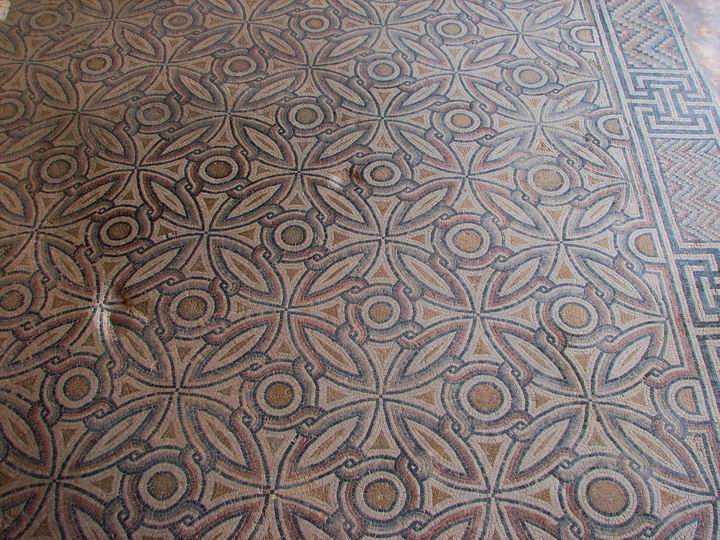 (b) Western church and Orpheus House

The Orpheus house was a 2nd century AD Roman building, measuring 17 x 28M, and located at the middle of the Cardo street. A Church was built on top of its remains at the end of the 6th century AD.

The Mosaics are from the Orpheus House level, and consisted of simple geometric patterns in most of the rooms. However, in the dining room are four panels that show scenes of Orpheus, the divine musician, and of daily life.

Another scene of the Orpheus house mosaics. 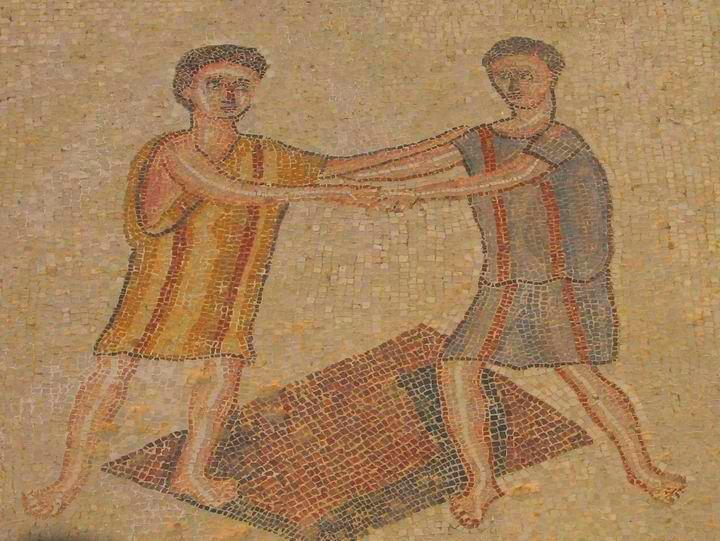 Dated to the 5th century, the 15M x 7M building  was covered by a magnificent Zodiac  mosaic floor, 20 inscriptions in Greek and Aramaic,  and scenes from Bible stories.  The section of the mosaic floor with the Zodiac  is seen below. 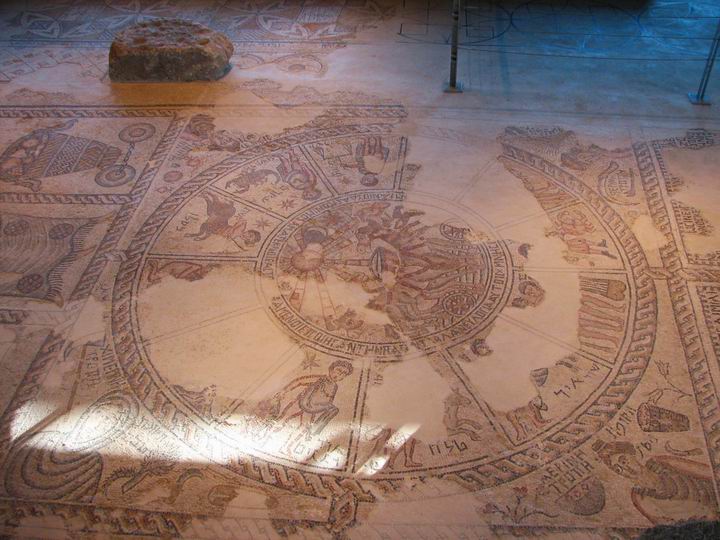 This is a detail of the floor, with 2 Zodiac signs illustrated and written in Hebrew  letters: the scorpion (Akrab=Scorpio, month of Heshvan) and the bow (Keshet=Sagittarius , month of Kislev). 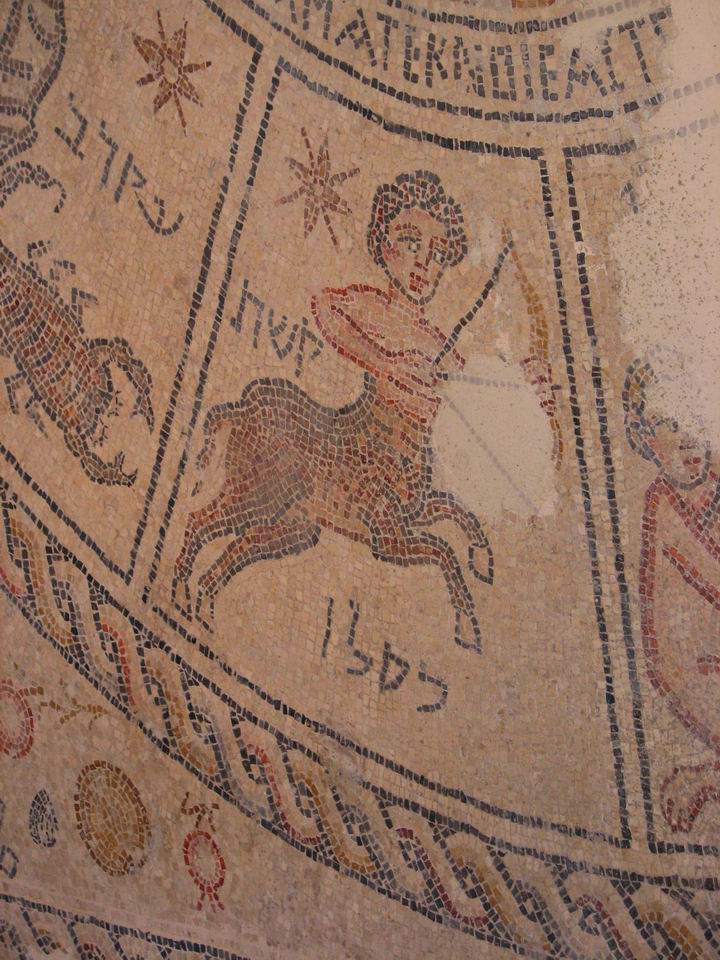 The center of the Zodiac is seen below, which symbols the cycle of Nature. In this scene is Helius, the Greek God of the Sun, ascending from the sea on a carriage pulled by horses. The carriage is empty and it seems like the sun is driving it.

Helios was the Titan god of the sun who presided over the  the measurement and divisions of the day, the year and the seasons.  It was a common motif in ancient synagogues in Israel, where 7 sites (Beit Alpha, Hammat-Tiberias, Yafia, Khirbet Susiya,  Beth She’an, Naaran and Husifa) illustrated the twelve zodiac signs with Helios in a sun chariot, most of them  surrounded by angels. You can also check the link below. 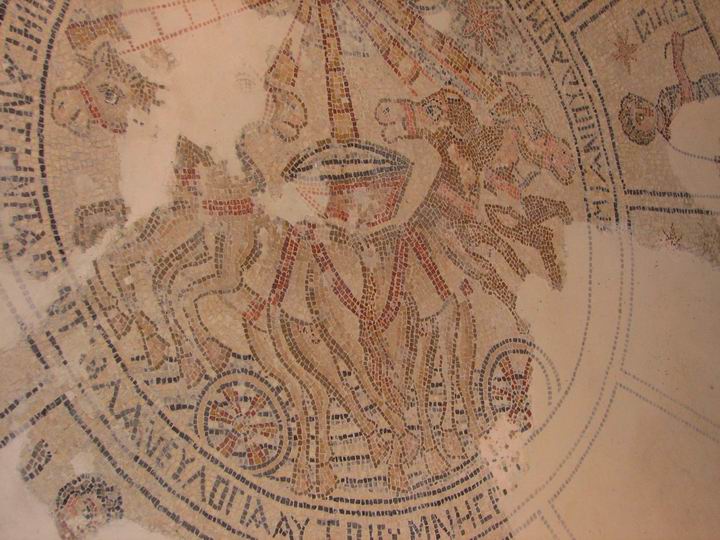 The mosaics contain Jewish motifs and depictions of Biblical stories, arranged in rectangular strips. The photo below shows on the top side the consecration of Aaron in the Tabernacle (based on Exodus 29), while the bottom of the section are scenes of the daily offering (bottom left) and shewbread table (bottom right). 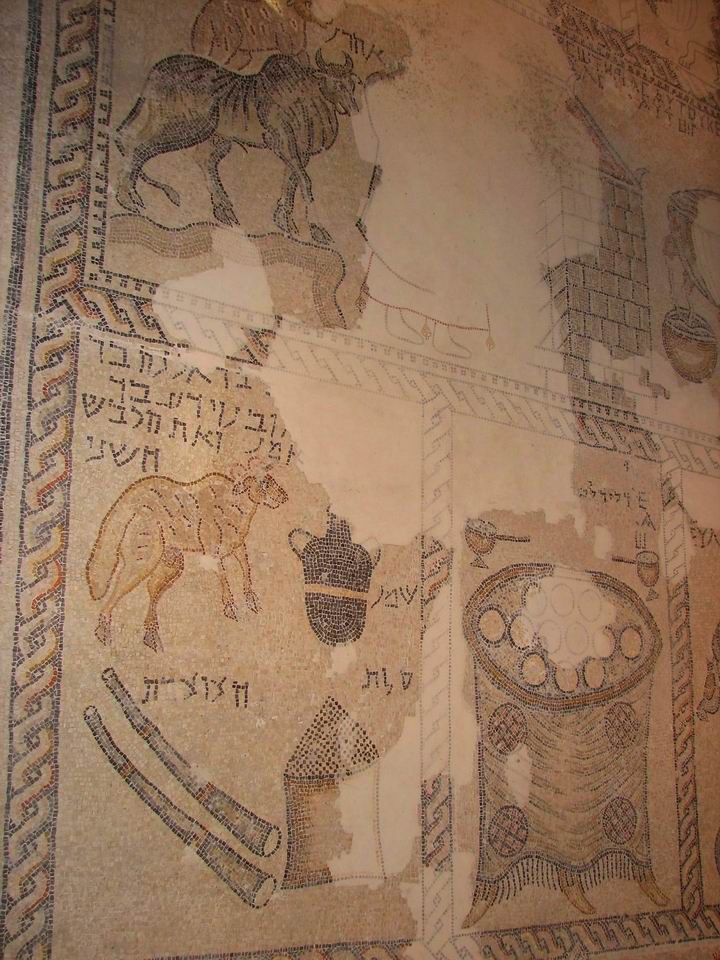 The mosaic below is part of the scene of the binding of Isaac. The two young men depicted in the painting were part of the story,  when Abraham told his men to wait with the donkey, as seen in this painting (Genesis 22:16-17): “And Abraham said unto his young men, Abide ye here with the ass; and I and the lad will go yonder and worship, and come again to you.” On the right side is a part of the scene of Abraham and Isaac at the place of the altar, but that section was damaged. 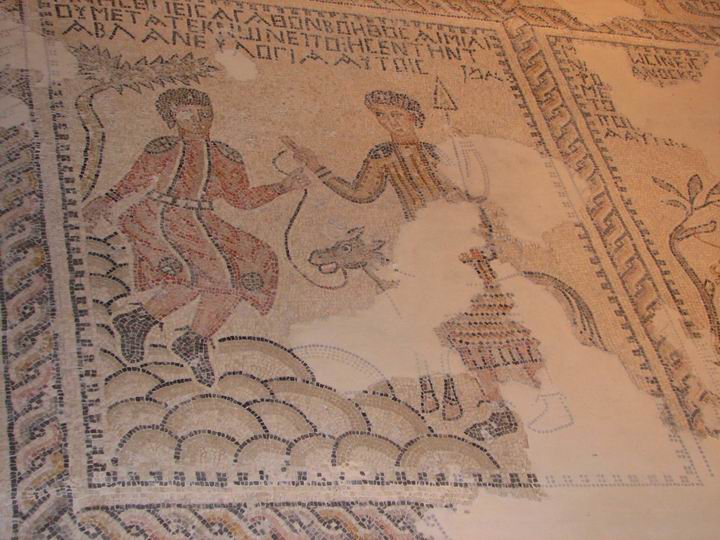 One of the famous findings in Zippori is the “Mona Lisa of the Galilee“, that was discovered in the banquet hall of the Dionysus  building. The mosaic, shown below, is located in the central panel and portraits a beautiful woman. 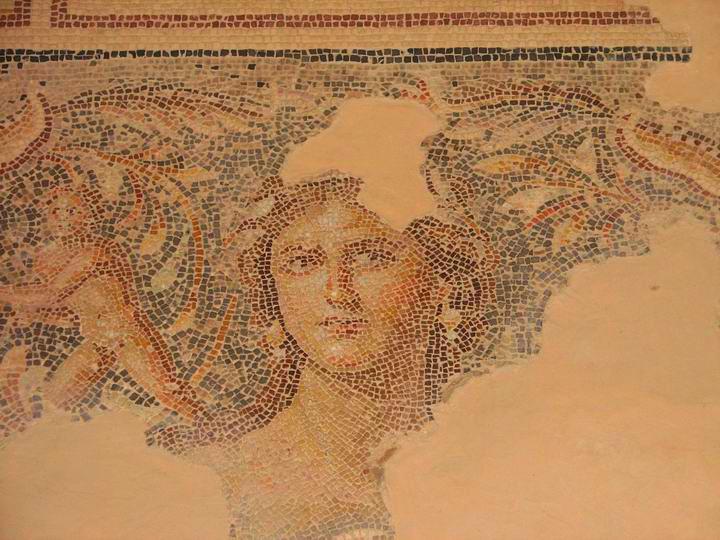 A closer view of the face is shown below. This illustration of a beautiful young lady may have been of Venus, the Roman Goddess of Love, as there is a cupid on her left side. A similar mosaic was found in Pompeii, with a cupid on the left. 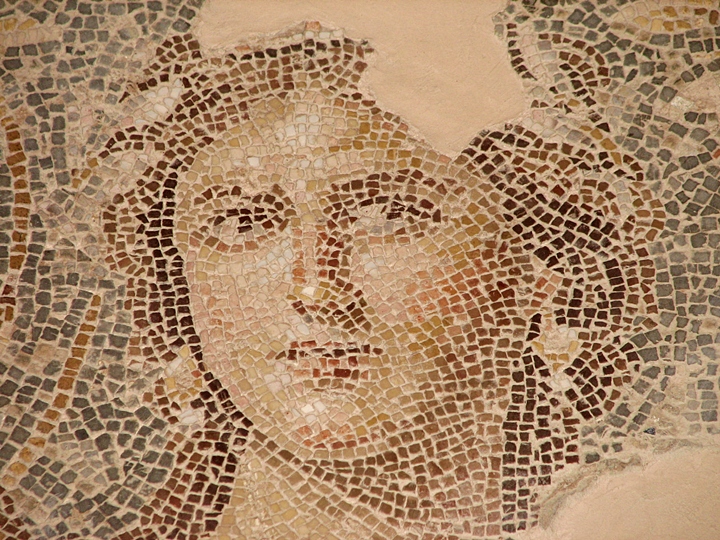 This text is the basis for one of the Mosaics in the Synagogue.

This text is the basis for the left detail of the binding of Isaac:

“And Abraham said unto his young men, Abide ye here with the ass; and I and the lad will go yonder and worship, and come again to you”.

BibleWalks.com – Let the Bible be your tour guide