“Saul’s Shoulder”, a mountain ridge on the northern end of Mt. Gilboa, offers a great view of the Jezreel and Beit Shean valleys. During the Biblical times, King Saul died in battle with the Philistines which gave the name to the place.

The observation site “Saul’s shoulder” is located on the north side of Mt. Saul, with a peak at 302m above sea level and 360m above the Jezreel valley.  Access to the parking site near the peak is from the south west side, by a road that climbs up from road #667. 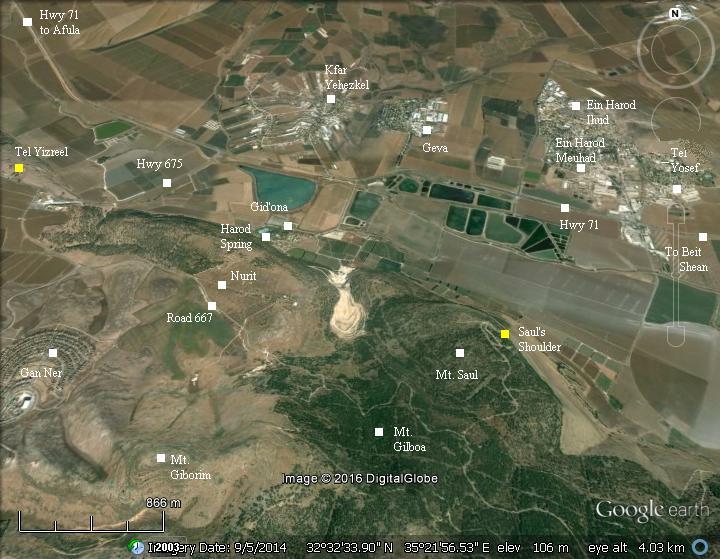 According to the archaeological survey, there are several structures on the peak of Mt. Saul:

Mt. Gilboa is located above two fertile valleys – the Jezreel valley to the west, and Beit Shean to the east.   Through these valleys passed major ancient crossroads, connecting to Beit She’an, the Jordan valley (south), Jerusalem (southwest), Jezreel (west), and Gilead (east).  The cities (circles) and roads (dashed lines) during the Canaanite and Israelite periods are indicated on the Biblical Map below. 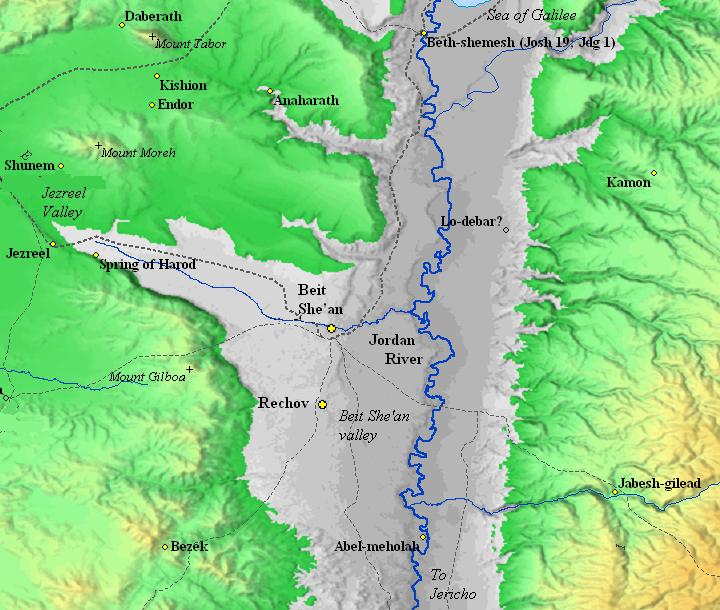 Map of the area around Mt. Gilboa – during the Canaanite and Israelite periods  (based on Bible Mapper 3.0)

On Mt. Gilboa was one of the great battles of the Early Kingdom – between the first King Saul and his arch enemies – the Philistines.

The Philistines, based in the southern Sharon area,  planned to expand their territory to the Galilee. King Saul tried to block this move and prepared the Israelite armies near the nearby city of Yizreel, on the west side of Mt. Gilboa. Saul camped in the Yizreel spring on the foothills of the city.  The Philistines, assisted by Saul’s rival (later King) David, set their camp in Shunem (at the foothills of Hamoreh hill, across the valley). (1 Samuel 29 1): “Now the Philistines gathered together all their armies to Aphek: and the Israelites pitched by a fountain which is in Jezreel”.”.

The battle was fought in the Jezreel valley and the Israelites fled to Mount Gilboa, where King Saul’s 3 sons first fell in the battle (1 Samuel 31:1-2):

Saul was also wounded, and he killed himself to avoid being captured (1 Samuel 31:3-6): 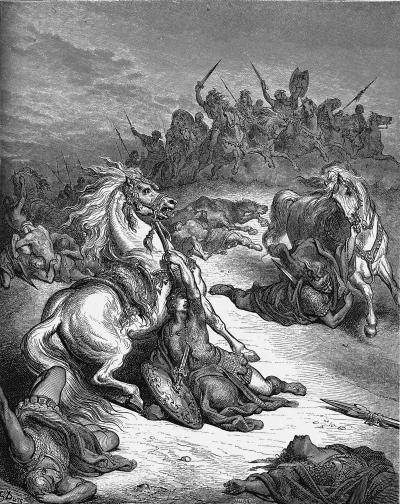 The Philistines hang their bodies on the walls of Beit She’an,  and displayed Saul’s head and amour (1 Samuel 31: 8-10):

“And it came to pass on the morrow, when the Philistines came to strip the slain, that they found Saul and his three sons fallen in mount Gilboa. And they cut off his head, and stripped off his armor, and sent into the land of the Philistines round about, to publish it in the house of their idols, and among the people. And they put his armor in the house of Ashtaroth: and they fastened his body to the wall of Bethshan”.

“Neither let there be rain”:   Following the events of the battle, his successor King David cursed Mt. Gilboa after the death of Saul and his sons (2 Samuel 21):

“Ye mountains of Gilboa, let there be no dew, neither let there be rain, upon you, nor fields of offerings: for there the shield of the mighty is vilely cast away, the shield of Saul, as though he had not been anointed with oil”.

Indeed, most of east side of Mt. Gilboa looks barren,  although modern foresting added green colors to some parts of this side of the mountain.

A summary of the great battle is illustrated here, and follows these steps:

0. The Israelites camp near Yizreel spring, while the Philistines camp in Shunem on Mt. HaMoreh foothills

1. Saul seeks the advice of the witch in Endor (near Mt. Tabor), who gives him a gloomy outcome

2. The battle in Jezreel valley, with the Philistines upper hand

3. The Israelites flee to Mt. Gilboa

4. King Saul and his sons die on Mt. Gilboa

5. The Philistines hang their bodies on the walls of Beit Shean 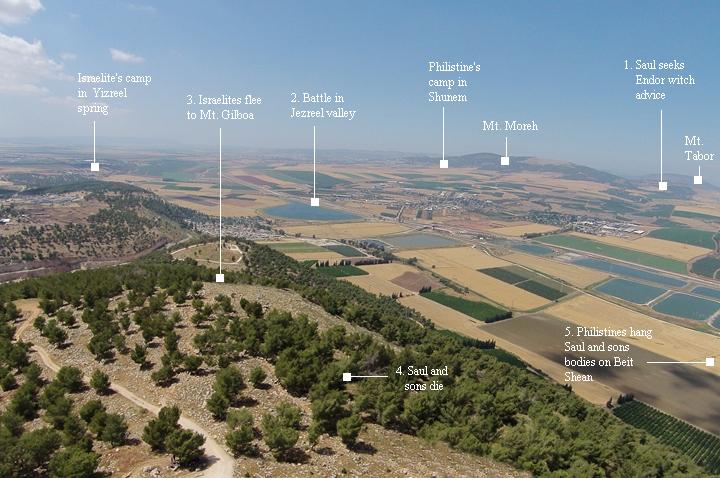 The Mameluke were Turkish prisoners who were sold to the Sultan of Egypt, trained by him and served as his palace guards. In 1250 they seized the control of Egypt. In 1260 they faced a major enemy who conquered vast areas in Asia and the Levant – the Mongols. They managed to block the Mongol invasion and defeat them in the valley below Mt. Gilboa. This battle, known as the battle of ‘Ain Jalud (Ein Harod), was a of the major milestones in both the Mongol and the Mameluke histories .

The Mameluke  controlled the Holy Land for the next 250 years.

The site was examined in the PEF survey (1866-1877) by Wilson, Conder and Kitchener.  A section of their survey  map below shows the Northern area of Mt. Gilboa, while Mt. Saul appears here with its Arabic name – Jebel el Kaleily, meaning: the mountain with the peaks. 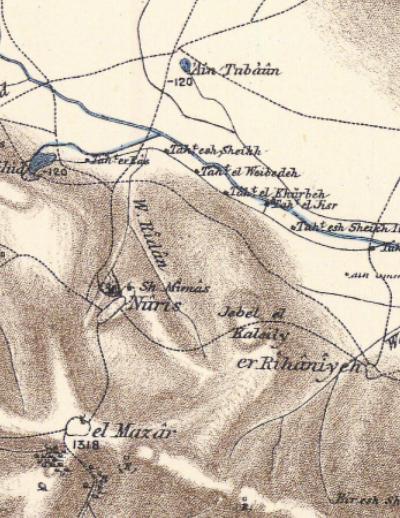 ‘This mountain lies west-north-west and east-south-east, being about eight miles long by three to five miles in breadth. It is cultivated in parts, and is divided into several plateaux and summits by valleys and ravines of greater or less depth. Here and there basaltic stones are found, but limestone predominates. The soil is for the most part of a reddish colour, and is fit for cultivation in many places. Wheat and barley grow on the more gentle slopes and on the plateaux; clumps of olives and figs, hedges of cactus surrounding gardens, and where man has not seized upon the soil, wild grass and brushwood ; at other points naked rock ;such is the appearance of this mountain, once the scene of the death of Saul and Jonathan, against which David pronounced his malediction.'”

Arab villages existed at that time around Mt. Saul – Nuris to the west,  er-Rihaniyeh to the east, and el Mazar to the south west (see map above). The PEF report described both villages (Volume 2, p. 86):

“Nuris – A small village on rocky ground, much hidden between the hills. It is situate above the steeper slopes of the Gilboa chain, which face northwards and below the main ridge, and is about 600 feet above the valley.

Er Rihaniyeh – A small village of mud and stone. On the south the ground is rocky ; on the north there is plough-land. It stands on the foot of the Gilboa slopes.

El Mazar, or El Wezr – A village on the summit of the mountain. It is principally built of stone, and has a well on the south-east. A few olives surround the houses. The site is very rocky. It is inhabited by Derwishes, and is a place of Moslem pilgrimage.”.

The KKL paved a road and built a public parking place near the summit of Mt. Saul, naming it in honor of King Saul. The observation site offers a convenient parking, picnic tables, hiking trails and one of the greatest panoramic views in Israel.  It is also a spot where paragliders are launched, then soar above the valley.

A drone captured this view towards the east.  The northern edge of Mt. Gilboa is seen on the right, towering over the fertile Jezreel and Beit Shean valleys.

Mt. Gilboa is a mountain range that extends from Samaria.  It is oriented south to north, covering an area of 18km long and 9km wide. 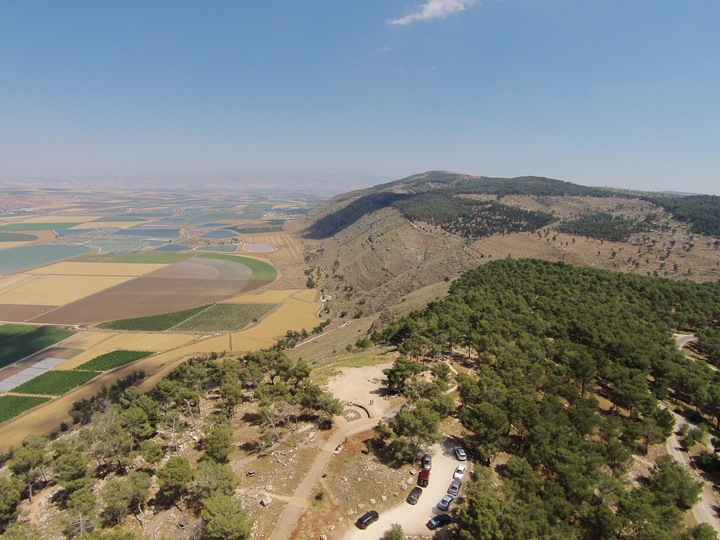 Another view, towards the south east, is in the next photo. Mt. Saul (alt. 302m) is one of the hills of Mt. Gilboa, and is covered by pine trees. In the background is the northern section of Mt Gilboa, with Mt. Barkan (alt. 497m) in its far left side. 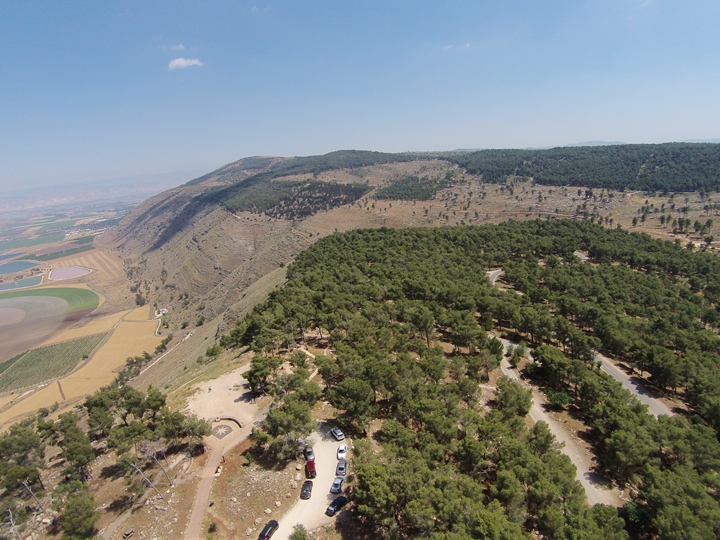 The next view is towards the north west, where the ancient city of Jezreel was located next to the ancient pass from Jezreel valley to Samaria. In the far background are Mt. Moreh and Mt. Tabor. 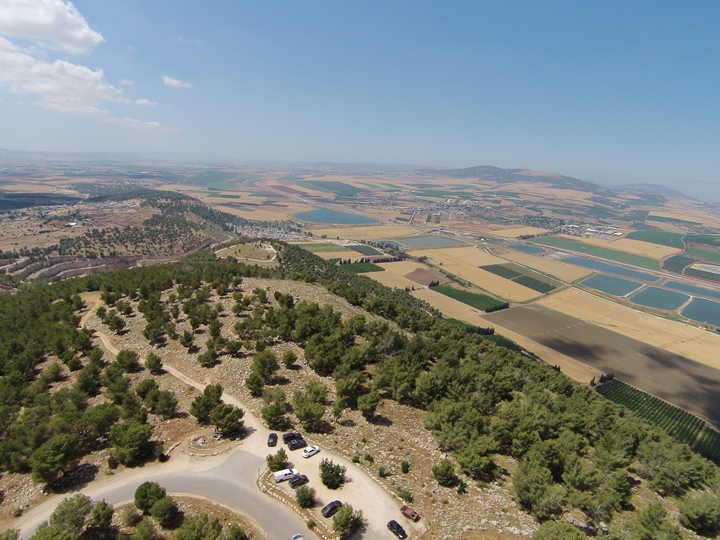 From the edge of the cliff are great views of the area. This east view shows the northern edge of Mt. Gilboa, with the valley of Beit Shean in the background. Behind, in a far distance behind the Jordan river, are the mountains of Jordan. 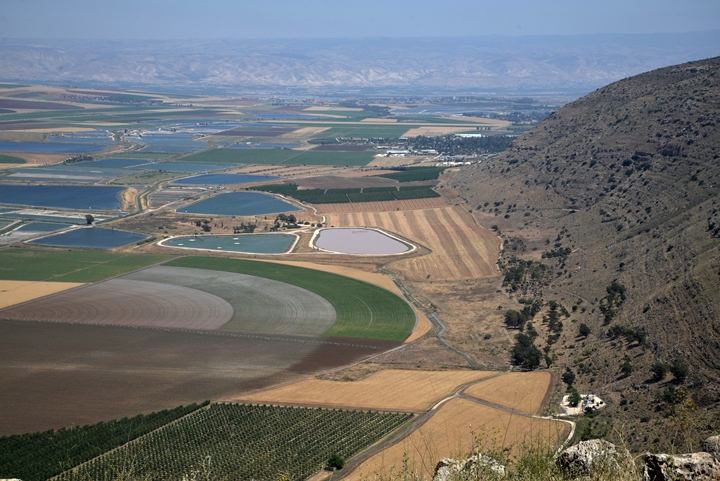 The next photo is a closer view towards the east. It shows Kibbutz Hefzibah, where the ancient synagogue of Beit Alpha is located, with its magnificent colorful mosaic floor depicting a Zodiac and other elements. In the Kibbutz  also lives Webmaster Rotem’s Uncle Ronnie and family. 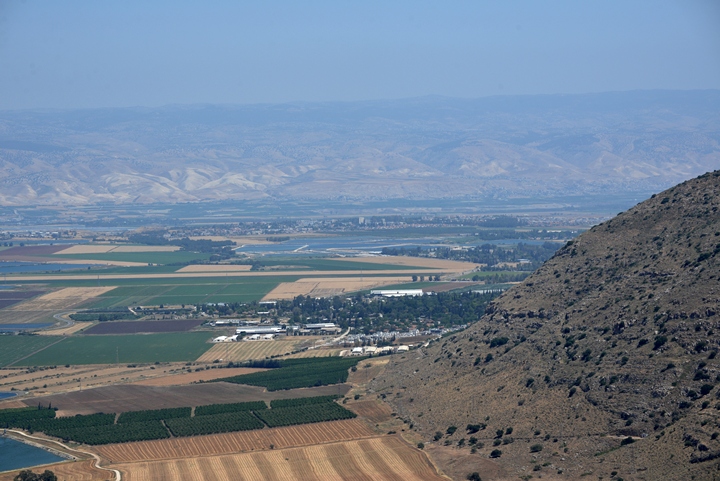 The next view is towards the south east, with the north side of Mt. Gilboa. The foothills are barren, as the Bible wrote that the mountain was cursed by David after the death of Saul and his sons (2 Samuel 1:21): “Ye mountains of Gilboa, let there be no dew, neither let there be rain, upon you, nor fields of offerings: for there the shield of the mighty is vilely cast away, the shield of Saul, as though he had not been anointed with oil”. 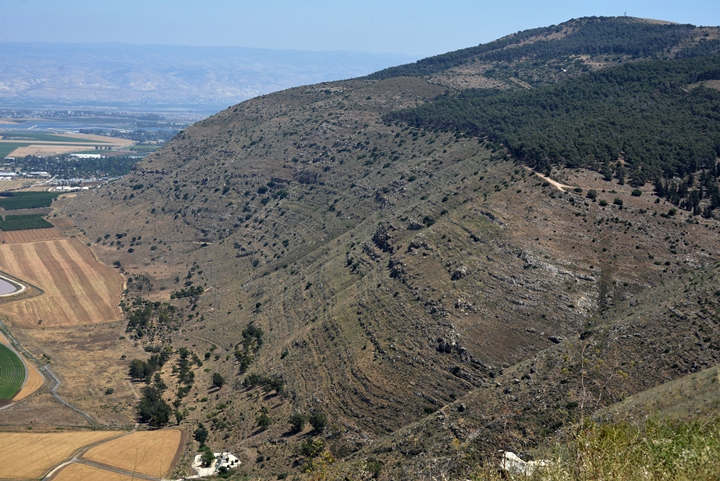 Towards the north, past the fertile valley, are the three kibbutz settlements – Ein Harod-Ihud, Ein Harod-Meuhad  and Tel Yosef. 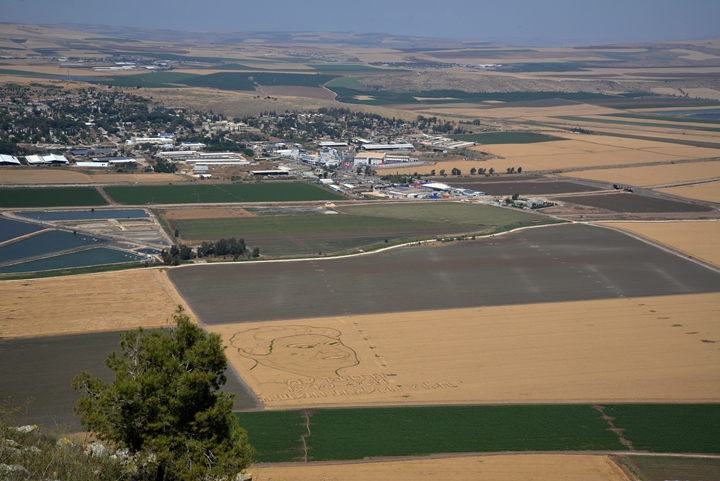 A closer view of the valley shows a portrait etched in the wheat field of kibbutz Ein Harod-Ihud. This  illustration was prepared by the artist Peter Weiner, created with a tractor guided by GPS, that chemically depletes the wheat following the lines of a sketched illustration.  It covers an area of approx. 300m x 500m (150 dunam, or: 15 hectares). Amazing! 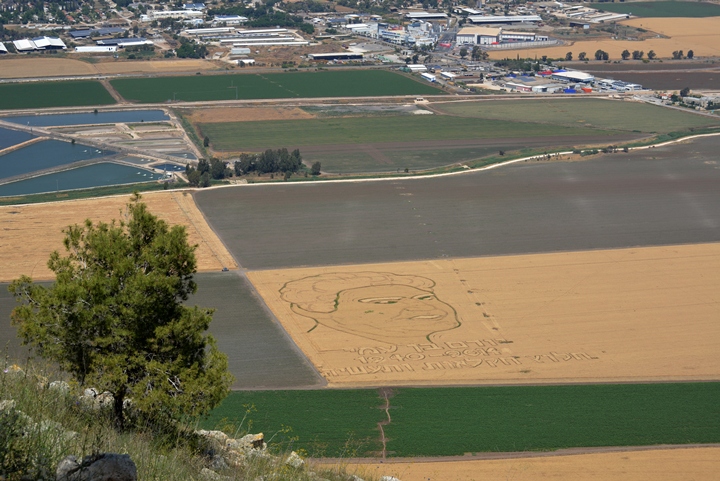 The giant wheat field portrait  is changed every year. This year it depicts the bust of the late Yoram Ben Ami, and adds a title in Hebrew: “a pioneer of agriculture and Industry 1940-2014”.

The field art can be viewed exclusively from Saul’s shoulder, or from airborne platforms such as hang glides (that take off from here) and hot-air balloon rides (that sour above Mt Gilboa and the valleys).

Kibbutz Ein Harod is also known for its art museum, which was first established in the 1930s. This is perhaps why the Kibbutz sponsors the wheat field art. 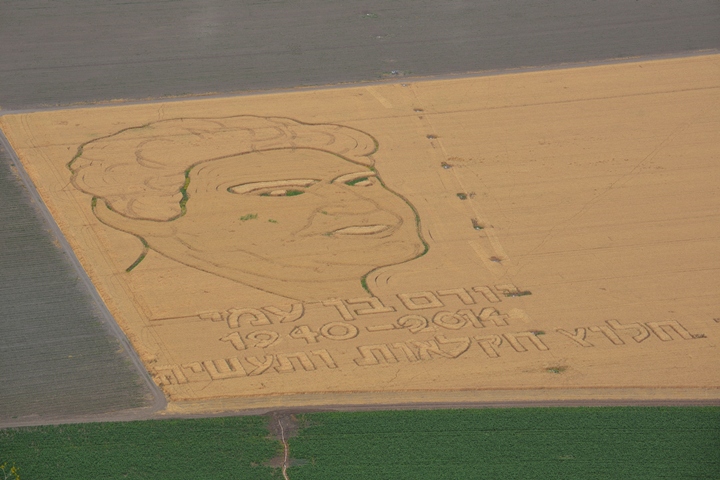 A nature trail (marked with green and double while strips) takes you along the edge of the hill, back to the parking area. 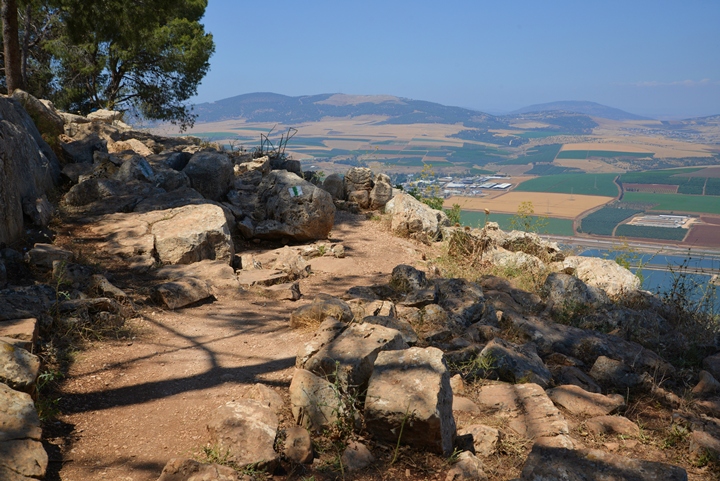 The soil washed away, leaving a barren surface. Pine trees were planted here in modern times, providing shade and the green colors. 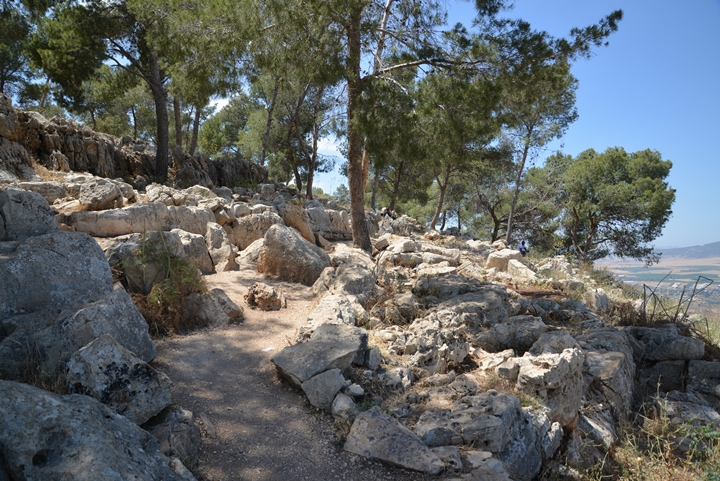 Along the trail are the amazing views of the fertile Jezreel and Beit Shean valleys, as a juxtaposition to the barren surface of Mt. Gilboa. This panorama will for surely charge your soul – changing your mood from the brown rocky surface to the green and blue carpets of the valleys. 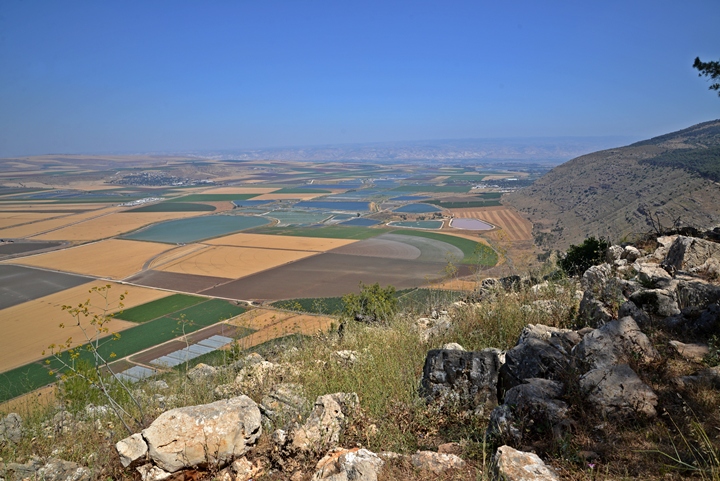 Huge boulders line up along the trail. 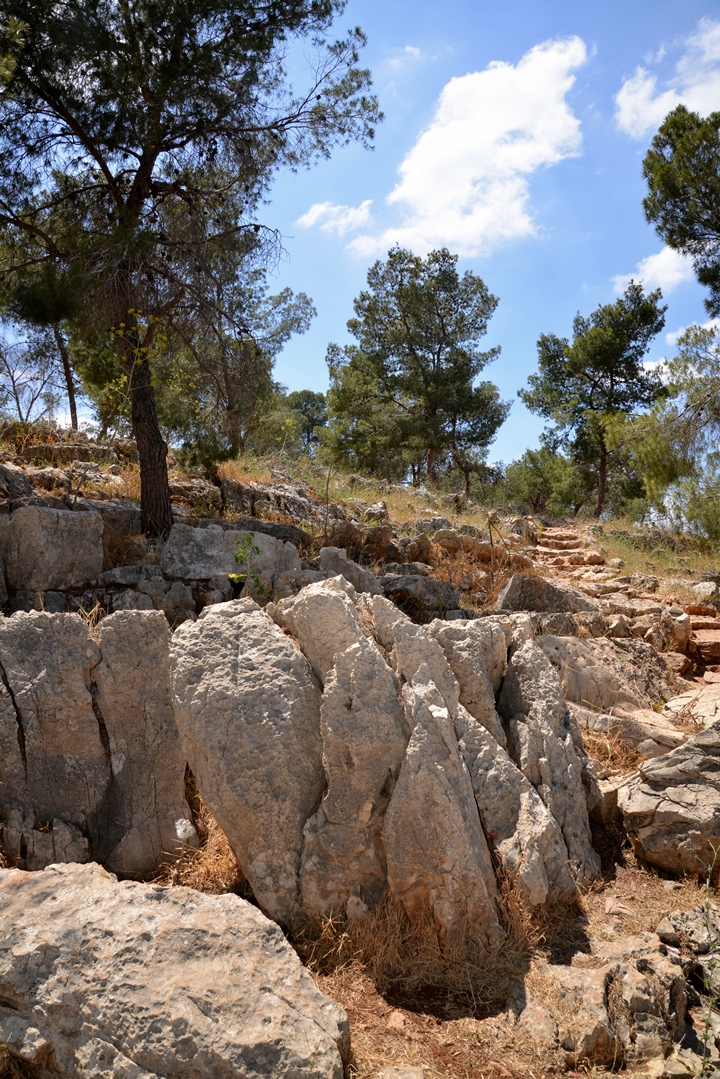 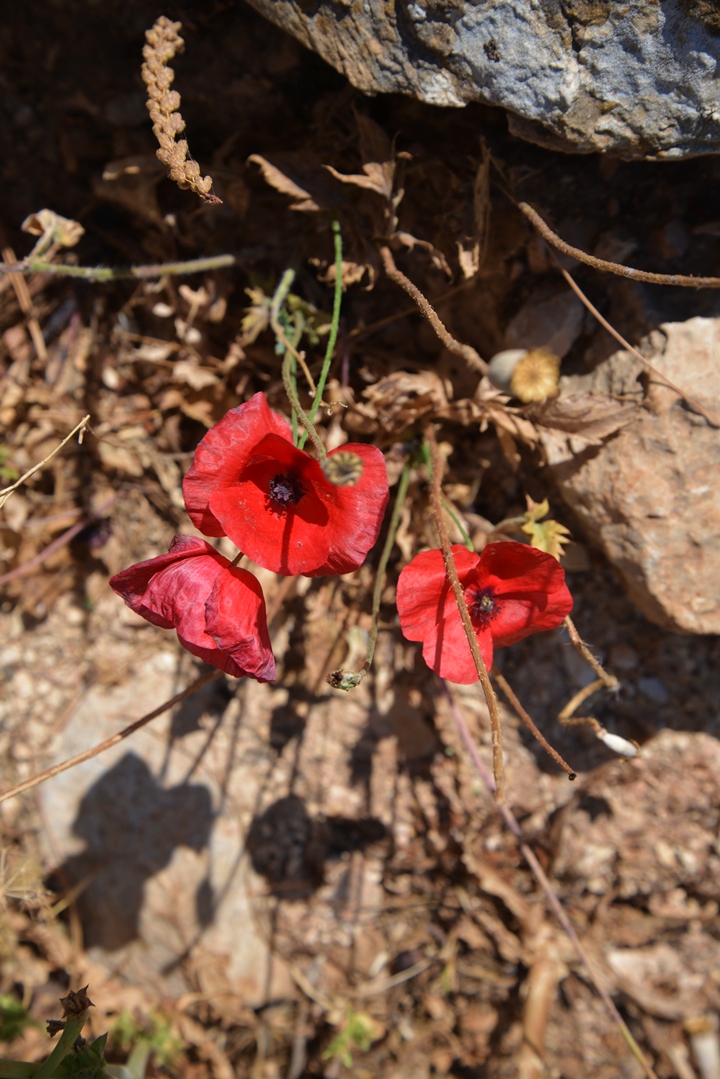 Near the peak are evidence of ancient structures and installations, such as this hewn  burial cave. 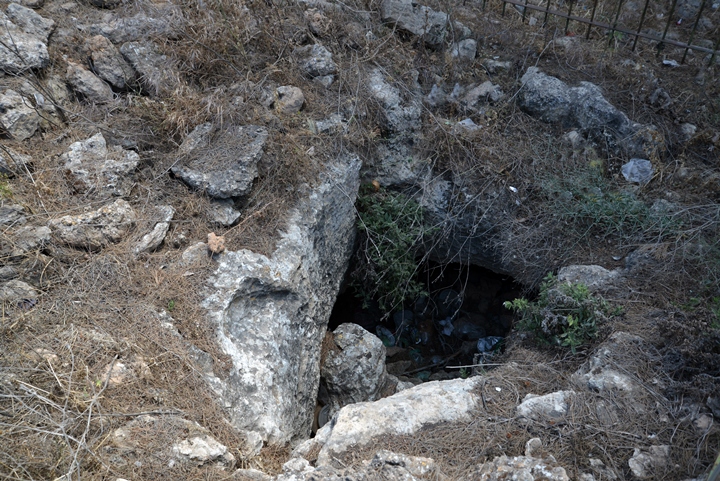 In addition to Mt. Saul, Mt. Gilboa has another 10 peaks, with the highest is Melchishua (alt. 536m) – named after Saul’s son.  Mt. Barkan is one of the other peaks, about 4km south east of Mt. Saul, at an altitude of 497m above sea level.

On Mt. Barkan is a KKL observation tower, with great views of the valleys around Gilboa and around the north east side of the mountain. KKL (Keren Kayemet LeIsrael), the Hebrew name for JNF (Jewish National Fund), is Israel’s largest green NGO. The organization, established in 1901, plants trees, establishes parks,  and develops communities. 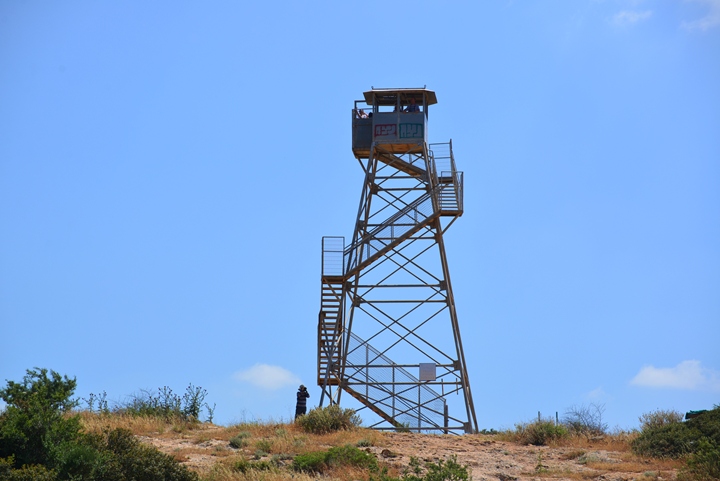 In the following photo is a view of Mt. Saul. The observation site of Saul’s shoulder is the bright spot on the peak of the hill. Behind it is the fertile Jezreel valley. 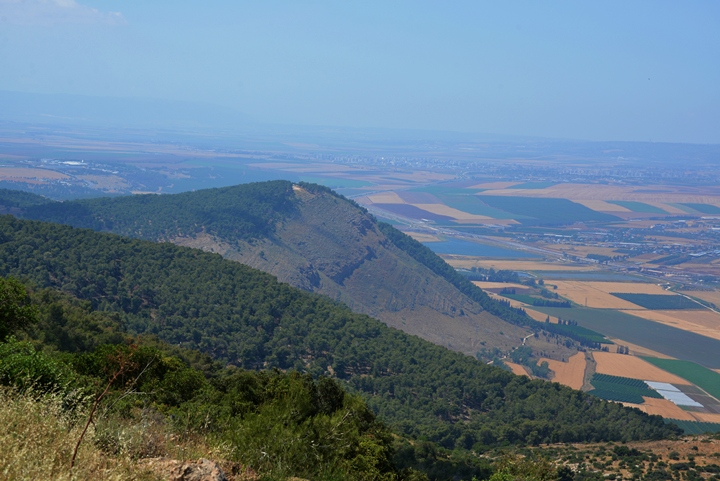 This page was last updated on Feb 6, 2017 (Added Mamluke history)