Ruins of a Franciscan chapel on a south hill near Mt Precipice, and was named after the traditional site where Mary, mother of Jesus, stood when her son was about to be thrown from the hill.

Home > Sites > Nazareth > Our Lady of the Fright (Mary’s fear)

This chapel has several names: Mary’s fear,  Our Lady of the fright, Notre Dame de l’Effroi. It is called after a tradition that Mary, Mother of Jesus, was standing at this spot when her son was led to the edge of the mountain, about to be thrown away, and was frightened.

Luke 4 29: “And rose up, and thrust him out of the city, and led him unto the brow of the hill whereon their city was built, that they might cast him down headlong”.

Its dominant location on the south edge of the city makes it highly visible in parts of the city.   The church was in ruins for many years, until it was recently restored.

The ruins of the Church is located on a small hill (360M) north to Mount Precipice, on the south-east side of Nazareth. It is is the middle of a barren hillside, which is hard to reach. There is a steep path up from the old quarry at the foothill, and the prize of the hike is a beautiful panorama of the valley below and the view of the remarkable structure.

An easier access is from the new shopping center on the north side, although there is no official entrance there. We hope the municipality of Nazareth will arrange a more organized path, since this is one of the most charming places in the area.

An aerial map is shown below. The church is located in the center of the barren hill. 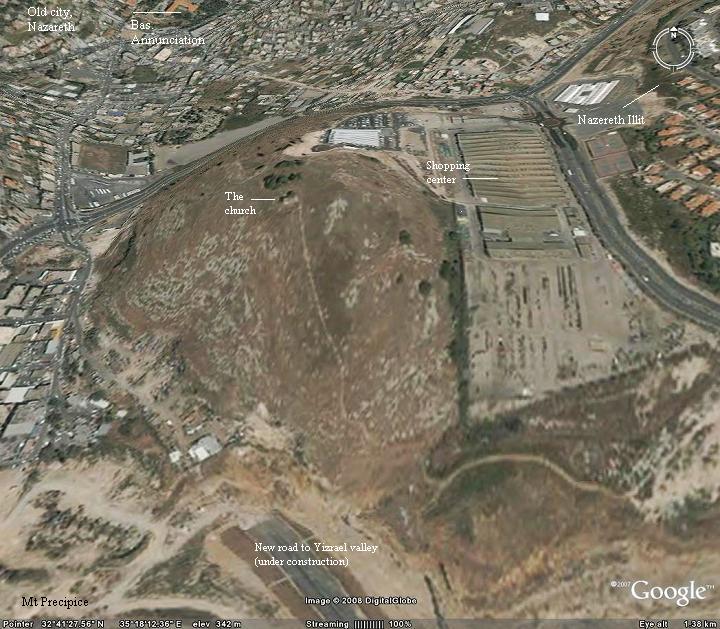 This Franciscan church was built in 1882 on the site of an earlier Crusader monastery.

The church was in ruins for many years, but restored in 2009.

This aerial view was taken in June 2015, captured by a quadcopter from the north side. The church – already restored at this time – is seen at the top of the hill. It overlooks Mt Precipice (left background) and the south side of Nazareth (right background). 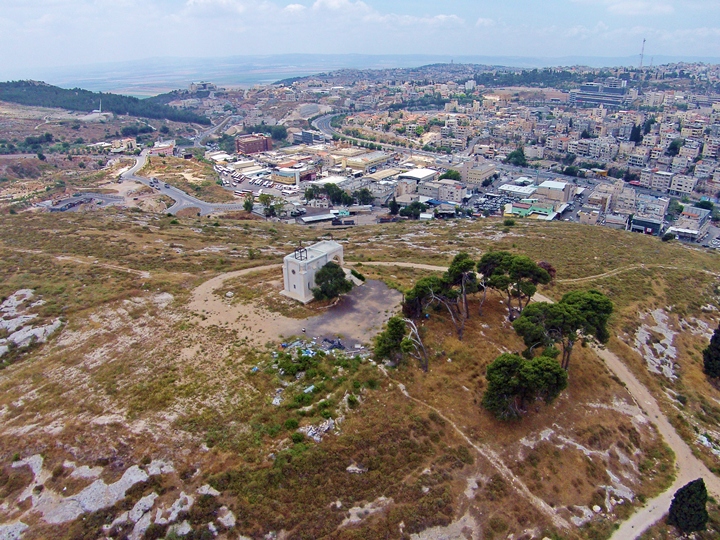 The photo shows the ruins of the Church from the road that leads to Mt precipice. The following photos were taken in 2008 before the church was restored. 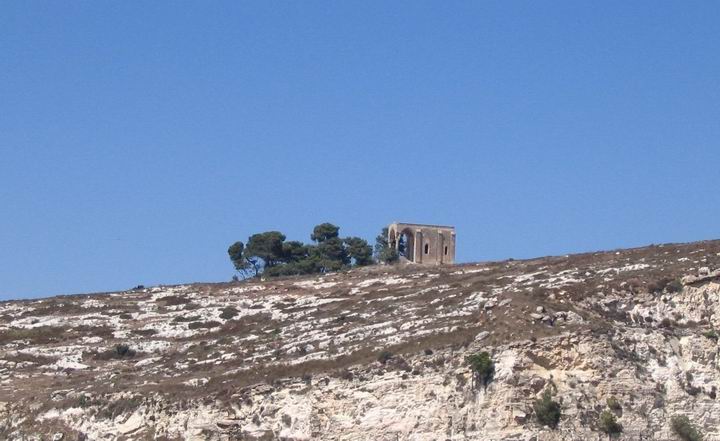 A closer look from the western slopes that face the old city. 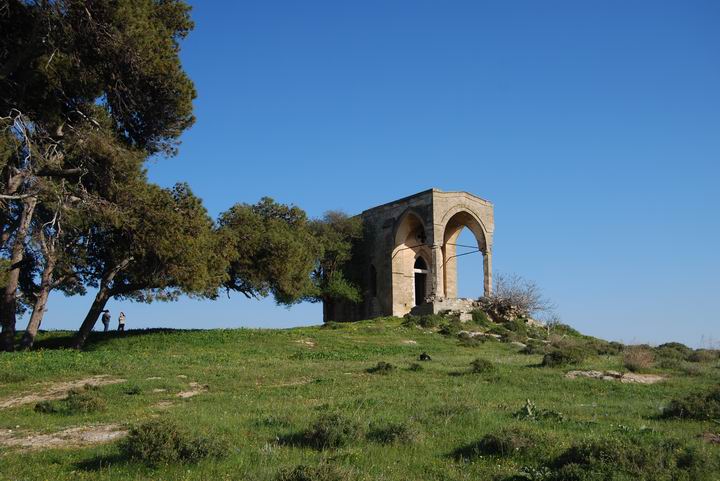 The photo below is a view of the East side of the church. 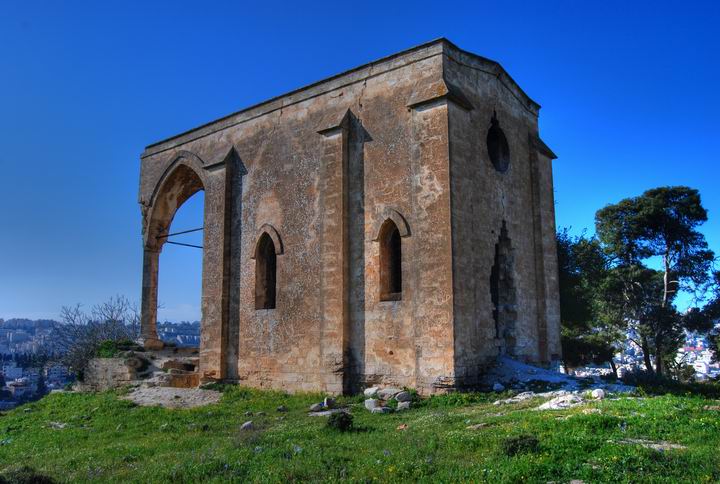 Another view from the east. The old city of Nazareth is seen behind it. 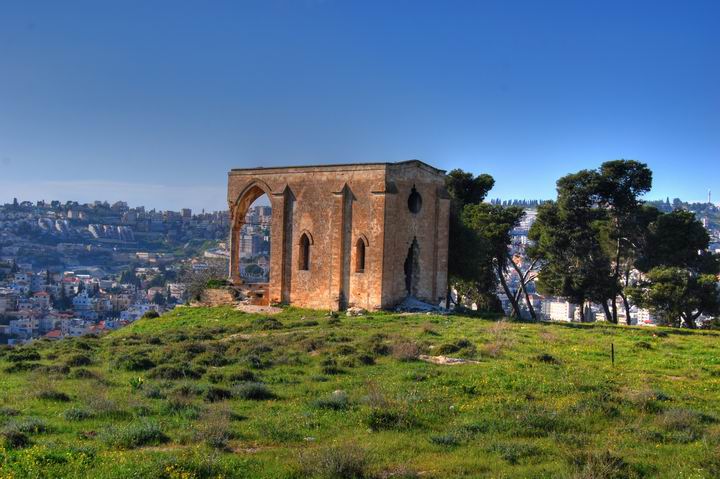 A closer view of the ruined North-Eastern entrance. 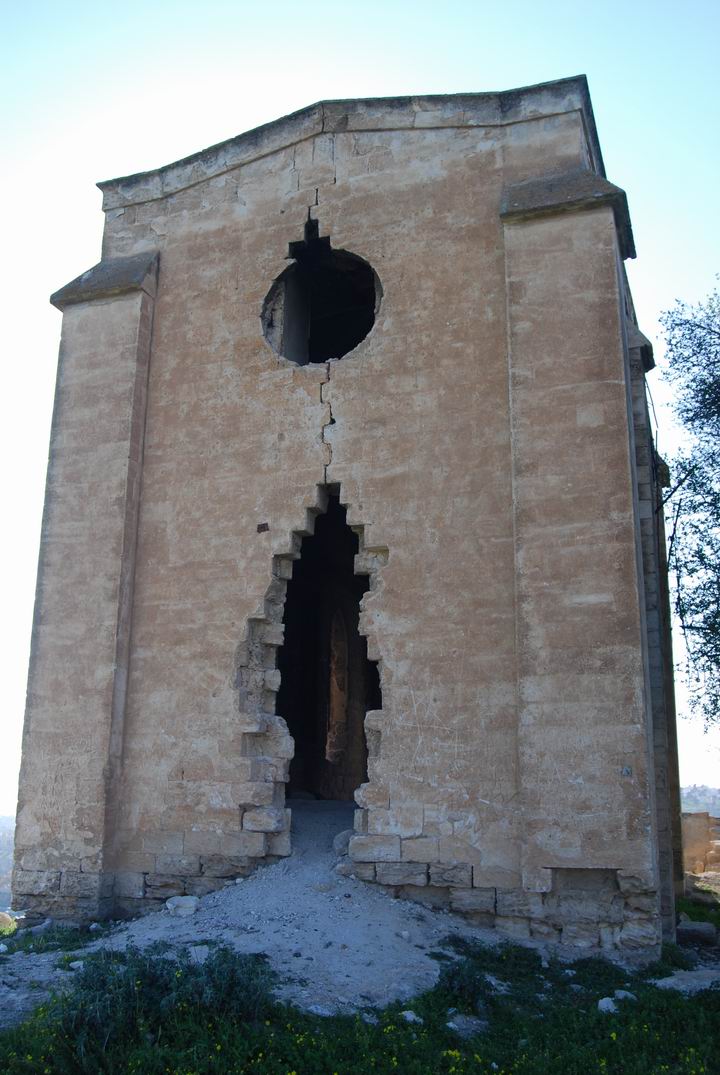 A view from the south side, with Webmaster Rotem. 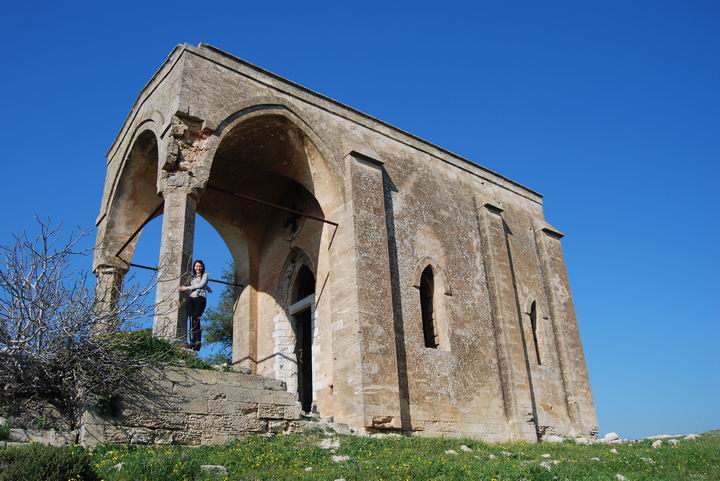 Another view from the west side. 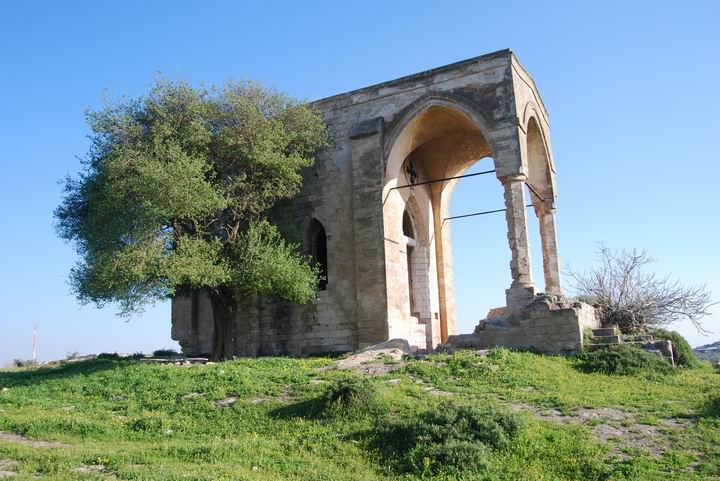 Inside the church all  walls are completely stripped, as seen below. 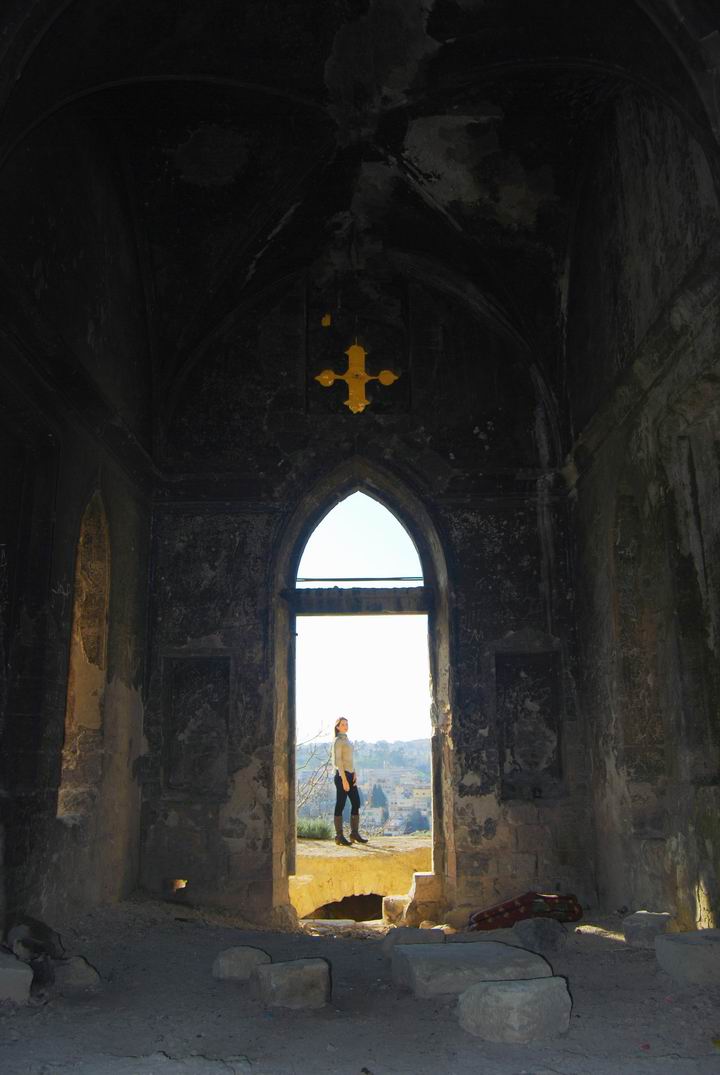 Another view of the northern-eastern entrance, from the interior. 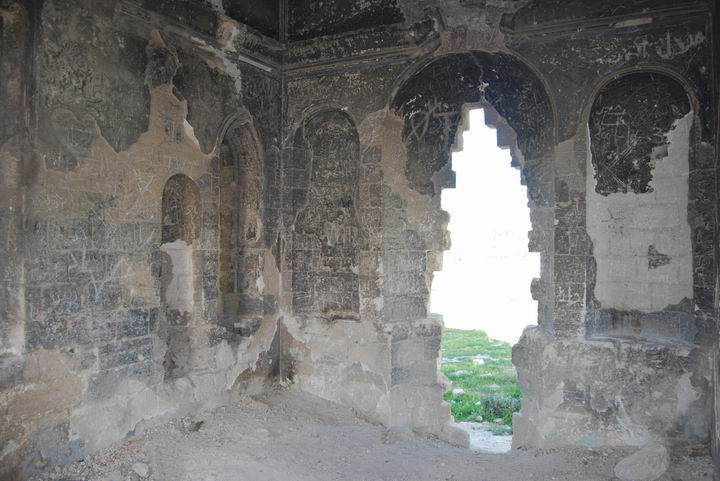 In 2009 the ruined structure was restored. The following north view photo was taken in June 2015. 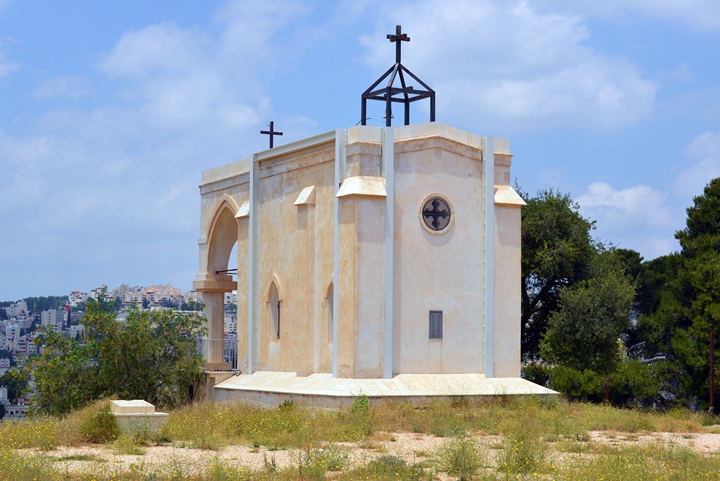 A view from the south side: 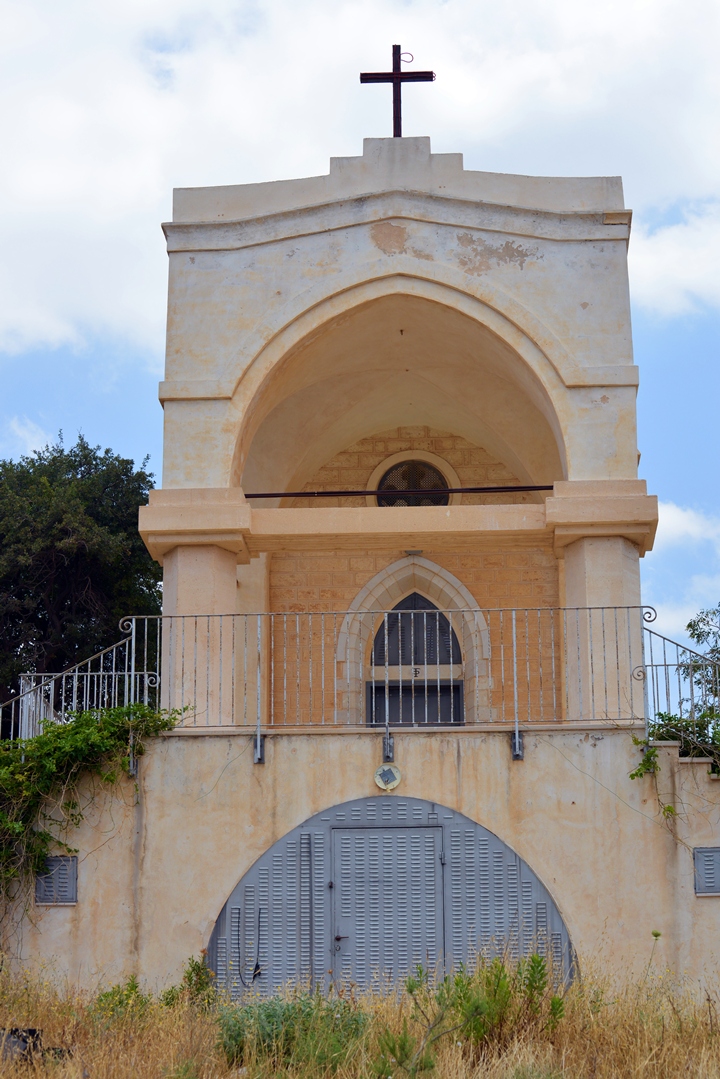 (f) Views from the site

There are remarkable panoramas from the site. The photo below shows a view towards the church district in the old city of Nazareth. The Basilica of Annunciation is seen in the center. 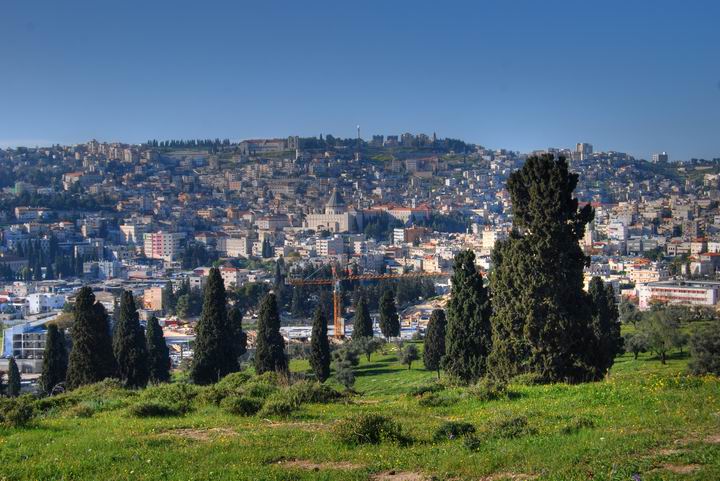 At the eastern edge of the hill is another beautiful view of the valley of Jezreel (Yizrael), with Givat Hamoreh in the far background. The village of Naim (Nin) is on its northern foothills on the left side, where Jesus performed a miracle, bringing back to life the only son of a widow. 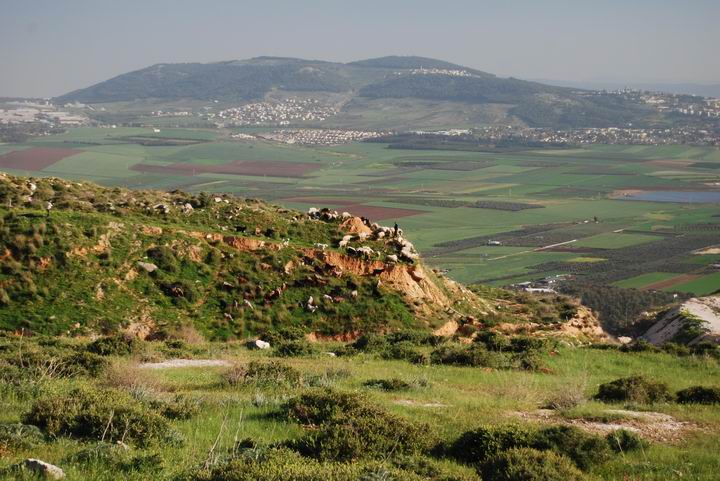 View from the church of Our Lady of the Fright  towards the south-west. The hill in the background is Mt precipice, and the road that leads to its summit is seen on its foothills. According to tradition, Mary was standing at this spot when her son was led to the edge of the mountain, about to be thrown away, and was frightened. 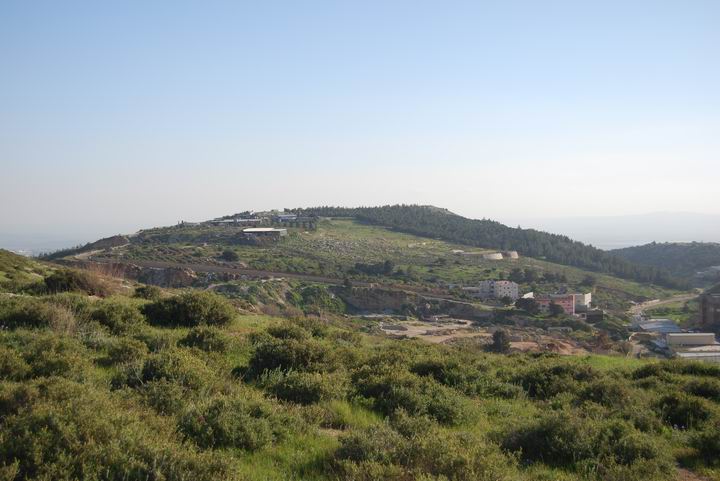 Around the church are many rock-hewn installations, such as winepresses and cisterns. 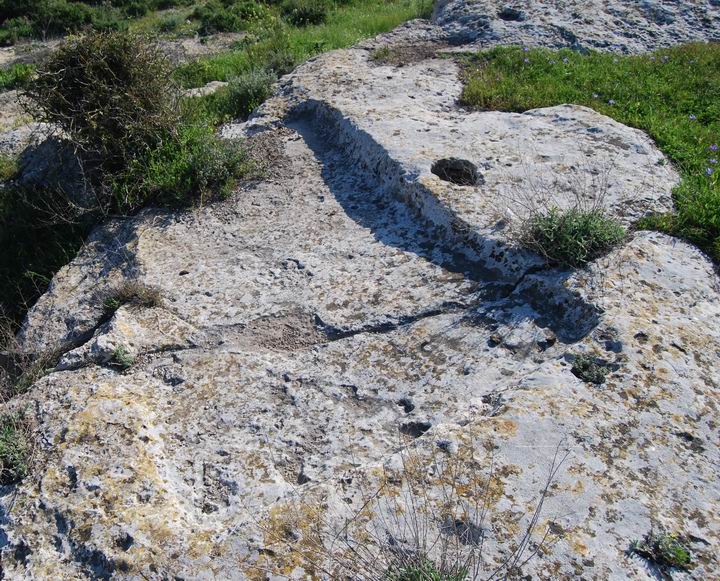 In early spring there are many wild flowers growing on the hill, such as the Iris below. The specie is called Vartan’s Iris (“Irus Hasargel” in Hebrew), which grows in the Galilee. 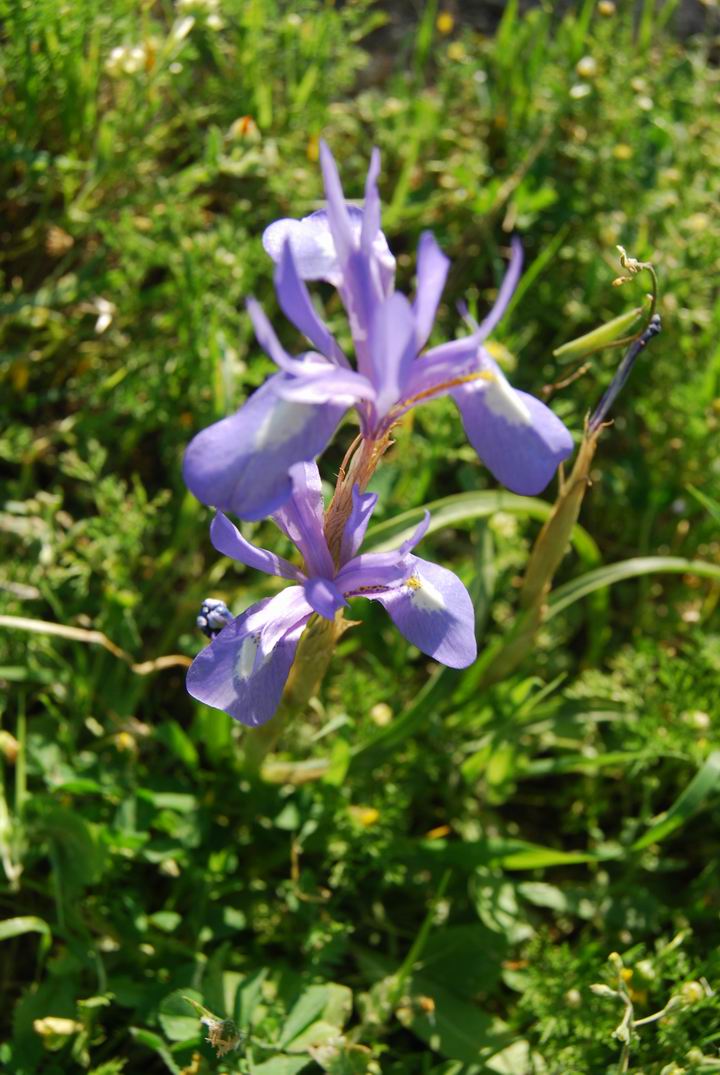 This story tells about how angry Jewish worshippers drove Jesus away from the Synagogue, attempted to throw him of the cliffs, and he disappeared before their eyes “in the midst of them”.

“And he came to Nazareth, where he had been brought up: and, as his custom was, he went into the synagogue on the Sabbath day, and stood up for to read. And there was delivered unto him the book of the prophet Esaias. And when he had opened the book, he found the place where it was written, The Spirit of the Lord is upon me, because he hath anointed me to preach the gospel to the poor; he hath sent me to heal the brokenhearted, to preach deliverance to the captives, and recovering of sight to the blind, to set at liberty them that are bruised, To preach the acceptable year of the Lord. And he closed the book, and he gave it again to the minister, and sat down. And the eyes of all them that were in the synagogue were fastened on him. And he began to say unto them, This day is this scripture fulfilled in your ears.

And all bare him witness, and wondered at the gracious words which proceeded out of his mouth. And they said, Is not this Joseph’s son? And he said unto them, Ye will surely say unto me this proverb, Physician, heal thyself: whatsoever we have heard done in Capernaum, do also here in thy country. And he said, Verily I say unto you, No prophet is accepted in his own country. But I tell you of a truth, many widows were in Israel in the days of Elias, when the heaven was shut up three years and six months, when great famine was throughout all the land; But unto none of them was Elias sent, save unto Sarepta, a city of Sidon, unto a woman that was a widow. And many lepers were in Israel in the time of Eliseus the prophet; and none of them was cleansed, saving Naaman the Syrian. And all they in the synagogue, when they heard these things, were filled with wrath, And rose up, and thrust him out of the city, and led him unto the brow of the hill whereon their city was built, that they might cast him down headlong. But he passing through the midst of them went his way”. 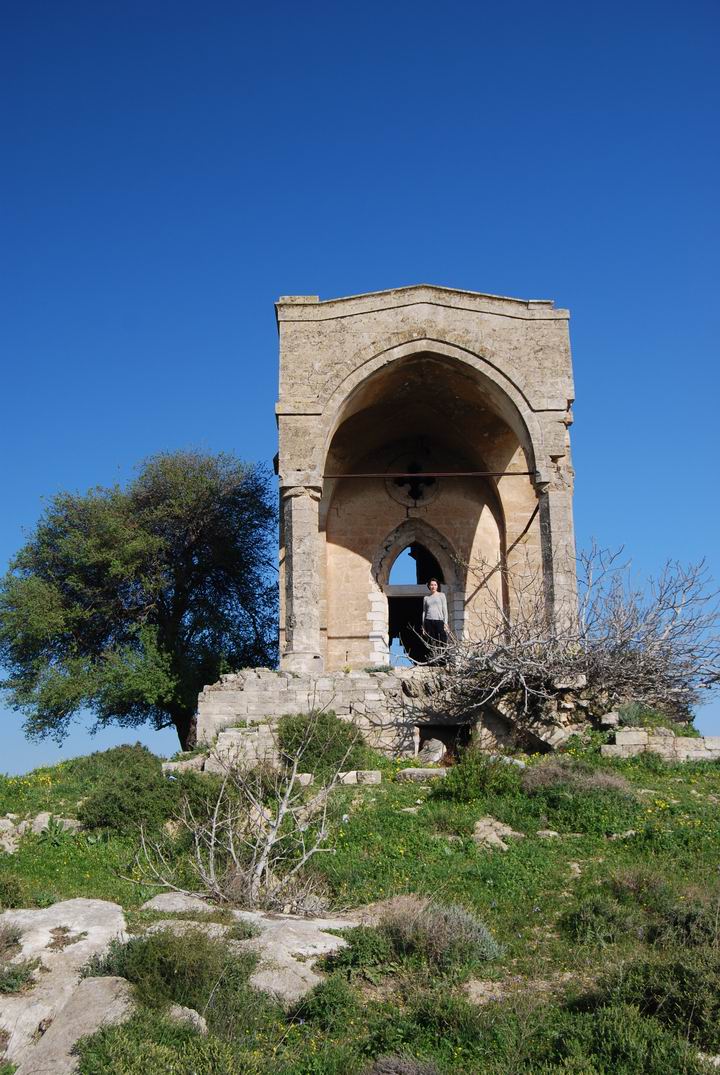 View of the church before the restorations, captured from the south-west side – with Webmaster Rotem

This page was last updated on June 12, 2015 (Added aerial view, update of restorations)