An ancient city on the ancient road from west (Shefaram, Acre) to east (Sepphoris, sea of Galilee). The site existed for over 4000 years.

The site is located on the ancient road from Shefaram (and westwards to Acre), and eastwards to Sepphoris, Nazareth and east to sea of Galilee. This road existed for thousands of years, and even today the road passes exactly at the site, slicing it into two. On this road are the ruins of a small city that existed for over 4000 years.

The site is located 2KM east from Shefaram, and the modern road turns around  the site, on the north and east side of it.

This is the aerial view of the area from the west side.  The site is easily accessed from the old road to Nazareth, as indicated on the photo. 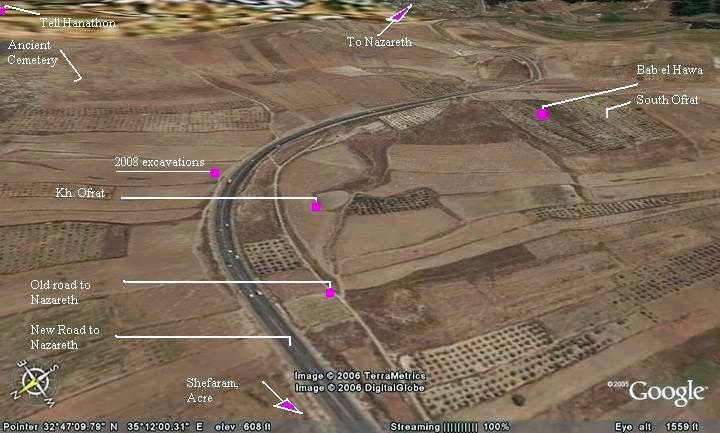 The Tell was inhabited starting in the Middle bronze period (2200-1550BC), as determined by the archaeological survey. In the south side of the Tell, just above the ancient road that passes it, there is a high (3M) wall that was probably built in the late Iron Age (Israelite period, 1000-586BC). Scattered around the area of 20 Dunam (2 Hectares) are many fragments of ceramics, building blocks, and pillars. The findings are mostly from later periods: Persian, Early Roman, Late Roman, Byzantine, Mamluk and Ottoman.

The ruins of the site (appears as Kh. et. Taiyibeh, marked by an orange square) were  examined in the Palestine Exploration Foundation (PEF) survey (1866-1877) by Wilson, Conder and Kitchener.    A section of their map is shown here. 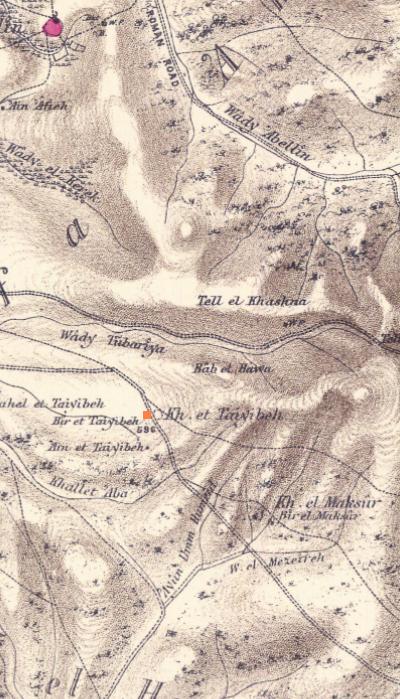 Notice the double dashed line on the map – the path of the ancient roads that crossed the city from Shefaram to Sepphoris.  Another road passed in the valley on the north, that connected to Hannathon and Sepphoris. Another northern road is not far, traversing via ‘Abellin valley from Acre to Sepphoris (marked “Roman road” on the top of this section).

In the 1980s a new highway (#79) was constructed here, which replaced the narrow British road. It split through the site, cutting it on the north and east side.  In 2008 this highway was planned for expansion, so excavation digs were conducted along the north side of the road, revealing middle-Roman structures.

The photo below shows  a view of the site on the ancient road. On the left side is a wall, and in the background is the Tell and the high wall. On the right side is an olive grove. 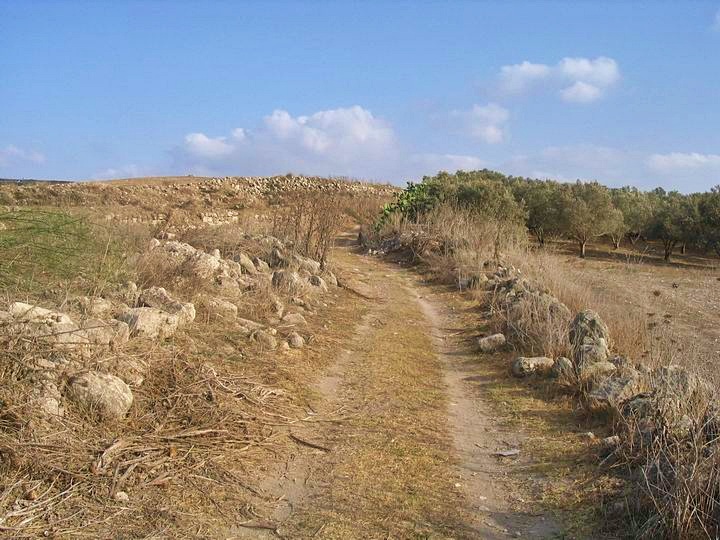 This is the ancient wall, 3M height, which may be from the Israelite period. The road passes to the right of this wall. On the bottom right side is a well that was used by the travelers as drinking water. 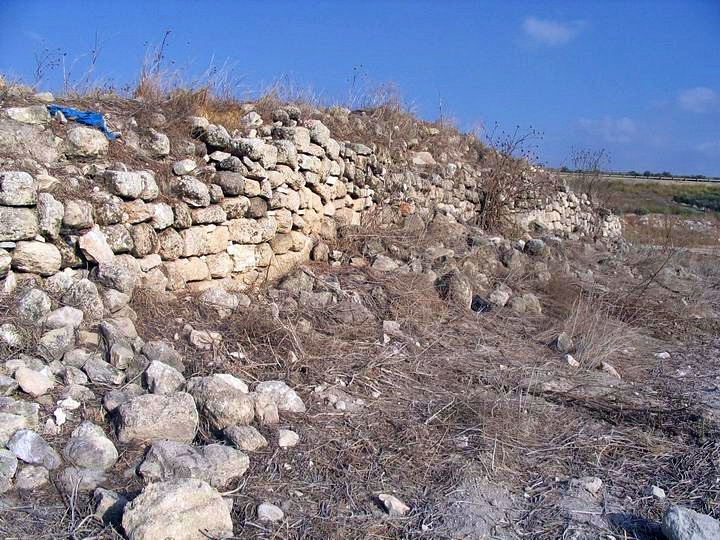 We visited the site several times. Every time we were alarmed by a large snake that came down from the wall or near it.  It is recommended to wear long shoes and be careful…

The photo below shows the well, which is covered today. 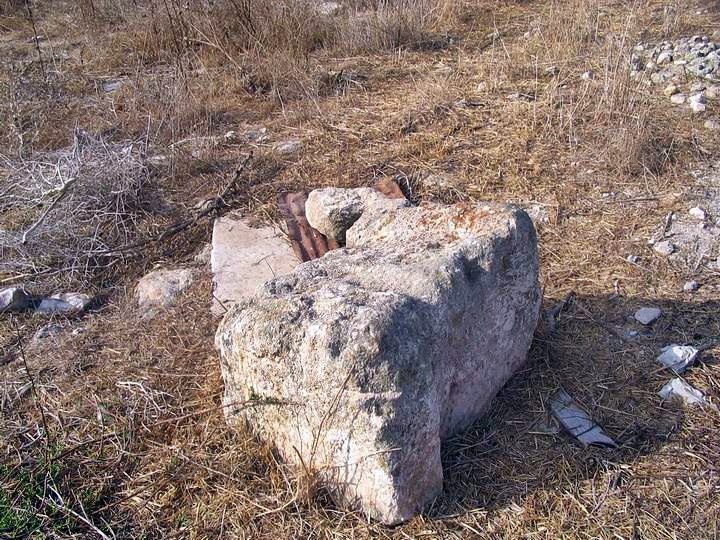 This is one of the large stones in the site. There were many pillars here, most of them were stolen in recent years. Some of the pillars had the shape of a heart, which may be part of the Roman period Synagogue. A part of milestone was found here as well, which was part of the Roman road. 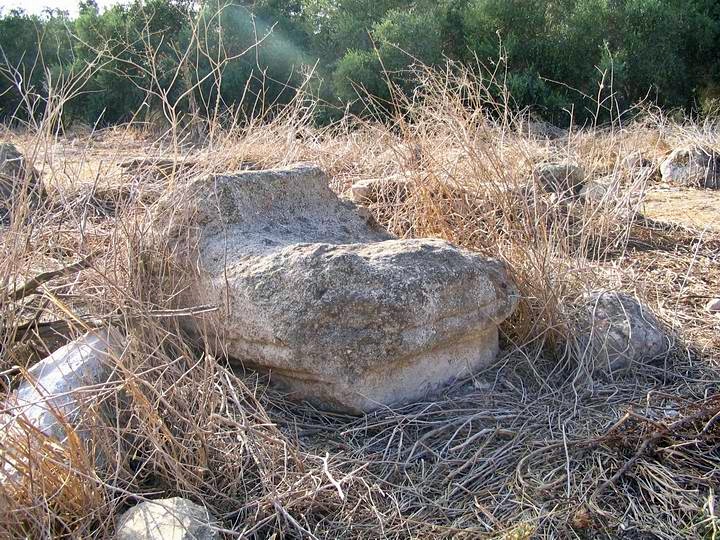 (c) View from the south

The following photo is a view from the south side (marked as Bab el Hawa), after the road turns around the site. Khirbet Ofrat is seen in the center. On the left background is Shefaram, where the road to Acre passed. On the right background is a modern quarry. 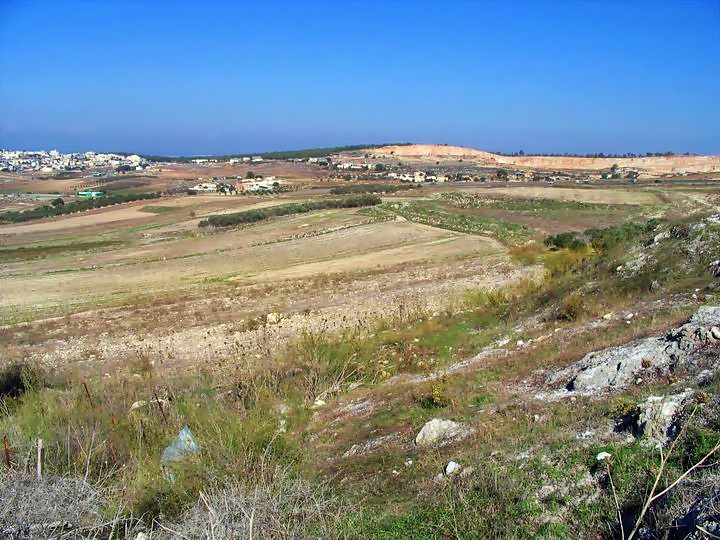 An excavation consisting of ten squares was opened on the north side of the highway, as part of the plan of widening Highway #79. The excavation, managed by Yardenna Alexandre, revealed findings from the middle Roman period, indicating that during this time the village has expanded to the north, probably after the Bar-Kochva revolt. 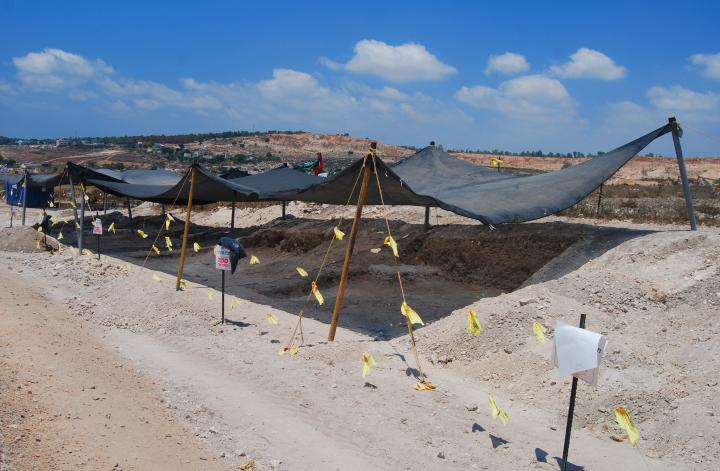 In this text, Josephus, as the northern commander of the revolt against the Romans before he came a writer,  fortified  (66AD) the city of Ofrata as a preparation for the Roman reprisal against the revolt:

“I also fortified, in the Lower Galilee, the cities Tarichee, Tiberias, Sepphoris, and the villages, the cave of Arbela, Bersobe, Selamin, Jotapata, Capharecho, and Sigo, and Japha, and Mount Tabor”