Ruins of a grand winter palace for the Arabic rulers from Damascus. Built in the 8th century AD near Tel Kinneret.

An Arabic palace on the route of the ancient road from Tiberias to the north of the sea of Galilee (Capernaum). It served as a winter palace for the Arabic rulers of Damascus.

A Khan (road hostel) was located nearby, closer to the hill of Tel Kinneret, but there are no traces of it today. It served the caravans from Damascus to Egypt.

The site is located at the north corner of the Sea of Galilee.  While driving from Tiberias to Capernaum, after about 10KM and just before Tel Kinneret, there is a right turn to Karei Deshe youth hostel and Khurvat Minya. This road gets you to the entrance of Khurvat Minya.

This is the aerial view of the area from the south. The ruins of the palace are are located in the field south of Tel Kinneret. 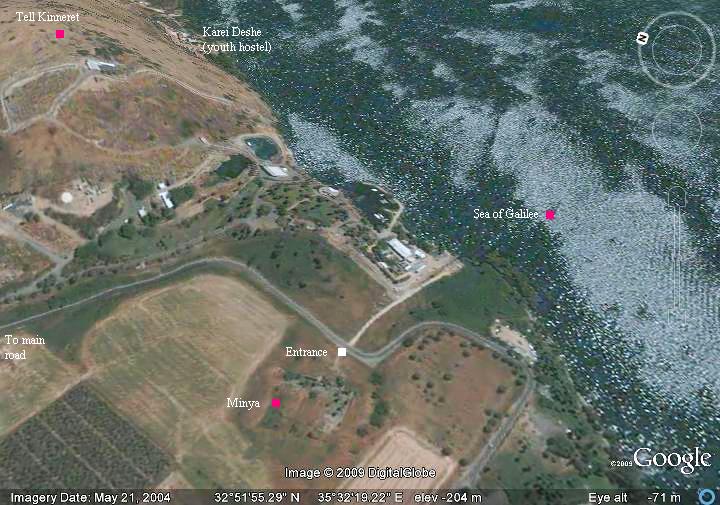 In earlier times the site was located on the major road that connected Egypt to Syria. It is very close to Capernaum, which is located 3 Km to the east. Jesus must have passed this very spot several times on his travels from Capernaum to the Galilee, Nazareth, Judea and Jerusalem.

A Roman/Byzantine Jewish village called Ein-Te’ena (Hebrew for “Spring of the Fig”) is referred in the Talmud (4th century AD). It was probably located around the spring which is located closer to the hill. The Arabic name of the spring, Ein e-Tina (spring of the fig tree), preserved the name of the village.

In the 5th century AD a Byzantine structure was located in the area of Minya.

Minya is an Arab palace, built by the Omayyad Khalif caliph al-Walid I (705-715) from Damascus to serve as a winter palace. An inscription of this ruler was found on a stone in the palace. It was built over the Byzantine building.

The palace was destroyed in the severe earthquake of 749 AD that caused an havoc throughout the Galilee .

Conder and Kitchener surveyed this area during the Survey of Western Palestine (SWP), commissioned by the Palestine Exploration Fund (PEF) in 1873. A section of their map is seen here. Kh. Minia is marked in the center of the map. The spring of ‘Ain et Tineh is located near it, as well as Khan Minia. Tell Kinneret (Kh. el ‘Oreimeh) is to the north of the site. Tabghah is farther along the shore. 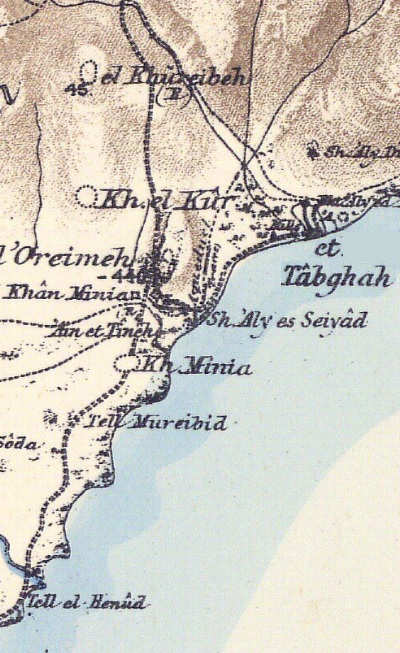 Its ruins were first excavated in 1932–1939 by E.A. Mader and O. Puttrich-Reignard,  on behalf of the German Görres Society and the Museum of Islamic Art of Berlin. Some of its excavated items are on display in the museum in Berlin.

The excavated ruins are open to the public.

An aerial view of Khurvat Minya was captured by a drone from the west side. The Sea of Galilee is seen in the background. 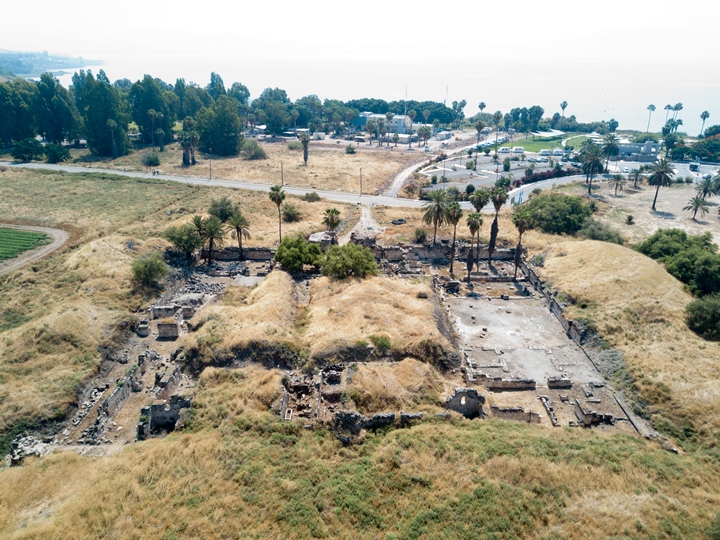 A view of the site from Tel Kinneret, seen in the center of the next image. In the background is Ginnosar, and behind it – the Arbel Cliffs on the right and the sea of Galilee on the left. 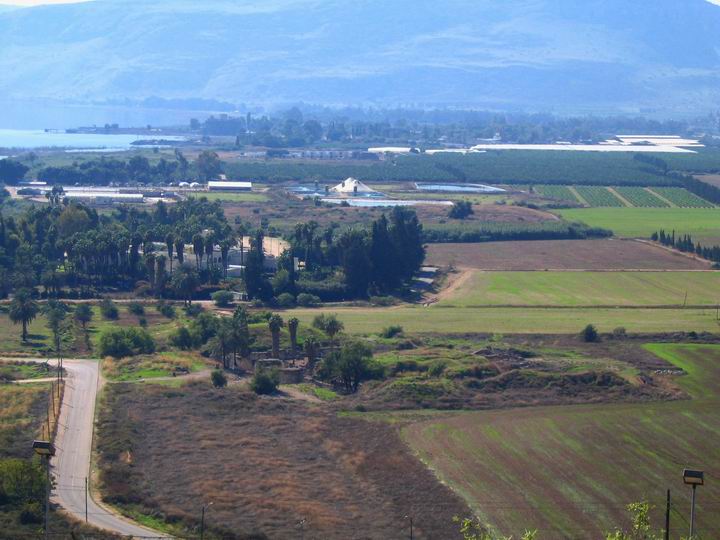 This is the entrance to the palace from the sea (east) side: 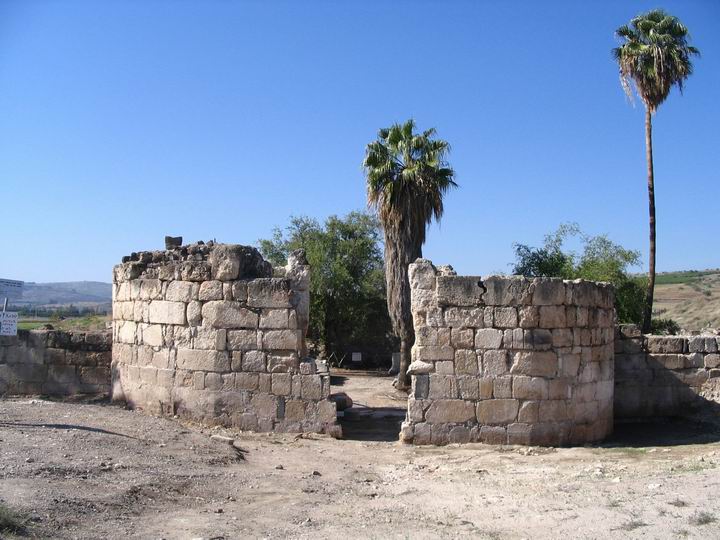 On the south side – the ruins of the palace: 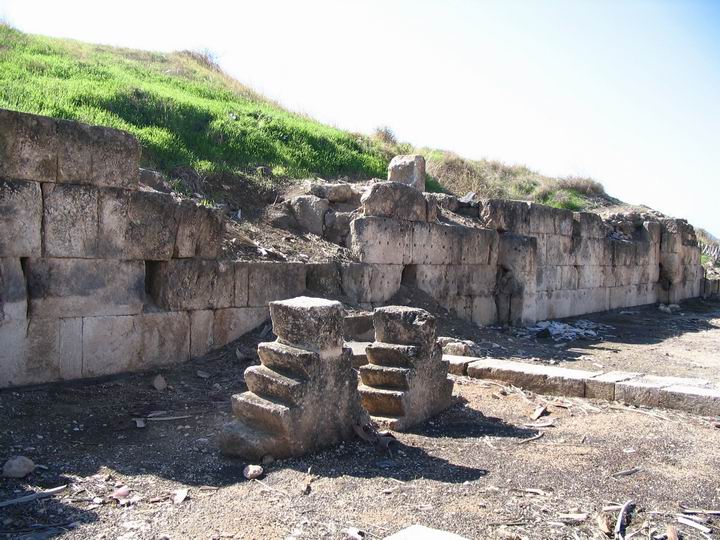 The view of the palace on the west side: 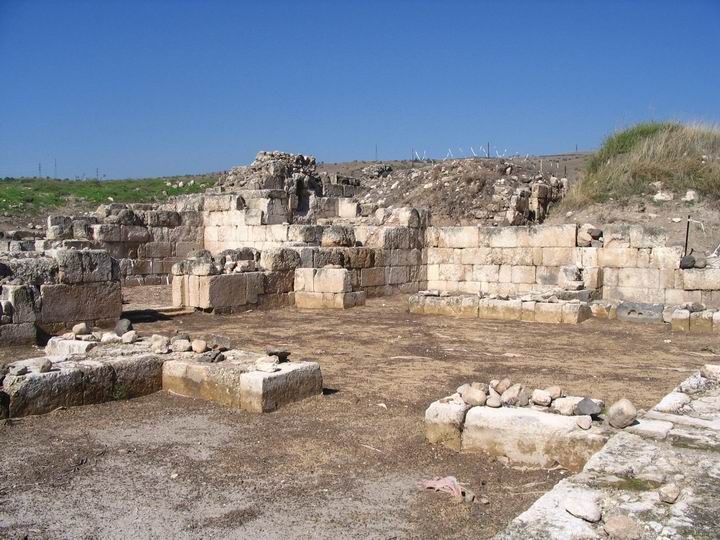 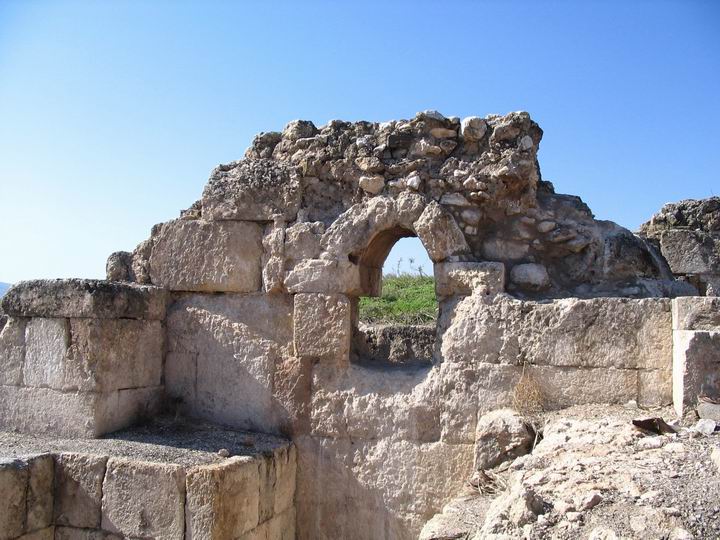 View of the palace from the west side is in the next photo. The sea of Galilee is seen behind the palm trees. 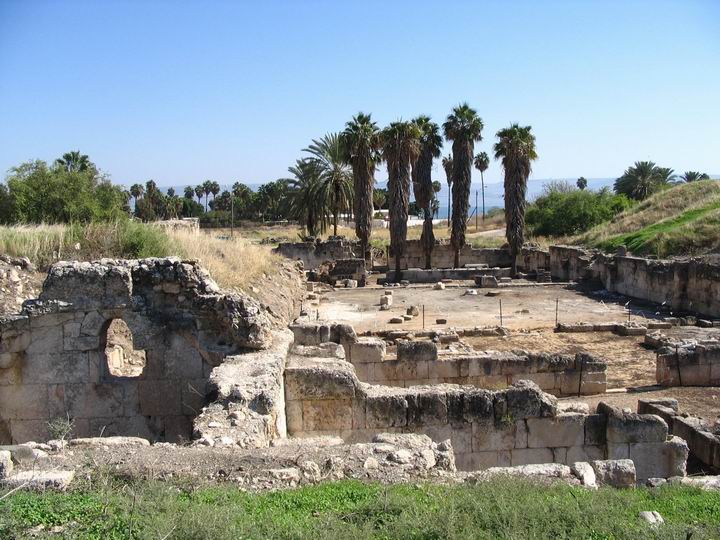 A view of the north side of the palace: 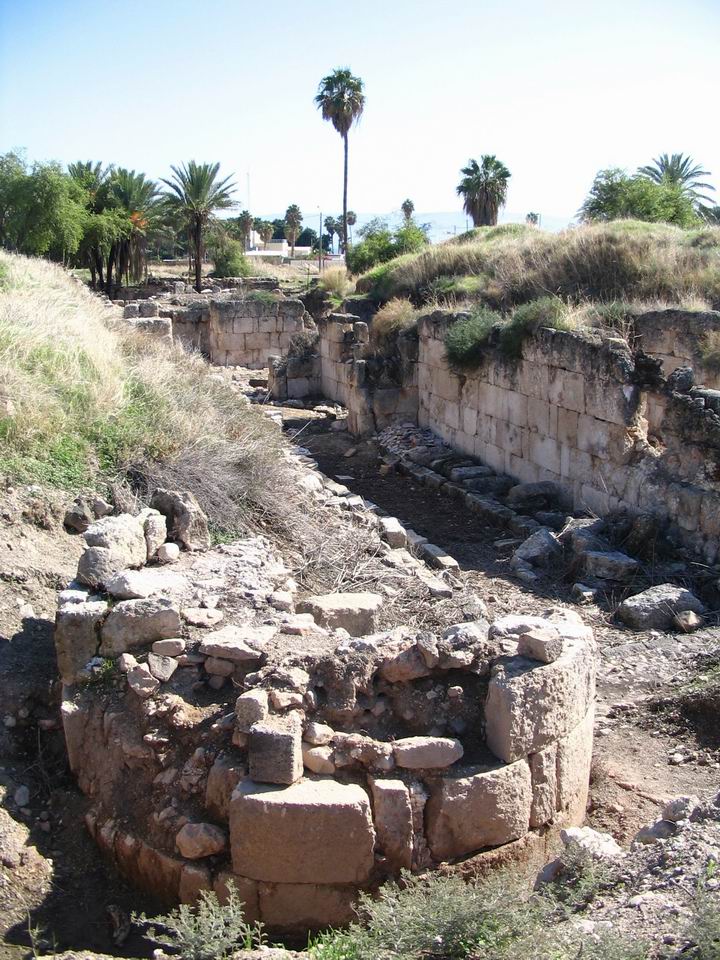 View of the east side of the palace: 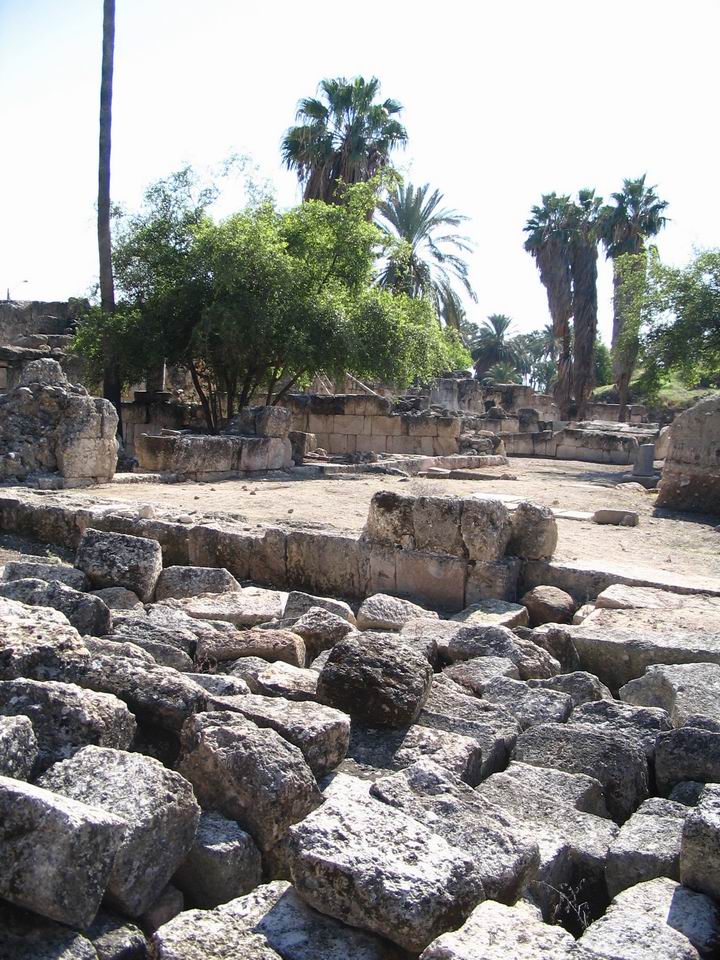 His article was published on  Dec 26, 1884, with the title “Sea of the Galilee”, where he tells his readers about his visit to the site of Minya. At his times the scholars still debated whether Minya was Capernaum, the city of Jesus, or was it located in the ruins north-east to Minya, called Tell-Khum. His opinion that Minya was not the city of Jesus, and he later visited the ruins of Tell-Khum.

It is a recommended  book for the period of rediscovering the Holy Land.

Thomson’s  illustration of the spring and Tel Kinneret behind it (p. 412): 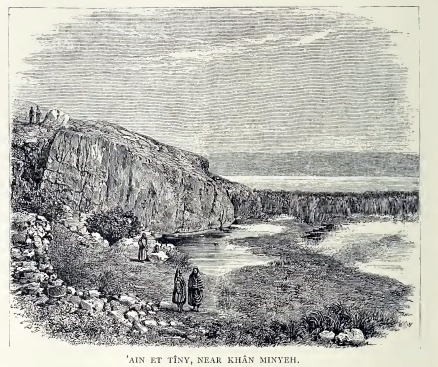 He continued describing the aqueduct found above the spring (p. 415):

Lieutenant Kitchner adds: “Round the southern brow of this hill [above ’Ain et Tiny], where’the rock runs steeply down to the lake, is the rock-cut aqueduct now used as a road, and described by Major Wilson. It is fifty-two feet four inches above the sea, which is almost perpendicularly beneath it at one part, and has a fall of seven feet in the mile: the water would not have been carried far on the plain, but would have watered the gardens round Khurbet Minyeh.”