In the lower northern slopes of Migdal Haemek are the ruins of an ancient village, from the Bronze age to the Roman period. This village is located on the old road from Yizrael Valley to Yafia, Nazareth and Sipphoris.

There are also  traces of ruins of the small Arab village of Mujeidal on the top of the hill, including its Churches. This village is located on the old road from Yizrael Valley to Yafia, Nazareth and Sepphoris.

The modern city of Migdal Haemek is located 3 KM from Nahallal junction, on the road to Nazareth.

In the Roman periods (and earlier) the ancient road started near Tel Shimron, passed the southern side of Migdal Haemek, then climbed up through the valley to Yafia, a large village at the time of Jesus. It then passed near Nazareth and continued to Sepphoris.  The ancient village was built closer to the road, on the lower northern slopes.

The Arab village is built on the top of the hill, near the new road to Nazareth. Today this is the center of the new city of Migdal Haemek.

The site was inhabited at the early Bronze age (3500-2000 BC), and was a small agriculture village – according to the survey of the winepresses, rock-cut tombs and quarries that testify that the village was based on agriculture and stone cutting.  The wine presses are typical of the early or middle Bronze age (2000-1600BC). These industrial and agricultural installations continued to be in use throughout the Iron Age, Hellenistic, and Roman/Byzantine period. The village also serviced the ancient road that was adjacent to the site.   The quarries continued to be operated during the early Muslim period.

The small Arabic village  (Mujeidal) was built on the higher slopes of the hill.

The area of was  examined in the Palestine Exploration Foundation (PEF) survey (1866-1877) by Wilson, Conder and Kitchener.   The map here is a section of their survey results.  The road that passed through the village, indicated as double dashed lines, toward the right side, arrives at Jaffa (Yafia) and then continues to Nazareth. 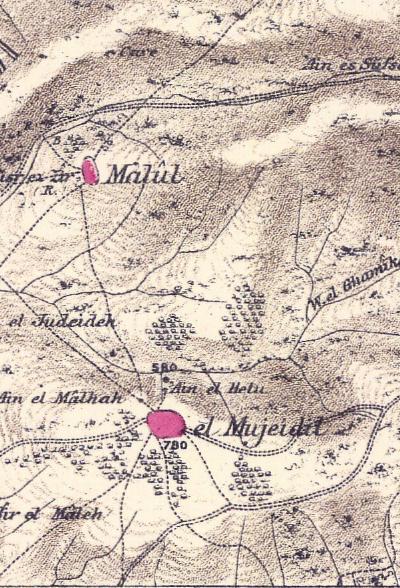 The site of El Mujeidil (ancient Migdal Haemek) is described in their report (Vol 1, Sheet V) on page 275:

“El Mujeidil – A nourishing village on high ground. The place is built of mud and stone, and stands on the northern side of a small plateau, where the thrashing-floors are placed. There are fine olive groves east of the village and south of it. On the north the valley is rough, but not deep. The camp was here established near the principal spring (‘Ain el Helu), the supply from which was nearly exhausted in October, 1872. There is another spring of bad water (‘Ain el Malhah) near, and a third – a pit cut in rock (‘Ain el Judeideh) farther down the valley. The inhabitants are principally Moslems, but there is a Protestant mission with a fluctuating congregation, and there are orthodox Greeks in the village. The population is stated by Consul Rogers, in 1859, at 800 souls, and the cultivation at 100 feddans”.

In 1931 census there were 1044 Muslims and 197 Christians. During 1948 the villagers fled the village, and most of it was was destroyed, sparing 2 Churches. The new city of Migdal Haemek was later built around these hills, and in 2006 the population is over 25,000.

In the last 20 years a major Industrial Park (Ramat-Gabriel) was constructed to the north of the ancient industrial and agricultural installations. Thus – History completed a full cycle….  The industries include a large Semiconductor fabrication (“Tower Semiconductor”), electronic and plastic assembly, textile and Hi-Tech.

The agriculture has moved out the the Kibbutz settlements, like Nahalal. Amazingly, the ancient wine pressing tradition continued in the area – there are many “Boutique” wineries that operate in the valley. Again – History repeats itself!

A view of the northern neighborhood is seen in the photo. In the background is the valley of Jezreel (Yizreel), and behind it, in the far left side, is the north eastern side of Mt. Carmel. 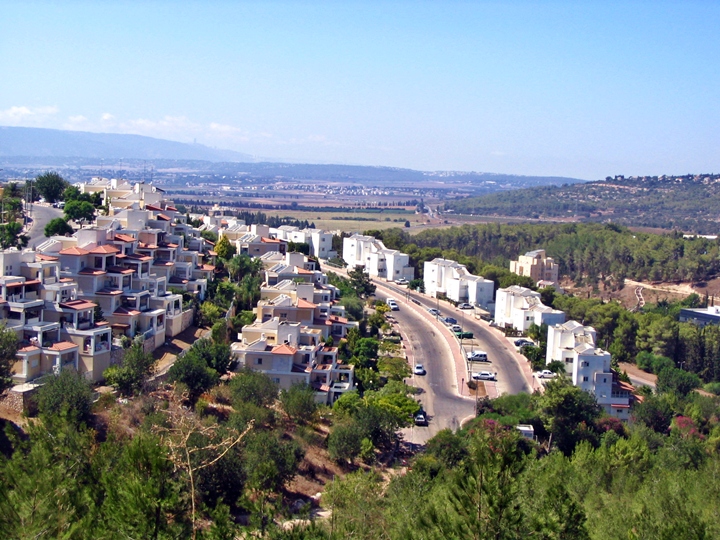 The modern city is located in an area with ancient remains of a village that existed here from the Early Bronze Age. Two Churches remain from the ruined Arab village, located on both sides of the main road to Nazareth.

The following photo shows the church of St. Nicholas on the top of the hill, north of the main road. 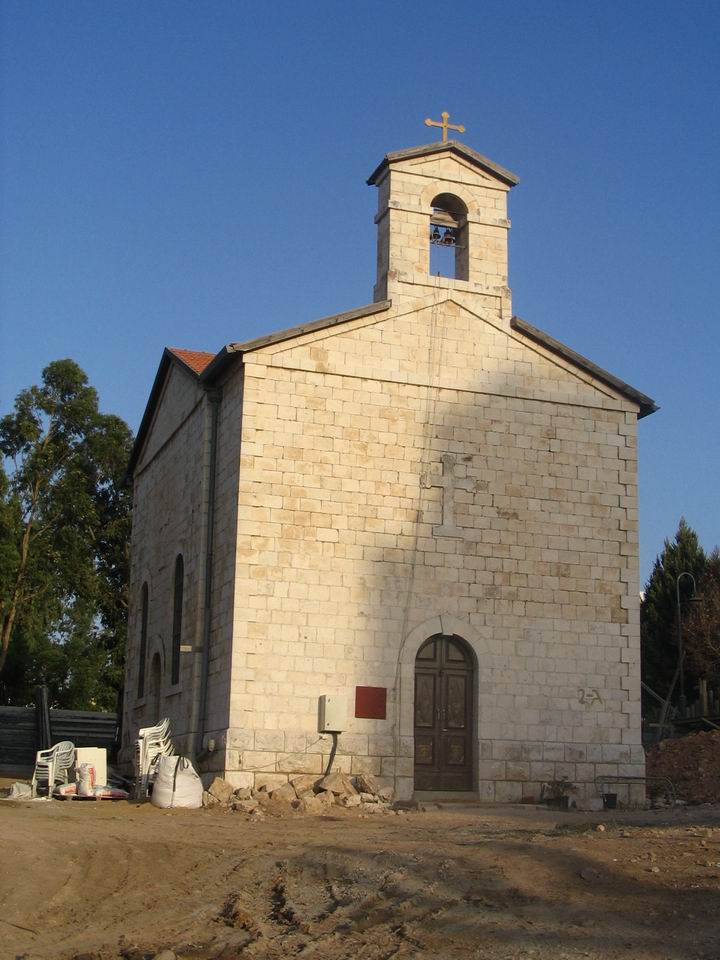 In 2006 a new stone fence was built around the church to protect the site.  The above photo was taken during these works. The church wall was completed in 2007, as can be seen on the right side. 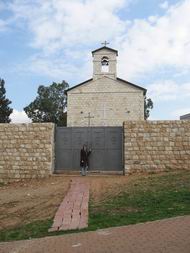 On the south side of the main road is another church – the Franciscan Catholic church of St. Gabriel. 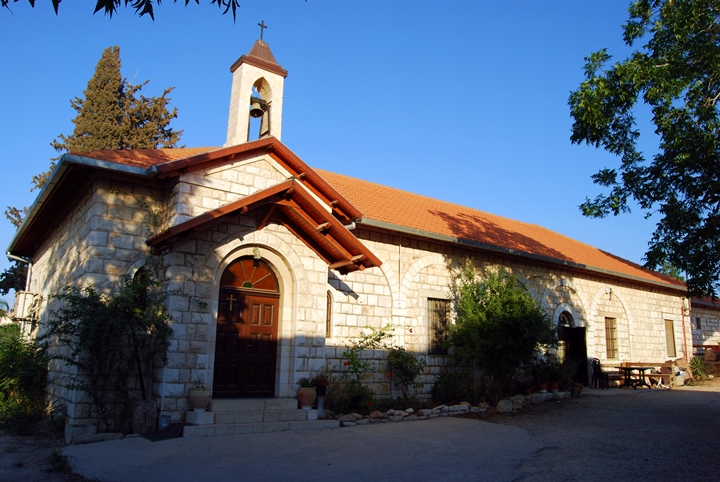 In the hill side, north to the church, there are traces of ruins, rock  quarries, bell-shaped cisterns, rock-cut burial caves and agriculture terraces.

Three types of Quarries were identified in the salvage excavation report (see references): 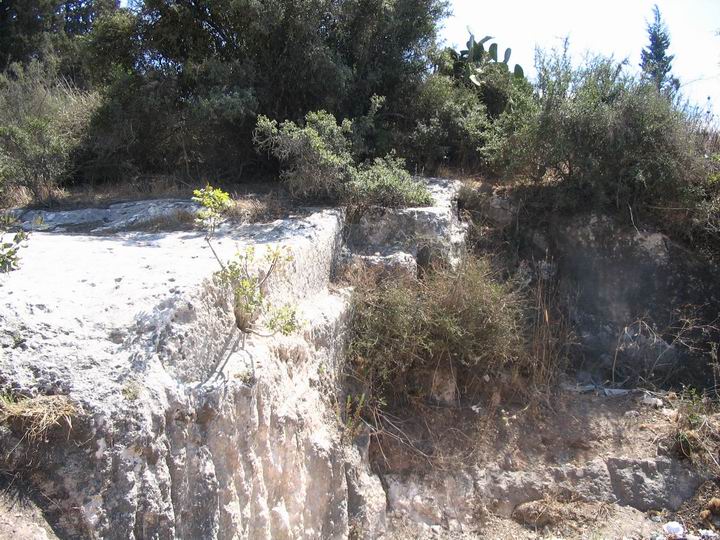 A view of the rock-cutting industry: to cut the stones within the rock, straight lines were first carved into the rock using Iron, then cut deep into the rock. This process was not completed in this case. 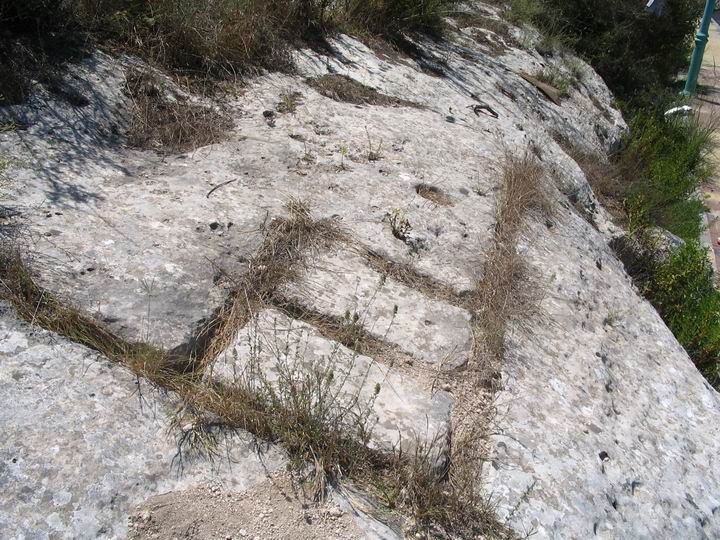 In the rock there are many rock-cut tombs, partially identified as late Roman. In addition there are tombs arranged inside burial caves.  Some of the burial caves were reused as stone quarries. 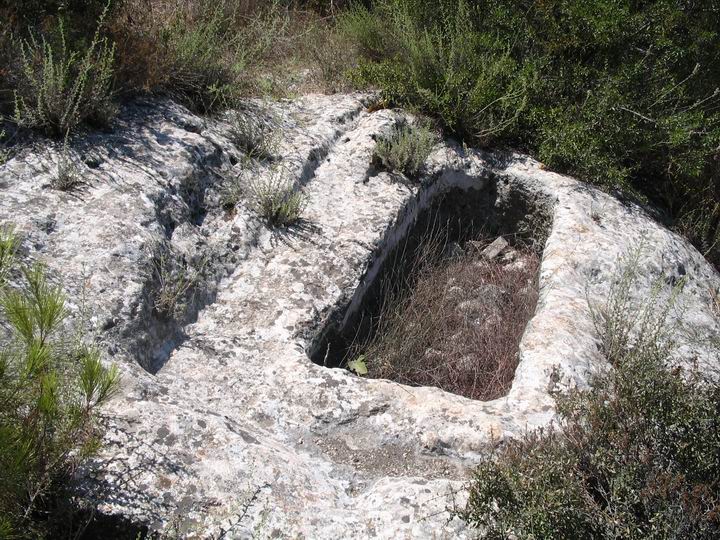 The agriculture industry relied on wine presses, and 8 bronze-age presses were found cut into the rock. All the presses were based on a similar simple design. In the photo below the top side of the wine press was steep rectangular floor where the grapes were arranged. The workers squashed the grapes with their feet, and left for fermentation. Then, the juice would flow down to the lower side, through a blocking/filter hole into a collecting basin.

On both sides of this pit there were 2 holes (as can be easily seen on the right side), where poles were laid into the hole, and held by the workers during the pressing over the grapes.  In one press there were 8 holes on the sides, used to hold poles for providing shadow for the comfort of the workers. 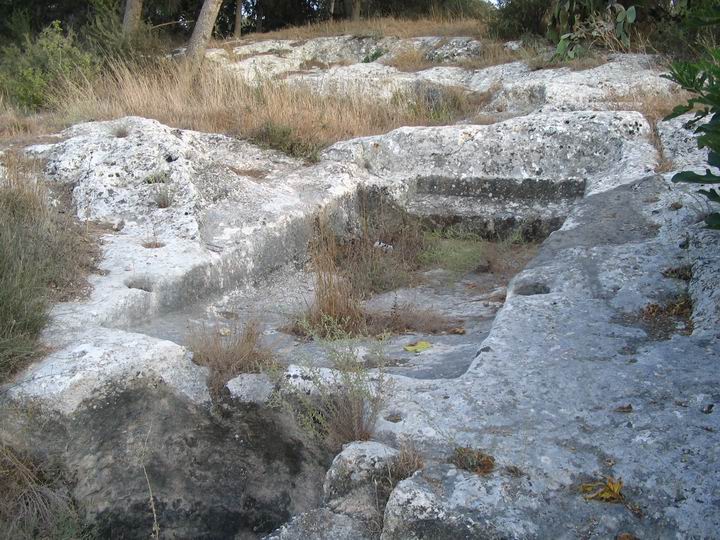 The same press can be seen from the bottom view. Between the pressing floor and the collecting basin – a set of 1-2 holes first blocked the wine juice, then let it flow through. As a filter, the holes were filled with a collection of thorns or brushes. 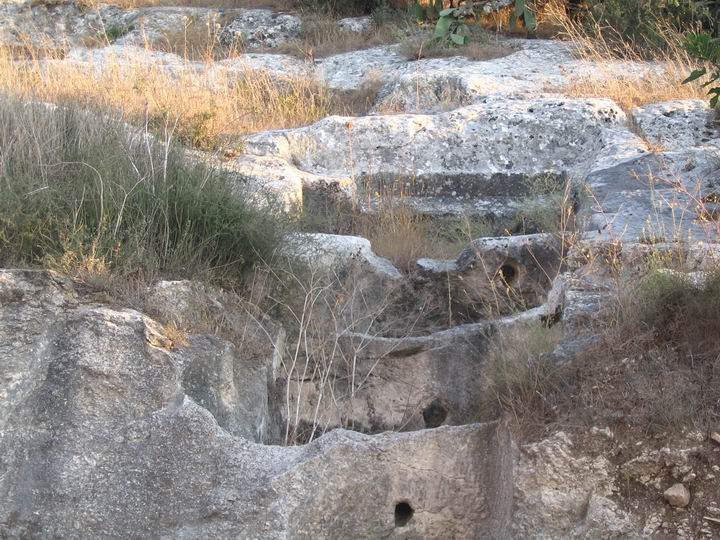 Another view of the wine press is seen in the photo below, as captured from the new road below (Ha-Negev Street).

Note that the site is close to the new neighborhood. 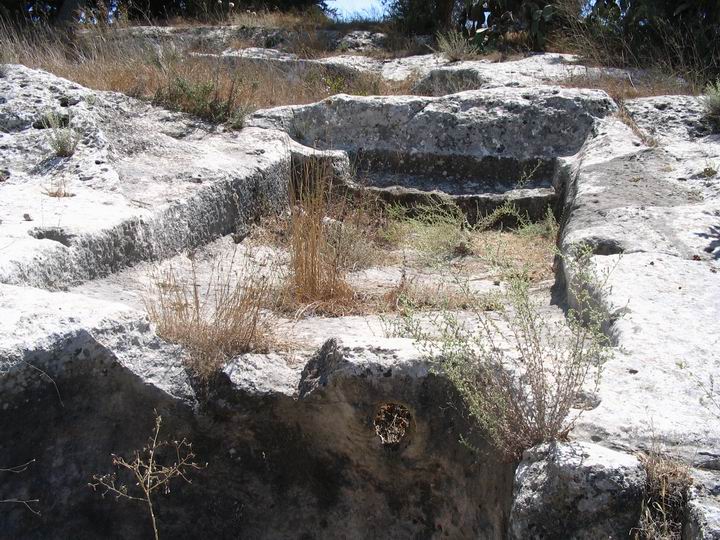 In 2006 we wrote: “We hope the City of Migdal Haemek will arrange this site as an archaeological park, since it will be relatively easy to arrange a staircase and paths through the sets of these ancient installations, which are concentrated in a small area . We will try to get the municipality interested in this project and hope to raise funds and donations in order to push this project”.

A year later a unique archaeological park was opened here, with the assistance of the students from the schools of the city.

The area around Migdal Haemek is covered with pine tree forests, which were planted in the past 50 years by KKL. In the early spring time, between the trees, are carpets of wild flowers –  the cyclamen (Rakefet), which is seen in the photo below. These flowers are one of the few plants that grow well under the layer of the pine tree leaves or between the rocks. 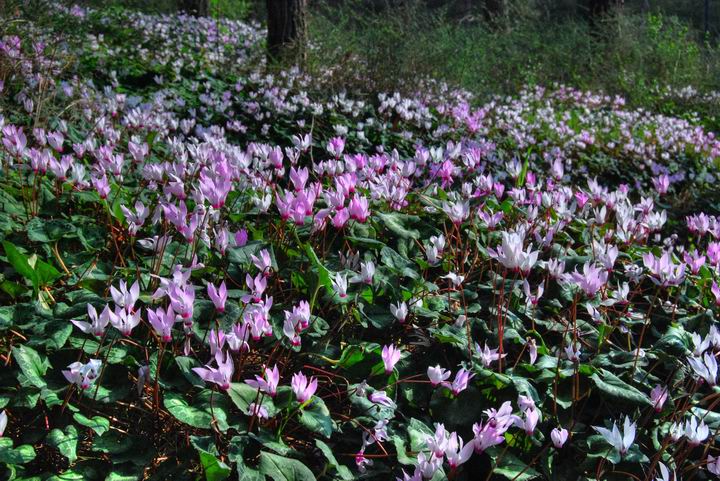 A closer detail of these gentle flowers is seen below. 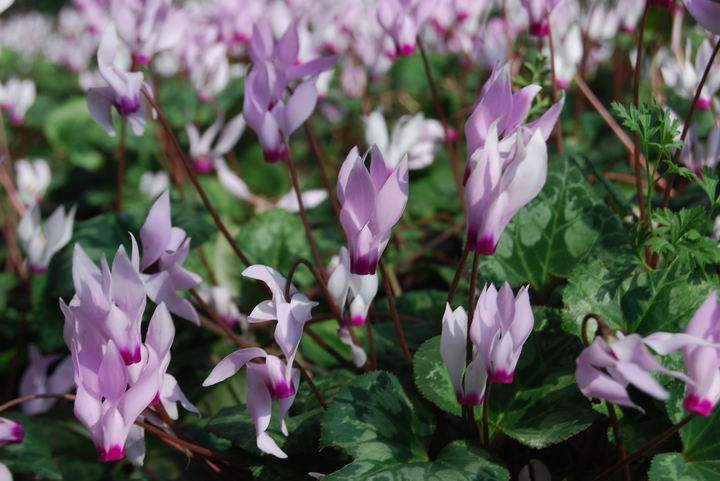 The photo is part of a collection of  aerial images of BibleWalks’s partner.

The photo shows the view of Migdal Haemek from the north-west side, with the Industrial zone on the bottom and the center of the city in the center-right side. The ruins that are featured above are located in the green patch area in the center of the photo. This is also the location of the ancient road on the way to Nazareth and Yafia, in the direction from right (west) to left (east). In the background is the Jezreel valley. 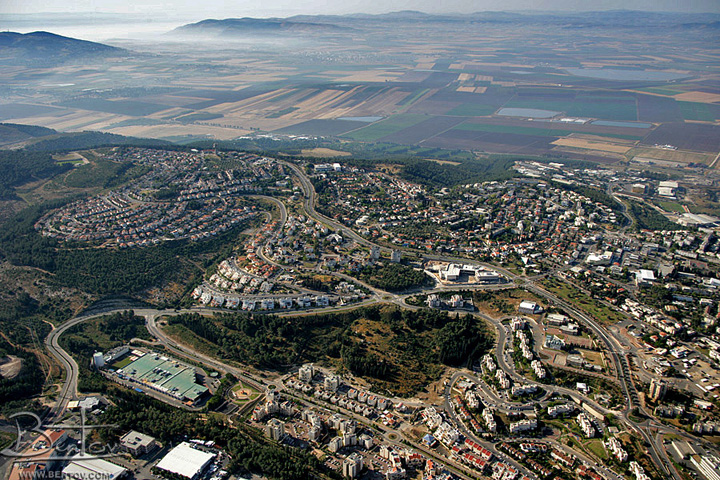 Note that  the prefix name, Migdal, should not be confused with Migdal of sea of Galilee (Magdala).

On the old road to Nazareth there are the remains of two ancient villages east of Shimron:

This page was last updated on Apr 29, 2017 (wine fermentation process)