Ruins of a Canaanite and Israelite major city located on a hill near Samiya spring on the foothills of Mt. Baal-Hazor.

On the east side of the rich Samiya spring, above a fortified hill,  are remains of an ancient city.   Its Arabic name – Marjameh – means “ruin of the heaps of stones”, which indeed describe the look of the remains.

According to the surveys and brief excavations, this was a major Israelite city, which was first a Canaanite city, then fortified at the end of the 10th century BC, lasting until the Assyrian conquest. Scholars suggest several identifications to this primary Biblical city.

A map of the area is shown here, indicating the major points of interest. It is located on a height of 466m above sea level, at the north eastern foothills of the high mountain of Baal-Hazor (1016m altitude).

The site is accessed by a paved road that leads to the Samiya spring, where a modern pump station is located. The ruins are located above the spring.  Other ruins of a Roman/Byzantine village are located south of the spring, along the access road. 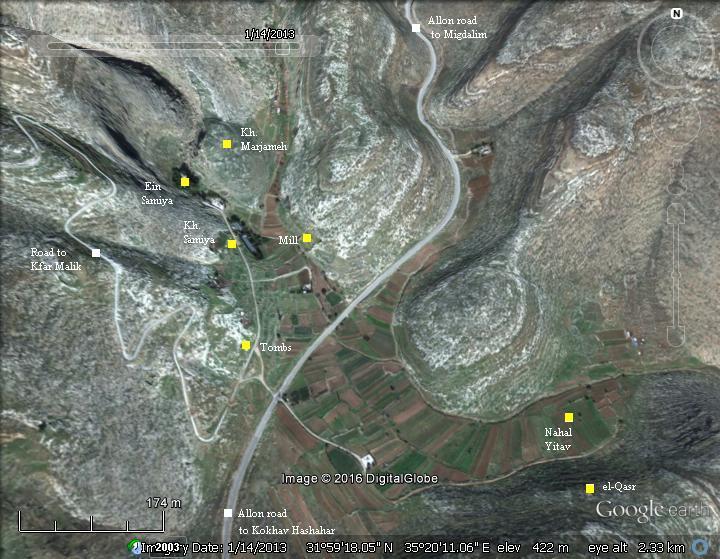 The site was first settled during the Canaanite period, on the southern foothill, close to the spring of Samiya.   This strong spring, a rare source of water in this dry desert area, was a sort of a small oasis. It fed the small fertile valley below it, supporting the villagers with fresh fruit and vegetables.

The major periods were Early Bronze II and III, Middle Bronze I and II, and the Late Bronze period. The findings included structures and possible fortifications of these periods.

A large Necropolis, dated to this period, was discovered on the hillside, 500m south of the site. The majority of the tombs were built in shafts, mostly from the Middle Bronze I period (2200-2000 BC). Other tombs are located in 6 burial cluster areas in the vicinity of the site, totaling more than 300 tombs.

During this period the region of the high mountain area witnessed a new wave of settlement, following the conquest of the Land by the Israelites. Dozens of villages were established. According to many scholars, the core of the Israelites settled in the area of Manasseh  and Ephraim, and only later expanded  to the south (Benjamin and Judea). Therefore, the capital city was selected to be in Ephraim, and only at the end of this period it moved to Jerusalem.  Shiloh, located in the region of Ephraim, became the religious capital of Israel: it was the assembly place for the people of Israel, a center of worship, and housed the Ark of Covenant.

The Israelite settlement on the hill of Marjameh, north east of the spring,  started in this period.

A Biblical map is below, with a red marker indicating the location of the town,  at the foothills of Mt. Baal-Hazor and 9km south east of Shiloh. Map of the area around the site (red dot) – during the Canaanite and Israelite periods  (based on Bible Mapper 3.0)

After the unified Kingdom split (928 BC), the city became part of the Northern Kingdom. According to the archaeological survey, the major period of settlement on the hill north east of the spring of Samiya was in the Israelite period II. The findings on the hill included a city wall that surrounded the entire city, a tower and fortress on its north western side, houses and streets. The city was heavily fortified, either before the split of the Kingdom or just after it.

An illustration of the Iron Age city is shown here, as viewed from the south side. The Samiya spring is located in the valley below the city, flowing to the south. 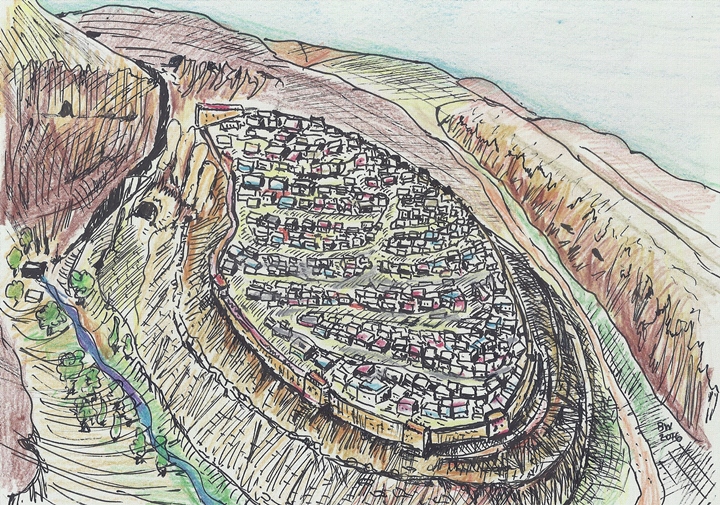 In 732 BC was an  intrusion to the North of Israel by the Assyrian King Tiglath-Pileser III, who annexed the area (as per 2 Kings 15: 29): “In the days of Pekah king of Israel came Tiglathpileser king of Assyria, and took … Galilee…and carried them captive to Assyria”. This intrusion affected the north of the Kingdom, but the area of Samaria was spared since the Assyrians stopped at Megiddo then continued along the shore to Egypt. 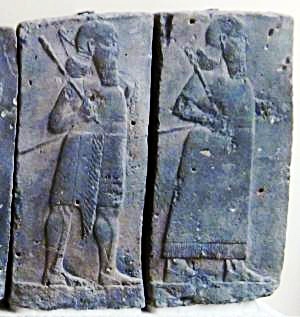 Following the death of Tiglath-Pileser, the Egyptians encouraged the people in the occupied  territories of the Assyrians to revolt. Hoshea, King of Northern Israel, joined this mutiny, but made a fatal mistake. This time the Assyrians crushed the remaining territories of the Northern Kingdom. The intrusions of Shalmaneser V and Sargon II in 724-712  ended the Northern Kingdom (2 Kings 17: 5-6): “Then the king of Assyria came up throughout all the land, and went up to Samaria, and besieged it three years. In the ninth year of Hoshea the king of Assyria took Samaria, and carried Israel away into Assyria, and placed them in Halah and in Habor by the river of Gozan, and in the cities of the Medes”.

The villages in Samaria were  destroyed, including this city. It was never built again on its old location.

Ruins of the Roman/Byzantine village, named Kh. Samiya, are described in another page.

The site of Kh. Marjameh, on the hill north east of the spring, was partially excavated by Amichai Mazar (1975, 1978) and Matanyahu Zohar (1979-1980). Future excavations should follow, as this is one of the most interesting site in the Holy Land.

The city was one of the largest in the mountain area of Ephraim during the Israelite period. It must have been an important place… but what was its name? Scholars suggested various identification proposals to the site of Kh. Marjameh:

A drone captured this view from the south side. The spring is located under the trees, while the ruins of the ancient city are on the hill to the right (north east) of the spring. 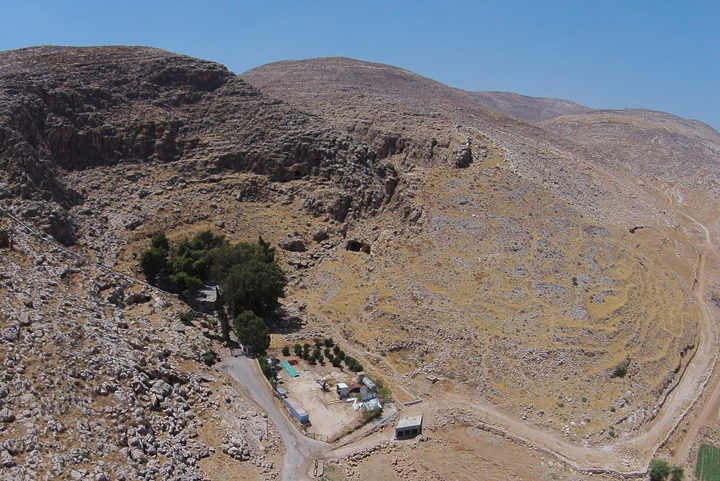 The ruins are better visible in the following view – from the south east side. The hill is surrounded by two valleys – the deep Samiya gorge on the left (west) side, and the wider valley of Wadi el-Saiya on the right (east) side.

On the hill are heaps of stones, which gave the site its Arabic name – Marjameh. According to the archaeologists, the heaps are remains of massive structures of the Iron Age. There remains of the houses are arranged in terraces along the slope of the hill. Between the ruins of the structures are winding streets that go up the hill. 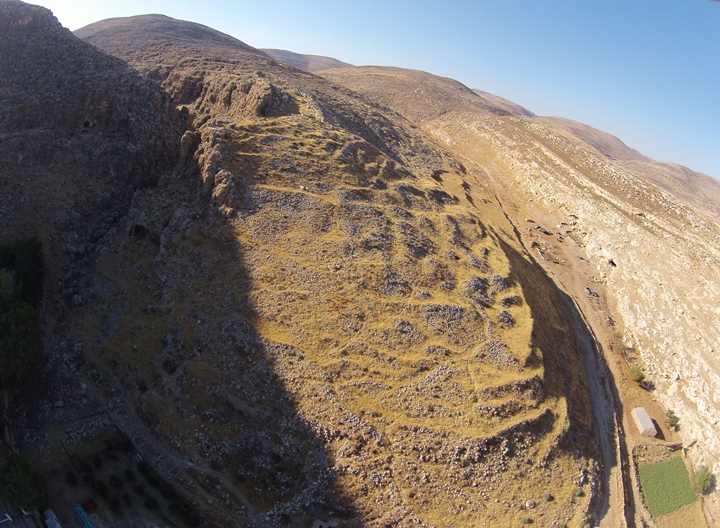 Another drone view  is from above the eastern side.  The ancient city is situated on a steep hill, with steep slopes on all sides. Its area covers almost 100 dunams (10 acres), which is quite large for an Iron age walled city. For comparison, the area of the City of David in Jerusalem is about 120 dunams (12 acres). There are other common features, like a strong spring near the city foothill (the Gihon), the location of the city near a higher mountain (Moriah), and probably also the existence of a high place on top of the hill. 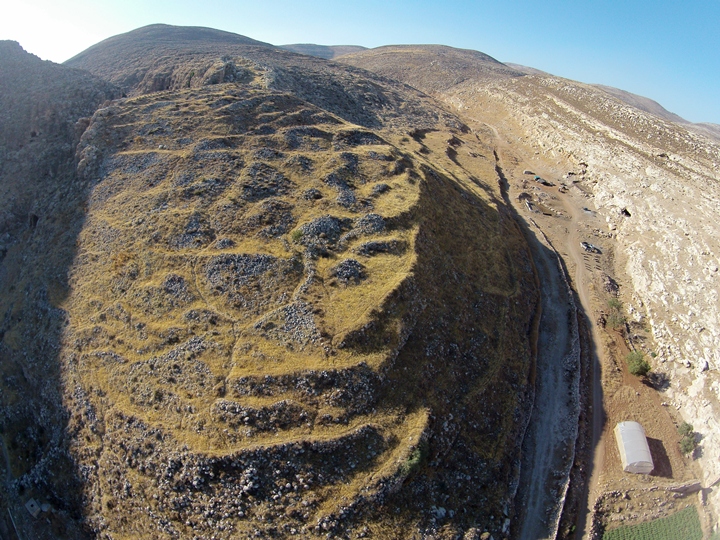 The next photo shows the eastern side, and valley of Wadi el-Saiya on its east side. The gate to the city was from the north eastern side (thanks to D. Raviv for the clarification). 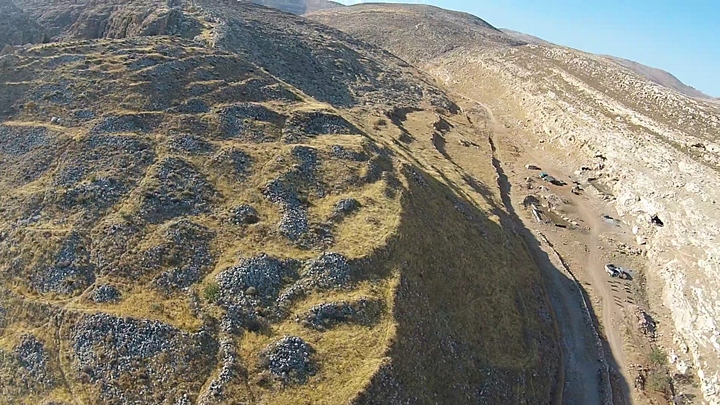 A closer view of the south east corner of the ruins: 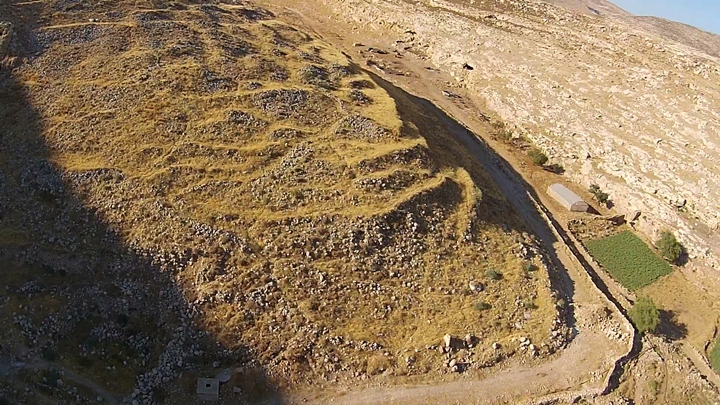 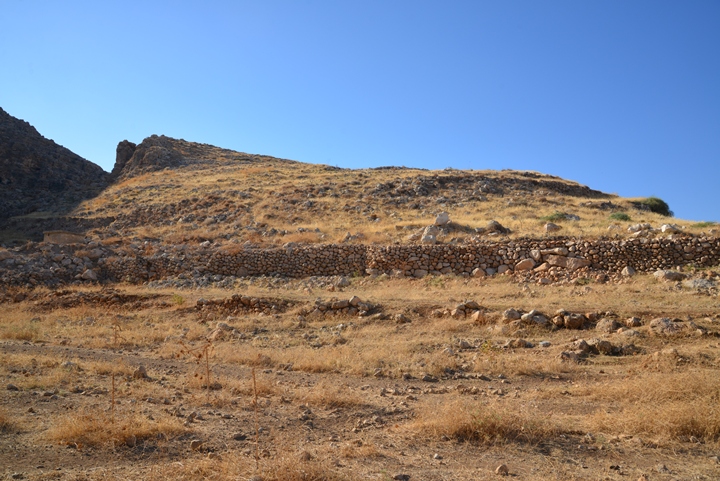 The city wall, 4m wide, surrounded the entire area of 100 dunams.  Above it are heaps of stones – remains of the Israelite period structures. 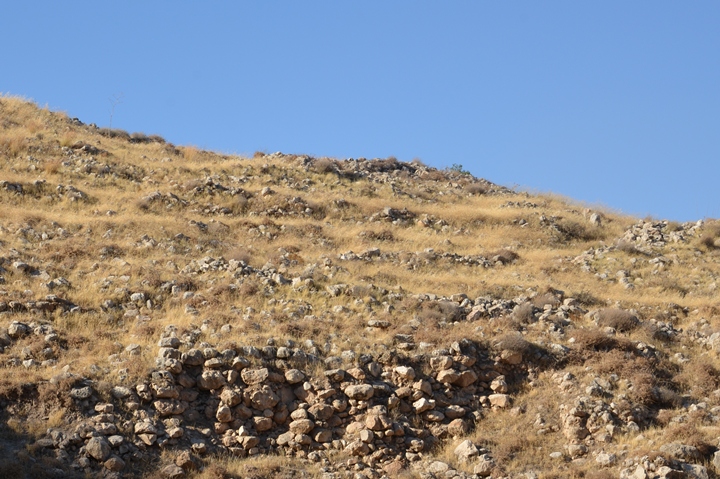 The location of the spring is indicated on the illustration as a red square. The Samiya spring is the reason why the site was settled through thousands of years. The dry desert area cannot support more than few shepherds, while the Canaanite/Israelite city, and later the Roman/Byzantine town, required a steady source of running water.

A ground view of the spring, as viewed from the paved road, is shown below. Samiya (Arabic for “high”) is the largest spring in the eastern central region of Samaria, and today it supplies waters via a pipeline to the large city of Ramallah and the el-Bireh district. 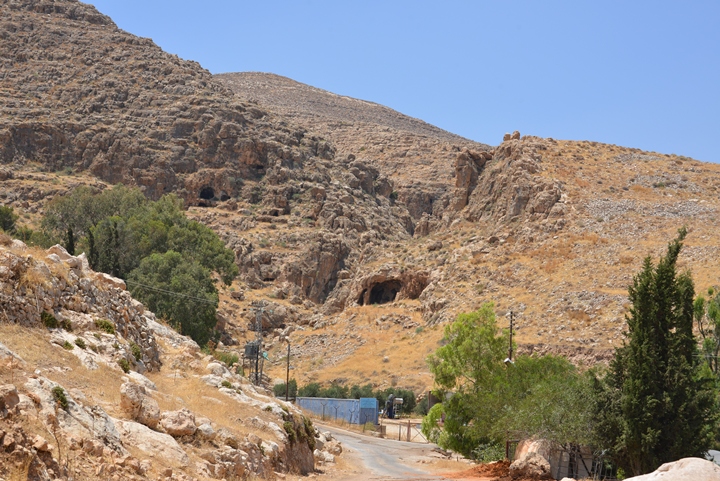 A closer view of the spring area is in the following photo, where the large trees are seen on the left side. The spring is located at the bottom of the Samiya valley, on the foothill of Mt. Baal Hazor.  It flows out of a deep, narrow gorge surrounded by high cliffs.

The 19th century report by Guerin (‘Samaria,’ ii. 211) described the spring and the Roman ruins around it: “The ruin is close to the ‘Ain el Samieh. This spring flows under a chamber with circular vaulting and built of large blocks: near it lie several fragments of columns in stone and capitals imitating the Doric style”. He also noted the Israelite period ruins above the spring: “To the north and above the spring I remarked the ruins of a considerable building, intended perhaps to protect it, and constructed of gigantic blocks rudely hewn. On the lower slopes of the mountain a great many grottoes have been cut in the rock.”. 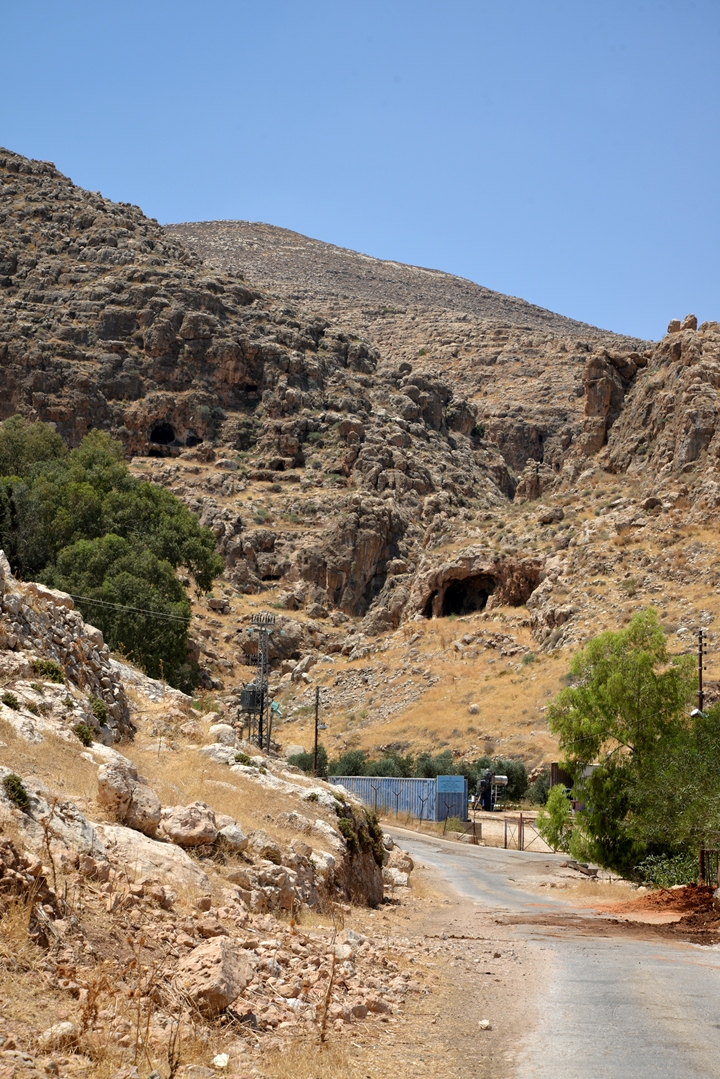 Near the spring is a vertical cliff, rising almost 30m above the gorge, which loops around it on the western (left) side. This topographic layout gave this side of the city a natural protection. 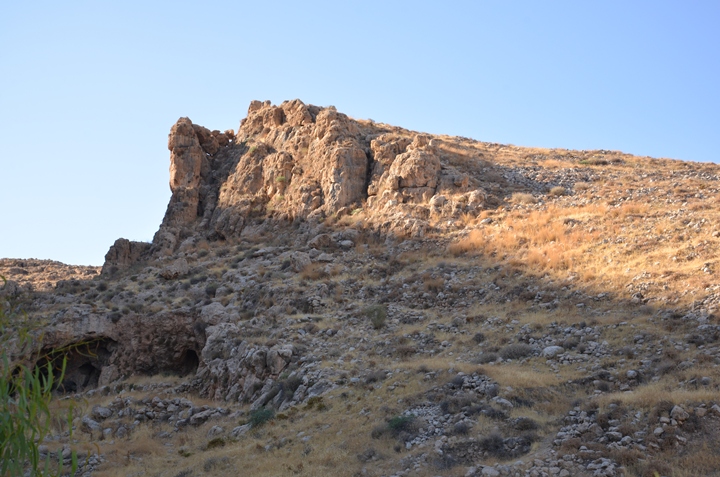 A closer view of the cliff: 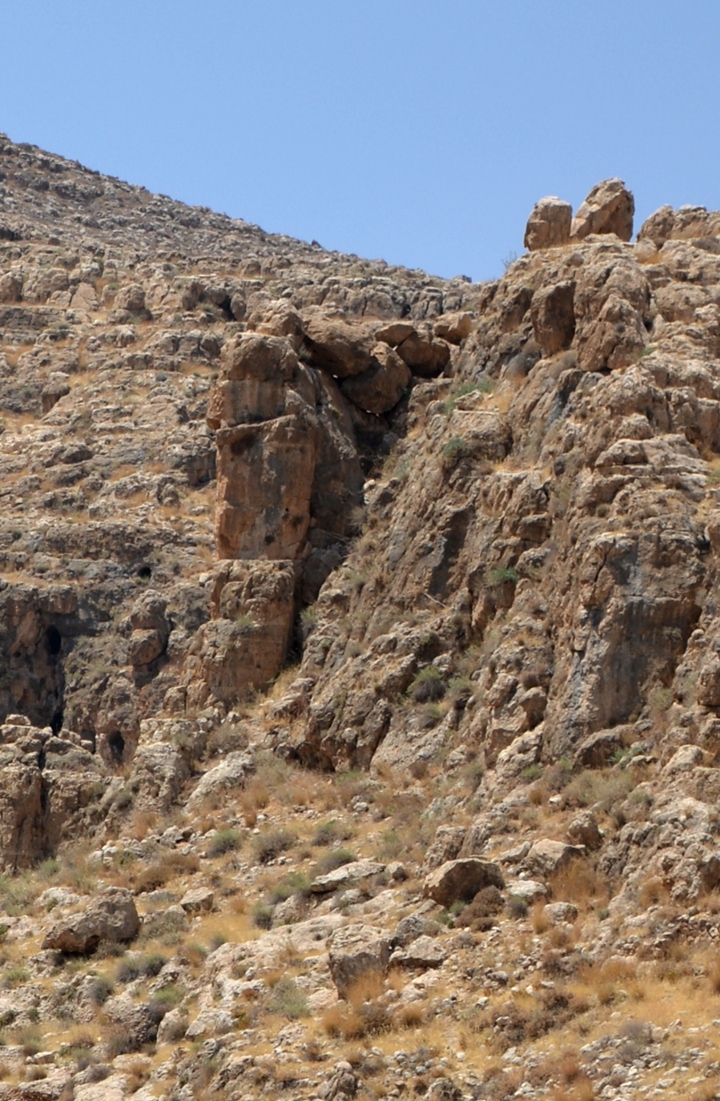 The weakest point in the city was the north western side, where the hill joined the ridge.  It is indicated on the illustration as a red square. 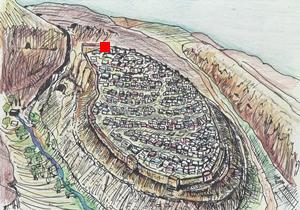 Therefore, the defenders built a large rectangular structure, 14.4 x 30m, with a semicircular shaped face on its north side. The structure, with its high walls and a natural moat protected the weak flank on the north side. This military structure, a massive bastion, is one of the largest Israelite structures discovered so far. 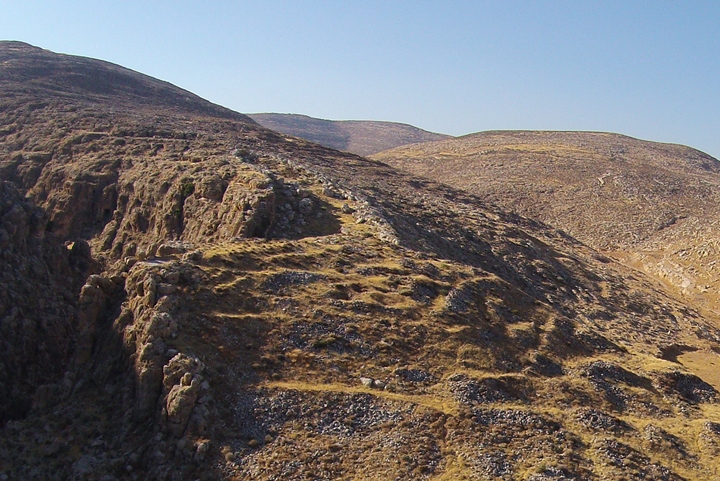 On the south side of Marjameh are ruins of  a later period (Roman/Byzantine) village.  A unique Middle Bronze cemetery is located on its south side. 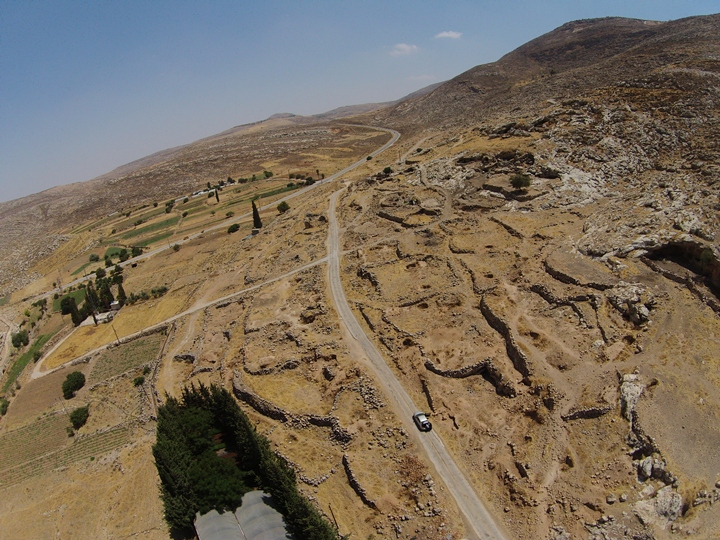