This page summarizes the sites that are reviewed in the region of Lower (south) Galilee.

The site is one of the most likely candidates for the site of Jesus’s first miracle, turning water to wine. Although the traditional place is in the modern village of Kefar Kenna, closer (6KM) to Nazareth, there are other scholars that favour this featured site.

John 2: “… there was a marriage in Cana of Galilee:

and the mother of Jesus was there…”

Yodfat is the famous site of the Roman siege on Josephus Flavius and his Jewish army in 67AD. 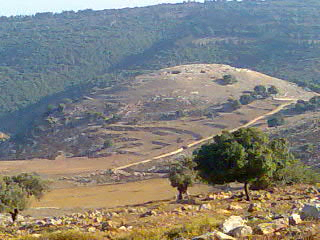 Josephus Flavius: “Now Jotapata is almost all of it built on a precipice…”

Beer Sheba (of the Galilee)

The ruins of a site that was fortified in the Jewish revolt.

Josephus Flavius: “… he built walls in proper places about … Bersabee…”.

The site is located on the eastern side of Netufa (Netopha) valley, located on the ancient road to the sea of Galilee. It is named after the pillars that are standing in the site, and are part of a 2nd century AD Synagogue.

Tell (mound) Mea’mer is a Biblical city on the eastern side of Mount Carmel. It is identified with “Geva Shemen”.

which is called the City of Horsemen”

Tell (mound) Hannathon was an important Biblical city in the heart of the lower Galilee, on the junction of ancient crossroads. It was relocated to a village called Shikhin (Asochis) in the Hellenistic period.

Joshua 19: 14:  “And the border turned about it on the north to Hannathon;

and the goings out thereof were at the valley of Iphtahel;”

A small Biblical site which is located in the valley of a creek that flows into the Zippori creek. The site was one of Zebulun tribe cities, and located at an ancient and modern junction of crossroads.

The great  Roman and Byzantine city of Lower Galilee. A capital and wealthy city near Nazareth and a  major Jewish center during the Byzantine period.

This page reviews the magnificent Mosaics found in the Roman and Byzantine city of Lower Galilee.

This page summarizes the sites that are reviewed in the region of Beit-Kerem and the municipal area of Karmi’el.

This page summarizes the sites that are reviewed in the region of Hilazon (Chilazon) creek, in the north of the lower Galilee.

Ruins of an ancient fortified Biblical city, situated on a natural hill overlooking the Yavna’el valley. Joshua 19: 33: “And their coast was …  and Adami, Nekeb, and Jabneel…”.

A possible location of Jesus’s first miracle – turning water to wine. The site is located near the traditional place in Kafr Kanna.