Ruins of many flour mills are located along the Tsalmon (Salmon) stream (Wadi er.  Rubudiyeh), near its outlet to the plain of Ginosar. On the hill is a Sheikh tomb of Abu Shushe and ruins of a Bedouin Sheikh of Ghuwayr Abu Shushe.

The stream of Nahal Tsalmon flows into the plain of Ginosar (Genesareth) unto the Sea of Galilee. It’s waters were used in the antiquities to power flour mills.

A map of the lower Nahal Tsalmon stream shows the major points of interest. 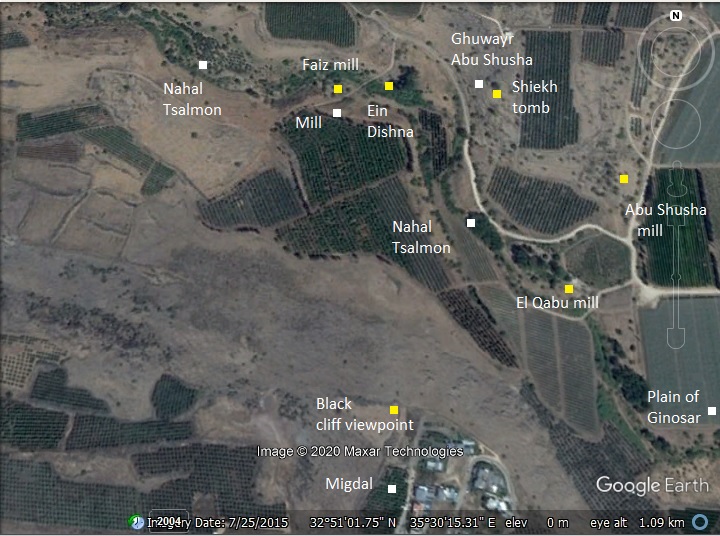 The fertile plain of Ginosar, combined with the abundance of water from the Tsalmon stream, was inhabited since prehistoric times. The caves along the nearby valley of the Amud stream had Early Man remains starting from the Late Paleolithic periods, ~200,000 years ago (e.g., Skull cave – 1km north of the site).

During roadworks in 1956 through the hillside of the Bedouin village Ghuwayr Abu Shushe, the archaeologists unearthed tombs dated to the Bronze period.

In the 1st century AD there was a flourishing town known as Gennesaret. In the New Testament it was known as “Ginosar”. It may have been location on the hill at the outlet of the stream, where ruins of a Bedouin village are located.

Ginosar/Gennesaret is not mentioned in the Old Testament, but was part of the inheritance of the tribe of Naphtali. It was first referred to in the 2nd century Talmud.

Both Ginosar/Gennesaret and Migdal/Magdala are mentioned in the New Testament in many instances of Jesus acts in the area.

Josephus Flavius of the 1st century AD describes the plain as a fertile area (Wars 3, 10:8).

A view of the plain of Ginosar (Gennesaret) was illustrated by the early traveler W. M. Thomson in his book of 1861 (“The Land and the Book” Volume 2). The view is from Tel Kinneret towards the south. 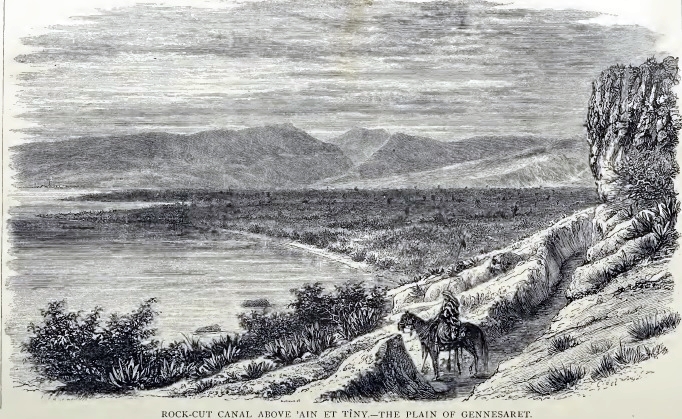 “The stream from Wady er Rubudiyeh is the largest, having nearly three times the volume of ’Ain el Mudauwarah [the round spring], and about twice that of Wady el Hamam [the arbel stream]. It drains a large district to the west, and, on reaching the plain, is carried to the north and south for the purpose of irrigation. Canals from er Rubudiyeh, says Dr. Merrill, of the American Palestine Exploration Society, bring down water to within a few yards of ’Ain el Mudauwarah on the north. Towards the north-west, the winter torrent from Wady el ’Amud comes down from the mountainous region about and west of Safed, and crosses the plain to the lake”.

Conder and Kitchener surveyed this area during the Survey of Western Palestine (SWP), commissioned by the Palestine Exploration Fund (PEF) in 1873. A section of their map is seen here. The Bedouin village of Kh. Abu Shushe is marked in red in its center. Notice the mills that are marked along the Tsalmon stream (W. er Rubudiyeh) and the aqueduct that fed the mills. The main town in the area is el Mejdal (Magdala) on the shore, also marked in red. 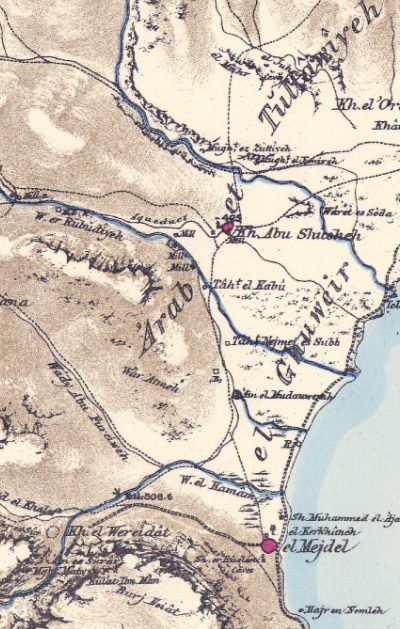 The surveyors wrote in Volume I of the Survey of Western Palestine (Sheet VI pp. 360-1):

“Kh. Abu Shusheh —A few wretched hovels, all built of basalt, round a mill. It contains about 20 Moslems. The plain to the east is only slightly cultivated by the inhabitants. There are several
ruined mills near”.

The museum of Igal Allon, located on the southern side of the Kibbutz, hosts the ‘Jesus boat’.   The boat is a 1st century AD fishing boat which was found on the shore of the sea of Galilee, which may be from Jesus times, or the Jewish revolt.

The valley of the Nahal Tsalmon stream is open to the public.

(a) View from Migdal

A great view of the plain of Ginosar and the outlet of Nahal Tsalmon is seen from the village of Migdal – the modern village near the ruins of Magdala. 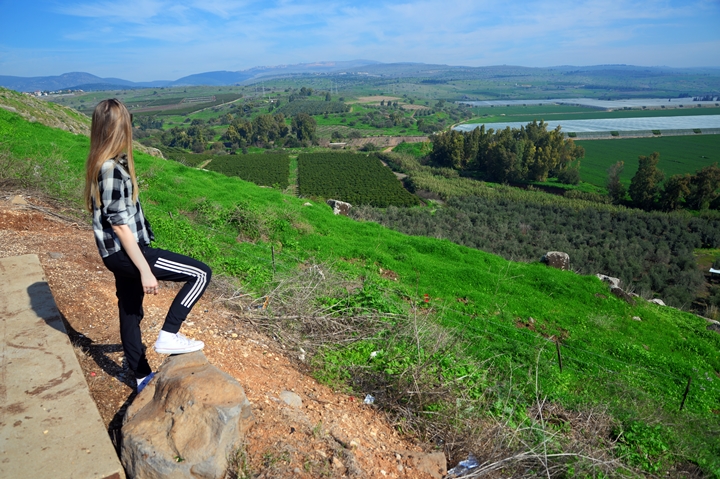 The panoramic views are best seen from the Block Cliff on the north west edge of the village, accessible by a road from the old watch tower. 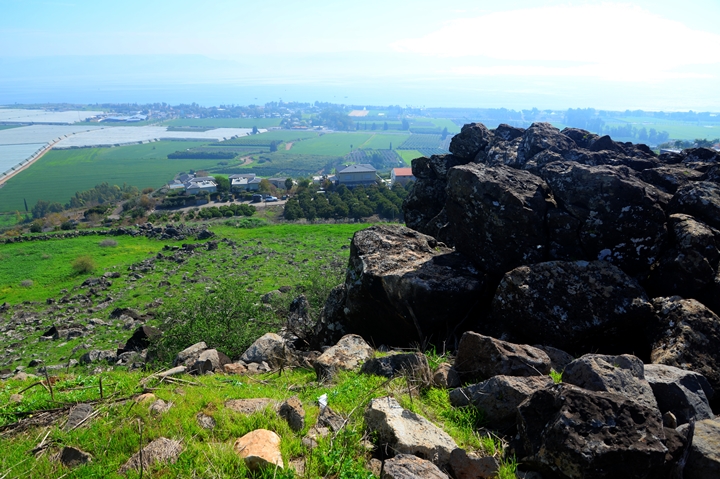 The Tsalmon stream starts from the Upper Galilee mountains. Its total length is 30km, starting from the Acre-Zefat road (hwy #85) near Rama and Mt. Hazon. Initially it reached the Mediterranean Sea, and after the creation of the Syrian-African Depression it changed course to flow into the Sea of Galilee. 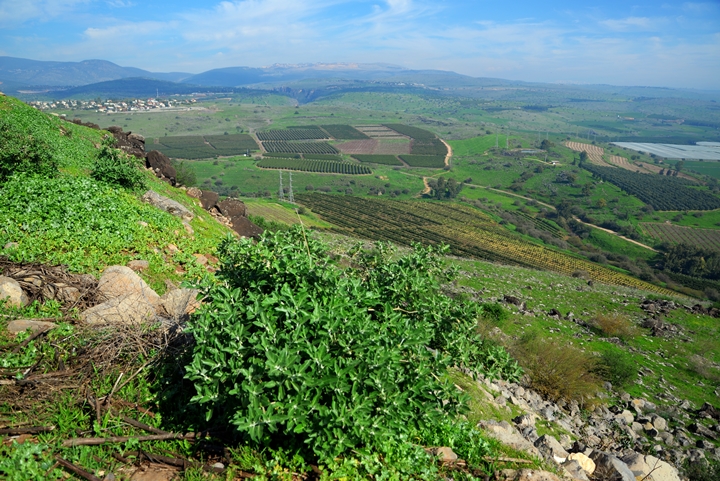 At the end of the winter the area is covered by a green carpet, dotted by wild flowers. In a month or two the green views will be replaced by the brown soil and dry plants. 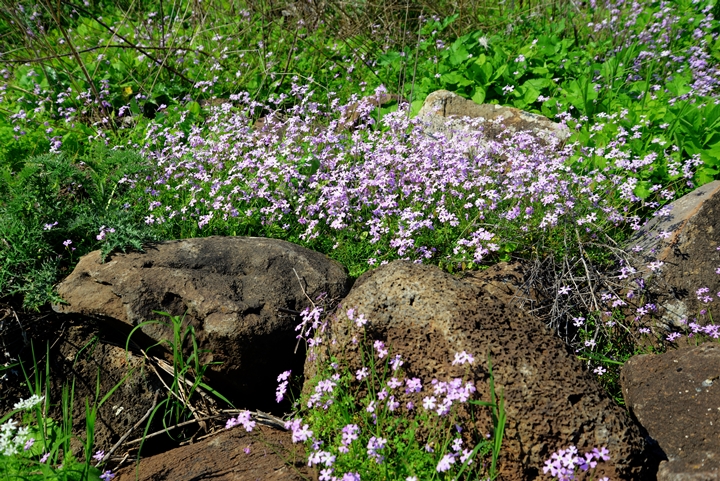 These pink flowers are called “Ricotia  Brassicaceae”. Their Hebrew name is “pretty Carmelite” (“Carmelite Na-ah”). They are named as such since the delicate flowers, which grow among the rocks in most of the Galilee, are cross-shaped and resemble Carmelite crosses.

Descending to the valley below, the houses of Migdal and the hill of the black cliff, are seen towering over the fields of the plain of Ginosar. 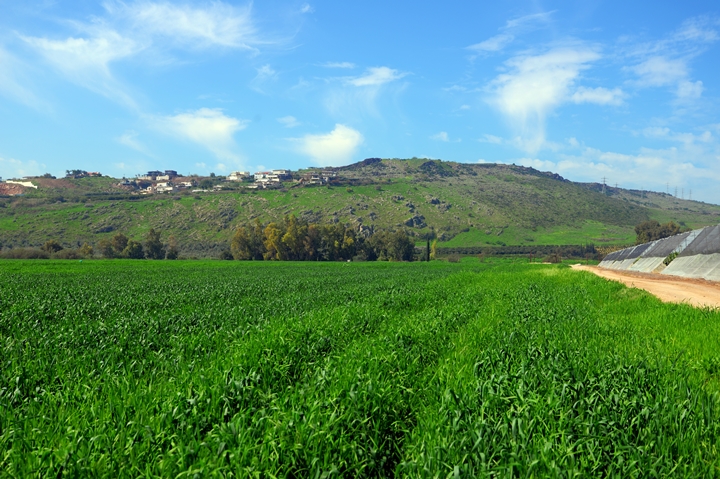 At the outlet of Nahal Tsalmon are ruins of flour mills. The mills were used to grind the grains extracted from the wheat that was grown in the plain of Ginosar. These mills were operated by the power of the falling flow of water, which was diverted from the stream from an upstream point. The water flowed through channels  and fell down through a chimney on a wooden wheel that turned the grinding stone around –  thus crushing the grains.

The Abu Shushe mill is the last along its path, overlooking the Ginosar plains, 2km from the Sea of Galilee. It was owned by the Bedouin Sheikh of Ghuwayr Abu Shushe – a ruined village above the mill. In its vicinity are ruins of 6 more mills dated to the Ottoman period. 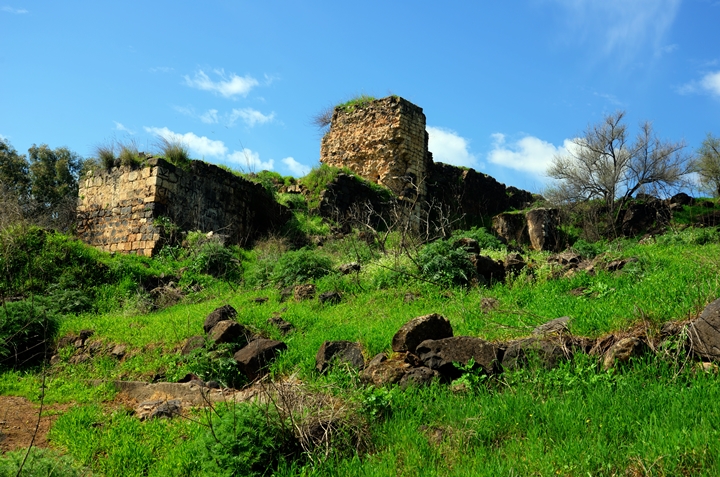 The mill was powered by an aqueduct that conveyed waters from a higher point along the stream. 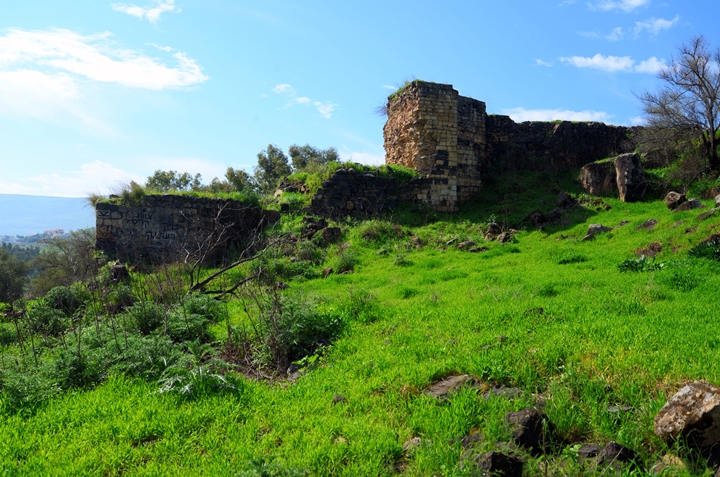 A view of the aqueduct that led the water into the chimney. 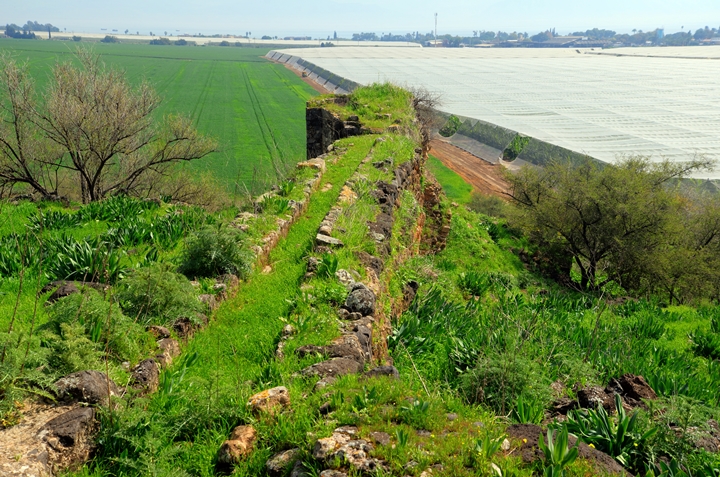 This mill had dual chimneys that were fed from the aqueduct on the upper level, then its waters were used once agin to power 2 more mills on a lower level. 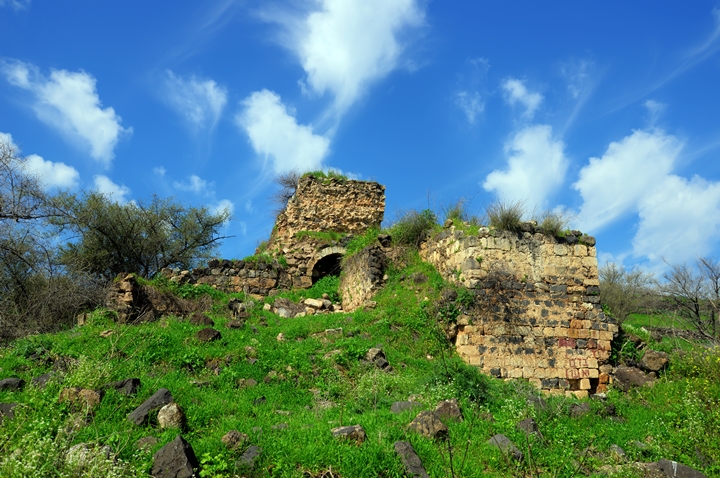 The mill may have also processed sugar canes that were grown in the valley. Evidence of the sugar processing industry during the Crusaders and Mameluke periods was found nearby. A sugar furnace was found in the excavations of Horvat Minya.

A drone view of the ancient flour mill is seen in this YouTube video.

Another ruined mill is located nearby, at a lower level close to the stream. 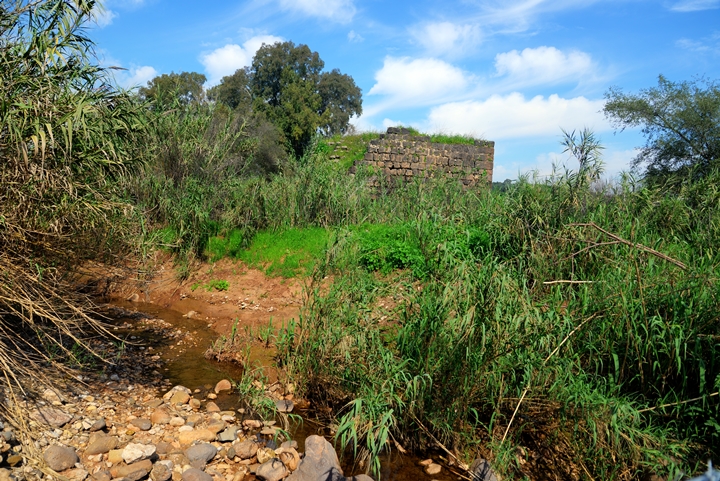 This is the el Qabu (the Dome) mill. 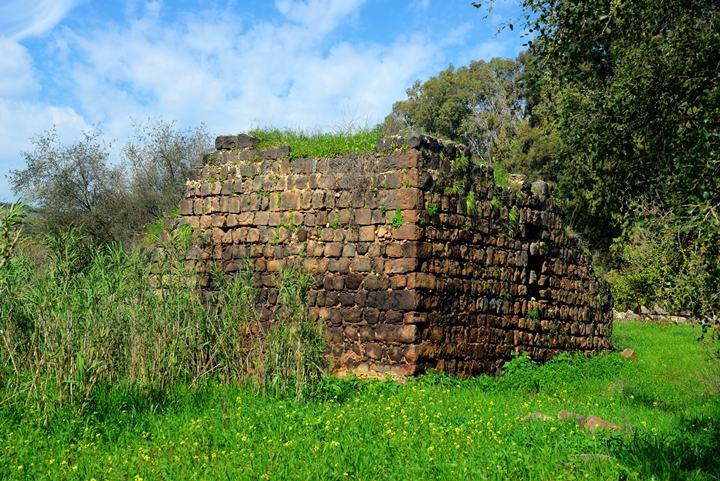 Farther upstream is one of the springs that fed the stream – Ein Dishna (‘Ain el Mudowerah – the round spring). The waters collect in a pond between the trees. 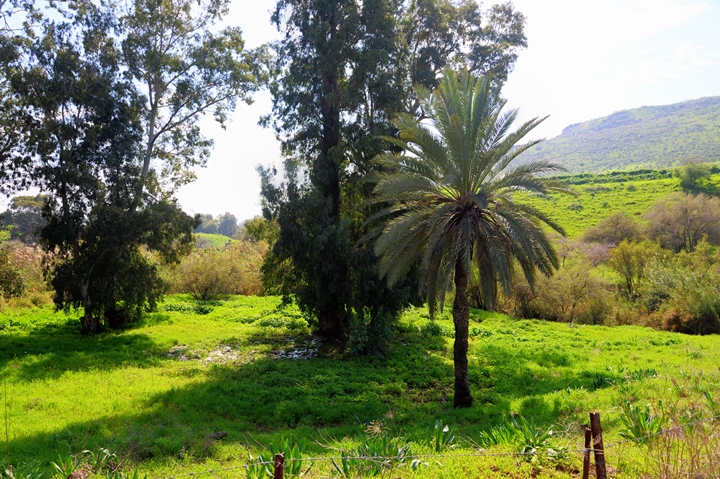 Thomson described the spring in his 1861 book of “The Land and the Book” Volume 1:

Let us now turn southward a little, and examine ‘Ain el Mudowerah, the
famous Round Fountain, which for a long time was supposed to mark the site
of Capernaum. This Gennesaret was and is extremely well watered. … The streams from Rubudiyeh [Tsalmon] spread over the western side, and the Round Fountain waters the portion lying between it and the lake. … Here is the Round Fountain, covered up with bushes and briers. Dr. Robinson correctly describes it as ” enclosed by a low circular wall of mason-work, forming a reservoir nearly a hundred feet in diameter. The water is perhaps two feet deep, beautifully limpid and sweet, bubbling up find flowing out rapidly in a large stream to water the plain below.”

Another mill is located near the spring  – Faiz mill. 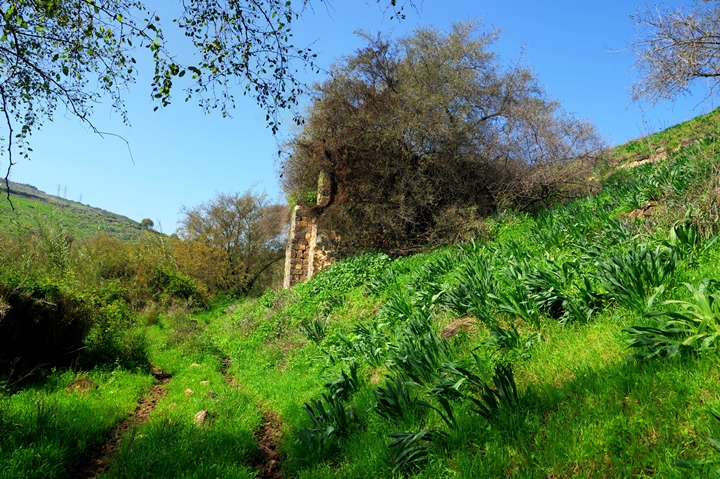 A closer view of the mill: 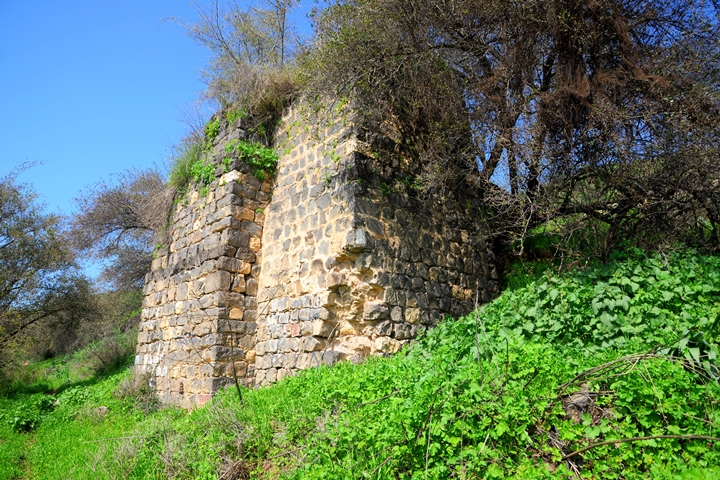 The mill received its waters from the aqueduct seen here on the top of the mill. 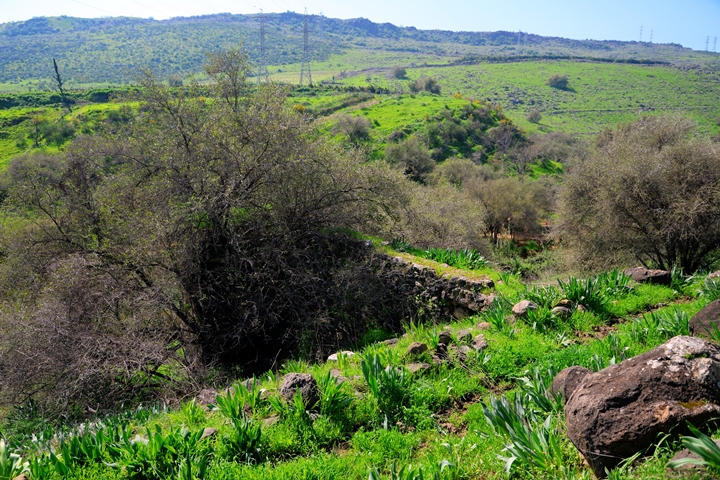 Nearby, across the stream, are ruins of yet another mill. 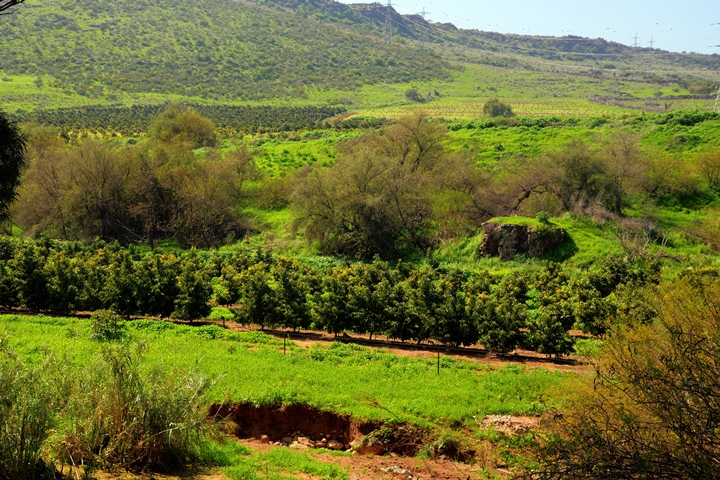 Ruins of a deserted Bedouin village are scattered on the hill above the mills. It was depopulated in 1948. The Arabic name means: Ghuwayr, Ghuweir – Arabic name of Plain of Ginosar; means: ‘The little lowland’. Abu Shushe: meaning ‘father of,’ wearing ‘a top knot.’

A trace of a road is seen here on the foothills, just above the modern road that passes in parallel to Nahal Tsalmon. 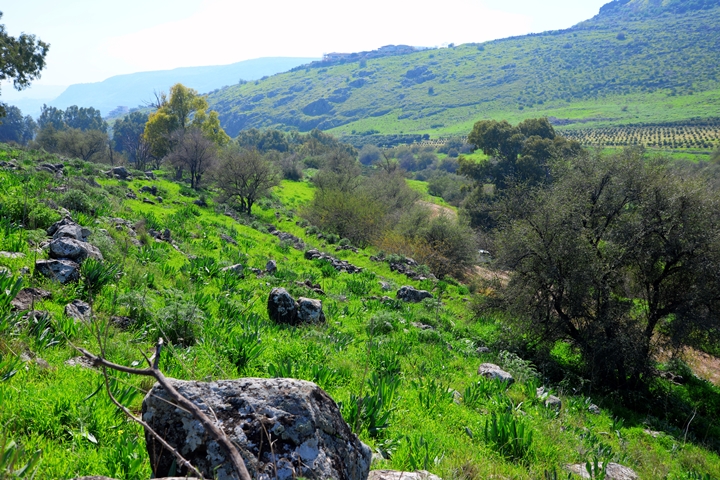 There village was built above an earlier settlement,  as indicated by the ceramics and building blocks that are scattered on the hillside. This was perhaps the second temple period town of Ginosar. 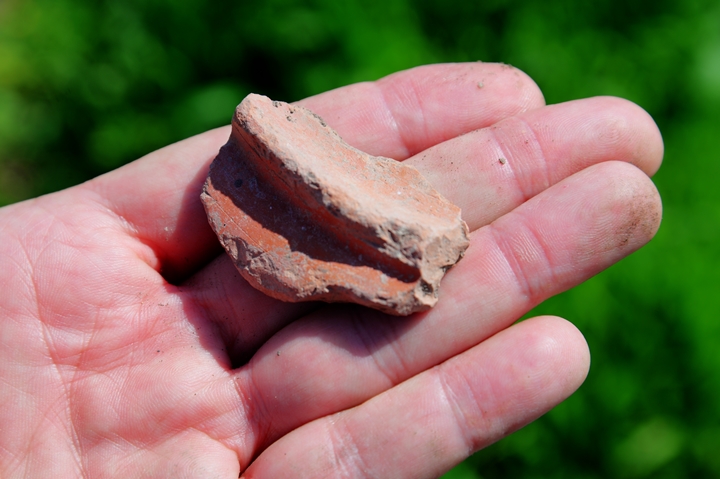 On a higher point of the village is the sheikh tomb of Maqam Abu Shushe. Its stones are basalt black, abd its dome is white. 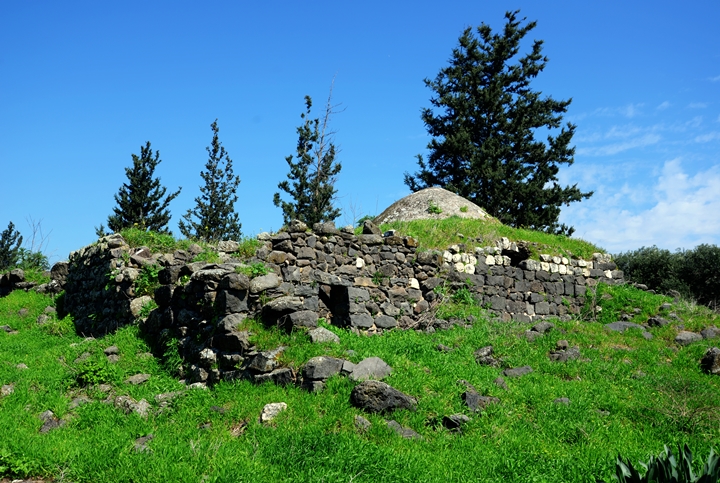 On the western side of the tomb are arches that once supported  a roof. 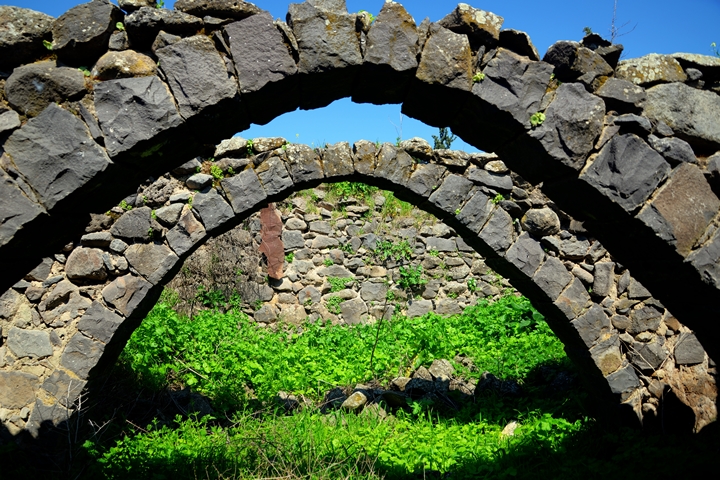 The entrance to the tomb is located on its northern side. 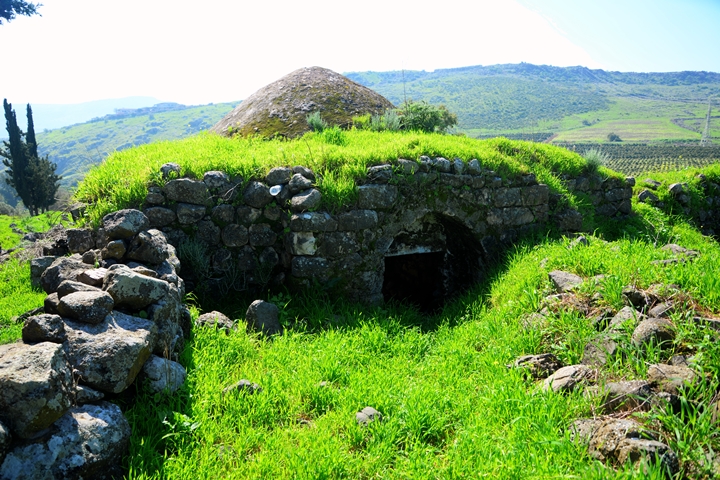 Inside the structure is the tomb, covered by rugs. 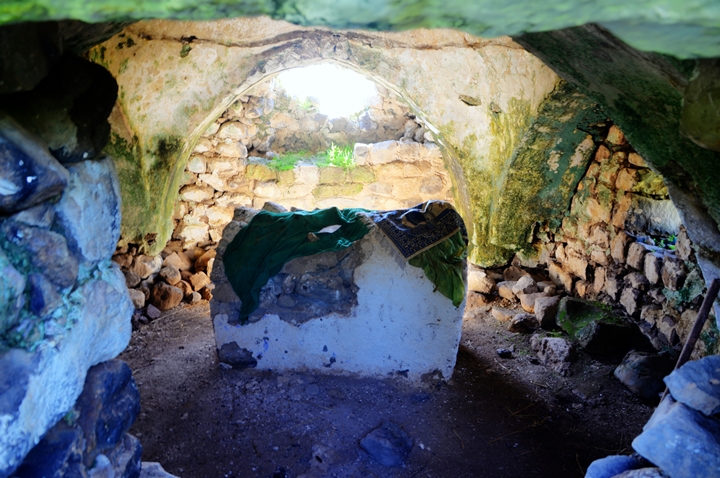 Another view of the tomb: 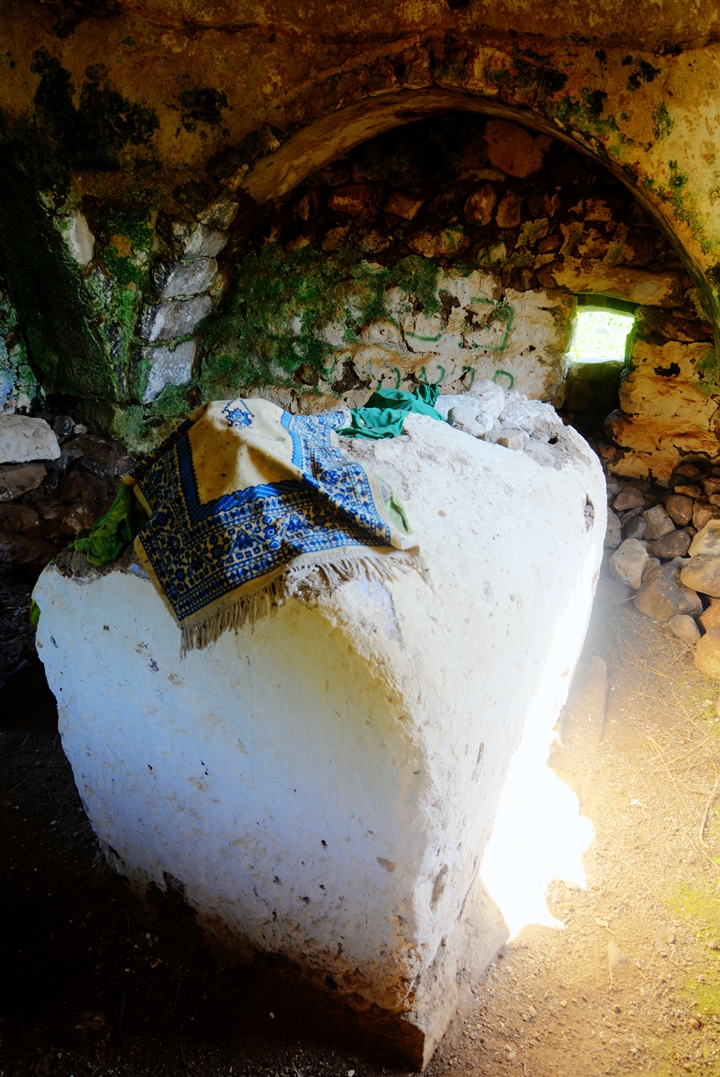 Tsalmon (Salmon) may have been referred in Psalms:

In these texts Jesus lands on the shores of  the “land of Gennesaret”, which is called after Tell Kinneret (the main city at this area)  or the valley south to it (along the shore until Magdala). Here he heals many people.

“And when they had passed over, they came into the land of Gennesaret, and drew to the shore. And when they were come out of the ship, straightway they knew him, And ran through that whole region round about, and began to carry about in beds those that were sick, where they heard he was. And whithersoever he entered, into villages, or cities, or country, they laid the sick in the streets, and besought him that they might touch if it were but the border of his garment: and as many as touched him were made whole”.

“Then they that were in the ship came and worshipped him, saying, Of a truth thou art the Son of God. And when they were gone over, they came into the land of Gennesaret. And when the men of that place had knowledge of him, they sent out into all that country round about, and brought unto him all that were diseased;  And besought him that they might only touch the hem of his garment: and as many as touched were made perfectly whole”.

* Names of the sites: