Ruins located on a small hill on the north-west side of Karmi’el. This was probably one of the Byzantine monasteries in the area.

Khirbet Kabra (Qabra) is located on a small hill on the north-west side of Karmi’el, near Givat-Ram neighborhood.   The ruins were dated from the Roman period until the Mameluke period. Most of its stones were robbed and reused in nearby Arab villages, and so only traces of its foundations, cisterns and tomb caves can be seen on the hill.

Traces of a public building, which may have been a church and a winepress, have been observed in the site. This suggests that it was part of a monastery, since the area around it was a major Christian center of many Byzantine monasteries .

The site is located on a small hill (274M) on the north-west corner of Karmi’el, 50M above the Beit-Hakerem valley. It is close to Katzir street in the neighborhood of Givat Ram. The easiest access to the hill is from this street which is located on its south-west side. 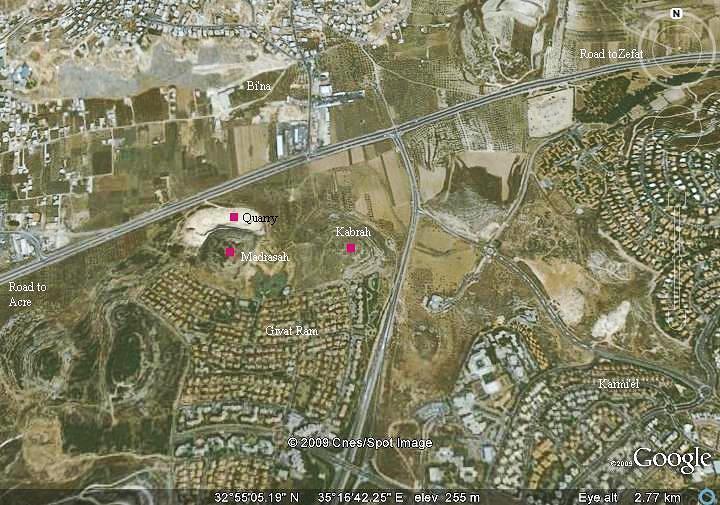 The site was first settled in the Roman period. A tomb on the south side is identified by Habbad as the tomb of Rabbi Eliezer Ha-Kappar and his son Bar-Kapparah, who were famous scholars at the end of the 2nd century AD to the beginning of the 3rd century.

During the Byzantine period the area of western Galilee was mostly populated by Christians. The area within the municipal area of the city of Karmi’el was the densest in this region – a total of nine (!) Byzantine monasteries were excavated here or identified as such.  The site of Khirbet Kabra was one of the Byzantine sites, with a possible monastery on top of the hill.

The Byzantine sites were destroyed in the 7th or 8th century during the Persian or Arabic conquests. According to recent excavations, it was found that this site was resettled during the Arab period, Crusader, Mamlukes and early Ottoman.

The site was mapped during the PEF survey (1881-1883), and appears as Kh. Kabra. A road passes near the site, leading to Hilazon creek on the south side. This was probably one of the ancient routes out or into the Beit-Kerem valley, which was difficult to access since it is completely surrounded by high mountains.

A new neighborhood in Karmiel, named Giv’at Ram (“the high hill”), was constructed on the south side of Khirbet Kabra.

Edna Stern and her team excavated the site in a salvage excavation in 2001. Her final report included: “Numerous building remains, as well as rock-cut tombs, agricultural installations and many water cisterns, attesting to the extensive occupation of the site, were visible on the hill and along its edges”. She concluded: “This excavationthe first at Kh. el-Qabrarevealed a settlement that existed in the Roman, Byzantine, Early Islamic, Crusader, Mameluke and Early Ottoman periods”.

The photo below shows a view of the site from the hills on the north.  Behind the round hill is Givat Ram, a suburb of Karmi’el.  In the right background is a hill (alt 362) called Carmi (aka “Ras edh Dhaher” – Head of the back of the hill – in the PEF maps). Further, in the center background, is the narrow Hilazon creek. 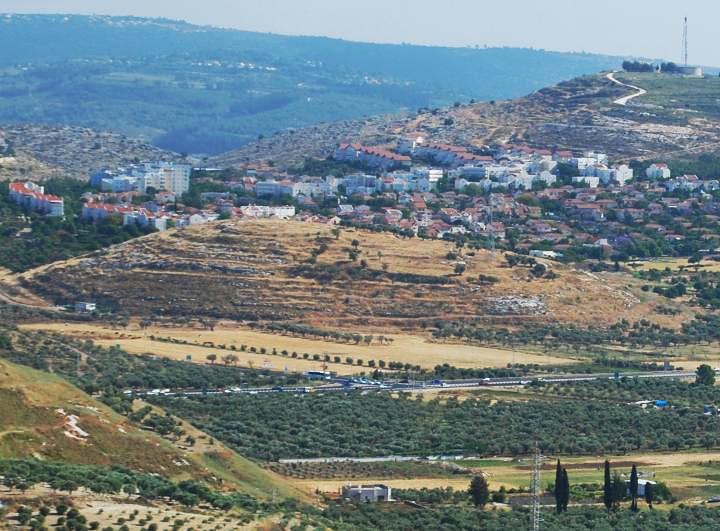 There were two ancient roads that passed at this site – 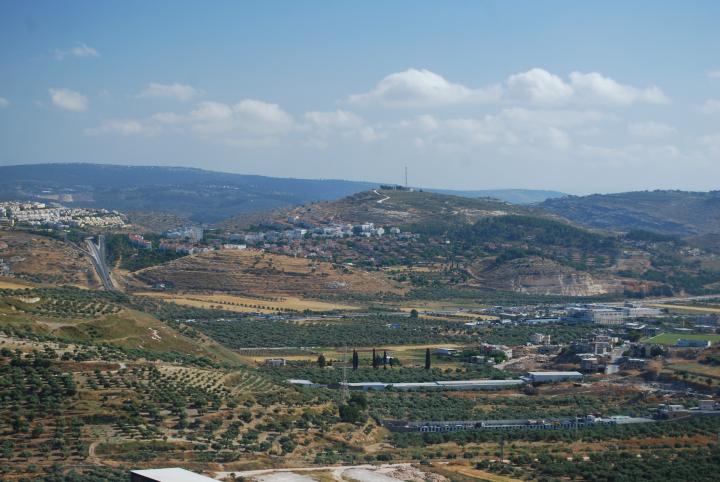 Another view, from the east, is seen below. 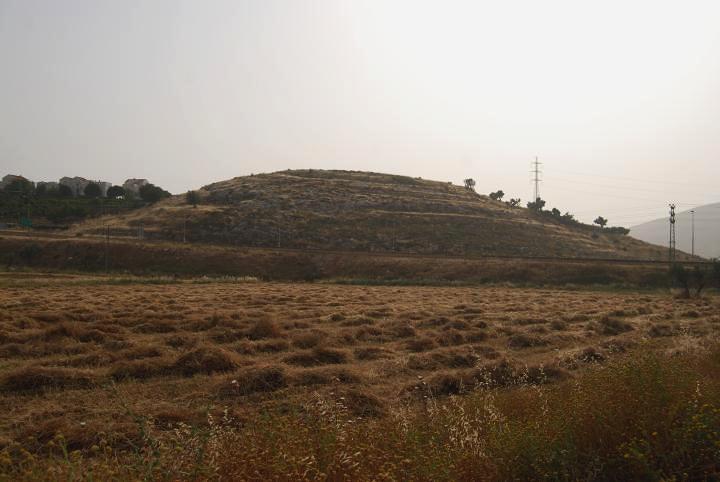 On the east side is a modern water pump  station which supplies water to the area, and was probably built on earlier period springs. 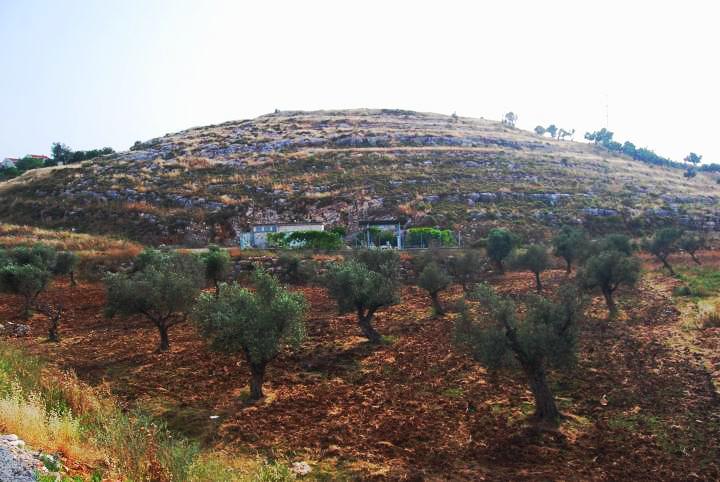 The south side of Khirbet Kabra faces the modern houses of Giv’at Ram. An aerial view, as captured from the quadcopter in May 2014, shows the hill from the south side. In the background is the valley of Beit-Hakerem, with the village of Bi’na on the left and Karmiel on the right. 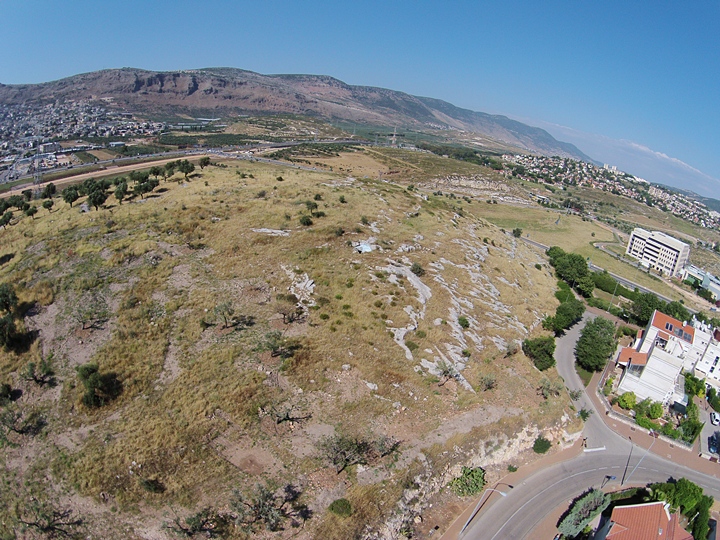 Khirbet Kabra is also seen from the ground level, behind a modern garden in Giv’at Ram – one of many beautifully designed landscapes in the city. 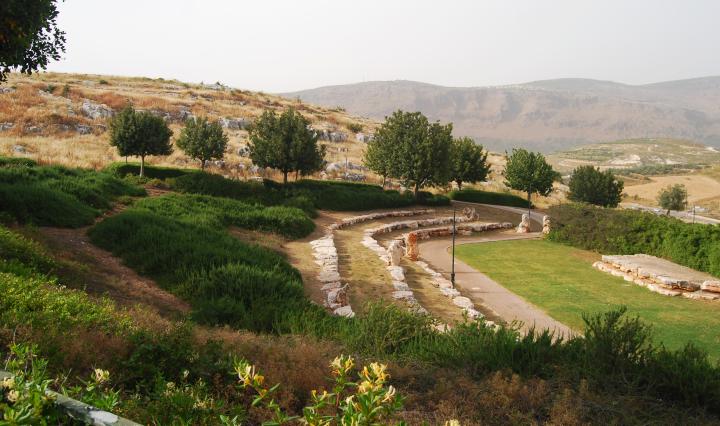 Above this south side,  just below the top of the hill, is an ancient rock-hewn tomb – probably dated to the Roman or Byzantine period. It was recently converted to a Jewish righteous (Tsadik) tomb, painted in light blue, and became one of the many pilgrimage sites established around ancient righteous tombs in the Galilee. 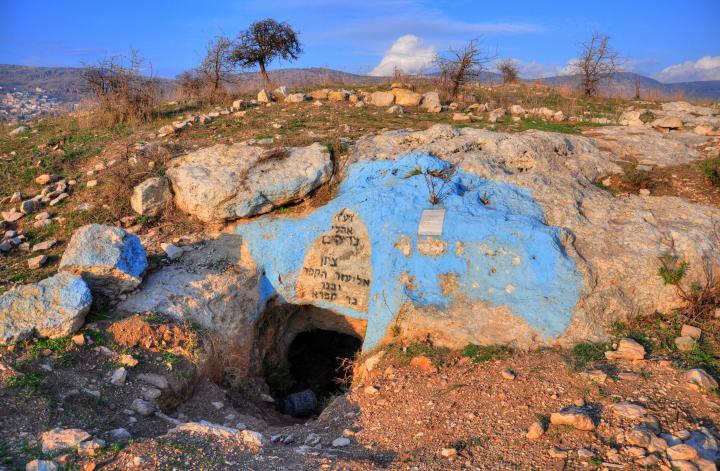 This righteous tomb is identified as the tomb of Rabbi Eliezer Hakappar and his son Bar Kappara.

The interior of the tomb, which now functions as a prayer room, is shown below. 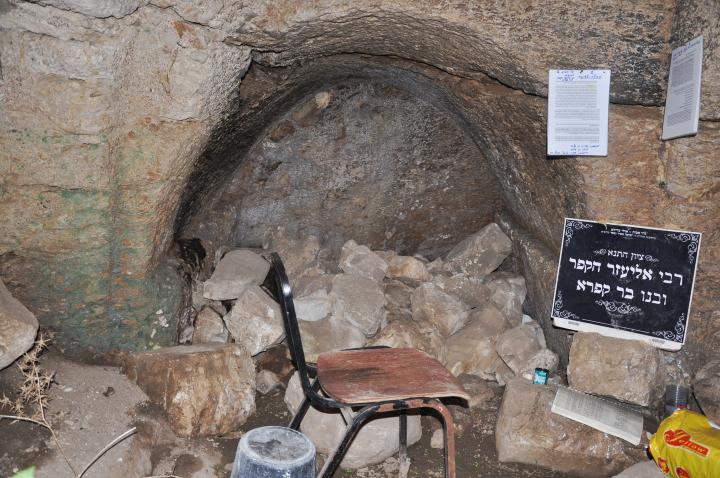 Their names – Kappar/Kappara – actually sound in Arabic like Kabar or Kabara – which may have been the reason of this identification in Khirbet Kabra. 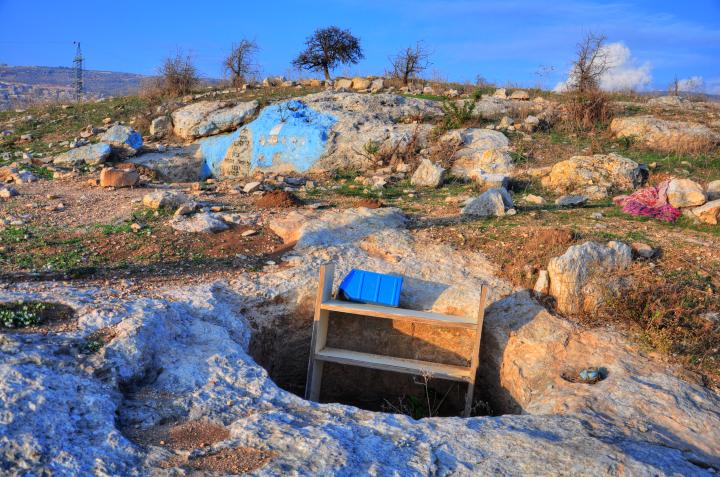 The west side of the top of the hill is seen in the following picture.   In the background, on top of the round hill, are ruins of yet another Byzantine Monastery – Khirbet Madrasah. 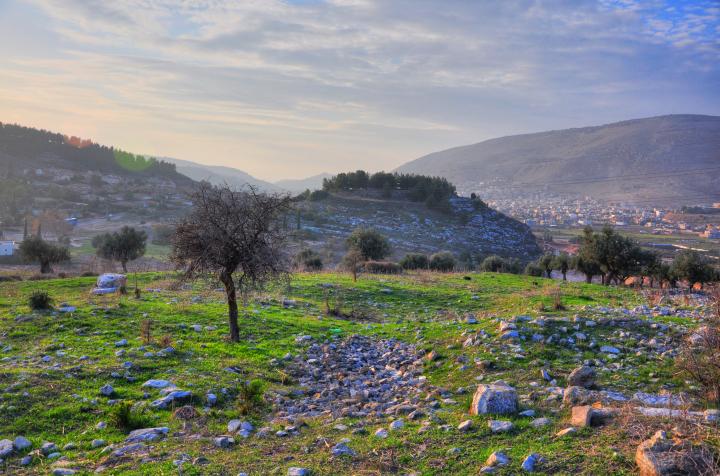 The archaeologists team, directed by Edna Stern,  opened an excavation square along the western fringes of the ruin, and revealed three layers: 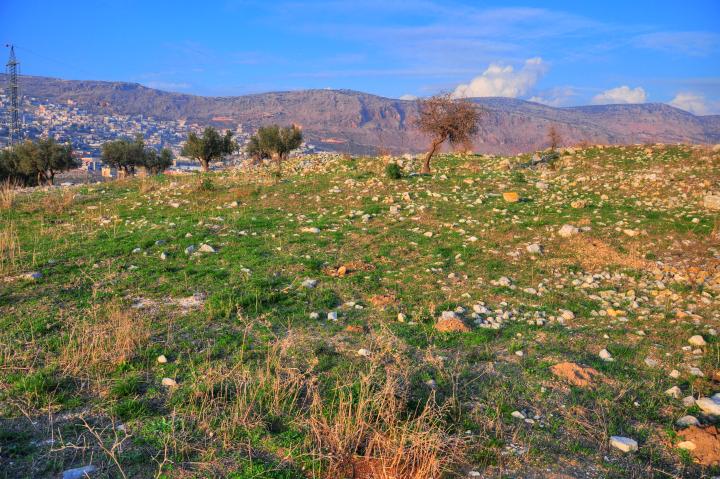 Outside of the excavation square was an area where traces of a mosaic floor was located, indicating that a public building may have existed in the Byzantine period. The excavators suggested it was a church.

An additional area near the square indicated a possible existence of an industrial installation, perhaps a winepress. Since most of the stones were robbed, it is difficult to establish these assumptions without further excavations. 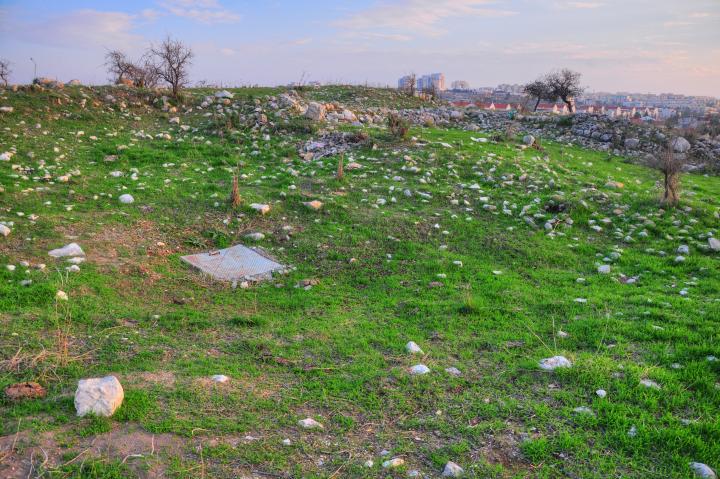 The north side of Khirbet Kabra overlooks the Beit-Kerem valley. 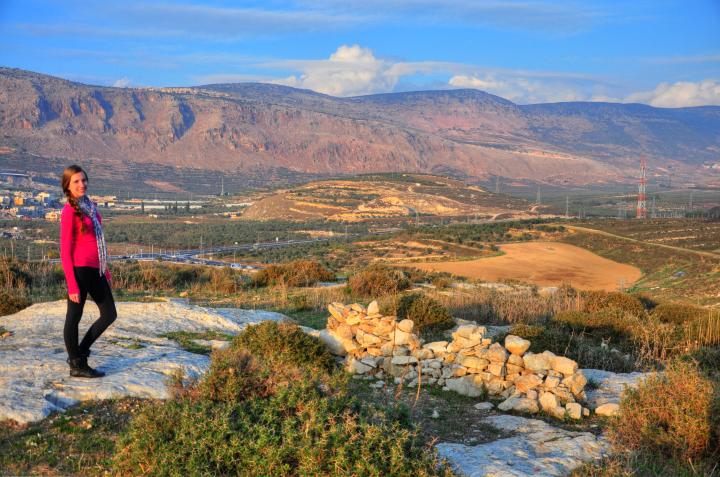 There are many cisterns located on the hill, as this sealed one. They were used to collect the rainfall from the rooftops, and store the water in order to provide the water supply. 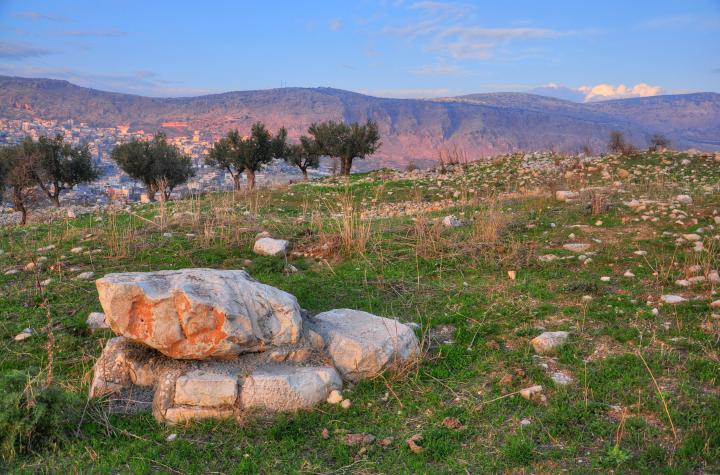 A small grove of olive trees grow on the north-west foothills: 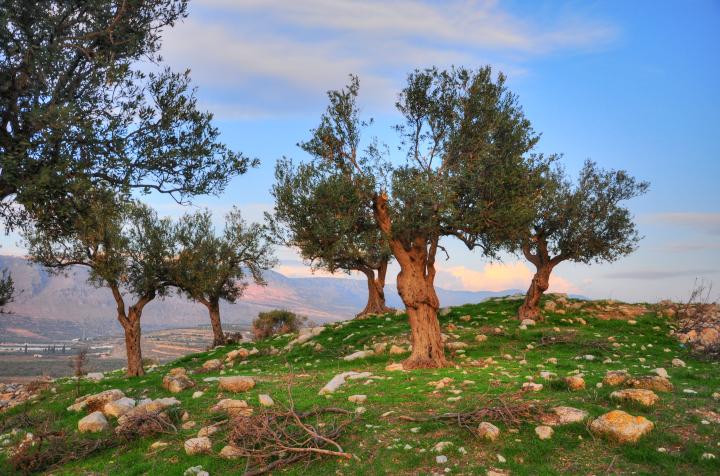 Another view, towards the sunset on the west: 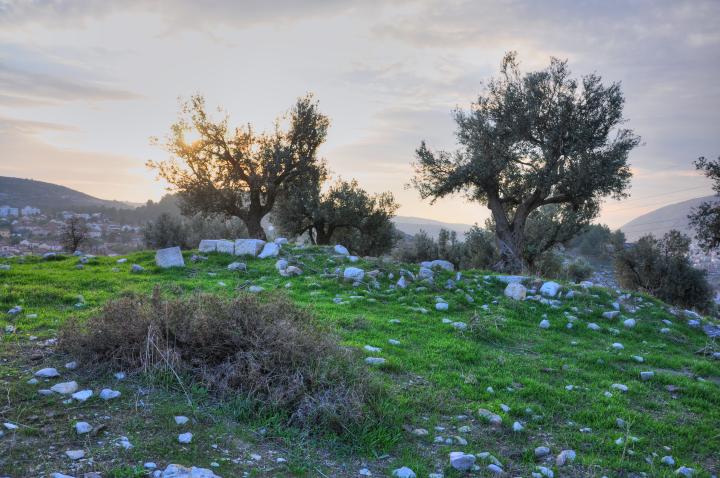 A group of daffodils (Narcissus) blossoms during early winter on the south side of the hill. The daffodil is identified as the “Lily of the valleys”, as in the Bible ( Song of Solomon 2 1): “I am the rose of Sharon, and the lily of the valleys”. 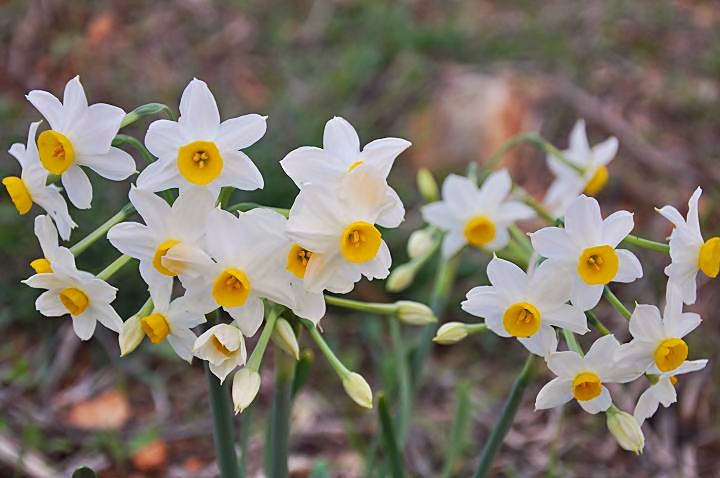 Another group of flowers is of the type “Ornithogalum lanceolatum”, or the common name of “Bethlehem Star” – which is named after the “Christmas” star that revealed the birth of Jesus to the wise men. 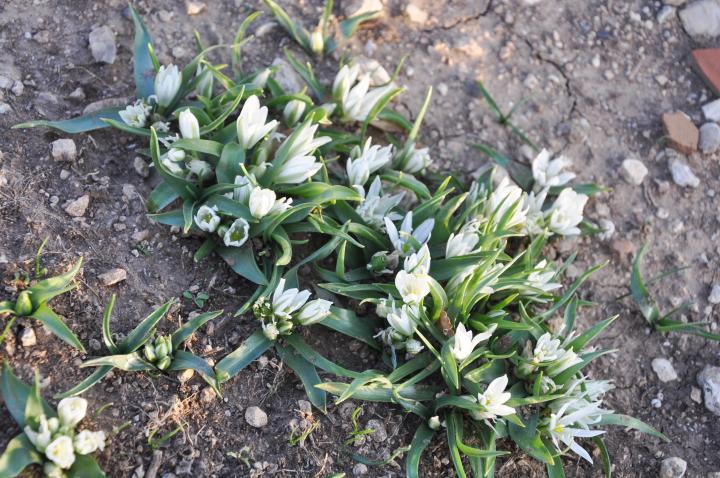 On top of the hill, a number of interesting thorny trees caught the eye of Amit. They stand out like natural sculptures, with a strong contrast to the blue sky. The type of this tree was not yet identified by us. 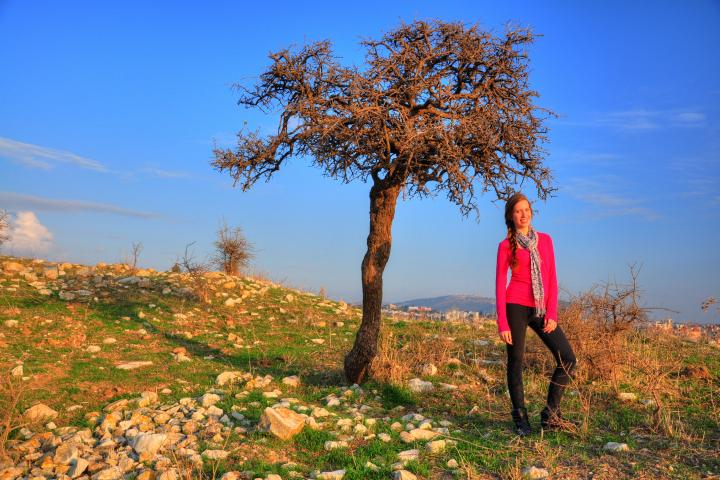 Another view of this tree (we fell in love with its twisted, thorny view): 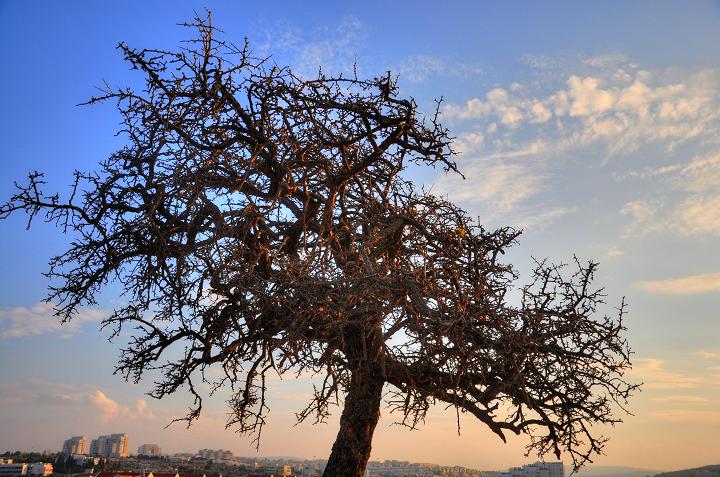