Remains of a Roman and Byzantine period village. Identified as Kerioth, birth place of Judas Iscariot.

Remains of a Roman and Byzantine period village, covering a large area (200 Dunams – 20 Hectares), on the north-west side of the valley of Arad, on the fringe of the Judean desert.

The site was identified as Kerioth, birth place of Judas Iscariot (“Man from Kerioth”), one of the twelve apostles of Jesus, who betrayed Jesus.

The ruins of Horvat Kerioth are located along the eastern side of road #80 from Arad junction to Yattir, just before the road starts to ascend up to Mt. Amasa. The site is located at an altitude of 639m, 230m below the summit of Mt Amasa which is on its north side.

The aerial map shows the points of interest. 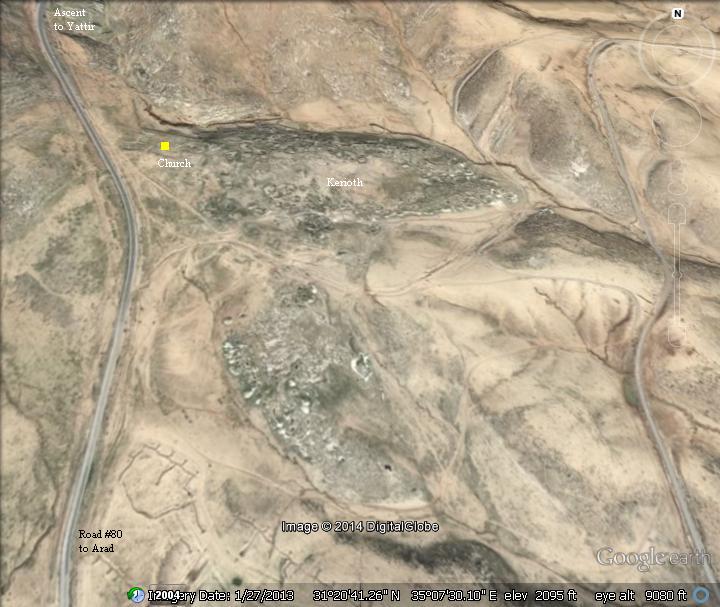 A place called Kerioth  is named among the towns within the area of the tribe of Judah  (Joshua 15: 20, 25):  “This is the inheritance of the tribe of the children of Judah according to their families… And Hazor, Hadattah, and Kerioth,…”

Remains of the second temple period were also found in the archaeological excavations. Burial caves, dated to the Roman and Byzantine periods, are located on the north side of the town. Many cisterns, oil presses and installations are located in and around the site.

The site was identified as  Kerioth, the birth place of Judas Iscariot, one of the twelve apostles of Jesus, who betrayed Jesus (Matthew 10:2-4):

“Now the names of the twelve apostles are these… and Judas Iscariot, who also betrayed him”.

The illustration shows Judas kissing Jesus in the Garden of Gethsemane  after he brings in the soldiers (Mark 14 :43-45) : “And immediately, while he yet spake, cometh Judas, one of the twelve, and with him a great multitude with swords and staves, from the chief priests and the scribes and the elders. And he that betrayed him had given them a token, saying, Whomsoever I shall kiss, that same is he; take him, and lead him away safely. And as soon as he was come, he goeth straightway to him, and saith, Master, master; and kissed him”.

The family name Iscariot is based on Hebrew : Ish-Krayioth, which is composed from two words: Ish (man) + Krayioth (towns, suburbs). Thus the meaning of Iscariot is “towns man” – if translated explicitly. Judas or his ancestors, came from that place.

Scholars suggest an alternative identification of Kerioth as an ancient city in Samaria, 2 KM north of Shiloh, now an Arab village of Kerayot. 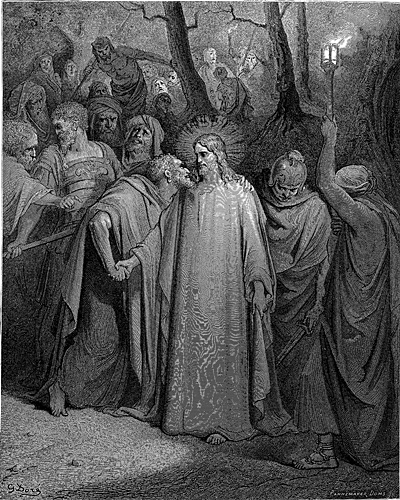 As a frontier desert village, Kerioth was probably settled by veteran soldiers at the end of the 2nd Century. These settlers received land for raising crops, and also assisted in the protection of roads and fortresses around the site. The settlements were part of the empire’s attempts to fortify the eastern frontier of the Roman empire – the Limes Arabicus. The border line extended 1,500km from Northern Syria to the Red Sea, and its defense was based on supporting villages, forts, watchtowers and connecting roads. This protected the empire from attacks of the barbarian tribes of the Arabian desert. At the end of the 3rd century the Limes was restructured by Diocletian, renamed to Limes-Palaestinae.  It continued to support the defenses of the Byzantine empire until the 6th Century.

The cities and roads during these periods are indicated on the Biblical Map below. Kerioth  is indicated as a red point, and is positioned near the central ridge route road from the city of Hebron and Malatha (where the regional Roman military cavalry headquarters – the Cohors I Flavia Equitata – were located during the Byzantine period). 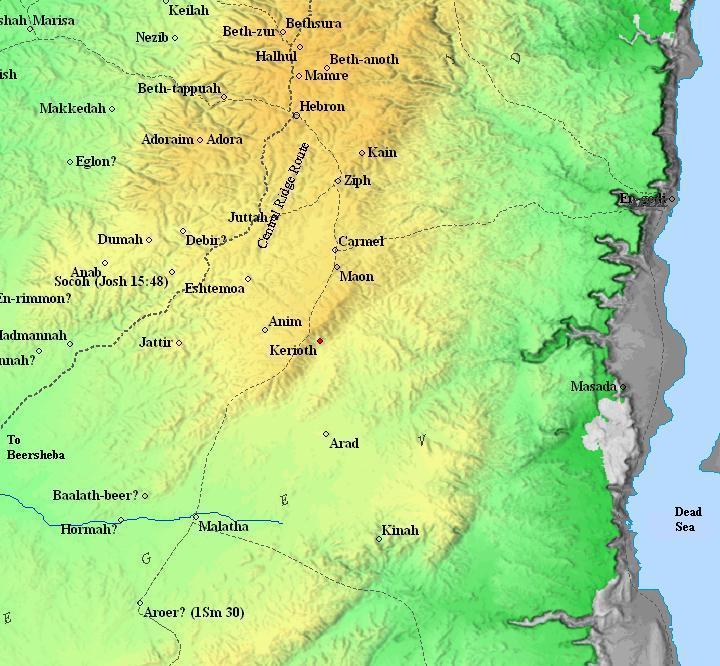 Map of the area around Kerioth   – during the Biblical through Roman periods  (based on Bible Mapper 3.0)

In 1993 Derfler and Guvrin excavated a Byzantine period church, which is located on the western edge of the village. Although the excavations were limited to a small section of the town, it can be assumed that the residents of Kerioth gradually converted to Christianity during the 5th Century.

During this period, the caves in the site were reused for dwelling. This caused severe damages to the remains of the Byzantine period.

Conder and Kitchener surveyed the area during the Survey of Western Palestine (SWP) in 1873. A section of their map is here, with the site (here: Khurbet el Kureitein) in the center: 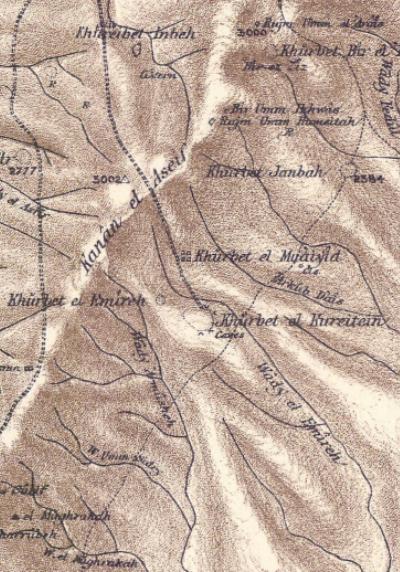 Part of map Sheet 25 of Survey of Western Palestine,

They identified Kerioth as the ruins named “Khurbet el Kureitein”, and also revealed the church. This is their report (see Volume 3, p409):

Robinson, who saw this ruin from a distance, but did not visit the place, suggested the Kerioth of Joshua xxv. 25, unless the latter is to be read with the next name, as Reland suggests.

Guerin says that the ruins cover an extent of at least 180 meteres in circumference. The direction of many streets can still be distinguished. The houses, whose remains are strewn everywhere over the ground, appear to have been constructed of materials regularly cut ; most of them had caves or cellars below them, cut in the rock.

He also observed at the western end of the site the ruins of a Christian church, forming a rectangle, lying east and west.

Heaps of well-cut stones marked its outline. It was 30 paces long by 17 broad, and was preceded by a square atrium 37 paces on each side”.

The ruins are located on an open public area, on the side of the road from the forest of Yattir towards Arad.

View of Kh. Kerioth is seen here from the observation terrace on Mt Amasa.  The ruins cover a large area on the east side of the road. In the background are the mountains of the Judean desert, and behind them the depression of the Dead Sea and the mountains of Jordan. Kerioth is located on the desert fringe, with few settlements to the east of the site. 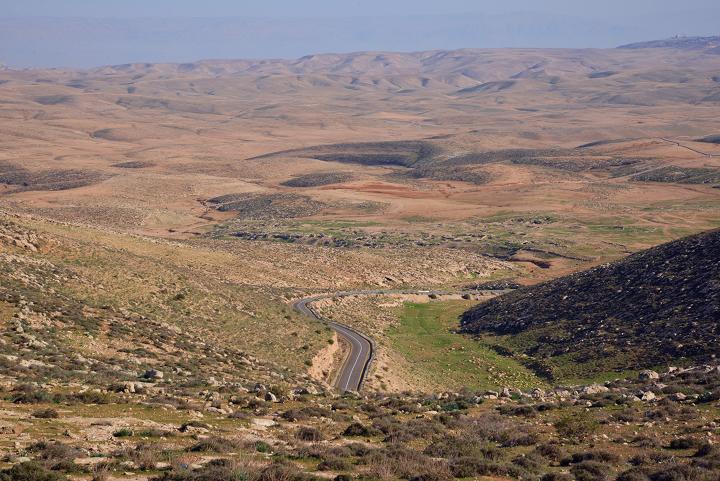 A closer look on the ruins is seen in the next photo. The north side of the town is built  along the southern bank of the valley of Nahal Adasha (Wadi el-Akud). 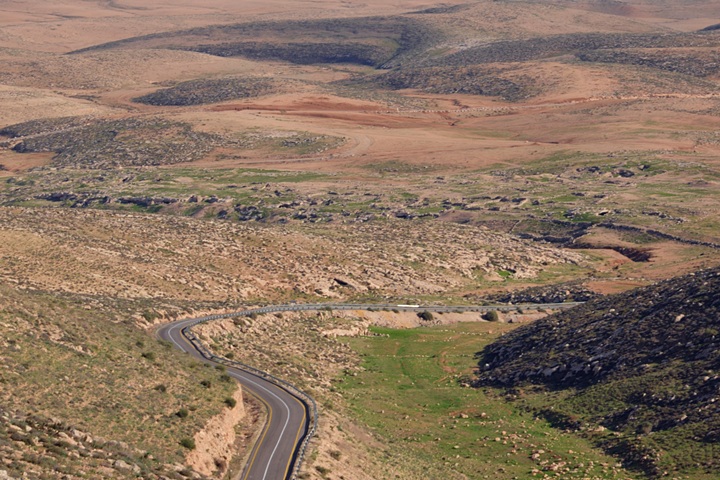 Our drone captured this aerial view from the west side. The site covers a large area, parallel to the modern road. The ruins of the church are located on its north west side. 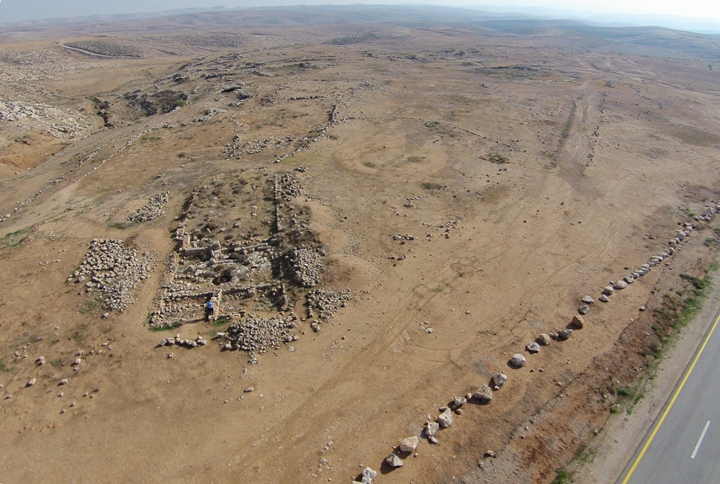 The site has not been excavated yet, except for the church on its northwest side. Its ruins are spread over a large area. In the far background, on the top of mountain, is a small communal settlement (Kibbutz) named Har Amasa, established in 1983. 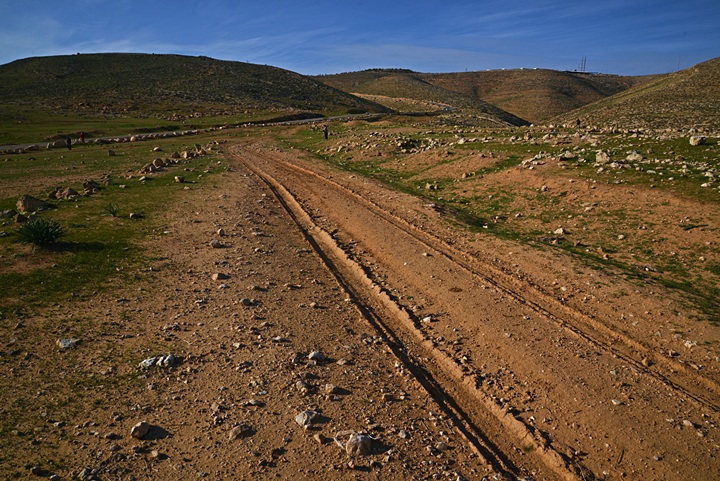 The PEF report of 1873 describes the ruins: “Guerin says that the ruins cover an extent of at least 180 metres in circumference. The direction of many streets can still be distinguished. The houses, whose remains are strewn everywhere over the ground, appear to have been constructed of materials regularly cut ; most of them had caves or cellars below them, cut in the rock”. 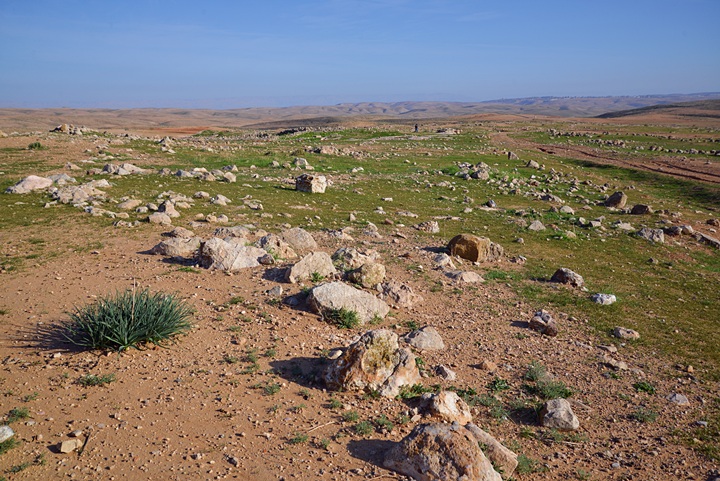 On the west side of the road are remains of a structure and an access road. 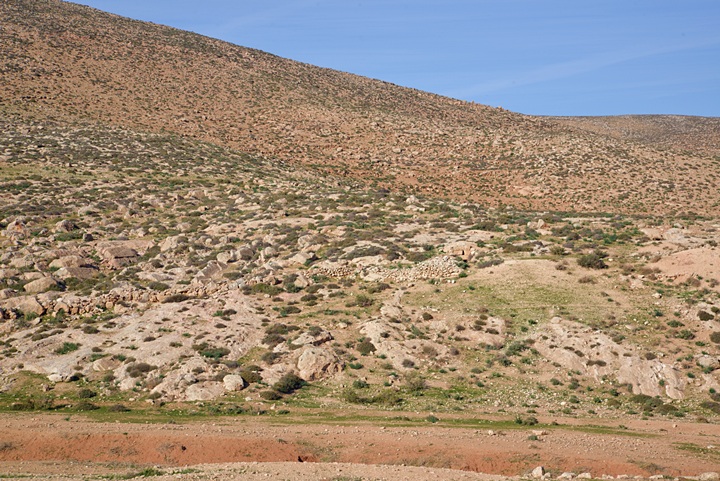 On the north-west side of the town are remains of an early Byzantine church.   This  drone photo (captured on December 2015) is a west view of the excavated church. 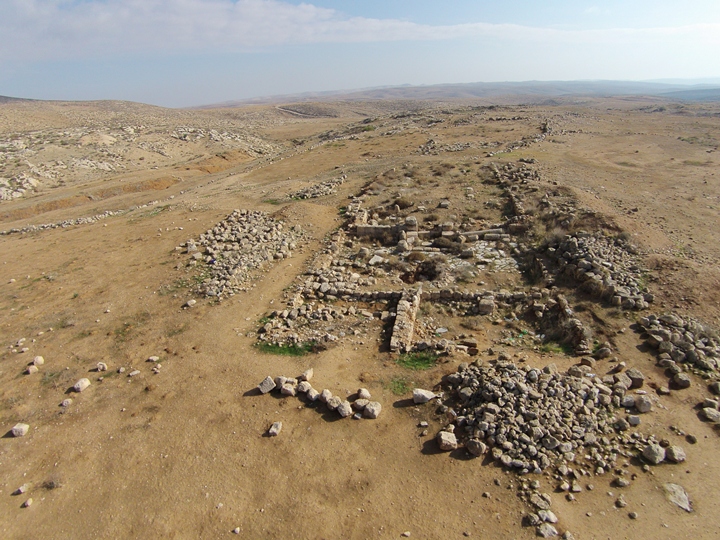 In the next photo is the guide of the tour, the archaeologist Eli Shenhav, between the ruins of the church. 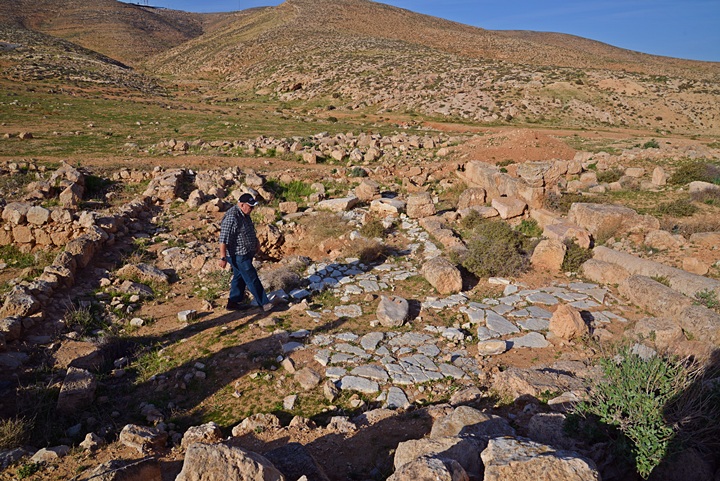 The floor is made of large flat stone slabs. A mosaic floor, with inscriptions, was brought to lights during the excavations (by Yehuda Govrin), but its stones were unfortunately stolen. 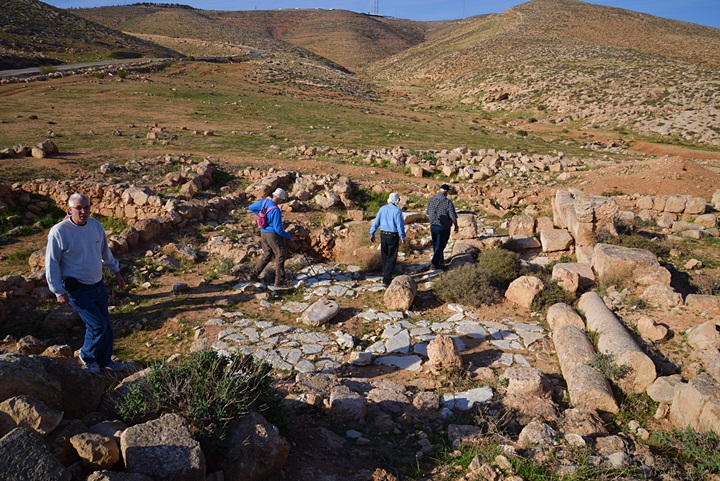 The next photo shows a section of the church, with remains of the columns. 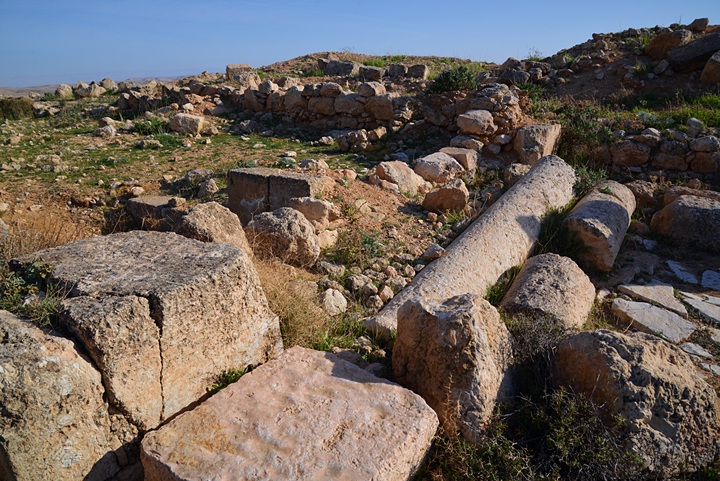 The PEF report of 1873 describes the findings: “He also observed at the western end of the site the ruins of a Christian church, forming a rectangle, lying east and west. Heaps of well-cut stones marked its outline. It was 30 paces long by 17 broad, and was preceded by a square atrium 37 paces on each side”. 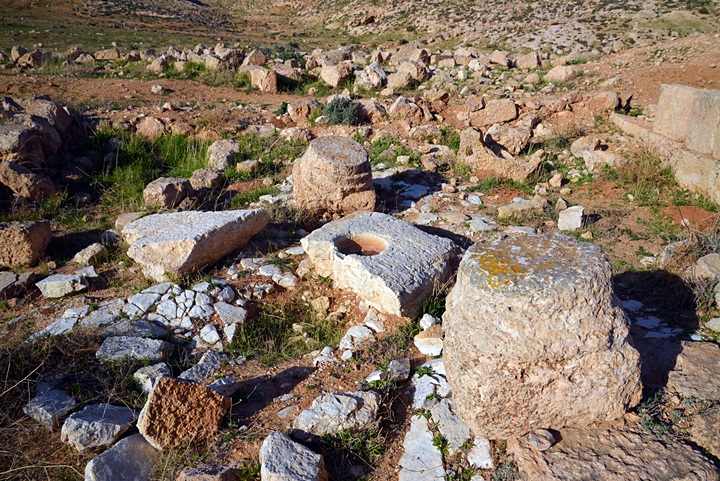 Bases of the columns mark the plan of the church. 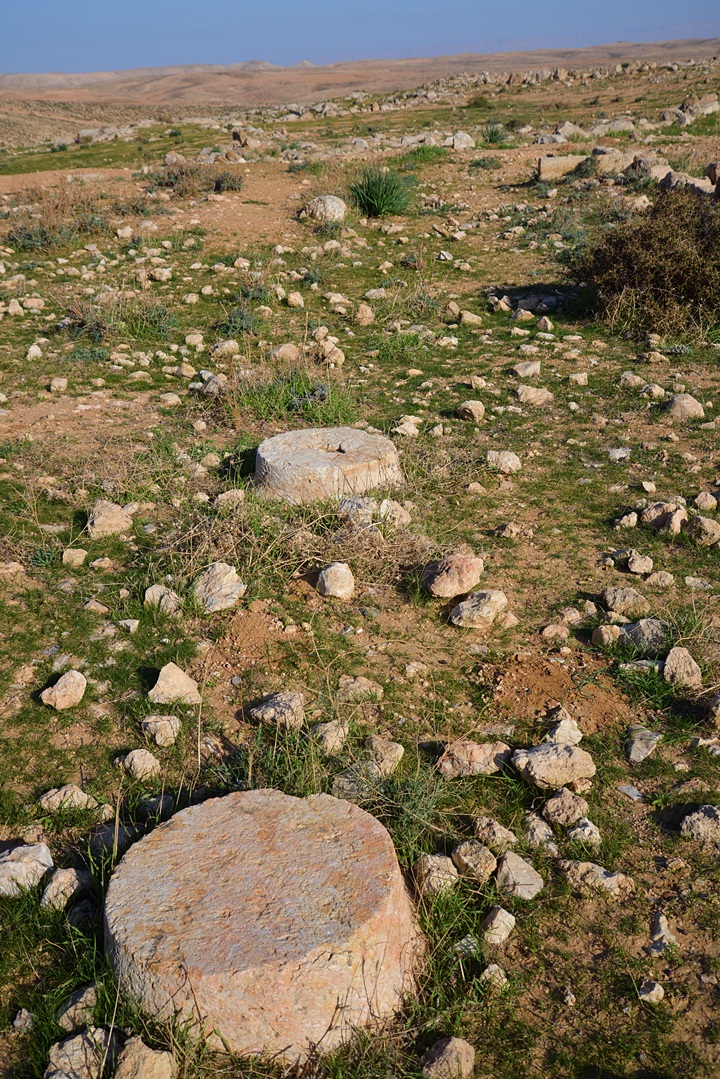 A cistern is built near the church. This was probably part of the monastery. 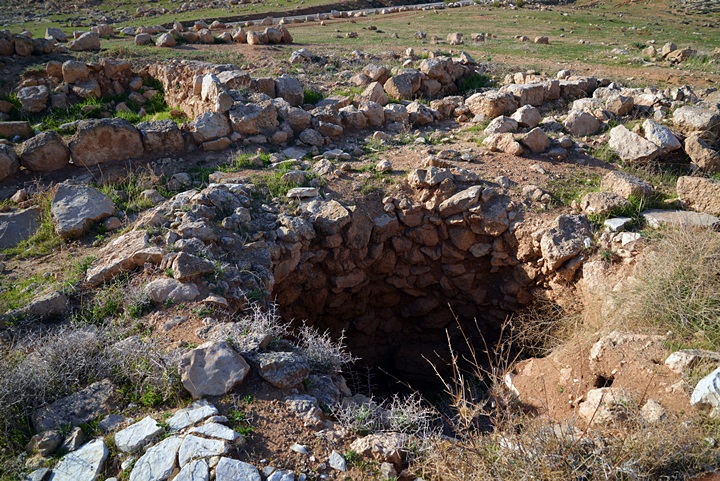 A Roman road crosses the mountain above Kh. Kerioth. This road, known as a section of the central ridge route, connected the city of Hebron in the north and Malatha (where the regional Roman military cavalry headquarters – the Cohors I Flavia Equitata – were located during the Byzantine period). A road ascended from Kh. Kerioth to the Roman road, as illustrated in the PEF map. 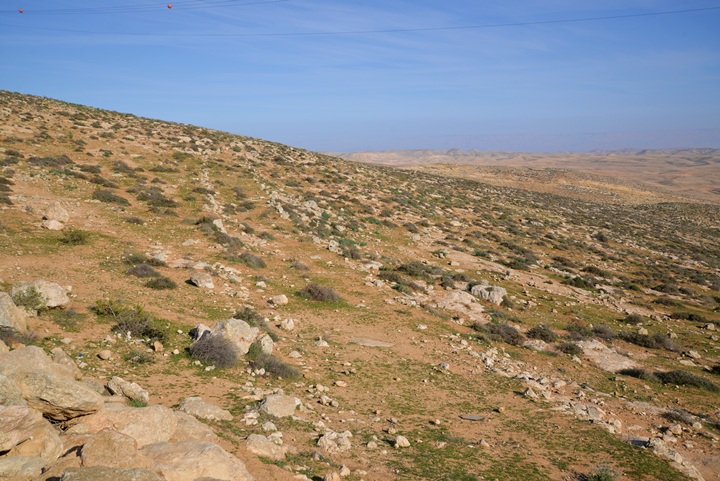 Two fortresses of different periods – Israelite and Roman – are located on the north-east side of the Roman road, just above Khirbet Kerioth. The ruins of the Roman fortress is seen here, overlooking the Judean desert. 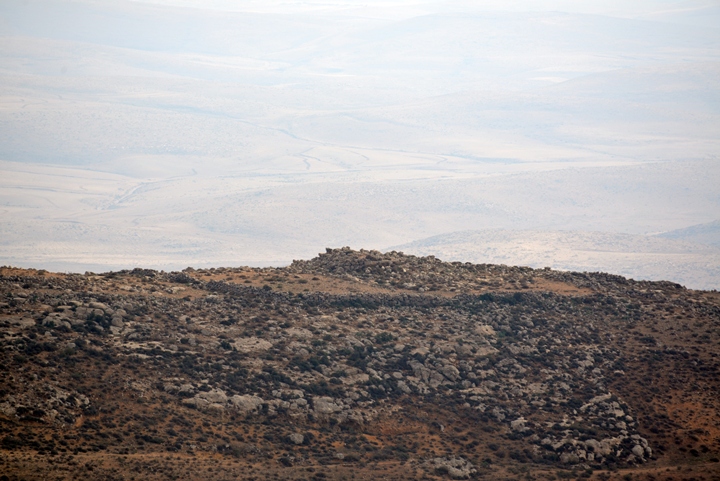 An old  Jordanian police station was located north of the observation terrace. It was named Lucifer (or Lusifar), based on the nearby ruins. The police station protected the area around the south side of the west bank area, which was held until 1967  by Jordan. A border crossing, between Israel and the West Bank, is now located just north of the station. This shows that the military importance of this area, on the edge of the Judean desert, did not change in the course of thousands of years. 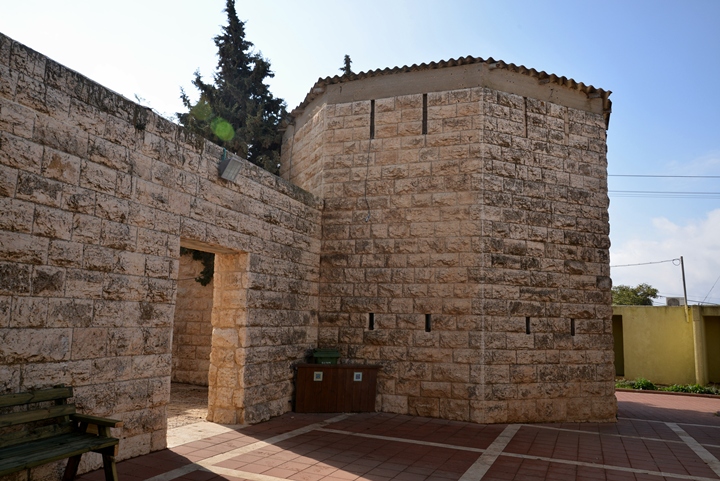 A religious “Mekhina” (Pre-Military academy) now occupies the former Jordanian police station, as part of the religious moshav of Beit Yatir (aka, Metzadot Yehuda).  The Mekhina prepares the 18th-19th year old high schools graduates in Israel to the military service or to higher learning. There are ~30 such institutes, either religious or secular. 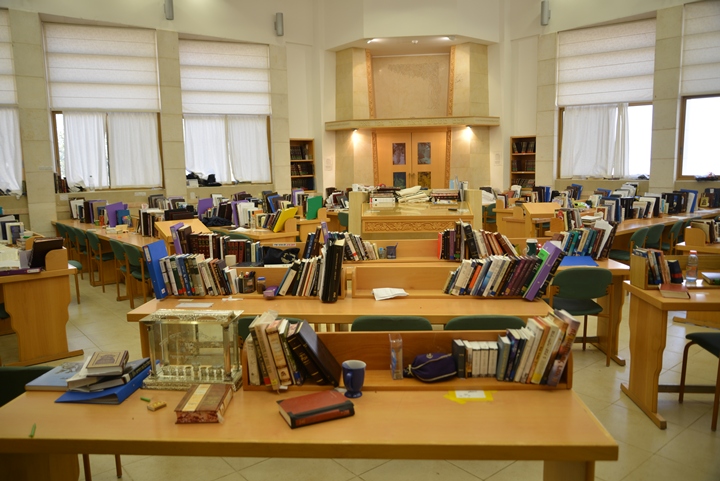 A winter flower found in this area is the Iris Palaestina (Israeli Iris), a small flower with white flowers and yellow strips. 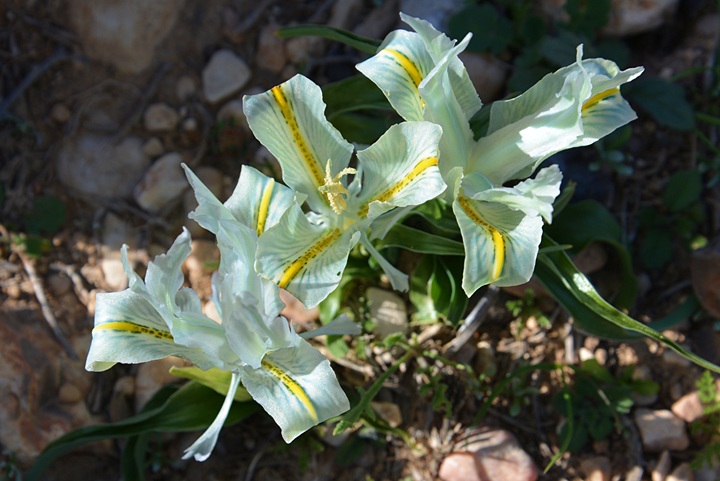 Another photo of the Iris at an early stage: 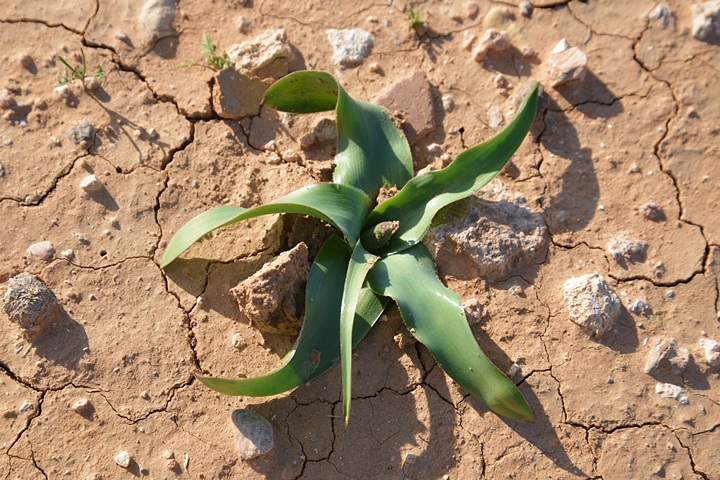 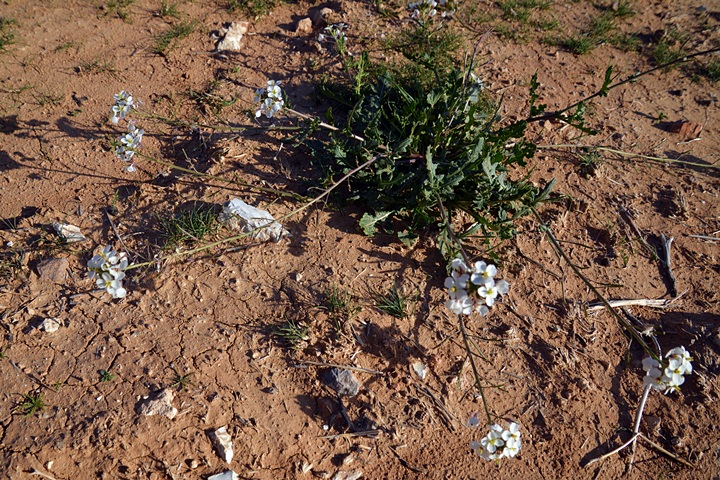 Traces of the tunnels dug by the blind mole rat are seen in the next photo. The animal (Spalax Ehrenbergi) is described in the Bible, in conjunction with inferior hidden animals such as moles and bats (Isaiah 2:20): “In that day a man shall cast his idols of silver, and his idols of gold, which they made each one for himself to worship, to the moles and to the bats”. The Hebrew text reads “Lakhpor Peroth”,  which gave its modern name: Khapharpereth. 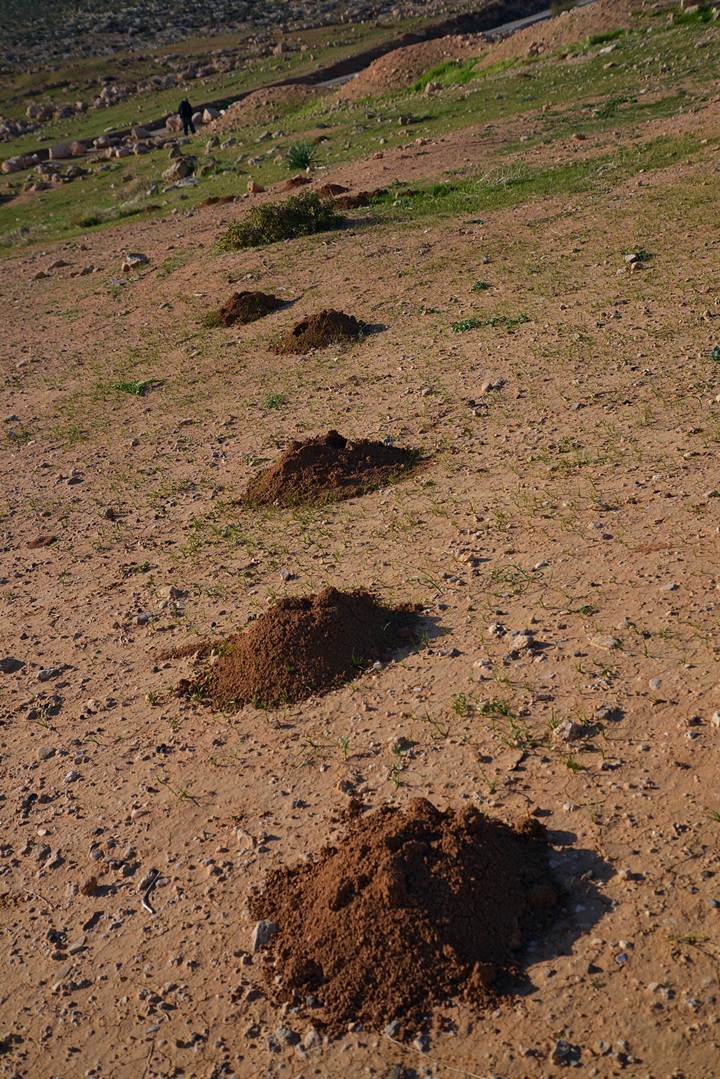 (2) Matthew 10: 2-4: “Now the names of the twelve apostles are these… and Judas Iscariot, who also betrayed him. 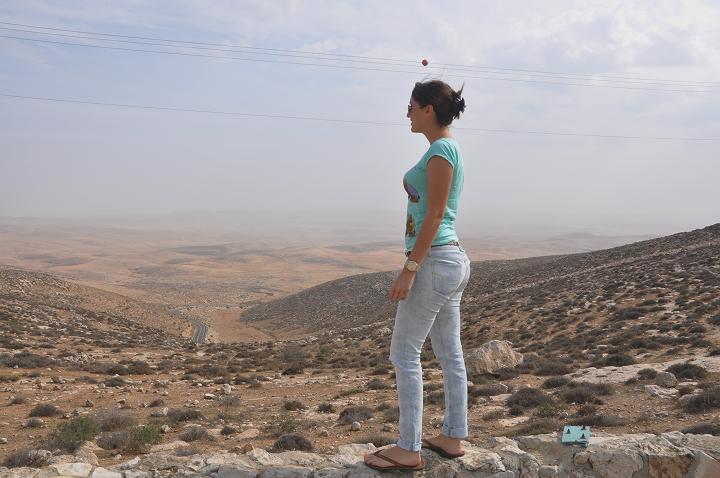 This page was last updated on Dec 15, 2015 (Added aerial views and Beit Yatir)