Mount Carmel and the shore of Carmel have more than 210 prehistoric known sites, spanning from 150,000 years ago.  One of the famous prehistoric site is the Kebara cave – the southern most cave along the western cliffs of the Mt. Carmel.

The cave is located near the Ma’agan Michael interchange on Highway #4, south of Zikhon Ya’akov. It is 3km away from the Mediterranean sea.

A nature path leads from the south side of the cliff to the cave. It is permanently closed in order to protect the antiquities and the bats that occupy the cave. 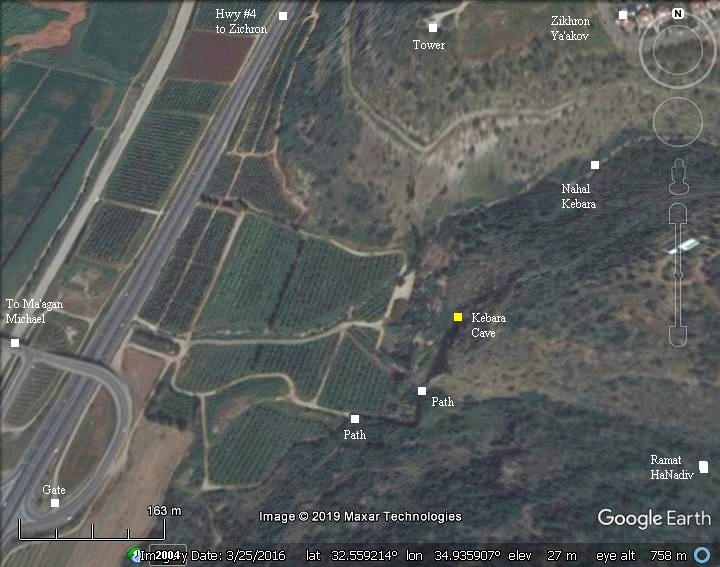 Pre History in the Carmel:

Based on the majority of excavations in the Carmel region, most scientists believe early man has been in this area over the last 150,000 years.  Only a few sites, such as the caves in this site, were populated during earlier periods (Lower and middle Paleolithic period, starting from 250,000 years BC).

In the Middle Paleolithic period (80,000-40,000 BC) there were the majority of the settlements in the Carmel.  These people knew how to make knives, scrapers and points out of flint. The popular areas of the Carmel were the sites of the source of the flint stones, and there were many workshops that prepared theses tools. There were two types found in the Carmel: Homo Sapiens (our ancestors) and the Neanderthaloids (Neanderthal, the specie that eventually disappeared about 30,000 years ago). Note that this time coincided with the last Ice age (100,000 to 10,000 BC), and so the climate was wet and cold, and many Oak trees were growing in the Carmel.

The large caves along the western edge of the Carmel were the major settlements. Most of the other 210 sites in this region were either:

The cave was discovered in 1929 by Moshe Stekelis while working to dry out the Kebara wetlands in the coast line west of the cliffs.   Prof. Stekelis, an archaeologist specializing in prehistory,  later led expeditions to research the cave  (1951-1957, 1964-6565).   The first excavations were held in 1930-1 (by Turville-Petre). Additional excavations were conducted in 1968 and 1982-1990 (Bar-Yosef and Vandermeersch).

Kebara cave is located on one of the western cliffs of Mt Carmel, overlooking the Kebara (‘great’) wetlands between the cliffs and the Mediterranean sea shore. Its height is 60m above sea level, about 20m above the valleys on both side of the cliff.  The cave has one large hall – 26m long and 20m wide. Its entrance is arched, pointing north-west. In the ceiling are several domes, with one 20m high chimney opening to the surface of the cliff. The cave now is now sealed by a fence, occupied by bats and birds.

The excavators identified the following major levels, starting from the top and drilling down:

The most significant finding was in 1982, when a complete Neanderthal skeleton was unearthed in a depth 0f 7.8m. His head was missing, except for the lower jaw. The head was apparently removed by humans.  He was found lying on his back with his arms crossed on the chest.

This rare skeleton is the only Neanderthal skeleton found to date. The young male, who lived ~60,000 years ago,  was named Moshe after Stekelis.

(a) Approaching the site:

The cave is located on a cliff overlooking a valley, 2.5km from the present coast line. It is accessed from the Ma’agal Michael interchange on highway #4. 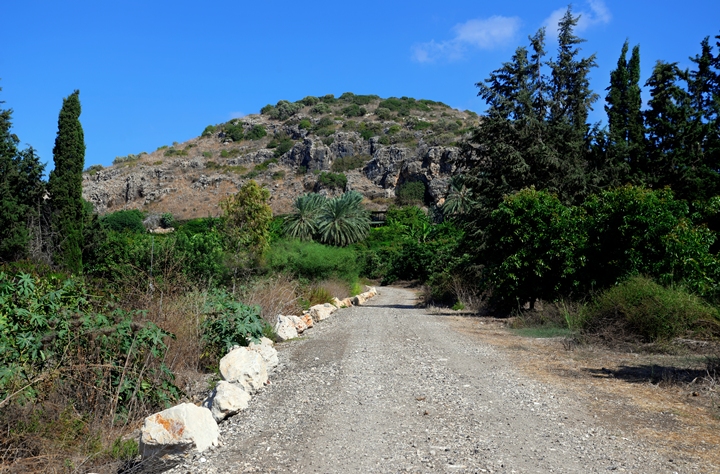 The cave is just above and behind a tropical garden oasis – Bustan Ha-Carmel or Bustan Avraham. In the 10 dunam area there are 120 various tropical trees and plants, planted by Avraham Hassidim.  It belongs to the Kibbutz Ma’agan Michael and the visit can be coordinated by the Nature Preservation company. 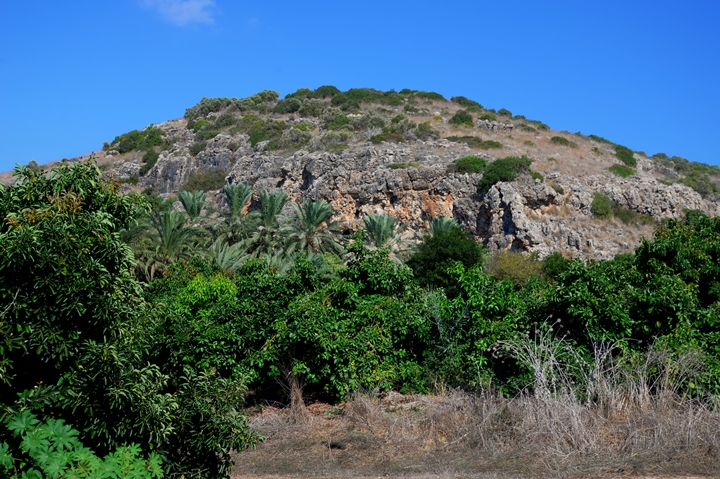 A nature path leads from the south side of the cliff to the cave. 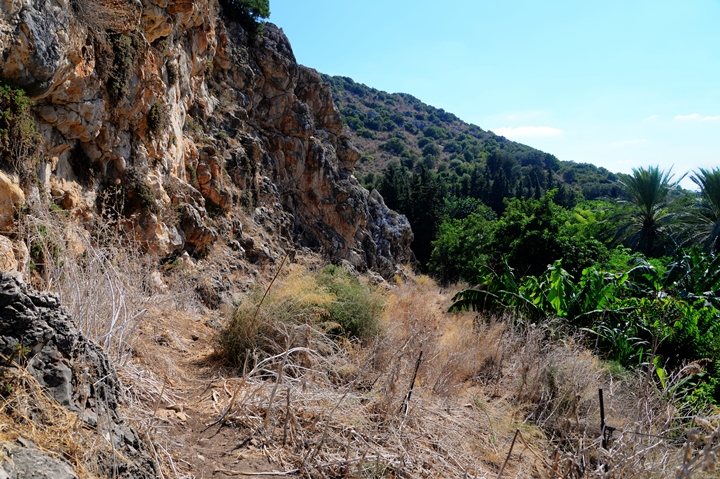 Along this short trail are several cavities on the face of the cliff, but the larger cave is on the northern end. 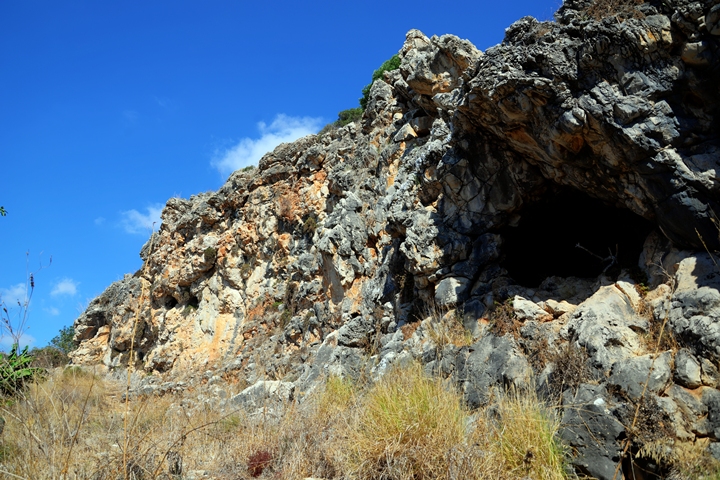 Uncle Amnon is seen here walking at the foot of the cliff.

A number of Rock Hyrax scrambled around take hiding while we were walking up the trail, but they fled too fast to be able capturing them with the camera. 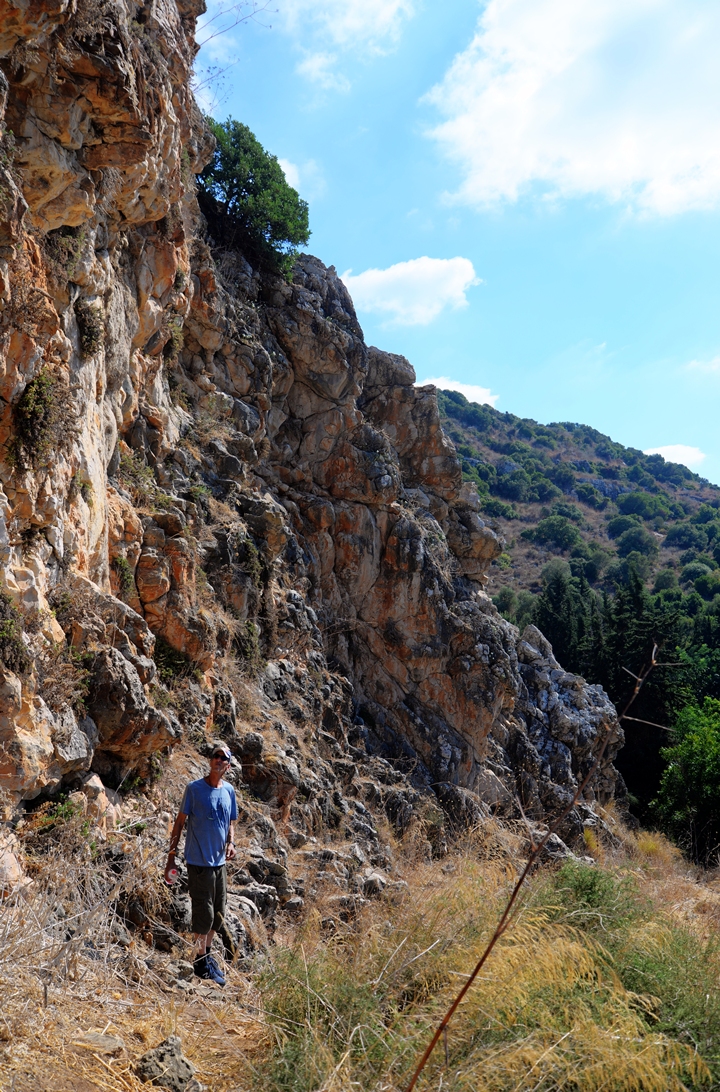 The opening of the cave is on the north side. The entrance is arched, pointing north-west. 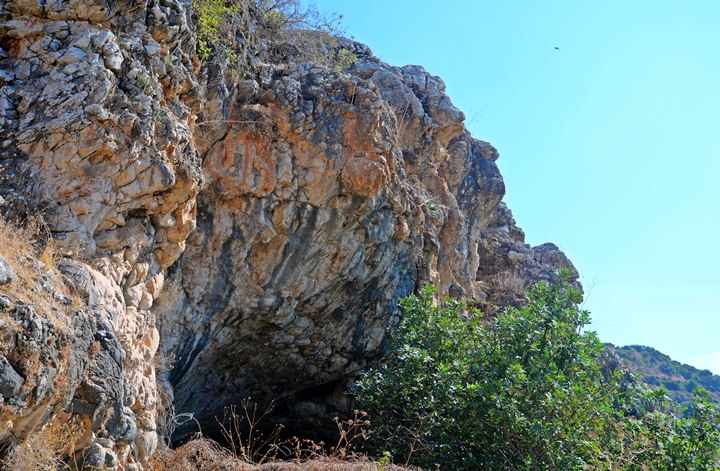 It is permanently closed in order to protect the antiquities and the bats that occupy the cave. We only managed to take some peek photos by holding the camera above the fence.

Inside the cave, hundreds of bats shriek constantly. (We recorded a short segment – click to hear). 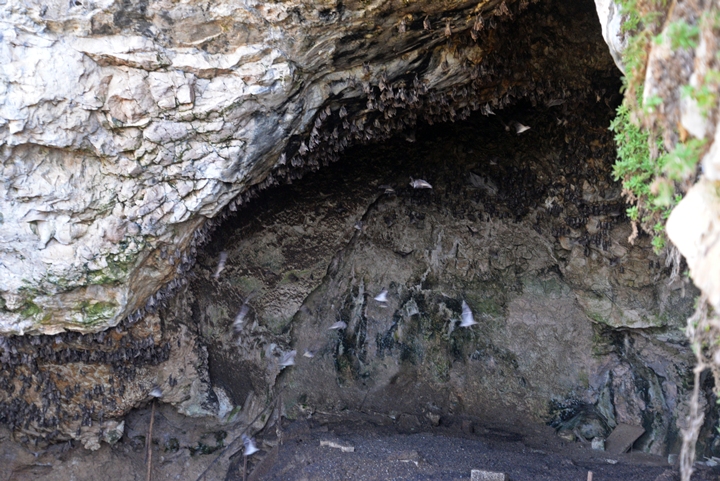 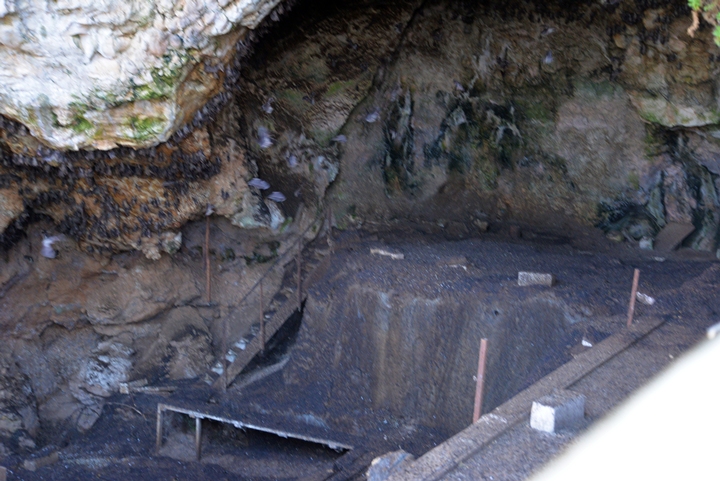 Near the entrance to the cave, Amnon found fragments of bones and what looks like a part of a flint stone spear. 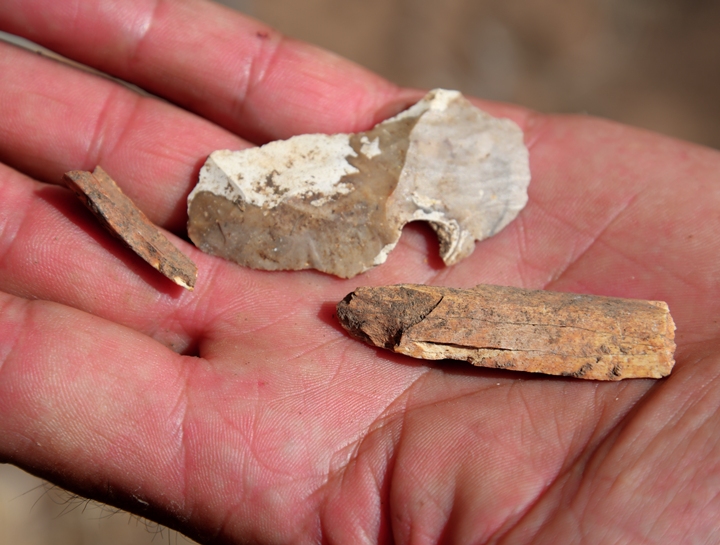 On the North side of the valley is a communication tower. Clearly, mankind advanced from the crude level of living on the entrance to the cave 10,000 years ago, and the modern world of internet and electronics… 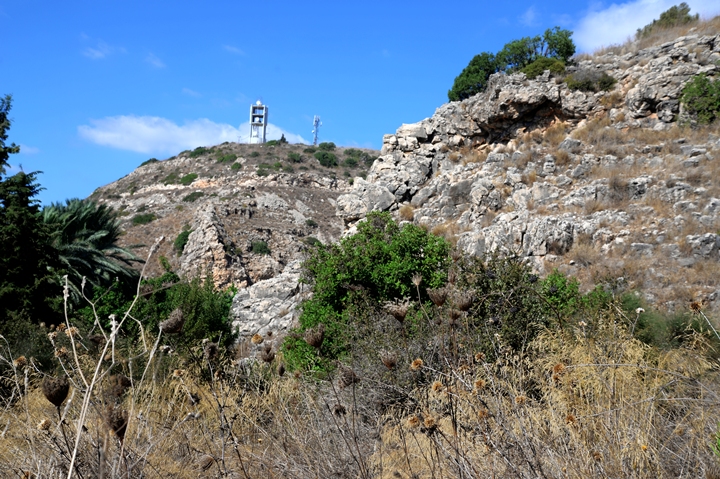 From the cave are views of the tropical garden below it. In the far background is Kibbutz Ma’agan Michael and behind it is the Mediterranean sea. 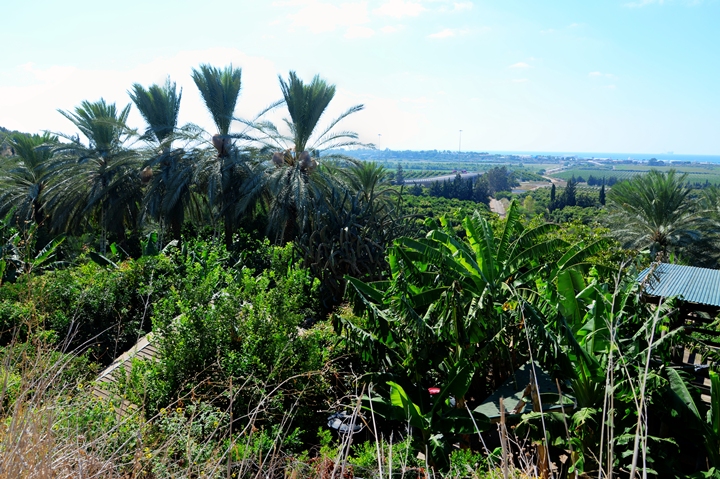 BibleWalks.com – Gateway to the sites of the Bible