This site is located on the Golan heights, above the north-east side of the sea of Galilee. This site is the ruins of an Arab village which was built on top of a Roman synagogue.

Horvat Kanaf is a beautiful site that overlooks the sea of Galilee from the southern Golan Heights, above the area of the north of the lake. In this site there are ruins of an ancient 3rd Century synagogue, the remnants of an Arab village (Mazrat Kanaf) , and a magnificent panorama of the Bethesda valley and the sea of Galilee.

Walking in the village brings you back 2000 years…

Horvat (Khirbet) Kanaf is located on the western slopes of the Golan heights, 400M above the north shores. It is located north-east of Moshav Ramot, and south of Maale Gamla, between two creeks (Kanaf and Safnun). A new settlement was built 1 KM east and above the site – the new Kanaf. 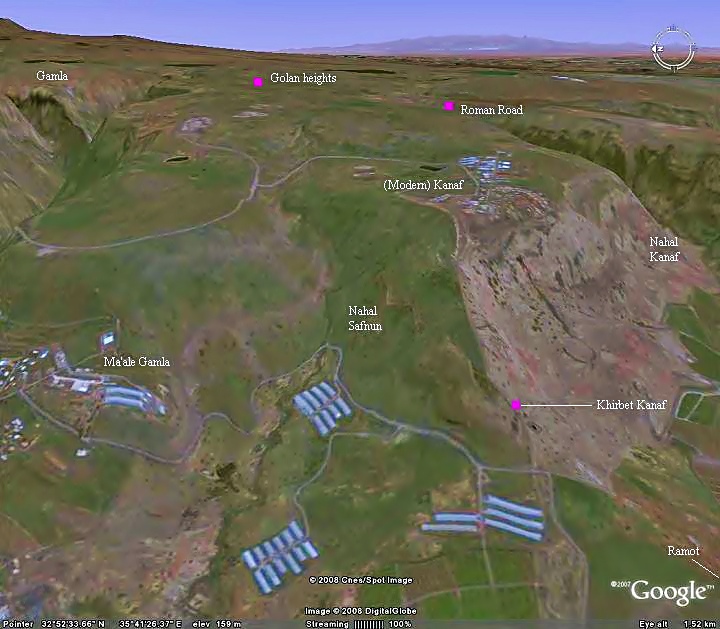 You can approach the site in different ways:

(a) Climb down from Kanaf to Horvat (Khirbet) Kanaf, which is on the road from the Sea of Galilee to Gamla, the famous “Massada” of the North.

(b) Taking take the road to Gamla, exit to Maale-Gamla village, drive towards the end of the village, then take the service road that takes you just below the site. This will require then a steep climb up to the site in about 15 minutes walking.

(c) Drive from Ramot, park under the site, and climb up.

The village reached its peak at the Roman and Byzantine times (37 BC-640 AD). After Jerusalem was destroyed, following the two revolts of 67-70 AD and Bar Kochba revolt (132-135 AD), Jerusalem became off limits to the Jews. Most of the population moved to the Galilee after the revolts, then many moved to the Golan during the Byzantine period (4th-7th century). Three dozen Jewish communities were established in the Golan, including Kanaf.

Although it is not referred in the New Testament, it is probable that Jesus visited the site, since it one of the closest villages to Bethesda and Capernaum and the center of activity of Jesus for 3 years (~27-30 AD).

The synagogue is typical of the 3rd Century Golan synagogues. Some of its stones are located on the site, others were relocated to the museum. The synagogue was probably reused in the Byzantine period as a church.

At later times, the village was used in the Arab and Ottoman periods. In the last century the large house, built on top of the ancient synagogue, was used as a barn. The houses of the Arab village also reused the ancient stones and some of the larger pillars.

The site was discovered in 1885 by the explorer Laurence Oliphant (references), and was visited at the same year by G. Shumacher.

Before the 6 day war (1967) the site was used by the Syrian army as a border fort, and the area around it was mined. After the Golan heights were taken by the Israeli Army, a tragedy occurred when 2 Archaeologists were killed after their jeep triggered  one of these mines.

A view of the site from the ruined village. Some of its building are seen on the top of the hill where the Late Roman era synagogue was standing. In the background – the sea of Galilee. 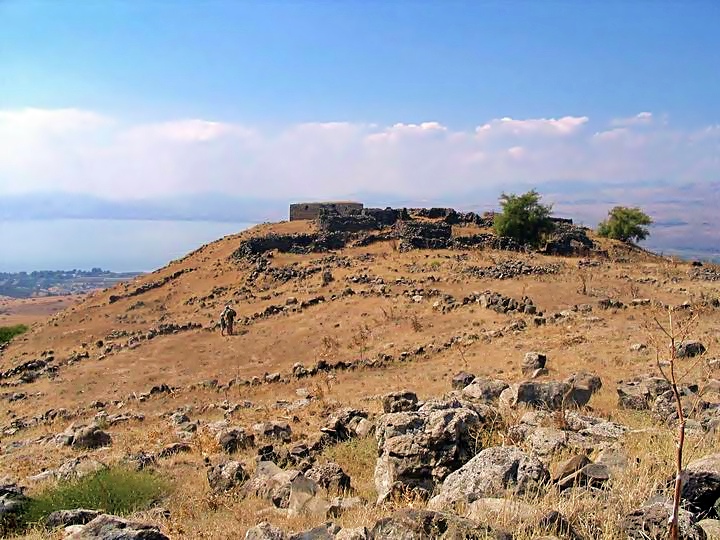 This is the view from the top of the village, where the Late Roman synagogue once stood. You can see that the 5 lower layers of the house used the ancient synagogue original stones.

Looking in the background scene: On the left is the north side of the lake, with Tabcha and Cappernaum on the top left shore.  In the center right is Bethesda and the valley of the northern Jordan river. 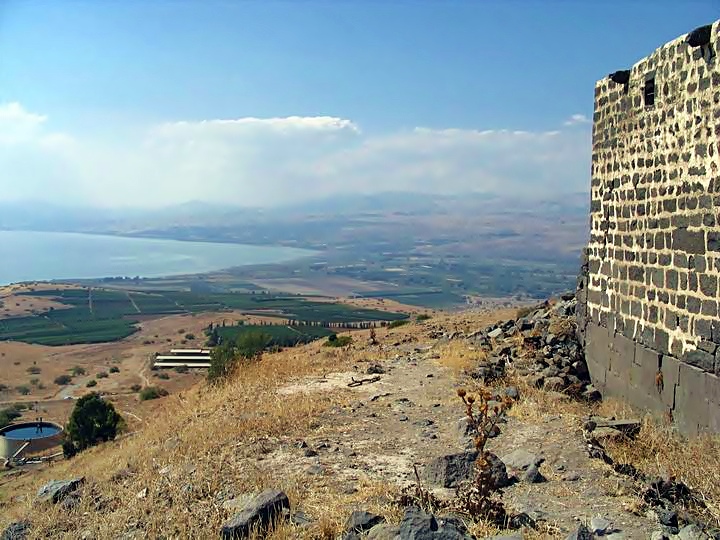 Another view of the main stone house. This house is 12M x 15M x 4M, and is from a later period. The door and the bottom side of the wall, as well as the floor outside, is from the original synagogue. 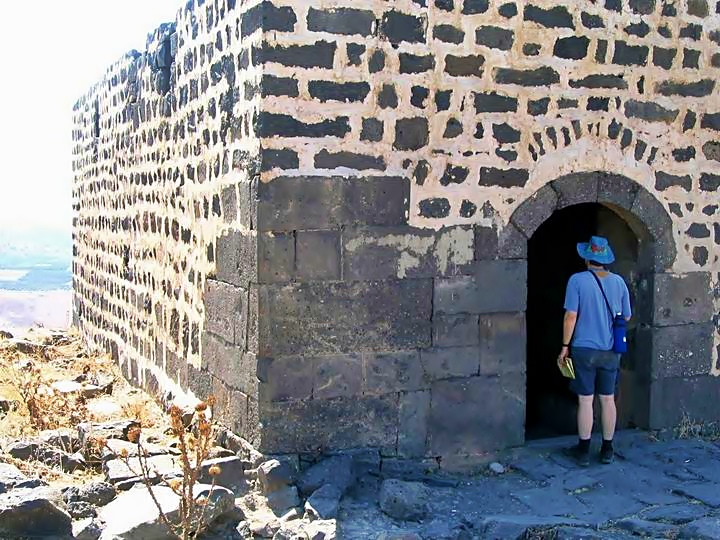 This is the insides of the house, built on top of arches. You can see that under the floor there is an older layer from the Synagogue. 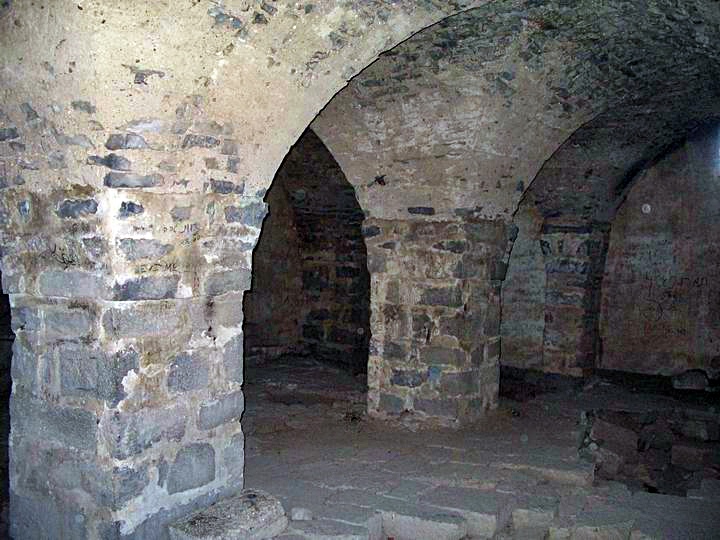 Pieces of the large decorated stones can be seen around the large stone house, which are parts of the Late Roman synagogue. 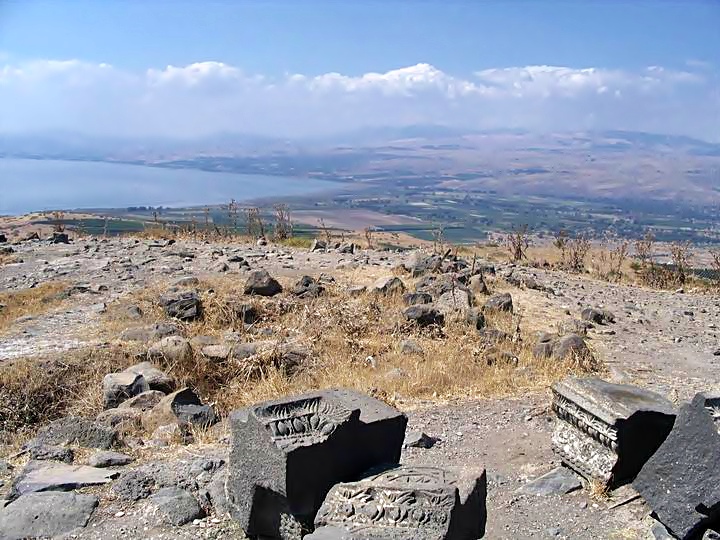 A closer look at these beautifully carved stones. One of the stones is of a shape of Octagon Magen David, which may have been the decorated Mezuza. 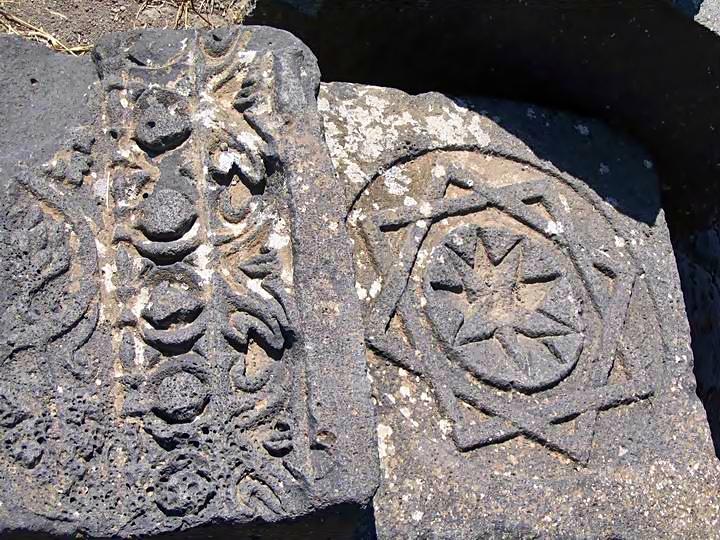 One of the fragments of the stone with an inscription in Aramic-Hebrew, which blesses the memory of the builder of the Synagogue. The other pieces are now displayed in the Rockefeller Archaeological Museum in Jerusalem. The  whole text reads:  “[Blessed] the good memory of Jose son of Khalfo son of Han[an]”. 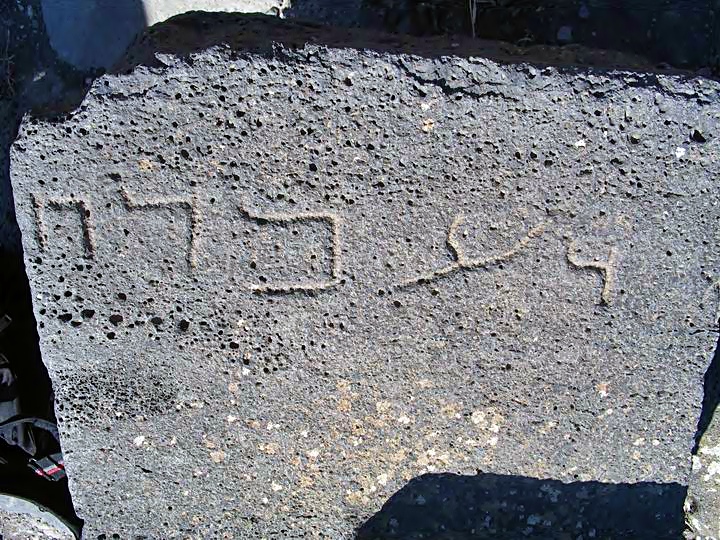 This is the road that leads into the village. It is probably the original Roman road. 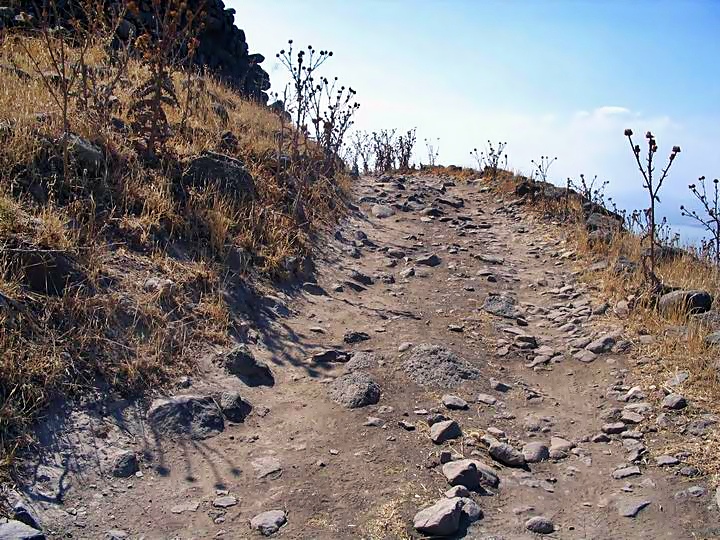 This is one of the house in the ruined village. Some of the stone structures were the original Roman structures. 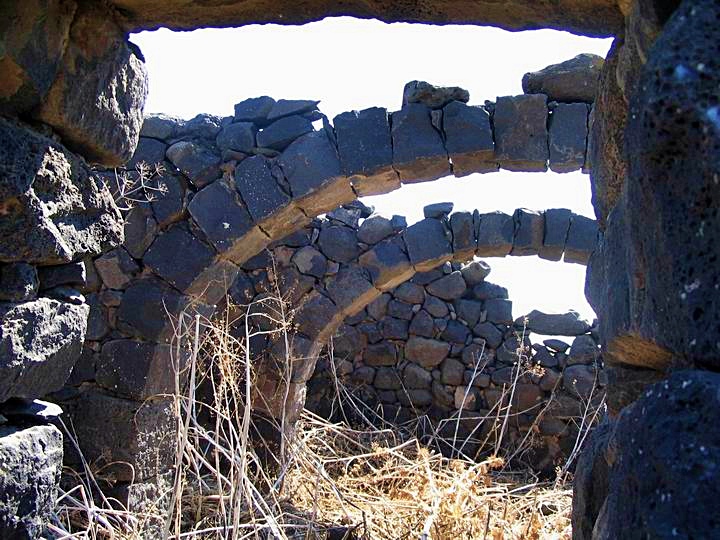 A view towards north-east shows the ruins of the village. On this edge of the village were the agriculture facilities, such as stone wine presses and stone flour grinders, which parts of them can be found among the ruins.

On the right background is the new village of Kanaf. 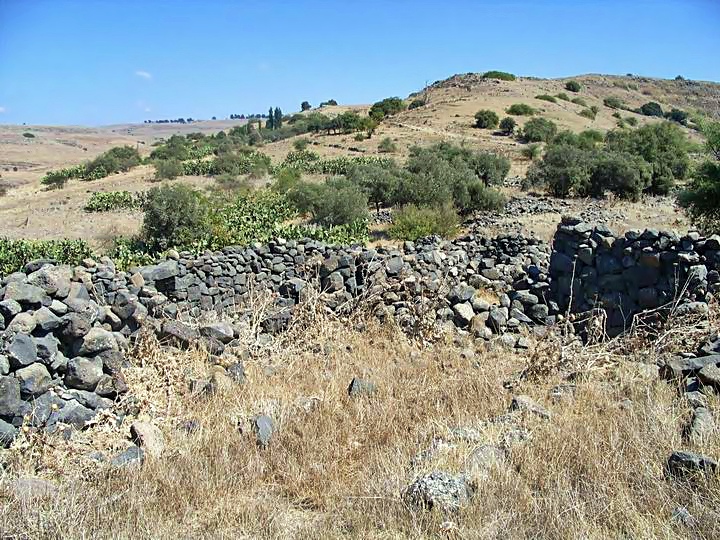 There are many cactus fences in the village and on the sides of the road. During the end of the summer you can pick their sweet fruits (Sabre)- but beware of these tiny thorns. 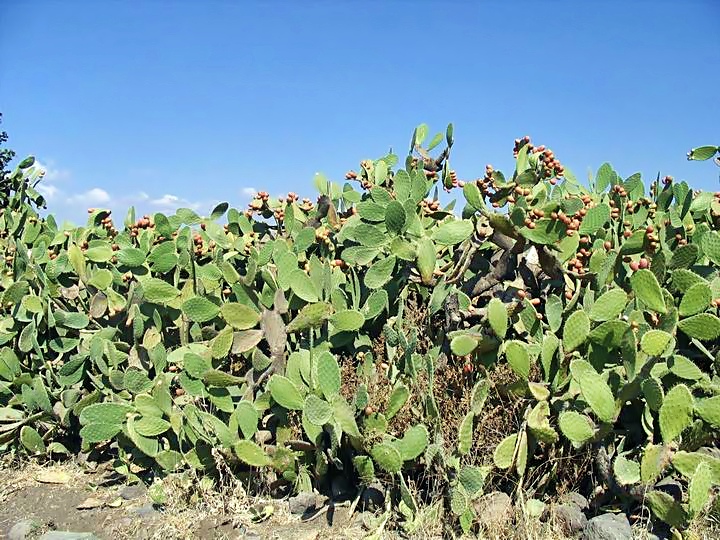 In the valley on the south side, leading from the new village of Ramot, is the path of a Roman road. In this section no traces were left, but if you follow it towards east, there are sections left with stone pavements and milestones. This road was the main road that led to Damascus and Syria, and according to some scholars was the main reason the Roman Army fought hard to conquer Gamla, the fortified city several KM to the north. 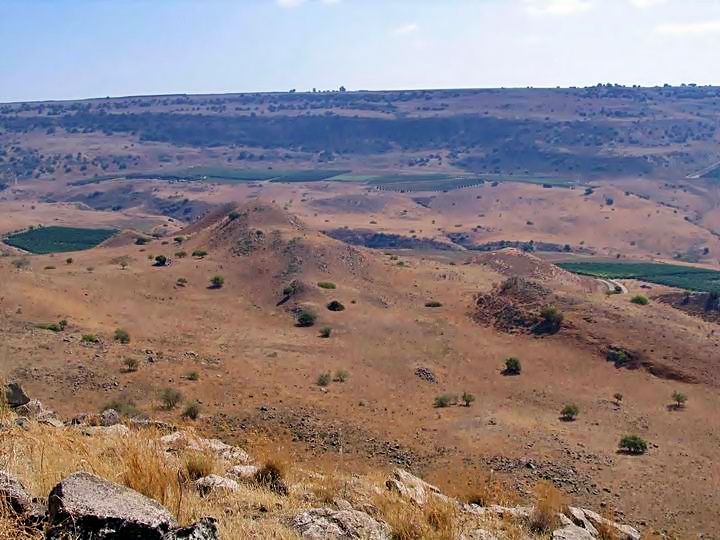 His article was published on  Feb 2  1885 with the title “Discovering an ancient Synagogue”, where he tells his readers about his discovery of Khirbet Kanaf.  A recommended  book for the period of rediscovering the Holy Land.