A huge megalithic monument, arranged in a crescent form, on a hillside above Kibbutz Parod.

Jethro’s Cairn (Gal Ithro, Rujum en-Nabi Shu’ayb) is an ancient stone heap located on a hillside above Kibbutz Parod, near the boundary of Upper and Lower Galilee.

This aerial map indicates the major points of interest around the site. The ruins are located on a hillside, within a forest above highway #866. 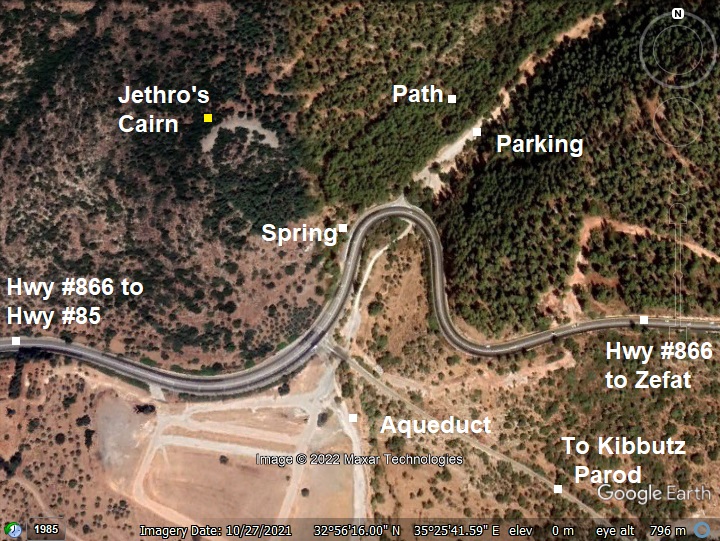 Archeological excavations, headed by Ido Vachtel of the Hebrew University of. Jerusalem, dated its construction to Early Bronze II period (2900-2600 BC).

Biblical Jethro was Moses’ father-in-law. He was initially named “Reuel” (Exodus 2:18), and also named Hobab (Numbers 10:29). Jethro was a Kenite shepherd and priest of Midian. According to the Quran, a prophet named Shu’ayb (Arabic for : meaning: “who shows the right path”) was an important Medianite prophet (named 11 times in the Holy Quran). The Druze regard Shu’yab (also: Shu’eb) as an important figure in their faith, and identify this prophet Shu’ayb with Biblical Jethro. They hold an annual pilgrimage to Nabi Shu’yab, the location of his tomb according to their tradition, in the foothills of Horns of Hattin.

According to Druze tradition, prophet Shu’ayb came to the Galilee and wanted to build a house in this location, and started to accumulate stones. After finding a body of a pig at the spring below the site, he abandoned the construction and moved to the Horns of Hattin where his grave is located according to Druze faith.  Their association of the megalithic monument with the prophet gave it the name: Rujum en-Nabi Shu’ayb, Arabic for: “Stone heap of the prophet Shu’ayb”.  During the annual pilgrimage people of Druze faith gathered here when they were not able to travel to the grave location.

The area was surveyed in the PEF survey (1866-1877) by Wilson, Conder and Kitchener. They did not provide details on the site. On the map is a place named Ras en Neb’a – meaning (Arabic): “The head of the perennial spring”. The spring flows on the hillside below the site, and its waters were conveyed via an aqueduct to the Mills indicated on the map on the north west side of Ferradieh village.

A section of their map is shown here. 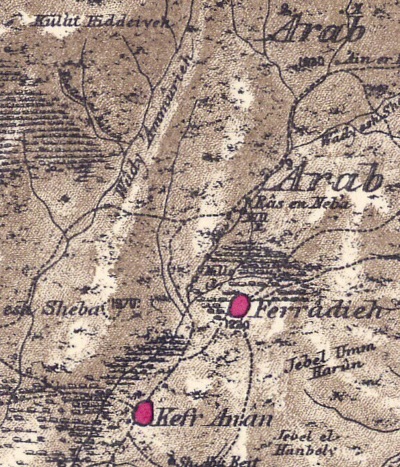 The site is in open public area, within a KKL planted forest. Access to the wall is via the forest, starting from the valley of Nahal Parod.

On this aerial view of the area looking to the south, the white stone wall is seen within the forest on the foothills above the highway. On the bottom left corner is the Parod spring. Khirbet Beer Sheba  is viewed on the left background. 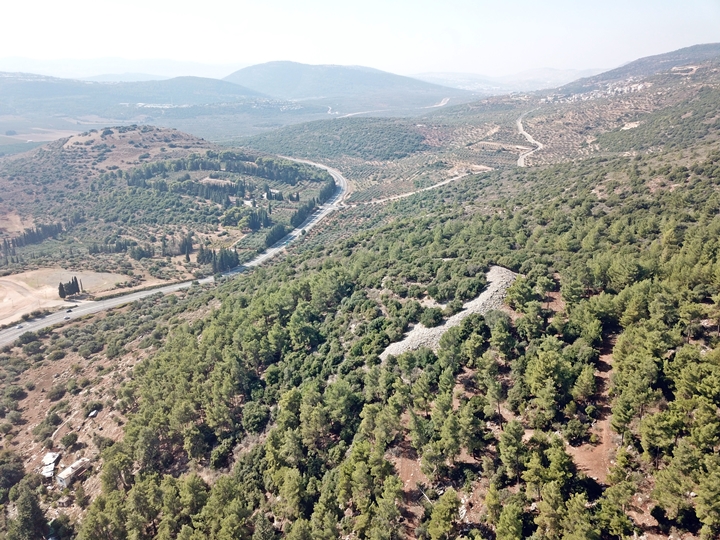 This giant size megalithic monument is arranged in a crescent form. It is 150m long and consists of 14,000 cubic meters of medium size field stones. 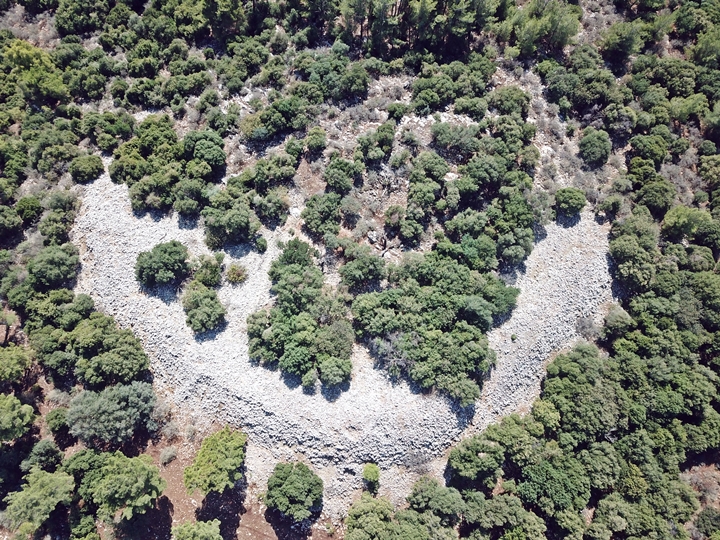 According to  the archaeologist who researched the site, an estimate of the effort of building the monument took an entire year by 100 men. 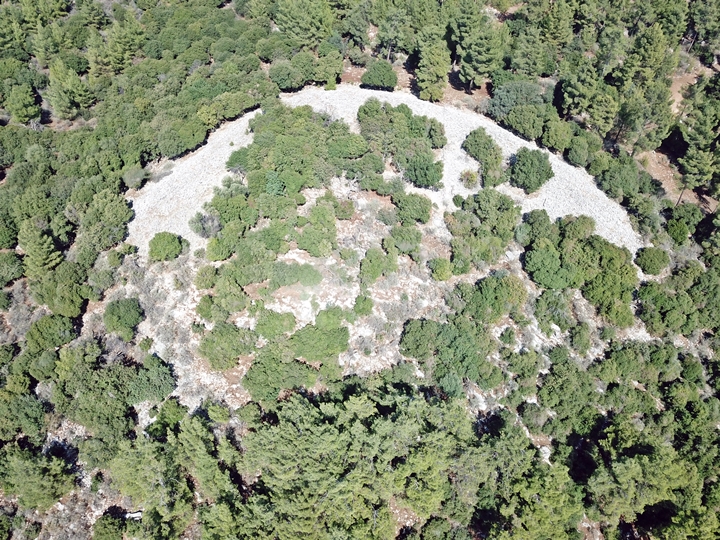 People of Druze faith associate the heap with Jethro, and make yearly pilgrimages to the site.

Its purpose is still a mystery, as no known Early Bronze settlement existed near the heap, and the heap was not a defense wall. Its shape may imply lunar worship, although other theories were suggested. 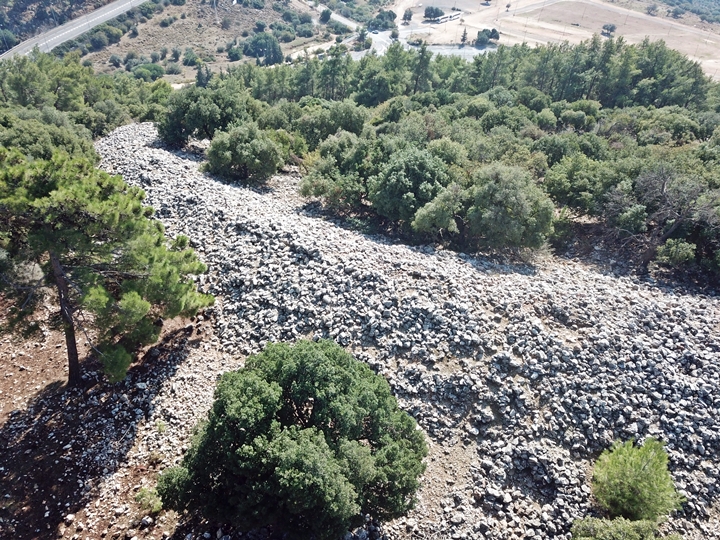 Our team of 3 – Jacob, Tuvia and Yoram – hiked to the site following our 50th year reunion of the class of ’72. We always loved to travel the country, and here we walked down the memory lane to a site 5,000 years older.

We left the car near the parking area, and walked up the white-and-blue hiking trail among the tall pine trees. Soon enough the trail was blocked by a fence, so we had to find our way thru the bush. 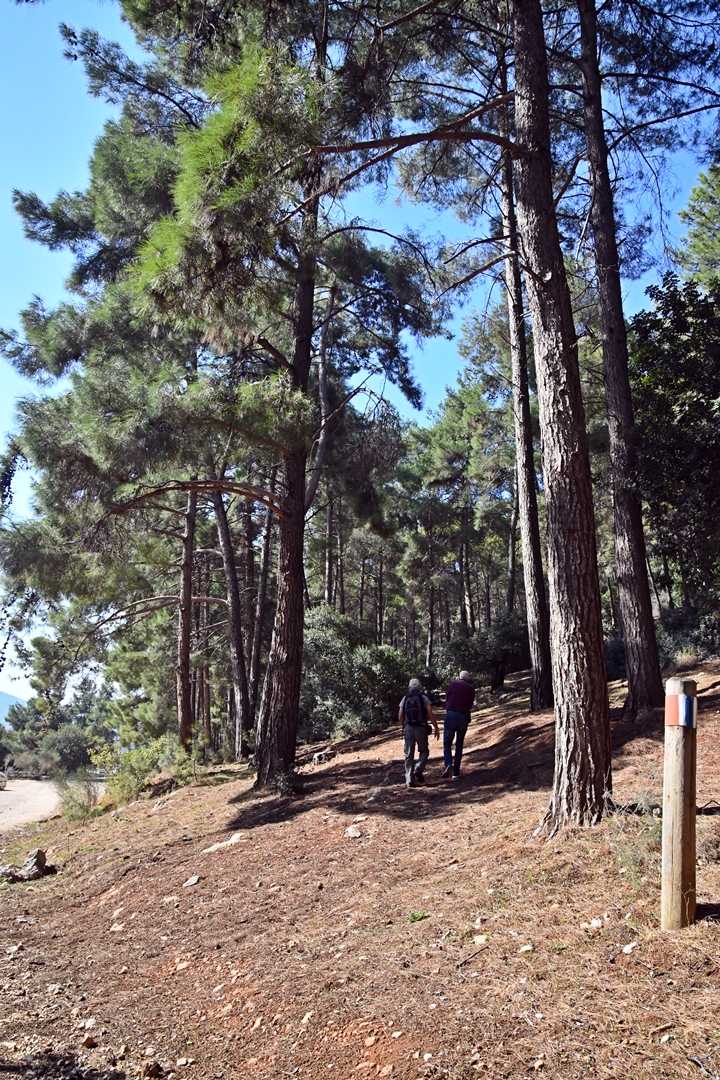 Uphill is a cave, with a section of a built wall in its entrance. A huge wild boar was alarmed by our arrival, and buzzed off away. 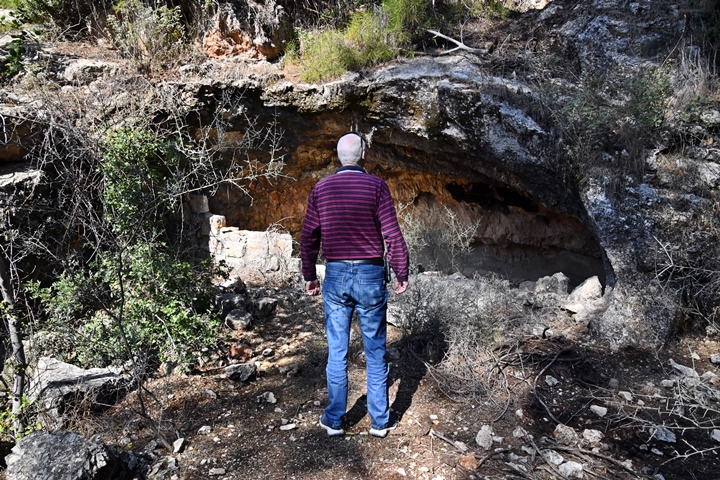 On the back of the cave there is, what seems like, a small cross engraved into the wall. Perhaps this cave was once used for seclusion by a monk. Today it is the home of the wild boar. 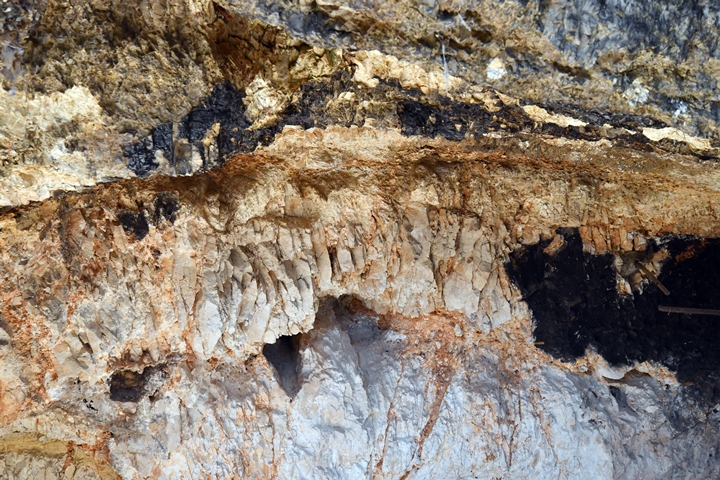 The heap is surrounded by modern planted pine trees. Remains of ancient trees in its vicinity imply that it was a sacred area. 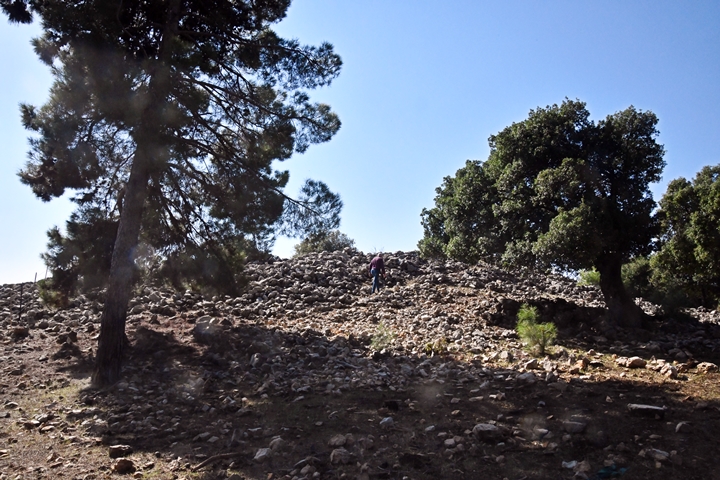 The wall stretches along 150m and consists of 14,000 cubic meters of medium size field stones. 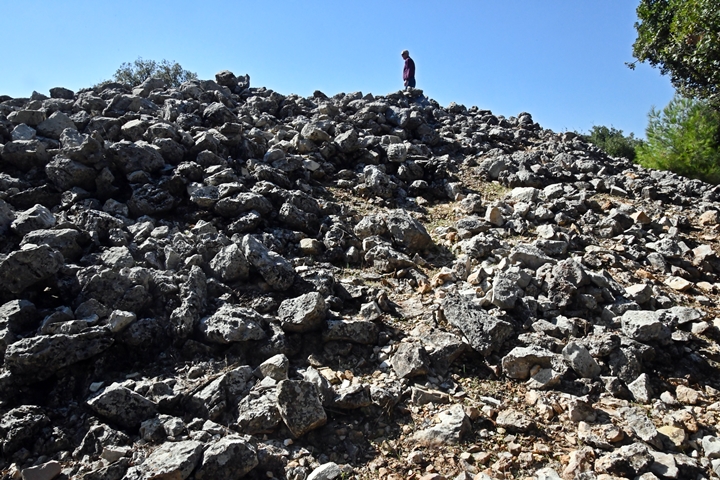 At its center the heap is 20m wide, 4.7m high above the surroundings and 7m above the foundation. 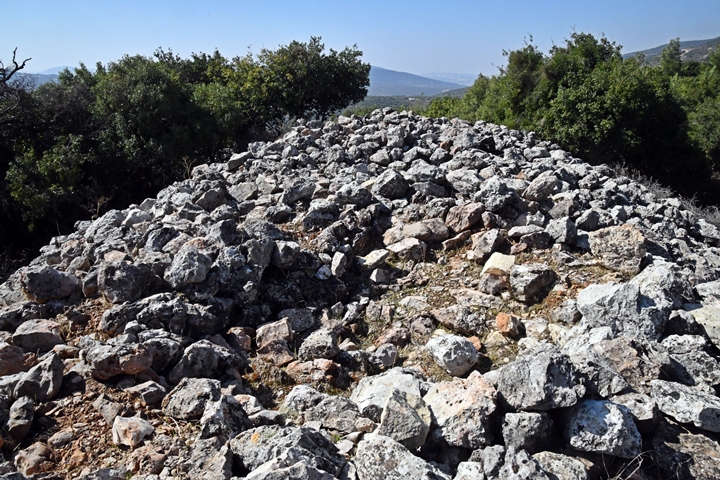 In some sections, such as seen below, the rocks are pushed aside and forming a round cavity. 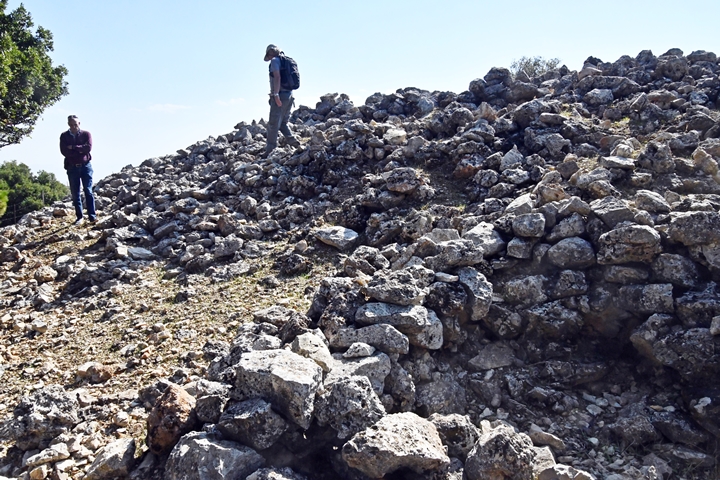 Another view of the top of the wall is  in the next photo, with a direction towards the east. 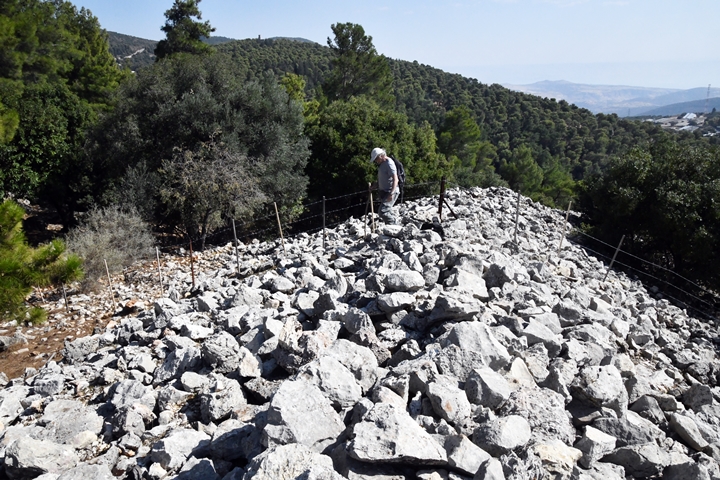 (d) Center of the arc

The wall is arranged in a crescent form. So it was interesting to find what lies in the center of the arc below the wall. 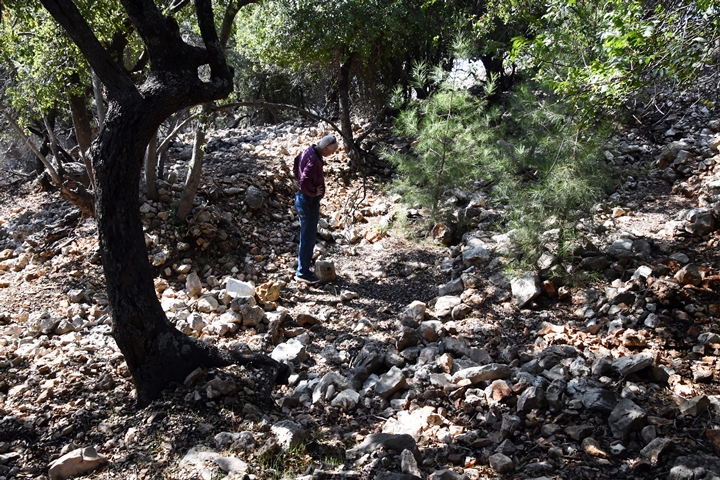 The area is covered by bush and trees, and rocks that probably fell from the wall.

One of the rocks had a modern painted text in Hebrew (“עבלס”) and script English letters (“ABLS”). What does this mean?? 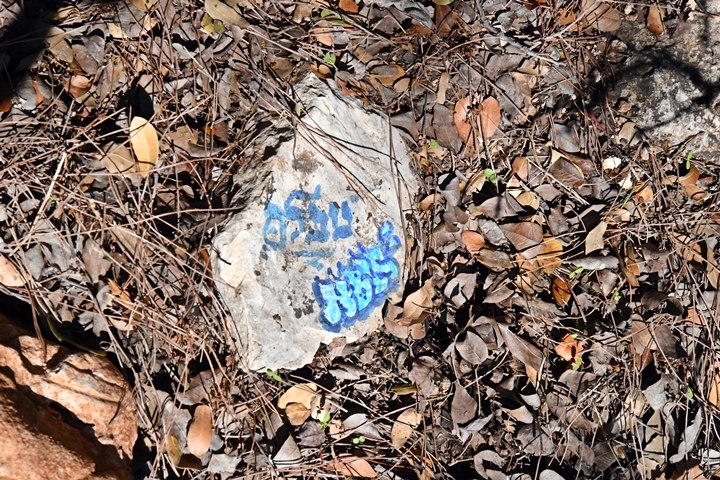 On a section of the east side of the wall the stones are nicely stacked in steps. This is probably how the original wall was constructed. 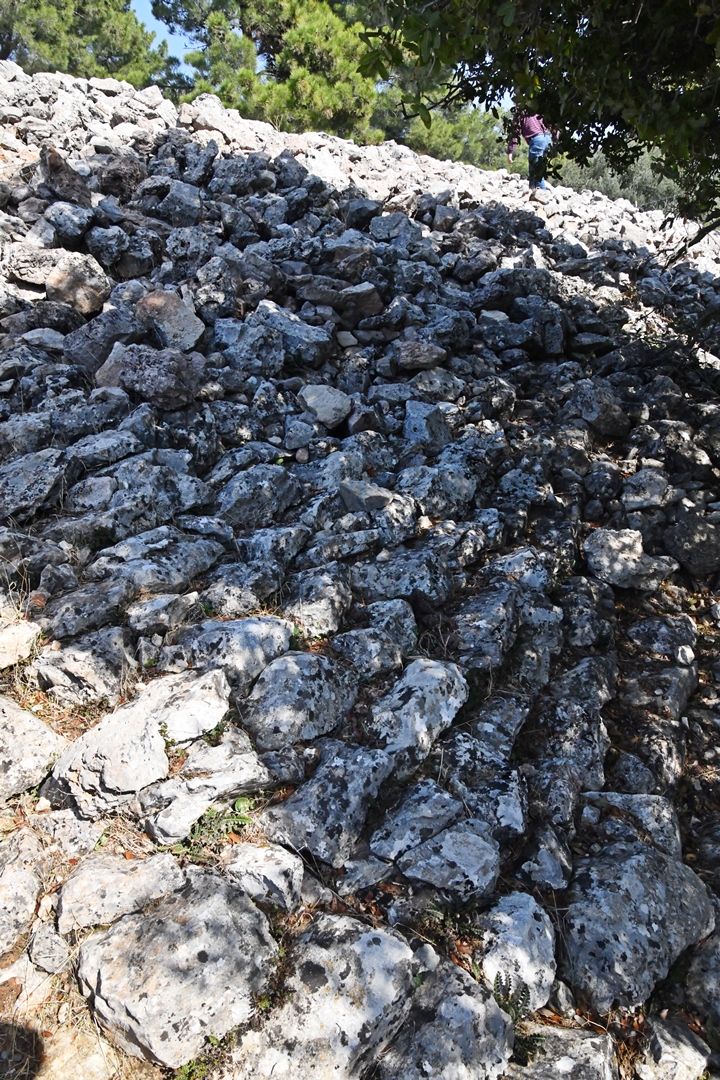 Pottery excavated at the site dates the construction of the wall to the Early Bronze Age II, between 3050 BCE and 2650 BCE.

A fragment we found in the center area below the wall is probably from a later period. 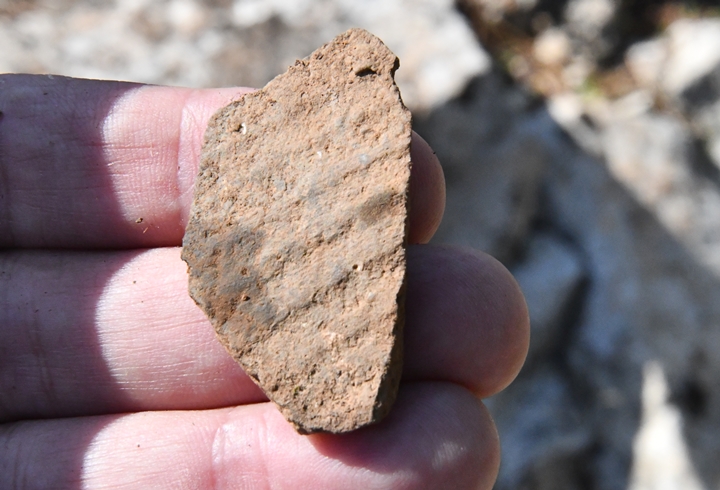 At the foothill of the Megalithic monument is a perennial spring. It is named Ras en Neb’a (Arabic: “The head of the perennial spring”) or Parod spring on modern maps (named after the nearby community). The spring flows on the hillside below the site, and its waters were conveyed via an aqueduct to the Mills on the north west side of the ruined Ferradieh village. 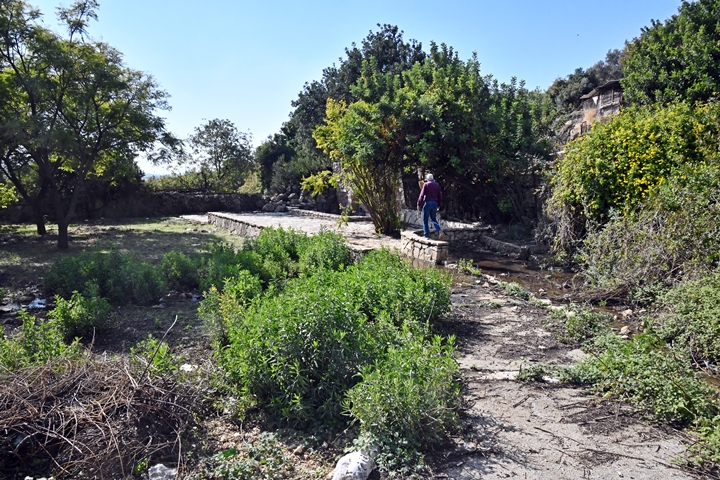 On the wall are engraved stones with a Biblical verse in Hebrew  (“הוי כל צמא לכו למים”) and Latin (“Omnes sitientes Venite ad aquas”) from Isaiah 55:1: “Ho, every one that thirsteth, come ye to the waters”. 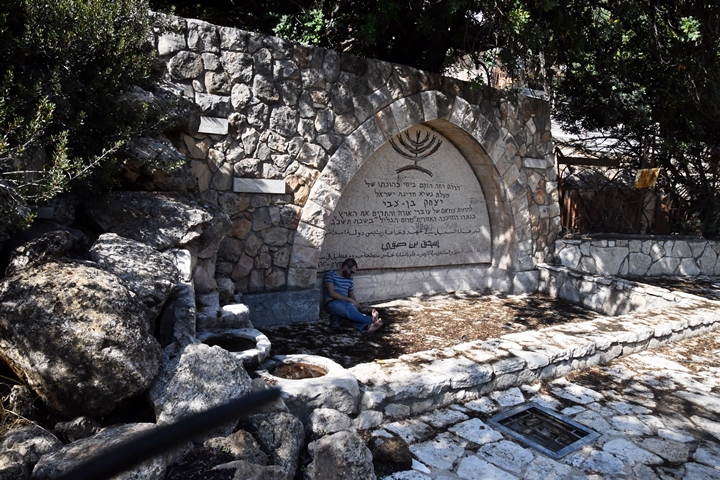 (g) Flight over the site: