A 1st century AD fishing boat was found on the shore of the sea of Galilee, which may be from Jesus times, or the Jewish revolt. It is displayed in a museum in Kibbutz Ginnosar.

This Roman boat was discovered by accident in the winter of 1986, after a dry season when the lake was very low.  It was found on the muddy shores of the sea of Galilee between Ginnosar and Magdala. After 12 days of excavations on site it was transferred, and now exhibited in a special museum.

The museum that exhibits the “boat of Jesus” is in the Yigal Allon center in Kibbutz Ginnosar. You can stop here on the way from Tiberias to Capernaum, for an half hour.

The restored boat is displayed in a special museum in Kibbutz Ginnosar, north of Magdala.  The boat is 9M long, 2.5M wide, 1.25M high. 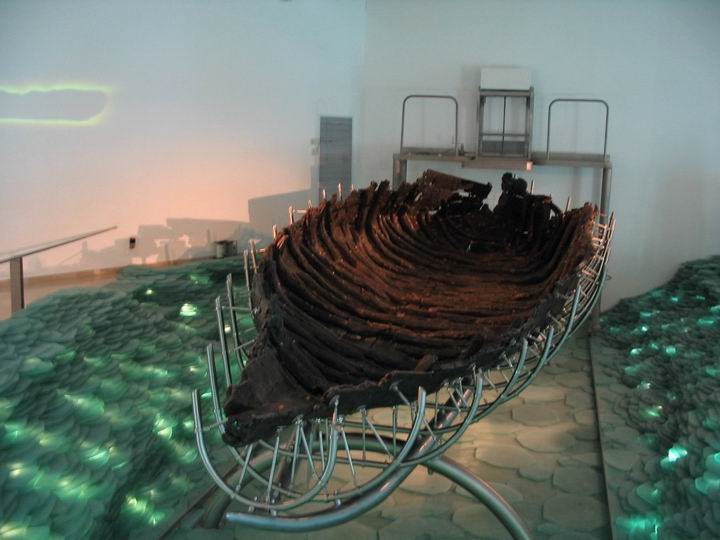 It is made of 14 different types of wood, as seen in the chart behind the boat. It may have functioned as a ferry, reused as a military ship (such as described in the battle of Magdala), or used by the fishermen. 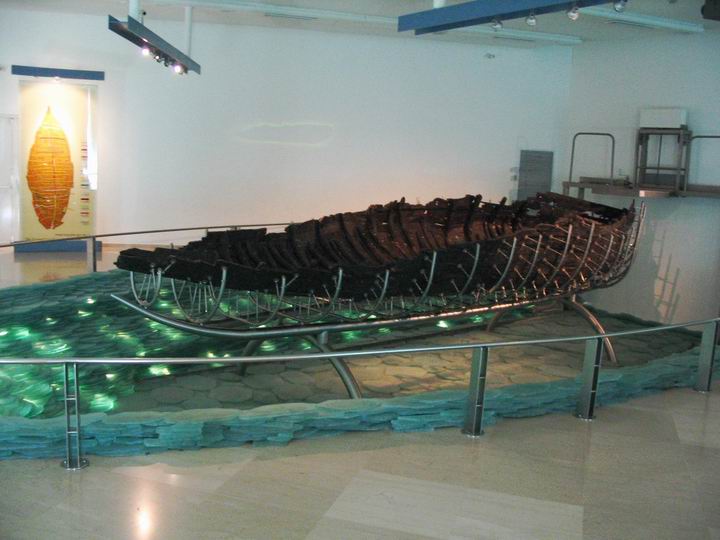 The boat was dated to the 1st century AD, the times of Jesus and the Jewish Revolt against the Romans. To date the boat, Carbon 14 tests were made. Additional dating information came from the artifacts that were found in the boat (shown below): cooking pot, arrow head, nails, hooks and oil lamp. 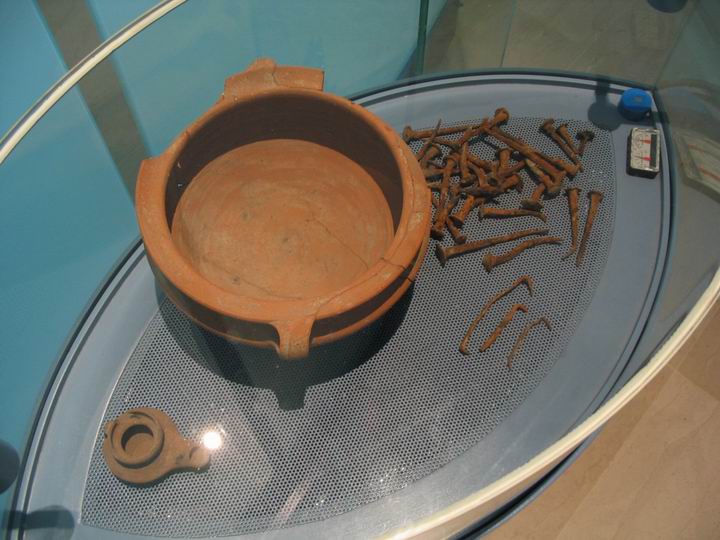 A boat sailing near the museum brings the story of the boat back to life. 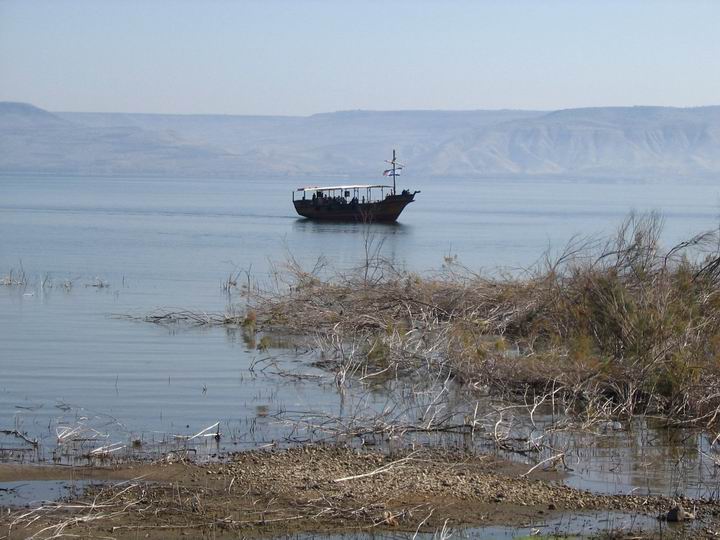 There are several references to the sailing of Jesus in the sea of Galilee. Was this one of the boats?

This text is part of the miracle of the first feeding of the multitude:

When Jesus heard of it, he departed thence by ship into a desert place apart.

“And when he was entered into a ship, his disciples followed him.  And, behold, there arose a great tempest in the sea, insomuch that the ship was covered with the waves: but he was asleep. And his disciples came to him, and awoke him, saying, Lord, save us: we perish”. 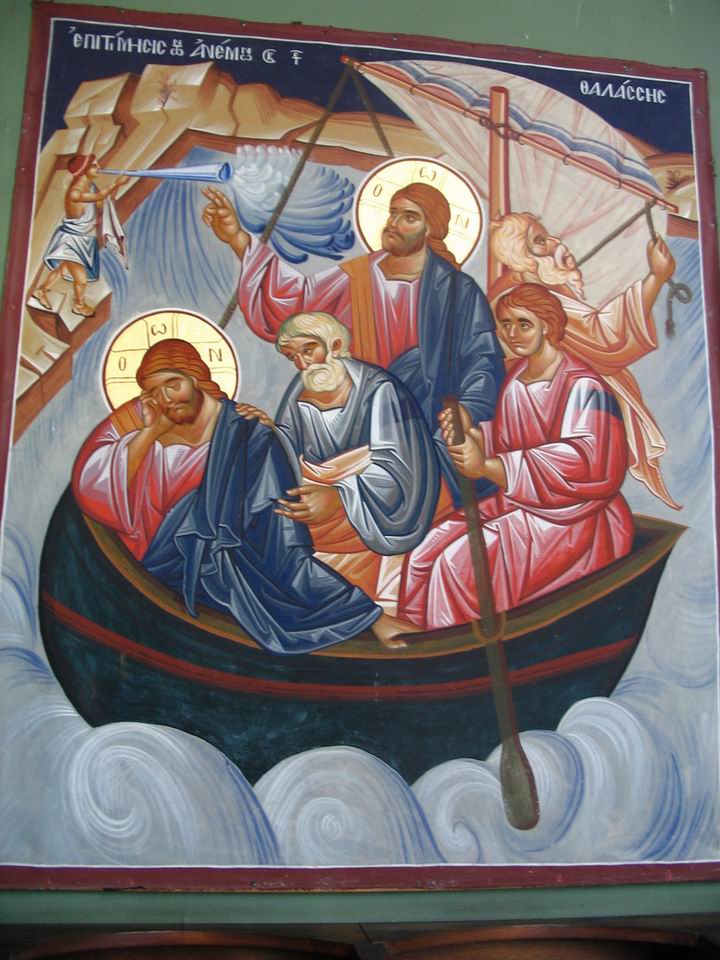 Miracle of the storm – painting in the Orthodox church in Capernaum

” And the same day, when the even was come, he saith unto them, Let us pass over unto the other side.
And when they had sent away the multitude, they took him even as he was in the ship. And there were also with him other little ships”

This text talks about the use of a dragnet to catch fish:

“Again, the kingdom of heaven is like unto a net, that was cast into the sea, and gathered of every kind:
Which, when it was full, they drew to shore, and sat down, and gathered the good into vessels, but cast the bad away”.

Josephus, the Commander of the Jewish revolt against the Romans, and later a historian of the period. He writes that he fortified the city of Tarichess (or, Magdala).  Later he describes the bloody war in Magdala, the slaughter of its defenders by Titus and his father Vespesian, in 67AD. After the city was taken, many of its fishermen fled by boats, but the Romans chased them in the lake. Is the boat one of those that escaped from Magdala, or one of the boats used by the Romans?

6. “Hereupon Titus sent one of his horsemen to his father, and let him know the good news of what he had done; at which, as was natural, he was very joyful, both on account of the courage and glorious actions of his son; for he thought that now the greatest part of the war was over. He then came thither himself, and set men to guard the city, and gave them command to take care that nobody got privately out of it, but to kill such as attempted so to do. And on the next day he went down to the lake, and commanded that vessels should be fitted up, in order to pursue those that had escaped in the ships. These vessels were quickly gotten ready accordingly, because there was great plenty of materials, and a great number of artificers also.

7. Now this lake of Gennesareth is so called from the country adjoining to it. Its breadth is forty furlongs, and its length one hundred and forty; its waters are sweet, and very agreeable for drinking, for they are finer than the thick waters of other fens; the lake is also pure, and on every side ends directly at the shores, and at the sand; it is also of a temperate nature when you draw it up, and of a more gentle nature than river or fountain water, and yet always cooler than one could expect in so diffuse a place as this is. Now when this water is kept in the open air, it is as cold as that snow which the country people are accustomed to make by night in summer. There are several kinds of fish in it, different both to the taste and the sight from those elsewhere. It is divided into two parts by the river Jordan. Now Panium is thought to be the fountain of Jordan, but in reality it is carried thither after an occult manner from the place called Phiala: this place lies as you go up to Trachonitis, and is a hundred and twenty furlongs from Cesarea, and is not far out of the road on the right hand; and indeed it hath its name of Phiala [vial or bowl] very justly, from the roundness of its circumference, as being round like a wheel; its water continues always up to its edges, without either sinking or running over. And as this origin of Jordan was formerly not known, it was discovered so to be when Philip was tetrarch of Trachonitis; for he had chaff thrown into Phiala, and it was found at Paninto, where the ancients thought the fountain-head of the river was, whither it had been therefore carried [by the waters]. As for Panium itself, its natural beauty had been improved by the royal liberality of Agrippa, and adorned at his expenses. Now Jordan’s visible stream arises from this cavern, and divides the marshes and fens of the lake Semechonitis; when it hath run another hundred and twenty furlongs, it first passes by the city Julias, and then passes through the middle of the lake Gennesareth; after which it runs a long way over a desert, and then makes its exit into the lake Asphaltitis.

8. The country also that lies over against this lake hath the same name of Gennesareth; its nature is wonderful as well as its beauty; its soil is so fruitful that all sorts of trees can grow upon it, and the inhabitants accordingly plant all sorts of trees there; for the temper of the air is so well mixed, that it agrees very well with those several sorts, particularly walnuts, which require the coldest air, flourish there in vast plenty; there are palm trees also, which grow best in hot air; fig trees also and olives grow near them, which yet require an air that is more temperate. One may call this place the ambition of nature, where it forces those plants that are naturally enemies to one another to agree together; it is a happy contention of the seasons, as if every one of them laid claim to this country; for it not only nourishes different sorts of autumnal fruit beyond men’s expectation, but preserves them a great while; it supplies men with the principal fruits, with grapes and figs continually, during ten months of the year (8) and the rest of the fruits as they become ripe together through the whole year; for besides the good temperature of the air, it is also watered from a most fertile fountain. The people of the country call it Capharnaum. Some have thought it to be a vein of the Nile, because it produces the Coracin fish as well as that lake does which is near to Alexandria. The length of this country extends itself along the banks of this lake that bears the same name for thirty furlongs, and is in breadth twenty, And this is the nature of that place.

9. But now, when the vessels were gotten ready, Vespasian put upon ship-board as many of his forces as he thought sufficient to be too hard for those that were upon the lake, and set sail after them. Now these which were driven into the lake could neither fly to the land, where all was in their enemies’ hand, and in war against them; nor could they fight upon the level by sea, for their ships were small and fitted only for piracy; they were too weak to fight with Vespasian’s vessels, and the mariners that were in them were so few, that they were afraid to come near the Romans, who attacked them in great numbers. However, as they sailed round about the vessels, and sometimes as they came near them, they threw stones at the Romans when they were a good way off, or came closer and fought them; yet did they receive the greatest harm themselves in both cases. As for the stones they threw at the Romans, they only made a sound one after another, for they threw them against such as were in their armor, while the Roman darts could reach the Jews themselves; and when they ventured to come near the Romans, they became sufferers themselves before they could do any harm to the ether, and were drowned, they and their ships together. As for those that endeavored to come to an actual fight, the Romans ran many of them through with their long poles. Sometimes the Romans leaped into their ships, with swords in their hands, and slew them; but when some of them met the vessels, the Romans caught them by the middle, and destroyed at once their ships and themselves who were taken in them. And for such as were drowning in the sea, if they lifted their heads up above the water, they were either killed by darts, or caught by the vessels; but if, in the desperate case they were in, they attempted to swim to their enemies, the Romans cut off either their heads or their hands; and indeed they were destroyed after various manners every where, till the rest being put to flight, were forced to get upon the land, while the vessels encompassed them about [on the sea]: but as many of these were repulsed when they were getting ashore, they were killed by the darts upon the lake; and the Romans leaped out of their vessels, and destroyed a great many more upon the land: one might then see the lake all bloody, and full of dead bodies, for not one of them escaped. And a terrible stink, and a very sad sight there was on the following days over that country; for as for the shores, they were full of shipwrecks, and of dead bodies all swelled; and as the dead bodies were inflamed by the sun, and putrefied, they corrupted the air, insomuch that the misery was not only the object of commiseration to the Jews, but to those that hated them, and had been the authors of that misery. This was the upshot of the sea-fight. The number of the slain, including those that were killed in the city before, was six thousand and five hundred. “

This page was last updated on Feb 16, 2017 (Added link, corrected name of museum)