Amazing Light & Sound show held in June 2014 in the old city of Jerusalem. 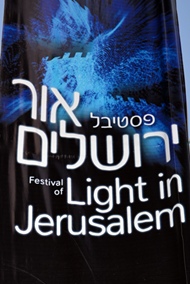 This web page shows a gallery of photos from the amazing light & sound show in the old city of Jerusalem, held in June 11-19 2014.

This is the 6th year the city is producing the event, this time with 27 international performances and installations, which  were seen along four self-guided routes.

The yearly festival of light is an event you should not miss. Make sure you schedule your visit to the city during this spectacular show.

Plan of the light show:

The following photos are only a sample of the spectacular light show around the walls of the old city, and inside the the Armenian and Jewish quarters.  There were four routes through the presentations, marked by light pipes which were stretched along the streets:

The center of the show, and the origin of the tours, was from the Jaffa gate plaza, just outside of the old city. This large art installation, composed of thousands of colorful LED lights, is an Italian design. 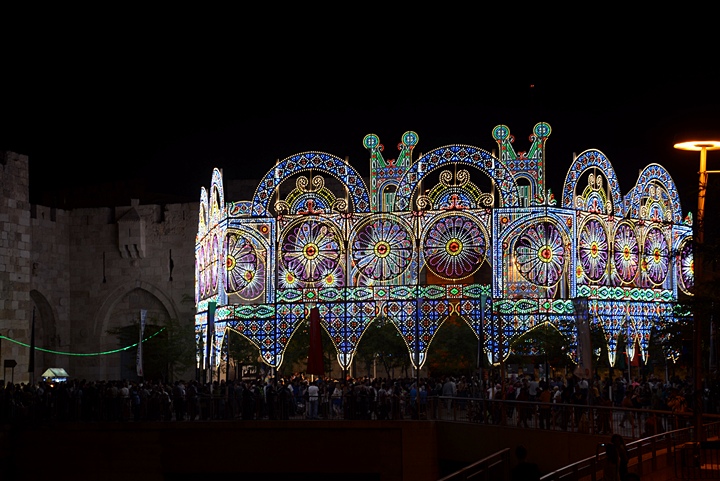 On the south side are twin high towers, which open to a garden of lights. 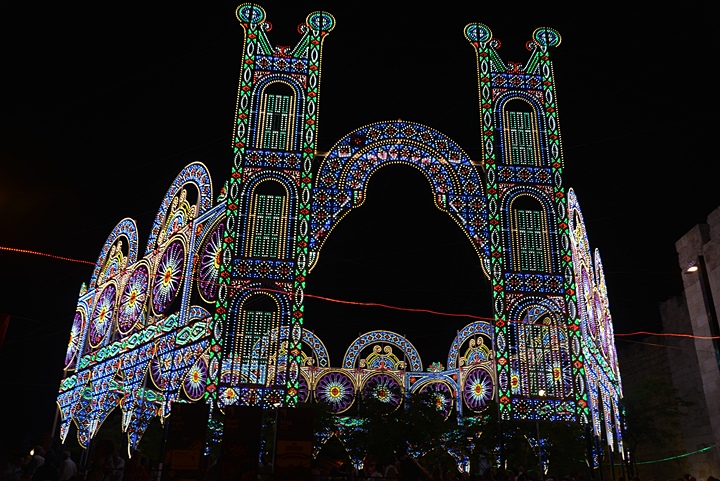 The blue route started from the tower of David, passed thru St. Mark street towards the Muristan and the Redeemer church, Then through the Jewish quarter road and ending in the broad wall.

An animation of one of the sections along the blue route is seen here, one of many light displays in the show.

Below, is a scene from a mythological show  which was conducted in the grand fountain of the Muristan.    This oriental style show was played by two Israeli actors, dressed as giant lighted dolls.  It was created and played by actors of the Israeli Mystorin group, which is based in Jerusalem. 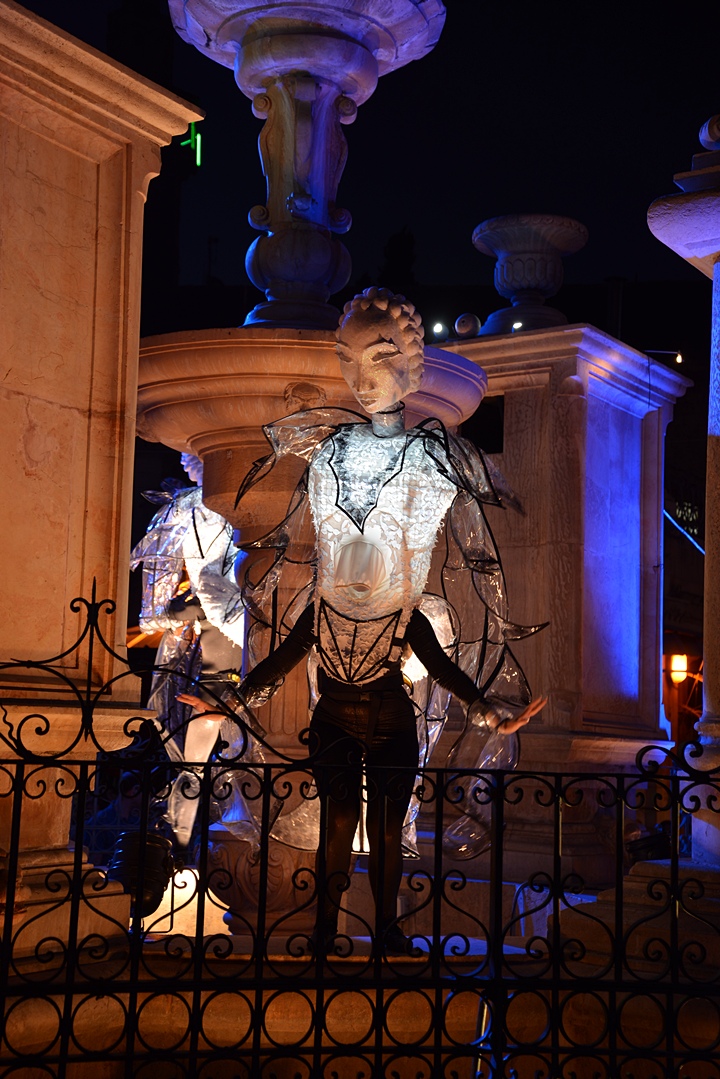 The fountain, which was illuminated by colorful lights, was the center of the theme of this audio-visual show.  It was an enchanted pond, with a palace in its depths. Inside the palace lived fantastic water creatures who sing sirens. 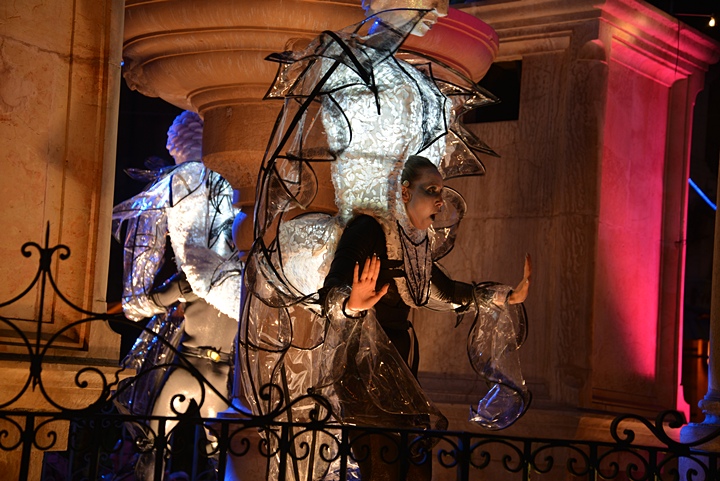 This was one of the best live presentations in the festival. 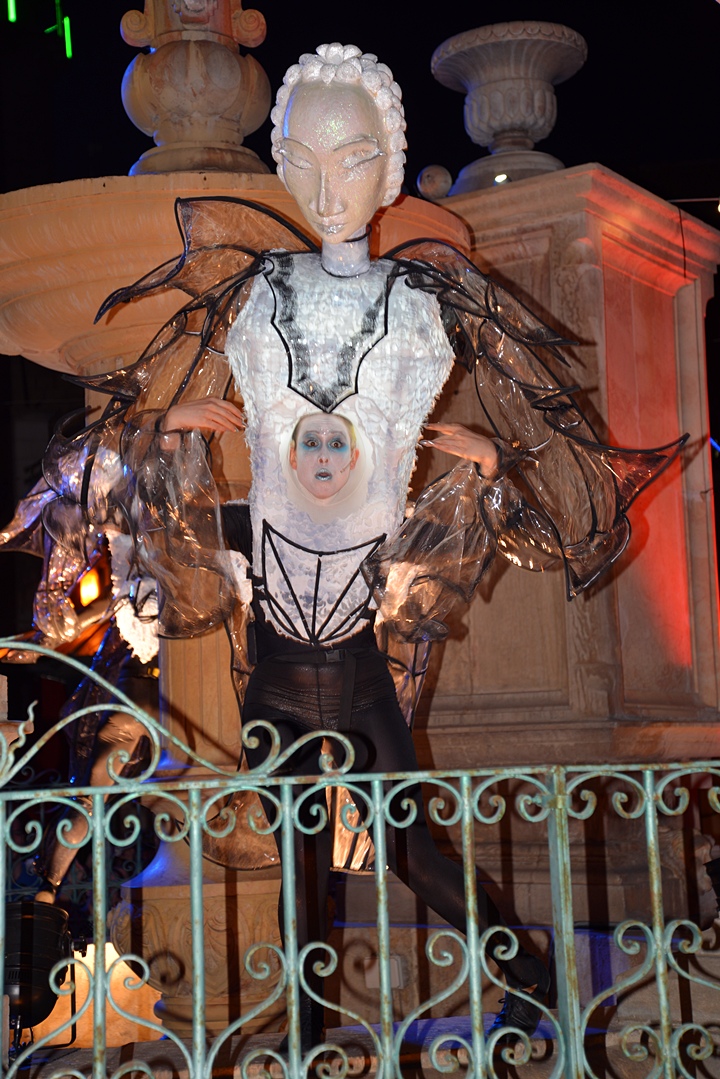 The Redeemer church, located near the fountain, was dressed with lights and illuminated with colorful lights.  It was designed by Sarit Mor of Israel. 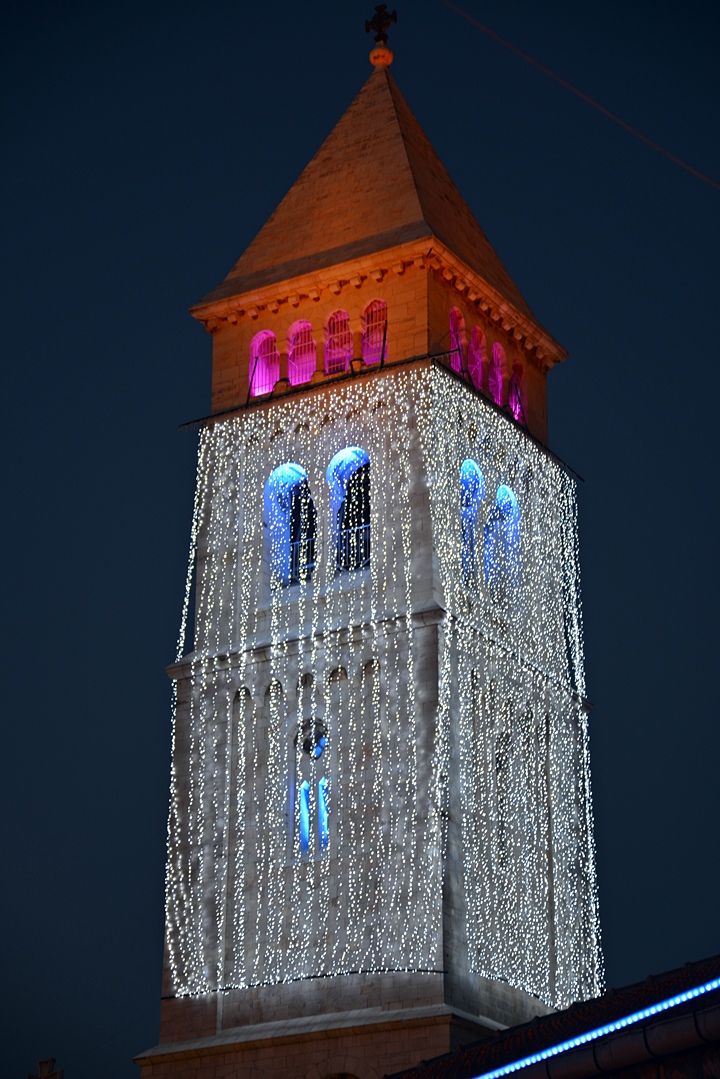 In front of the Hurbah Synagogue was a giant illuminated statue of a tower of cards. The icons on the card depicted Biblical figures. This work was created by Jean David of Israel. 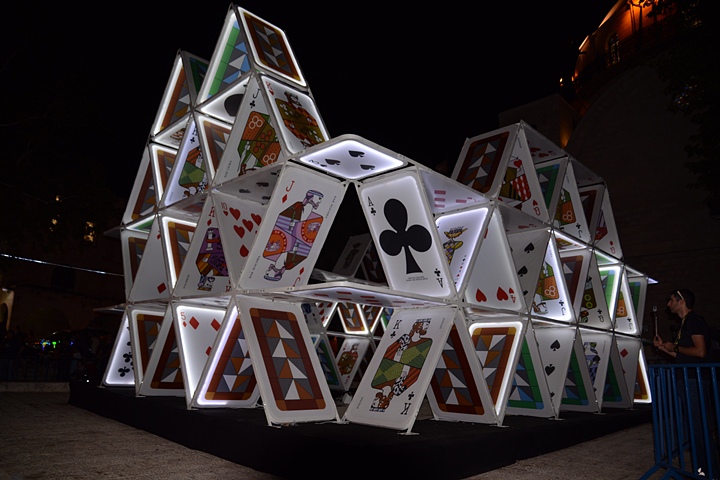 The White route started from the Jaffa gate, continued through the Armenian Patriarchate road, passed through the Cardo, then joined the blue route in the Jewish quarter.

One of the most remarkable visual effects was a dazzling light presentation which was projected over the Batei Machase historic building in the Jewish quarter. This building, built at the end of the 19th Century, served as a screen for the projection. 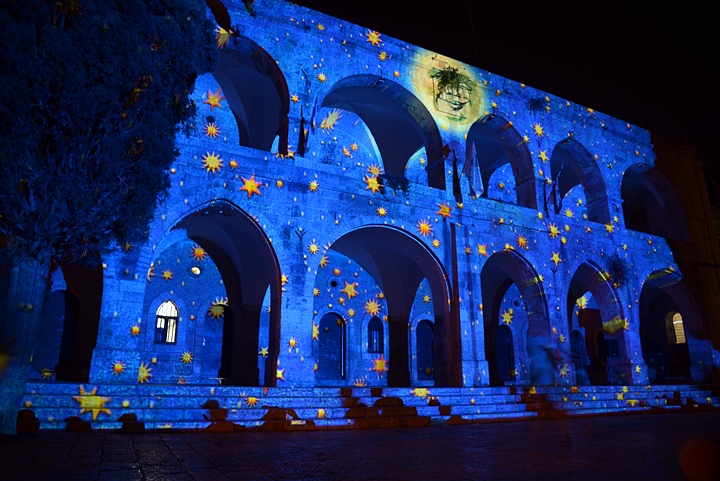 The theme of the presentation was composed by Ocubo of Portugal. It tells the story of a Circus show. The animation below is just a taste of the amazing show.

The Red route connected the Zion gate to the Jaffa Gate, along the external side of the southwestern walls.

At the corner of the south and west walls was an interesting work designed by Daniel Iregui of Canada.

The spectacular interactive light show involved the visitors, with the light patterns changing by the touch of the screen.

The light show includes several types of light patterns, such as the squares below.

Another sight & sound work by Philippe Morvani of France included a central sphere 3m high, 80m of LEDs, and 60 balls of light.

Along the walls the kids tried to come up with their own light shows:

Another work of light and shadow:

The green route connected the Jaffa Gate to the Shechem gate, along the external northwestern walls of the old city.  One of the fascinating performances along the route was the walk of  the illuminated walking human statues. 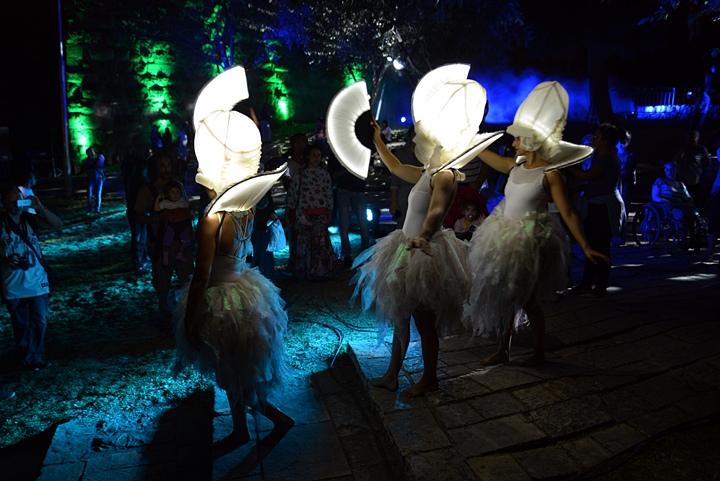 The enchanted walk of the illuminated creatures was accompanied by music, smoke and changing lights.

This remarkable performance was conducted by three performers of  the Israeli group “Pyromania”. 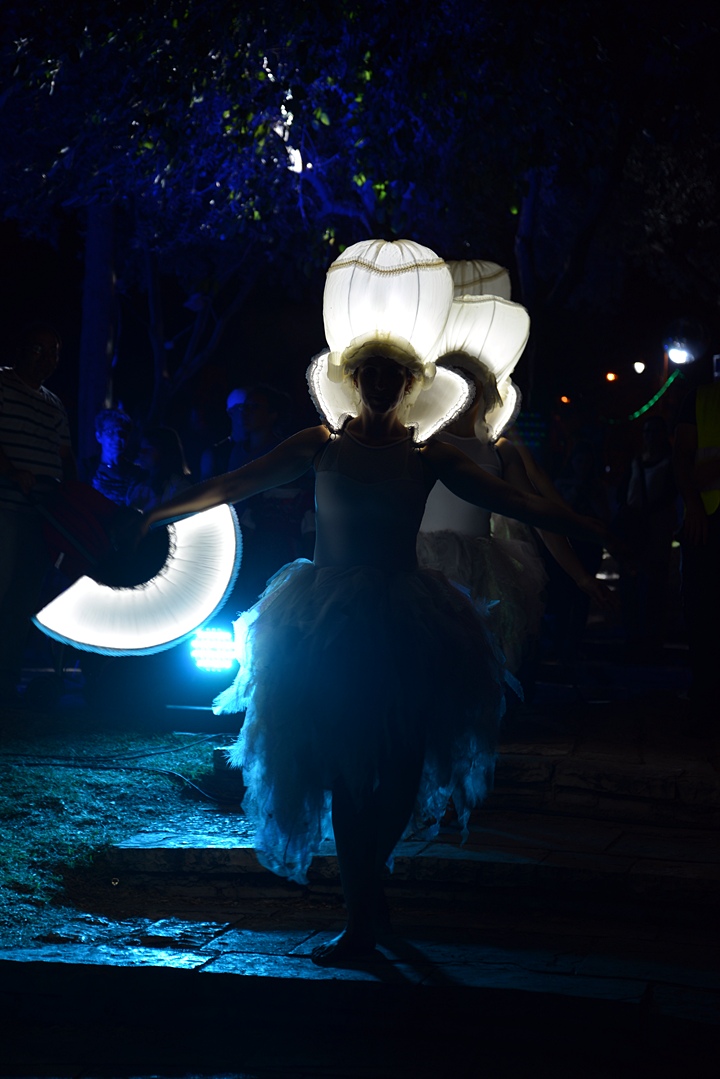 The walls of the city were illuminated by changing lights. This setup, and the electrifying experience from the festival,  encouraged the public to perform their own light dances.  (performing here: Amit, Webmaster Rotem’s sister).

Another remarkable visual effects was a dazzling light presentation which was projected over the historic Damascus (Shechem) gate. The gate, built in 1537, served as a screen for the projection. 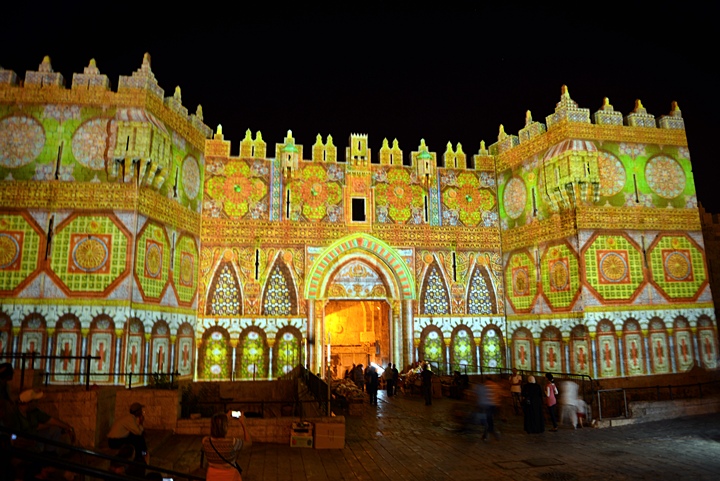 The presentation was designed by the French group of Damien Fontaine.