The historic site of the first rail station in the Holy Land, recently restored and turned into a charming shopping complex.

A train station operated here from 1892 until 1948, connecting Jaffa to Jerusalem. This was the first rail station in the Holy Land. The old station was recently restored the complex and turned into another a charming hot spot in the area of Tel-Aviv. The complex covers an area of 49 acres, with dozens of fashions shops, restaurants, cafes and stores.

The featured sites are marked by yellow squares. 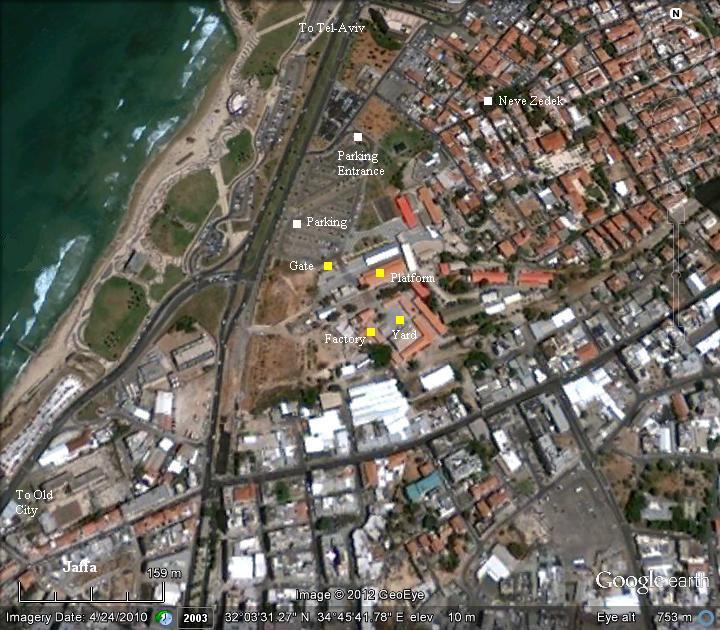 The first steam-operated locomotives were demonstrated in the early 19th C. In 1830 the first intercity public transportation line was constructed between Liverpool and Manchester, and within 20 years a whole network of lines with over 7,000 miles linked the UK cities. The railway construction spread out to the civilized countries, opening up a new era.

During the Ottoman period, the railway system was  the most effective way to support the transfer of goods and passengers within the land, and to link the vast empire together. Due to the poor conditions of the roads at those times, rail was a good solution. A map of the railways in the country (dated 1924) is seen here. 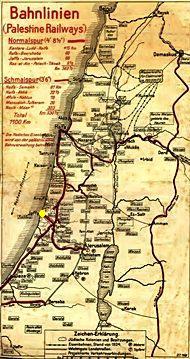 Jaffa station is marked by a yellow dot

The first rail section linked the city and the port of Jaffa to Jerusalem, which opened in 1892. Other sections were added later, interconnecting cities inside the Holy Land. During 1900-1908, the Ottomans built the western Hejaz railway section from Damascus to Medina in Arabia, with a connection to Afula and Haifa.  The design and management of the entire Hejaz railway project was commissioned to the German engineer Heinrich August Meisner, who worked for 14 years (1886-1899) in sections in other sections in the empire.

During WW1  (1914-1918), the Ottomans attempted to conquer the Suez canal from the British. They supported this mission by laying out an extension to Beer-Sheba in 1915, which reached Nitzana and Be’erotayim in 1916, then was completed in Kuseima (Biblical Atzmon, 10km west of Kadesh).

Josef Navon (1858-1934), a Jerusalem businessman with connections to the Ottoman administration, was the pioneer of the Holy Land railway. Josef spent 3 years in Constantinople to push the project, and raised the funds to finance it. In 1888 the Sultan finally granted Josef Navon the license to built the first railway. He then sold the permit to a French buyer.

In 1890 the first rail section was built in the Holy Land, linking Jaffa to Jerusalem. The rail width was 1000mm, based on the French narrow standard rather than the wider English standard (1435mm).  The advantages of the narrow tracks, a standard copied to all Ottoman rails in the area, is cheaper constructions costs and faster completion times.

The Jaffa-Jerusalem railway was opened in September 26, 1892, with a travel time of 3 hours and 50 minutes. 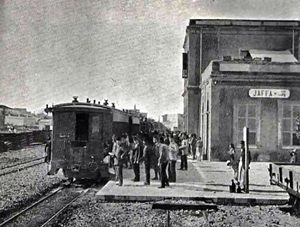 During WW1 the railway was dismantled to support the construction of the line to Beersheba (1915). However, the railways did not help to block the British, who captured Jaffa on 16 November, 1917.

In 1918 the British laid a new section from Lod (Lydda) to Jaffa, with an extension to the port, in order to support the logistics to their troops.

After the war, during the years 1920 to 1922, the British established the Palestine Railways company, who managed and upgraded the rail system in the Land.

The railway to Lod and Jerusalem was upgraded (1922). The opening ceremony is shown on the photo with the High Commissioner, Sir Herbert Samuel, driving the last spike at the Jaffa Terminus (Oct, 19201). 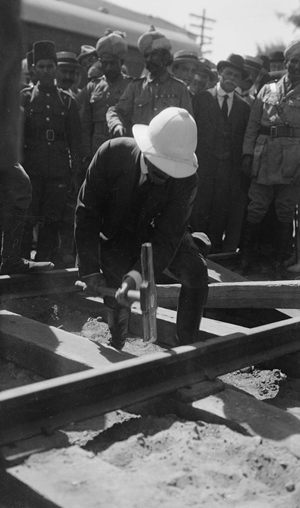 Photo of the Matson Collection – Library of Congress archive

The railway operated until the independence of Israel in 1948. Then the complex became a military base and was closed to the public.

Restoration of the station started in 2004, and the complex opened to the public in 2010. The charming buildings, shopping and leisure activities, and the proximity to the colorful old neighborhood of Neve Zedek – make the “Station” one of the hot spots in Tel-Aviv.

The restored train station building of the railway station is seen in this picture. It is located at the entrance gate to the complex. 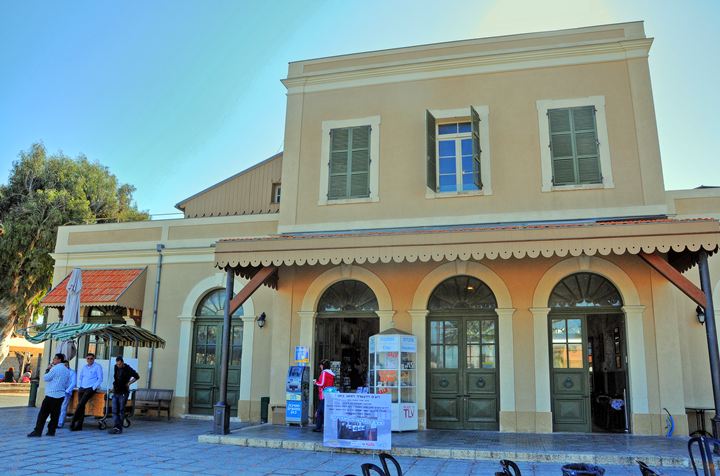 Sections of the rail and a sample railcar are laid out in the station’s platform. 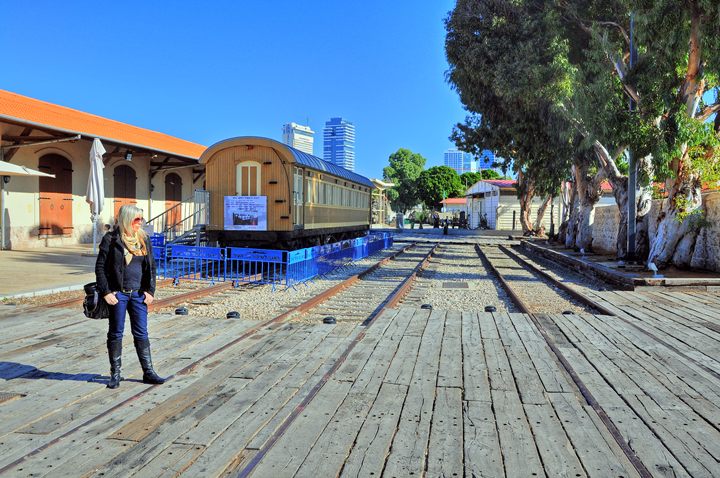 Inside the railcar is a visual show of the history of the railway. 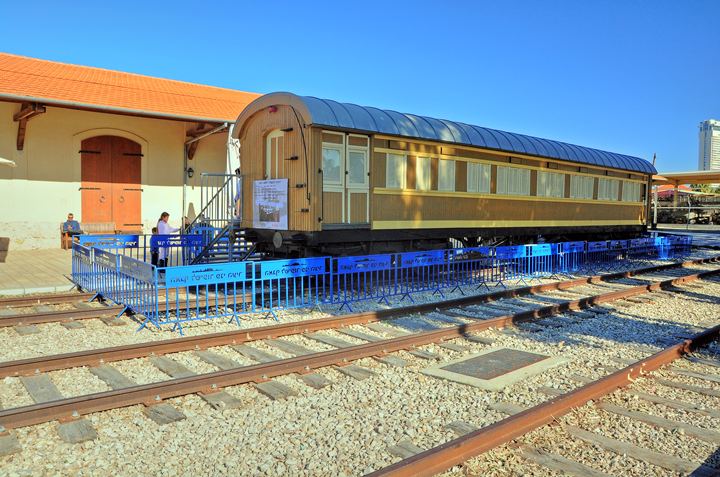 (b) The station yard:

To the south of the stations are restored buildings that once were part of the complex. 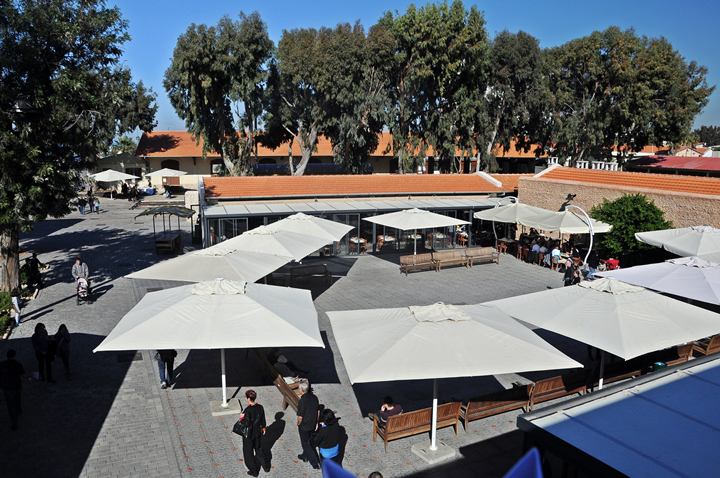 Among and inside the buildings are fashion stores, cafes, restaurants and shops. 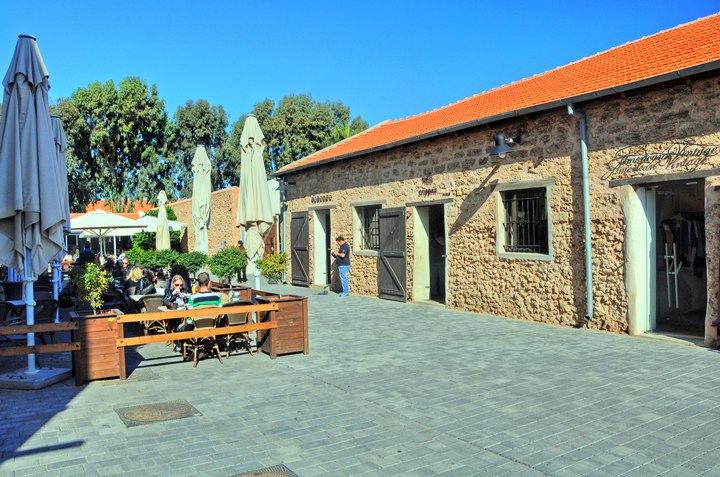 You can stroll around the complex and enjoy the early 20th C atmosphere. Just don’t forget to hop in time on the train to Jerusalem (just kidding, the modern train station is miles away). 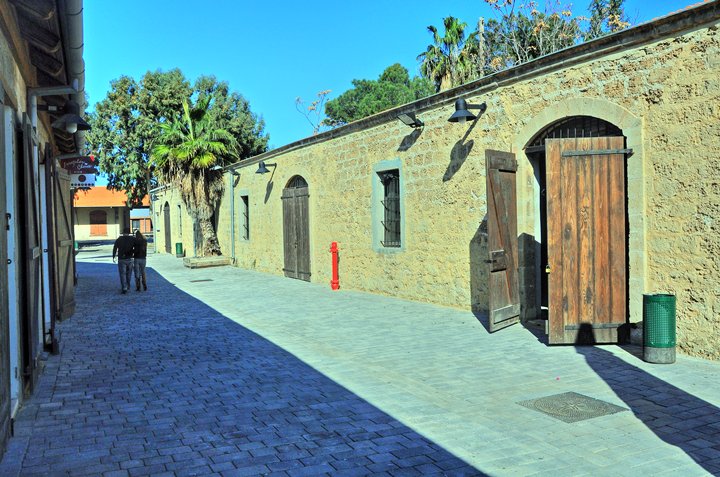 The Wieland factory operated at the side of the railroad station from 1905 until the end of the 1930s. It manufactured concrete-based building materials , such as tiles and bricks, and other products used for construction and agriculture. The family factory, owned by the German Templer Hugo Wieland, hauled its products to the country by rail, which explains its proximity to the railway.

German Templers were a  German Christian sect, an offshoot of the Protestants, who were sort of Christian “Zionists”. They came in 1868-9, and established 7 villages in Israel within 40 years, starting from Haifa. The Templers introduced the European construction methods and architecture design, and were the first to use concrete rather then stone. Initially the concrete blocks were imported from Europe. In order to reduce the import costs, the Germans established the first two factories of concrete tiles and bricks (Wieland in Jaffa and Beilharz in Haifa).

The original house of the Wielands, dated to 1902, is also located inside the station complex, as well as the factory’s store. These structures are typical of the Templar architectural design.

The restored structure of the factory is seen below. Its halls were restored and converted to host fashion shops. 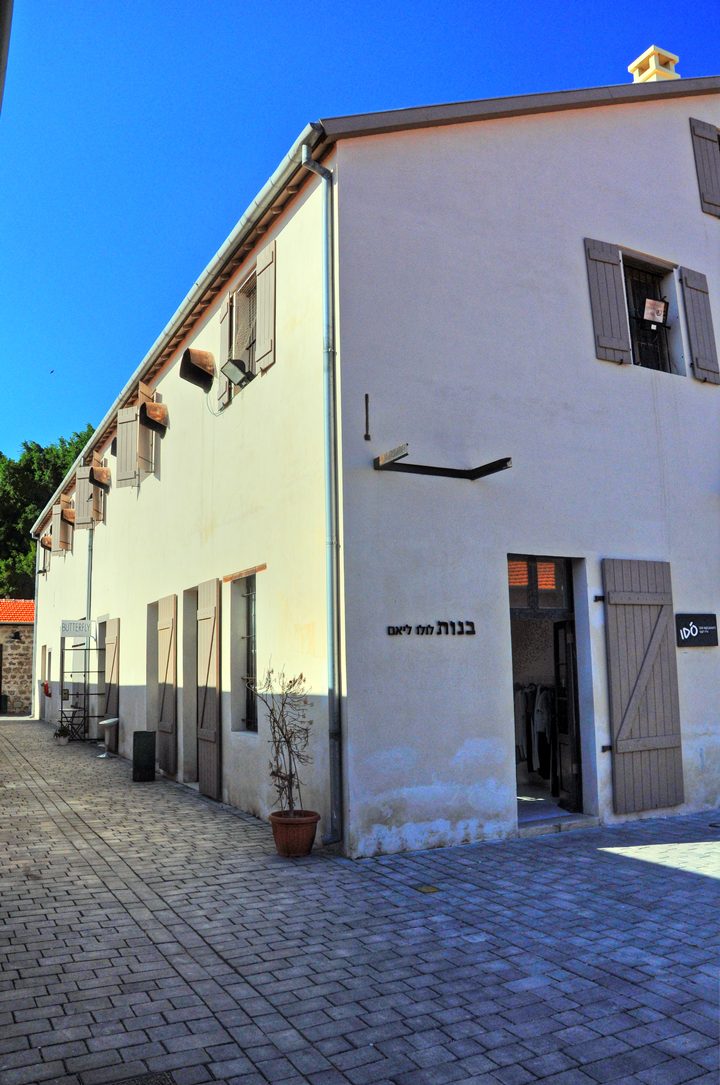 On the rear side of the Wieland factory is an old German water pump (dated 1906-1910). Water from underground reservoir was pumped up to a basin located on the factory’s second floor, then used for the concrete production. 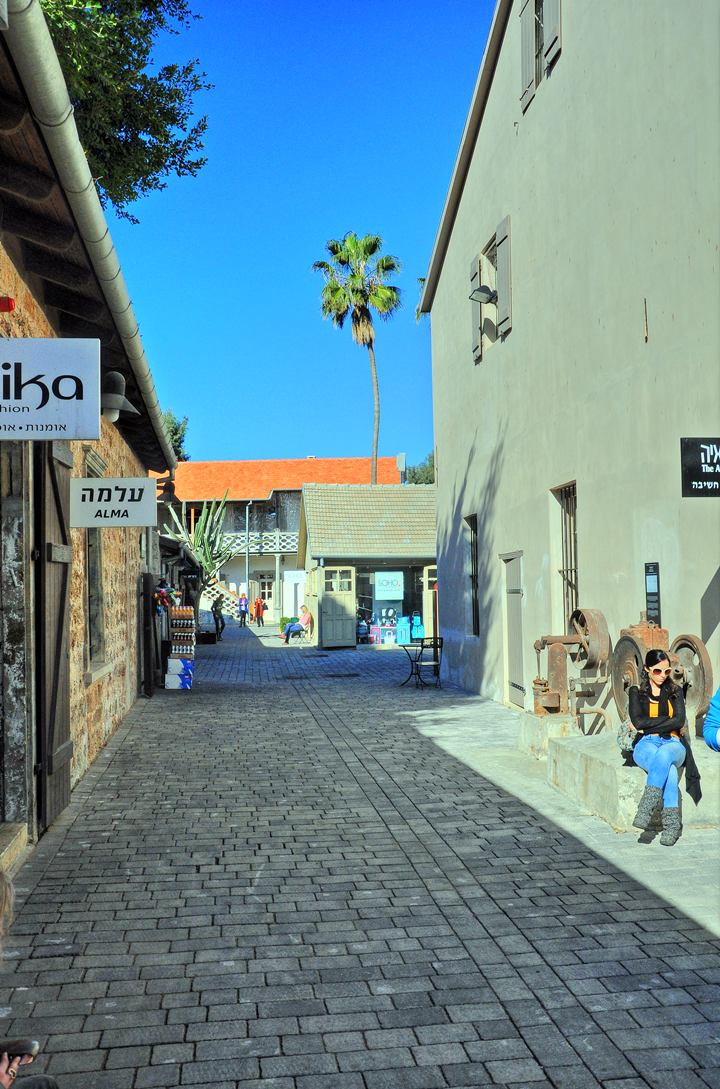 The next picture shows a closer view of the pulley of the pump, the well pipe and the pump’s rod.

This is how water pumps work: The turning wheel pulls the rod up and down, moving a piston inside the well pipe. The piston (hidden inside this rusted pipe)  contained a valve which opened when the piston was lowered, and closed when the piston was raised.  Water from the reservoir was drawn into the lower section of the pump cylinder when the valve was opened, then forced out through well pipe when the rod was raised, thus transmitting the water up to the second floor. 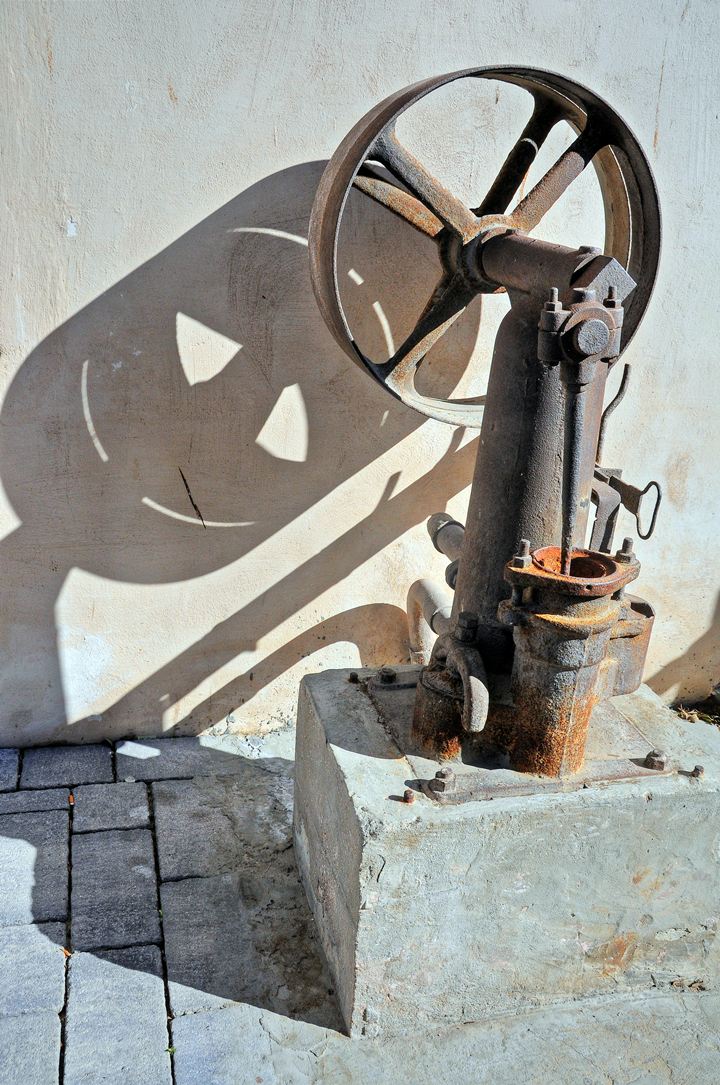 The Deutz water pump was operated by a kerosene motor, which turned the pulley around. Deutz is a leading German motor and generator factory, which was established in 1874. 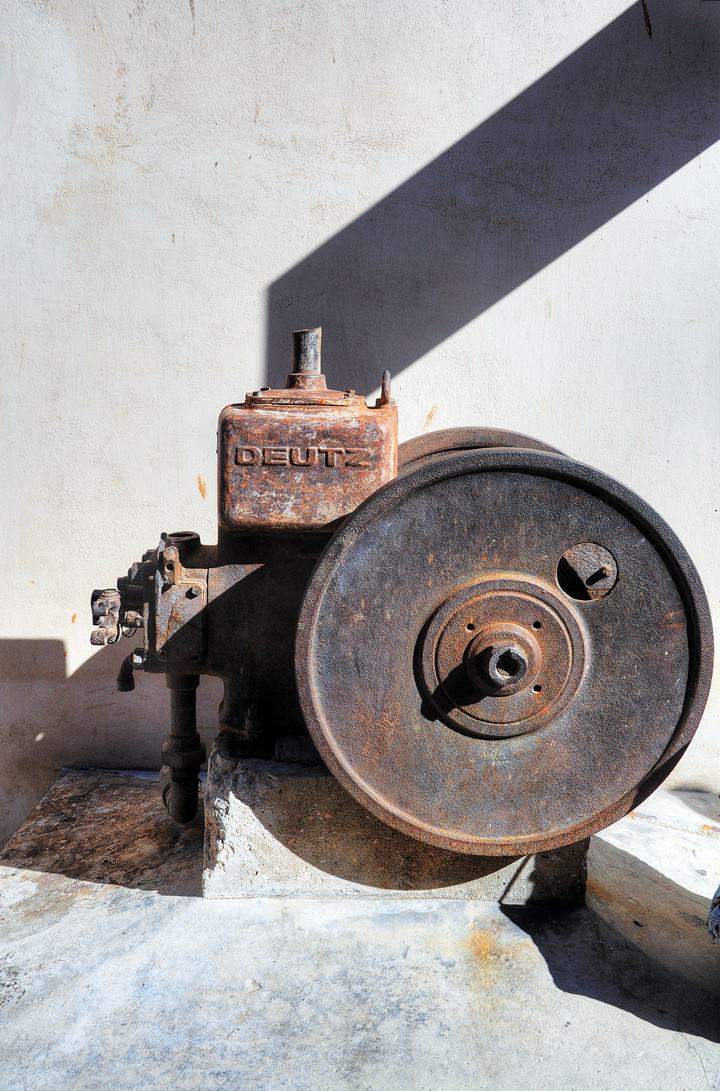 BibleWalks.com – Ride with the Bible