Ruins of a Middle Bronze Age fortress are located on an edge of a cliff overlooking the deep gorge of Nahal Kziv. A nature trail leads down to the spring.

Ruins of a Middle Bronze Age fortress are located on an edge of a cliff overlooking the deep gorge of Nahal Kziv, in the Upper Galilee area. It is the most preserved complete Canaanite palace found so far in Israel.

A trail leads down to Ein Tamir spring and Nahal Kziv nature park.

This aerial map indicates the major points of interest around the site.  The ruins of the fortress are located on the north bank of Nahal Kziv at the altitude of 391m – about 220m above the spring of Ein Tamir.

Hikers start from the adjacent Zeytim parking, descend 120m to the spring of Ein Tamir, then walk along the valley of Nahal Kziv. 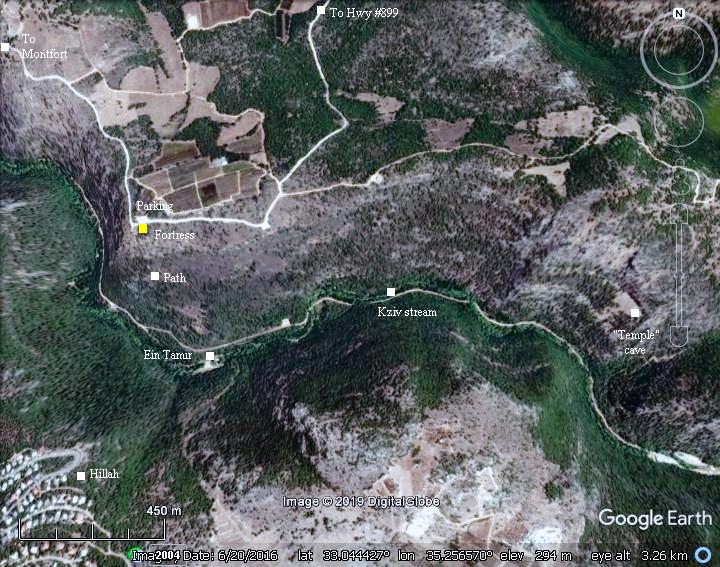 This Canaanite fortified palace, built in the 18th-17th century BC (MB2), belonged to a Kingdom centered in nearby Kabri. During the MB2 the city state of Kabri, west of the city of Nahariah,  expanded to the areas of the western Upper Galilee. The kingdom was a strong regional center and coastal power between 1750 to 1600 BC, with ties to Egypt, Cyprus and the Aegean. It held fortresses in Kabri, Nahariyah, Akhziv and  Avadon.

The fortress in Ein Tamir, probably Kabri’s  eastern most fortification, resembles that one exposed in Tel Kabri (area D). There were no other antiquities around this remote fortress, and so the archaeologist suggested that it was used as a palace, for the purpose of glorifying their hold of the land, rather than a strategic stronghold.

The fortress measures 32m by 25m, and is oriented north-south. It is now mostly hidden under the trees, so only the traces of the walls are visible.

The structure includes a courtyard (13 x 16m) with rooms around it on the northern section, and four rooms on the south. The external and courtyard walls are 1.5m wide, while the internal walls are 1.0-1.2m wide. The walls were exposed down to the floor, at heights of up to 2.2m.

The entrance was on the eastern wall, 10m from the northeast corner. It lead thru two casemate guard rooms to the courtyard on the north side of the fortress.

A staircase was found in the corner casemate chamber, implying that the fortress had two floors. 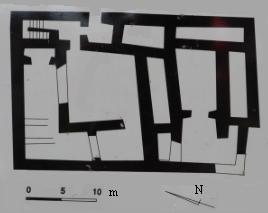 Another theory is that Ein Tamir was the western frontier fortress of the Middle Bronze city in Ikrith – 4km north east of this site.

The fortress underwent limited excavations in 1990 by an IAA team, that included  youth volunteers from the field school of Akhziv, guided by their instructors from the field school, and with the assistance of the nearby Kibbutz Eilon. The team, The headed by Nimrod Getzov of the IAA, exposed the north east corner area. According to the  ceramic fragments, the archaeologists dated the structure to the MB2 period.

The site is in a public area, with a convenient parking place and picnic tables (KKL’s Ein Zeytim). A trail down to Ein Tamir spring, and hikes along Nahal Kziv stream, are popular hiking excursions.

A drone captured a view from the west side of Zeytim (Olives) parking lot, which is located at the side of the ruins. On the right is the deep gorge of Nahal Kziv. 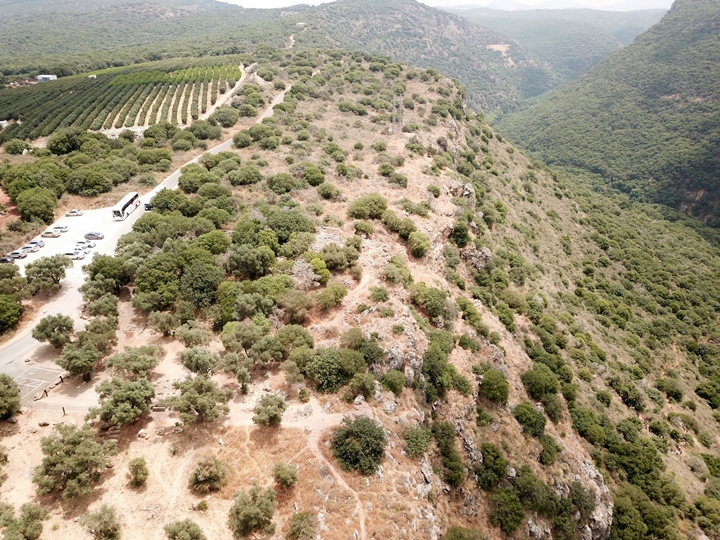 Hikers leave their cars here, then descend thru a nature trail down to the valley.

The 2 buses that parked here are waiting for a group of American youths who came to tour the country within the context of Taglit (Birthright Israel). Their guide gave them a speech on the area, then walked with them down the trail. This is the best way to learn about Israel and absorb its spirit: by foot. 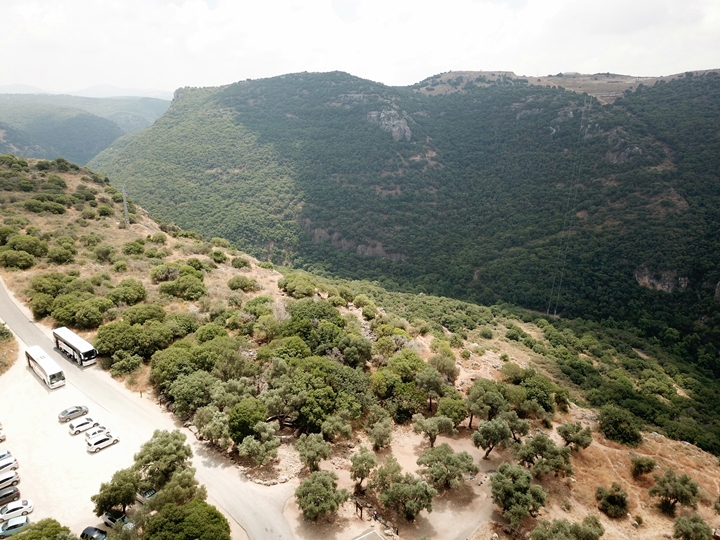 A closer view of the ruins are in the following view. Notice the 2 persons walking on the south-east corner of the fortress, near the sign of the nature reserve. 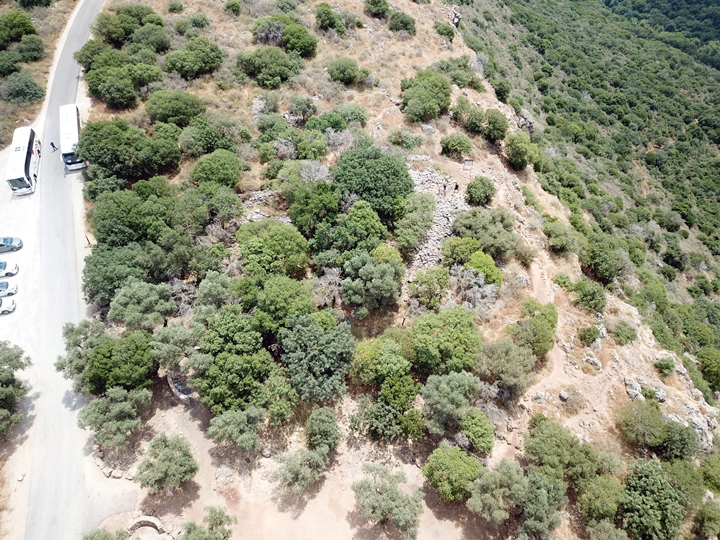 Closing on the ruins, the sections of the walls are better seen next. The trees and bushes now cover most of the ruins and it is hard to see the plan of the fortress. This view is oriented to the north. 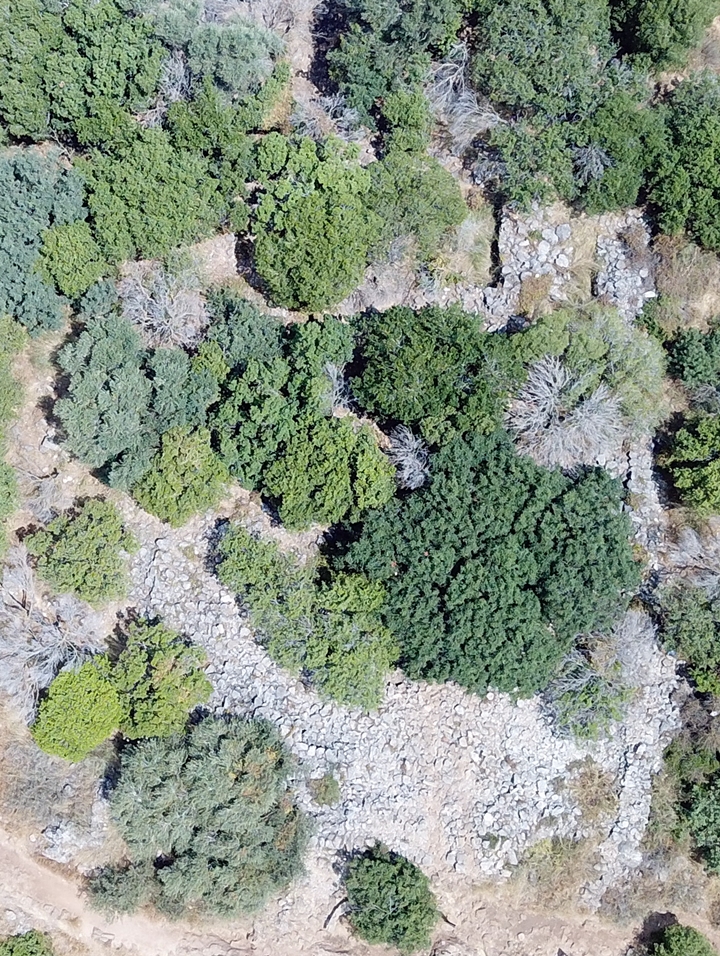 On this view we tried to draw up the plan of the walls, using the yellow lines. 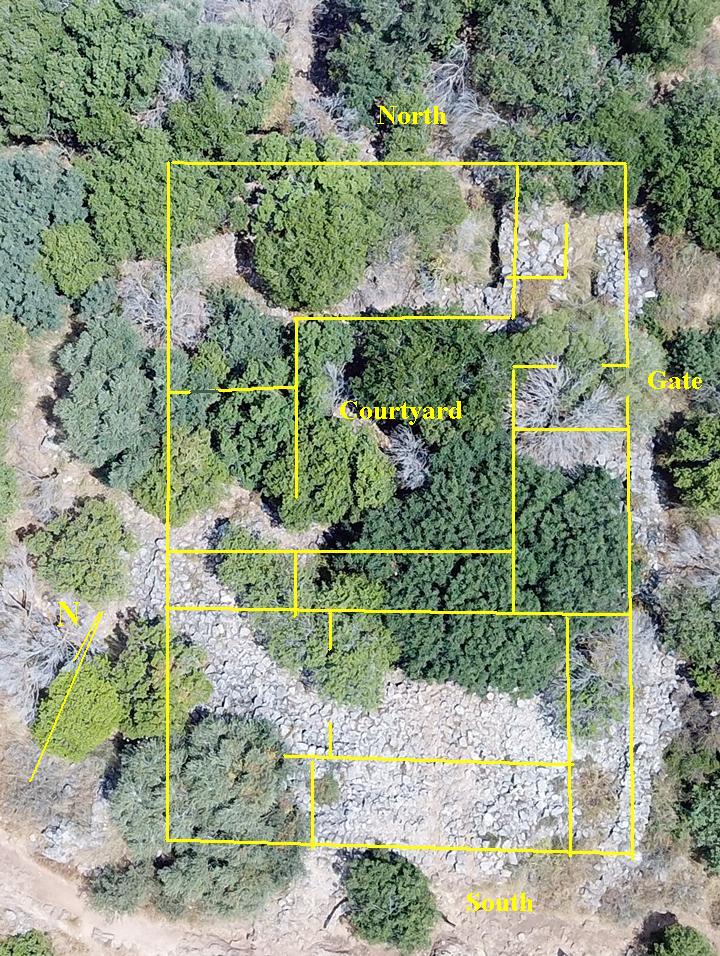 Going from the sky down to the ground level, we tried to see more details of the fortress.

The northern wall is the closest to the road. The walls were constructed by medium sized field stones, typical of the Middle Bronze age. They were exposed to the floor level, with heights of up to 2.2m. 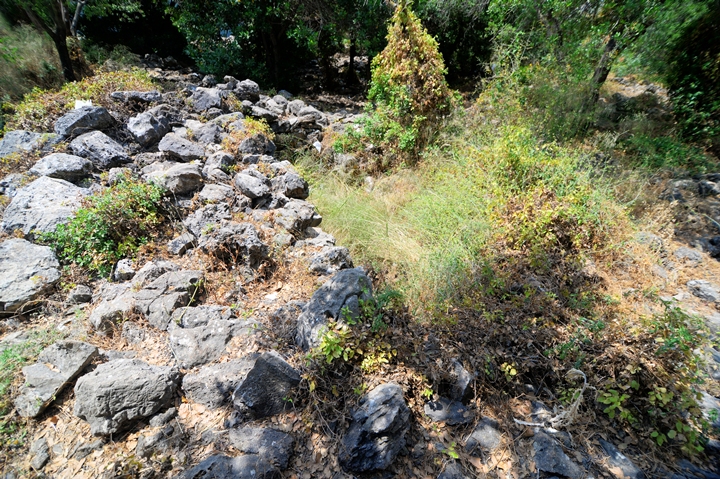 The area near the north-east corner of the fortress is in the following photo. 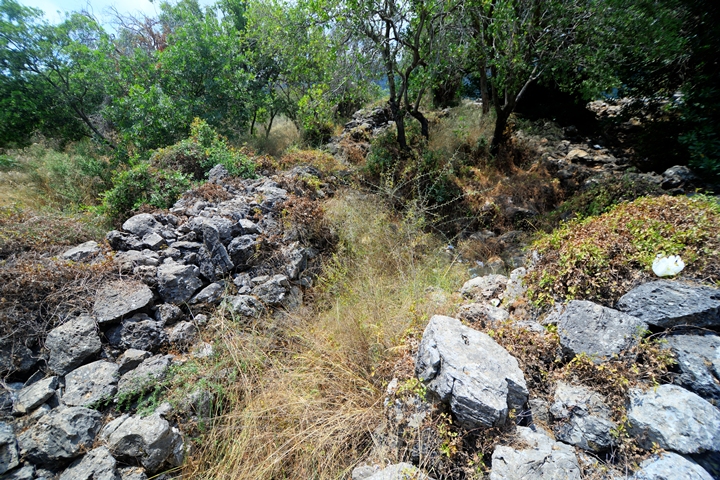 Another section of the eastern wall: 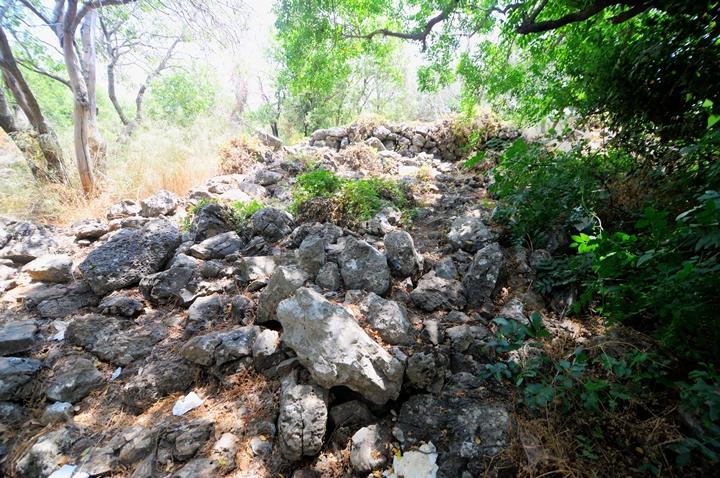 The south eastern corner of the fortress is next, looking towards the west. This wall was the southern side of the fortress, adjacent to the edge of the cliff. 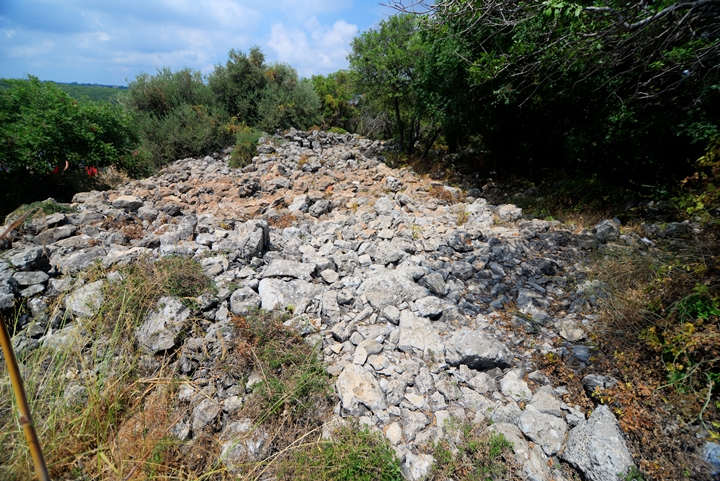 From the edge of the cliff are great panoramas of the valley of Nahal Kziv. 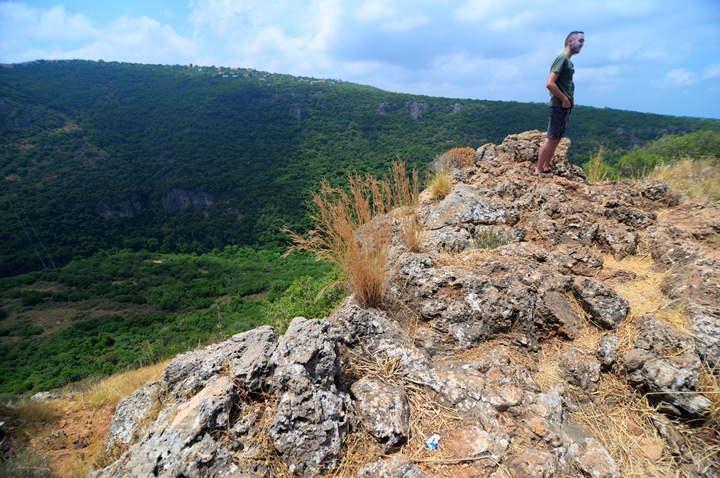 From this point there is a trail that descends to the valley.  It is marked with blue and white stripes. 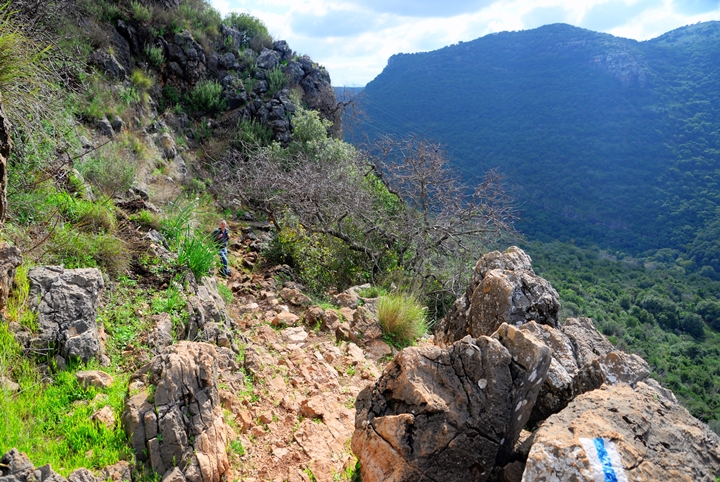 The nature trail down to the bottom of Kziv is quite long, but offers nice views along the way.

It is of course harder to climb it back, so we took a different route – climbing back thru the temple cave, then walking back along the north bank. This alternative trek is much longer but the visit to that mystery cave was always a desired target. 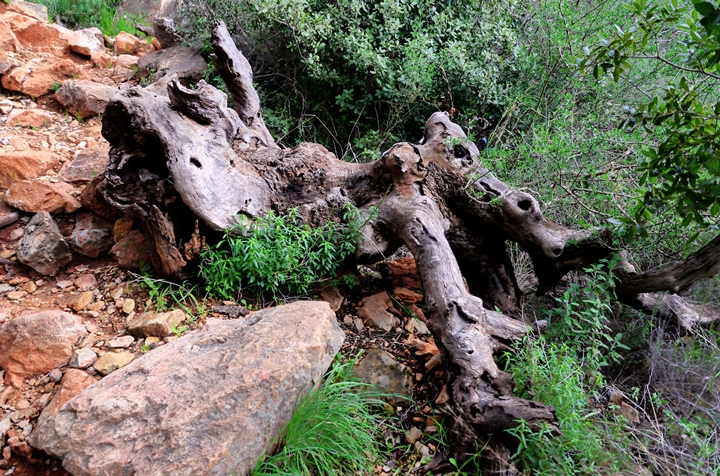 The trail reaches to spring named Ein Tamir (Hebrew for the ‘hidden’ spring). The spring is indeed hidden, and we couldn’t find it due to the gush of water.

The Ein Tamir spring emerges out of a tunnel 15m long, which can be entered part of its distance. 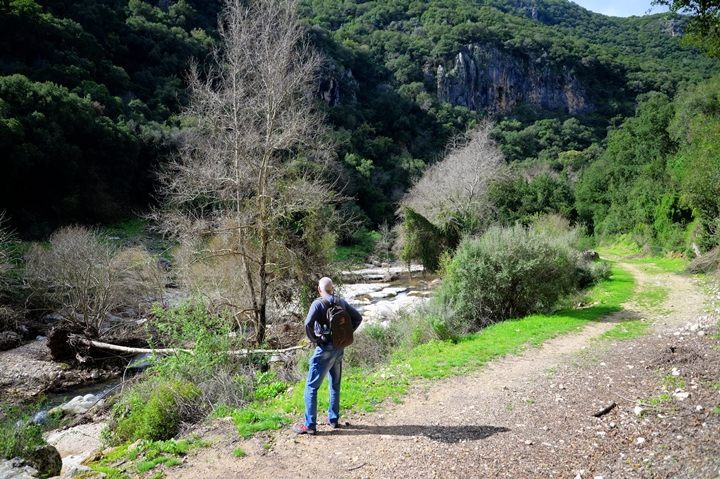 A that time of the hike, the waters of Kziv were strong, rushing down the valley with force after a heavy winter storm. 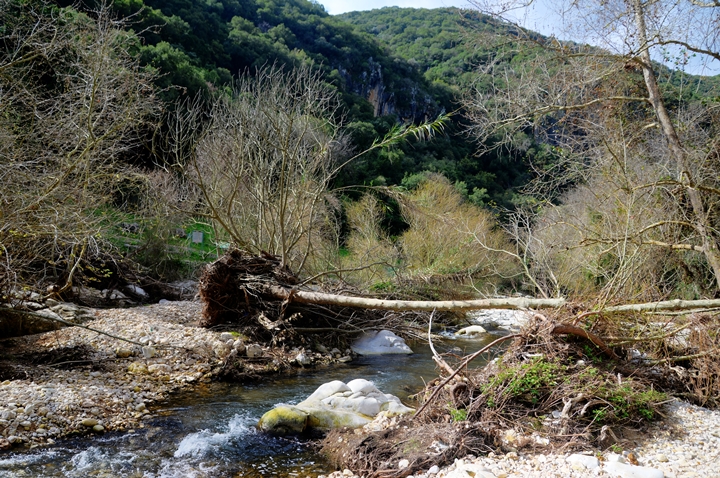 Although the hidden spring remained hidden, we enjoyed the tranquility of nature. This was our last nature hike before the Corona Virus hit Israel in March 2020, so this charge of our nature batteries lasted during the crisis that paralyzed the Israeli and world wide tourism. 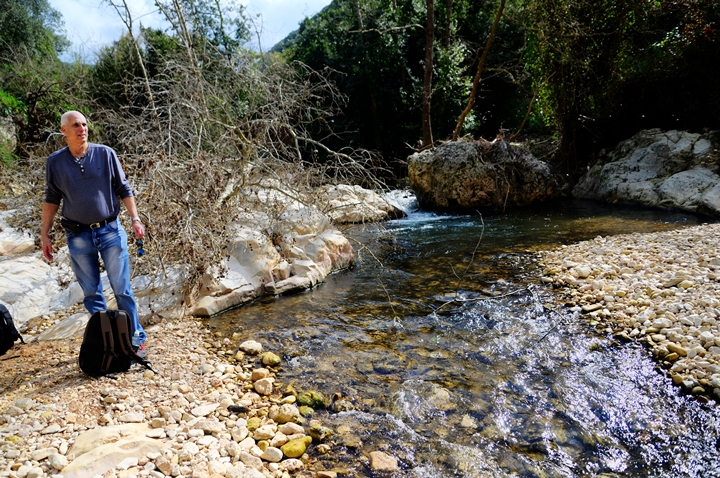 The nature trail continues east along the steam. 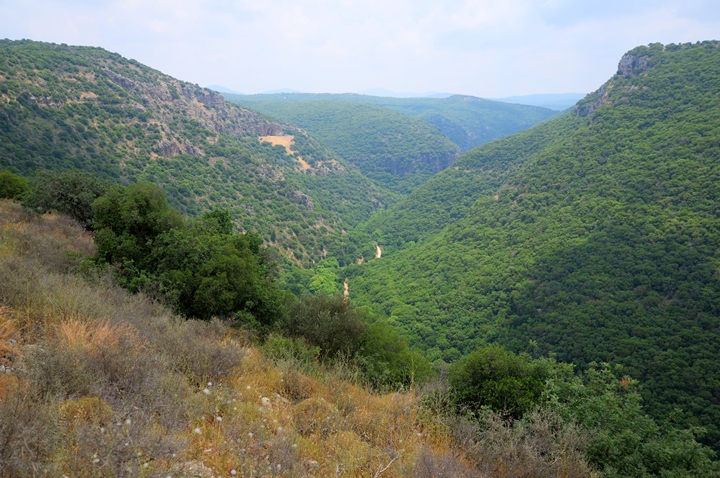 The valley is covered with bush, Oak and tall Platanus (Dolev) trees. 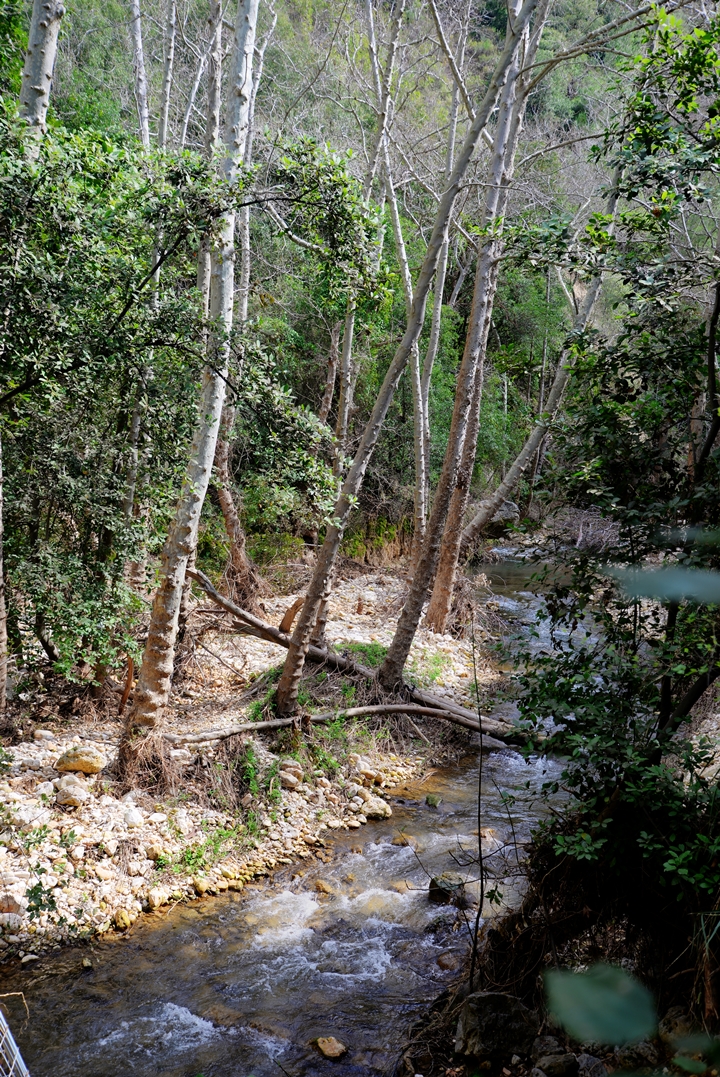 Above, the cliffs on the south bank tower 270m above the valley. In this cliff are dozens of caves that were used as hiding places during the Great Revolt against the Romans (67-70 AD) and perhaps during other periods. 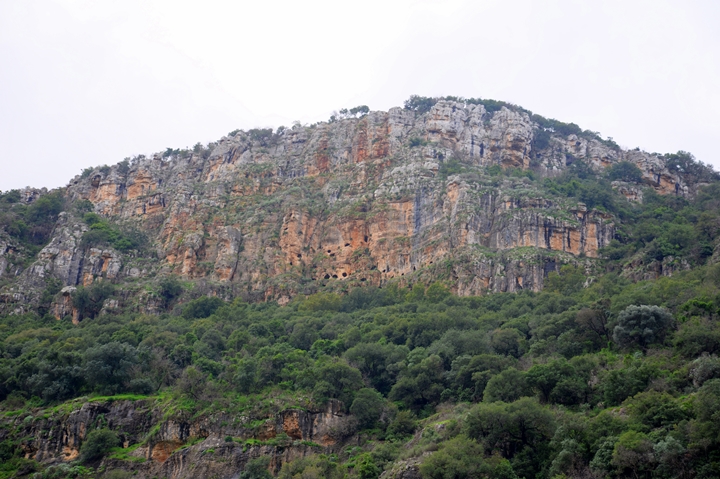 Farther up the stream, is a standing house dated to the 12th century Crusaders period. 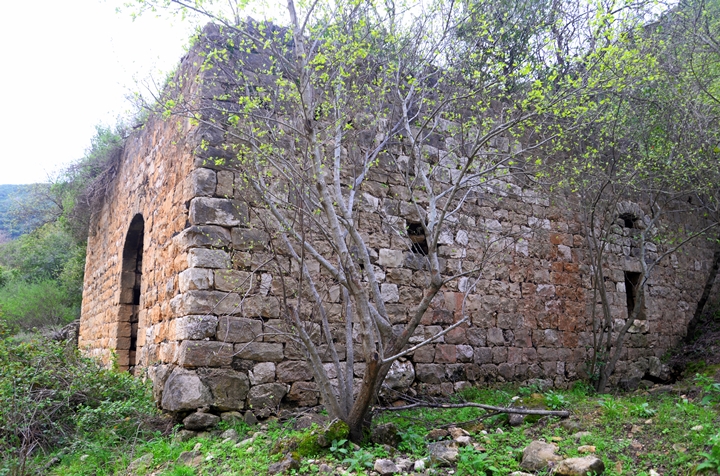 The farm house was operated by the Crusaders of the Montfort fortress, which is about 5km downstream. 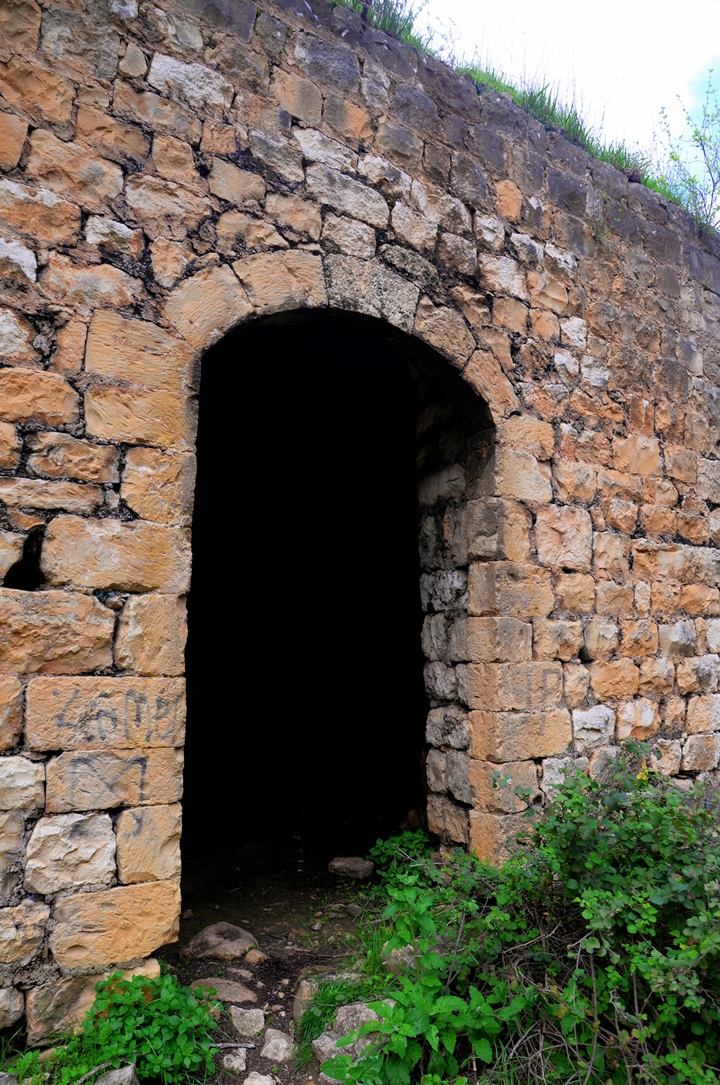 Inside the farm house are two halls, with arched pointed vaults, typical of Crusader buildings. The arches supported the ceiling. 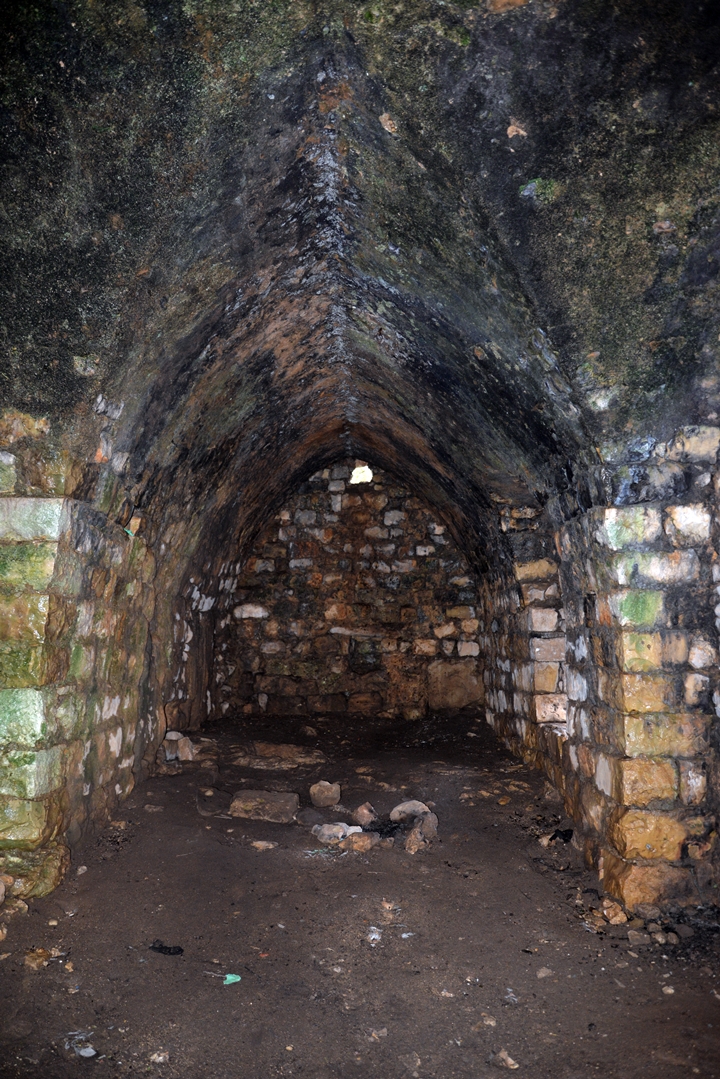 A view of the eastern side of the building is next. Along the trail are red Anemone (Calanit) wild flowers typical of the season (March). 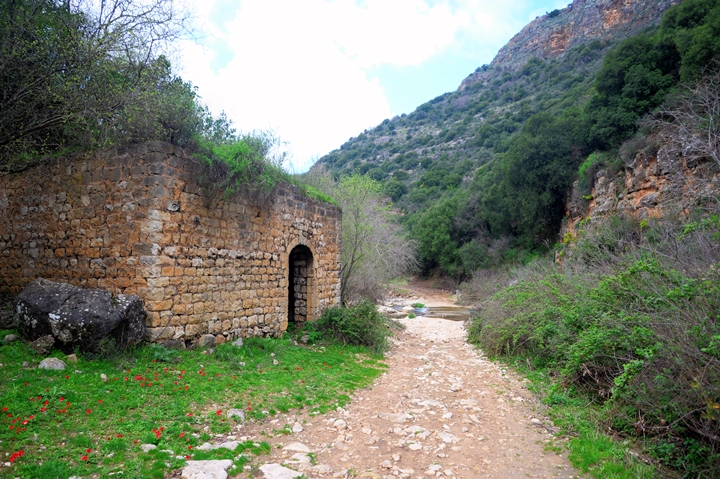 Farther on, the stream crosses the trail. To continue, you have to get a little wet. The strong stream is only during few days of the winter. 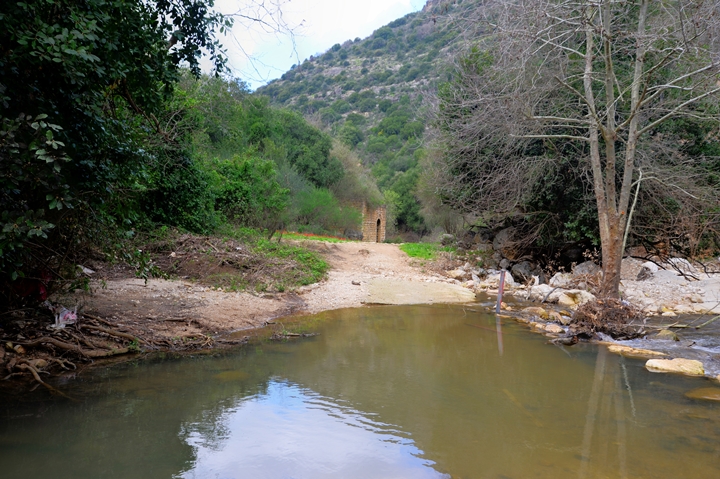 On the north bank of Kziv, about 130m above the Crusader building, is an interesting cave. On the external wall of the cave, known as the Temple cave, is a large engraving of what looks like a Roman soldier.

Read and see more about the Temple cave. 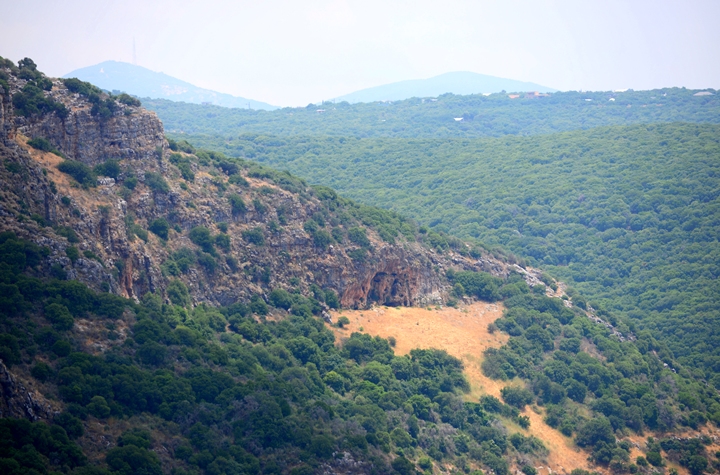