Beit Shean was a major Biblical city, located on the ancient trade route. A new amazing multi-sensory night show has  transformed the excavated site into a unique world class experience.

Tell Beit Shean (Beth Shean) was a major Biblical city, located in the center of crossroads between the Jordan valley and the Jezreel (Yizreel) valley. It later was expanded into a large Hellenistic, Roman and Byzantine city of Scythopolis. The large city was leveled by a massive earthquake in the 8th century AD.

An amazing multi-media multi-sensory night tour has been recently being launched in the national park of ancient Beit Shean. The 3M$ project is the first of its kind in the world in an archaeological site, and the 4th largest in the world.

The national park is located on the north side of the modern city of Beit Shean (Beth She’an), which is located on the south-east corner of the Galilee. It is located south to the Harod creek which flows from the foothills of the Gilboa mountain. The site is close to the Jordan river, which flows 5KM to the east of the site.

An aerial map of the ruins of Beit Shean is shown below, with the north side on the top of the photo,  indicating the major points of interest. You can point on the purple points to navigate to the selected point. 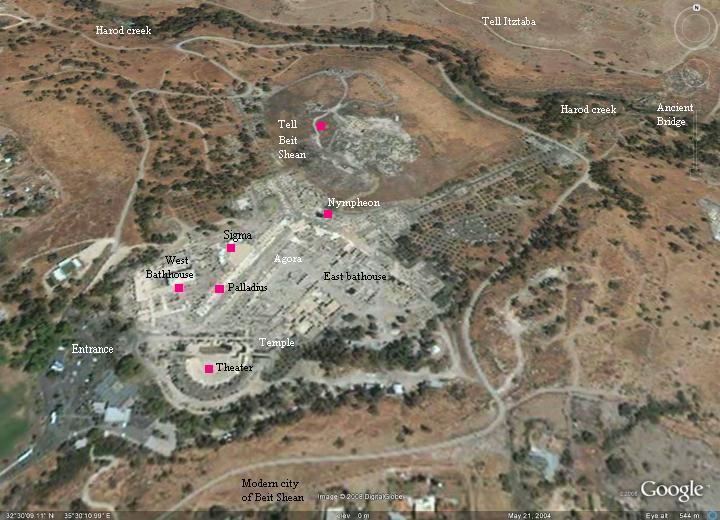 Check the overview page for the history of Beit Shean.

The light and sound show was opened in July 2008, with an investment of 3M$ by several government organizations. The show is open 300 nights per year, and requires advanced reservation. Every 20 minutes a group of 100 are entered to the park, view a 10-minute multimedia orientation presentation, then follow a guided tour of the enchanted ancient city.

A view towards the north is seen in the photo below. The ancient Biblical Tell is seen in the background, dominating the lower Roman city, and illuminated by the light show. In the center is the colonnaded Palladius street. 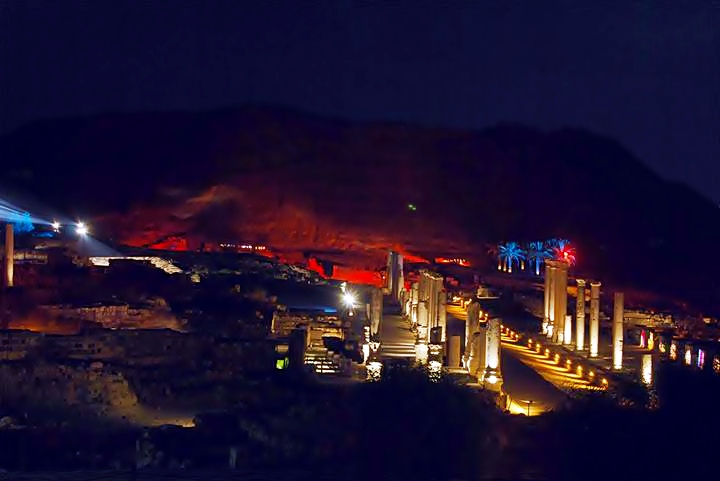 The colonnaded Palladius street extends  from the theater to the foothills of the ancient Tell, 150M from south to north.  The street was built in the Roman period, and restored during the Byzantine period. On both sides of the 24M paved street was a raised roofed sidewalk with shops and  public houses. 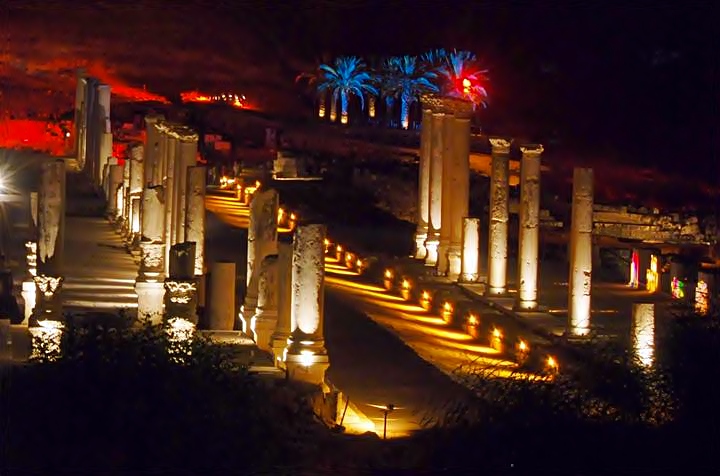 The multi-media show along the street includes changing light patterns, sounds of carriages and horses, and projection of various images on the columns, structures and walls.  This brings back the street to life as in a time machine, and the spectacular effects daze before your eyes. The vast size of the show, with the illuminated structures on the sides and in the background , make this an unforgettable experience. 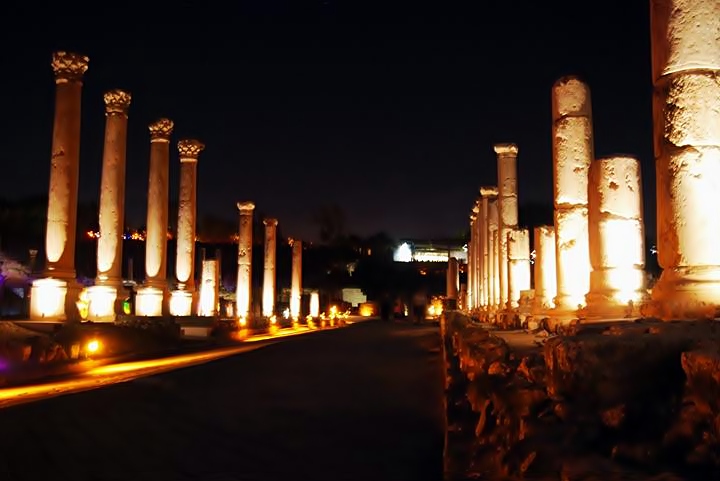 Along the Palladius street, on the south-western side, is a large bathhouse. 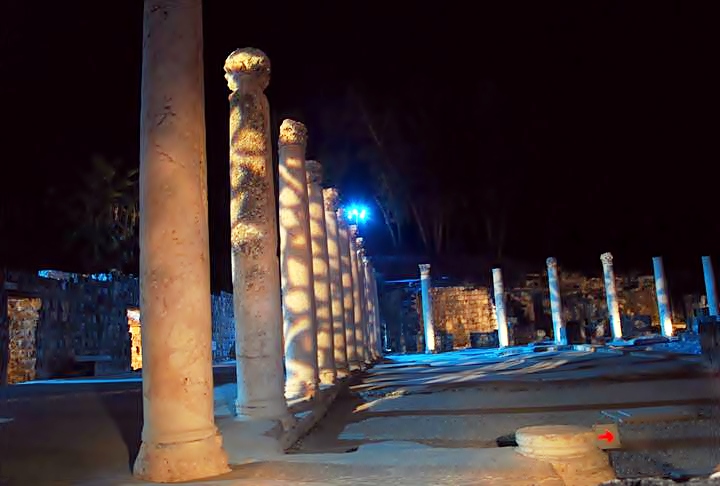 A view of the west bathhouse structure. 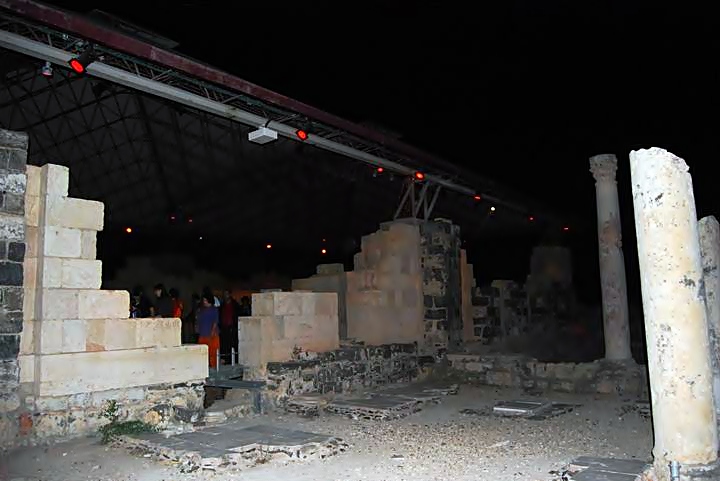 (d) The Tell and the north area

Tell Beit Shean is seen in the photo below, illuminated by the special effects. It is 106M under sea level, since the area is located in the Jordan valley depression. The steep hill is 80M above the Harod creek.

The Roman civic center is seen in the south foothills of the Tell. 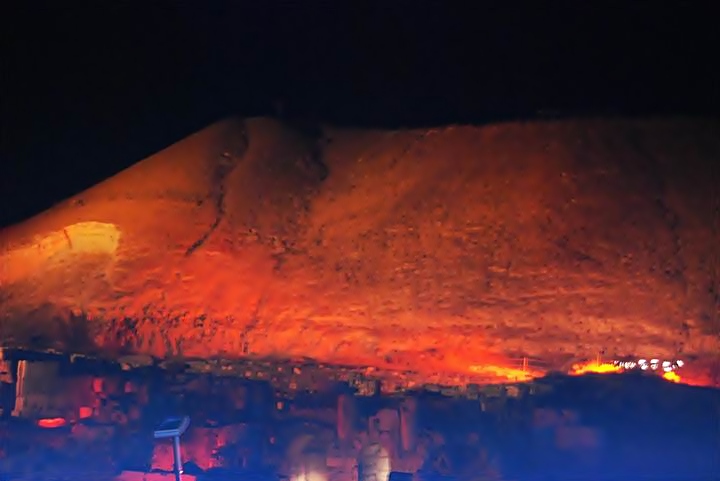 A closer view of the area below the Tell.  This was the location of the nympheon, the 2nd century AD water fountain, and other public structures. Large columns lay fallen and broken over the paved street, attesting to the force of the massive earthquake that devastated the city. 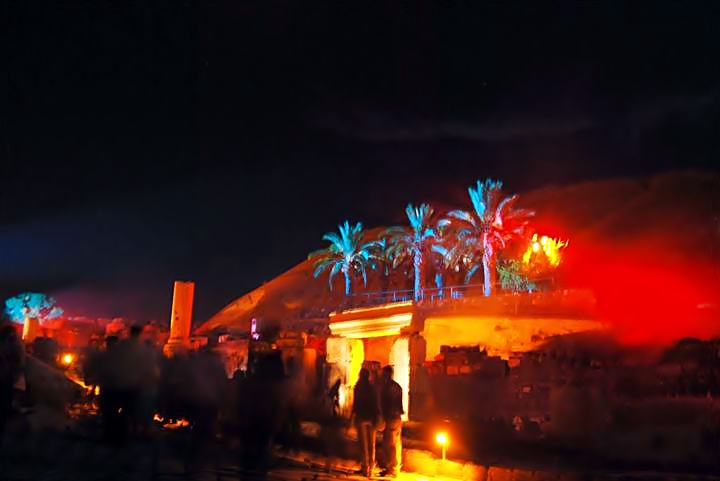 The theater was built in the 1st century AD. The structure seen today is from the end of the 2nd century, which was used until the 8th century. The spectators entered to the theater through the arched entrances. The theater set behind the stage was 20M high, and is facing the Tel. 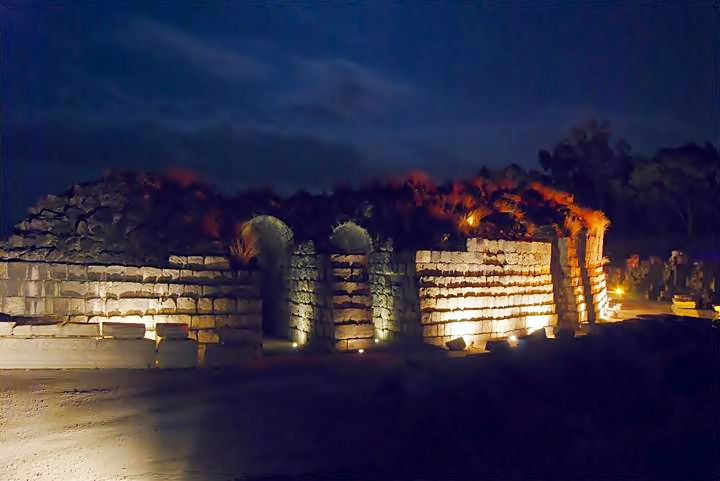 The theater contained 7,000 seats, arranged in a 110M diameter structure which was cut into the hillside. Only the lower of the three levels of seats have survived, with 13 rows of limestone seats, as seen in the photo below from the direction of the stage.

The lights and slides projected over the seats change in conjunction with the sounds, and create a sensation of performing live on the ancient stage. At the end of the light and sound cycle, the projected spectators applaud to the visitors. 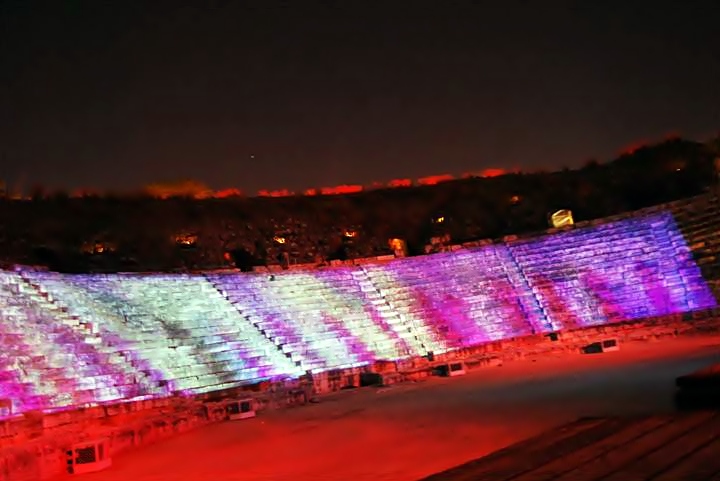