An ancient synagogue from the Byzantine period, where a beautiful mosaic floor  was found, illustrating a Zodiac, the Ark, and the binding of Isaac.  Nearby, a center of the Makuya Japanese movement.

The ancient synagogue of Beit alpha, dated to the Byzantine period, was a 20m x 14M building. It was covered across its entire floor by a magnificent colorful mosaic floor. The mosaic floor, which was very well preserved, includes a Zodiac , Jewish ritual objects and the ark,  two inscriptions in Greek and Aramaic,  geometric patterns and icons of animals, birds, plants and fruits, and a scene from the Biblical story of the binding of Isaac.

The ancient synagogue is housed in a modern structure which was built over the floor in order to protect it,  and is open to the public. This national park is located between the two modern Kibbutz of Beit-Alpha and Hefzi-Bah. The visitors entrance is through a parking area located inside Kibbutz Hefzi-Bah.

On the highest point in Kibbutz Hefzi-Bah, on the foothills of Mt. Giboa, is a small Japanese garden and a learning center of the Makuya Christian movement. 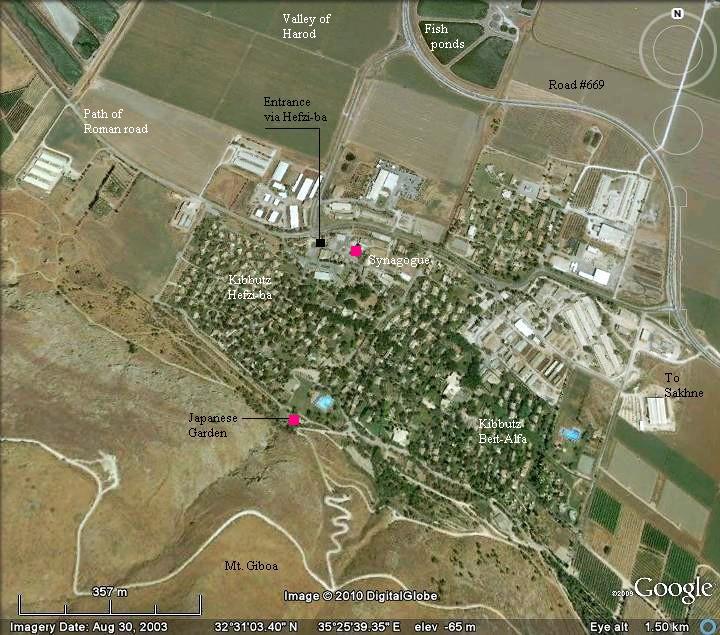 Beit-Alpha was a small Roman/Byzantine agriculture village,  situated at the northern foothills of Mt. Giboa. It was located near the Roman road from Scythopolis (Beit She’an) to Megiddo/Legion  and Caesarea.

The village is marked (with a yellow circle) on a section of the  Peutinger map (Peutingeriana tabula), which is based on a Roman map  of the 4th century Imperial Roman roads.  Note that the map is inverted with the west on top. On the east end is “Scytopoli”, and on the west side is Caperconti (Legion near Megiddo) and then Caesarea Maritama (“Cesaria”). 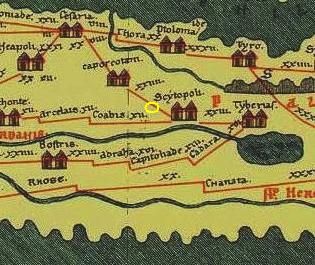 The village was established during the 1st century AD or so. The synagogue itself was built at the end of the 5th century, while its mosaic floor was commissioned during the beginning of the 6th century, at the times of Byzantine emperor Justine I (reigned 518-527 AD). The artists who are named in the mosaic inscription – Marianos and his son Hanina – are the same mosaic craftsmen of the nearby city of Beit She’an. A hoard of Byzantine coins, dated to the beginning of the 4th century, were hidden in a Genizah (ritual archive place) under the apse.

The synagogue continued to function under Arab control, but was destroyed in the massive earthquake of 749 AD which leveled many of the towns and cities in the region. It remained in ruins until the 20th century.

Under the Arab control, and later the Mameluk and Ottoman periods, the water channels and irrigation of the area were not repaired ever since the great earthquake. Soon enough, the whole basin of the Harod valley, between Afula and Beit She’an, turned into one big swamp. This prevented any use of the land, so the region remained deserted until the Jewish resettlement of the Jezreel valley in the 1920s.

The site was examined in the PEF survey (1866-1877) by Wilson, Conder and Kitchener. It appears as “Kh. Beit Ilfa” in the center of the section of this map of 1878.  They described it as “Foundations of buildings and walls. There are in the ruins many stones well dressed, and apparently older than the Arabic work”. They added “Guerin found, a little to the right of the ruined and abandoned village, numerous heaps of stones, the greater part of fair dimensions, and dispersed in the midst of high thorn-bushes. Among these remains were noted also two ancient sarcophagi, each measuring 9’10” long by 3’3″ broad, decorated by rare ornaments…”. 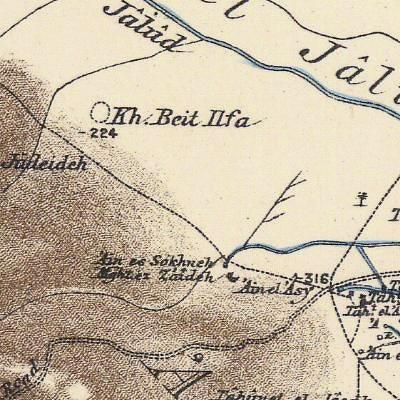 The site is situated near two ancient Roads – marked by a single dashed line (below it, going from Beth She’an to Megiddo) and one at the bottom of the section which is marked by a double dashed line (going thru Fakouah to Jenin).

The mosaic was discovered in 1928 by the settlers during the development of the area. The excavations were managed by E.L. Sukenik in 1929, the famous archaeologist who acquired the Dead Sea scrolls and the father of the renowned archaeologist/general Yigal Yadin. The picture below (courtesy of the museum) shows the professor directing the dig, standing on the right side of the dig.

The discovery and the dig was an important event for the Zionist movement – the first ancient synagogue excavated by a Jewish archaeologist in the newly founded land. 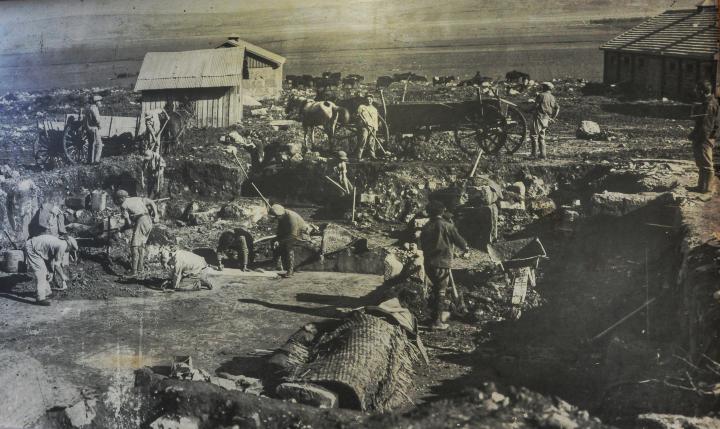 Today the site is a national park and is a recommended place for a short one-hour stop. An audiovisual presentation shows a humorous  play of the process of the commissioning of the mosaic, which is projected around and over the mosaic floor.

A reconstruction of the Synagogue is seen in the model which is located near the museum’s entrance. This was a two-story rectangular structure, facing south-west towards Jerusalem.  The roof was entirely covered by ceramic tiles. The upper level probably had functioned as the women’s wing, and stairs led to it from the right (west) room.

An open courtyard (atrium, 10m wide x 7m long) is reached from the street, with an opening on the western side of the courtyard wall. The courtyard is paved with mosaics, decorated with geometric patterns.  On its south side is a covered narthex (2.5m long), which leads via three doorways into the inner prayer hall. 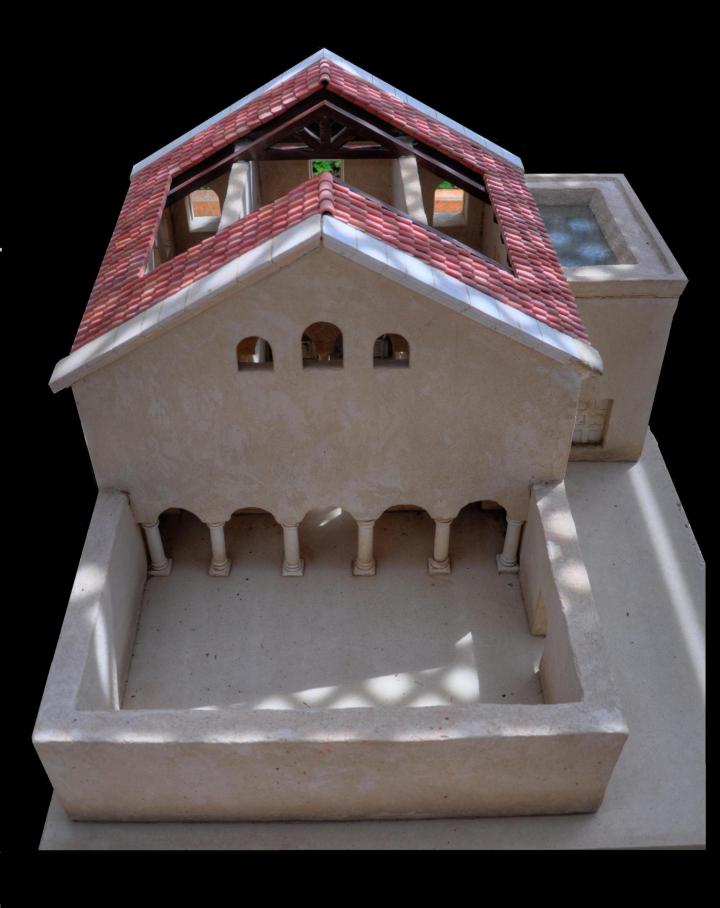 The prayer hall (10m wide  x 8m long) consists of a central nave and two side aisles, separated by eight stone pillars, which are seen in the photo. The entire floor in the prayer room is covered with a colorful decorated mosaic, with the main paintings and inscriptions arranged along the central nave. The floor of the western aisle is decorated with  geometric patterns, while the eastern aisle is paved with undecorated white stone. 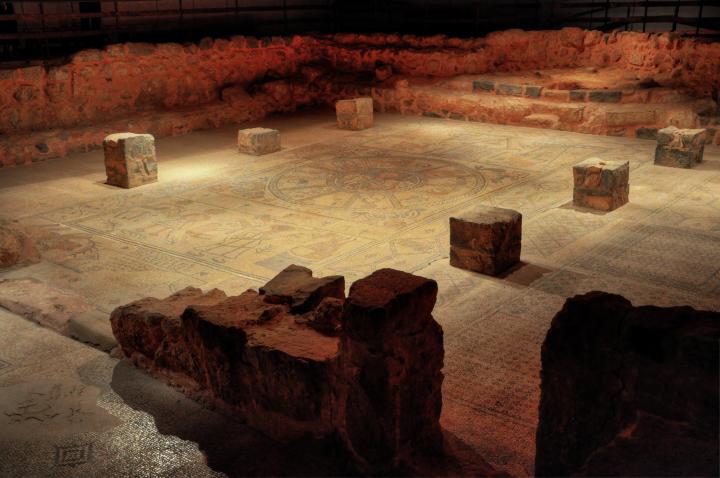 A rounded raised recess (2.4m deep) on the south side of the synagogue is where the ark stood. There are three steps leading up from the floor. 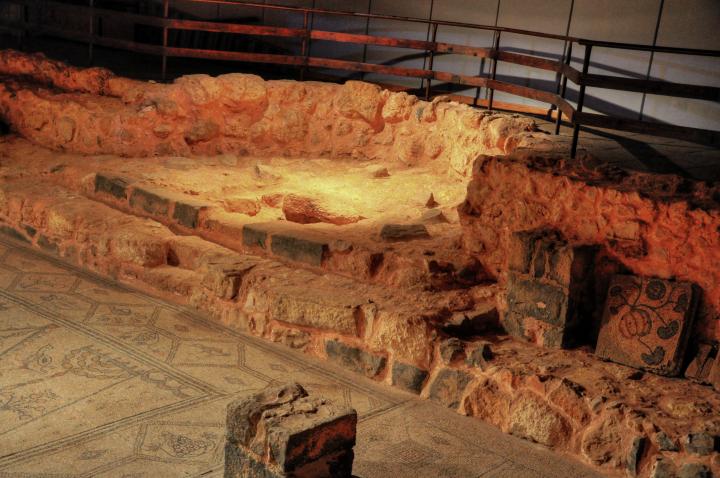 The mosaic in the central nave is arranged along the length of the floor, and consists of three panels:

Around these three panels are geometric patterns, with paintings of animals, birds, plants and fruits. 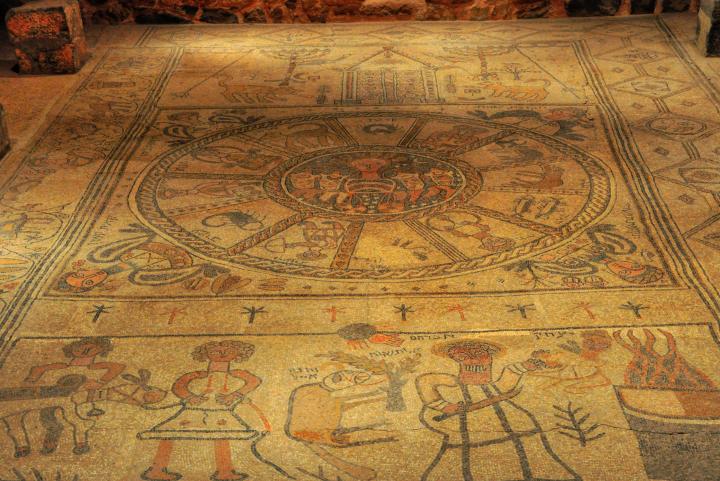 These three panels are detailed below.

The upper (southern) section of the mosaic was close to the holiest section of the synagogue. Therefore, this panel has the Jewish religious illustrations, with the Torah ark in its center. This design is also common to other ancient synagogues in the region.

The covered ark is located under a roof, two ostriches flanking the edge of the roof, and the eternal flame in the center. A candelabrum and a lion are depicted on each of its sides, and other ritual objects appear around it  (ram’s horn, palm branch, citron fruit and incense shovel).

The center of the Zodiac is seen below, which symbols the cycle of Nature. In this scene is Helius, the Greek God of the Sun, ascending from the sea on a carriage pulled by4  horses. Around the center of the zodiac are twelve signs of the Zodiac, with their Hebrew names.

Helios was the Titan god of the sun who presided over the  the measurement and divisions of the day, the year and the seasons.  It was a common motif in ancient synagogues in Israel, where 7 sites (Sepphoris, Hammat-Tiberias, Yafia, Khirbet Susiya,  Beth She’an, Naaran and Husifa) illustrated the twelve zodiac signs with Helios in a sun chariot, most of them  surrounded by angels. Although this is a Jewish synagogue, these pagan symbols were common at that period and used only for decorative purposes. 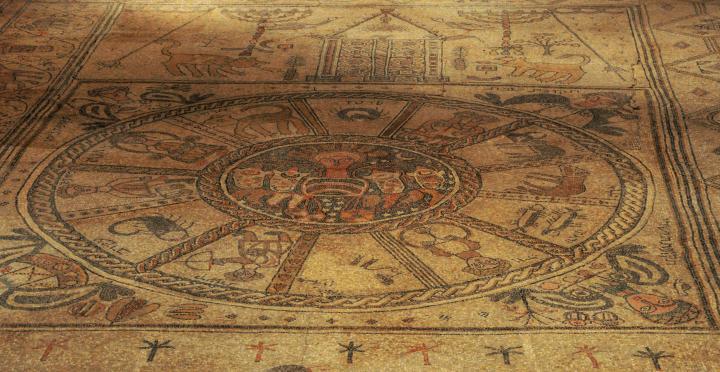 Another view of the zodiac in the center of the floor: 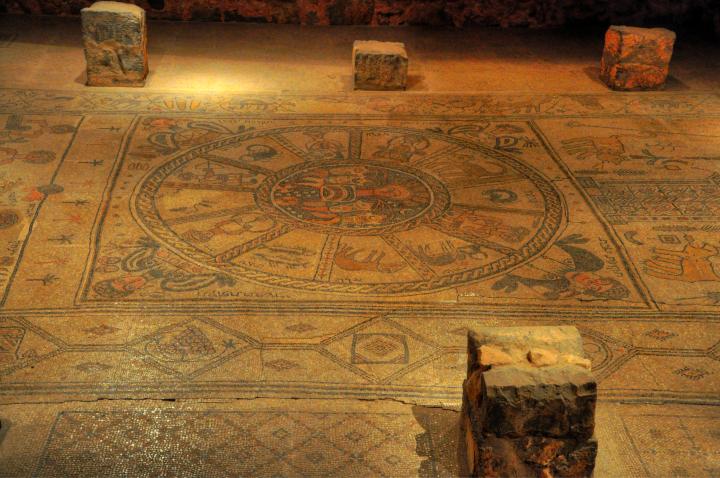 The mosaic section in the panel below the zodiac illustrates the Biblical story of the sacrifice of Isaac by Abraham. This is also common to other synagogue floors.

The two young men depicted on the left were part of the story,  when Abraham told his men to wait with the donkey, as seen in this painting (Genesis 22:16-17): “And Abraham said unto his young men, Abide ye here with the ass; and I and the lad will go yonder and worship, and come again to you.” On the right side is a part of the scene of Abraham and Isaac at the place of the altar, with their names in Hebrew (Isaac, Abraham). In the center is a lamb that replaced Isaac as a sacrifice (Genesis 22: 13): “And Abraham lifted up his eyes, and looked, and behold behind him a ram caught in a thicket by his horns: and Abraham went and took the ram, and offered him up for a burnt offering in the stead of his son”.

Under the illustration are two inscriptions. The upper Greek inscription (5 rows) names the artists, while the lower Aramaic inscription (7 rows, partially damaged) names the donors and describes the time of the mosaic’s commissioning (Justine). 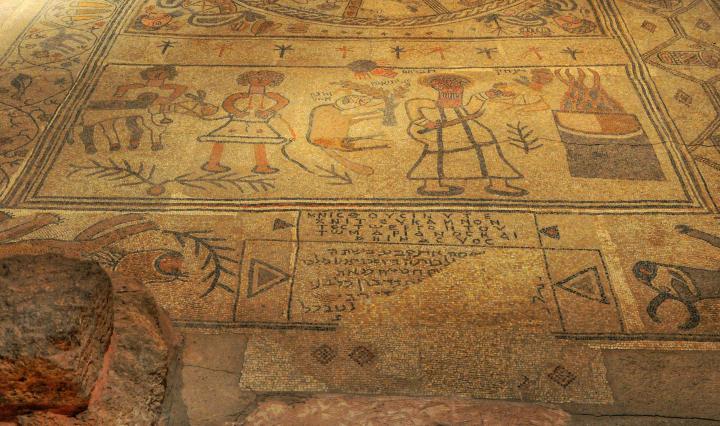 The paintings look naive and primitive. If compared to the Zodiac mosaics in Hammat Tiberias or Sepphoris, they look like a they were copied from these synagogues. However, they do present a magnificent and colorful setting for the synagogue.

Makuya (Japanese for Mishkan – the Holy Tabernacle – God’s dwelling place) is a Japanese Christian religious movement which identifies intensely with the state of Israel and its people. It was founded in 1948 by the late professor Ikurō Teshima (1910-1973).

A charming Japanese garden is located on the highest point in Kibbutz Hefzi-Ba, close to the cliffs of Mt. Gilboa, and is open to the public. It was planned by the Makuya’s founder as a symbol of Japanese culture and appreciation to the Israeli pioneering. 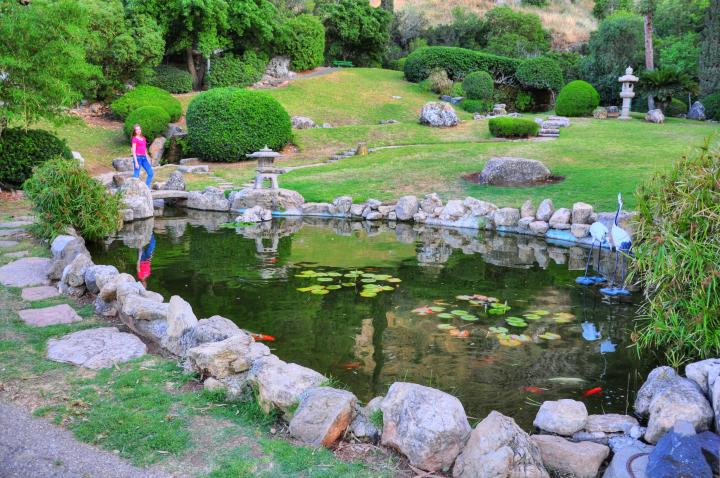 Built in 1975, the garden was constructed in the spirit of the Biblical prophecy (Isaiah 41:18-20): “I will open rivers in high places, and fountains in the midst of the valleys: I will make the wilderness a pool of water, and the dry land springs of water. I will plant in the wilderness the cedar, the shittah tree, and the myrtle, and the oil tree; I will set in the desert the fir tree, and the pine, and the box tree together: That they may see, and know, and consider, and understand together, that the hand of the LORD hath done this, and the Holy One of Israel hath created it”.  Indeed, this garden, and the people of Israel, materializes this prophecy. 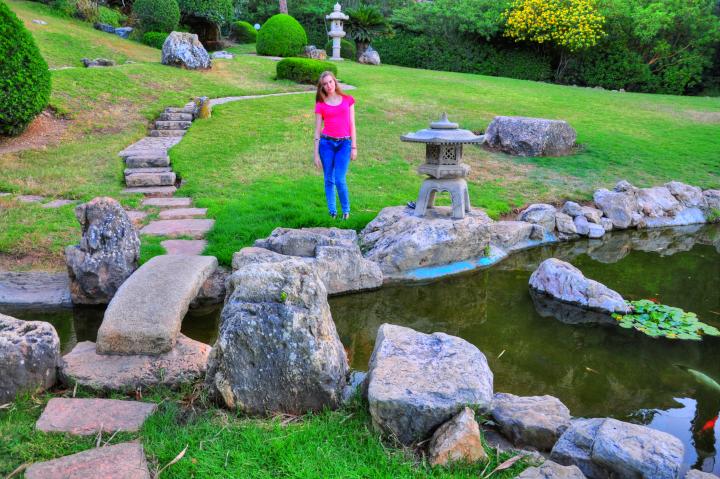 From the  garden are great views of the area, since the garden is located at the highest point in the Kibbutz.

In the background of the photo below you can see, behind the bushes, the southern side of Ramot Naftali (Naphtali heights)  and the fish ponds in the valley of Harod.

Note that this garden is on private property of the Kibbutz. Visits are required to be coordinated with the public relations person in charge of tours (see links for details). 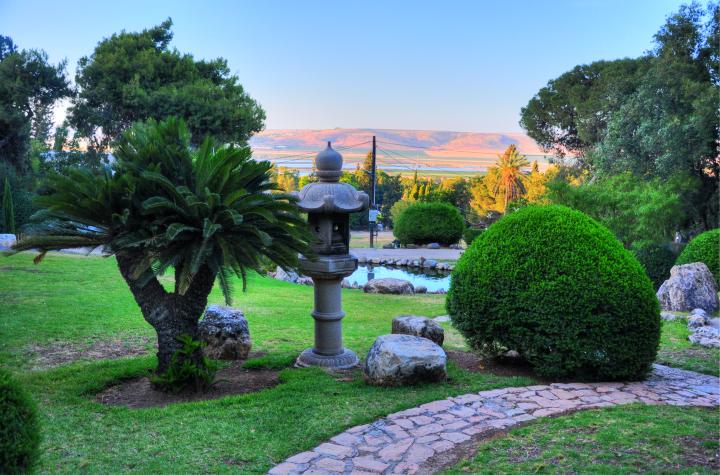 In a small cave above the garden, embedded into the cliffs of Mt Gilboa, the Makuya have a private praying shrine. This cave is a Roman/Byzantine period cistern, which supplied water to the village. 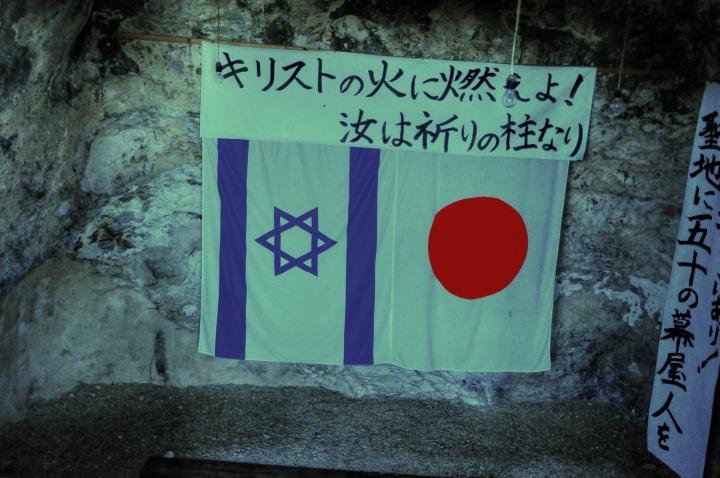 The Makuya movement sends its youths to Kibbutz settlements in Israel, and their primary stay is in Kibbutz Hefzi-Ba, where they have a Hebrew learning center (Ulpan). The Japanese youths are warmly accepted and hosted by the members of the Kibbutz. Webmaster Rotem’s Uncle Ronnie and Aunt Aviva, who are members of the Kibbutz, frequently invite their “adapted” Makuya youths to their home. They, and other youths of Hefzi-Ba, were invited to participate in the summer of 2010 to the Makuya international conference in Kumamoto, Japan, and to a special bi-national concert in Tokyo (picture below: singer Hanan Yovel; ambassador  of Israel and his staff; Makuya member) . 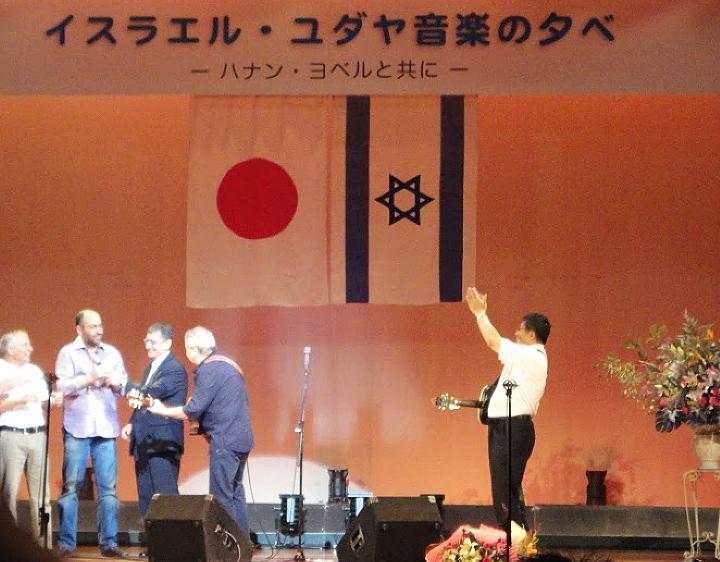 Note that are places in Israel are named Hefzi-ba, such as near Hadera.